Würzburg, Germany: the most detailed and comprehensive guide to the city, the main attractions of Würzburg with photos and descriptions, location on the map.

Würzburg is a city in Germany in the Bavaria region, located on the river Main. Is a free city and the center of the Lower Franconia. Würzburg is a picturesque city on one of the main rivers. Bavaria, which is famous for its historical heritage and architecture, art, wine and student life.

Würzburg is located on the slopes of the river Main, covered with forests and vineyards. Due to its climatic features, it is one of wine centers in Bavaria. The highest point of the city – 360 meters above sea level.

Würzburg has a temperate climate with warm summers and mild winters. The average temperature in the summer is 15-20 degrees, in the winter around zero. Most the coldest month is January. About 600 mm of precipitation falls annually. 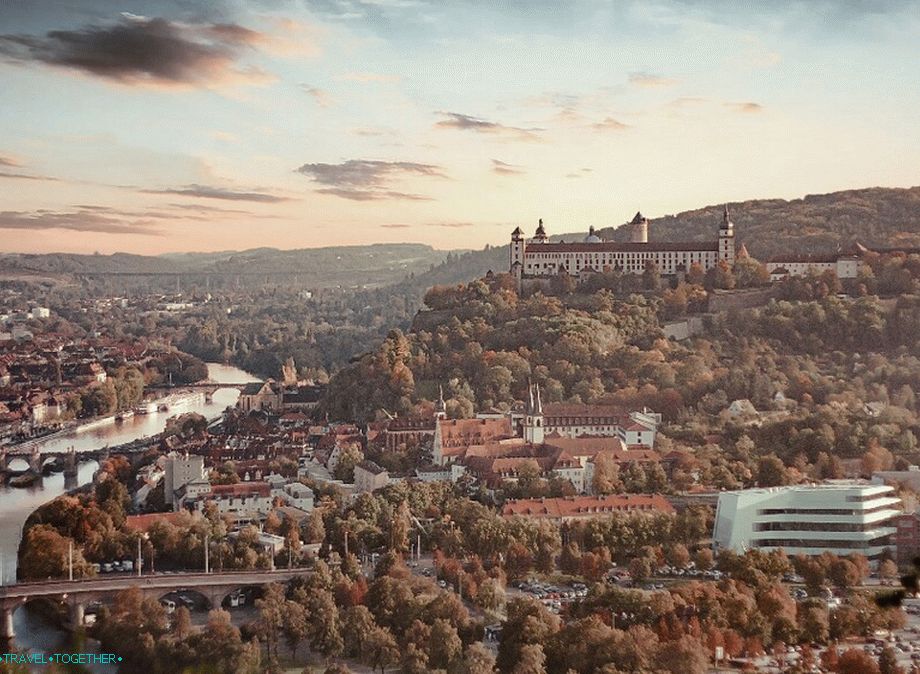 Würzburg is distinguished by good transport accessibility. Nearby The international airports of Nuremberg are located. Frankfurt am Main Munich. The city has a stable railway communication with other major cities of the region and the rest of Germany, including high-speed trains. The journey from Hamburg takes only 3.5 hours. Nearby are the autobahn A7 and A3.

The first written records of Würzburg date back to the beginning of 8 century. In the Middle Ages, the city became one of the most significant centers Franconia and one of the main cities of Bavaria with rich traditions winemaking.

Archaeological research has revealed that the first settlements on The territory of Würzburg dates back to the 10th century BC. and belong Celts. Already in the 7th century, these lands became the residence for the Franconian the prince. In the first half of the 8th century was formed bishopric

In 1127, a significant event was held in Würzburg – the first knightly tournament of medieval Germany. In 1156 here The wedding of Emperor Friedrich Barbarossa took place. 22 years later after this event, the emperor granted the title of duke to bishops Würzburg. 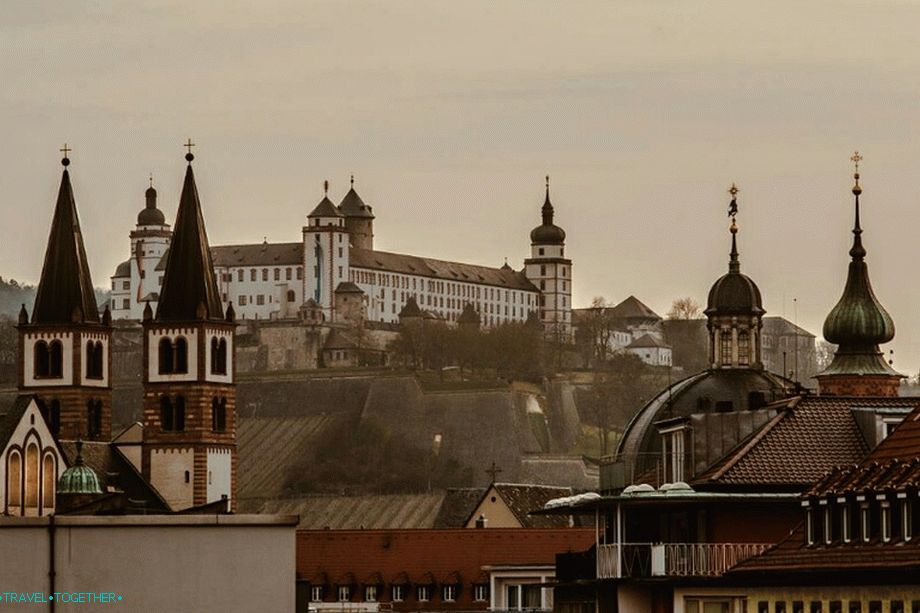 At the beginning of the 15th century, the University of Würzburg was founded – one of The oldest in Germany. Interestingly, it was closed after 25 years after the murder of the rector. Reopening occurred only at the end. 16th century. In the 30s of the 17th century in Würzburg, the Inquisition resulted in The witch hunt burned about 900 people.

In the first half of the 18th century, a bishopric was built in Würzburg. residence listed as a UNESCO World Heritage Site. After the Napoleonic Wars, the city became part of Bavaria and became center of Lower Franconia.

March 16, 1945 – one of the darkest pages of history. Würzburg. As a result of the air strikes of British aviation destroyed 90% of the old town. After World War II, urban authorities even thought of leaving the city and not restoring it as reminder of the war. But hard-working Germans are still careful restored the historic center in all its glory.

In Würzburg you can find a lot of food from expensive restaurants to cozy cafes. Certainly stands out the Schloss Steinburg restaurant located a couple of kilometers away northwest of the historic center over the vineyards and the river Mine Despite the fact that this institution is not cheap, you can enjoy not only delicious food, but also views of the fortress Marienberg. Among the institutions of the historic city center can recommend Altemainmuehle, Burgerspital, Juliuspital and Stachel. 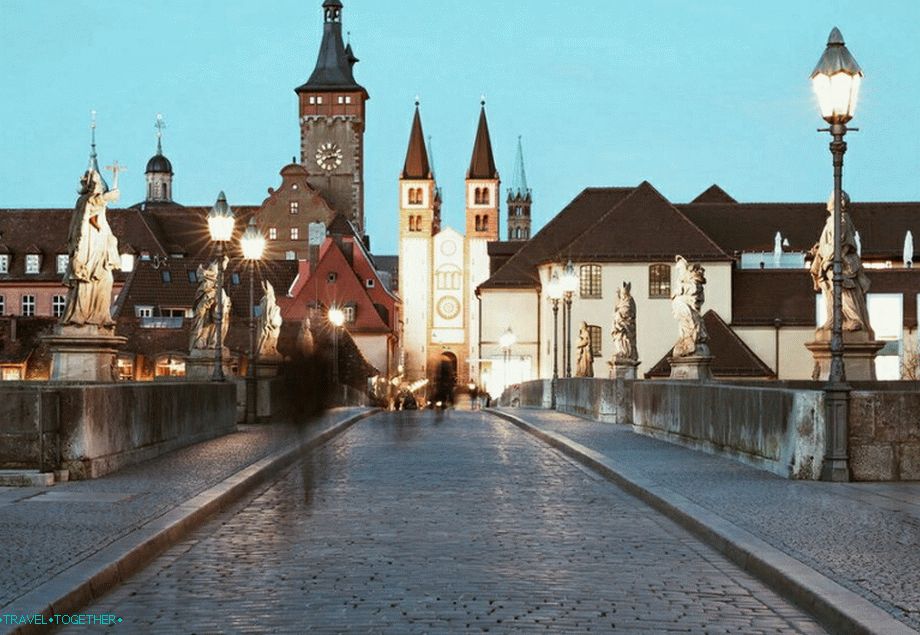 Since Vytsburg – student city. Here you can find many inexpensive cafes, most of which are located in southern part of the Sanderstrasse street.

Of the drinks you should pay attention to the Franconian wine, because Würzburg – one of the main wine centers in Germany. Also here, as in all of Bavaria, they brew great beer. Recommend try the wheat beer of the local brewery Würzburger Hofbraeu.

Founded in the 10th century, Würzburg may interest its rich historical heritage and interesting sights. Despite the destruction of World War II, The historic architecture of the city has been carefully restored. Centre Franconia and home to the mighty prince-bishops famous for Residence – one of the most beautiful palaces in Europe, a masterpiece Baroque and UNESCO World Heritage Site, ancient churches and ancient fortress marienberg. 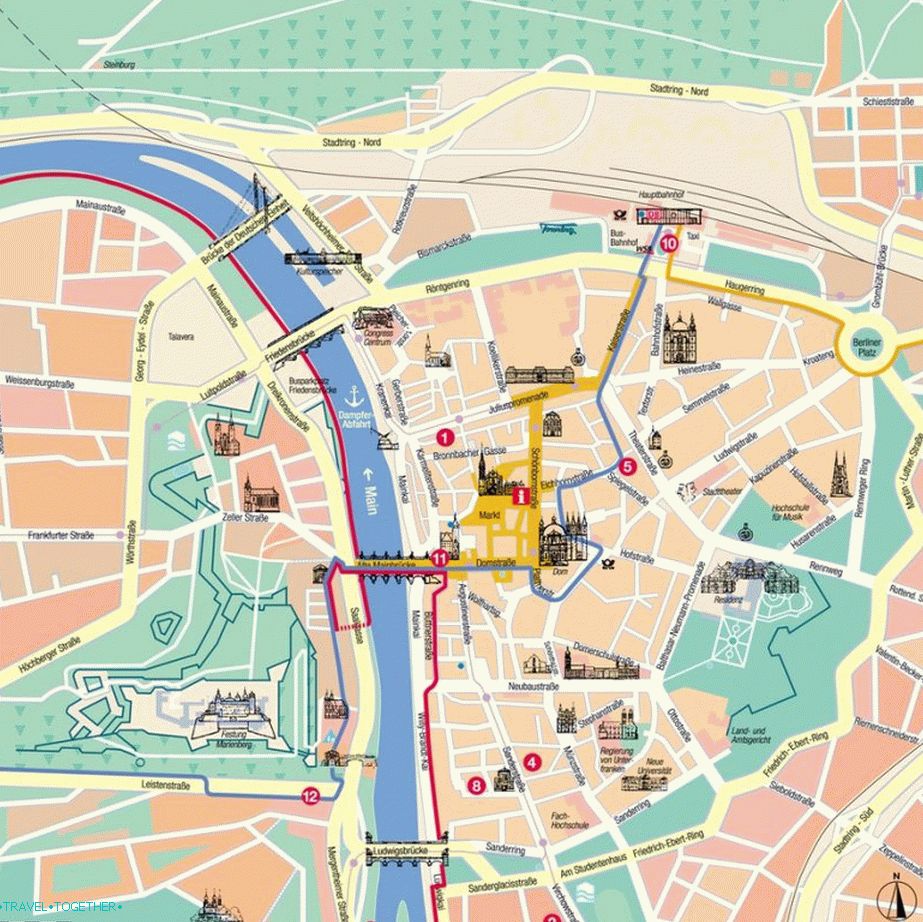 The residence is the main attraction of Würzburg the magnificent palace of the first half of the 18th century, listed UNESCO World Heritage sites. The residence is one of the most famous baroque palaces of Europe, designed by architect Neumann and frescoes of the famous Venetian Tiepolo.

The palace is famous for its magnificent staircase and frescoes above it. The residence consists of 3 wings and includes about 300 rooms. Also Here is a museum of Bavarian painting. Entrance to the Residence paid and is 7.5 euros. Behind the palace are picturesque the gardens. Entrance to the gardens is free.

Fortress Marienberg – one of the symbols of Würzburg, the ancient fortress located on a hill above the river Main. This is one of the oldest places. city, inhabited during the time of the Celts. At the beginning of the 8th century here a church was built around which steel was built in the 13th century Fortifications, extended and modernized in the era Renaissance and Baroque.

In addition to the Museum of Franconian art here you can look at church of sv. Mary is one of the oldest round churches in Germany, dungeon Tilman and enjoy the stunning views of the city. entrance in the fortress Marienberg paid. The cost is 3.5 euros. TO Unfortunately, the war has almost destroyed the precious collections. fortress.

Old Bridge is another great attraction. Würzburg. The stone bridge over the river Main was erected in the period from 1473 to 1543 and connected the old town with the fishing quarter on left bank. It was built on the site of an ancient Romanesque bridge 12 century. 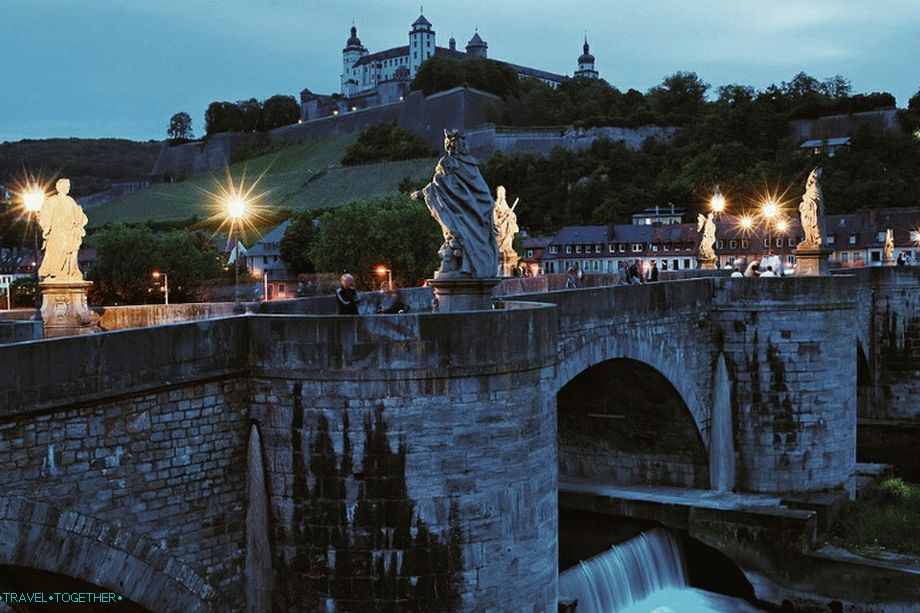 In the 18th century, the bridge was decorated with 12 sculptures. From here it opens stunning views of the fortress Marienberg, the city and vineyards. It is only pedestrian. Reminds the famous Charles Bridge in Prague and the old bridge over the Danube in Regensburg.

Würzburg is also famous for its ancient churches. the main thing religious building of Würzburg – the cathedral of st. Kiliana 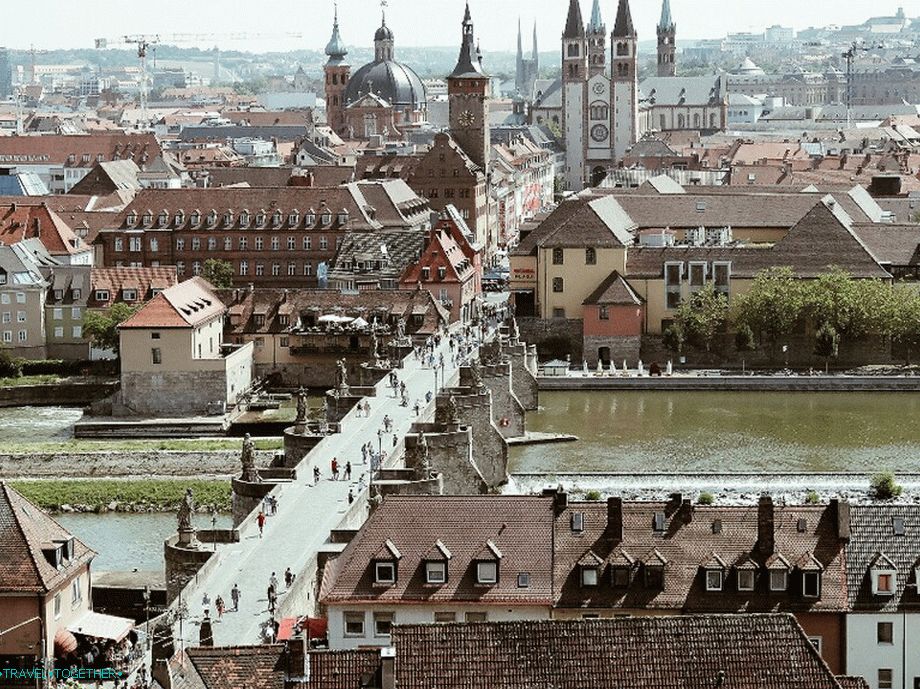 This is Germany’s fourth largest Romanesque cathedral with numerous artifacts of the past. Milestones of construction Dated 11-12 centuries. The eastern towers were built in the 13th century. The interior received rich baroque decorations in the early 18th century. TO Unfortunately, the cathedral was significantly damaged in 1945. Some part of his heritage has been lost or damaged. Restored to 1967 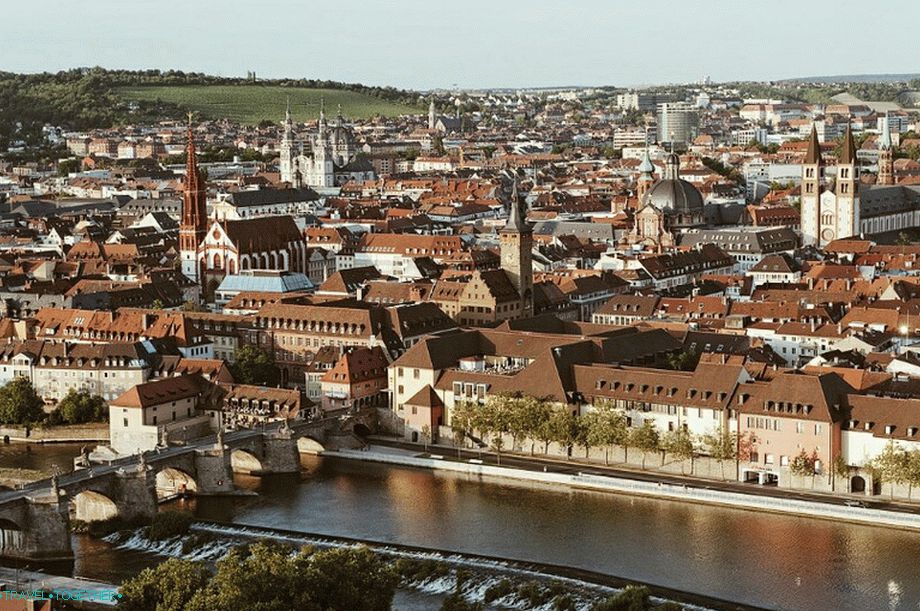 Cappella Church is a magnificent baroque church built Balthazar Neumann in the middle of the 18th century. The interior of the church is amazing magnificent frescoes and stucco works. Overcoming 352 steps to viewing platform, you can enjoy the magnificent panorama of the valley the river Main and the fortress Marienberg. 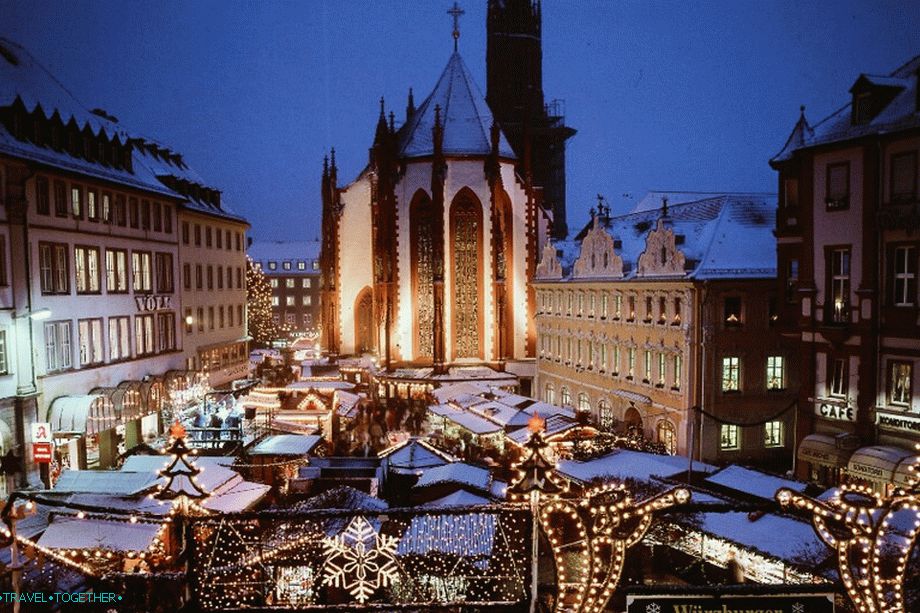 Capella St. Mary – the magnificent late Gothic church 14 century. The tower was built at the end of the 15th century. In the church you can look at the beautiful altar, there are also tombs famous franconian knights and famous architect Neuman. 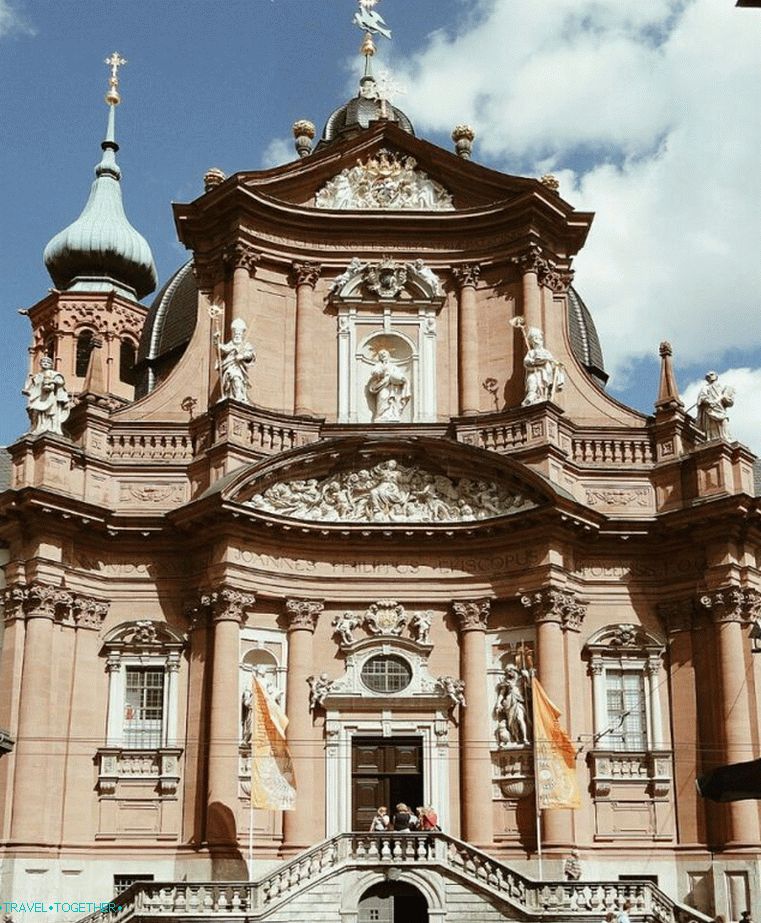 Neumünster – Romanesque Cathedral of the 11th century, erected in place death of sv. Kilian and his associates in the 7th century. Currently is a massive domed building with baroque facade of the early 18th century. 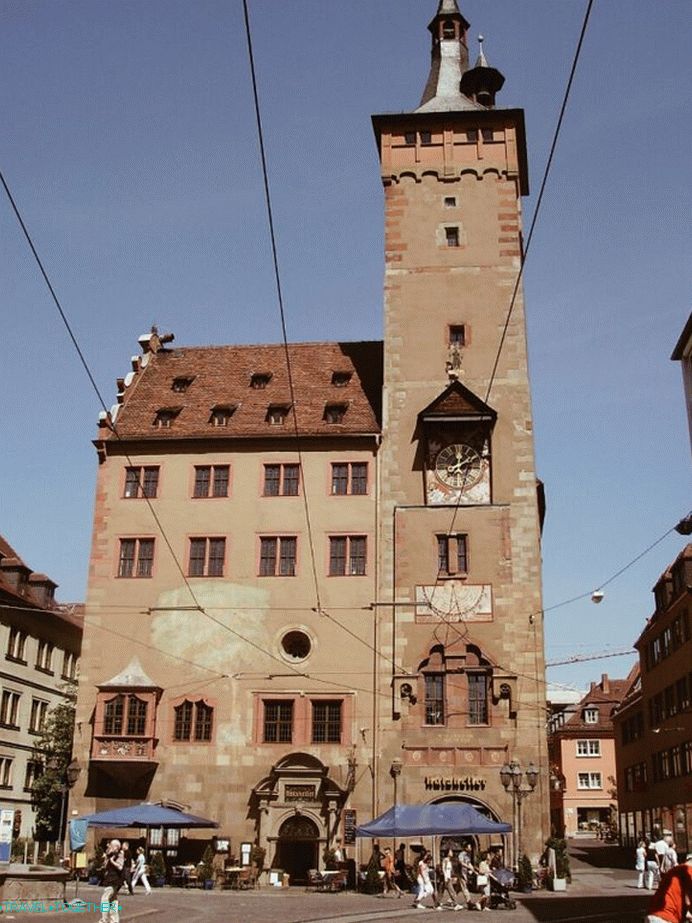 Town Hall is a whole complex of buildings of different architectural styles. from gothic and baroque to neo-orennes. The oldest part of the building dates back to the 12th century. It is an architectural monument of Bavaria.

Würzburg on the map of Germany