Vysehrad (Prague) – the most detailed information about the fortress with a photo. The main attractions of Vyšehrad, how to get there location on the map.

Vysehrad is an ancient fortress in the south of Prague, located on the high hill above the Vltava and the historic district of Prague 2. Fortress was erected in the 10th century. Vysehrad is one of the historical centers of the Czech state, having an important role and importance in history of Prague and the Czech Republic. 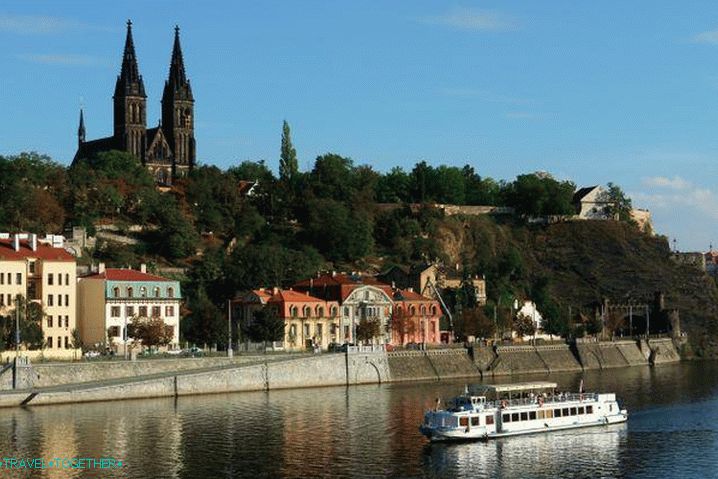 In the photo – Vyšehrad panorama from the shore of the Vltava

Vysehrad is often undeservedly deprived of the attention of tourists. Most tourists visit Prague Castle, historic districts Prague – Stare Mesto and Mala Strana. Although in Visegrad there is something look is the oldest rotunda of Prague, the most beautiful gothic the temple, the old cemetery and the stunning view of the city.

Visegrád’s history is closely related to the development of Prague and the whole Bohemia. The basis of Vysehrad is traditionally associated with the prince Krokom, the father of Princess Libuse. A huge rock hanging over Vltava, was settled in ancient times and became the subject numerous legends. It is here that according to legend, Princess Libuse predicted the flourishing and world fame of Prague.

The first reliable evidence of the existence of a fortress Visegrad Hill dates back to the middle of the tenth century, when The fortress appeared on the coins of Prince Boleslav II. Flourishing Vysehrad was associated with the transfer of the royal residence of Prague Castle. Vysehrad was surrounded by powerful walls, fragments of which are preserved to this day. 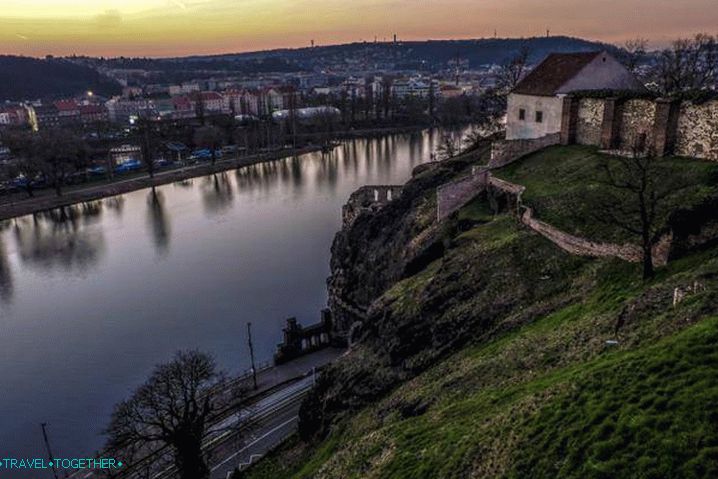 In the photo – view of the Vltava from Vyšehrad

Vyšehrad flourished until the mid-12th century, when Vladislav II moved the royal residence back to Prague Hail.

A new breath gained strength under Emperor Charles IV, who saw in the neisbol of Czech history and the oldest the residence of Přemyslovic, of which there was his mother.In 1348 the year he founded the New City and Vysehrad joined its walls. For two years fortificationsVyshgrad were expanded, strengthened and complemented by massive towers and by the gate.

The development of the fortress continued until 1420, until it was captured by the Hussites and plundered. After that, they began to settle here. poor artisans. 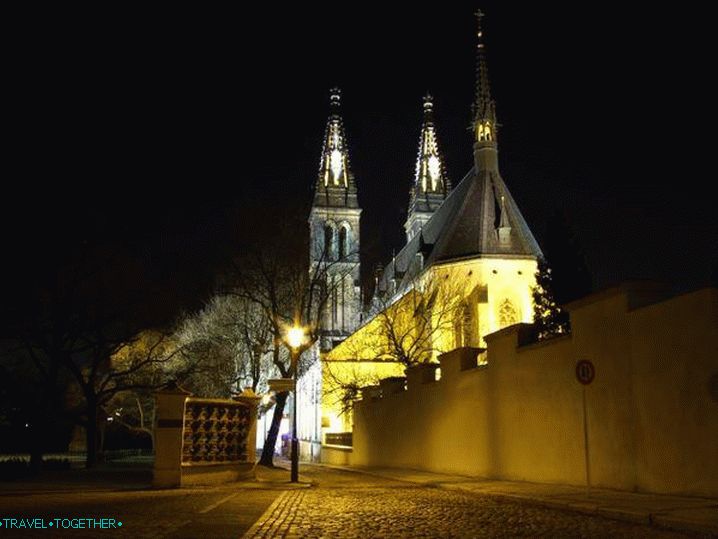 In the photo – Vysehrad at night

After 1450, Vyshegrad was divided into two parts: Lower Town occupied the area of ​​the former castle, and the Upper city – the area around churches irotonda. Vineyards were planted on the hillsides and gardens.

This continued until the Thirty Years War. In 1653 Vysehrad again began to strengthen. In 1727, new ones were completed. fortifications. At the same time building fortifications here lasted almost until the 19th century.

Vysehrad as a symbol of the Czech Republic

In the second half of the 19th century, strategic military significance Vysehrad retreated into the background. Vysehrad began to play big patriotic meanings and became a symbol of the early period history of the Czech people. At the end of the nineteenth century great people of the Czech Republic were buried here. 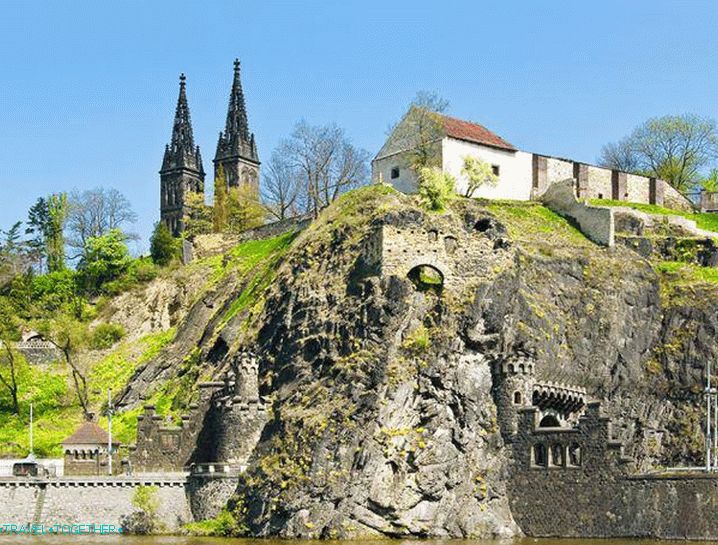 In the photo – view of the fortress Vysehrad

Many legends and traditions of the Czech Republic were also associated with Vyshegrad. and Prague. This is a magical and mysterious place where it is pleasant to walk, where legends and history intersect. Vysehrad is a place which is firmly established in the history of Prague and the entire Czech people.

Vysehrad is a very interesting place, here you can look at The following attractions:

Basilica of Saints Peter and Paul

The Basilica of Saints Peter and Paul – the main architectural dominant Vysehrad Beautiful neo-gothic cathedral, built in the 11th century. Inside you can get completely free and admire it interiors, there are also many relics of history and religion.

In the photo – Basilica of Saints Peter and Paul

The temple is a three-nave pseudo basilica in Neo-Gothic style with chapels and sacristy in the side aisles, deep closed presbytery and two symmetrical towers along sides of the main facade. The neo-gothic facade of the basilica is richly decorated among other things, portals and turrets.

The glass stained glass windows of the temple were designed by František Sequence. The main altar of the basilica was carved in the years 1884-1889 carver Joseph Grubesh designed by Yosef Motsker. On the altar depicts the holy apostles Peter and Paul and saints Cyril and Methodius In the photo – Basilica of Saints Peter and Paul

In the first chapel on the right is a stone sarcophagus in the Romanesque style of the twelfth century. Legend has it that there are remains of the holy Longin, but actually one of the representatives was buried in him dynasty Přemyslovich. As a result of archaeological research in this chapel was found the image of the Virgin Mary with the baby Jesus, dating from the reign of Charles IV (1346-1378).

In the second chapel on the left is the altar of Czech patrons, decorated at the beginning of the 20th century by art Nouveau carver Jan Kastner. In the third chapel on the right on the altar between the images of St. Wenceslas and St. Ludmila is the famous mural of the Virgin Mary of the Rain – monument of Gothic painting of the middle of the XIV century. The panel was kept in the collections of the emperors Charles IV and Rudolph II. This image is probably was brought by Charles IV from Italy, where his coronation took place, and in 1606 the panel was presented to the Church of Saints Peter and Paul in Visegrad. According to legend, the image of the Virgin Mary of the Rain was written by the evangelist Luke himself. In times of drought to the image of the Virgin Mary processions came in pleading for rain. 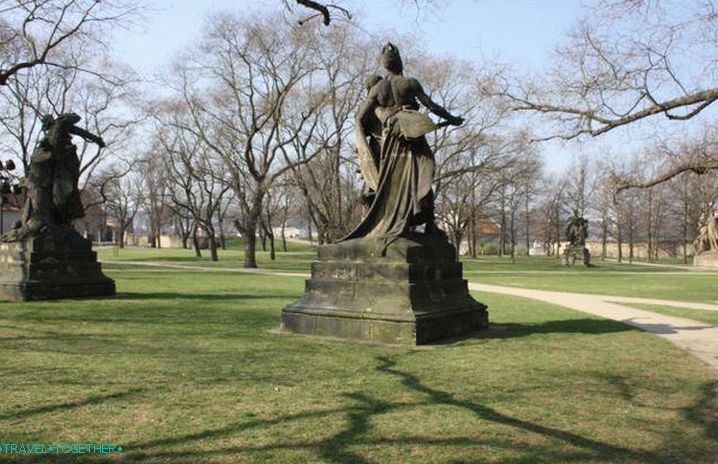 In the photo – a small park with sculptures basilica

In the Shantsovo Chapel there is a miraculous polychrome statue. Virgin Mary and Child, carved from wood in 1725 in style Baroque carver Shimon Thaler. The statue is located on the altar under the canopy between the smaller statues of Saint Cecilia and St. Catherine, created in the XIX century. In the eastern wall of the chapel there is a niche in which a glass casket with bones is placed the alleged remains of members of the Przesmyslovich dynasty, graves which were ravaged and bones scattered throughout the cemetery in 1420 year (source Wikipedia).

Vysehrad cemetery – the cemetery at the Basilica of St. Peter and Pavel, in which about 600 famous Czech people are buried. The tombstones of the graves were created by the best sculptors of tomb is located in the eastern part of the cemetery Slavin with a monument in the form of a winged figure. On the photo – Vysehrad cemetery

Rotunda of sv. Martina is a small historic building on Visegrad, dating from the beginning of the 11th century. It is considered one of the oldest preserved buildings of the city. 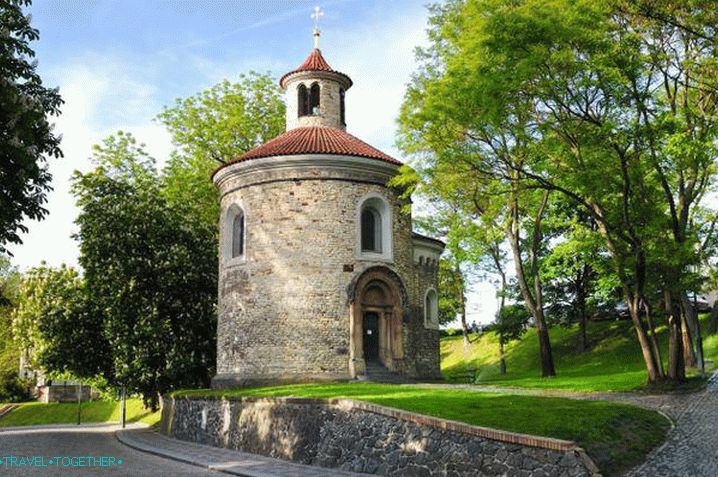 On the photo – Rotunda of sv. Martina

The intricate system of casemates and underground tunnels arising in 17-18 centuries in connection with the construction of new baroque fortifications The largest underground space is called Gorlitz. 6 original statues are exhibited here. Charles Bridge. 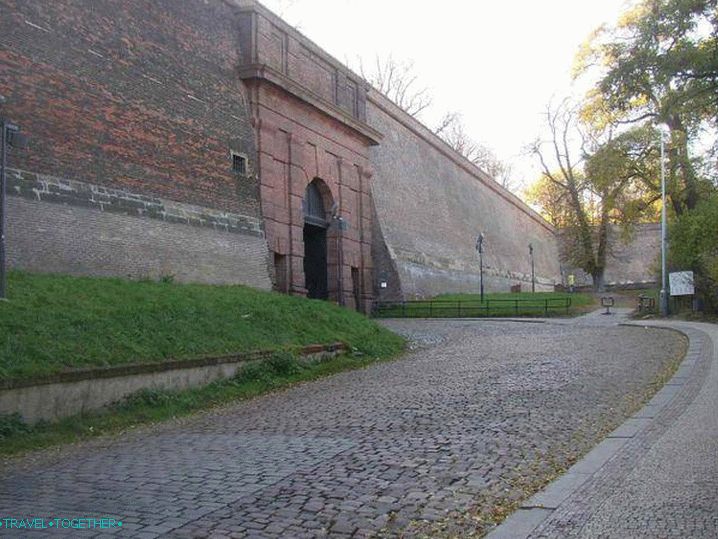 In the photo – one of the entrances to Vysehrad

The gothic crypt is a fragment of one of four palaces built during the reign of Emperor Charles IV. The palaces were destroyed and looted by the Hussites in 1420. Beside is a summer scene. Vysehrad on the map of Prague

MAGAZINE
Most loyal visa centers for Italians, French, Greeks and Spaniards. Speaking of the French

MAGAZINE
Castle Loket – detailed information with photos, mode, the location of the castle Loket
Leave a Reply Cancel reply
Recent Posts
Categories
Recent Comments
Archives
This site uses cookies to store data. By continuing to use the site, you consent to work with these files.