Verona (Italy) – the most detailed information about the city with photos. The main attractions of Verona with descriptions, guides and cards.

Verona is a city in northeastern Italy on the Adige River in area of ​​venice. This is an ancient corner of Veneto, which is known as one of the most romantic places in the world thanks to the tragedy “Romeo and Juliet “by William Shakespeare. Verona is two thousand years of history who froze on the streets of the city: an ancient Roman amphitheater, medieval churches and numerous cultural monuments. it a place that is literally saturated with romance and centuries-old past with the historical center that is the object of the World UNESCO heritage.

Verona is located at the foot of the Lessian Mountains 30 km from the lake Garda and 105 km from Venice. The city is crossed by the Adige River, which It is part of the Po Valley. The climate is temperate continental. Summer is dry and hot, winter is cool enough with frequent fogs, small frosts and rare snow. In ancient times, Verona was the nodal point of all land and water transport systems of northeastern Italy. Here Four consular roads intersected: Via Gallica, Via Claudia Augusta, Vikum-Veronenzia and Via Postumia.

The exact date of the founding of a settlement on the site of Verona is not exactly known. Perhaps there was a village of Etruscans or Euganes (local tribe). It is known for certain that in 89 BC Verona became a Roman colony. At this time, the city is actively growing, built and developed. In the 3rd century the city was used as a fortress. in the way of the barbarians. At the beginning of the 5th century in the vicinity of the city of Goths Alaric leadership suffered a defeat. The period after the collapse of the Roman Empire (5-7 century) turned out to be quite saturated. In the 6th century, the Goths were defeated by the troops of Byzantium, the Byzantines lost to the Lombards, who were defeated by the Franks in the 8th century. In the Middle Ages, the city was used mainly as a fortress. Before 1405 Verona was influenced by different clans: Romano, Visconti, Carrara, until it became part of the Venetian Republic. Under authority Venice city remained for 4 centuries. 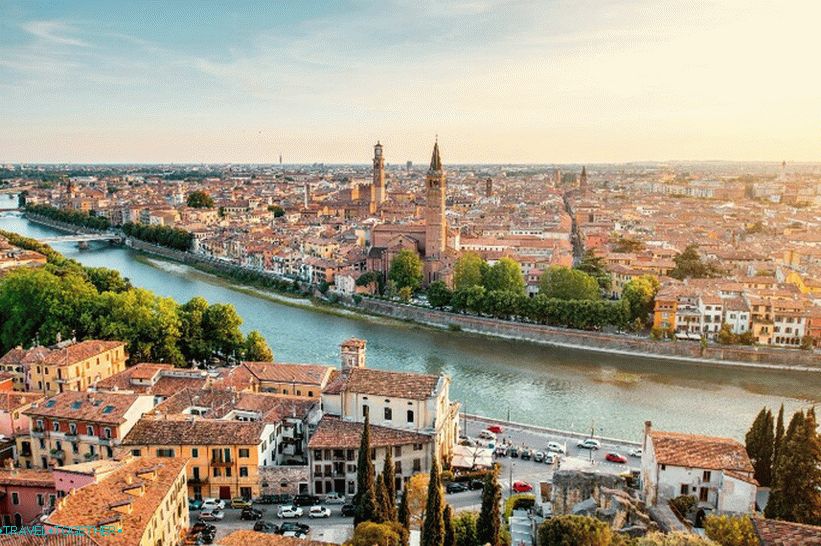 At the end of the 18th century, Verona was captured by Napoleon. After The Congress of Vienna, the city became part of the Habsburg Empire. In 1866 Verona became part of Italy. In 1882, what happened here severe flooding. The Adige River overflowed and flooded. most of the city. During World War II, the city is somewhat once bombarded.

Verona has its own airport, which is located in 12 km from the city. You can get to the city by bus, which goes to the main train station. Number of destinations and carriers are quite extensive: Moscow, Frankfurt, Munich, Paris, Rome, Madrid, Brussels, Palermo, London.

Verona is located at the crossroads of two highways. From North south – A22 (Modena-Brennero), east-west – A4 (Milan-Venice).

Via Mazzini is the main shopping street in Verona, which located between the squares of Bra and della Erbe. Here you will find a lot expensive brand stores. Many different stores are located on Corso Porta Borsari. On Corso Santa Anastasia you can buy antiques. Verona is a city with a rich and long history. Here you can find how sights of the ancient period and Middle Ages. Arena – the main attraction of Verona and one of The largest amphitheater ever built by the Romans. Arena was built in the 1st century for gladiator fights. Elliptical shape designed to accommodate a large number of viewers and had good acoustics (amphitheater can accommodate about 30,000 people). Arena was built outside the walls of the Roman city to avoid the crowds in its center. Most of the outer ring of the amphitheater was damaged during the earthquake of 1117, but the inside well preserved. Also the outer ring was destroyed in the 5-6 century for the construction of a second city wall. In the Renaissance Arena dismantled for the construction of new buildings. In the Middle Ages here numerous shops were located. Now summer is held here. opera seasons. Juliet’s house and her balcony

Juliet’s house is a symbol of Verona, a place of attraction for huge crowds. tourists. Presumably the place of the famous scene from the well-known tragedy of genius Shakespeare. In fact, the house has no relationship to Juliet. Although the building is old (13th century). Balcony was added in 1936 and declared “Juliet’s home” for attract tourists. What successfully copes. Usually small the courtyard is filled with couples in love who are photographed on on the balcony, leave notes on the famous wall and touch the chest sculptures. The tomb of Scaligers is a monumental burial complex in the Gothic style of the della Scala family, intended for storage tombs of its most prominent representatives. The tomb is enclosed in wrought iron fence. The oldest sarcophagus dates back to the 14th century. Erbe – the oldest square of Verona, the heart of the ancient Roman cities. Along the perimeter of the piazza is surrounded by palaces (palazzo). On the square also installed a fountain. From historical buildings follows highlight: Lamberti is Verona’s tallest tower, completed in the 15th century. The construction of the tower dates back to the 11th century. Its height is 84 meters. To go upstairs you need to overcome 238 steps. Although the tower has an elevator. In 1295 the tower was two bells are installed: the “Marangan” bell gave signals about end time for artisans or alarm in In case of fires, the “Reno” bell collected the city council or called to arms in case of danger to the city. The clock on Lamberti was established at the end of the 18th century. Gardello – brick tower on the left side of Piazza Erbe, which is often called Sentry. The tower was built in the 14th century. Duomo – the cathedral, built in the 12th century on the site old church of the 8th century, destroyed during the earthquake. Duomo It has an ornate marble Romanesque facade, alongside is attached Bell tower. The interior contains many works of art. Santo Stefano – is one of the oldest early Christian Churches of Verona, founded in the 5th century. The church kept precious 14th century paintings and works of Renaissance artists Karoto, Farinati and Brusasorzi. San Giorgio – a church with an impressive dome (designed by Michele Sanmicheli dominates on the Adige. Romanesque tower was shortened to make room for the dome, and the interior of the church contains precious works of art, among which The Baptism of Christ by Tintoretto, the work of Domenico and Felisi Brusasorzi, Karoto and Farinati. 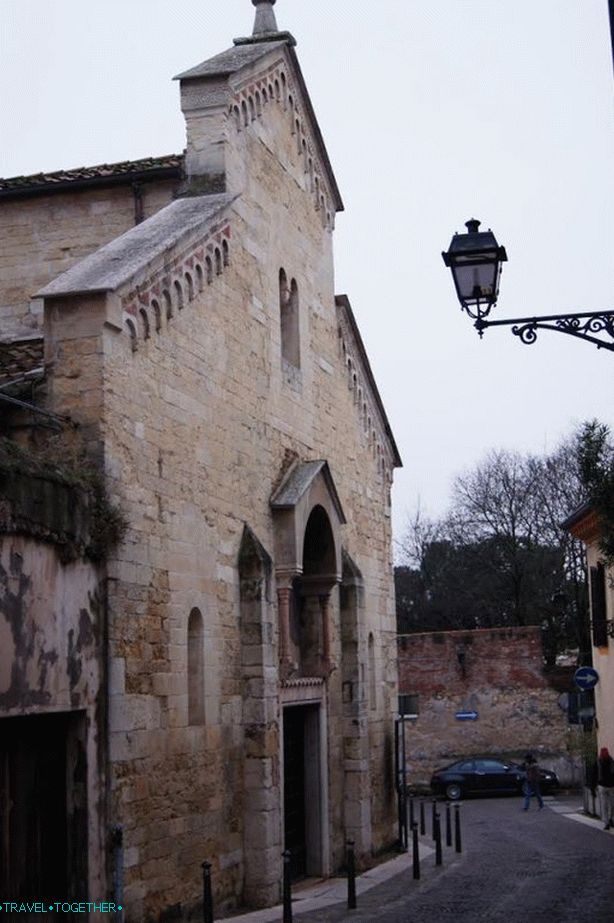 San Giovanni is a church founded in the times of the Lombards. It was probably erected on the site of a pagan temple dedicated to cult of the sun. Destroyed during the earthquake of 1117. Was completely rebuilt in a magnificent romance style and is one of his best samples. San Zeno – perhaps the most beautiful church in Verona with the richest internal content. Located slightly off center cities 15 minutes walk from Castelvecchio. Dedicated to St. Zeno – the patron saint of Verona. Romanesque basil restored after earthquakes in 1117 on the foundations of a 4th or 5th century building. Notice the exterior facade with a large rose window underneath. named “Wheel of Fortune”, marble bas-reliefs on both sides the porch, the famous bronze doors, the bell tower and the abbey tower. Inside the church you can see frescoes of the 13th and 14th centuries, baptismal font, ribbed ceiling, crypt where they are kept the remains of San Zeno, the statue of the saint. Piazza Bra – the central area of ​​modern Verona and the starting Point to explore the old city. On the west side of the piazza you can see the “Portoni della Bra” gate, which is the entrance on the square and the majestic palace. South facing Neoclassical palace Barberini. Castelvecchio is the most impressive medieval building in Verona. This brick castle was built on the banks of the Adige at 14 century. Now in its walls is a museum. The Scaligero Bridge is a beautiful brick bridge over the Adige River, which links Castelvecchio with the opposite bank. Peter Bridge was built in the 1st century. Repeatedly destroyed and recovered. The original Roman arches can still be seen. on the left bank of the Adige. Also located here are the remains of the Roman walls.

Piazza Signoria – the most elegant square of Verona. In this square you can admire many palaces: Palazzo della Rajione and Cortila Mercato Vecchio, Palazzo del Capitano and Palazzo del Guando, Loggia del Consiglio and Domus Nova. In the center located sculpture of Dante. In a small dark crypt under the monastery of San Francesco al Corso You can find a red sarcophagus in which, as they say, buried Juliet. Romanesque Theater – an ancient Roman theater built in the 1st century ad. In the archaeological museum of the theater are important artifacts and finds of the Roman past of Verona. Borsari – the ancient gate, which was the entrance to the city. Today only the facade is preserved. Its decorative elements were added later. Port Borsari was, in fact, a fort with a lookout. towers, courtyard and garrison. The Lion’s Gate is one of the oldest Roman monuments. Verona. They are stamped on the inscription relating to the year 49 AD.

Verona on the map of Italy