Valladolid (Spain) – the most detailed information about the city with a photo. The main attractions of Valladolid with a description, guides and maps.

Valladolid – a city in the north-west of Spain in the autonomous The community of Castile and Leon. It is one of the largest cultural and economic centers of the country, the capital of an outstanding wine-making and gastronomic region. Valladolid is a university city which from the 13th to the 17th century served as the residence of the kings of Castile and Spain The historic center includes ancient sacral buildings, historic buildings and palaces.

Valladolid is located on the Pisuerga River at its confluence with Esgeva River in the northern part of the Iberian Peninsula. City located on the Northern Plateau, which is a plain with small hills. The climate is continental Mediterranean. The summer is hot and dry, and the winter is quite mild with rare frosts. For the year falls just over 400 mm of rain. The best time to visit is April-June and September October.

The first mention of Valladolid dates back to 1074, when king of leon alfonso vi instructs to populate the territory of the river valley Pisuerga There are two versions of the founding of the city. The first is Valladolid was founded by the Romans, the second – the Arabs, who gave him the name “city Valida”.

At the beginning of the 13th century, the king of Castile transported his court here. In 1346, Valladolid received the right to establish its own university. AT 1461 a strong fire almost destroyed the city. After him Valladolid was rebuilt. In 1506, the famous died here. navigator Christopher Columbus. In 1469, the marriage of Princess of Castile and Prince of Aragon, which led to the unification of Spain. In 1520, during the uprising of the Castilian cities, Valladolid becomes northern capital rebellion. In 1521, the rebels were defeated. The capital of Spain remained until 1561, until it was affected by another major fire.

The city was badly damaged during the wars with France. Many landmarks and architectural monuments were damaged or lost.

The airport is located 10 km from the city. The best way to get to Valladolid – first fly to Madrid, from where regular ones go the trains. High-speed train from Madrid to Valladolid overcomes distance between cities in 1 hour. There is also a regular bus and train connections with other major cities.

In Valladolid you can buy the best wine in Spain and some typical sweets. In the city center there are several shopping centers and many different shops. The region is famous for its pork and lamb dishes. there is restaurants serving exclusively lamb dishes. Typical dishes: garlic soup, roasted lamb, tortilla with chorizo, portillo. As a side dish often serves asparagus, potatoes and other vegetables.

The main square is the very center of Valladolid, located in old town and headed by a statue of Count Pedro Ansureza. AT The Middle Ages in its place was a market and city gates. The strongest fire in 1561 significantly damaged the area and surrounding buildings. New Square was built under Philip II. it was the first geometrically regular square in Spain to which led by ten streets and lanes. The main square has become a model for squares in other cities of the country and South America. Here are held numerous seasonal events and Christmas markets. Campo Grande Park is a green corner right in the center of Valladolid. It was founded at the end of the 18th century and covers more than 100 thousand square meters. Great place for walking and relaxing from city ​​bustle. Peacocks walk in the park, there is a fountain, a reservoir. Church of sv. Pavla is the only building left from Old Dominican monastery, founded in 1270. The existing church was built between 1445 and 1468 over the years, later expanded and restored. Church of sv. Paul’s one of the most emblematic sacred structures of Valladolid with beautiful Renaissance façade and real stone altar The interior of the church is in the late Gothic style. Church of sv. Mary “Antigua” – one of the oldest buildings Valladolid, founded in the 11th century on the foundations of Roman buildings. The oldest parts of the church (tower and arcade gallery on the north side) date back to the 12th century and belong to the Romanesque style. The rest of the temple was rebuilt in the 14th century on the initiative Alfonso XI, King of Castile, in the Gothic style. The building is a three-nave with three polygonal apses. Declared a national monument Spain 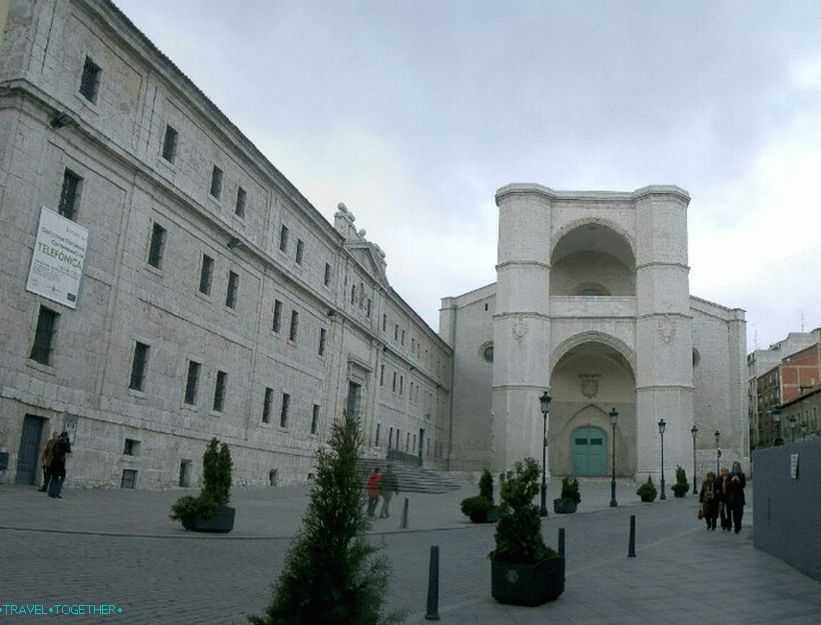 San Benito “El Real” – a church and monastery built on place of the old fortress. Fragments of medieval walls are still visible. here. The monastery was built on the initiative of Juan I gift to the order of the Benedictines. The church of San Benito has an outstanding monumental facade with two octagonal columns. After church confiscation of the monastery building was used as military barracks until 1965. Currently part of it used as a museum of modern art. Cavalry Academy – a beautiful 19th century building in style. noble palaces of the Renaissance. With its construction various materials were used, such as granite and gold sandstone from Salamanca, which was the reason for the beautiful polychromy. Now it houses a museum of paintings and sculptures. Seminary of sv. Gregorio is a historic building of the 15th century with beautiful facade, decorated with decorative and sculptural elements. Now the building houses the national museum. sculptures. Valladolid on a map of Spain