Valencia (Spain) – all about the city, the main attractions Valencia with photos and descriptions, location on the map, video.

Valencia is one of the largest and busiest cities Spain The second name of Valencia is the land of festive lights and colors. This city is located in the south-eastern part of Spain, on the Mediterranean coast. 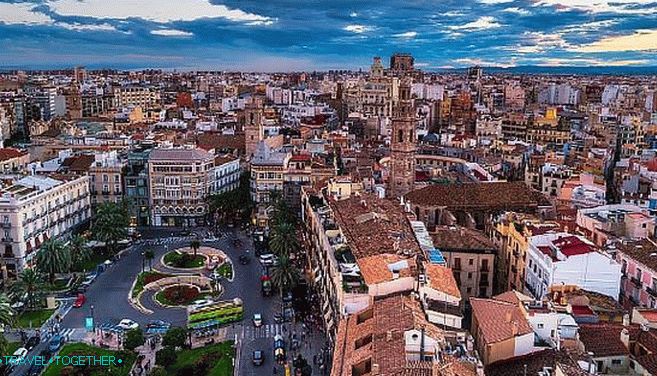 Also, Valencia has become a very popular tourist town. Holidays here have become a tradition for many Norwegians, Germans and the English. All fashionable Spanish resorts, such as Peniscola (Castellón), Benidorm (Alicante) and Gandia (Valencia), are here.

The climate in these places is the warmest and softest in Europe. Average The temperature does not fall below 18 degrees. Summer is very warm, winter – soft. Almost always in Valencia – the sun. Favorable time for rest it is accepted to call the period from the end of autumn to the beginning of spring. Family vacations in Valencia are not only a wide range. inexpensive and comfortable hotels, apartments (including cottages), but also an incredible variety of amusement parks. 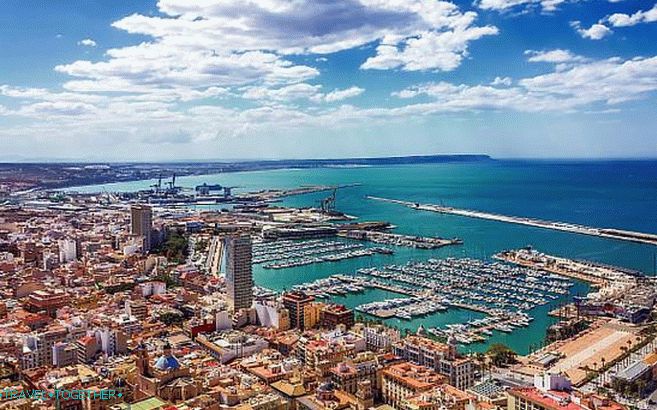 Activities include sailing trips, various walks, both riding and cycling. Also have several dozen different golf courses near all towns (Villarreal, Benidorm, Denia and others).

Many tourists do not come to Valencia because of the beaches, but to visit the famous castles in Alicante and Castellón, Valencia museums and cathedrals. Tourists have the opportunity to try rural holiday. Valencia also provides an opportunity to holidays with benefits (recreation and training): a combination of a beach holiday with Spanish courses. 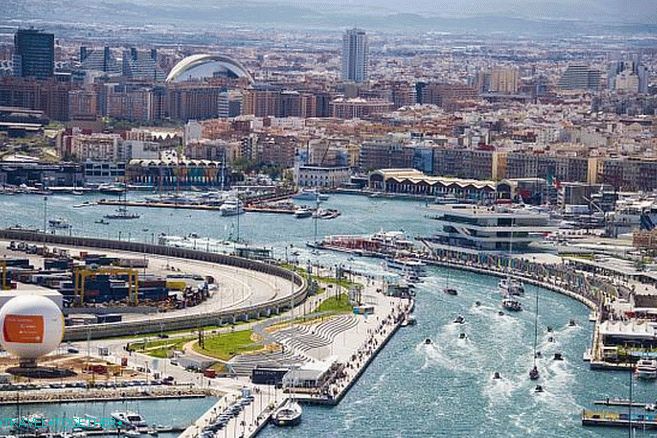 There are some tourists who come here to correct the situation. with your health, because Valencia is a great place for such kind of rest. Spa centers are everywhere: on the coast, in the mountain areas (for example, such as Sierra Calderon). Most famous Spa regions – around Cofrentes, Khulila in the province Valencia, Recuena. In the Valencia capital are the most luxurious spas or spa hotels.

The beach will be the best place to relax, as the hot sun and the cleanest sea will not leave anyone indifferent. By the way, the range beaches also provides a great selection. The best beaches are called beaches of the Costa Blanca (White Coast). 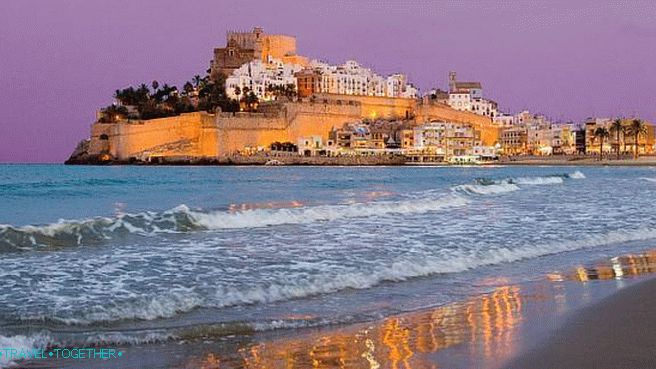 Les Rotes will be a good place for diving, and the beaches of Dénia will be great places for windsurfing. Perfectly clean the beaches you will see in Benicassim, the most colorful Peniscola. There are special beaches for nudists – Oropesy. there is the lively and noisy beaches of Pineda, Saler and Malvaros – on the coast Costa Valencia. There are calm and quiet that are great for family holidays, for example, the beaches of Oliva. Valencia resorts famous for their sporting traditions. On the beaches, tourists can play football and volleyball, rent water equipment for windsurfing.

Those who love shopping will also be satisfied. There are huge shopping centers that are not inferior to the famous Galeries Lafayette (Paris). Everyone can get everything that his soul anything you like: souvenirs, jewelry, unique handmade items and much more. Shopping centers recognized shopping centers located in Alicante and Benidorm.

There are those who come here to enjoy not only the sun, warm sea, art, but also excellent wines. After all, Valencia – the largest producer and exporter of wines. Cool walks Cellars and wine cellars will be a great variety in hot noon. 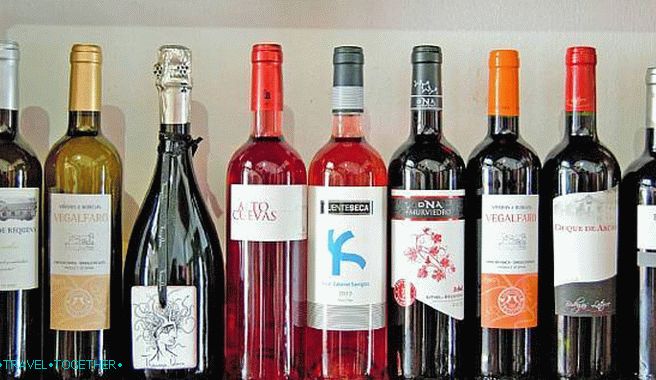 In addition, in Valencia and its surroundings are lush and famous holidays in honor of the national hero of Spain Sid. There is a medieval novel called “A Song of My Side”, who tells how the main character fought against Moors 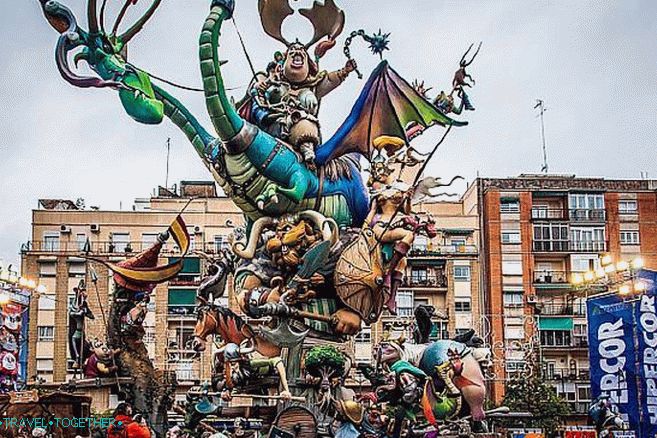 But the most famous and popular holiday in Valencia is Fallas San Jose (spring meeting). This is an impressive fiesta of light and fire. On five days in all the squares and main streets of Valencia Monuments are made of cardboard, around which are playful views, on the fifth day huge monuments are set on fire. Tourists visiting Valencia in this period will be day and night enjoy the endless stream of divine music and watch beautiful fireworks, hear the explosions of firecrackers. Spanish Fallas San Jose is partially similar to our Russian Pancake Week. 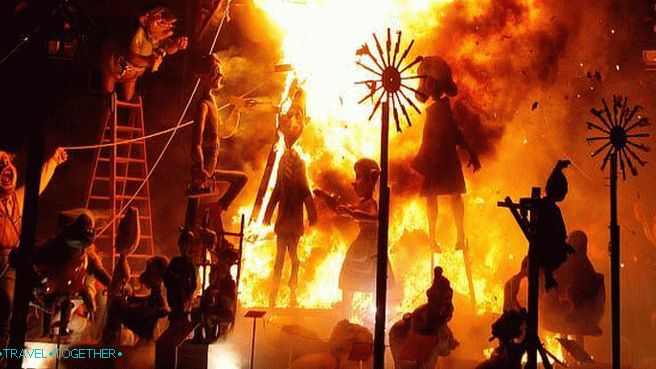 Valencia is considered the leader of tourism in Europe. This is the city that able to appease everyone, even the most demanding and harmful, tourist. So you can appreciate interesting attractions, incredible flavors and the brightest colors of this heavenly city.

Walking through beautiful parks giving a fantastic Romantic atmosphere of the city … What could be better? Here you can experience the feeling of neo-classicism of the eighteenth century with its flowing fountains, arches and avenues. There is even a song called “Valencia – the land of flowers”.

Among the sights of Valencia, the most interesting following: 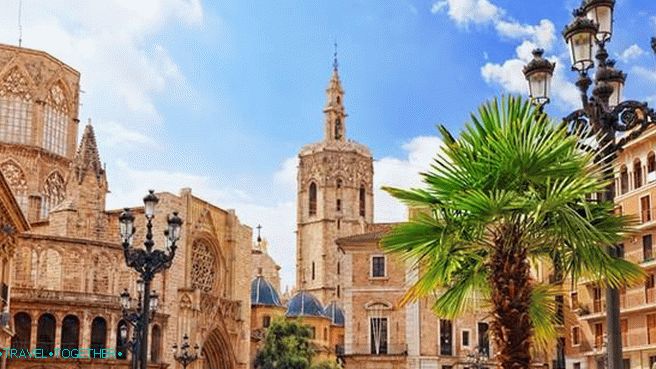 The cathedral is a beautiful 13th century cathedral. In its architecture and the interior is intricately intertwined Romanesque, French Gothic, Renaissance, Baroque and Neoclassicism. Cathedral Valencia is located in the heart of the Old Town – the area under name El Carmen. The cathedral connects the two central squares. The area is Plaza del la Reina and Plaza del Virgen. Interesting, that it was built on the foundation of an old roman church, which was turned into a mosque. Near the main entrance towers belfry – Migielete. The spiral staircase can be climbed to terrace, which offers a beautiful panorama of the historic center of Valencia. 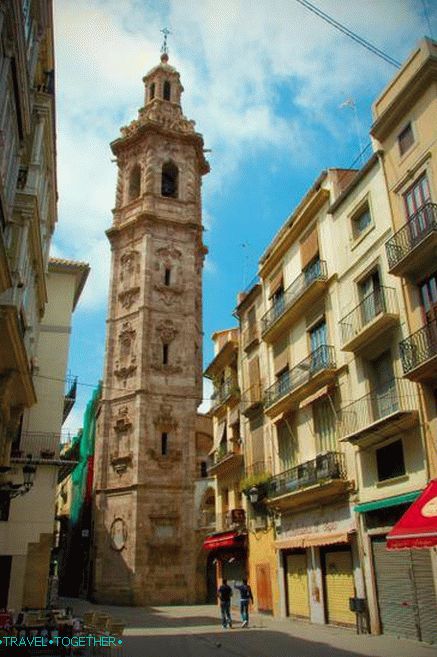 Temple of Santa Catalina – a temple of the 13th century, built on the site Muslim mosque. Especially in its architecture stands high bell tower, built between 1688 and 1705 years. it an authentic masterpiece of baroque Valencia, having an interesting hexagonal form. 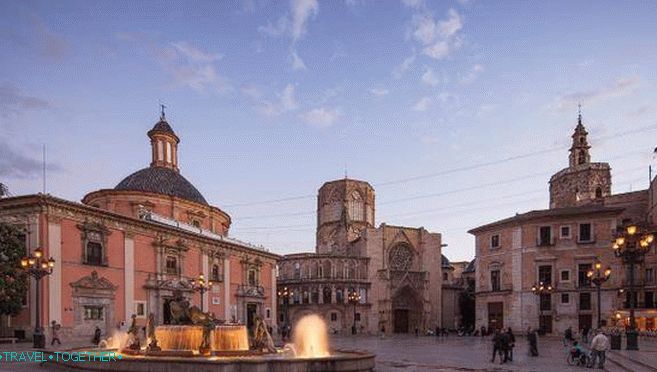 The Basilica of the Holy Virgin (de la Virgen) – one of the most important Churches of Valencia, located in the historic center of the city. Dedicated to the patroness of the city and the whole kingdom – Our Lady. The current image of the church originated in the 17th century. It is a mixture Baroque, Gothic and Renaissance. The interior of the 17th century is preserved, Palomino frescoes.

Parish of sv. Johanna (Real Parroquia de los Santos Juanes) – Church in the historic center near the Central Market. Has a similar origin with other churches of Valencia – was built on the foundations of an old mosque. First here was built a small chapel, then a gothic temple that was damaged fire and rebuilt in the Baroque style in the 17-18 century. Facade decorated small clock tower and sculptures. Inside the church you can look at the Palomino murals. 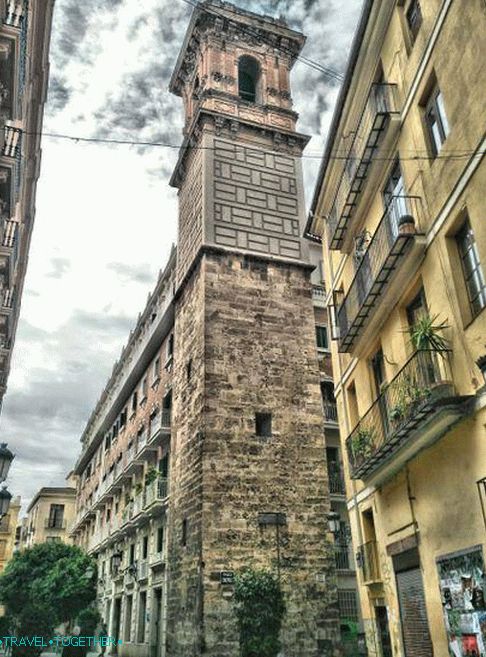 Church of San Juan del Hospital – interesting medieval church in the old town of valencia. It was founded in the 13th century, almost immediately after the conquest of the city of Jaime I. Combines romance, Gothic and Baroque elements. Small tower bell tower built in the 17th century. 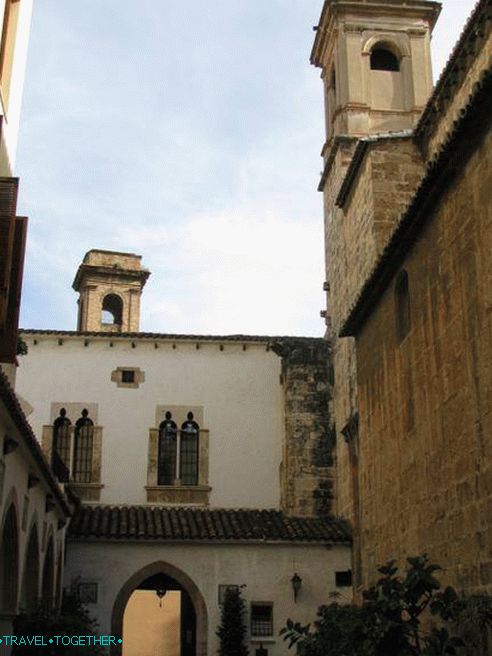 The monastery of San Miguel de los Reyes is a former monastery of the 16th century, which now houses the library. Built on site ancient abbey. This is a great complex in the Renaissance style. with beautiful towers, gates. 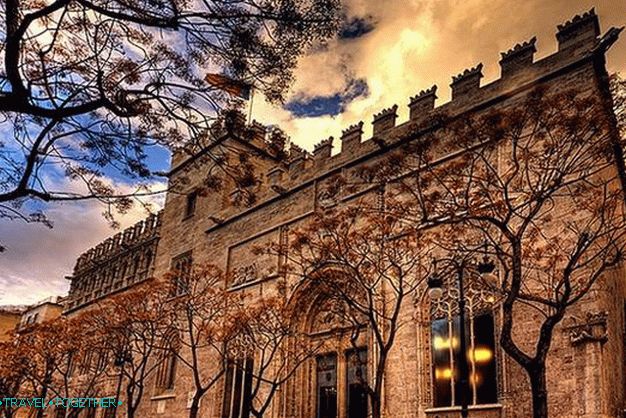 Lonja de la Seda (Silk Exchange) – a Gothic masterpiece located in the very center of Valencia. This building is listed in the World UNESCO heritage. It was built between the years 1482-1548 for silk and cloth merchants. Silk Exchange – the clearest example European civilian gothic architecture. 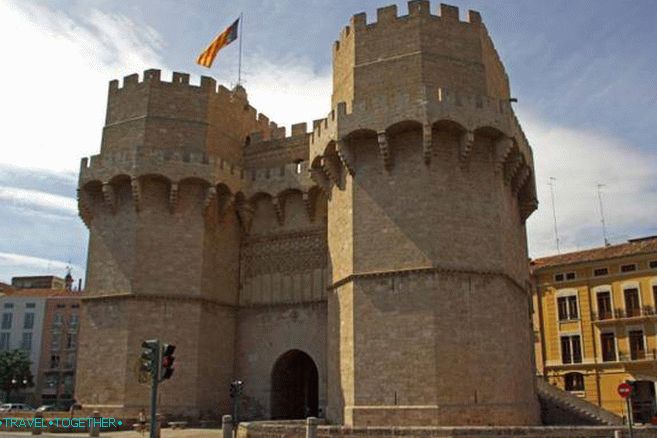 Torres de Serranos – one of the symbols of Valencia, powerful medieval gates of the late 14th century, which for a long time were the main entrance to the city from the north. Powerful walls and towers built of brick. The main entrance is a huge door with semicircular arches. On the sides are two powerful pentagonal towers. 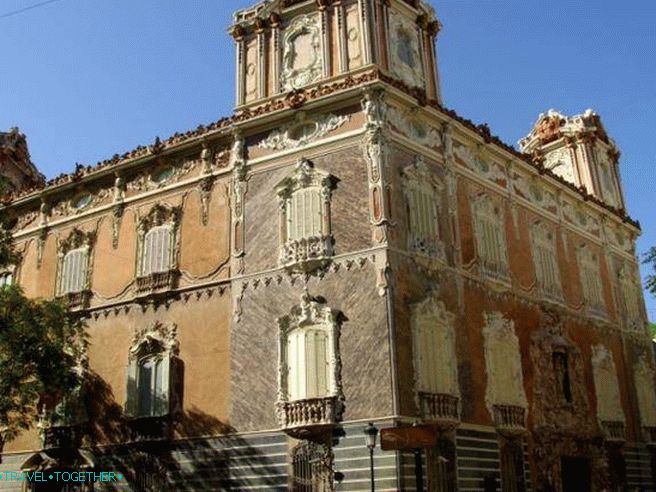 Palacio del Marques de Dos Aguas – a palace rebuilt in style Rococo from an old manor from the beginning of the 18th century. Now located here Museum of Ceramics and Arts.

North Station – the main railway station of the city, built at the beginning of the 20th century in modern style. 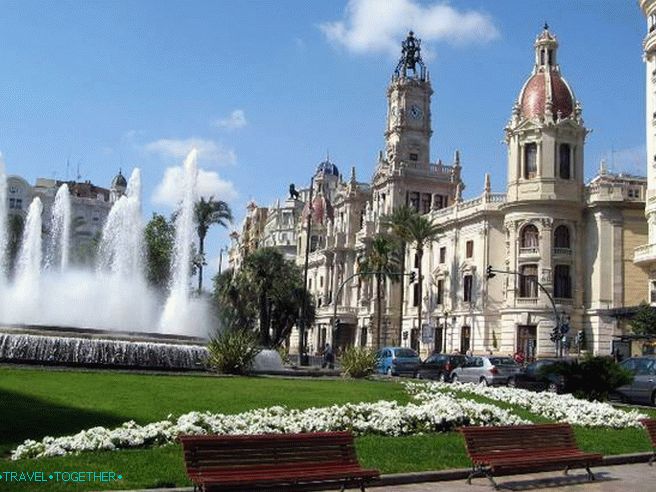 The Columbus Market is an old market built in the early 20th century in modern style. 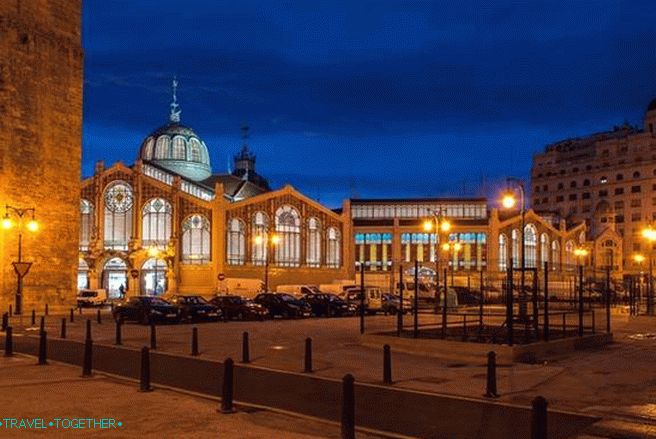 Towers de Quart – the medieval twin towers that were part of the fortress wall that protected the old city of Valencia. These powerful cylindrical structures were built in the middle of the 15th century. Between them were the gates to enter the city. They are almost not have a decor, because performed purely defensive functions. 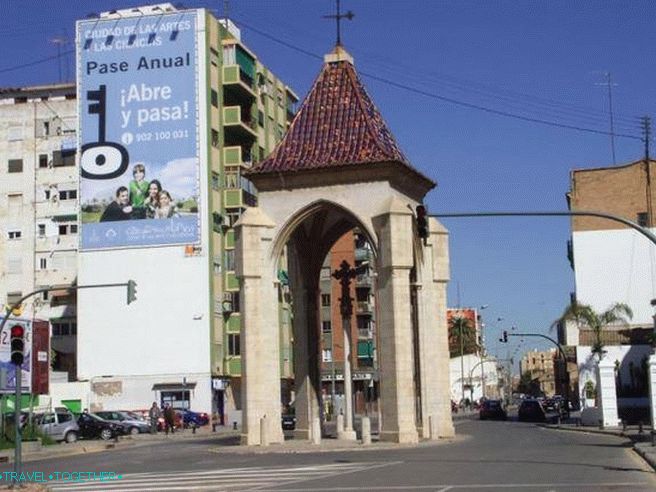 The ancient cross is a masterpiece of a 14th century Gothic by an unknown author. Located on the old royal path. 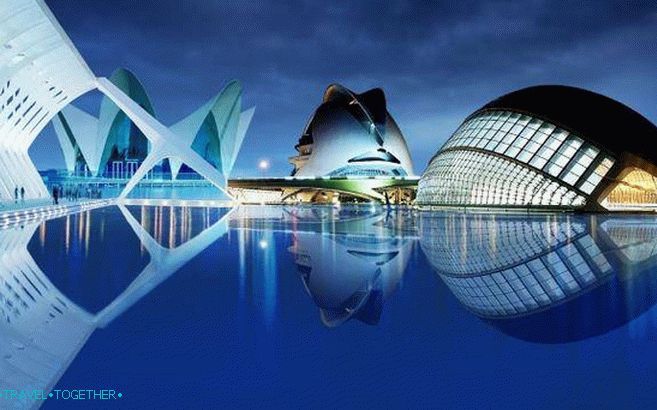 City of Arts and Sciences – one of the business cards of Valencia. it complex of cultural, architectural and entertainment facilities, opened in 1998. One of the most impressive structures of this kind type in Europe and the world. 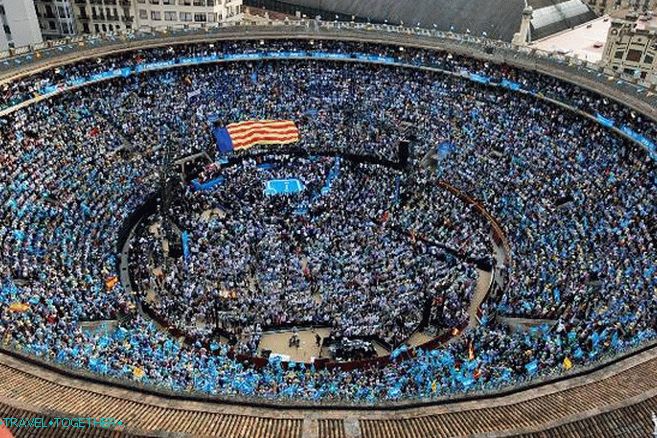 Plaza de Toros de Valencia is a bullring built in mid-19th century in a style reminiscent of ancient buildings such type, for example, the Colosseum. The arena is built of bricks. Building’s facade – arched (384 arches).

Valencia on a map of Spain