Umag (Croatia) – the most detailed information about the city with photos. The main attractions of Umag with a description, guides and cards.

Umag is a city in the north-west of Croatia in the region of Istria on Adriatic coast. Located at the westernmost point peninsula in a beautiful bay near the border with Slovenia. Umag is a picturesque small Mediterranean city with charming historic center, great beaches (some of which have the prestigious Blue Flag), beautiful nature, rich in history and tradition. It is an ideal place for family recreation: the warm sea and a lot of sun, hotels, apartments and camping sites

Umag – the most western city of Croatia, located 10 km from borders with Slovenia. The climate is Mediterranean with hot summers and mild winter. For a beach holiday it is better to choose a period from June to September. July and August are the highest season. At this time, many tourists, and hotel prices are slightly higher. In the vicinity of Umag there is a whole placer of excellent beaches, some of which have a blue flag.

The history of Umag is exceptionally interesting and rich. Despite that there is no written evidence of the existence of a city here the period of the Roman Empire, this place was loved by the Romans as a place recreation. The historic center of Umag has kept parts of the city walls and defense towers, as well as the houses and churches of the Renaissance and baroque.

The first mention of the settlement dates back to the 7th century. From 7 to 8 century Umag belonged to Byzantium, later it was owned by the Franks. At 13 century city recognized the power of Venice. The Venetians ruled Umag on over 5 centuries. At the end of the 18th century (after the fall of the Venetian Republic), the city became part of Austria. Habsburg owned by Umag before the First World War. Further until 1954, the city actually belonged to Italy until it became part of Yugoslavia. The nearest airports are located in Trieste (45 km) and Pula (65 km). Venice is only 50 nautical miles from Umag. therefore Venetian airport is a good alternative. Best way to get to Umag – Trieste Airport, which offers a large number of directions. Next you need to get from the airport to the main station and find a flight to Umag. There are 5 supermarkets in Umag, the largest of which is Plodine. On the main street and in the old town are many souvenir shops, shops with local products and products, boutiques. Streets of the Old Town

One of the main attractions of Umag is its the old town which is a medieval core with picturesque narrow streets, ancient walls and Venetian villas. Unfortunately, to our time there are no buildings and constructions of Antiquity and the early Middle Ages. In the western part The historic center is the oldest tower of urban fortifications.

The city walls began to be built in Umag from the 10th century. Most surviving plots and towers belong to the Venetian period. One of the main symbols of Umag is the church of Sts. Mary (sv. Rocha) with a beautiful bell tower with Venetian architecture style. Temple was built at the beginning of the 16th century and is an architectural dominant old town. 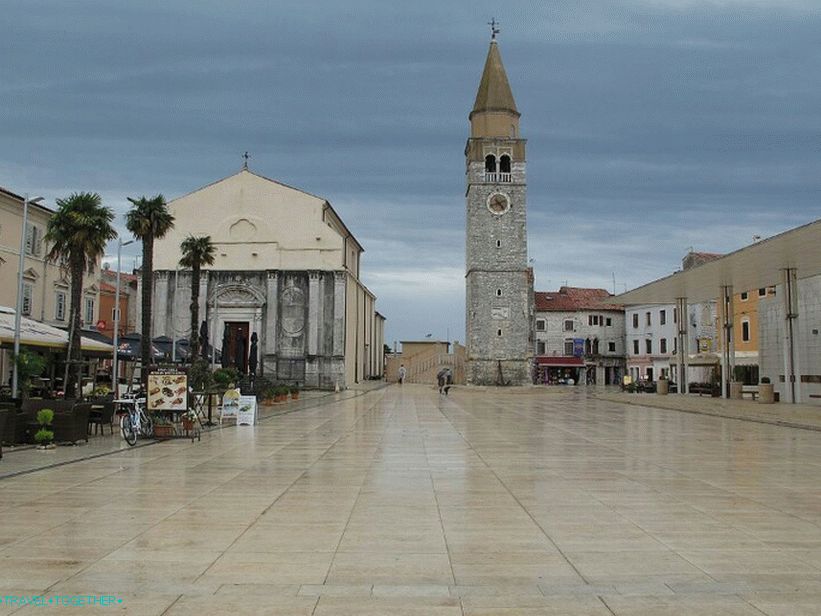 Not far from the city (on Cape Rosazzo) there is a small, very old church of sv. Peregrina (Pelegrio). It was built on the place where the same name was executed by order of Diocletian Saint.

Umag on a map of Croatia