Turin (Italy) – the most detailed information about the city with photos. The main sights of Turin with a description, guides and cards.

Turin – one of the largest cities in Italy, the capital of the region Piedmont. Located on the Po River at the foot of the Western Alps in an hour from the border with France and at about the same distance from Mediterranean coast. Turin is an elegant city with wide streets, squares, palaces and a unique metropolitan atmosphere. is he architecturally and culturally distinguished among all Italian cities and is of great historical importance. Turin is the first capital united Italy, the cradle of the Risorgimento – national liberation movement for unification and freedom.

The city has long been the main residence of the mighty Savoy. dynasty. In its heyday, the brilliance of architecture, he vied with Paris and Vienna: luxurious palaces, plenty beautiful buildings in baroque, rococo, neoclassicism and modern style. In addition, Turin is the capital of the 2006 Winter Olympics. year and one of the main industrial centers of Italy. 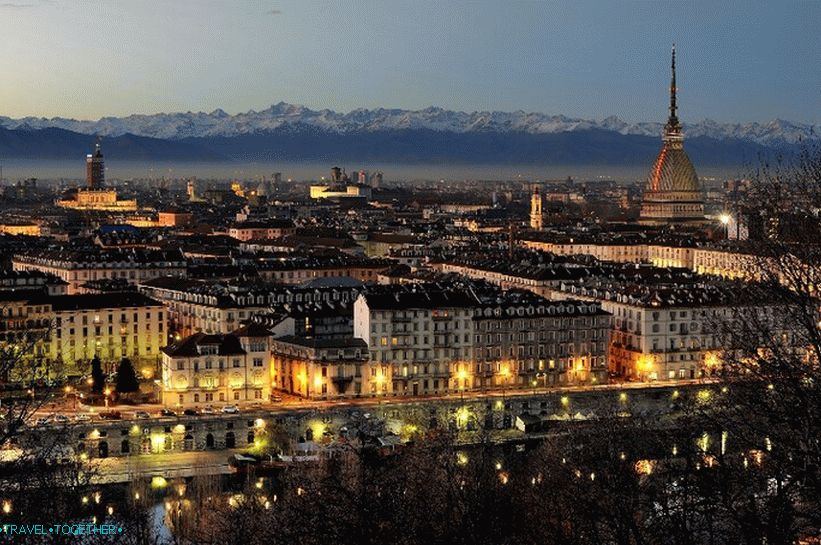 Turin is located in the northwestern part of the Padan Plain in the confluence of the Dora-Riparia and the Po near the foot of the Alps. River It divides the city into a flat and hilly part.

The climate is temperate with rather hot summers and mild winters. The average temperature in January (the coldest month) is about 1 degrees with a plus sign. Most precipitation falls from April to June. 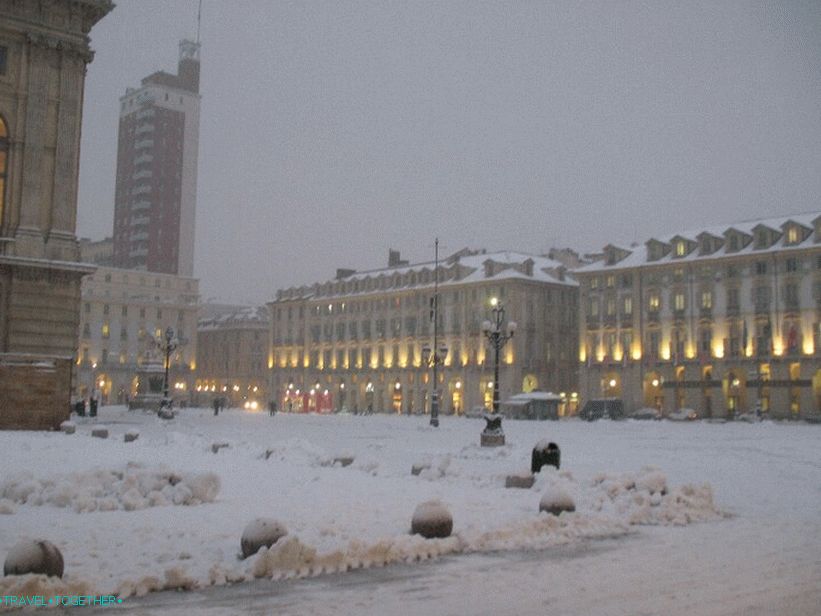 Originally on the site of modern Turin existed settlements of the Celts and Ligurians. In the 1st century BC, Julius Caesar founded a military camp here, which under Augusta was renamed in Augusta Taurinorum. After the fall of the Western Roman Empire of Turin came under the control of the Lombards, and later the Franks.

In the 13th century, the city became part of the possessions of the Savoy dynasty, and in 16 century acquired metropolitan status. This time is real flourishing. Turin. Here are built palaces and beautiful monumental buildings. In during the war of the Spanish inheritance, the dukes of Savoy won the French and took the title of kings. Turin got up one level other capitals of Europe. 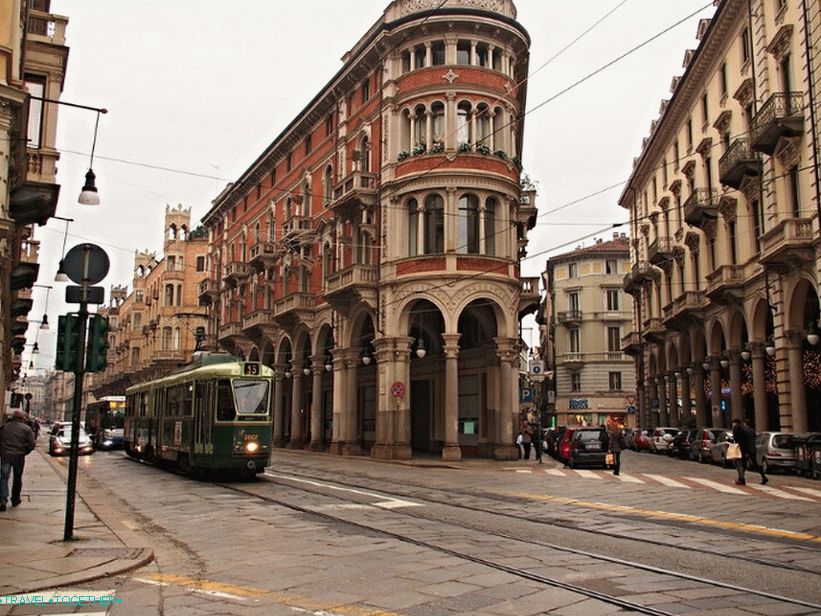 In the 19th century, Turin became the “cradle” of the national liberation movement whose goal was the liberation and unification of Italy. Also for some time the city was the capital of the country. At present Turin is one of the largest industrial, technological and cultural centers of Italy.

Turin International Airport is located 15 km north of historical center. The main carriers are Lufthansa, Air France, Turkish Airlines and Alitalia. From the airport to the center can be reached by train or bus. The SADEM bus runs every 15 minutes (30 min on Sundays) from the airport to the train station Porta Nuova. 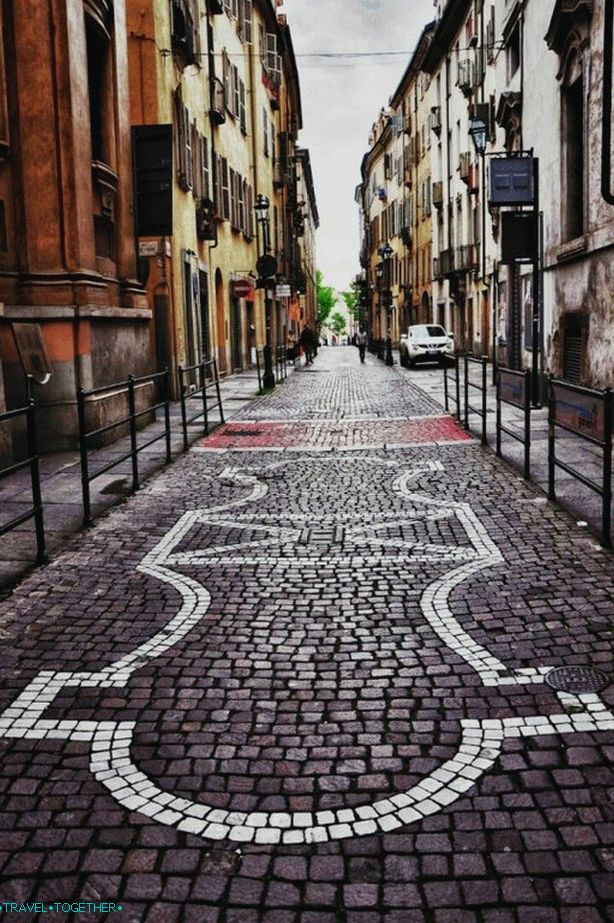 Turin from the point of view of shopping, this, of course, is not Milan. But also here You can find many shops, both inexpensive and branded.

The main shopping areas of Turin:

In the historic center of Turin, you can easily find places to every taste and wallet. High concentration of bars, clubs, cafes and restaurants in the area of ​​San Salvario.

From traditional (Piedmontese) cuisine the following are popular. dishes:

The main attractions of Turin. 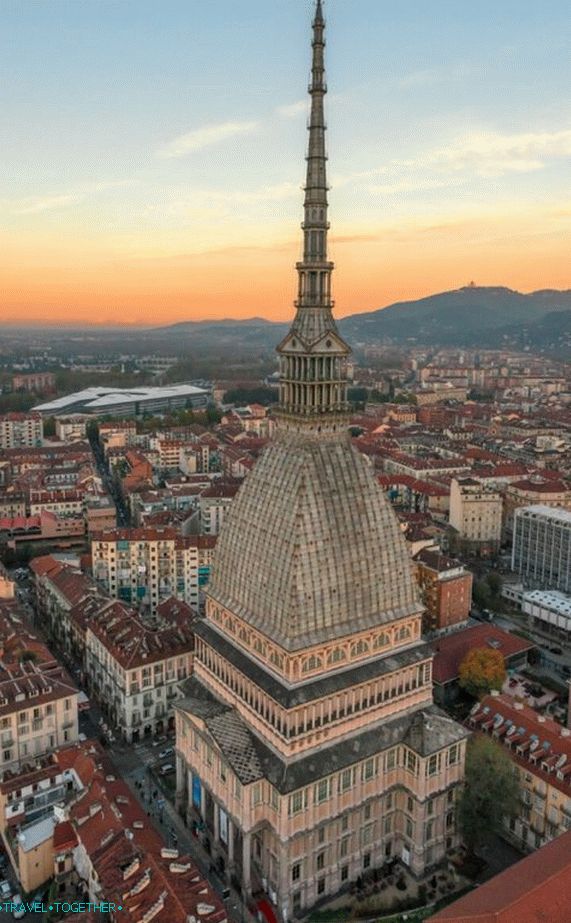 The Mole Antonelliana is one of the symbols of Turin, a 19th century tower with 168-meter spire. Construction began in 1863 Alessandro Antonelli. It was planned that there will be located synagogue. Now here is a cinema museum, and from the tower opens stunning view of the surroundings. 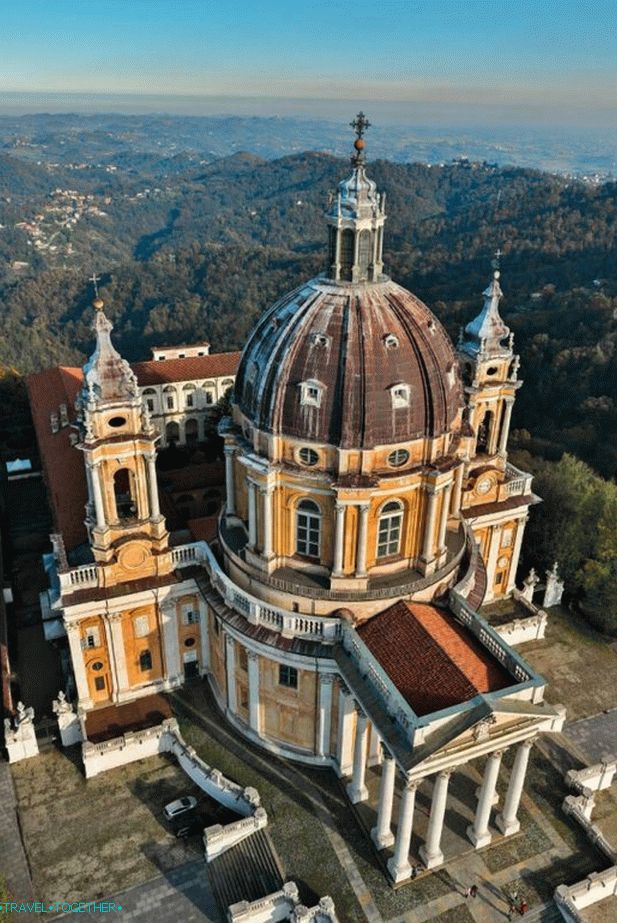 Superga Basilica – Cathedral on a high hill to the east historical part of Turin. It was built in 1731 in honor of victories over the French. Differs in beautiful style architecture. Baroque, rich in interior decoration and has many columns. The basilica is the burial site of members of the Savoy dynasty. From here you have stunning views of the surroundings with the Alps on in the background. You can get to the top both by car and by chain. train ride. In 1949, a plane crashed here with a football team. Turin. 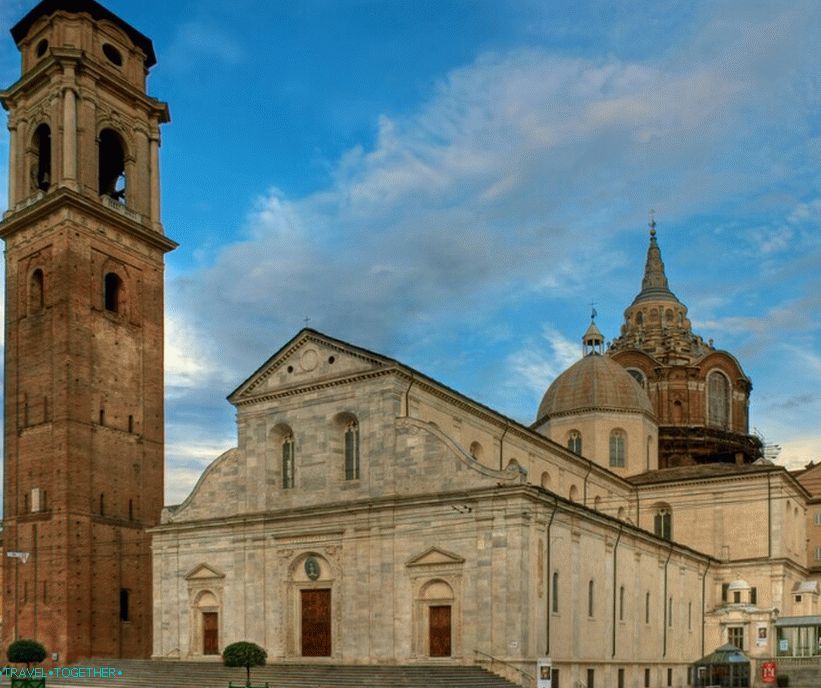 San Giovanni Battista – a great example of architecture Renaissance cathedral built at the end of the 15th century and dedicated to the patron saint of the city. The facade is made of white. marble, and the nearby bell tower is built of brick. On the tower you can climb. Inside you can admire the fantastic frescoes and marble statues of famous religious figures. Main landmark cathedral and one of the main Christian Shrines is Santa Sidon or the legendary Shroud of Turin – the shroud in which the body of Christ was wrapped. The shrine is located in closed chapel and not available to the public. 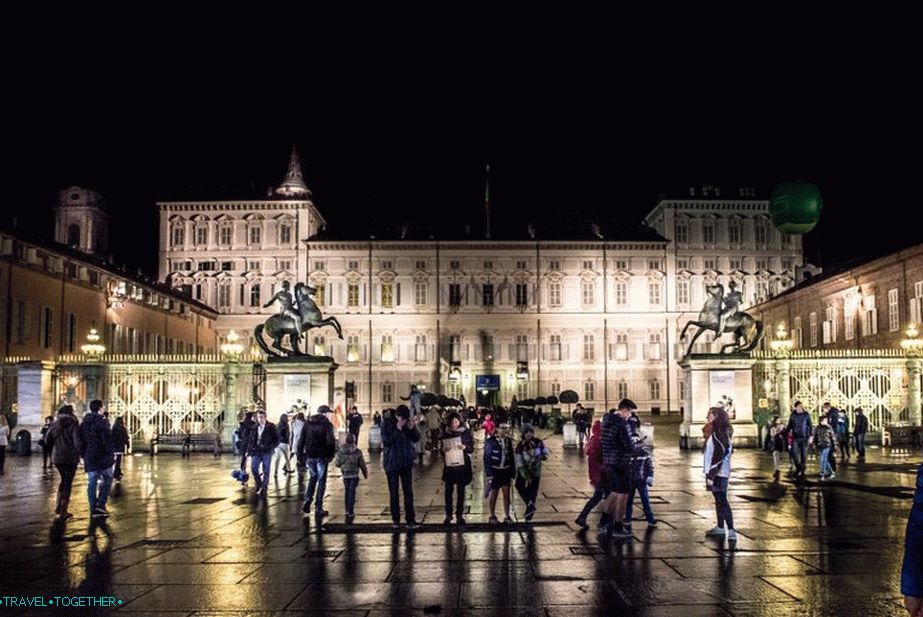 Piazza Castello is the main square of Turin, located in historical city center. Here are four main Turin Roads: Pedestrian Street Via Garibaldi, Via Po, Via Roma and Via Pietro Micca. The square has a square shape. Practically in The center is an architectural complex Palazzo Madama, in the north – The Palace of the Prefecture and the Royal Armory, in the east – Regio Theater, in the west – a couple of mansions and the church of San Lorenzo, Palazzo Reale and the Litoria Tower; in the east, the Subalpina Gallery. 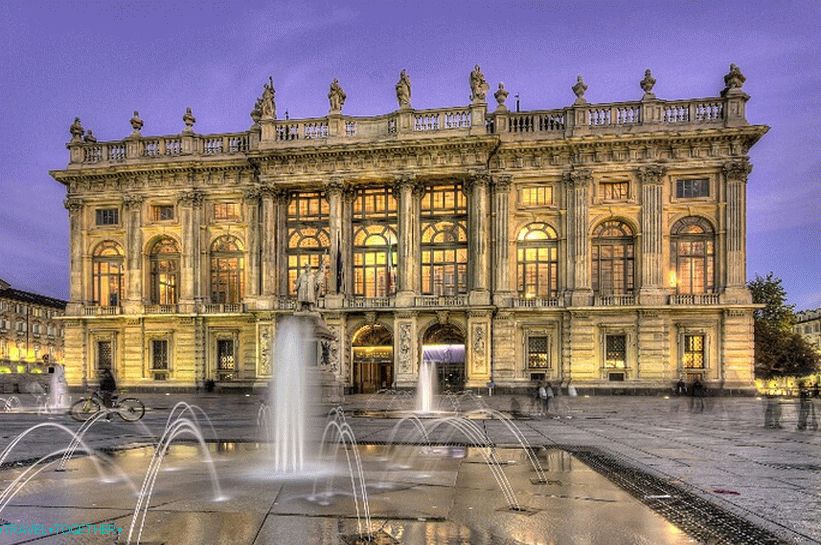 Palazzo Madama – is the central building of the Piazza Castello. At the heart of the modern building is a 13th century castle, built on the ruins of the eastern roman gate. In the 15th century the castle was expanded, and in the 18th century significantly rebuilt in the Baroque style. AT Currently, the palace houses a museum with expositions. stone works, sculptures, jewelry, paintings and furniture.

Palazzo Reale – the royal palace, a magnificent building of the 16th century. The building has a simple design and square layout. The facade is trimmed white stonework and decorated with many small ornamental windows that add to the palace of majesty and formality. Inside there are many richly decorated rooms. 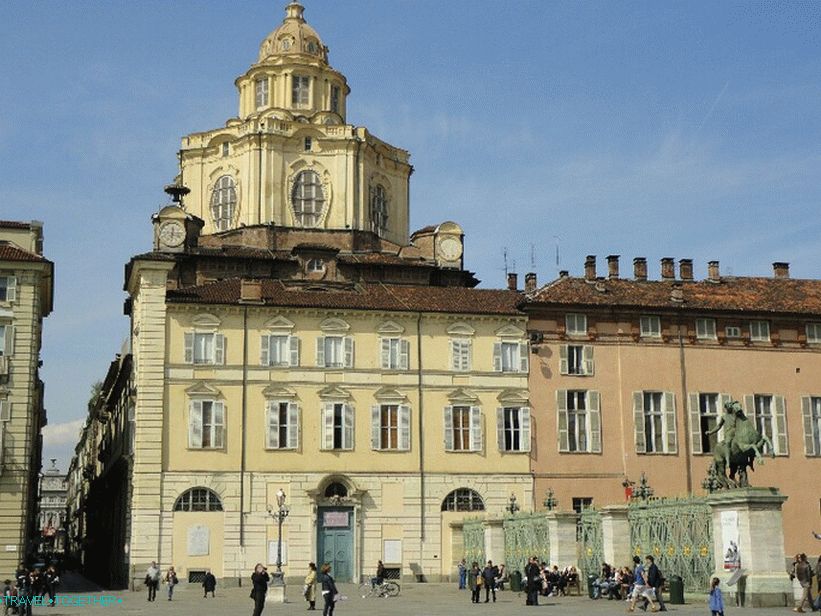 Church of San Lorenzo – a small religious building of the 17th century next to the Palazzo Reale. This is a real baroque masterpiece from Guarini. Architecturally San Lorenzo is considered one of the greatest churches in the world. for its unusual and bold design of the dome. 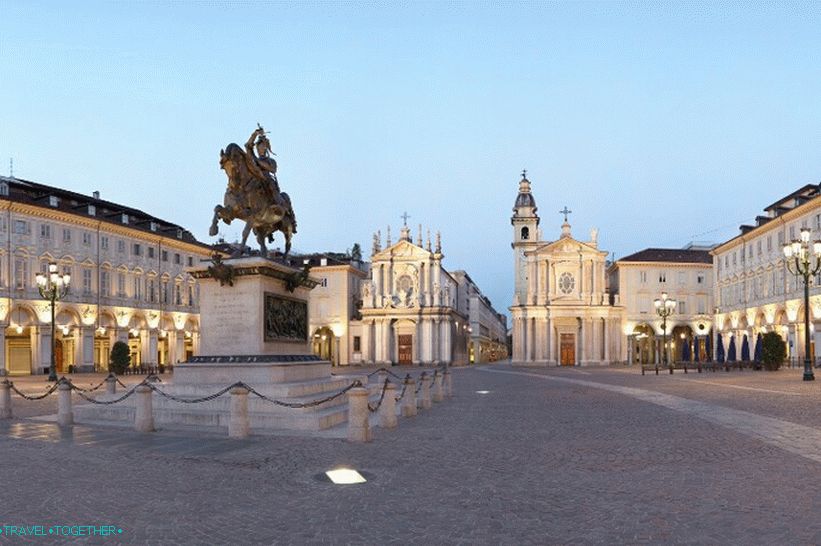 Piazza San Carlo is a beautiful baroque square, formed in the 16-17 centuries. Named after the influential Archbishop Karl Borromeo. In the center of the square stands a bronze the statue of the Duke of Savoy, and on the edges – the church of Santa Cristina and San Carlo Borromeo. Piazza square is framed by arcade and marble buildings that give it a beautiful symmetry. 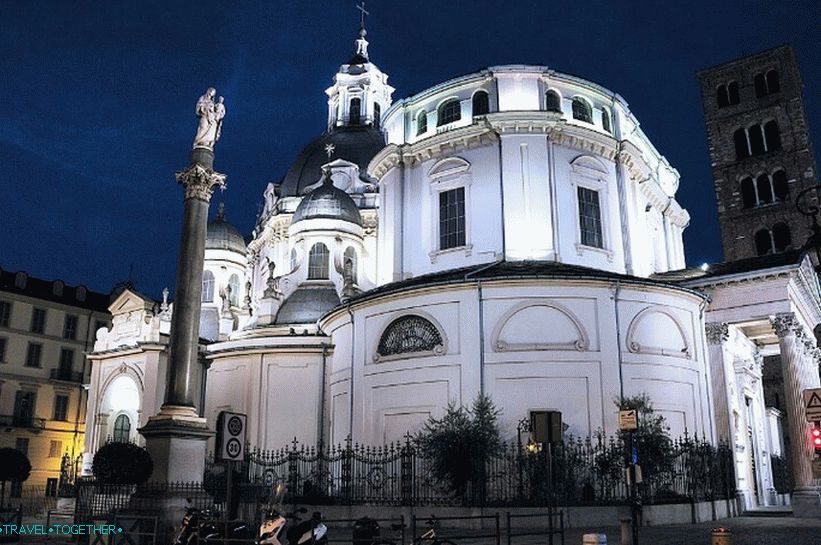 The Church of the Virgin Mary is a beautiful baroque basilica, founded in 11 century. Located in the small square of Piazza della Consolata, about 5 minutes walk west of Republic Square. A triangular gable adorns the entrance and is held by four large stone columns. Inside the basilica are many marble, gold and religious iconography. The main altar has several religious murals and detailed paintings, while the small altar is decorated golden relief of the Virgin Mary 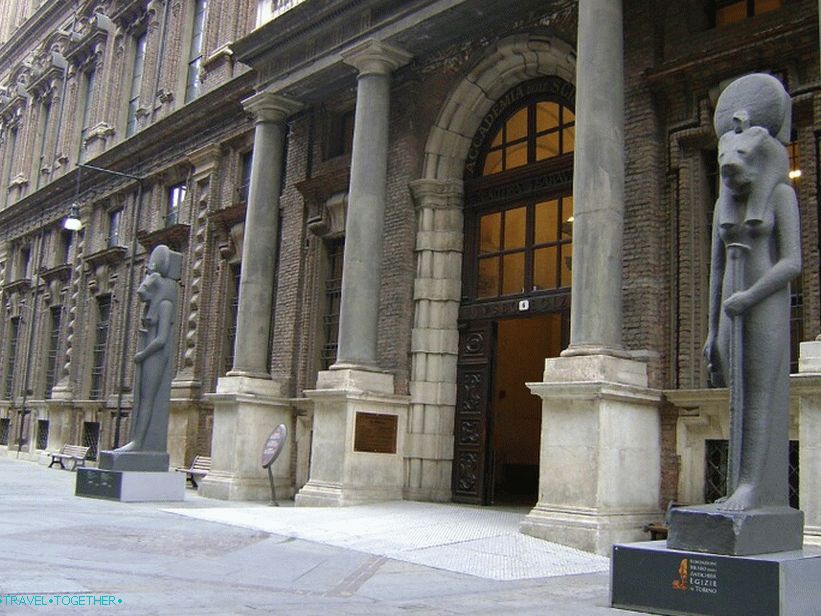 The Egyptian Museum is one of the most interesting museums in Turin. Located between the squares of Castello and San Carlo. This museum, dedicated to ancient Egyptian archeology and history, contains a huge amount of valuable exposure. 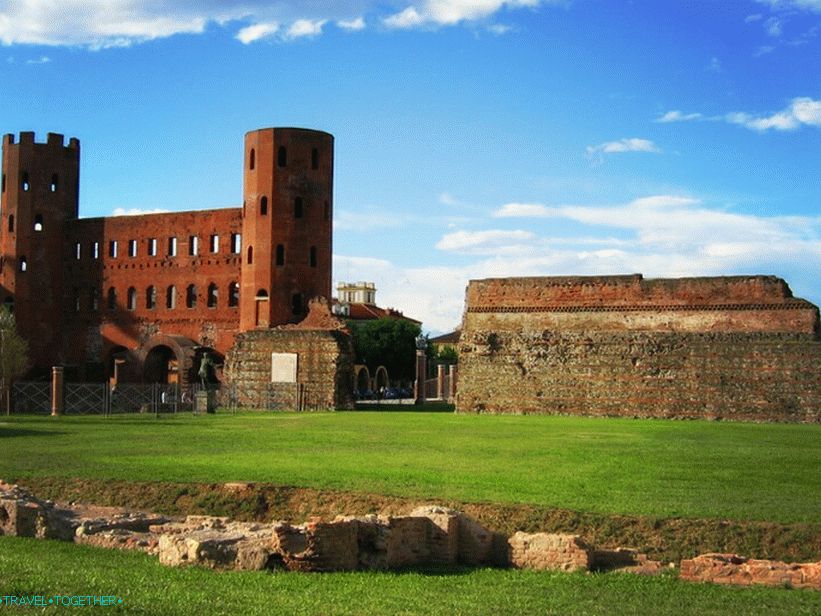 Porta Palatina – the 1st century Roman gate, the only ones preserved from four ancient entrances to the city. Three-story wall built of brick and connects a pair of polygonal brick towers Nearby are the ruins of the Roman theater. 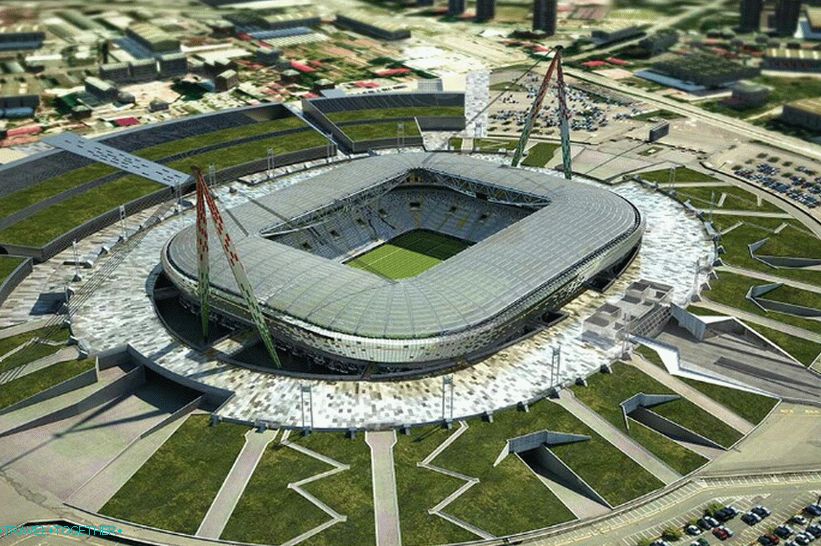 Allianz Stadium – the home arena of the famous football club Juventus, one of the most famous stadiums in the world with a capacity of more 40,000 people.

Parco Valentino is one of the largest park complexes in Turin. Its main highlight is a copy of a medieval village, built in the late 19th century.

Tourist card Another map of Turin

Turin on the map of Italy