Tubingen, Germany: the most detailed information about the city Tübingen, the main attractions with photos and descriptions, location on the map.

Tübingen is a beautiful old town in southwestern Germany. the region of Baden-Wuerttemberg. He is undoubtedly one of the most interesting and authentic cities of Germany with picturesque and excellent preserved medieval altstadt. Tübingen was founded in the 11th century. and practically did not suffer during the Second World War. Old The city located along the Neckar River looks almost the same as five centuries ago: winding narrow streets paved with cobblestones and old medieval houses.

The population of the city is almost 85,000 people. About – about 25,000 students who fill out pubs and low-cost urban ones cafes, and turn Tübingen into a youth and student city. Interestingly, the standard of living here is one of the highest in Germany. 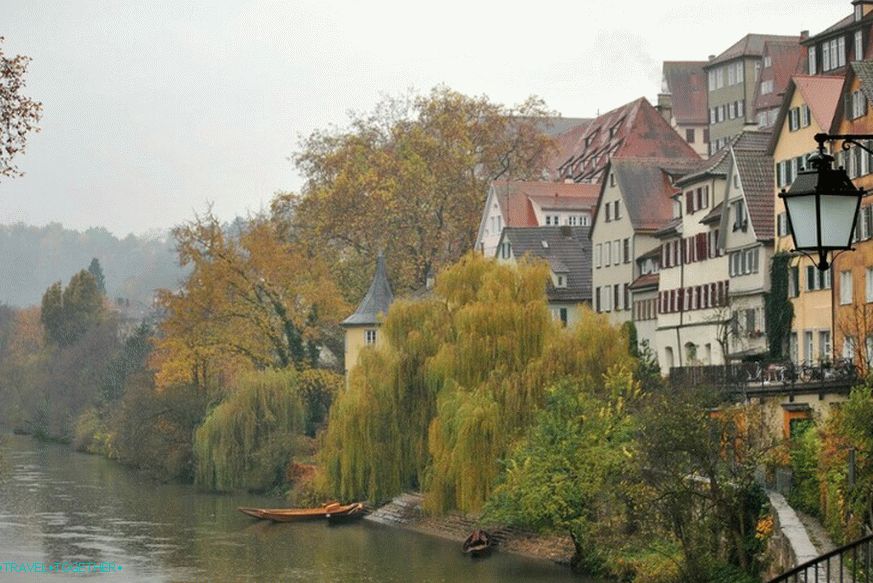 Tubingen is located almost in the center of Baden-Wuertenberg in the Neckar river valley 30 km from Stuttgart in the hilly terrain, covered with forests. The climate is temperate with warm summers and mild winters. It is one of the most comfortable in Germany.

Although this area was inhabited in deep antiquity and even ancient the Romans left their traces here, the first mention of Tübingen date back to the 11th century, when the old castle was built. Himself The city has been mentioned since 1191. City rights were obtained in 13 century. 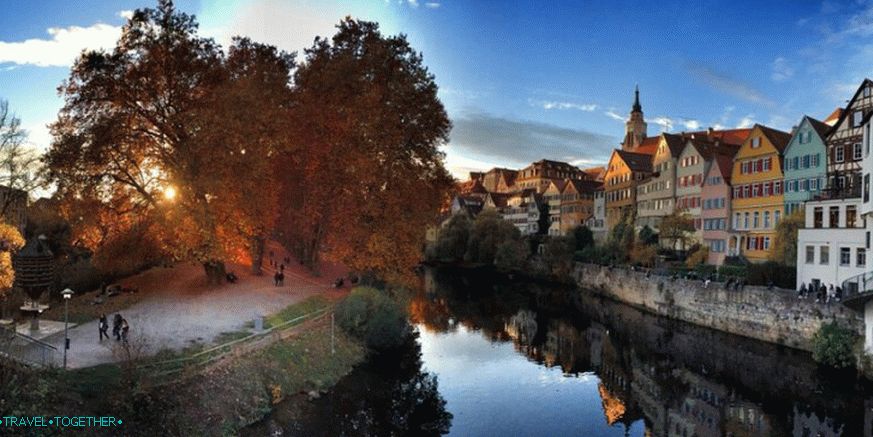 In the 13th century, a Franciscan monastery was founded here, which lasted until the Reformation in the 16th century. In the 14th century the city was Included in the Duchy of Wuertenberg. It was founded in 1477 university which is one of the oldest educational institutions Europe. 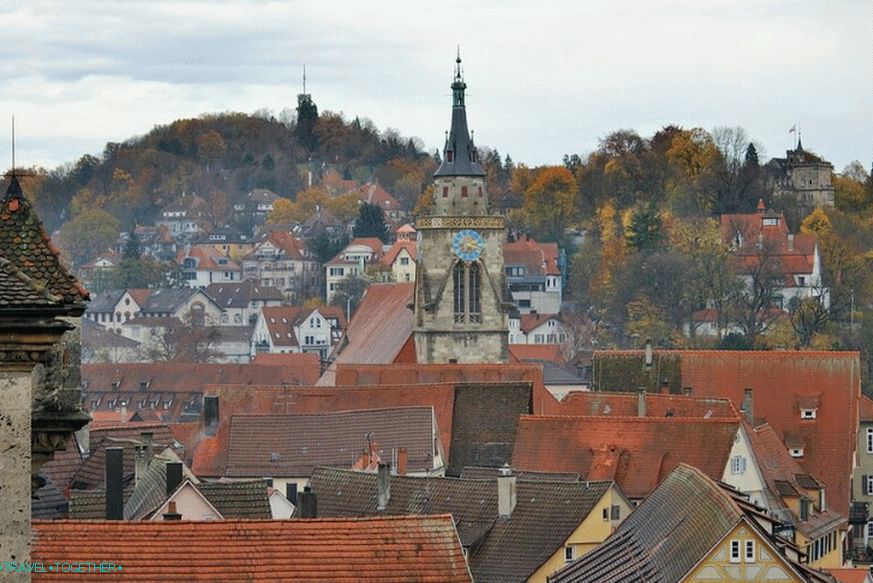 Tübingen in the autumn

During the Thirty Years War, Tubingen was occupied catholic league, suffered plague, was later taken by the Swedish and by french troops. In the 18th century, a large fire destroyed part the old town which was later restored in style historical authenticity. During World War II the city practically hurt. Only one bomb fell on the city, damaged several historic buildings.

The nearest airport is in Stuttgart. To Tubingen from there can be reached by bus 828, which runs every hour. Airport Frankfurt am Main is 2.5 hours away. Also go straight here trains from Stuttgart, Mannheim. The train station is located in 10 minutes walk from the city center. 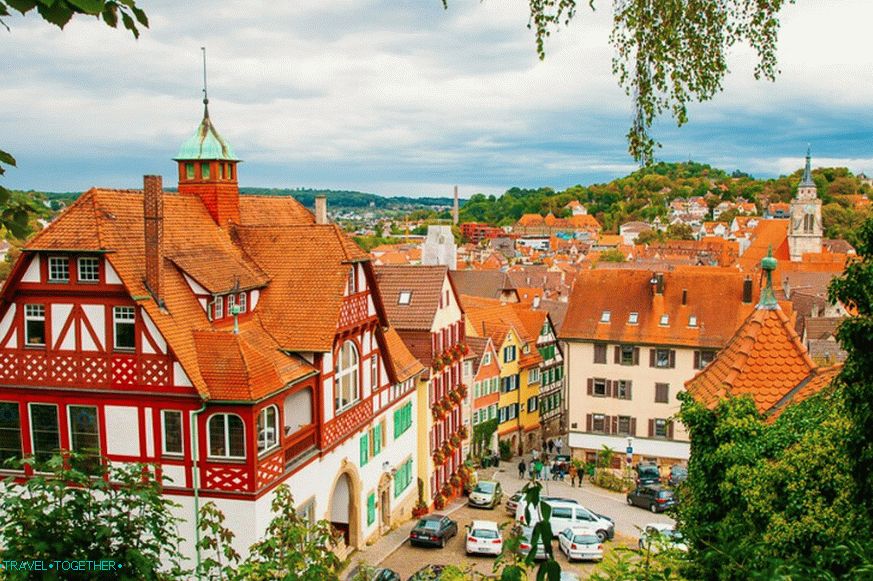 The old town of Tübingen besides interesting sights and monuments of architecture can offer many shops and souvenir shops. To buy wine and other liquor recommend shop on Lange Gasse. Souvenirs and other trinkets can be bought at Marktplatz and in the university shop at Wilhelmstr. Chocolate and other sweets can be found in the shop on Collegiumsgasse.

The place of Neckarmüller is very popular and distinctive. which offers local beer, traditional German cuisine and wonderful view from the terrace to the river. Tasty and inexpensive fast foods can be found on Gartenstrasse in Kalender and Aksaray 3. In Manufaktur on Haagtorplatz can eat inexpensive and tasty pizza And on Lange Gasse go into cheap Indian restaurant. 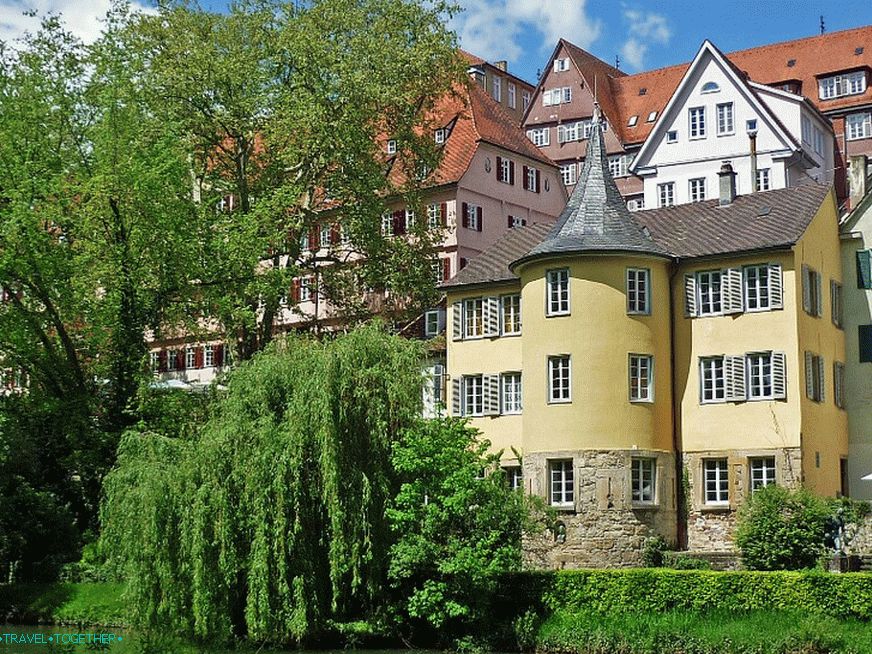 Hölderlinturm – one of the symbols of the city, a yellow building with a tower with a pointed lid, located in a beautiful place by the river Neckar. The tower was built in the 18th century on a medieval foundation. construction of urban fortifications. Closed for restoration until 2019 of the year. 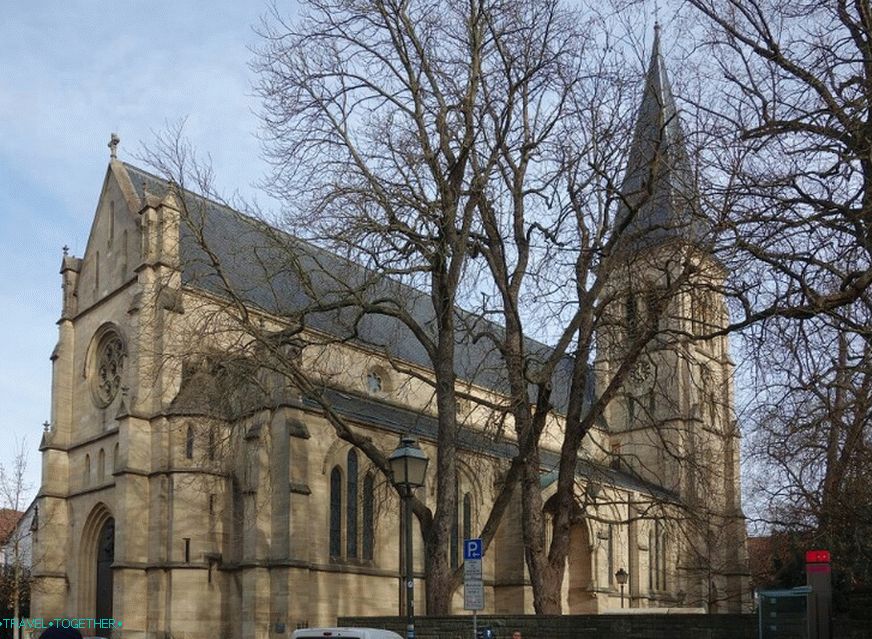 Cathedral of sv. John built in the 19th century and is one of the most beautiful and important neo-gothic buildings in Baden-Würtenburg. The cathedral was built to replace a small catholic parish churches.

On Ammergasse is located the famous curve bridge, known from 14 century.

Marktplatz – the heart of the historic center. This is the oldest square Tübingen with a charming atmosphere and architecture of the 15th and 16th centuries. On Mondays, Wednesdays and Fridays, the market operates here. On The square has a fountain of the beginning of the 17th century with a sculpture of Neptune, made in the style of the Renaissance. 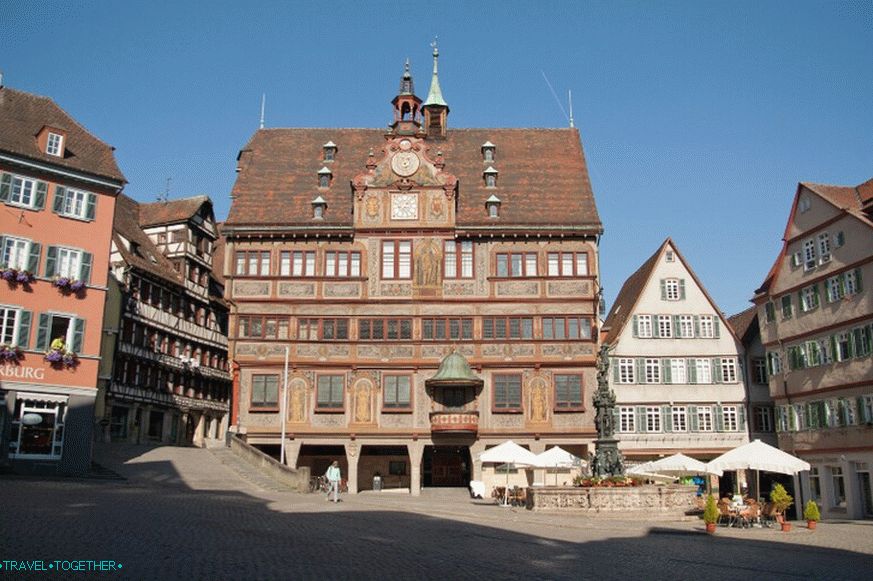 The Town Hall is the oldest building of the market square, whose history started in 1435. The building was substantially rebuilt at the beginning. 16th century. At the end of the 19th century were installed on the turret were set astronomical clock. It is interesting that the first hours on The town hall was installed in the 16th century and is now stored in a museum. 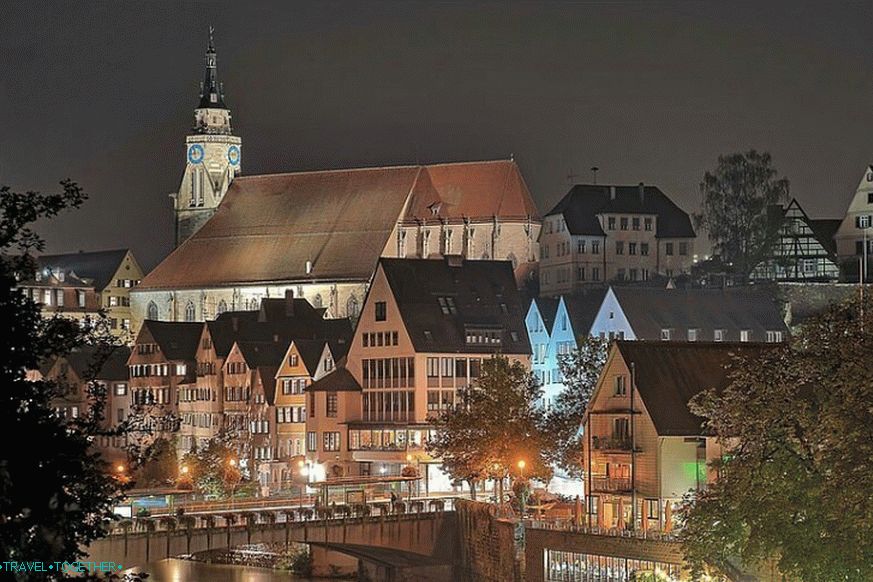 In the very heart of the old city one of the oldest and The most beautiful church in Tübingen is Monastic. This Late Gothic construction was built at the end of the 15th century. Height towers – 56 meters. Here the dukes of Württemberg and their relatives. The church has 14 stone tombs. On the tower you can climb. 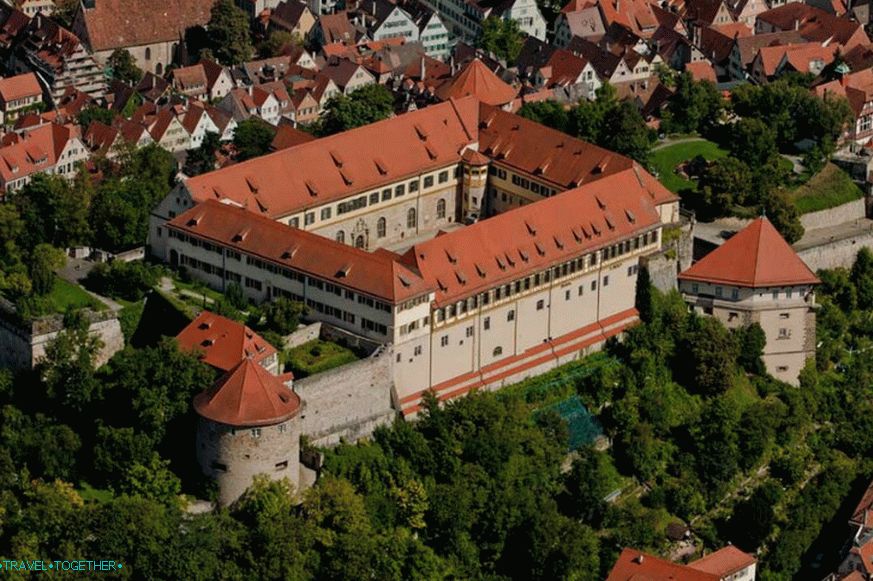 From a height of 372 meters over the centuries, looking at the city Castle Goguntübingen. This is the oldest place in Tübingen. Castle was founded in the 11th century. Later it was rebuilt into a powerful building in the style of Renaissance with round towers. In the 16th century, the castle ceased to be residence of the Dukes of Würtenberg. At the beginning of the 19th century the building was donated to the university. The castle hill offers a great view of Tubingen and the Neckar valley.

A rather distinctive place is Holzmart or Forest Market. This small elongated rectangular area is located a little north of the Collegiate Church.

Between the old city and the university is located Botanical garden.

Tubingen on a map of Germany