Trondheim, Norway: the most detailed information about the city Trondheim, the main attractions with photos and descriptions, location on the map.

Trondheim is a city in Central Norway located on the river Nidelva on the shores of the Gulf of Trondheim. It is the third largest in the country and one of the oldest in Norway. Trondheim – one from the main cultural centers of the country, the city of students, science, technology and festivals. It boasts a rich historical a heritage that favorably sets it apart from, for example, the capital Oslo.

Trondheim is located in the central part of Norway at the mouth of the river Nidelva in the place of its confluence with the Trondheim fjord. Climate – nautical. Summer is cool and winter is mild with small frosts. For the year falls almost 900 mm of rain. 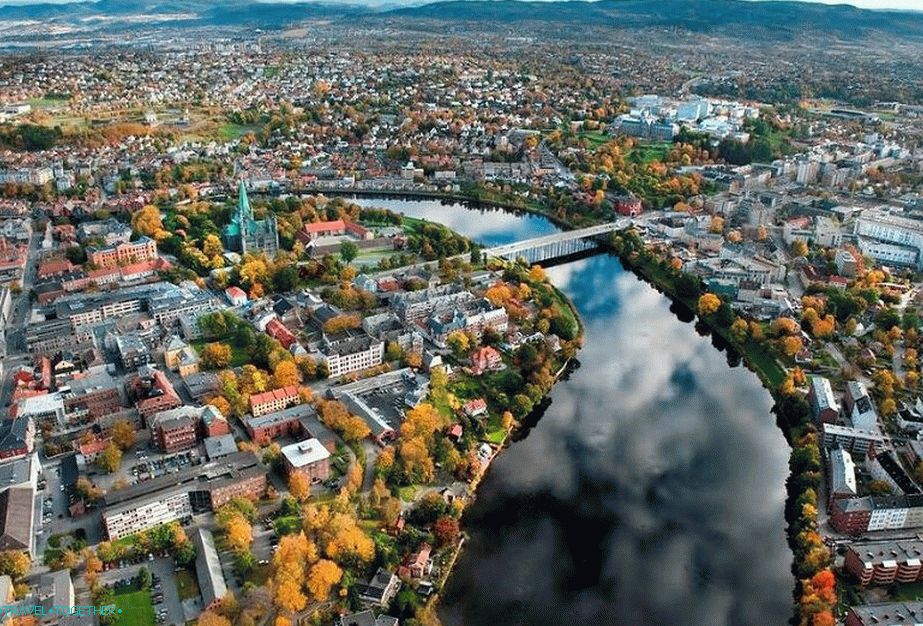 The best time to visit is May-September and winter.

Trondheim was founded at the end of the 10th century by King Olaf the Holy. it one of the oldest cities in Norway. At that time the city was called Nidaros, which means “city at the mouth of Nida”. King Olaf fell in battle near Nidaros and was buried here. Almost to the middle of 13 century Nidaros was the capital of Norway, in 1230 yielding this title Bergen. At the same time, the tradition of the coronation of the Norwegian Kings in Trondheim.

Despite the fact that the city has lost its capital title, it is always remained one of the main cities of Norway. For a long time the historic center of the city remained wooden. For its history Trondheim burned more than 10 times. After a devastating fire in the 17th century the historic center was rebuilt in baroque style with wide avenues and distances between buildings. Although in the old town to you can still find old wooden quarters.

Nidaros was renamed Trondheim at a later date. Middle Ages. From Norwegian new name translates as “house strong. “Interestingly, in the 30s of the 20th century was undertaken an attempt to return the historical name Nidaros, but was so negatively received by residents that a year later the city became Trondheim again.

The local airport serves international and national flights. from: Oslo, Bergen, Spain, Amsterdam, Copenhagen, Riga, Warsaw, Prague and other cities. In the city center from the airport can be reached by train and bus. The cheapest option is the train (70 Norwegian CZK), which is sent every hour.

Trains from Oslo run 4 times a day. If you travel by car, you need to take the E6 motorway. Go to Trondheim and buses, but trains are cheaper and faster. 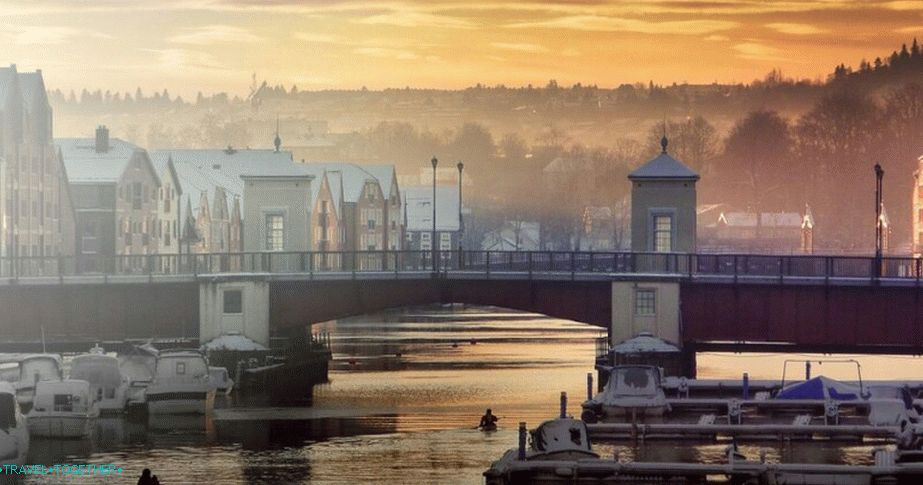 Trondheim is one of the centers of Norwegian shopping. Despite, that Norway is a very expensive country, here you can make great purchases. Main shopping areas: Trondheim – one of the main gastronomic centers Norway Here you can find food for every taste and wallet. The culture of street food is widespread. Mostly priority given to local products that are of very high quality. Also great beer is brewed here.

Since the city is a student, there is quite rich nightlife, many pubs and bars, but you need to know that most of them closes quite early. 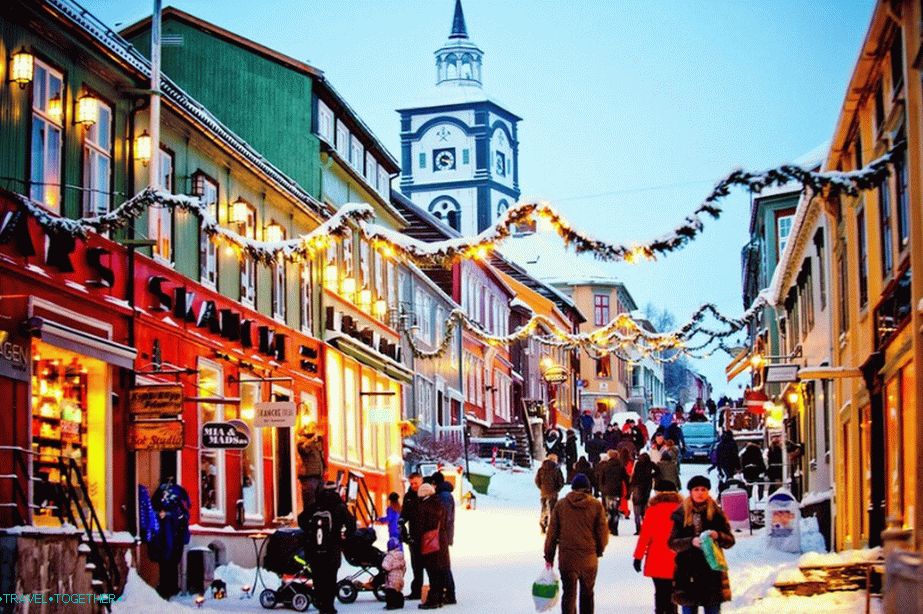 Trondheim stands out from other cities in Norway with its rich in history, landmarks and monuments culture. 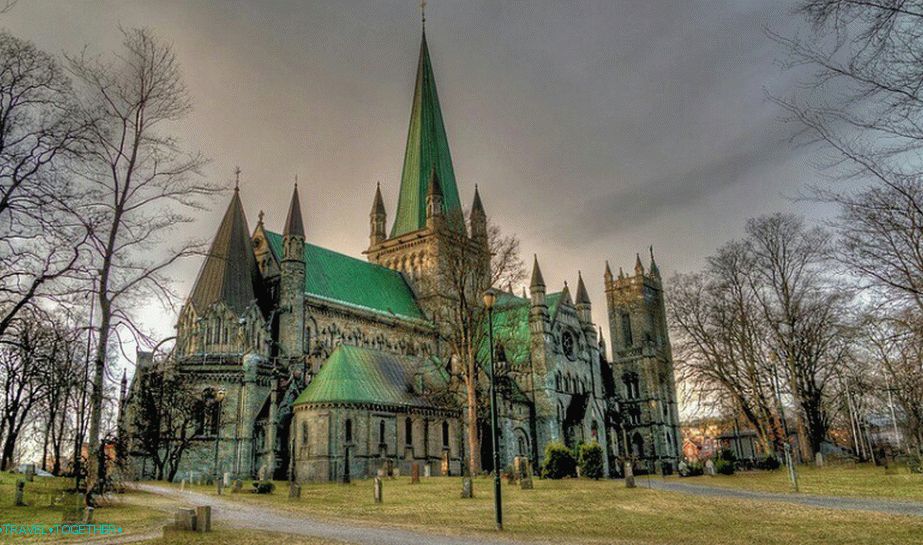 Nidaros Cathedral is a masterpiece of the Norse Gothic, one of the greatest religious buildings of the country. Legend has it that the cathedral stands on the burial place of King Olaf, called the Saints, the founder Trondheim, who died in its vicinity. High altar inside The cathedral is located exactly in the place of his burial. Thanks to this in Nidaros Cathedral flocked pilgrims from all over Norway. The first Romanesque temple was built in 1070. In the 13th century the building was rebuilt in the Gothic style. Oldest preserved items Cathedral belong to the 12th century. After the fires during the Reformation at 16 century building was in poor condition. Nidaros Cathedral was subjected to significant restoration in the 19th and 20th centuries, so that now sparkle in all its glory. 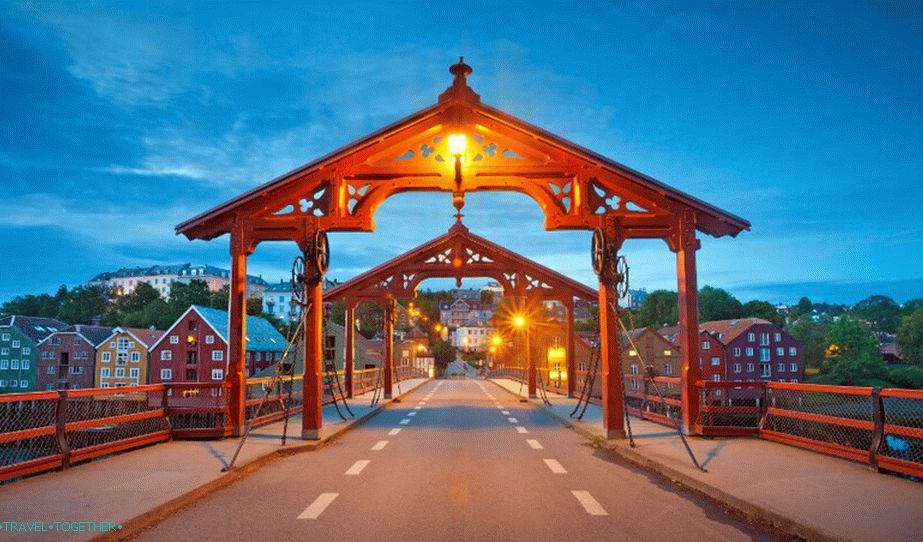 The old bridge over Nidelvu was built at the end of the 17th century. Interesting for its gate, which received the nickname “gate happiness. ” 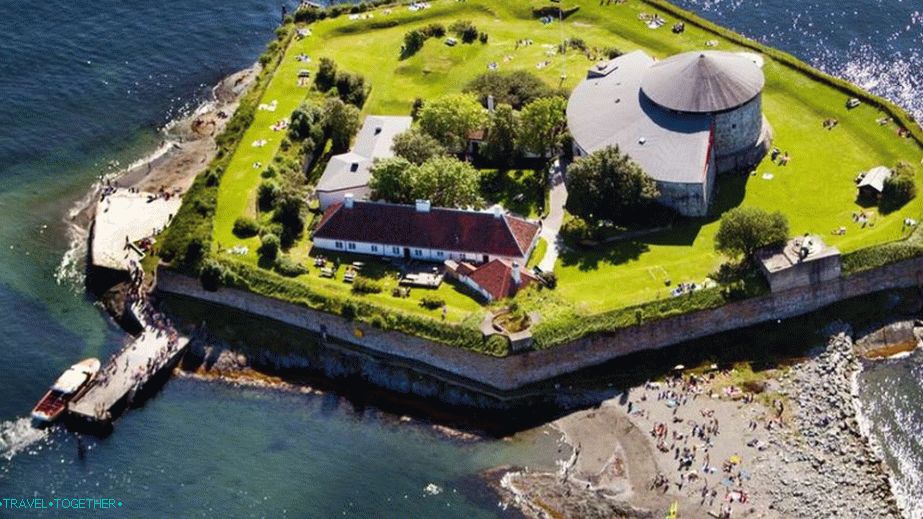 Munkholmen – the oldest monastery in Norway, located on island near Trondheim. It was founded by Olaf the Saints. In times Vikings were executed here. Benedictine monastery on this The place was built in the 11th century. The monks lived here until the Reformation at 16 century. In the 17th century, Denmark turned the monastery into a fort. Some time here was a prison. In the form of a fortress, he reached our days 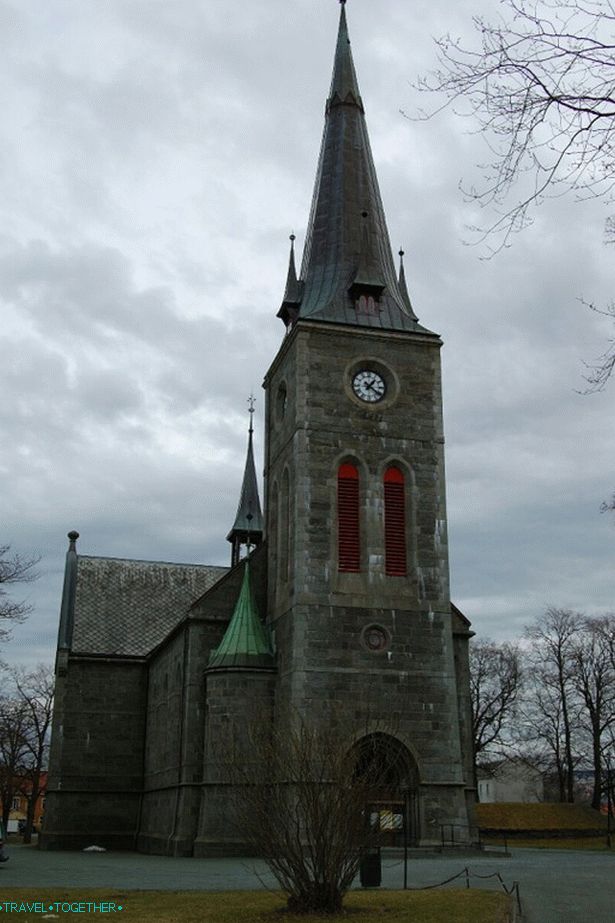 Ile church – parish neo-gothic Lutheran church, built in the late 19th century. It is located between the river Nidelva and Trondheim Bay. 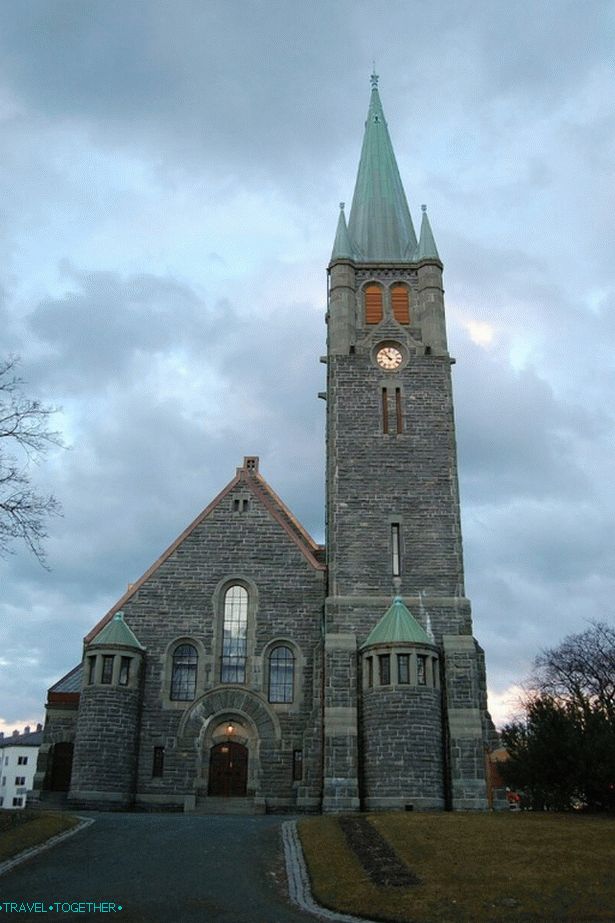 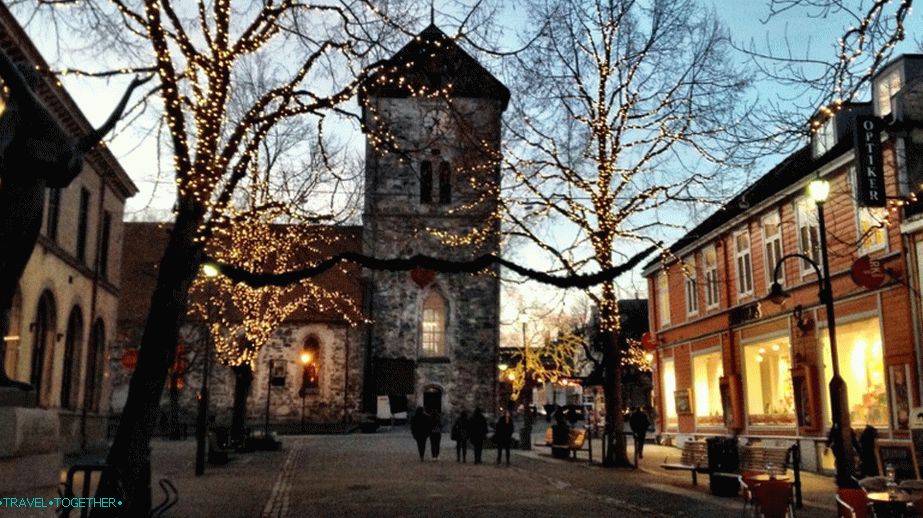 The Church of Our Lady is one of the oldest churches in the city, founded in the 12th century. 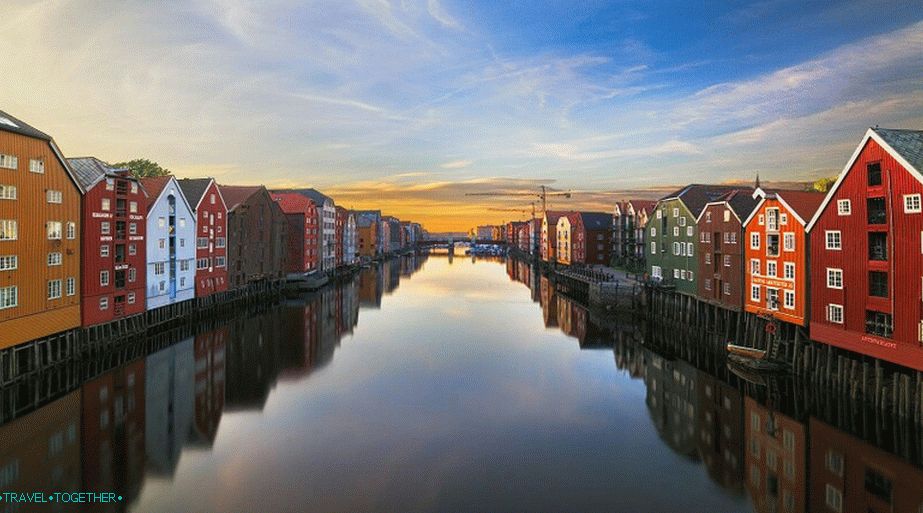 Berths is one of the symbols of Trondheim, the main photo postcard of this city. Despite the fact that the oldest buildings belong only to 18th century, moorings testify to a glorious commercial past cities. 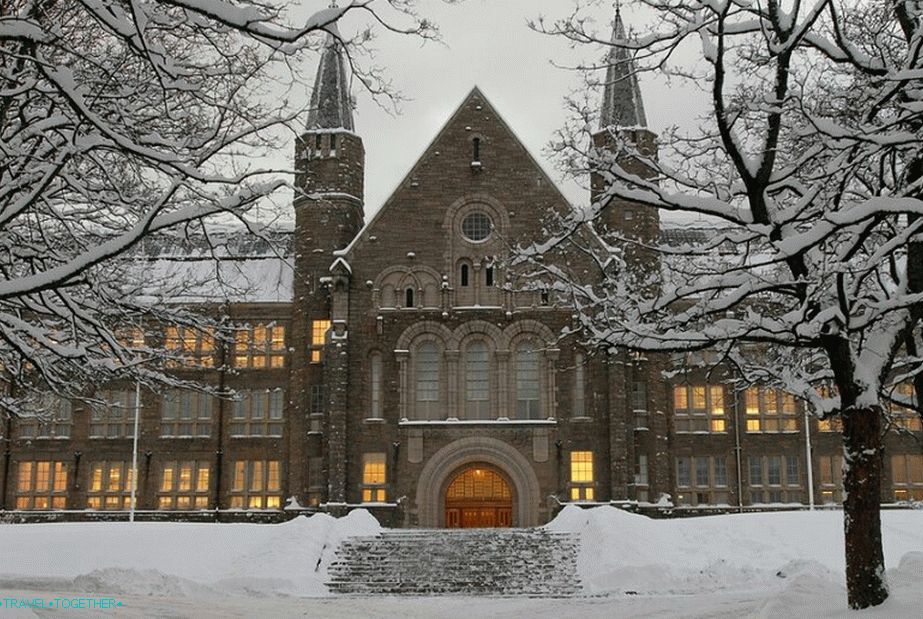 The university is one of the largest educational institutions in Norway. Trondheim is a real city of students. Students make up 17% population of the city.

Places of interest in Trondheim: 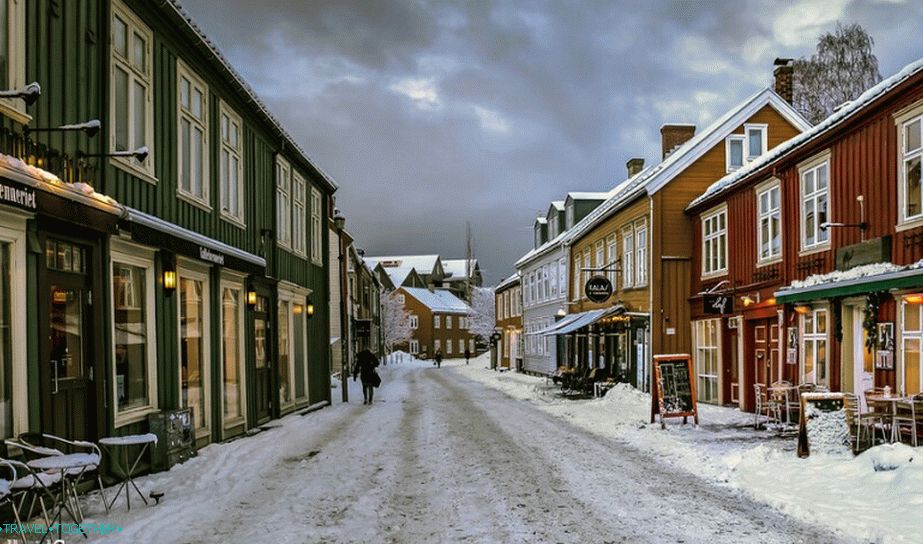 Trondheim on the map of Norway