Trieste, Italy – detailed information about the city. Guide to Trieste: popular attractions with photos and descriptions

Trieste – a beautiful seaside town in Italy on the coast Adriatic Sea, near Slovenia. The city is conveniently located along the perimeter of the Gulf of Trieste in the northwestern part of the Balkan the peninsula.

The importance of Trieste determined that the city was a bridge between Western, Central and Southern Europe, interestingly mixing Mediterranean and Central European. The territory of Trieste is mostly quite hilly. From the top city ​​hills offer beautiful views of Trieste bay

The climate of the city is Mediterranean. Summer is usually dry and pretty. hot, winter is mild, there are often fogs and strong blows winds. The history of Trieste begins in the 1st century BC. City mentioned by Caesar himself, and under Emperor Octavian received the first city ​​fortifications.

In the Middle Ages, thanks to its convenient location, Trieste became important shopping center. For the power over him was a struggle of many States: the Republic of Venice, the Habsburg Monarchy and Despite this, the real flourishing of the city began only in 18th century, when Charles VI declared Trieste a free imperial city. At that time, the city was not only one of the main the largest ports of the Mediterranean, but also the fashionable resort center of Austria-Vengri. Trieste is now a major tourist, educational and industrial center, seaport. This is a city with a rich and interesting. history and many attractions. His port today the largest and most important in Italy and one of the most important in Europe.

The main attractions of Trieste are: the United Square Italy, the hill of San Giusto, the ruins of the Roman Theater, the Grand Canal and Miramare castle. (Arco di Riccardo) – a small arch built in our 1st century era in the time of Octavian Augustus. The height of the arch is slightly more than 7 meters, width 5.3 meters.

Basilica of sv. Sylvester (Saint Silvestro) – Romance Basilica, one of the oldest churches of Trieste, built in 1100 year Grand Canal (Canal Grande di Trieste) – shipping canal in the city center, a kind of little “Venice”. Built by was in the second half of the 18th century. The main purpose of the construction of the channel – ability to reach the city center by water for loading-unloading goods. Initially, it was longer, but as a result the demolition of the old city its length decreased. Great here now place for walking. Two bridges were built across the canal. St. Spyridon’s Church – Orthodox Church in Neo-Byzantine style, built in the second half of the 19th century. The church belongs to the Serbian Orthodox community. Castle Miramare (Castel de Mìramar) – a beautiful castle, located on a picturesque cape on the Adriatic coast. Miramare Castle is one of the main attractions of Trieste. It was built in the second half of the 19th century. This is a former residence. Habsburg The castle is surrounded by a large park of about 22 hectares, which a large variety of plants, many of which are the archduke brought himself during a journey around the world, which he made in as Admiral of the Navy of Austria.

The Castle of San Giusto (Castello di San Giusto) is fortress-museum, located on the same hill. Castle byd restored in 2001. From here there is a beautiful view of Bay and Trieste. The first information about the fortress dates back to the 15th century. San Giusto castle served only for military purposes. 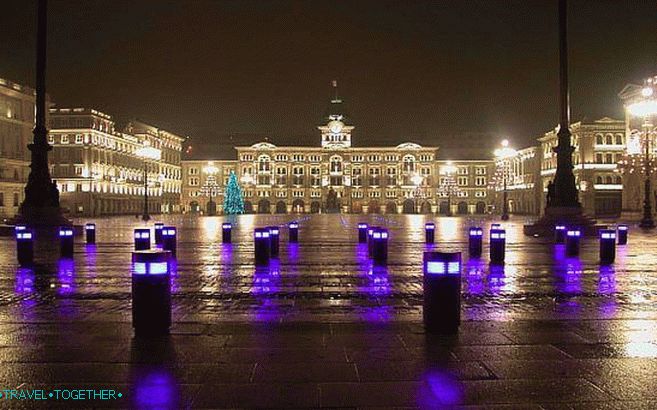 Unified Italy Square (Piazza Unità Italia) – main square of Trieste. It is located at the foot of the San Giusto hill. The square has a strict rectangular shape and one side. rests on the Gulf of Trieste. Along the perimeter of the square is surrounded magnificent palaces and public buildings. Installed on the square Fountain of the Four Continents (Fontana dei Quattro Continenti), which was made in the mid-18th century by Giovanni Battista Mazzoleni. The sculptural composition represents four allegorical sculptures that resemble the features of people who lived in the continents known at that time (Europe, Asia, Africa and America). Roman Theater (Teatro romano di Trieste) – the ruins of an old theater that are at the foot of san hill Giusto, in the center of Trieste, on the edge of the old city. Building The theater dates from the 1st century AD. At the time of construction the theater was outside the city walls, on the seashore. He could accommodate up to 6,000 spectators. For many centuries the theater was considered lost until it was discovered in 1814 during excavation site. Today it is still sometimes used to concerts. Cathedral of San Giusto (basilica cattedrale di San Giusto) – Cathedral, the main Catholic building in the city. The basilica is located on the hill of the same name, next to the castle San Giusto. According to scientists, the current form of the basilica found after merging the two former churches of santa maria and San Giusto in the first half of the 14th century. Status of Basilica Cathedral Received in 1899. The building of the cathedral has a strict facade, made Cremona craftsmen. The interior of the basilica contains unique ancient frescoes

Trieste on the map