Trier, Germany: the most detailed and complete guide to the city, Trier’s main attractions with photos and descriptions, location on the map.

Trier – the oldest city in Germany, located in the west of the country in the federal state of Rhineland-Palatinate. Based more than two thousands of years ago and nicknamed “Northern Rome”, Trier retained rich historical heritage, and such attractions as: The Black Gate, the terms of Barbara, the ruins of the old Roman amphitheater, Basilica of Constantine included in the list of objects UNESCO World Heritage Site. Roman history indeed found here at every turn. Despite some a provincial character, Trier was the most important city of Rome Empire north of the Alps.

The city is located in West Germany near the border with Luxembourg on the Moselle River. Trier is located almost in the center. river valley among picturesque hills covered with forests and slopes which grow vineyards. The climate is temperate. Annual average temperature is 9.4 degrees. For the year falls almost 800 mm precipitation. Most of them fall from October to December. Summer warm with an average temperature of 16-18 degrees, winters are mild with small frosts.

Trier was founded in the 15th century BC and was called “Augustus Treverorum “in honor of the emperor Augustus and the Celtic tribe Trever. Initially, this was the site of the Roman military camp, which had already turned into a large northwestern city by the 2nd century Roman provinces. In late Antiquity, Trier was one of most important cities of the northern part of the Roman Empire. Under Constantine The great city was greatly expanded and rebuilt. By the end of the 4th century became the largest city north of the Alps. In the 5th century, Trier was conquered by the Franks and the Huns. At the end of the 5th century, Trier became part of the kingdom of the Franks. AT 9 century was captured by the Vikings and almost completely destroyed. AT 957 the city received market rights, and in 1212 the rights Imperial city, becoming one of the main cities in the region. In 1512 the Reichstag took place in Trier. During the Thirty Years War the city was conquered twice: first by the Spaniards, and then by the French. The French again occupied Trier in 1673. Interesting that before the start of 18 centuries French troops occupied the city four more times. During the Napoleonic Wars, Trier belonged to France. In 1816 year was occupied by Prussian troops. In the 19th century, the city grew far beyond the limits of the medieval walls, so it was soon decided city ​​fortifications to demolish. World War II Trier was significantly damaged by bombing and artillery. Was destroyed 1600 historic buildings.

The nearest airport is in Luxembourg 50 km from Trier. AT 210 km is located Frankfurt Airport. Get out Frankfurt am Main to Trier can be on trains that go through Koblenz and Saarbrücken. The A6 motorway is suitable for the city. 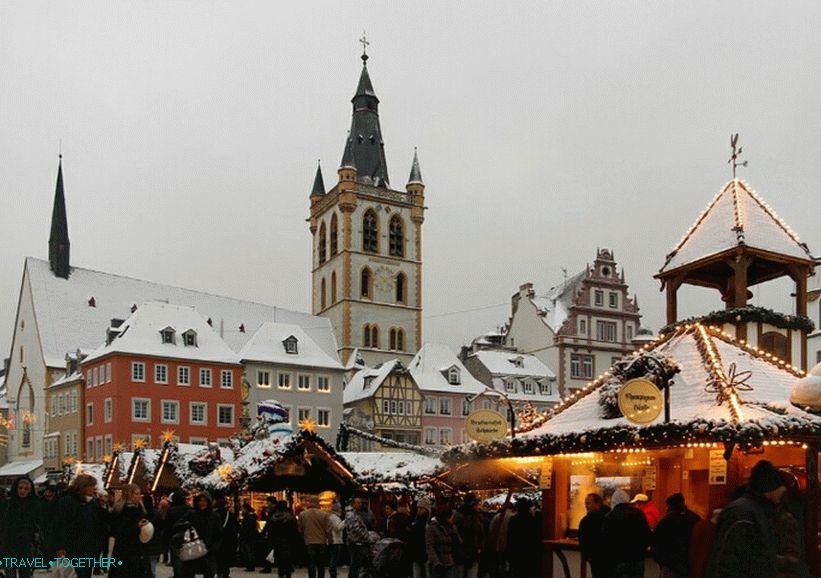 The main attractions of Trier. 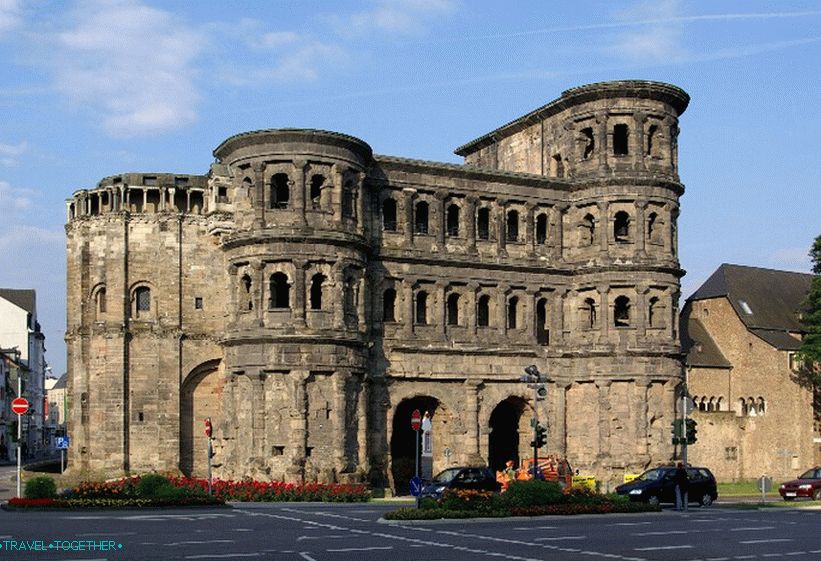 Porta Nigra or the black gate – a symbol and the main landmark of Trier. This is an ancient grand antique the building was built in 180 AD and served as a pass point to the city. The gate has a height of 30 meters, a length of 36 meters and stacked from huge blocks of sandstone that have darkened from past centuries. Many believe that it was dark color that gave them such a name, although there are alternative points of view. The facade of the black gate is decorated with columns. In the Middle Ages to the gate a church was added. The east tower and church buildings were dismantled by order of Napoleon. Porta Nigra are the most large and well-preserved Roman heritage of this type north of the Alps. 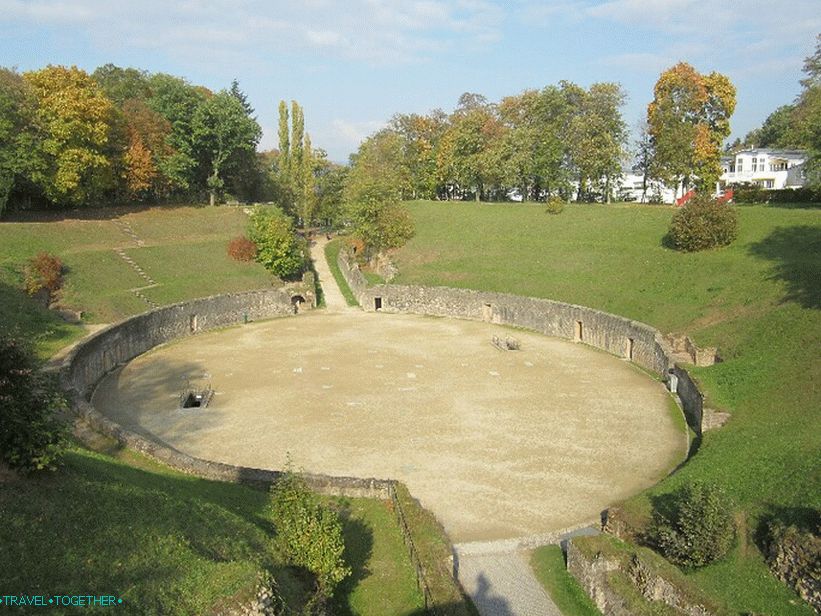 Amphitheater – another legacy of the Roman period, the ruins arenas built in the second century AD for gladiatorial fights This historical monument is located behind the medieval city by the wall. The amphitheater can accommodate about 20,000 people. The arena was surrounded protective wall and openings for animal cages. Under the amphitheater there was a basement where prisoners and animals were kept, and mobile platform mixed them into the arena for fighting. 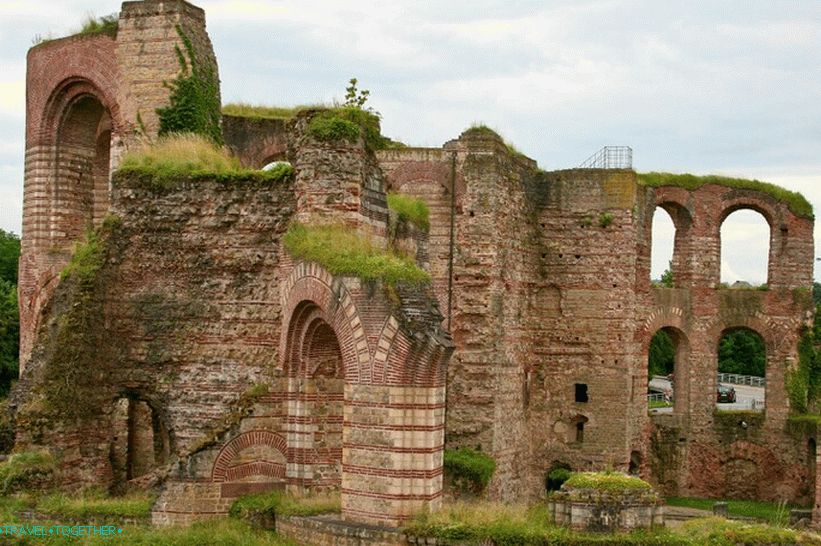 The imperial baths were built in Trier in late antiquity more 1600 years ago. These were some of the most impressive and greatest roman baths in the world. For the Romans, baths were not only a place for swimming, here it was possible to play sports, play, relax, get medical procedures, read and even do business. Cold water was heated by six stone cauldrons to about 40 degrees.

Other interesting structures of this type are terms. Barbara. These baths were built a little earlier – in our 2nd century era. These terms were the second largest, after Trajan’s baths Rome 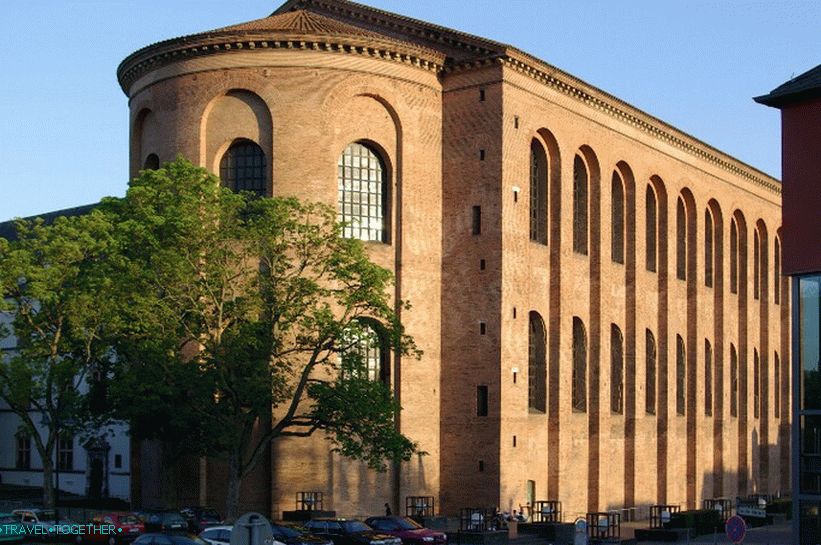 Basilica of Constantine – one of the largest Roman buildings since Trier. Originally the imperial throne room was built in antiquity and in the middle ages was used as one of the residences of the bishop. The building has the following dimensions: width – 27 meters, length – 67 meters, height – 33 meters. Trier Cathedral – an impressive complex of sacred architecture, which is built on the foundation of the ancient emperor’s palace Constantine. The cathedral is the oldest episcopal church in Germany. and one of the oldest Christian buildings in Europe. Palace Constantine was rebuilt into a church in the 5th century. In the guise of a cathedral before so far numerous Roman elements can be found. After destruction in the fifth and ninth century the cathedral was received by the Romanesque look. By 1200, the Romanesque church was completely rebuilt in gothic style. 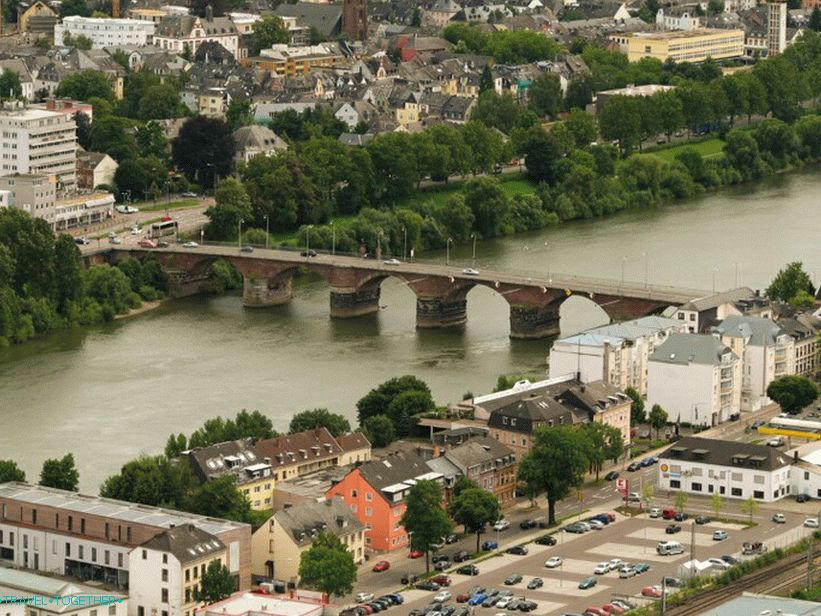 The Roman bridge is the oldest bridge in Germany, built in the 2nd century. The arches and the roadway were built on Roman foundations in the 18th century. The dark color of the old stone foundations is genuine, since this is basalt. The bridge miraculously did not blow up during World War II of war. Abbey of sv. Maximiana – ancient imperial abbey, which was one of the most important on the territory of the Holy Roman empire. This monastery was disbanded after the French revolution. Under the old church building is an ancient a cemetery with several hundred graves and stone sarcophagi. The Church of Our Lady or Liebfraukirche is one of the oldest Gothic churches of Germany, built in the 13th century. Church was built on the foundations of an ancient Romanesque church, when in the 12th century the southern part of the building was demolished and replaced by the early Gothic structure. Interestingly, some of the gothic columns stand on the foundation of the Roman pillars, but nothing else in the church is Roman heritage. 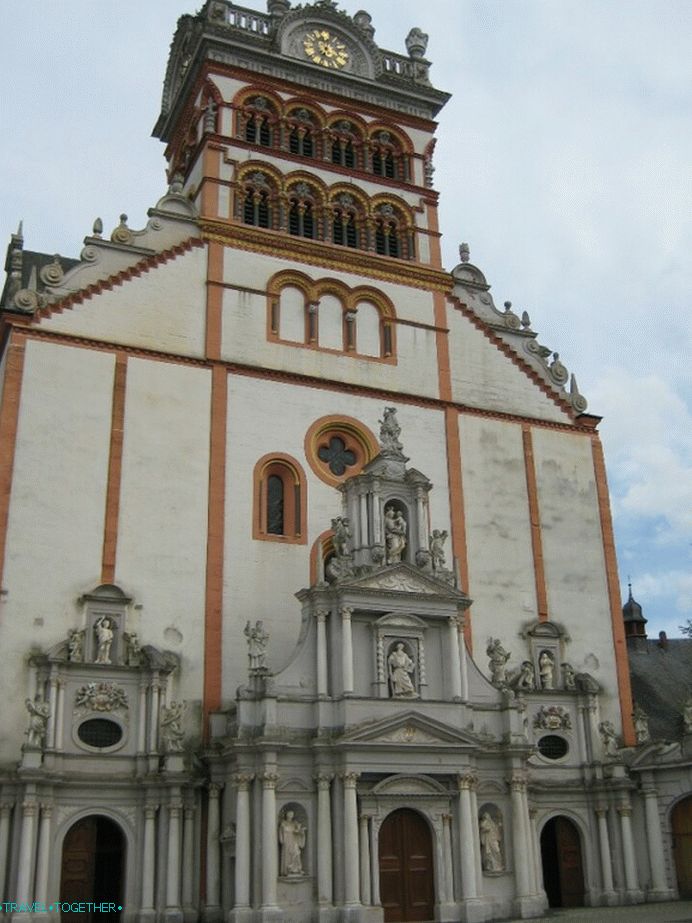 Basilica of sv. Mathias – located in the southern part of the old city and was part of an ancient abbey. This is one of the most significant sacral structures of Trier, which contains art treasures and is considered one of the first Christian structures in Gaul. This church was built in the 12th century. Argued that the relics of the Apostle Matthew are located here. The gothic church was completed in 1160. In the 17th century basilica got the features of baroque. Beautiful portals were built during French and Italian style in the 18th century. Church of sv. Gangolf was built in the early 15th century. This beautiful late gothic structure is located in the heart of the old cities are practically on the market square. It is sometimes called a market by the church. The tower is 62 meters tall was attached a century later. 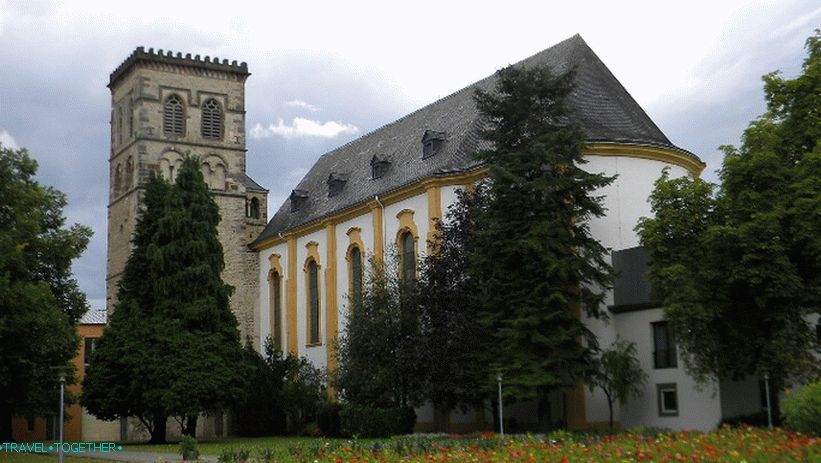 Church of sv. Irminena was built on the site of the ancient Roman warehouses near the Moselle River. After the collapse of the Roman Empire, they fell into the hands of the Frankish kings who handed them over to the bishop who founded here is a Benedictine monastery. The modern look of the church received in the 18th century. Church of sv. Paul’s – this former monastic church is located in the northern part of the old town. The interior is very stand out ceiling paintings and sculptures. The first church was built at 11 century. The modern look received after the restructuring in the 17th century.

Other sights and attractions of Trier The main market is the center of medieval Trier and the heart of the old cities. After the Viking raid in the 9th century, the bishop moved the market area from the river bank to this place. This is the most beautiful area cities with wonderful architecture. In addition to many historical buildings here is located the fountain of sv. Petra, built at the end of 16 century. 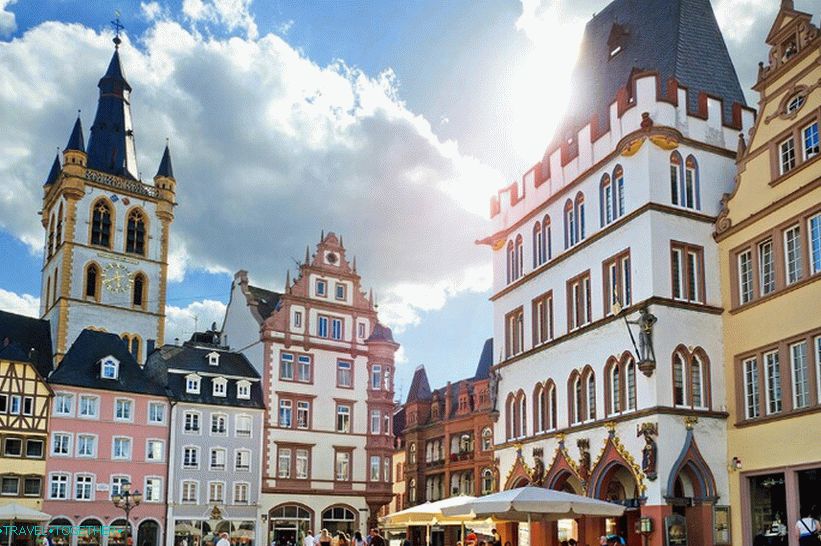 Steipe is the representative house of the city council located at the corner of the market square. The building was built at the end of the 15th century and It was destroyed during the bombing of the Second World War. Restored to 70s of the 20th century.

Another interesting historical building is the red house, on the facade of which there is an inscription that Trier is 1,300 years older Of rome But it really is not confirmed by anything. legend. 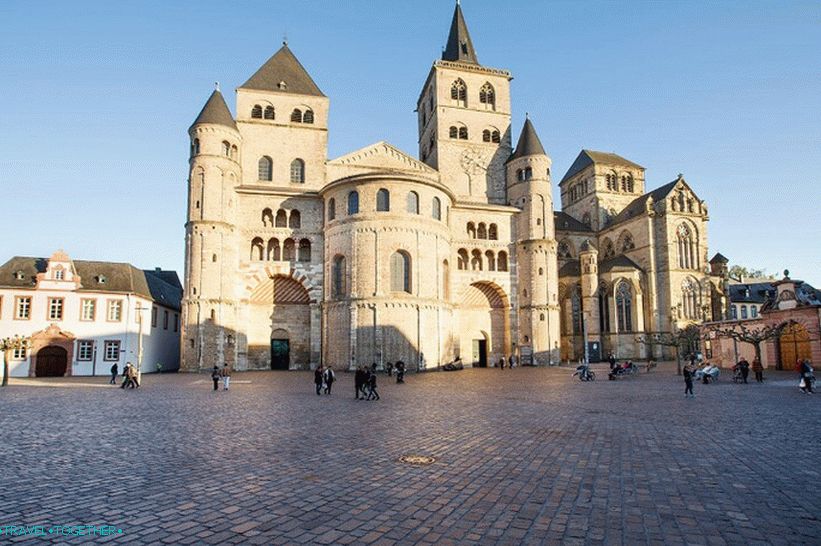 Cathedral Square – a square with a magnificent view of the Romanesque facade of the Cathedral of Trier. It was founded in the early Middle Ages.

Another interesting place in Trier is the Kornmarkt square. It is located near the main market and is considered one of most beautiful squares of the old city. The area is located in the center pedestrian area and is surrounded by restaurants and shops. 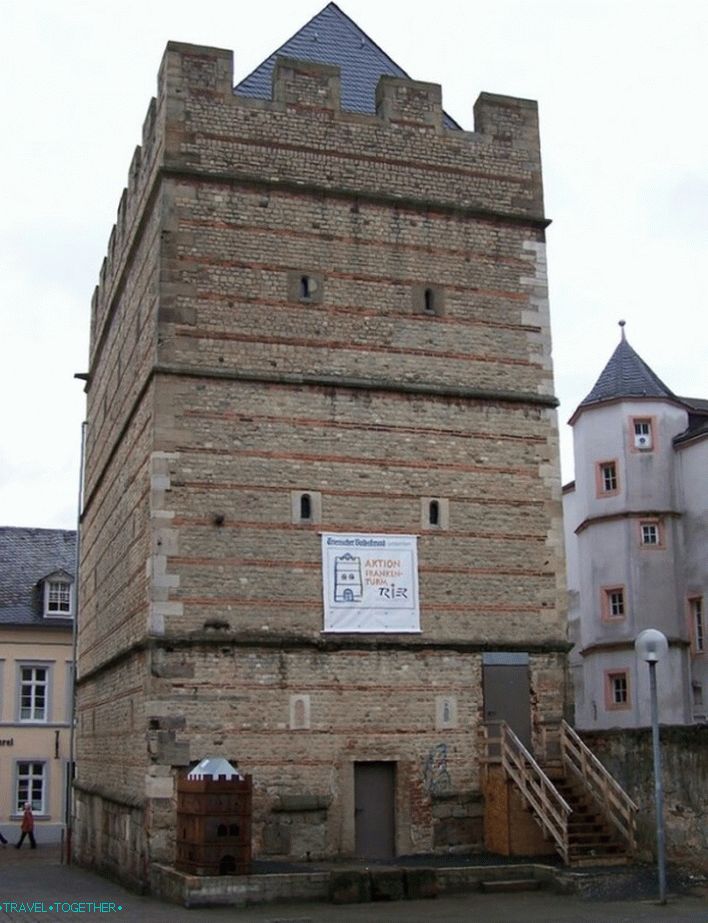 Franco Tower – a medieval tower of the 11th century, located near the main market. The tower is built in typical Romanesque style of stone and brick. Interestingly, in the 14th century the tower was residential.

Trier on a map of Germany