Toulouse (France) – the most detailed information about the city with photos. The main attractions of Toulouse are with descriptions, guides and cards.

Toulouse is a city in the south of France and the capital of the Occitania region. Located in the heart of the French southwest, near the Pyrenees, halfway between the Atlantic and the Mediterranean. Toulouse – one of beautiful cities of France with interesting brick architecture, rich history, sunny climate, friendly and laid-back the atmosphere. La Ville Rose (translated as “pink city”) – so called Toulouse because of the terracotta brick from which it is built many old buildings of the historic center.

Toulouse was founded on the site of an ancient Roman settlement. AT The Middle Ages was a popular pilgrimage and religious site. center of southern France. Basilica Saint-Sernin was one of stops on the way of sv. Jacob and now included in the list of objects UNESCO World Heritage Site. Now Toulouse is an important scientific industrial and cultural center of the country.

Toulouse is located on the banks of the River Garron, 680 km from Paris. The old town occupies the right bank, and on the left there is a suburb Saint-Cyprien. Climate is subtropical (Mediterranean). It is characterized by hot summers and mild winters.

The history of Toulouse is more than two thousand years old and it is one of the oldest cities in France. Back in the pre-Roman period here there was a Gallic settlement of Tolosa, which in 106 BC was captured by the Romans. From the 4th century AD Toulouse is the residence the bishop. From 419 to 507 years – the capital of the kingdom of the Visigoths. AT the beginning of the 6th century Toulouse was captured by the Franks. 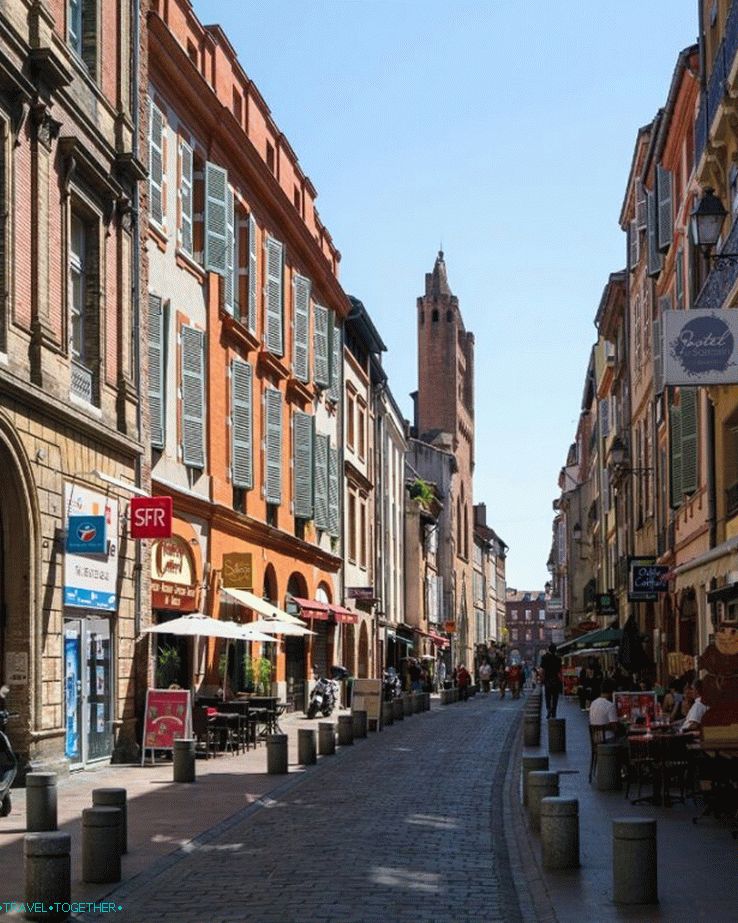 In the future, the city was the center of the Kingdom of Aquitaine. In 721 year was besieged by the Saracens, but survived. From the second half of the 8th century Toulouse – the residence of the graphs of Toulouse, who practically controlled the whole south of France. In the Middle Ages, the city flourished and was important center of pilgrimage, as it was on the religious path of St. Jacob 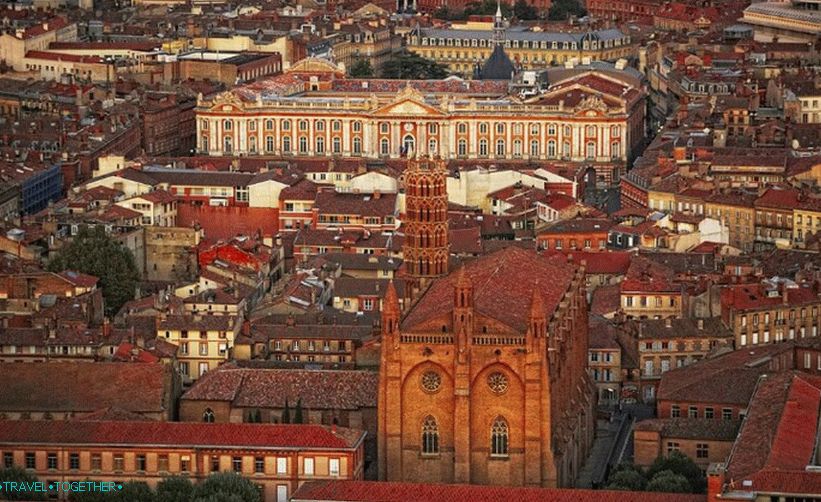 In 1214 the Dominican Order was founded here. 1217-1218 Toulouse’s years were besieged and taken by the crusaders. In 1229 was founded by the University of Toulouse. In 1271, Toulouse became part of Kingdom of France and the center of the province of Languedoc. 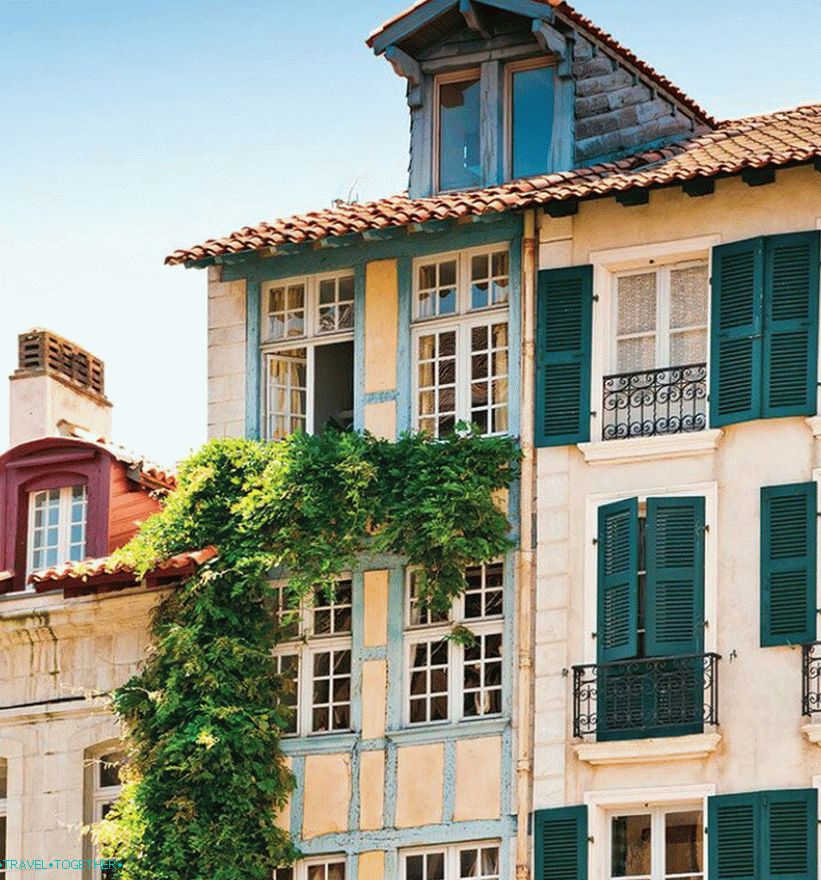 In the 16th century (during the Huguenot Wars) Toulouse was a stronghold Catholics. In the future, the value of the city decreased. Everything has changed recently. In the 20th century, Toulouse became the center of the French aircraft industry, and Charles de Gaulle ordered to place here National Space Research Center. This contributed economic recovery and population growth. Saint-Sernin – the ancient Romanesque basilica and the object of the World UNESCO heritage. Is one of the most beautiful churches on medieval religious way of sv. Jacob in Santiago de Compostela. Saint-Sernin was built between the 11th and 13th centuries from red brick typical of Toulouse architecture.

The building has a five-nave structure and a three-nave transept in Romanesque style. Basilica is dedicated to St. Saturin (Sernin), who was tortured in Patras (Greece). His tomb is located in the apse. Interesting features Saint-Sernin: a magnificent Romanesque facade, portal with sculptures, a beautiful choir of the 17th century, a huge carved Romanesque crucifix in the north transept, 11th century marble reliefs and a crypt with religious relics. 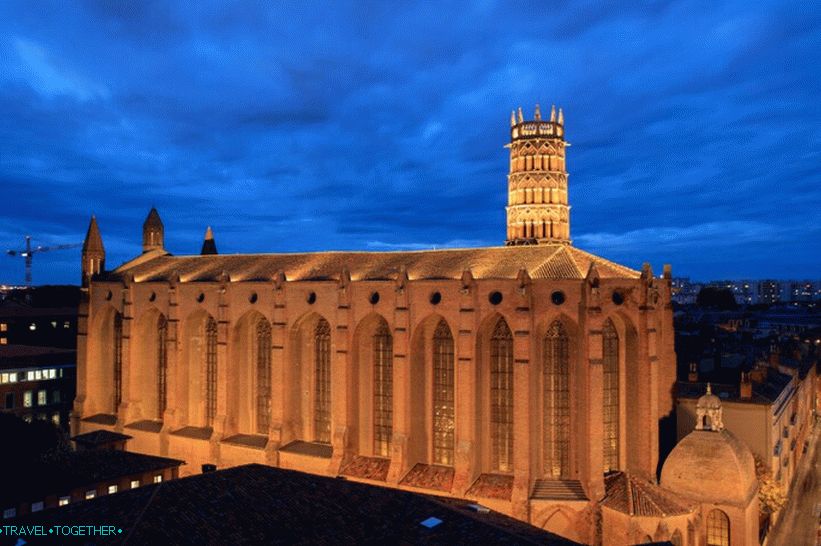 The Dominican Monastery is a fine example of the South Gothic architecture. It was founded in the 13th century and is completely built of red. brick. The tower of the monastery church recalls the architecture of the tower Saint Sernin. The monastery has a strict appearance and exquisite internal architecture. Chapel of sv. Anthony decorated with paintings 16 century. The relics of St. Thomas Aquinas are also kept here. Capitol Square is the lively center of Toulouse, which has exquisite classical architecture. On the west side of the square You can look at the beautiful arcades. On the east side is The famous 18th century Capitol building with impressive halls. Behind the square is an ancient defensive tower of the 16th century, and south charming streets of the old town. 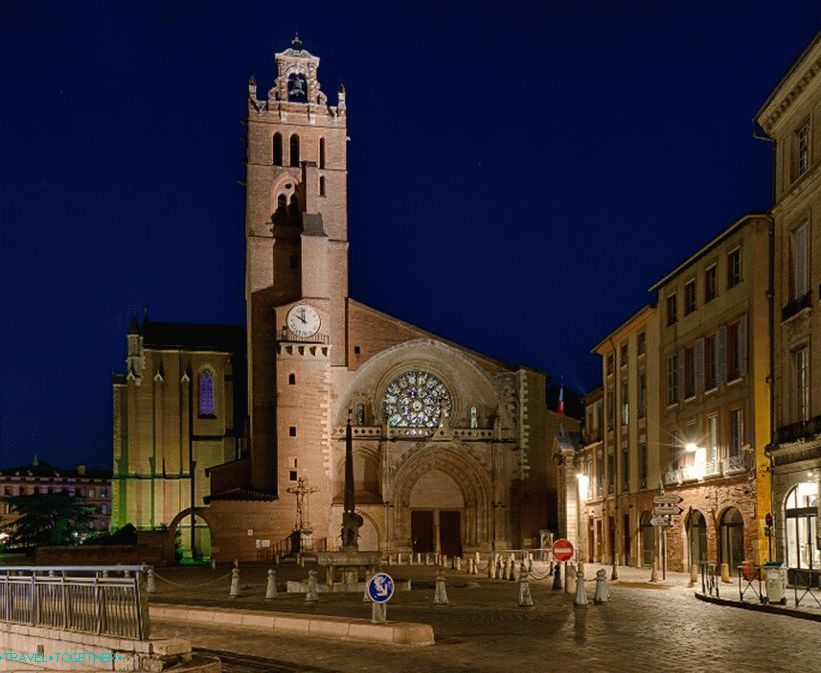 Saint-Etienne – the cathedral, which was built several centuries and has features of several architectural styles. The first church on this site was built at the end of the 12th century in the style southern gothic. Later the cathedral was rebuilt in the north gothic style to compete with the magnificent cathedrals of the North Europe. In the structure of the church stands a massive tower, a huge rose window with stained glass windows and intricate decorative elements of the facade. Inside you can see 17 chapels and beautiful tapestries 16 – 18 centuries. 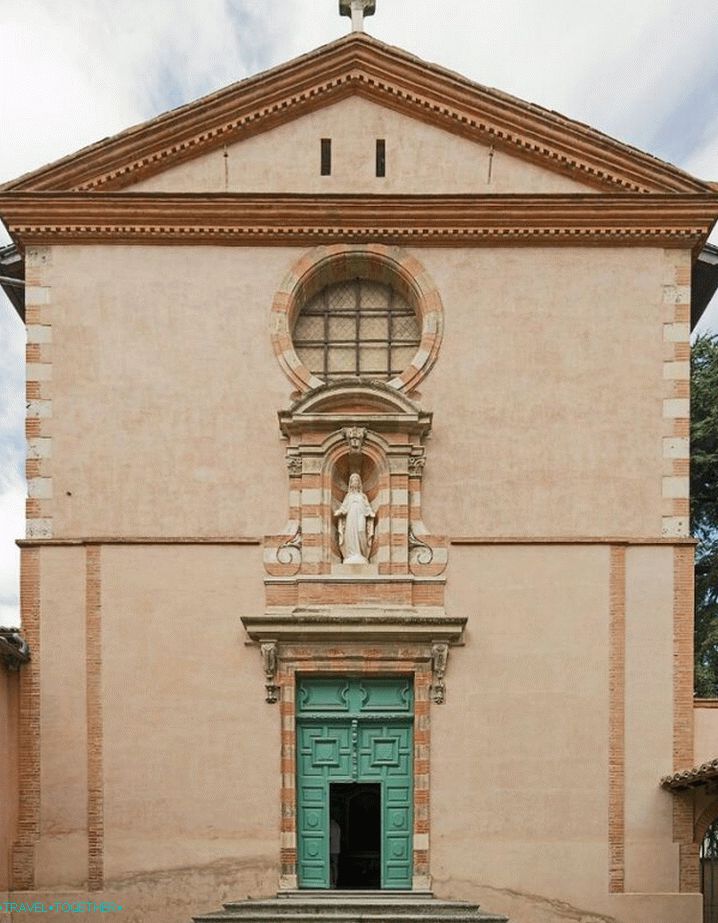 The Carmelite Chapel is a small religious building with magnificent paintings inspired by the Sistine Chapel. The chapel was built in the 17th century and was part of the Carmelite a monastery that was destroyed during the French revolution. 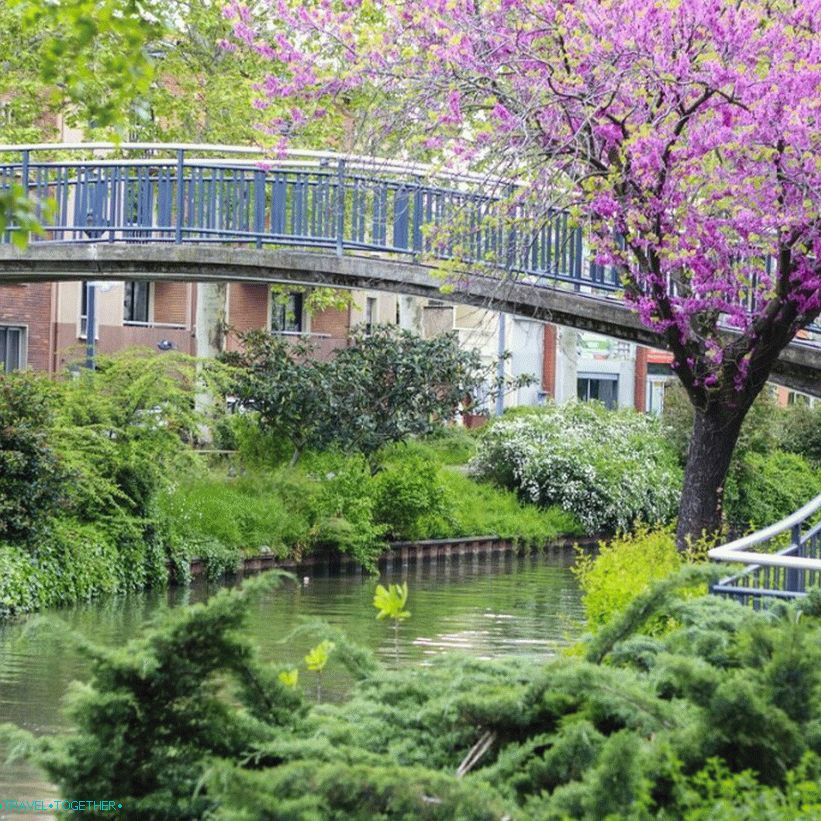 Canal du Midi – hydraulic structure 240 km long, built in the 17th century and connecting the Atlantic Ocean and Mediterranean Sea. Here you can enjoy a leisurely walk and relaxing atmosphere. Capella St. Joseph – a beautiful 17th century chapel that is main attraction of Saint-Cyprien. She was once part of the medieval hospital where the victims were housed the plague. 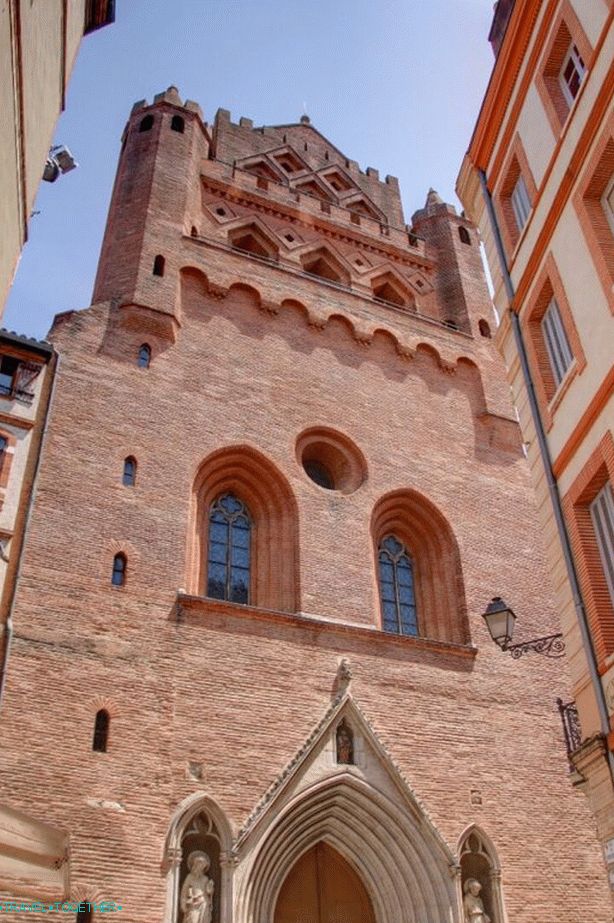 Notre Dame du Taur – an old church with an unusual bell tower. Built from pink bricks in southern gothic style. According to legend the church stands on the spot where the body of the first bishop of Toulouse fell – Cernin, who was killed by the Romans and tied to a bull, letting the animal by the city. 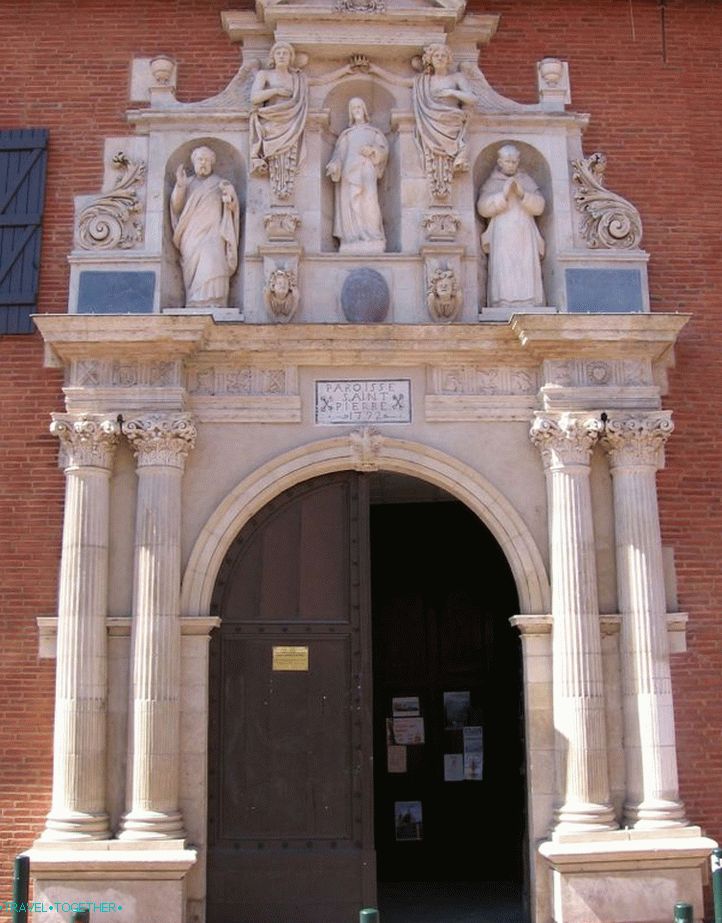 Church of Saint-Pierre – a religious building of the 17th century, built Cartesian monks. The church is decorated with magnificent sculpture. 18th century, frescoes and stucco bas-reliefs. 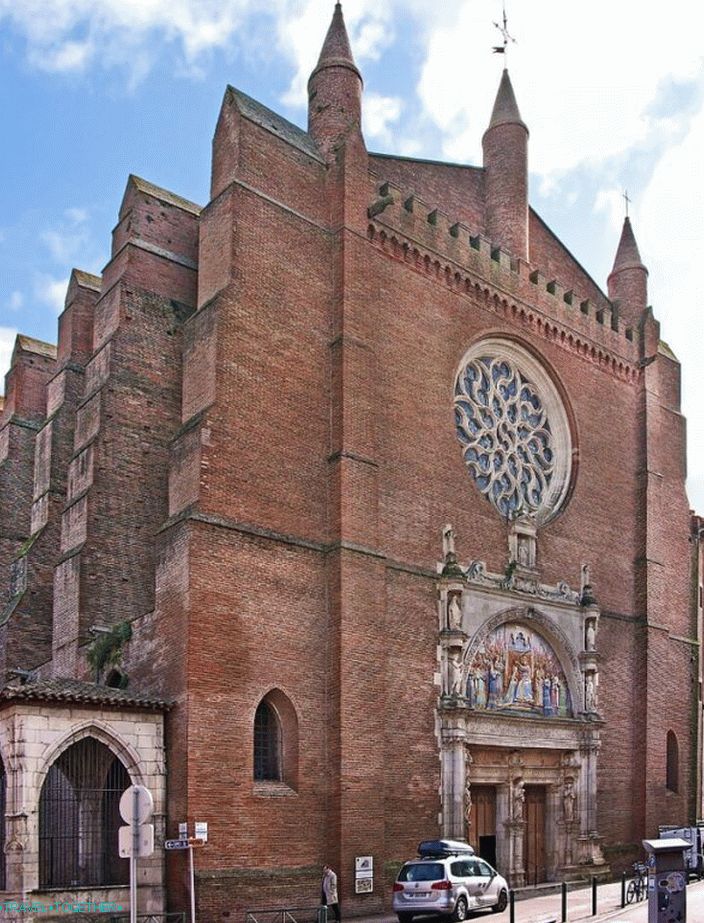 Notre Dame de la Dalbade – an ancient church with a very beautiful portal located in the heart of the quarter of Carmes. Church history dates back to the 6th century. The building was completely rebuilt in the 15th century. after the fire. Until 1926 the church had the highest bell tower in city ​​until it collapsed. 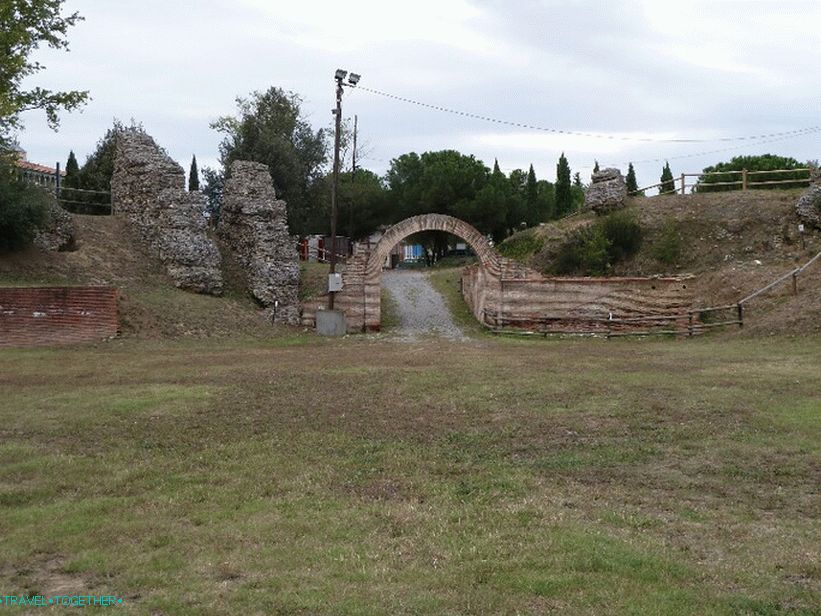 Ruins of the Roman Amphitheater – the only antique monument Toulouse The amphitheater was built by the Romans in the 1st century AD. and used for gladiator fights until the end of the 4th century. Notre Dame de la Daur – the imposing basilica located on coast Garrony. It was built in the 5th century on the ruins of a Roman temple. AT The 9th century became part of the Benedictine monastery. The old church was demolished in the 18th century and completely rebuilt. 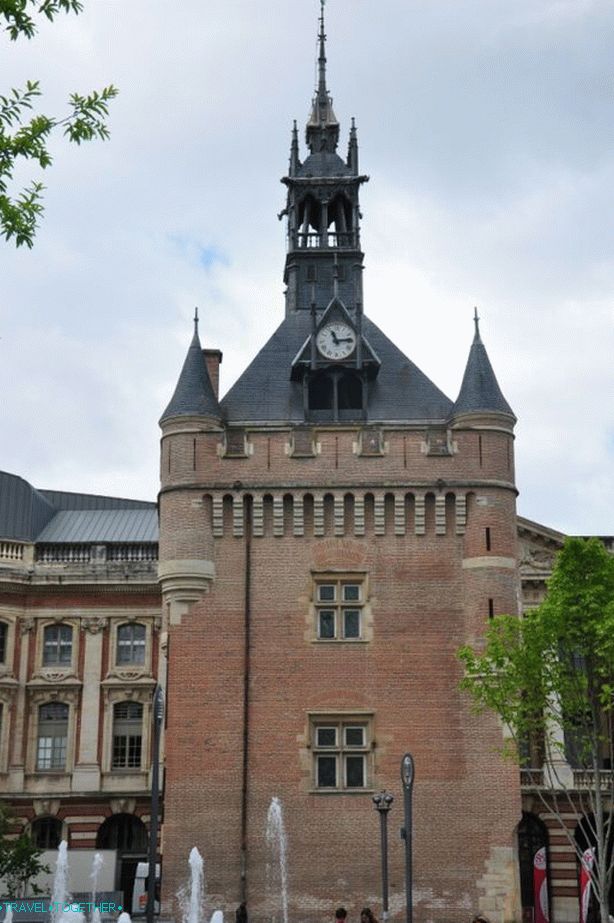 Toulouse on the map of France