Thessaloniki (Greece) – detailed information about the city with photos. The main attractions of Thessaloniki with a description, guides and cards.

Thessaloniki (Thessaloniki) – the second most populous city Greece, located in the north of the country in the historical region Central Macedonia. Is the administrative center decentralized administration of Macedonia – Thrace and major seaport. Thessaloniki is a beautiful city with a pleasant a cosmopolitan atmosphere in which you can find many monuments of antiquity, admire the ancient Byzantine churches, listed as UNESCO World Heritage Sites, sit in cozy cafes and enjoy traditional Greek the kitchen.

Thessaloniki is considered the cultural capital of Greece. The city is famous bright and rich cultural life. Also located here the largest university in the Balkans, which attracts a lot of young people. Thessaloniki is a city with an ancient and rich history. The look of the old city was formed by the ancient Greeks, Romans, Byzantines and the Ottomans. Therefore, you can see here as ancient monuments ancient period, and much more modern structures.

Thessaloniki is located on the northern edge of the Thermaikos Bay (Aegean Sea) and in the southeast are limited to the mountains of Hortiatis. The climate is subtropical. Summer is quite hot and dry with medium temperatures of 25 – 27 ° C. Winter is cool with rare negative temperatures. Sea temperature from July to September is 24 – 26 ° C. You can swim from May to October. Thessaloniki was founded in 315 BC. Macedonian king Cassander He named the city after his wife, Thessalonica, who was the sister of Alexander of Macedon. In 146 BC Thessaloniki were captured by the Romans. After the collapse of the Roman Empire, the city became part of Byzantium. Thessaloniki was located at the intersection of important trade routes from Constantinople to Rome and from the Black Sea coast of Athens. it provided the city with rapid growth and wealth. 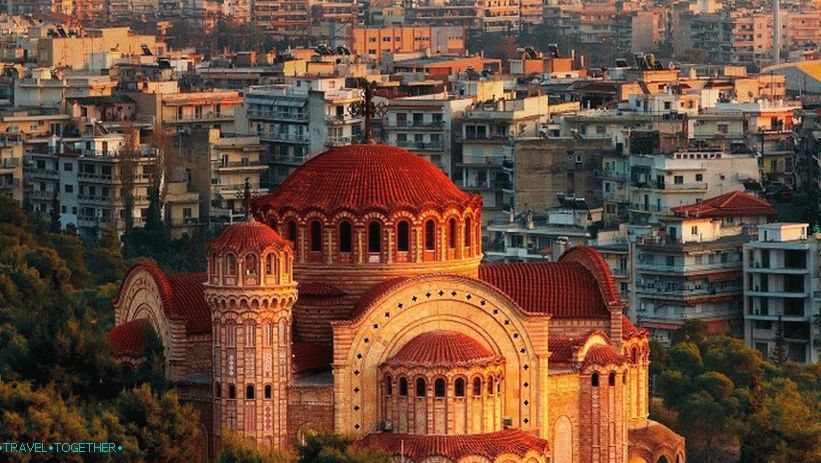 In 6-8 centuries Thessaloniki tried several times to take the Goths and Slavs. In 904, the city was seized and plundered by the Saracen pirates. Most of the inhabitants were sold into slavery. At the end of 10 centuries Thessaloniki was captured by the Bulgarians, and at the end of the 12th century – the Normans. In 1204, the city became the capital of the Kingdom of Thessaloniki. However, already in 1246 this state was subordinated to the Nicene an empire. In 1387 the city was captured by the Turks. Ottomans ruled Thessaloniki until 1402, when after their defeat in the war with Tamerlane returned to Byzantium. In 1430, the Ottoman Empire regained control of the city. Behind the period of Ottoman rule Thessaloniki turned into one of the largest cities of Greece. At the same time, the ethnic and religious composition. The Greek nobility assimilated with the Turks, I learned Turkish and converted to Islam. More than half the population belonged to the Spanish Jews. The main language in the city has become Ladino. The Greeks were only 1/5 of the number of residents of the city. Large part of them died during the military conflicts of the Middle Ages. AT The city also lived a lot of Turks. Here, for example, was born the famous Mustafa Kemal Ataturk.

The Greeks regained control of Thessaloniki in 1912. During World War II the city was occupied by German troops. AT the result of the outflow of the Turkish population and the genocide of the Jews, arranged by the fascists, Thessaloniki became completely greek

The central part of Thessaloniki, located inside the Byzantine walls, forms the oldest part of the city. It is divided into two parts: the main commercial area and, in fact, historical Centre. The historical core of Thessaloniki is called Ano Poli. or Upper Town and declared a UNESCO World Heritage Site. This area has hardly suffered during the devastating fire. 1917 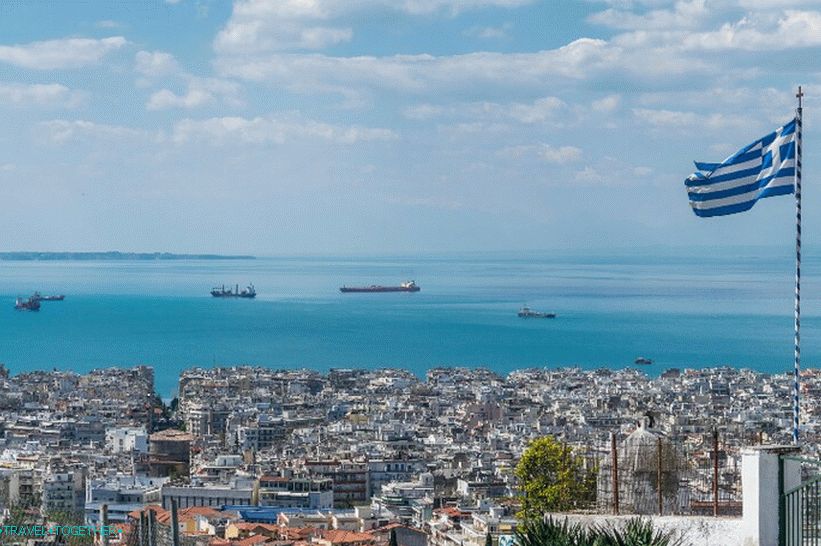 Ano Poli is located on the top of a hill. This atmospheric quarter characterized by steep, winding streets, several artifacts of the Roman period and the scattering of ancient Byzantine churches. The numerous fountains of the Ottoman era are reminiscent of Turkish influence. Odós Olympíados Street connects the Upper Town with Lower, as well as with the old city walls and the citadel. An interesting feature of the historic center of Thessaloniki is sections of the old fortress walls. The first walls were erected around cities immediately after its foundation. Later they were strengthened. during the reign of Constantine. In the 14-15 centuries, the Ottomans already built additional defenses and towers. By the 19th century Thessaloniki was completely surrounded by powerful fortifications. Their length was 8 km. Later, the Ottoman government decided to dismantle the ancient walls that held back the growth and development of the city.

Start a tour of the old fortifications better from the cemetery Evangelistria north of campus. Here you can look at the massive 15th-century tower of Trigonion, the tower of Anna with a gate leading to the citadel, on the site of the ancient acropolis. 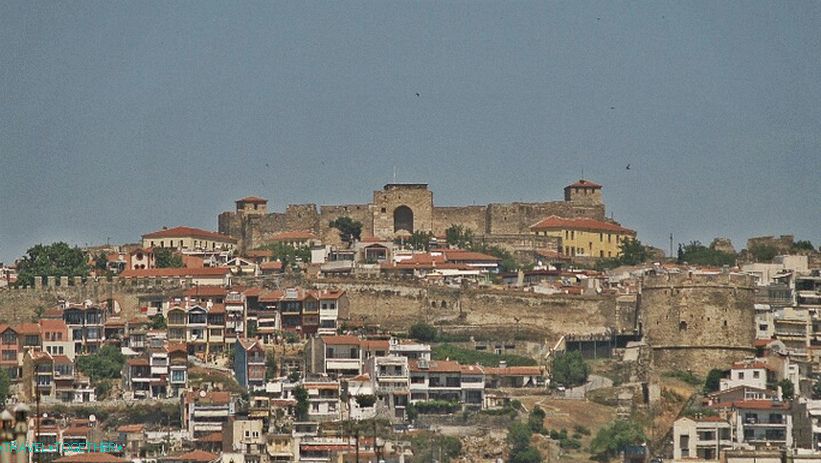 Heptapirgion – the fortress of the “seven towers”, located in the high point of the Upper Town. It is believed that the northern towers were built at the end of the 4th century, while the five southern ones – at 12 century. Until the end of the 19th century, the fortress was defensive construction, and then 100 years was used as a prison. The White Tower is the most recognizable landmark of Thessaloniki, located on the picturesque waterfront. The tower was built in 1530 year by the Ottomans to protect the city from the sea and was part of urban fortifications. In the Ottoman period there was a prison and a place numerous torture. Because of this, the building was called “tower blood “. Later it was symbolically repainted white and called the “White Tower”. Today you can climb the tower and enjoy the magnificent panorama of the harbor and the city. Inside is a collection of the museum of Byzantine culture: early Christian coins, vases, mosaics, wall paintings. 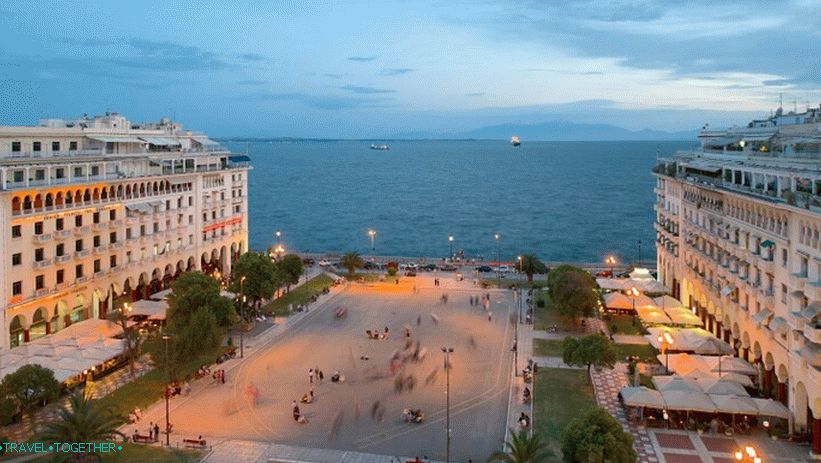 Aristotle Square is the main square of Thessaloniki, designed by in 1918 by French architect Ernest Hebrard. Ladadika – a historic district near the port with colorful 19th century buildings and provincial Mediterranean charm. A few blocks from the square of Aristotle are the ruins Roman Forum (most likely the ancient agora). Center for Public and The political life of the ancient Thessaloniki, built in the 1st century AD and discovered by chance includes two Roman baths as well a small theater that was used for gladiator games.

The Arch of Galerius is an ancient Roman monument built at the end of 3 Century AD in honor of the victory over the Persians. This building was the main entrance to the city. The arch had four flights and a marble facade, decorated with complex reliefs. Preserved to our time two flights and parts of reliefs, which, by the way, are much preserved better than the arch of Constantine in Rome. Rotunda Galeriya (Church of St. George) – the most magnificent ancient monument of Thessaloniki, built at the beginning of the fourth century as a mausoleum for the emperor of the same name. Byzantine Emperor Theodosius at the end of the 4th century turned the mausoleum into a Christian church. In the Ottoman period, the building was converted into a mosque. In 1912 the rotunda became a church again. The rotunda has a cylindrical dome architecture, similar to the Roman Pantheon. Dome has the diameter is 24 meters and the height of the rotunda is 30 meters. Inside the dome adorn the magnificent mosaics.

Basilica of sv. Dimitri – the main religious building Thessaloniki, located north of the Roman Forum. it the magnificent Byzantine basilica was built in the fifth century on the place of the early Christian church not far from the ancient Roman bath. Fragments of the bath are still visible on the north side of the building, and in the crypt You can see the remains of the Roman road. The church was named after the patron saint of the city of Dimitri, who was imprisoned and executed here in 306. For centuries, pilgrims came from all over Byzantine Empire to worship the relics of the saint who kept in the sarcophagus in front of the iconostasis. The church has the rich interior decorations. The Ottoman period was transformed into mosque. The Church of the 12 Apostles – a beautiful Byzantine brick 14th century church located on the edge of the old town, near from the Byzantine walls. In the Turkish period, the building was used as mosque. The church boasts exquisite murals and mosaics. Late Byzantine period that were discovered during restoration work in 1940. On the north side is tank belonging to the former monastery. Church of sv. Sofia is one of the most important historical churches of the city. The first religious building was built in 8 century. In the 9-10th century, the church was decorated with expressive curly mosaics. From 1204 to 1430 the religious building had the status cathedral. In the Ottoman period it was located mosque. The original building did not survive after a big fire in 1917 Church of sv. Paul’s – the majestic modern church in style historical Byzantine architecture, built in 1922 on place of a small chapel of the second half of the 19th century. According to legend The church is located near the source where the apostle Paul drank water. Church of sv. Catherine – late Byzantine church, located in the northwestern part of the Upper Town. During the period The reign of Sultan Bayazid II was transformed into a mosque.

Church of sv. Panteleimon – religious building of the period late Byzantium, built in the 13-14 century. Located in the east parts of the old town near the arch Galerius. The temple of Osios David is a small Byzantine church, which was part of the monastery Latomu. It was built at the end of the 5th century and known for magnificent mosaics and frescoes 12 – 14 centuries. Church of sv. Nicholas Orfanos – a small Byzantine church early 14th century, famous for its frescoes. Unlike most of the ancient churches of Thessaloniki has not been transformed the Turks to the mosque. Vlatadon Monastery – an ancient Byzantine monastery of the 14th century, which is considered one of the oldest and most important monuments of the Byzantine period in Thessaloniki. Known collection Byzantine Icons. Basilica of Achiropitos – early Christian basilica of the 5th century. Considered one of the most prominent examples of the early Byzantine architecture and is known for its impressive frescoes and mosaics. Bey Hamam – the oldest of the Ottoman baths in Thessaloniki with colorful wall paintings and marble basins. Was built in 1444 year during the reign of Murad II. Thessaloniki on a map of Greece