Tbilisi (Georgia) – the most detailed information about the city with photos. The main attractions of Tbilisi with a description, guides and cards.

Tbilisi – the capital of Georgia, located in the eastern part of the country on the banks of the Kura (Mtkvari). It is an ancient city, founded in the 5th century, in which now live more than 1 million people. Tbilisi is one of the most charming cities of the Caucasus, where among the narrow atmospheric the streets, cozy old courtyards and crooked houses hidden amazing attractions and unique treasures. Despite the fact that for its one and a half thousand-year history of Tbilisi was destroyed and rebuilt a few dozen times, the old town has kept medieval charm and pretty much its original state.

Tbilisi is located in the center of Eastern Georgia in a hollow, limited by the spurs of the Trialetsky Range, the Saguramsky Range and Yori Highlands. Climate is temperate continental with relatively hot summers and cool winters. Due to its proximity to warm seas (Black and Caspian) and the Greater Caucasus Mountains, which blocks the invasion of air masses, the climate of Tbilisi is warmer than in cities in the same latitudes. The average annual temperature is 12.7 degrees. The coldest month is January with temperatures around 0. The average summer temperature is over 20 degrees.

The best time to visit Tbilisi is from May to October. AT July and August can be quite hot. To enjoy Tbilisi without tourists it is better to come in winter or early spring. 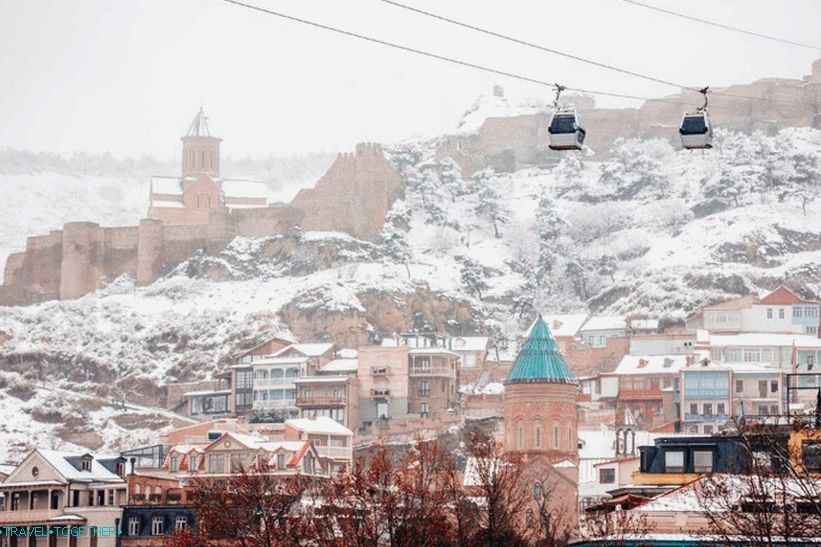 According to legend, Tbilisi was founded in the 5th century AD ancient Georgian king Vakhtang Gorgasali. Already in the 6th century, the city became the capital of the state. Interestingly, the settlement is in place modern Tbilisi was marked on the Roman maps. AT historical center dating back to the 1st century of ours was discovered era, as well as the remnants of the ancient settlements of 3-4 centuries BC. The name Tbilisi (formerly Tiflis) translates as “warm”, according to cause of many thermal sources.

Georgian legend tells about the territory Tbilisi was covered by forests in which the ruler hunted ancient Georgian state Vakhtang I Gorgasal. He shot a bird that fell into a hot spring and cooked. According to another the version was a deer who ran to the source and was healed. The king considered this a “good” sign and laid the city here.

In the 6th century, the capital of the Georgian kingdom was moved from Mtskheta to Tbilisi. In 626, the city after a months-long siege was taken Khazars In 653, Georgia was subjugated by the Arabs, although Tbilisi retained some independence for almost a century. In 736 years The city was captured by Arab troops. Arabs ruled Georgia until 11 century. In 1122 Tbilisi became the capital of a united and independent Georgia 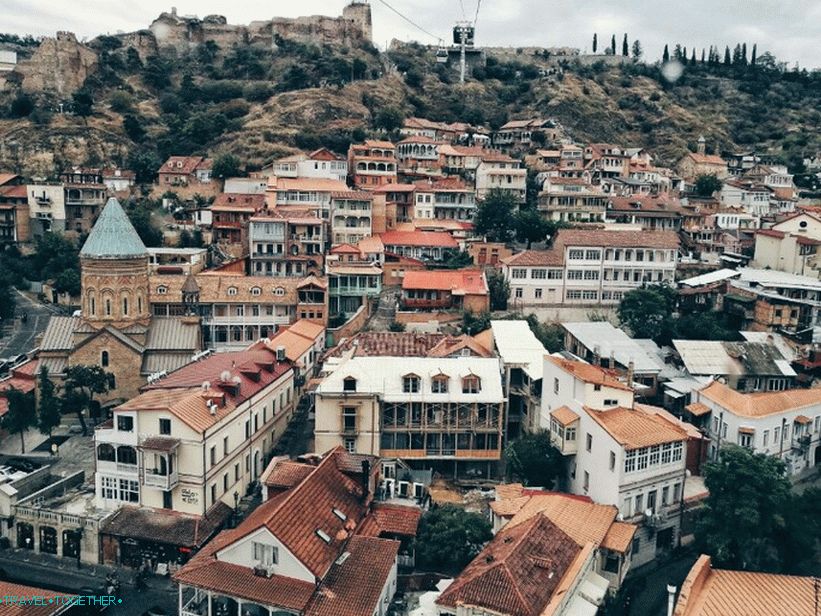 The heyday of the Georgian kingdom lasted until the 13th century. In 1226 Tbilisi was ravaged by Jalal-ad-Din troops, captured in 1238 the Mongols who ruled Georgia until 1327. In 1366 before Tbilisi has reached a great plague. From the 14th to the 17th century, the city experienced several ruin and destruction:

In 1490 (after the collapse of the Georgian state) Tbilisi became the capital of the Kartlian kingdom. In 1578 the city was occupied by the Turks. AT 1783 Georgia accepts protectorate of the Russian Empire. Tbilisi remains the main city of the country. In 1918, it was announced independence of Georgia. Independent Georgian State did not last long and already in the 30s of the 20th century the country became part of the Soviet Union. Georgia became independent in 1991 after the collapse of the USSR.

Tbilisi has an international airport – the largest in Georgia. The capital of the country is connected by air with Moscow, Riga, Rome, Vienna, Minsk, Tallinn, Kiev, Amsterdam and other cities of Russia, Near and far zaruzubezhya. There are trains from the airport to the center. buses 37/137. Ticket price – 0.5 GEL. Taxi costs 20-30 lari. Railway communication Tbilisi has with Baku, Yerevan, Batumi, Kutaisi, Gori, Borjomi. Buses connect the city with most cities of Georgia, as well as cities of Russia, Turkey, Armenia and Azerbaijan.

Public transport Tbilisi – metro, buses and minibuses. A trip by subway and by bus costs 0.5 GEL. Minibuses a bit expensive. 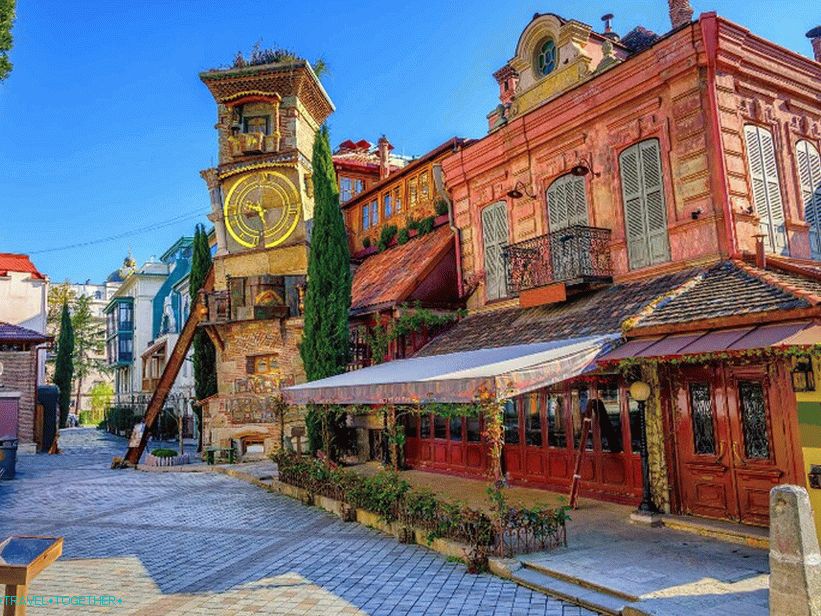 Avoid shopping and dining at Kote Street Abkhazi. This is a popular tourist area, where prices are often strongly overestimated. Large flea market is located near the square Freedom and is held every Saturday. This is the best place to buy. antiques and various interesting things. The main market is located near the Dynamo Arena. Basically, in Tbilisi they buy: antiques, jewelry, local products (chacha, churchkhela, wine, cheese, mineral water). Shops with these goods located throughout the historic center. 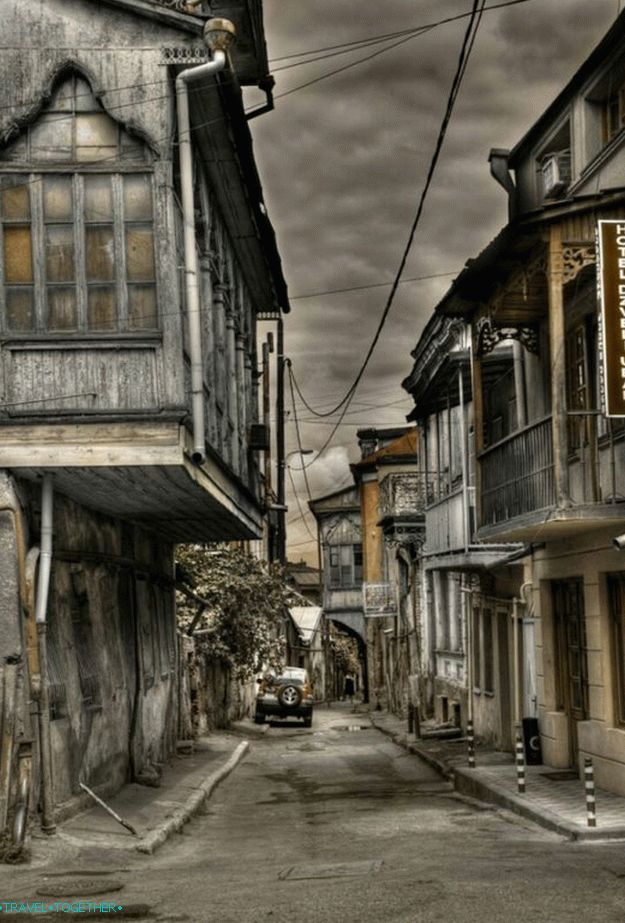 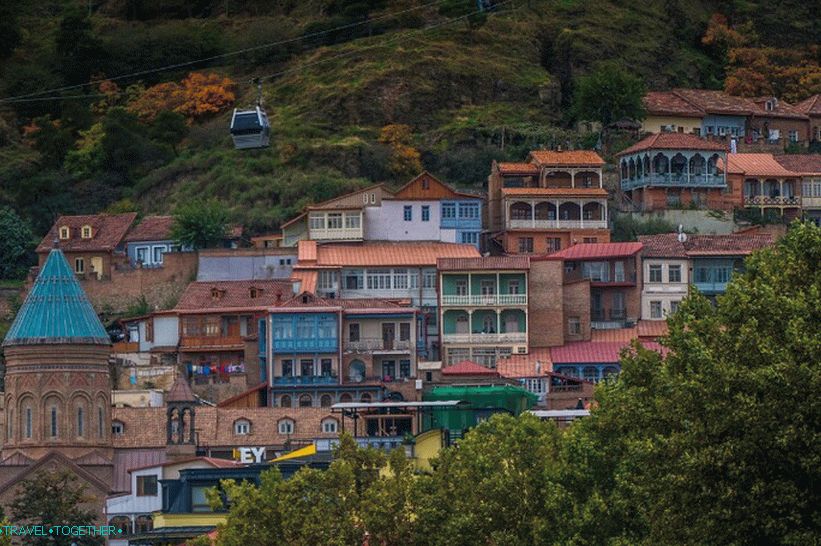 The old city is the heart of Tbilisi. This area is located between Freedom Square, the ancient ruins of the fortress Narikala and Kura. Despite the fact that Tbilisi throughout its history once ruined, the historic center has been remarkably well preserved and retained a special atmosphere and charm. 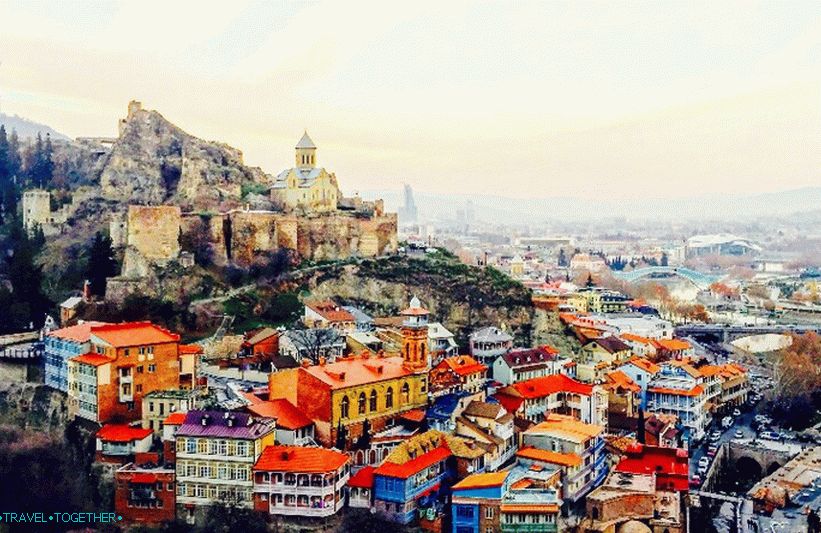 Old Tbilisi is a district of narrow streets on which ancient churches, old houses with pretty wooden balconies and quiet courtyards. This old architecture is a bit like architecture of the Renaissance and Italy. In the old town you can also see a number of eclectic sights and modern architectural elements. The historical center of Tbilisi is full of hidden treasures and places of interest that can be discovered with a simple walk. 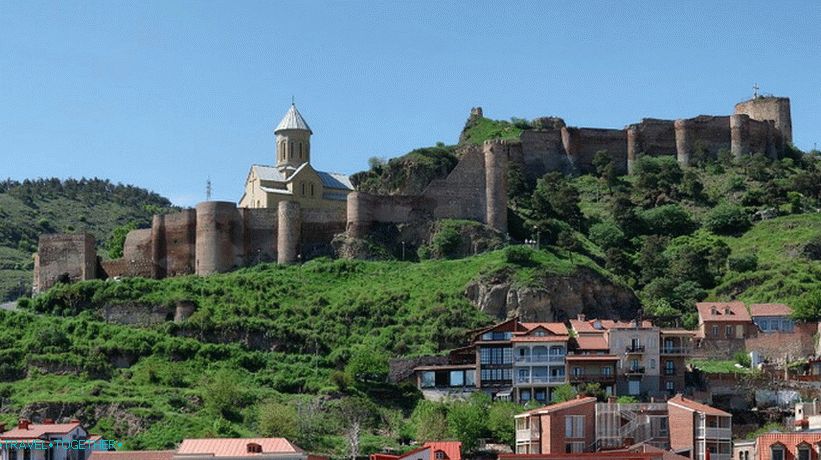 Narikala – one of the symbols of Tbilisi, the ancient Persian fortress built in the 4th century and expanded in the 8th century by the Arabs. The fortress is located on a high hill and consists of two parts. AT the lower part in the 90s of the 20th century built the church of St. Nikolay, which is located in the same place where the ancient 13th century church. Most of the fortress was destroyed when earthquake in 1827. The main thing why tourists come here – stunning views of the old town and the valley of the Kura. Climb on The fortress can be on the funicular, which goes nearby temple Metekhi.

Temple Metekhi or Assumption of the Blessed Virgin Mary – one of the main sights of Tbilisi. This ancient church of the 12th century, located on a cliff above the Kur. Nearby is an equestrian statue the legendary Georgian ruler Vakhtang Gorgasali. First temple This place was built in the 5th century. Presumably here there was also a royal palace. Therefore this place is one of the oldest in Tbilisi. The old church was destroyed by the Mongols. The existing temple dates from the late 13th century. The building was damaged by fire in the late 18th century during the Persian invasion. The territory of the temple was used as a prison in the 19th century, and the temple itself nearly demolished in Soviet times under Stalin. 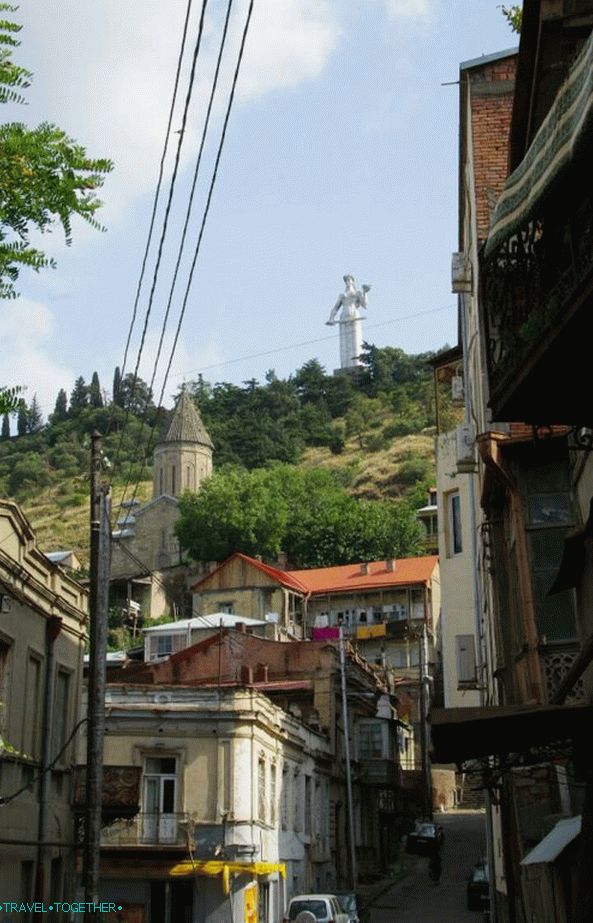 Mother – Georgia or Kartlis Deda – 20-meter aluminum statue near the Narikala fortress. It is not only a symbol of Tbilisi, but the whole country. The sword in her hand is for the enemies, and the wine cup is for friends 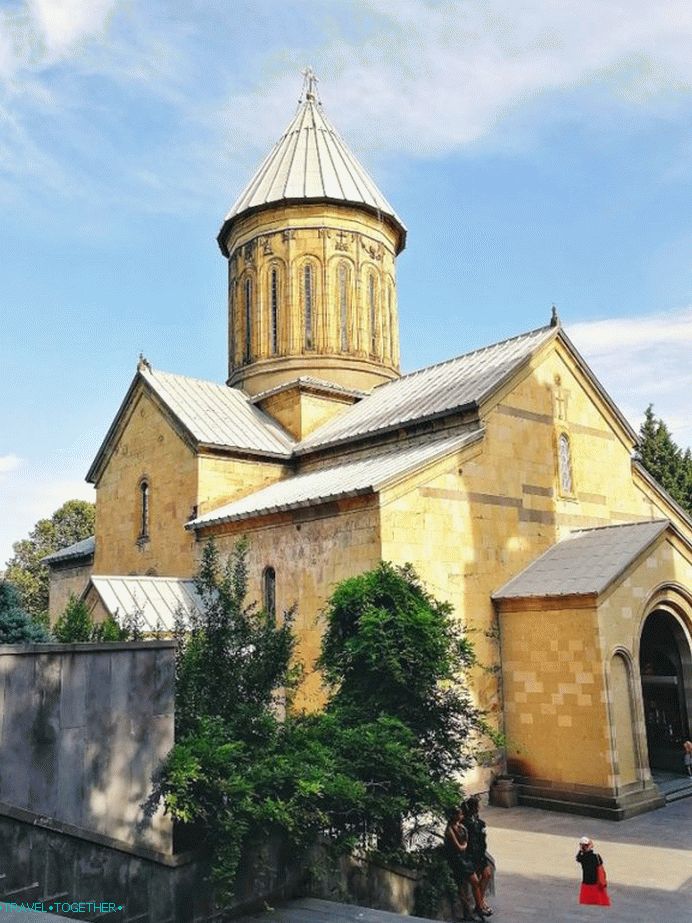 Sioni – the former cathedral church of Tbilisi, which until 2004 (before the construction of Sameba) was the main religious building the capital of Georgia. The first church on this site was built at the end 6th century. The temple was rebuilt several times, destroyed by the Arabs and an earthquake in 1668. Arabs damaged ancient frescoes and iconostasis. The current structure is mostly dated first half of the 19th century. 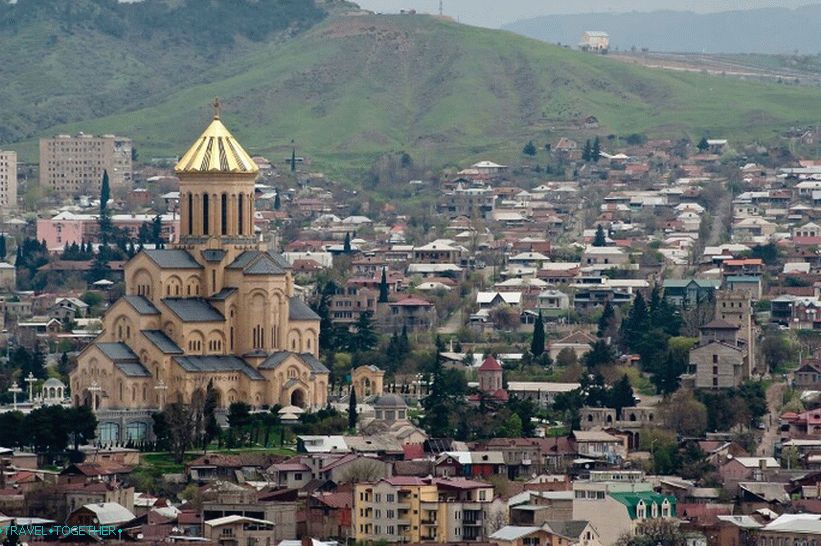 The Church of the Holy Trinity or Sameba – a grand cathedral Cathedral, completed in 2004. It is the largest religious 84 meter tall Tbilisi building with a beautiful gilded the dome.

Kashveti – a church of the early 20th century on Rustaveli Avenue. 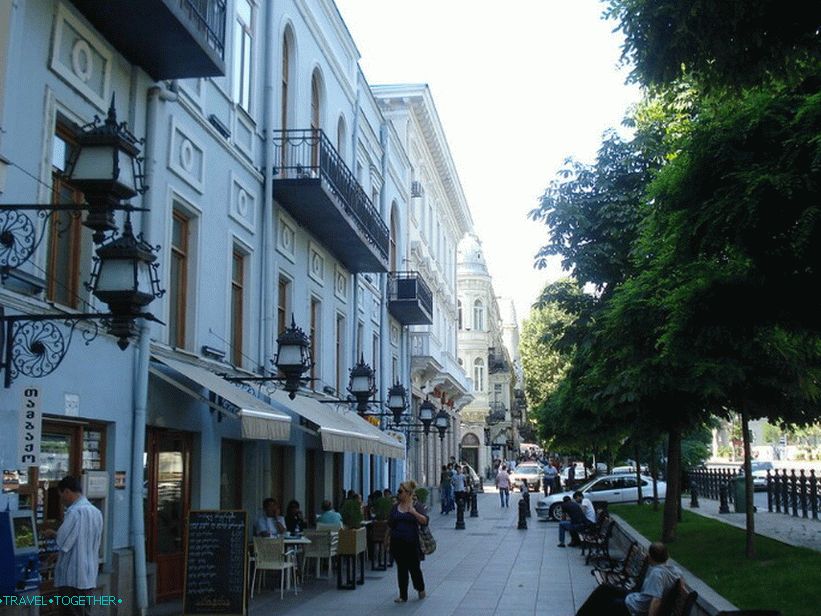 Rustaveli Avenue is the central street of Tbilisi, named in honor of the national Georgian poet. Starts from the square Freedom. 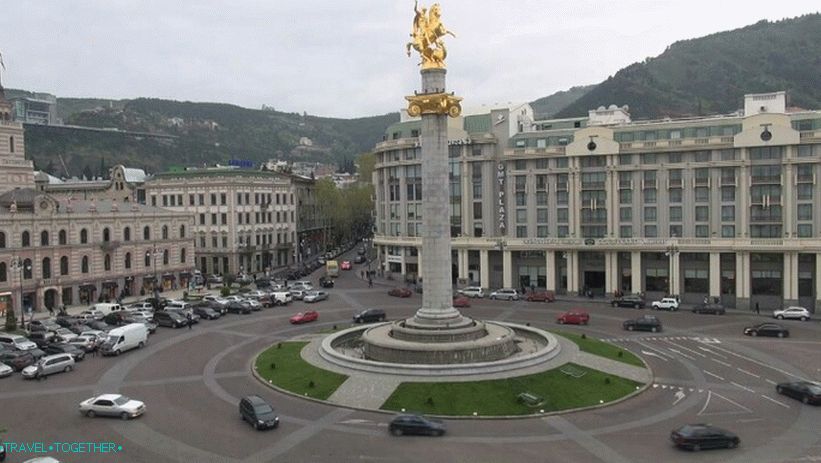 Freedom Square is one of the central squares of Tbilisi, located in the old town. Mostly surrounded monumental architecture of the 19th century. The center is set high statue of sv. George 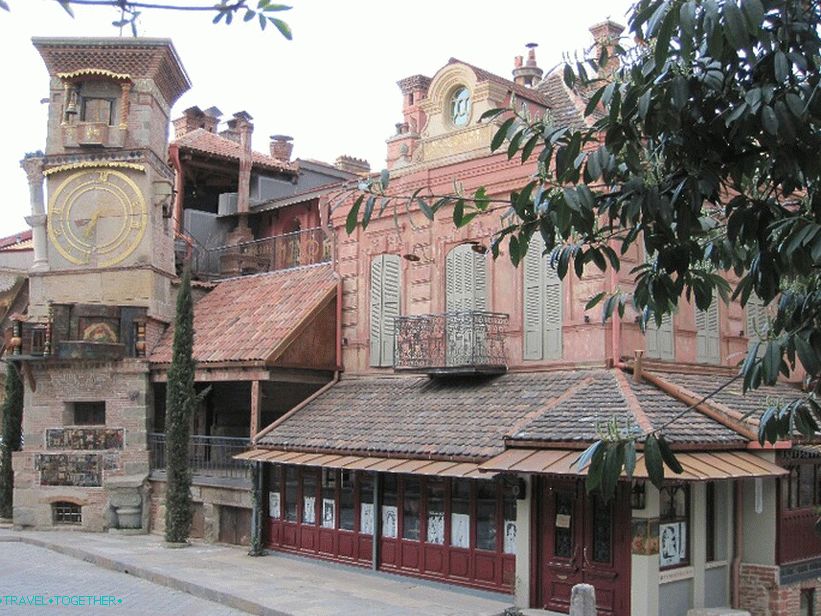 Gabriadze Theater – a puppet theater located in the heart Tbilisi. It is one of the most beautiful buildings in the city with fabulous clock tower. On the facade of the tower are hundreds of hand tiles created by Gabriadze himself. Every hour from the door upstairs the angel comes out and strikes the bell with a hammer, and at noon and 19.00 you can see a small puppet show under called “Circle of Life”. 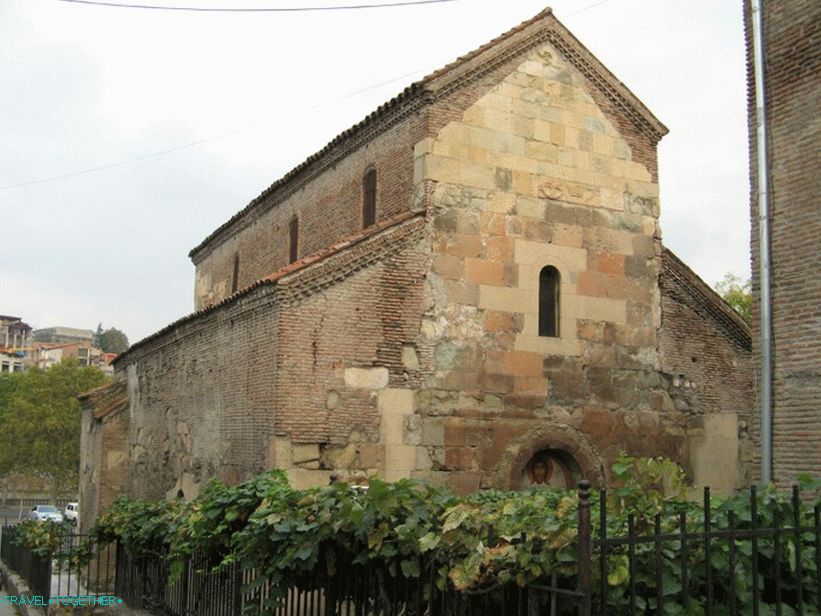 Anchiskhati – the oldest church in Tbilisi, built in the 6th century Tsar Dachi Ujarmeli. The building was destroyed and rebuilt by several time. The brick bell tower was built in the 17th century. Building built of tufa and is a three-nave basilica with horseshoe-shaped apses.

The Peace Bridge is one of the first modern architectural attractions of Tbilisi, glass-steel structure by project of the Italian architect De Luchi. Is pedestrian bridge over the Kuru.

Abanotubani is one of the most charming areas of Tbilisi, known for its natural sulfur baths sources. In this area you can find a lot of budget hotels. take a walk along the old canal and admire the fortress Narikala

Tbilisi on the map of Georgia