Sweden – the most detailed information about the country with a photo. Sights, cities of Sweden, climate, geography, population and culture.

Sweden is the largest state in Northern Europe, located on the Scandinavian Peninsula. Washed by the Baltic Sea and It borders with other Scandinavian countries – Norway and Finland Sweden is a constitutional monarchy, a member of the European Union and party to the Schengen Agreement. Is one of richest countries in the world with stunning nature and rich history.

Sweden is a country of endless forests and majestic lakes, numerous islands along the Baltic coast and cozy cities. This is a state with a distinctive history from the legendary Vikings to one of the strongest powers of Europe. Until the 17th century Sweden was a strong kingdom, and the size of the state was 3 times more current. All the more surprising that the country is not directly participated in military conflicts since 1815 (like Switzerland) and until still eschews any military alliances. Swedes were pagans before 11th century. Now most people in Sweden are protestants 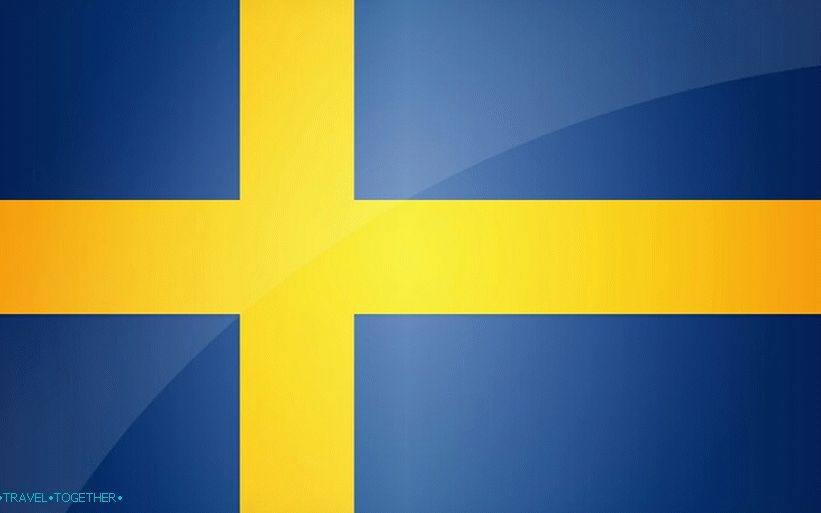 Sweden occupies the eastern and southern part of Scandinavian Peninsula and washed by the Baltic Sea. Largest islands Swedish Baltic are Gotland and Öland. Country relief mostly hilly. In the north along the border with Norway stretch the Scandinavian mountains. Here is the highest point Sweden – Kebnekaise mountain (2126 m). The southern part of the country – flat 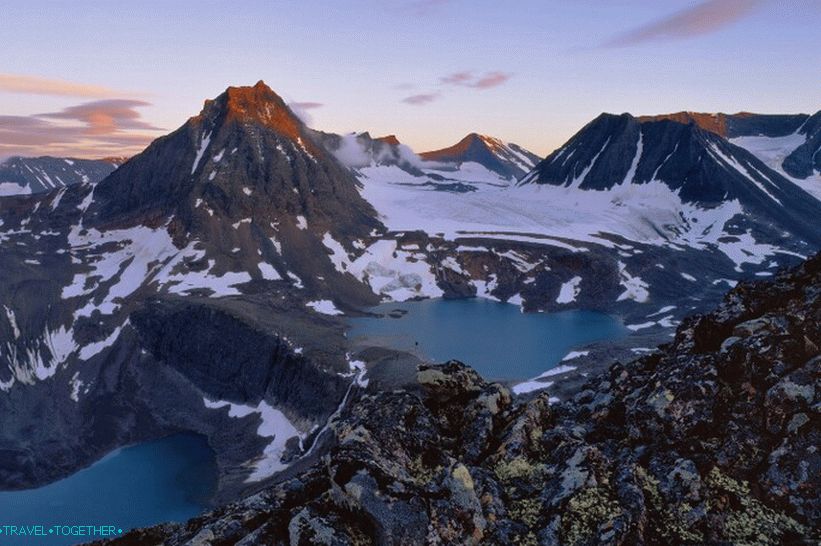 Due to geographical features and large enough Sweden has quite a variety of natural landscapes. In the north – it is tundra and taiga forests, to the south – mixed, in the extreme south – broadleaf. Forests occupy more 60% of the country. Sweden has a rather rich fauna: elk, Roes, foxes, hares, wolves, bears, boars, lynxes, wolverines. 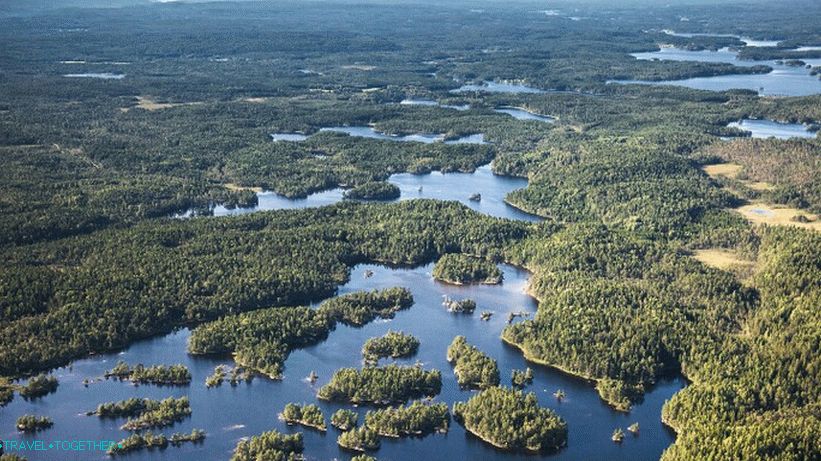 The territory of Sweden is rich in lakes. The largest of them are Vänern and Vettern. Most rivers flow into the Baltic Sea. Largest rivers – Kalixelven, Skellefteelven, Umeelven and Tourneelven. In the sea cod, mackerel, herring live in lakes and rivers – salmon, trout, perch, grayling.

Most of Sweden’s climate is temperate due to the influence of the warm Gulf Stream and relief. The summer is warm enough Winter is cool with slight frosts. In the south, the average temperature winters around 0 ° C. In the north of the country the climate is colder – subarctic, with cold winters and cool summers. 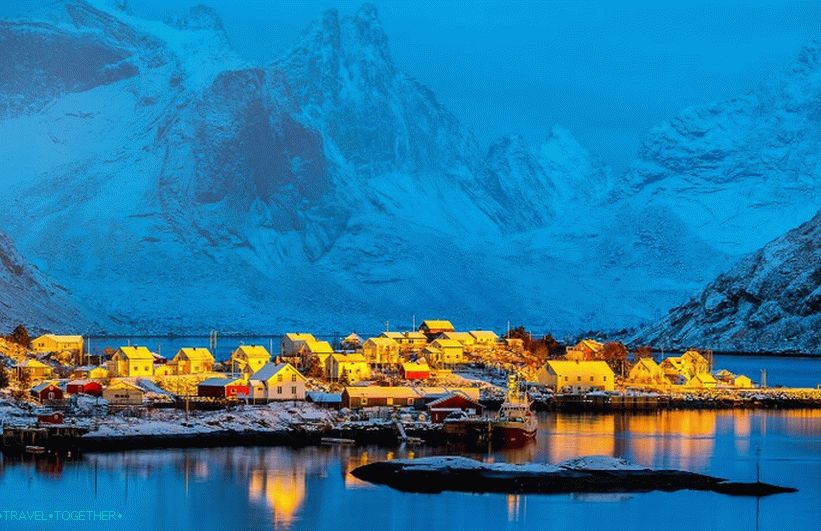 The best time to visit Sweden will be from May to September. In the off season can be cool and rainy. Highly beautiful in Sweden in the winter, especially during the Christmas period.

In the third millennium BC swedish territory was settled Germans. In the early Middle Ages, the tribes dominated the göts and sveev. This period in the history of Sweden is called Wendelsky. Tribes were divided into small principalities governed by the king. By the 8th century Sweden was united by the Upsala king Ingyald Insidious. Begins the Viking Age. The Vikings are becoming a powerful force. They are engaged in navigation, trade, fight a lot. The Vikings were pagans and had a great influence on the whole of northern Europe. Their the era ended when the “court of the gods” was burned in Uppsala and on the territory of Sweden began to penetrate Christianity.

In the 11th century, the supreme power passes between the families of the King Stenkila, Sverker and Eric. In 1250 to replace the elective power comes the Folkung dynasty. During this period there is a strengthening nobility. The last period of medieval Sweden is called the era of Kalmar Union. According to this document, the king was elected together representatives of childbirth. But in fact this process was rendered great influence Danes. During this period, against the backdrop of the struggle with the Danish national self-consciousness is born, and Sweden itself is more united.

Stockholm – the capital of Sweden

In 1523, Gustav Vasa was proclaimed king of Sweden. With him was torn apart by the Kalmar Union, the monarchy is becoming hereditary, the rise of the peasantry and flourishing chivalry After Vasa’s death, several coups followed until Charles IX came to power. Under his rule in Sweden the Reformation won, and the country itself took the road of conquest. K 17 Sweden becomes an empire and acquires the lands of Poland Norway, Germany. According to the results of the Northern War with Russia, the country lost many lands, lost the status of the empire and became secondary power.

In the 18th century and early 19th century, Sweden tried to regain its status one of the most powerful powers in Europe, but defeated by Russia in 1743, put a cross on the Swedish ambitions. The era is coming Riksdag rule, which is called the “era of freedom.” During this period in Sweden is developing science and culture. As a result of napoleonic wars Denmark ceded Norway to the Swedish state. Was imprisoned Swedish-Norwegian Union, which operated until 1905 of the year. 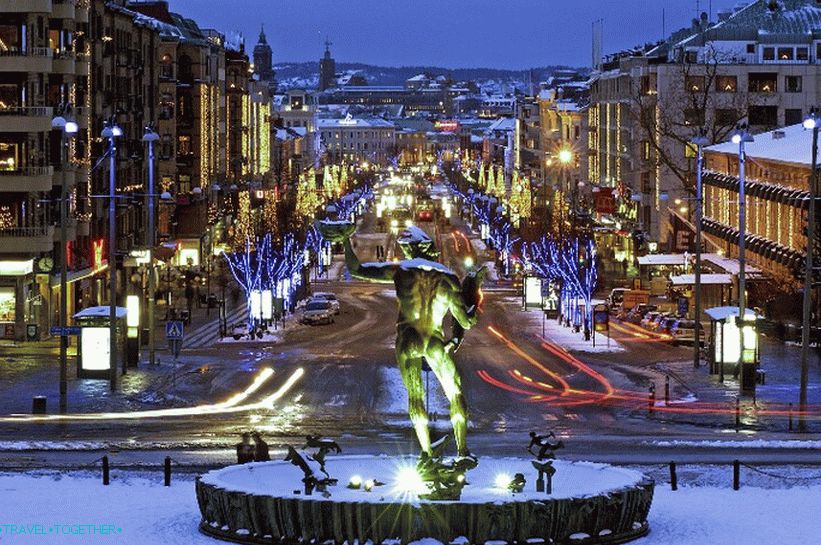 In 1809, a new constitution was adopted in Sweden, which laid the foundations of a parliamentary monarchy. In the 19th century begins industrialization that promoted economic growth and population size. During the Second World War (despite declared neutrality) Sweden has collaborated with the fascist Germany.

Sweden is divided into 21 flax, which, in turn, are divided on the commune. Len governed by the governor and the regional thought.

In regional terms, Sweden can be divided into the following regions:

Most of the Swedish population is ethnic Swedes. They speak in Swedish and are Protestants. Moreover, 90% of the population one way or another speaks English. Large diasporas: Finns, Sami. Sweden is a country with high urbanization. 85% lives in cities population. Despite the friendliness and calm, the Swedes are pretty closed and detached. Although this does not mean that they are indifferent and not will come to the rescue. 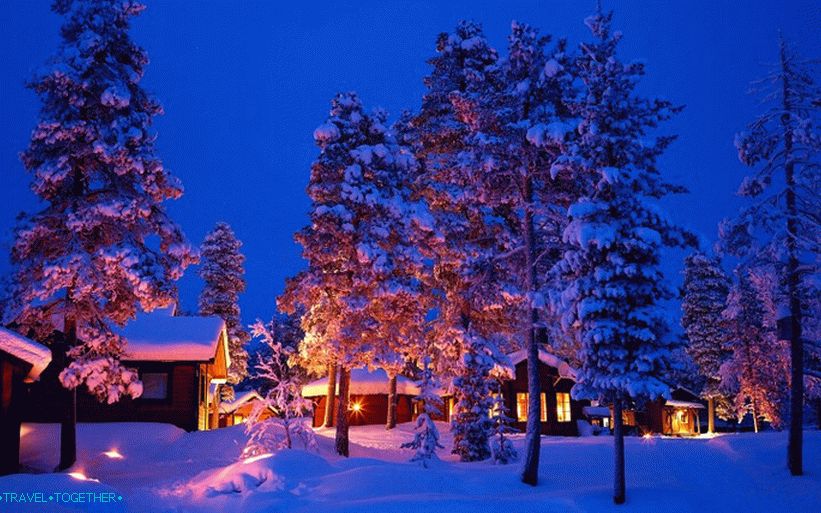 Sweden’s largest airports are located in Stockholm, Gothenburg. and Malmo. By train to this Scandinavian country can be reached from Norway, Finland, Denmark and Germany. Ferry service available from Poland, the Baltic countries, Germany, Russia and Belgium

Cities of Sweden and popular destinations

Stockholm is the capital and largest city of Sweden with charming the old town of Gamla Stan. Stockholm is located on the archipelago of 14 islands connected by dozens of bridges. It is a beautiful city with diverse architecture, interesting sights, rich cultural and nightlife. 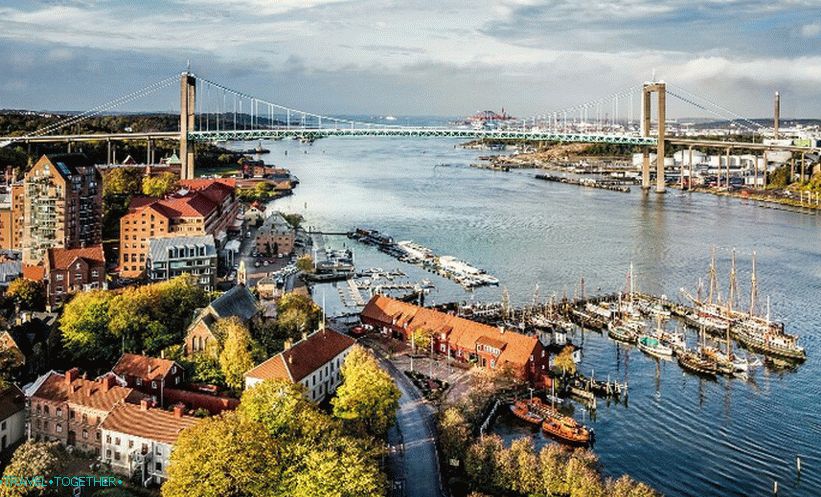 Gothenburg is the second largest city in Sweden, a large industrial center and port. It was founded in 1621 in the period the heyday of the Swedish Empire and for a long time was a stronghold of the Swedish fleet. Gothenburg is known for its cosmopolitan atmosphere and The country’s largest university. 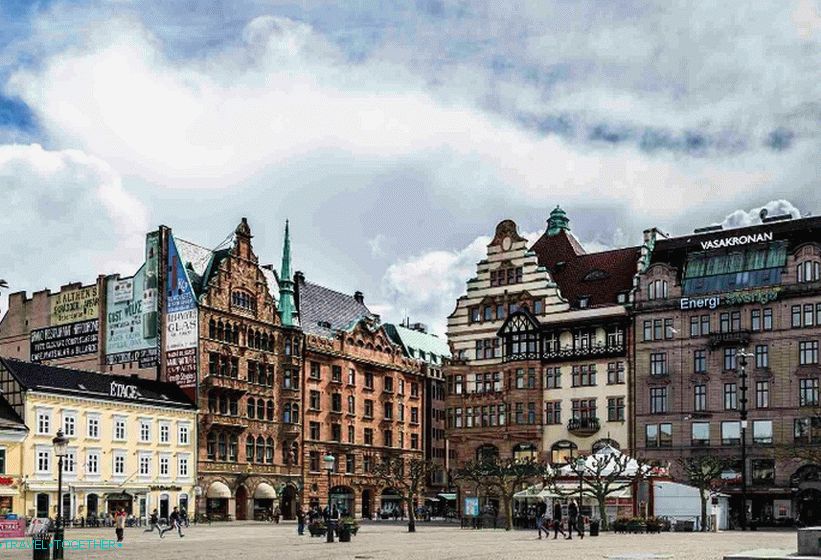 Malmo – the third largest city in Sweden, located in the south country. This is an old trading city with a Hanseatic past, industrial center and port. 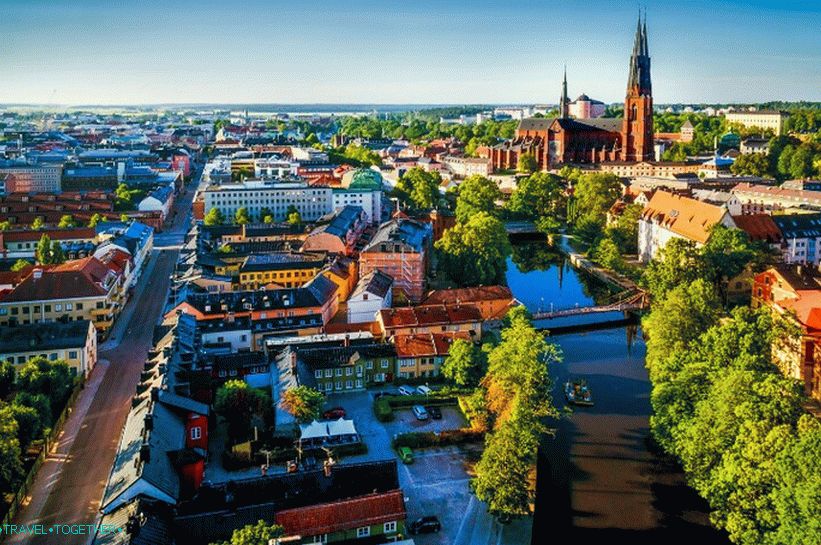 Uppsala is one of the most important historical cities in Sweden located 80 km north of Stockholm. Known for a large cathedral in Scandinavia and two large universities. 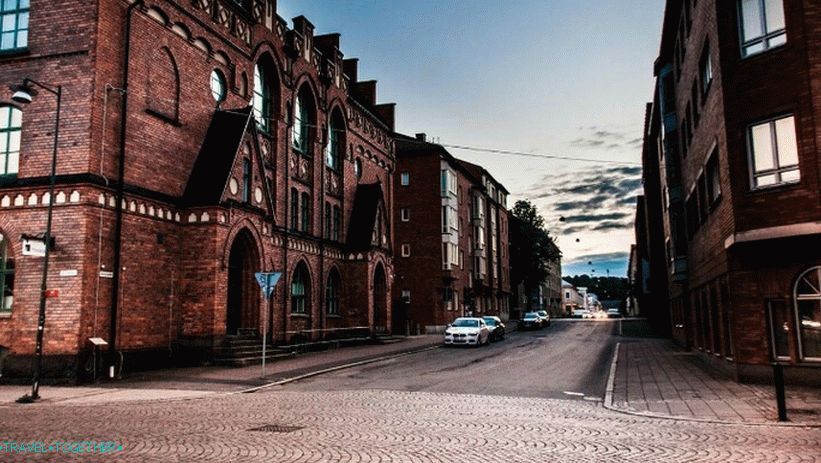 Jönköping is one of the most beautiful cities in Sweden, located in the southern part of Lake Vättern. 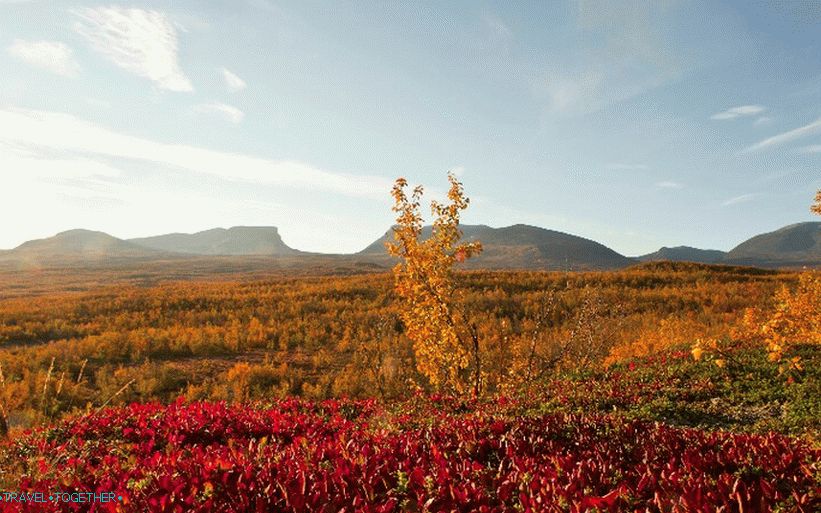 Abisko is a national park located above the Arctic Circle with stunning northern nature. 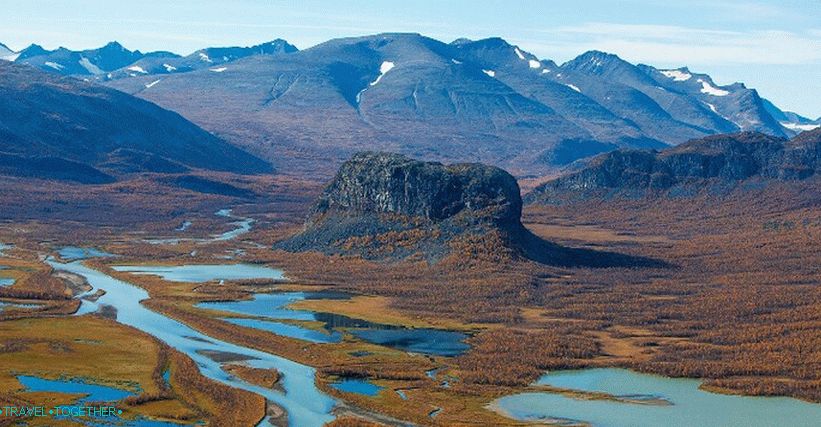 Sarek – one of the oldest national parks in Europe, located in Northern Lapland. There are more than 200 mountain peaks and more than 100 glaciers. 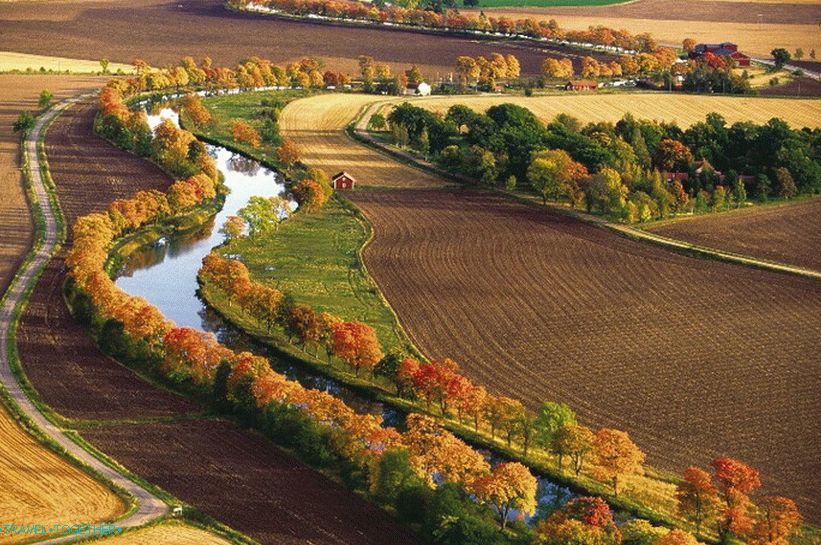 Goetha Channel – one of the largest and most famous engineering structures of Sweden. This is a 190 km long shipping channel connecting Stockholm and Gothenburg, as well as the lakes of Vänern and Vättern with Baltic Sea. 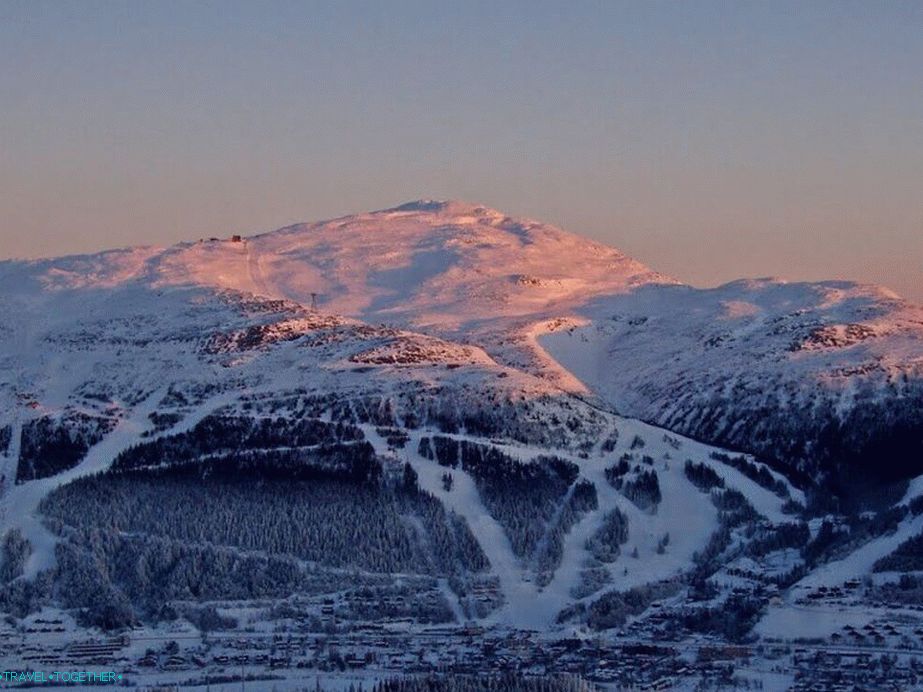 Åre is one of the best ski resorts in Europe, located in the Jämtland region. It has more than 100 slopes for skiing and 40 lifts. 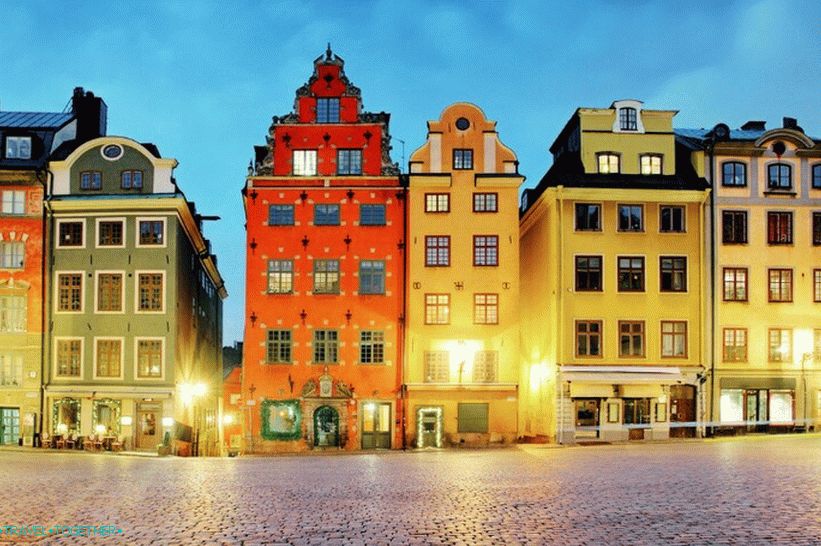 Gamla Stan – the historical core of Stockholm, located on Stadsholmen Island. This is the oldest part of the city, where the capital of Sweden began to grow in the middle of the 13th century. Gamla Stan – this is a charming scandinavian medieval architecture, narrow cobbled streets, several ancient churches and Stortorget square, surrounded by beautiful merchant houses. 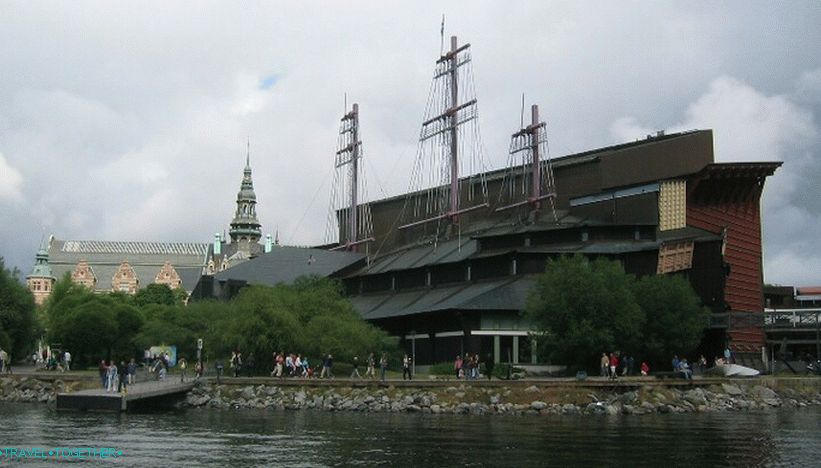 Vasa Museum – the most popular museum in Sweden, opened in 1990 and located in Stockholm. His most famous exhibit is a real warship and the pride of Swedish Imperial Navy – Vasa. 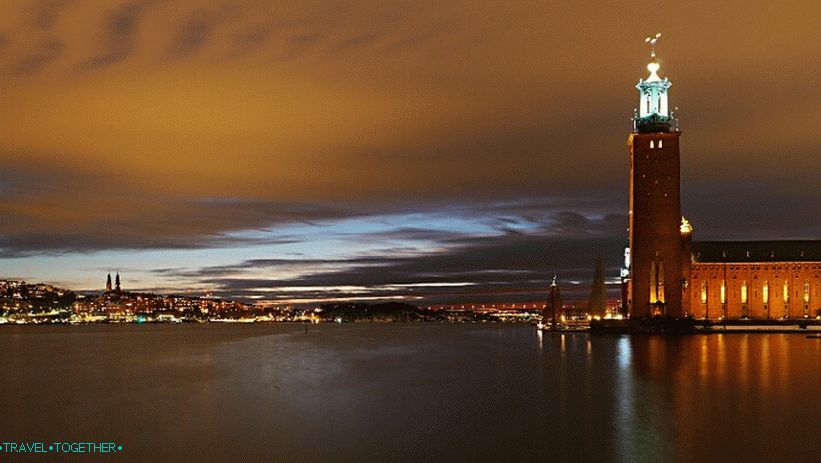 Stockholm City Hall – one of the most famous buildings in Sweden. The town hall was built at the beginning of the 20th century of 8 million bricks. Tower 106 meters high is crowned with three crowns. Within the walls of this building Every year the Nobel Prize is awarded.

Drottningholm – the official residence of the Swedish Royal family. This is a beautiful 17th century palace with a picturesque park that included in the UNESCO World Heritage List. Located in 11 km from Stockholm. 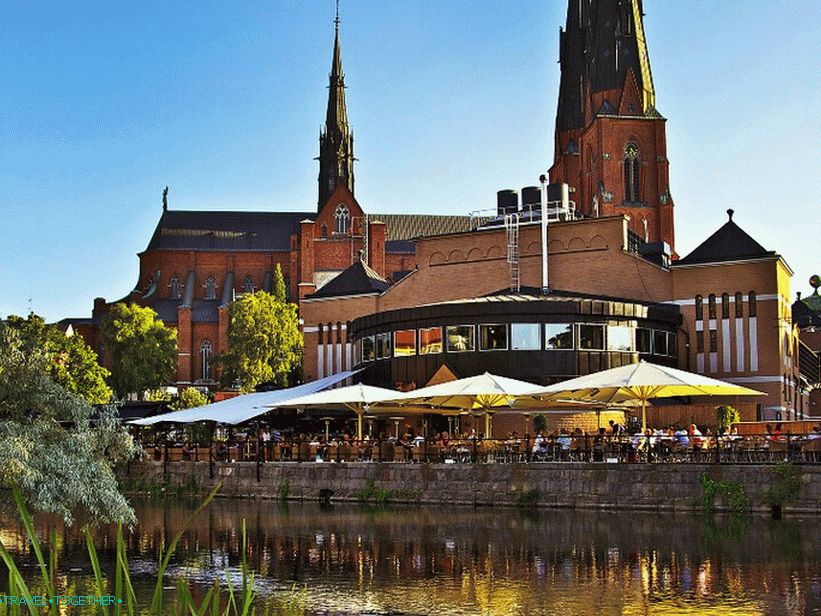 Uppsala Cathedral is the largest church in Scandinavia and one of the highest religious buildings in Northern Europe (118.7 meters). It is a beautiful gothic brick building with two towers. Construction of the cathedral continued from 1287 to 1435 years 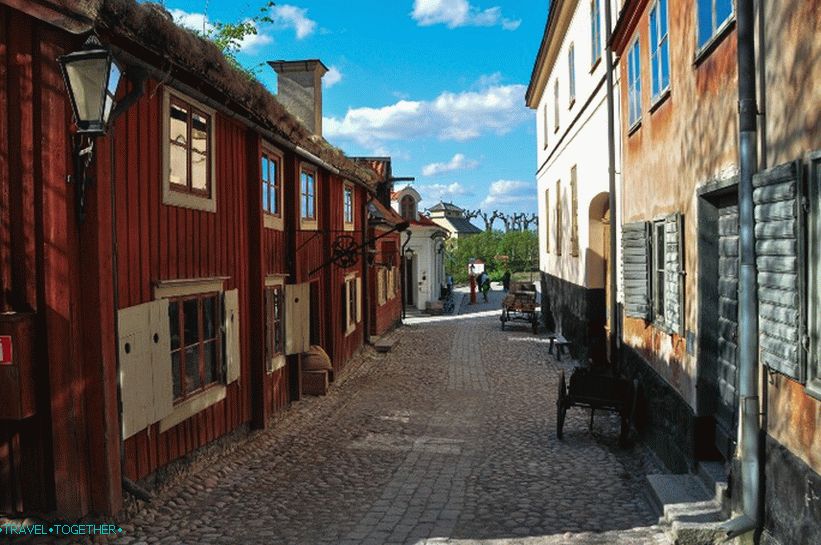 Skansen is the oldest open-air museum in the world. This is big ethnographic complex, which introduces the Swedish rural and urban culture of the 18th – 20th century. Here you can see traditional churches, schools, manors, shops, mills, home workers, craft workshops, bakeries. Museum workers in traditional the costumes demonstrate the work and life of old Sweden. 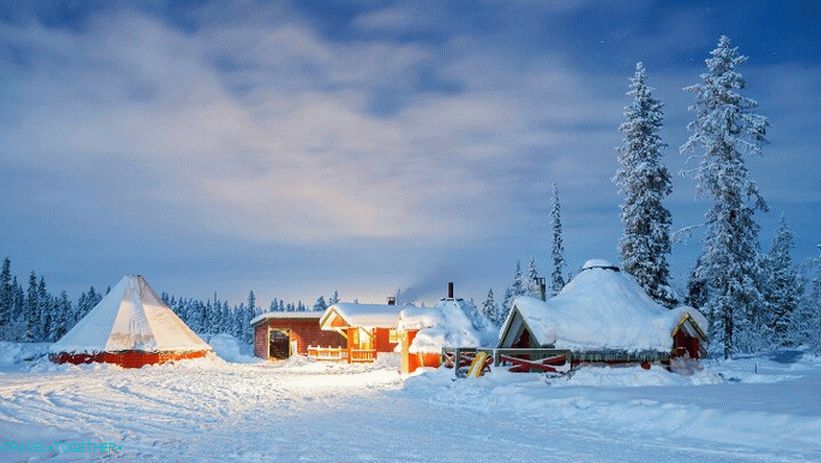 Kiruna is the northernmost city of Sweden, located in the Swedish Lapland 17 km away is the famous ice hotel. which is built every winter from the ice of the river Torne. 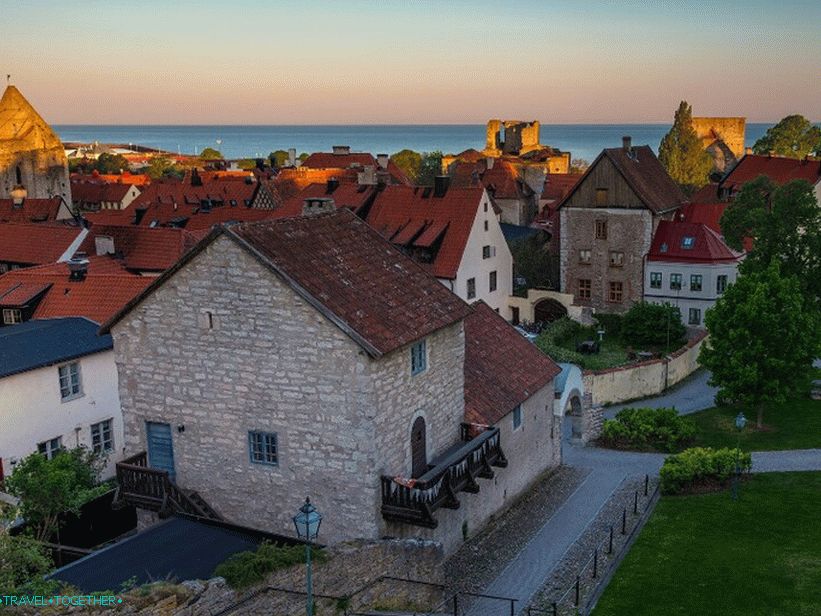 Visby – a medieval town fortress on the island of Gotland, filled with ruined churches, medieval trading houses and surrounded by walls with dozens of towers, which preserved scars of past wars. This is one of the most interesting. Sights of Sweden and World Heritage Site UNESCO. 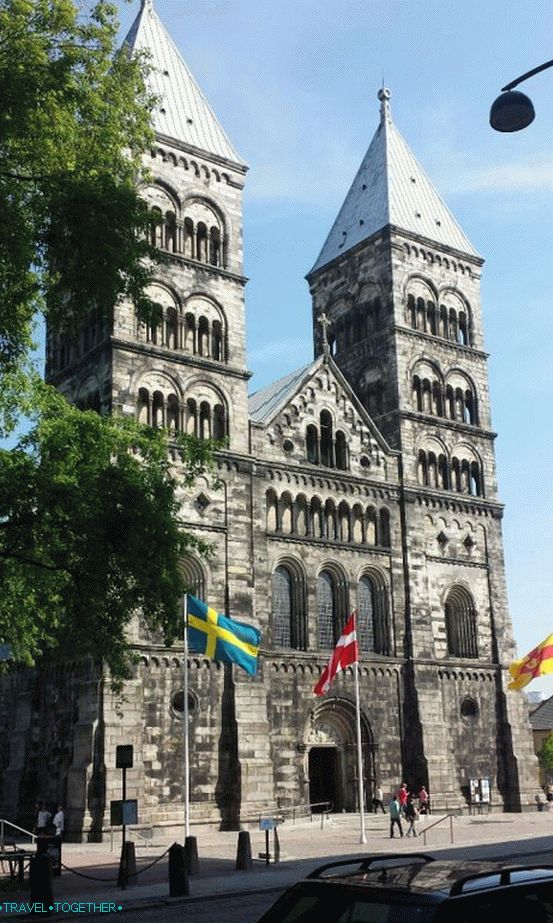 Lund Cathedral – the oldest and most beautiful Romanesque church in Sweden, located in the province of Skåne. The current building dates back to the 12th century and is known for its magnificent towers, astronomical clock of the 14th century with figures of Three Kings carved stone columns. 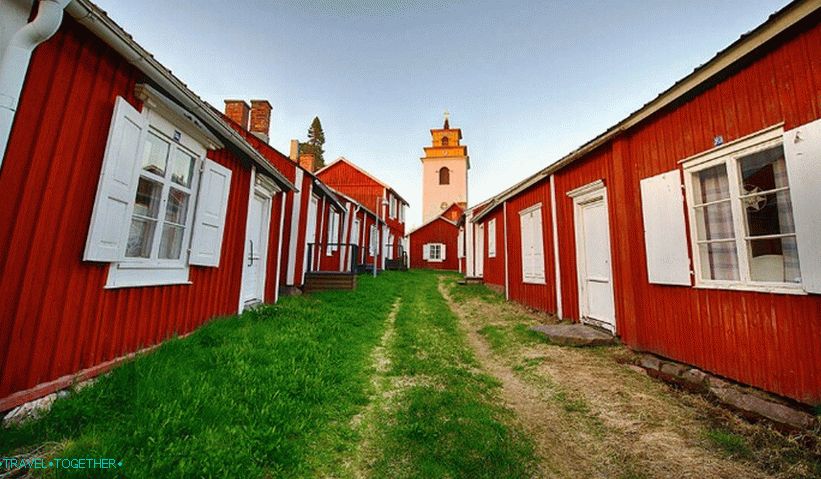 Gammelstad is an old church town of the 15th century, located in Lena Norrbotten in Swedish Lapland and listed UNESCO World Heritage Site. Its main feature is an old stone church that is surrounded by hundreds of traditional wooden houses. 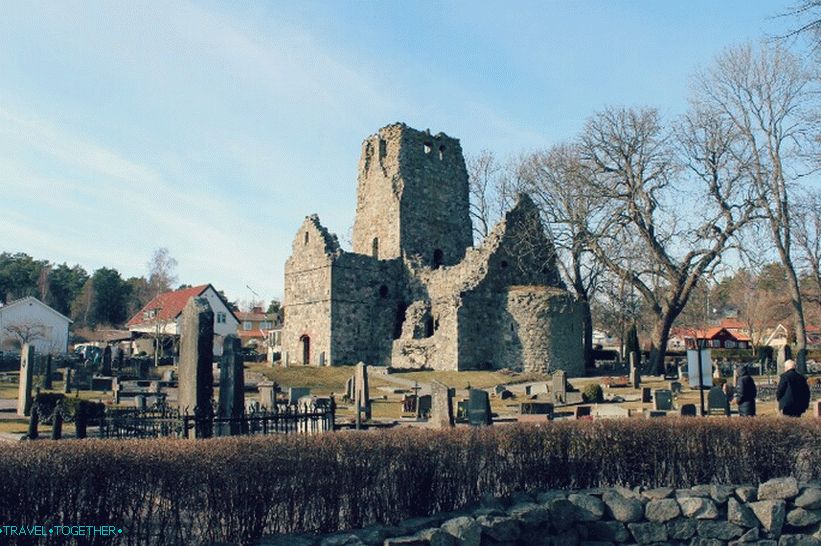 Sigtuna is a small charming village that was founded by the vikings. Here you can see medieval churches, ruins Viking buildings and their cult objects (runic stones). 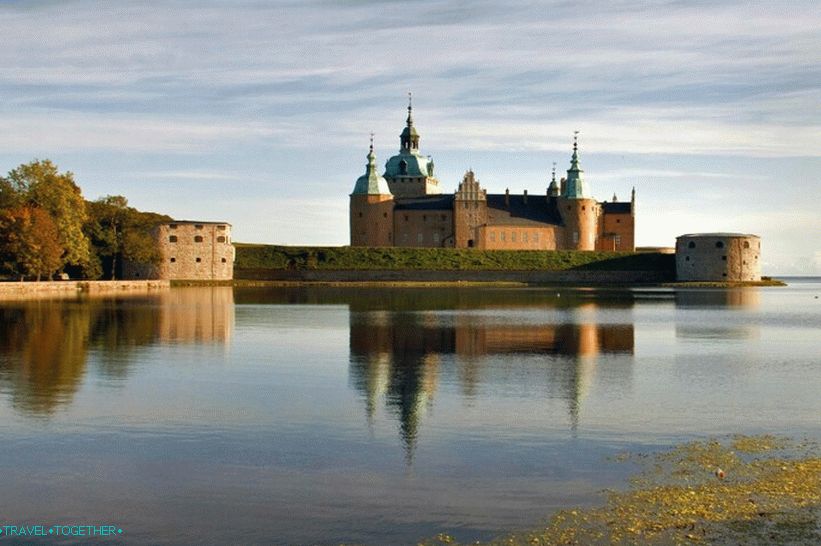 Kalmar Castle – one of the oldest castles in Sweden, built in 12th century. In addition, it is perfectly preserved to this day.

Sweden is one of the most expensive countries for living. Number in A hotel can easily cost 1000 SEK. In order to economize You can stay in a camping or cottage. Popular Network hostels – Svenska Turistföreningen. 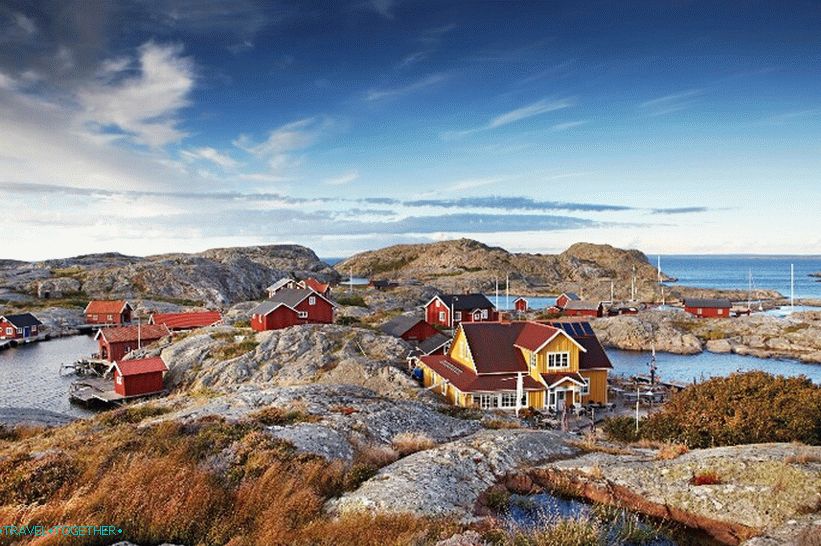 Swedish cuisine is rich in fish and meat. As a side dish most often the potato stands. One of the most famous and weird dishes Swedish (and Scandinavian) cuisine is surströmming (fermented herring). Other popular foods:

Cheaply you can eat at pizzerias, Asian restaurants and Ikea.

Sweden on the map