Strasbourg (France) – detailed information about the city from a photo. The main attractions of Strasbourg with a description, guides and maps.

Strasbourg is a city in Eastern France, the capital of Alsace and Prefecture of the Lower Rhine Department. Is the perfect stop between France and Germany, combining in an amazing way medieval past and modern present. Strasbourg is incredible gothic cathedral, narrow streets and half-timbered houses Grand Ile, channels and amazing cuisine. In addition, the city is the parliamentary capital of Europe (here sits the European parliament) and one of the largest university centers France.

Strasbourg is one of the most beautiful cities in the east of France, which It looks as if descended from the pages of fairy tales or fantasy. Its true gem is the old city – Grand Ile. Interestingly, the historical center of Strasbourg was one of the first (among all other European cities) is included in the list of objects UNESCO World Heritage Site.

Strasbourg is located in the east of France on the banks of the river Il (west bank of the Rhine) near the border with Germany, between Vosges and Black Forest. The city lies on the plains of Alsace and occupies favorable central position in Western Europe. Wherein historically and geographically strasbourg is closer to germany that imposes on him some German imprint.

The climate is temperate continental with warm summer and quite in the cool winter. Despite the fact that the average winter temperature in generally positive, often frosts and snowfalls are possible. Thanks the location between the two mountain ranges of Strasbourg is little affected strong winds. 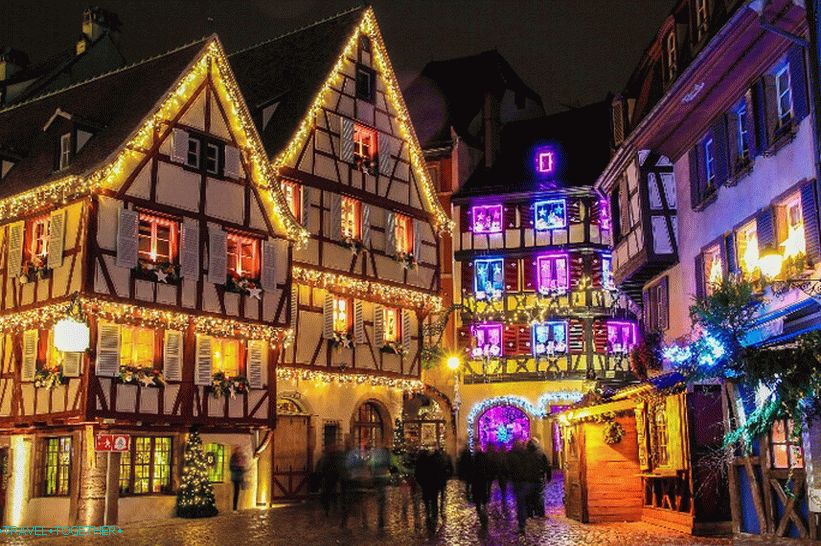 Strasbourg can be visited all year round. But the best time Visiting is the warm season and the pre-Christmas period. Название “Strasbourg” можно перевести как “крепость (замок) уroads “. Already in the 3rd century BC, this place existed Celtic settlement. In Roman times, there was one of its border cities – Argentorat.

After the collapse of the Roman Empire, the city was occupied by the Germanic tribe Alemanni, which, in turn, were absorbed francs. The name Strasbourg originated in the early Middle Ages. After the collapse of the kingdom of francs Alsace became part of the Holy Roman empire. Strasbourg remained part of Germany until the 17th century, even after receiving free imperial status in the 13th century cities. In 1349 in Strasbourg, some of the bloodiest the events of the Middle Ages, when more than a thousand Jews were publicly burned in his squares. Persecution of the Jewish population here lasted until the 18th century. Strasbourg was one of the first German Protestant cities who adopted the Lutheran faith at the beginning XVI century. Because of this, he became one of the European centers humanities training and typography. The first newspaper in Europe It was printed in Strasbourg.

In 1681, Louis XIV took advantage of the chaos of Thirty Years war and annexed the capital of Alsace to France. Status of Strasbourg as a free city ended after the French Revolution. After the Franco-German war of 1870, the Germans again annexed city ​​and applied the policy of Germanization, leading to the expulsion of those who prefers to be French. After the defeat of Germany in World War I returned to the city of France. And now it was the turn of the French to try to eradicate the traces of Germanization. During the Second World War, the Nazis considered Alsatians compatriots. Therefore, many of them were forced to fight in the German army. Today, Strasbourg is among the ten largest cities in France, is one of the center of french education and european politicians.

Strasbourg has its own international airport. But there is one nuance – the number of directions is quite limited and they are all quite expensive. The best choice would be the airport of Basel. From airport Basel can be reached by bus to the train station Saint-Louis, then by train to Strasbourg. Some budget Low-cost airlines fly to Karlsruhe airport. Best way to get from there to Strasbourg – take bus 285 to the railway station Baden-Baden (3.40 euros, travel time about 25 minutes), more – by train.

Strasbourg has access to the motorways connecting it with west (A4), south (A35) and east (A5). Keep in mind that during France, most highways are paid. By Highways to Strasbourg can be quickly and easily reached from: Paris, Lyon, Basel, Frankfurt, Brussels, Stuttgart. Strasbourg has a high-speed rail link to Paris and some other cities: Lyon, Dijon, Metz, Marseilles, Bordeaux, Lille, Frankfurt, etc. Train Station located in the western part of the city.

On Wednesday and Saturday at the rue de Vieil-Hôpital flea works market. North of the city center is the Place Des Halles – shopping center with over 100 stores. In 2008 in Strasbourg a new mall has been opened – Rivetoile, located between the Etoile Polygone and Etoile tram stops Bourse. Designer clothes can be bought at Galeries Lafayettes, Rue Hellebardes and the square Gutenberg. Alsace is one of the most famous gastronomic regions of France. There is an abundance of fine, high-quality products. Foie gras and sauerkraut are two centers Alsatian cuisine. Popular baeckeoffe (braised pork or beef), tarte flambée (similar to pizza) and spaetzle (various pasta), which are a side dish to fish and poultry. For dessert in Alsace serves a variety of cakes and famous kugel shopf. Highly Local wines are popular and famous. Grand-Ile – the heart of Strasbourg, is a large island formed river ile. It is the perfect place to explore the city and its historical atmosphere. Grand Ile is actually a historical center. Strasbourg. Here are its main attractions: Strasbourg Cathedral (Notre Dame de Strasbourg), other medieval churches and historic buildings. The Strasbourg Cathedral (Notre-Dame-de-Strasbourg) is one of the most the grandiose gothic churches of Europe and a beautiful monument medieval architecture. The great Victor Hugo spoke about him – “the monster is gigantic and delicate.” The cathedral was built between 1176 and 1439 years and has a 142-meter tower (completed in 1439), the highest in France. To climb to the observation deck need to overcome 322 steps. 300 year olds are installed on the cathedral astronomical clock. Entrance to the Strasbourg Cathedral is free.

Every day at 12:30 the astronomical clock beats off a small representation from the era of the life of Christ and the parade of the apostles. Outside the facade is a giant picture of the Middle Ages: hundreds The sculptures stand out from the walls and underlines the play of light and shadow. BUT the pink sandstone of which Notre Dame is made changes color to depending on the time of day. Church of sv. Paul’s – a beautiful neo-gothic building of the end 19 century. This Protestant church is located on the edge of the island. Ile Saint Helene. Saint-Pierre-le-June – Protestant church, built in the style of Gothic on the site of the ancient chapel of the 11th century of the Merovingian period. This the former monastery church has kept some romance elements and frescoes of the 14th century. Gutenberg Square – a few steps from Notre Dame de Strasbourg. Named after the inventor of the typographic print Johan Gutenberg. On the square is set his monument. it the place was one of the centers of Strasbourg from the Middle Ages until the 18th century. Kleber – the main public square of Strasbourg. This place holding different events and fairs, the main Christmas tree of the city. Rohan’s Palace is a historic monument in Grand Ile, in which Now there are 3 museums: the archaeological museum fine and decorative arts. It was built between 1731 to 1742. Rogan’s Palace is considered a French masterpiece. baroque. House Kammertsela – one of the most beautiful houses in Strasbourg. This a typical alsatian half-timbered house with a beautiful carved facade was built in the 15th century and located in the historic center of the city. “Little France” – one of the most beautiful places Strasbourg, the historic district (island) with beautiful half-timbered houses near the water. Here in the Middle Ages lived artisans, fishermen and millers. It is a pedestrian area. Not far from Little France “covered bridges” are located (Les Ponts Couverts), which retained their name, despite that roofs they no longer have. Bridges were built to serve as a rampart for fortifications on waterways. They were used to connect the three medieval towers, remnants of the ancients ramparts and covered wooden galleries, which are now disappeared. Vauban Dam is a barrier dam designed by famous French marshal and military engineer Vauban. Dam was built to protect Strasbourg when, after evolution artillery and techniques of warfare the walls were no longer reliable protection. Dam allowed, closing its arches, quickly raise the level river ile. If you climb to the roof, you can admire the maze Strasbourg Canals and Little France. Broglie Square is more like a long alley. Here are located several beautiful mansions of the 18th century, as well as the town hall, the prefecture and the opera house.

Strasbourg on the map of France