Stralsund, Germany: the most detailed and comprehensive guide to the city, the main attractions of Stralsund with photos and description, location on the map.

Stralsund is a city in Germany on the Baltic coast in region of Mecklenburg-Western Pomerania. Located on the coast of the strait Strelasuund adjacent to the island of Rügen, which is connected to Rügen Bridge. Stralsund was once one of the main cities Hanseatic League on a par with Lübeck, Bremen and Hamburg. Here you find outstanding sights and brick masterpieces Gothic, old cobbled streets and beautiful medieval buildings, plunge into the atmosphere of the Middle Ages and the Hanse period. City preserved rich historical, architectural and cultural heritage that makes it one of the most interesting cities in Northern Germany. AT In 2002, the historical center of Stralsund and Wismar was incorporated into UNESCO World Heritage List. 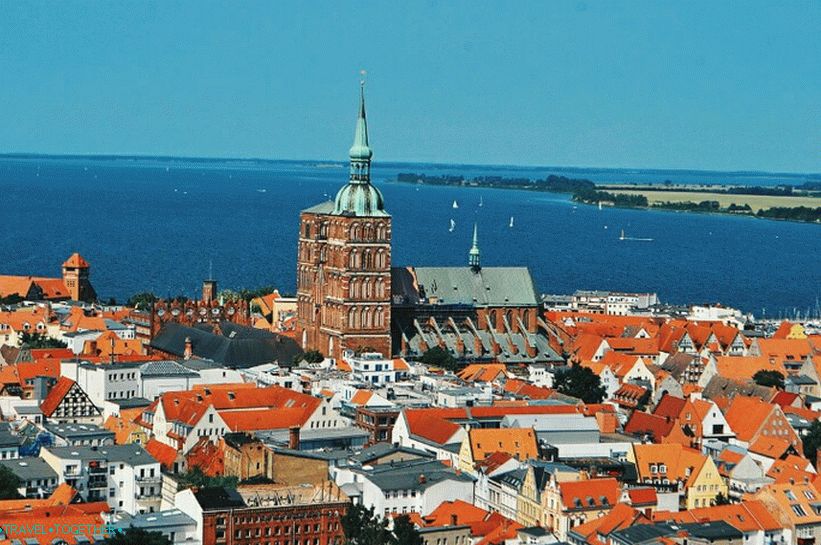 Stralsund was founded on the site of the old crossing to the island of Rügen in the 12th century came from Westphalia. Earlier this territory lived Slavic tribes. Already in 1234, Stralsund received urban right, and after 49 years he became a member of the Hanseatic League, quickly becoming one of its leading cities. In 1370 there was concluded the Stralsund Peace which marked the end confrontation Hanse and Denmark.

During the Thirty Years War, the city was besieged by Swedish troops, but never taken. Under the Treaty of Westphalia, he withdrew to Sweden Until the beginning of the 19th century, remained one of the main Swedish Fortresses on the Baltic coast.

In 1807, Stralsund was taken by Napoleon. In 1815 the city became part of Prussia. During World War II Stralsund was bombed, but then carefully restored.

Stralsund is located in a temperate zone. On the climate and the weather is significantly affected by the proximity of the Baltic Sea. Winter is here soft enough with slight frosts, summer is warm and humid. Behind the year falls 600 mm of precipitation.

Stralsund is one of the gastronomic centers of the region. In the town You can find a lot of institutions of different categories with both traditional North German cuisine, and with European. Definitely worth it visit authentic restaurants in the old town, where you can try the seafood, traditional dishes, drink German beer and enjoy the wonderful atmosphere.

The nearest major international airports are located in Berlin. (270 km) and Hamburg (280 km). Daily trains link Stralsund with Berlin, Hamburg, Rostock, Karlsruhe. Quickly and convenient to get to the city by car on the Baltic highway.

All the main sights of Stralsund are located in the limits of the old city. In Altstadt you will find many masterpieces brick gothic and medieval architecture: mighty churches, impressive town hall and old houses, will pass through the cobbled narrow Streets with a wonderful medieval atmosphere. 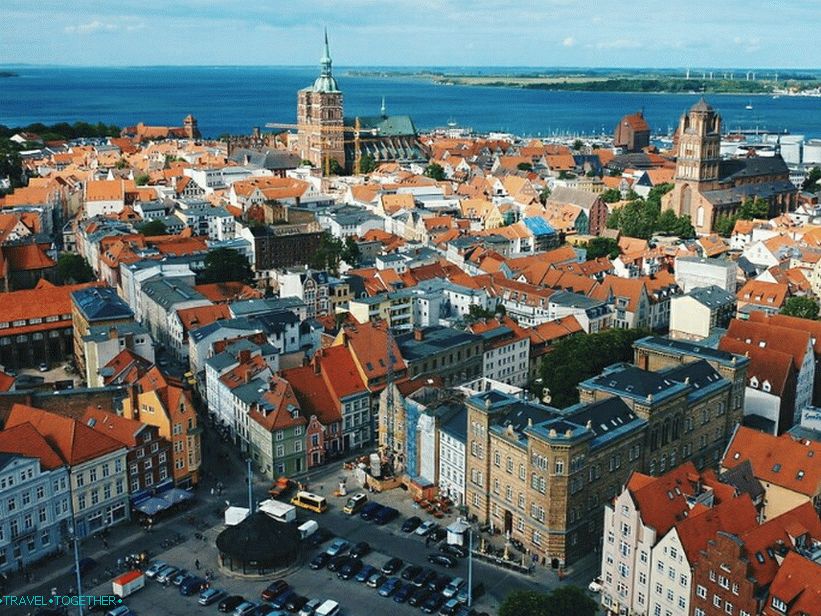 Church of sv. Nicholas – the oldest of the three main churches Stralsund. Located on the Old Market Square and considered one of the most beautiful religious buildings in northern Germany. Construction began in 1276. It was originally a simple church with a tower, but with the transformation of the city into a major center maritime trade in the 14th century the church was significantly rebuilt, transformed into a large basilica with a high 87-meter tower. AT After the 17th century, after a strong fire, the tower received a baroque dome. Now its height is 103 meters. Inside the church can be found valuable art treasures from different eras. Installed on the tower astronomical clock of the 14th century.

Church of sv. Jacob – the last of the three main churches Stralsund, mentioned since the beginning of the 14th century. This is a beautiful gothic Basilica with a 68-meter tower. The tower of the cathedral was originally gothic Rebuilt in Baroque style in the 17th century after the strike lightning 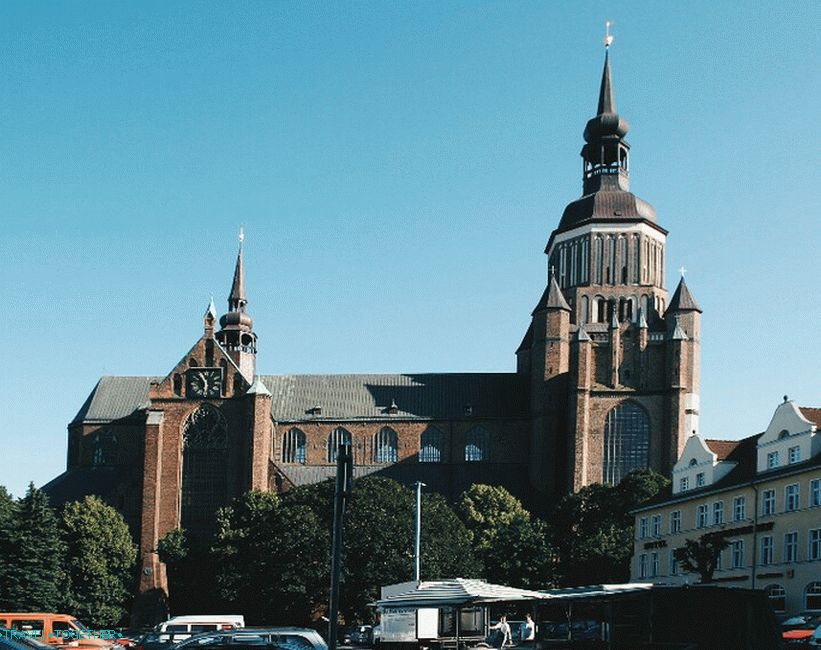 Church of sv. Mary is the largest church of Stralsund, built at the end of the 13th century. The original church was destroyed in late 14th century as a result of the fall of the tower. Its modern look acquired as a result of perestroika in the 14-15 centuries. Church of sv. Mary’s It has a unique layout and architecture – it consists of two side halls and high central tower. Until the middle of the 17th century Gothic dome tower had a height of 151 meters. At that time, the church was one of the tallest buildings in Europe. After lightning strike In the early 18th century, the dome of the tower was restored in baroque form. To climb the tower of the church of sv. Mary needs to overcome 366 steps, but the great view of Stralsund is worth it. Currently church of sv. Mary is one of the largest religious buildings. among all the Hanseatic cities.

Other monuments of sacral architecture in Stralsund:

The old market is the heart of Stralsund. Old medieval the area in Altstadt, which exists almost since its foundation cities.

Town Hall – a symbol of Stralsund, one of the most beautiful buildings of this type on the Baltic coast, symbolizing wealth and the power of the hanseatic period. The origins of construction go back to 13 century. And the city hall itself, in addition to Gothic, combines renaissance styles and baroque. 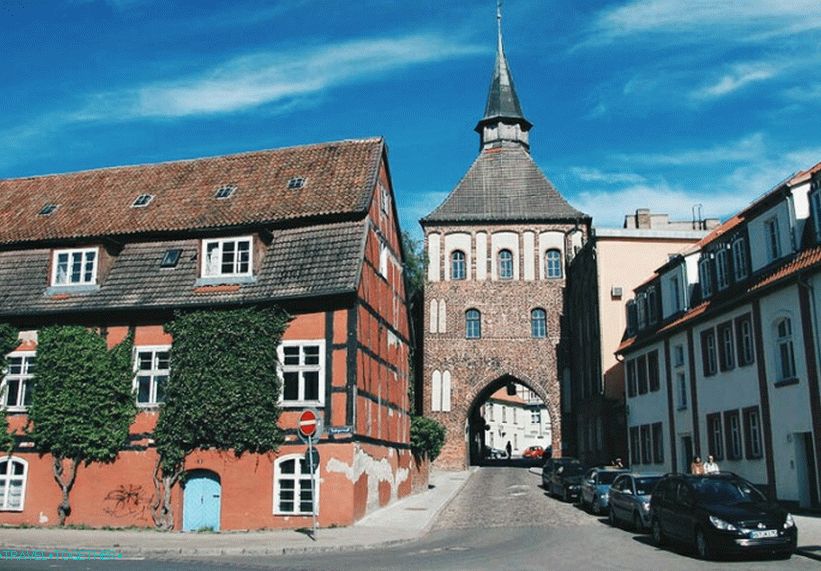 Compared to other cities of the Hanse in Stralsund still significant portions of the old city walls with towers and loopholes. One of the restored old city gates are the gates of Kütertor.

Also in Stralsund you can discover a large number beautiful medieval buildings that list does not make sense. Just walk around the old town and make your own little discoveries!

Detailed map of Stralsund with landmarks

Stralsund on the map of Germany