Stockholm (Sweden) – the most detailed information about the city with photos. The main attractions of Stockholm with a description, guidebooks and cards.

Stockholm – the capital of Sweden, its largest city and cultural Centre. Located in the southern part of the country on the islands between the lake Mälaren and the Baltic Sea. Stockholm is one of the most beautiful cities of Scandinavia, which is famous for its charming old center (Gamla Stan) with medieval houses, modern innovation architecture, many gorgeous museums and green parks. it one of the most comfortable cities in Europe with wonderful cosmopolitan atmosphere.

Stockholm is often called the “Venice of the North” and this is not surprising. The inner city is located on 14 islands connected by many bridges. Stockholm did not affect world wars and strong military conflicts, so the historic center has been preserved in excellent condition. The architecture of the old city is quite diverse and contains buildings of all ages from the 13th century. Interesting that 30% of the territory of Stockholm is occupied by waterways, another 30% – parks and other green pleasures.

Stockholm is located in the south-east of Sweden on the channels, connecting the Baltic Sea and Lake Mälaren. Climate – temperate sea, which is significantly affected by the warm Gulf Stream. Summer in Stockholm is cool with an average temperature of around 20 ° C. Winter characterized by slight frosts and frequent thaws. 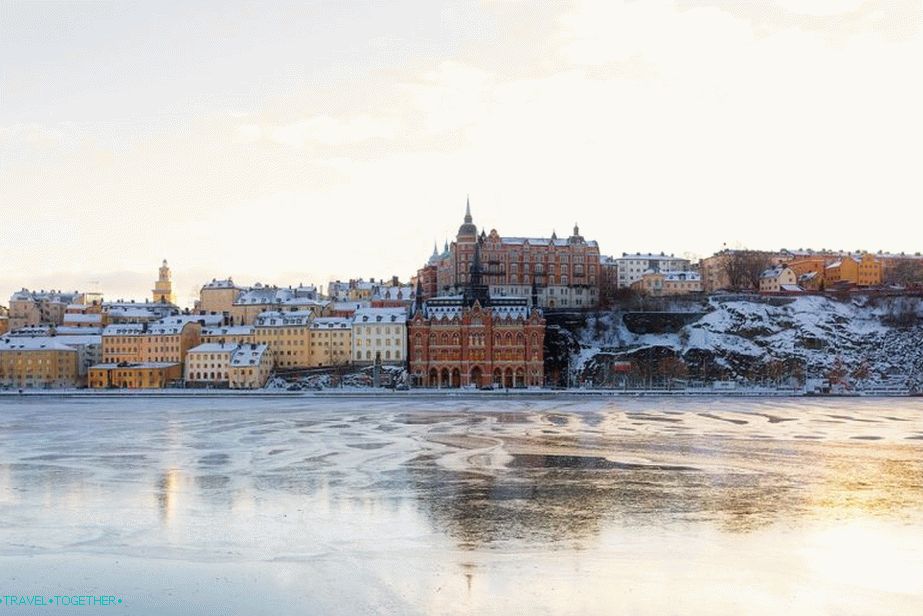 The inner city is divided into: 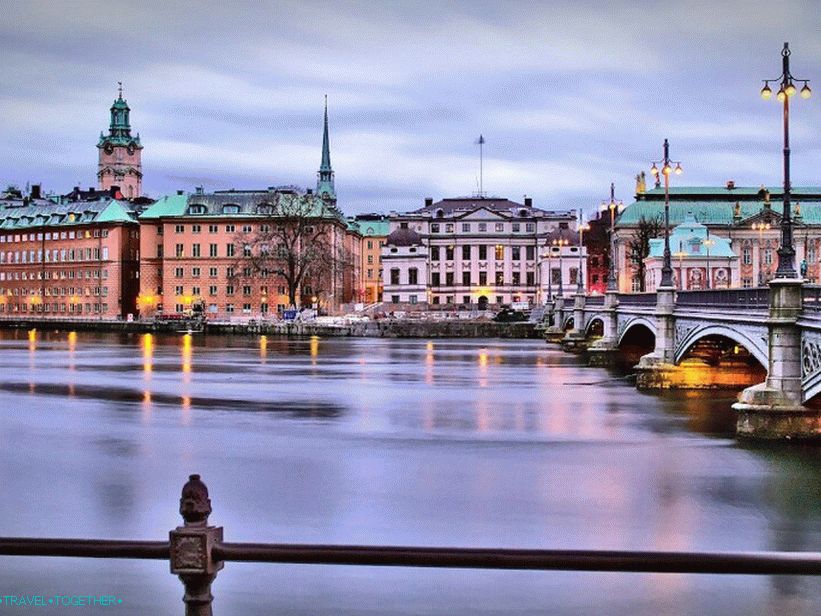 In the 12th century, the site of the future capital of Sweden was located small fishing village. In 1187 on the island Stadsholmen began to build the first fortifications and buildings of the new city. It is believed that Stockholm was founded by Jarl Birger in 1252. Due to its favorable strategic position, the city quickly gained important trade value. 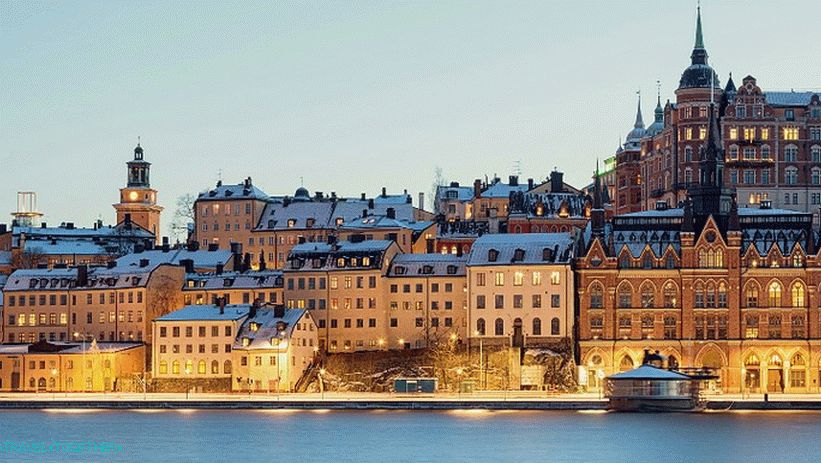 At the end of the 15th century in Stockholm, Sten Sture raised a rebellion against the power of the Danes. In 1520 all instigators of the uprising were executed. TO In the 17th century, Stockholm became one of the most important and largest cities of Sweden. In 1634 it became the capital of the Swedish kingdom

After the defeat in the Northern War, the value of Stockholm falls. A new round of growth and development of the capital of Sweden fell at the end of 19 century when the development of industry turned it into a major center trade. Now Stockholm is one of the most important cities. Scandinavia, the center of science and culture. 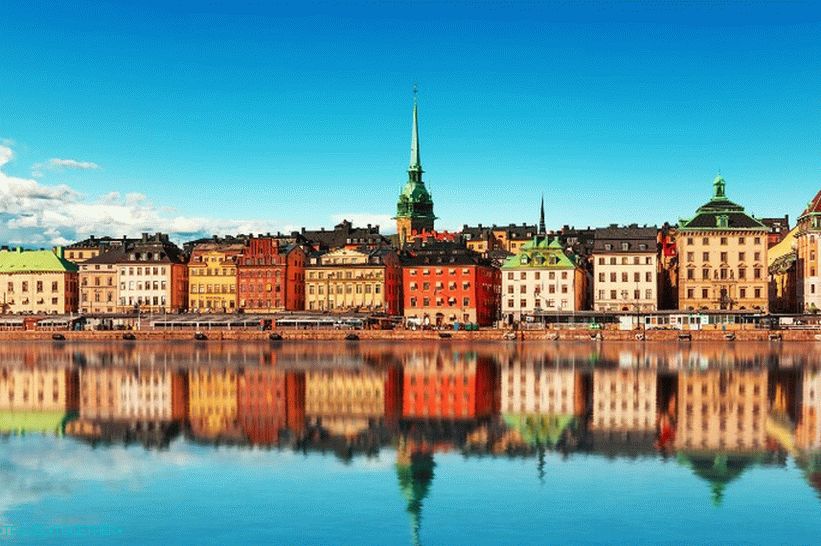 Gamla Stan – the old town, which is one of the largest and the best preserved medieval urban centers in Europe and one of the main attractions of Stockholm. it The city’s oldest place, founded in 1252. Gamla Stan is a maze of atmospheric cobbled streets and old North German architecture.

In the center of Gamla Stan is Stortorget Square, which is the oldest square of Stockholm and is surrounded by beautiful old houses of merchants. From here begins Köpmangatan Street – The oldest street of the capital of Sweden, mentioned back in the 14th century. But Stortorget also remembers the tragic events. In 1520 here heads of rebellion against the Danes were executed, who considered heroes of the Swedish people. 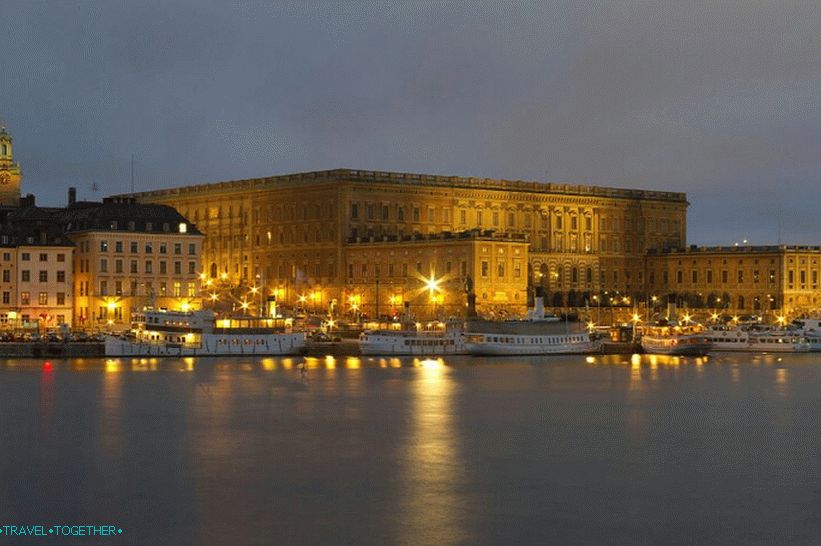 Royal Palace – one of the main attractions Gamla Stan and one of the largest palaces in Europe. Is an the official residence of the Swedish royal family (although used only for ceremonies) and contains over 600 rooms. The palace was built in the 18th century in the style of Italian Baroque burned down in 1697, the castle. 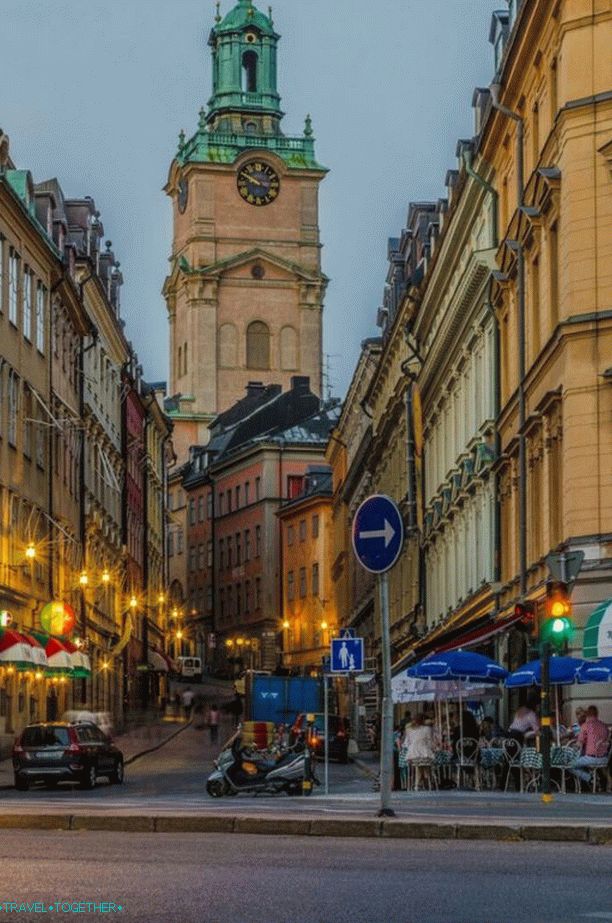 Church of sv. Nicholas is considered the oldest religious building in Gamla Stan and informally referred to as the Stockholm cathedral. The church was founded in the 13th century and is an important example. Scandinavian brick gothic. Also here is the residence Lutheran Bishop of Stockholm. The church is located near royal palace that’s why throughout history here important state events took place: coronations, royal weddings and funerals. 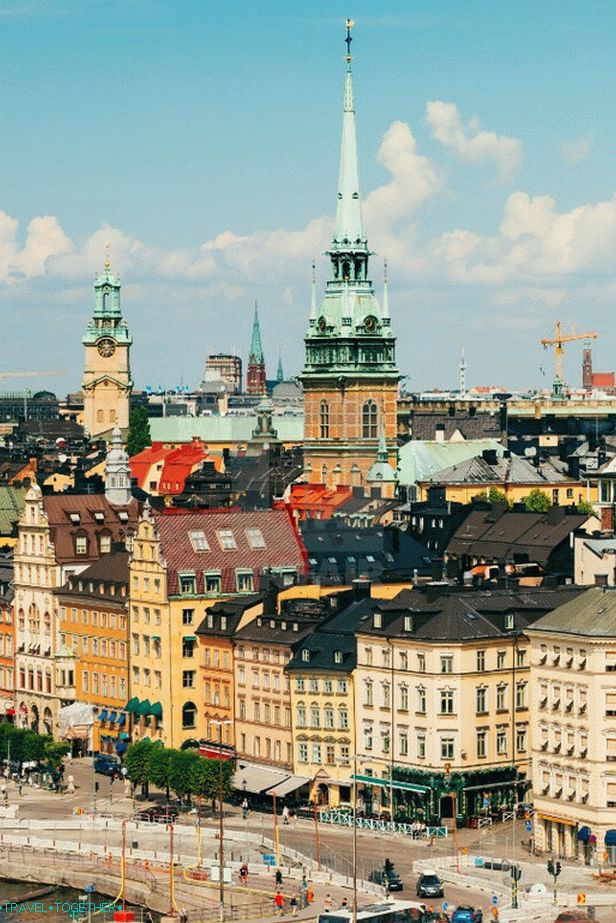 The German Church (or the Church of St. Gertrude) is located in Gamla The camp in the area where a large German lived in the Middle Ages community. The current building was built in the 17th century in style gothic revival and baroque on the site of a small medieval the chapel. The 96-meter high tower with a beautiful spire was completed. in 1878. 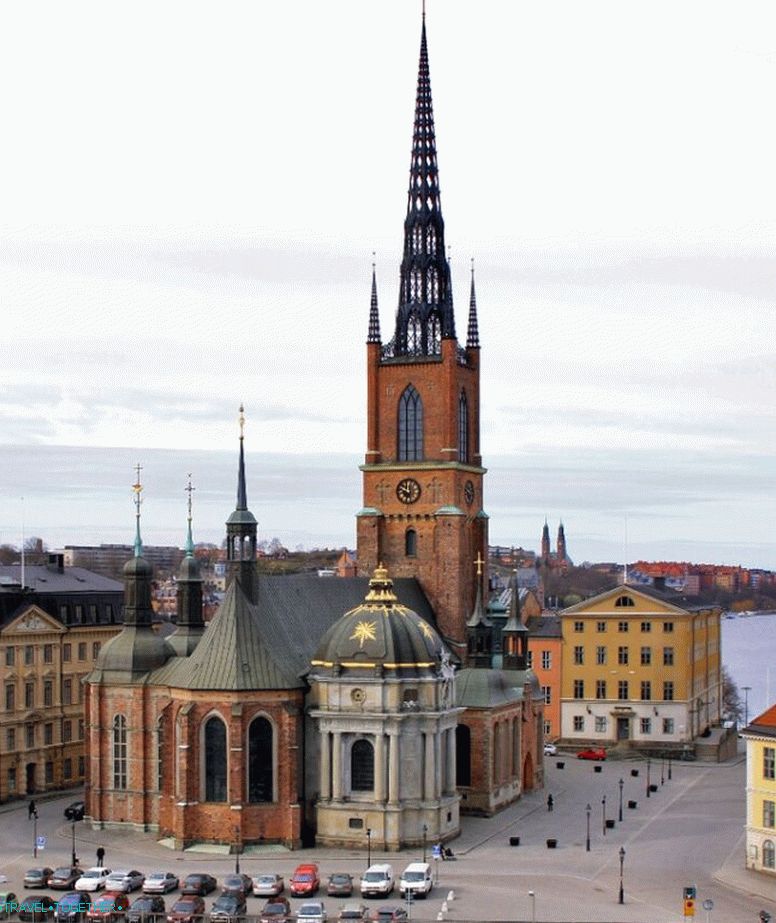 Riddarholmen’s Church is one of Stockholm’s oldest buildings, located on the eponymous island near the royal the palace. This beautiful gothic church was founded in the 13th century and is the burial place of the Swedish kings for almost four centuries. 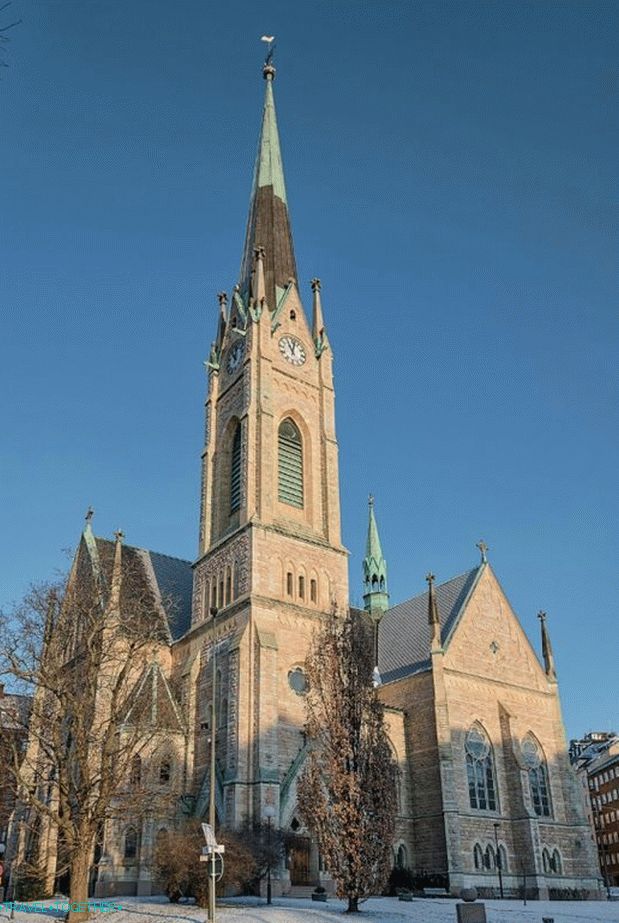 Church of sv. Oscar – one of the largest religious buildings Stockholm, located in the southeastern part of Ostermalm. The church was built in the early 20th century in the late Gothic style. 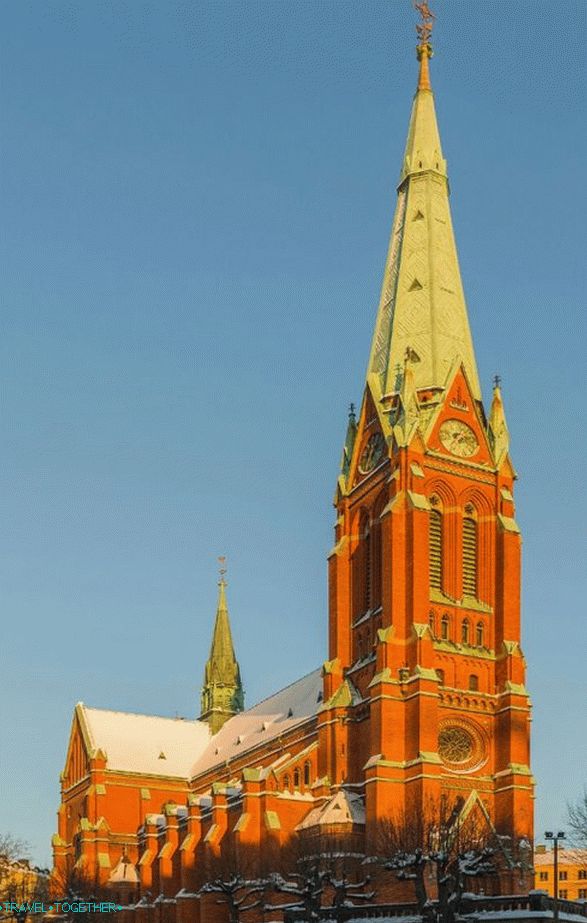 Church of sv. St. John is a large late-style brick church. Gothic, built in the late 19th century. Located in the county Norrmalm. 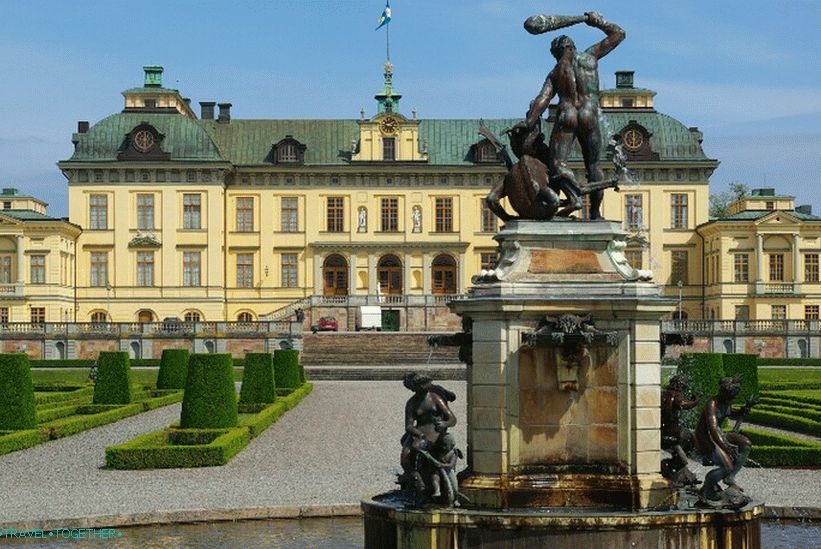 Drottningholm – the summer residence of the Swedish royal family, magnificent palace of the 17th century with a park included in the list UNESCO World Heritage Site. Built in the image of Versailles. 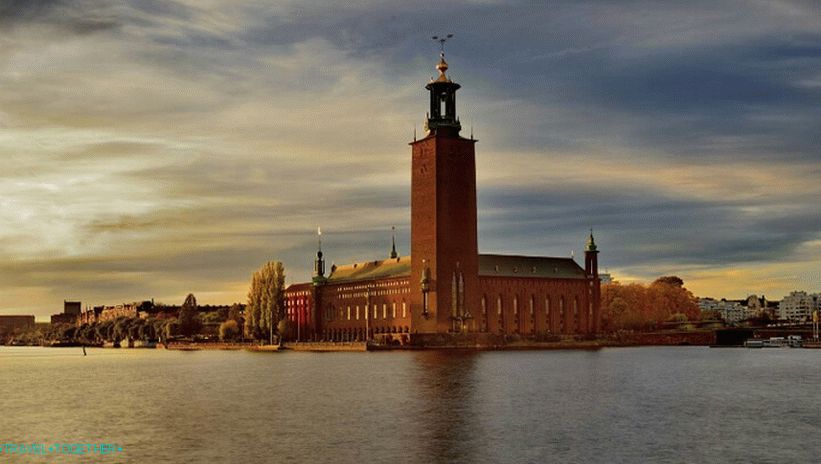 Town Hall – one of the most famous buildings in Stockholm, completed in 1923. For the construction of the town hall was used about 8 million. bricks. The building is famous for the Blue Hall, where the most the largest organ of Scandinavia, and the Golden Hall with 18 million mosaic tiles, which depict the Swedish history. Also here is the Nobel Prize. 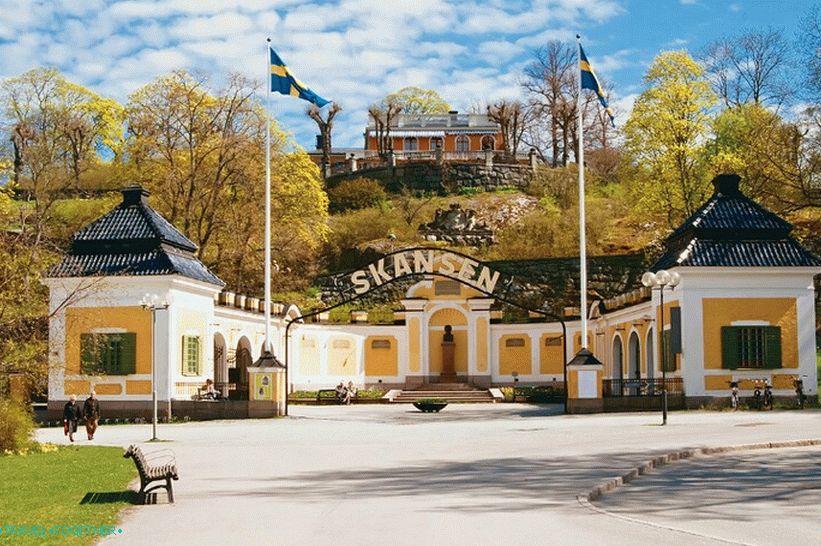 Skansen is the oldest open-air museum in the world, which presents historic Sweden in miniature. These are more than 150 buildings. – houses, churches, schools, shops and workshops that “tell” about life and life in the country in the Middle Ages. 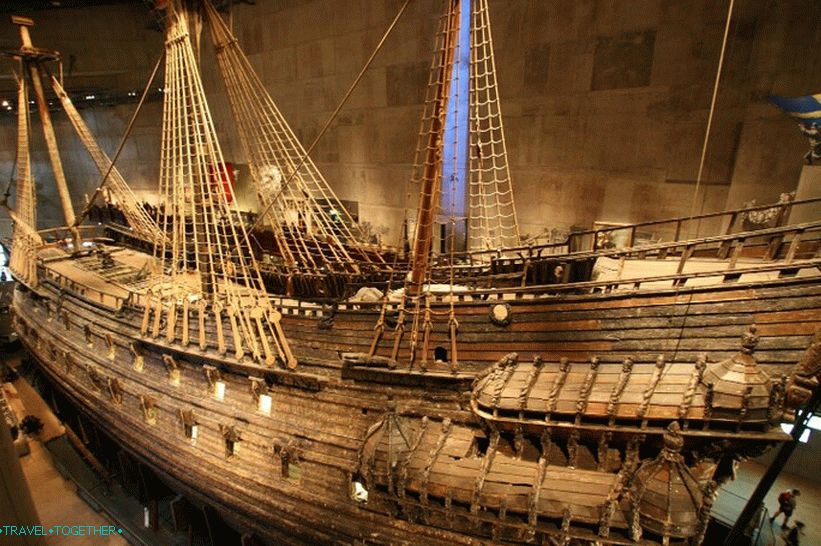 The Vasa Museum is one of Stockholm’s most famous museums. which the main exhibit is a real fighting ship 17 century. Vasa was one of the most powerful ships of the time and the pride of the Swedish fleet. He sank during his first sailing 30 minutes after the solemn departure. Ship lay at the bottom of 300 years and was raised in the middle of the 20th century.

Ostermalm is the most exclusive area of ​​the city with luxurious shops, chic restaurants and antique shops.

Stockholm on the map of Sweden