St. Gallen (Switzerland) – detailed information about the city from a photo. The main attractions of St. Gallen with a description, guides and maps.

St. Gallen is a city in eastern Switzerland and the capital of the same name. canton. Located between Lake Constance and the foothills of the Alps on altitude about 700 meters above sea level. St. Gallen – small beautiful city with a wonderful pedestrian historical center and houses that are known for their ornate bay windows in the Renaissance and Baroque style. Its main attraction is an ancient abbey with an impressive baroque cathedral and by the library. Abbey and library are included in the list of objects UNESCO World Heritage Site.

St. Gallen is located in a hilly area on the Steinach River, which flows into Lake Constance. The city is in a peculiar the valley between the two heights – Rosenberg (in the north) and Freudenberg (in the south). The climate of St. Gallen is temperate. Summer is warm and the winter is pretty cool. The weather is largely determined wind direction. Often in winter cold northerly and easterly winds bring frosts and snowfalls. Due to the proximity to Lake Constance in cold periods are possible fogs.

The city of St. Gallen grew up around the Benedictine abbey of St.. Galla, founded in the 8th century. According to legend, the monastery was founded Irish monk and missionary Gall, who settled by the river Steinach. By the 9th century, the abbey became one of the largest and flourishing monasteries in the eastern Alps. 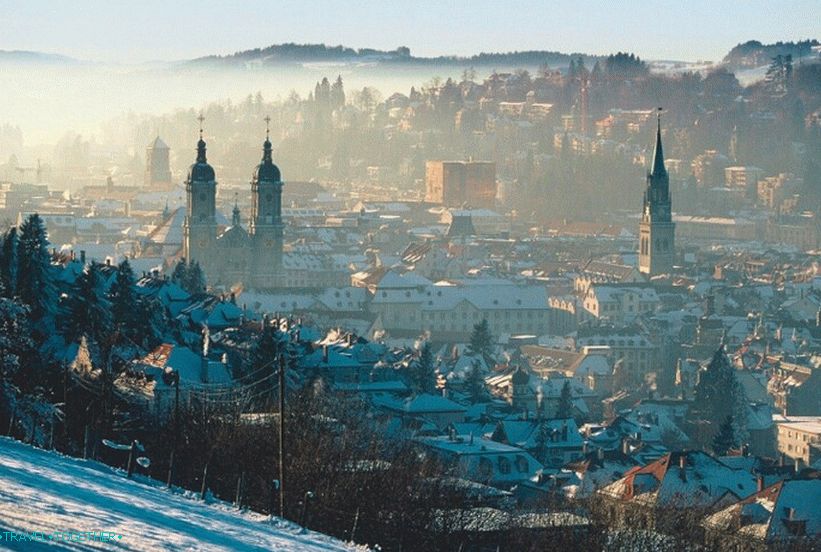 In 1415, St. Gallen bought freedom from the German king Sigismund And in 1454 he became a full member of the Swiss Confederation. During the Reformation, the city became Protestant. With this abbey remained Catholic until 1803.

In the 15th century, St. Gallen was known for its textiles. In the 19th century The first embroidery machines were developed here. And in the 20th century textile industry has become the most important industry cities.

The nearest airport is Zurich. From Zurich and most other cities in Switzerland in St. Gallen can easily be reached by train ride.

The main attraction of St. Gallen is the ancient Benedictine monastery of sv. Galla It was founded in the 8th century and The Middle Ages was one of the most important spiritual centers. Europe. Magnificent buildings with a baroque cathedral and an impressive collection of original manuscripts in the library make visiting the monastery is very interesting. 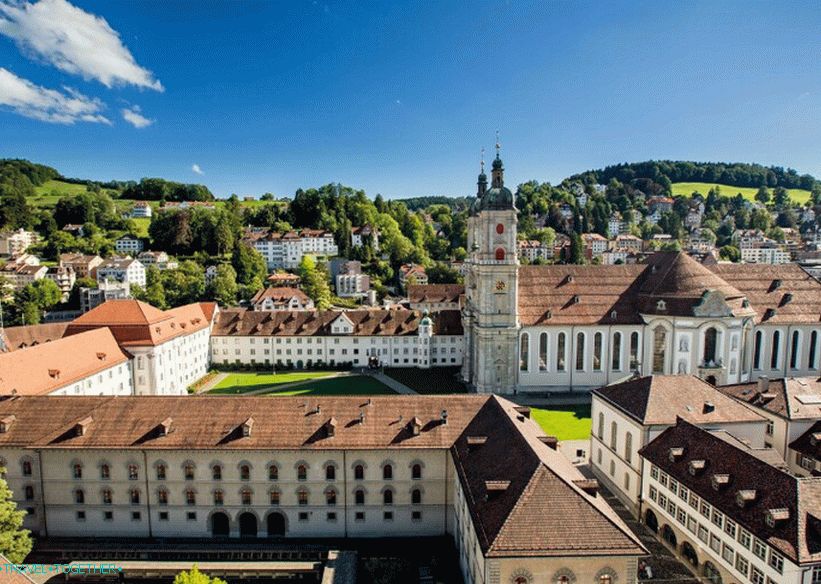 The most impressive and beautiful building of the monastery are magnificent baroque cathedral. Church was built in the 18th century and is one of the most beautiful religious buildings of Switzerland. The building has two towers (which have long been became the hallmark of St. Gallen) and a beautiful strict facade. The interior of the cathedral is richly decorated with stunning frescoes and sculptures. 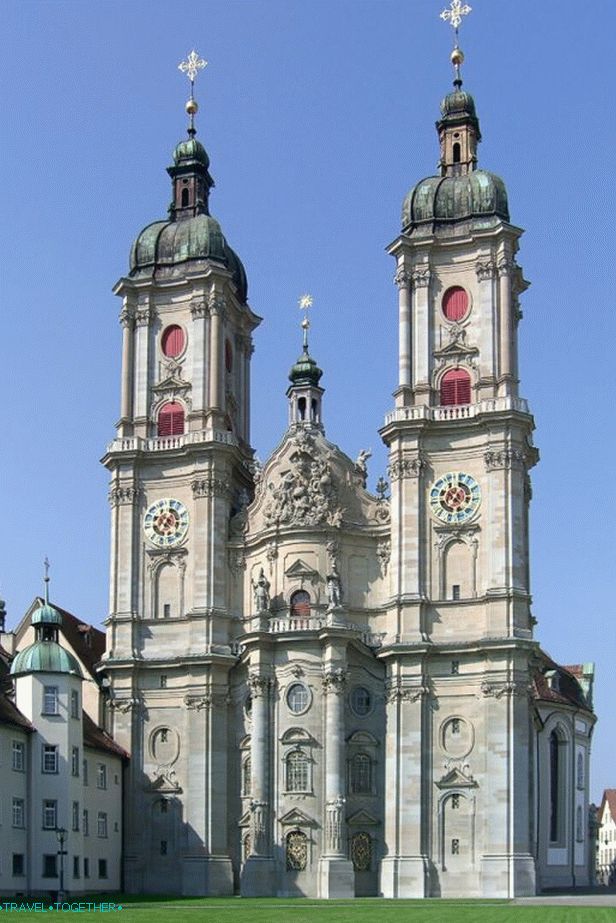 The most interesting feature of the abbey is the awesome the library, which is considered one of the largest and oldest in the world. It includes 170,000 books and 2000 original documents. period of the Middle Ages, which indicate the development European culture, science and history. The library is located in beautiful hall in rococo style. Also to the library rooms adjacent lapidary, which stores archaeological artifacts from the first cathedral built in the 9th century to the era Carolingian.

Also when visiting the abbey, pay attention to Karlstor – medieval city gates built in the 16th century. In the second half of the 16th century around the catholic monastery was built a wall to separate it from the Protestant city. Until our only a small part of the original wall was preserved along streets Zeughausgasse. The rest of the fortifications were destroyed in mid 19th century. 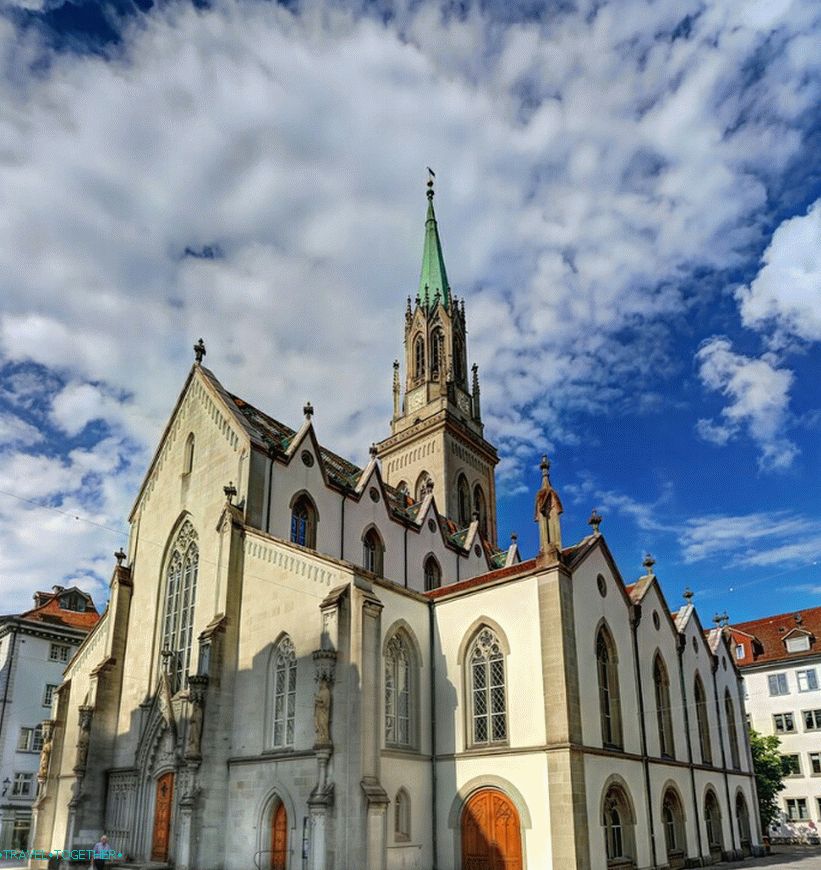 Church of sv. Lawrence – Protestant Neo-Gothic Church, built in 1803. Fifth building in last 800 years old. The first church on this site was built in 13 century. 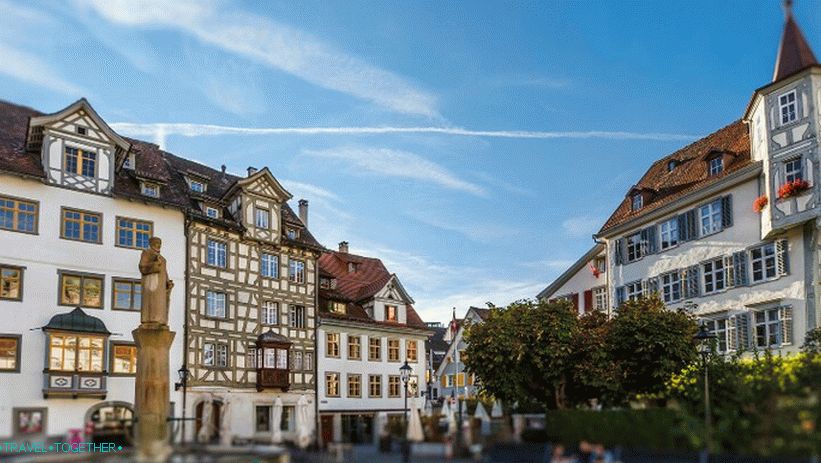 The old town of St. Gallen is a pedestrian zone. The historical core has a compact size and is famous for its rich decorated with bay windows. There are 111 such windows in total. which are located in the houses of the 16-17 century, owned by merchants textiles. The most beautiful houses are located on the streets of Marktgasse, Schmiedgasse, Spisergasse and Kugelgasse. Central square The old town is Marktplatz.