Siena (Italy) – the most detailed information about the city with photos. Siena’s main attractions with a description, guides and cards.

Siena is a city in northern Italy in the Tuscany region. Is one of the most popular tourist centers of the country with the richest cultural and historical heritage. Siena is considered by many to be one of the most beautiful medieval cities of Italy, which is not only retained the original historical core, but also the atmosphere. This the ancient city, founded by the legend of Remus, in the Middle Ages with might and main vied with Florence. Siena is located on three hills with a heart on Piazza del Campo, where the Roman Forum used to be. The historic center is a World Heritage Site. UNESCO.

Siena is located almost in the center of Tuscany, 70 km south of Florence. The city is located between the valleys of the Arbia, Merse and the hills of Chianti. The climate is Mediterranean. Summer is hot enough Winters are mild with occasional negative temperatures.

The first settlement on the site of Siena existed in the 4-5th century before our era and belonged to the Etruscans. The first written mention of the city date from the beginning of our era, when under Emperor Augustus was founded the Roman city of Seine-Julia. According to legend, Siena was It was founded by Sennius and Askii, the sons of Remus. After the collapse of the Roman Empire was first owned by the Lombards, then the Franks. 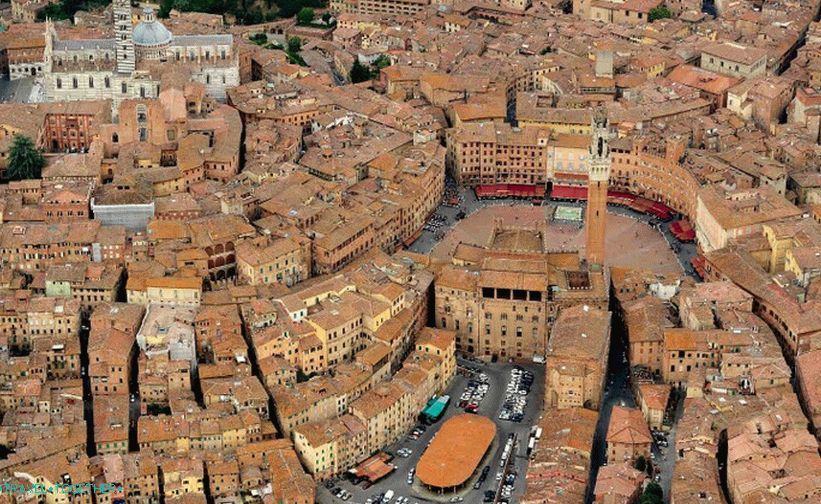 In the 10th century, due to its favorable position at the intersection trade routes, Siena has become an important medieval city. In the 12th century it became independent, and in the 13th century the Siena was formed republic. This state occupied the southern part of Tuscany and was one of the most prosperous in italy. Siena Republic long time was the main competitor and opponent of Florence. it the state lasted until 1555.

In 1240 a university was founded in Siena. In the 14th century there is a gradual decline of the Republic of Siena, which continues in the 15th century. In 1555 the city was besieged by the Spanish troops and after a year and a half of heroic resistance taken. The Republic of Siena fell and ceased to exist. In a few For years, Siena was incorporated into the Duchy of Tuscany and became belong to Florence. Since then, the city has turned into an ordinary provincial town. But precisely because of this, Siena has kept almost original medieval historical Centre.

The nearest airports are located in Florence, Pisa and Bologna. Sena buses connect Siena with Bologna Airport two times a day. day. There is also a bus service to the airport of Pisa. Of Florence and Empoli in Siena almost every hour trains go and buses. The bus line SITA departs from the capital of Tuscany with bus station across the street to the west of train station Santa Maria Novella. Also regularly go buses from Rome.

Popular purchases in Siena are leather, gold, ties, tapestries and embroidery, fabrics. A huge market is held every Wednesday around Fortezza Mediceana from about 7.00 to 14.00. In the center there are many shops, including well-known international and European brands. 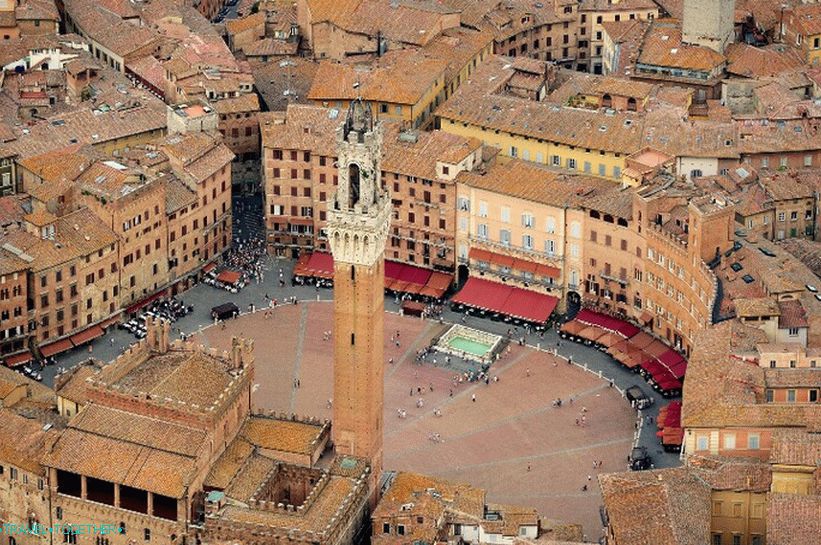 Piazza del Campo – a wide and spacious square, the heart of the old cities. This is one of the largest medieval squares in Europe, surrounded by facades of historic palaces dominated by Palazzo Pubblico. On the square is the fountain Fonte Gaia, restored in the 19th century. Piazza del Campo was founded in 1300 year and for many centuries is the center of urban of life.

Palazzo Pubblico – Gothic Town Hall, built at the end of the 13th – the beginning of the 14th century from travertine and brick. In the center of the first floor is the coat of arms of the Medici family, who ruled Siena in the 16th century as the great princes of Tuscany. The interior of Palazzo Pubblico is simply preserved. wonderful. Here you can look at ancient frescoes and visit city ​​history museum. The architectural dominant of the town hall is tall tower torre del mangia. It has a height of 102 meters, and to climb its observation deck you need to overcome 400 steps. 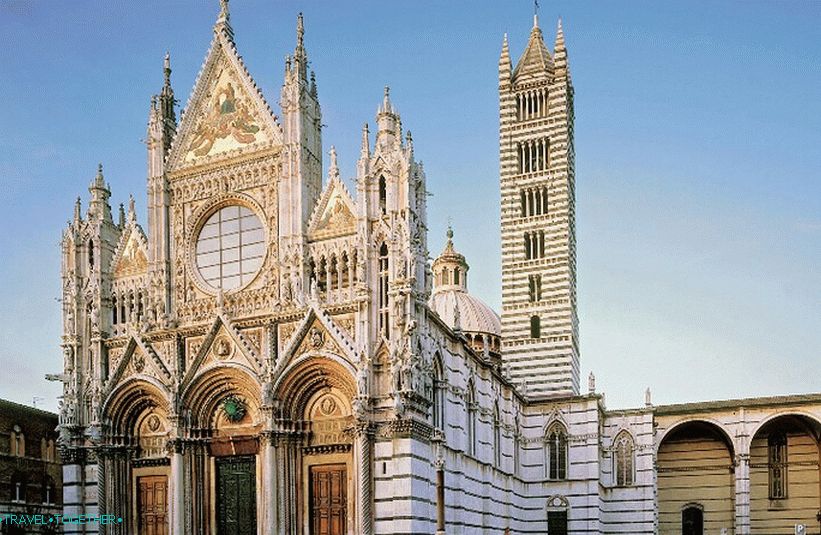 Santa Maria Assunta – cathedral, designed by Giovanni Pisano. Considered one of the most beautiful specimens. Gothic style in Italy. The cathedral has a marble facade of stripes. marble of different colors. It contains more masterpieces and artistic treasures than in many prestigious museums: works Pisano, masterpieces of Donatello, Bernini and many others. One of the most unusual things in Siena – the unfinished facade of the cathedral, which is 14 century was to expand the existing church and create a new nave, 100 meters long, leaving the original nave as a transept this gigantic building. 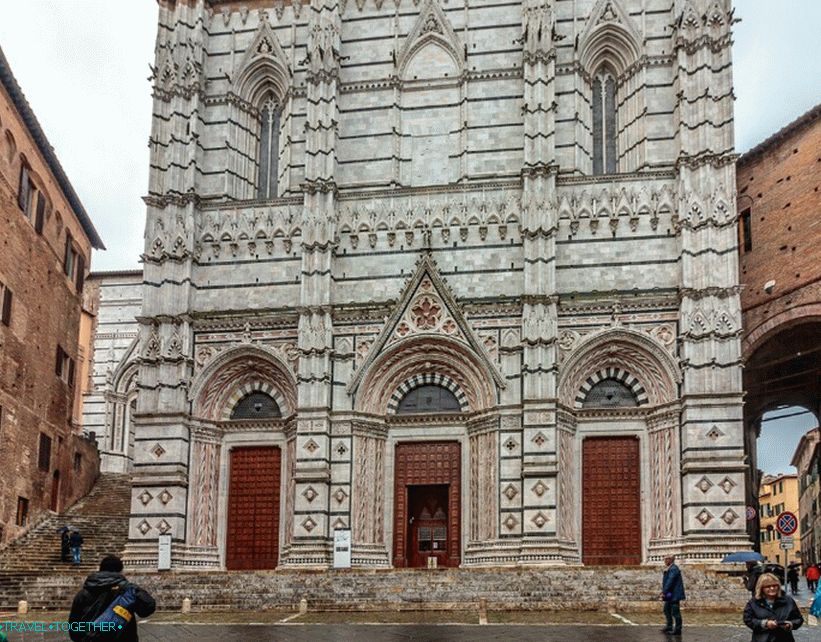 The baptistery is located near the cathedral. Built in 1325 and is one of the most important religious sites in Siena. Inside are ancient frescoes. 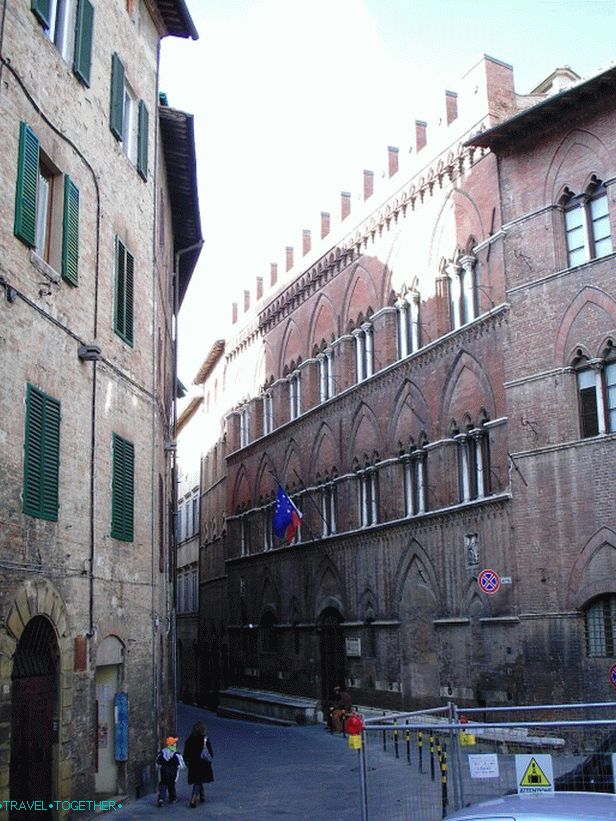 National Gallery – located within the walls of an elegant gothic palazzo of the 15th century. Contains paintings by Siena artists 12-16 centuries. 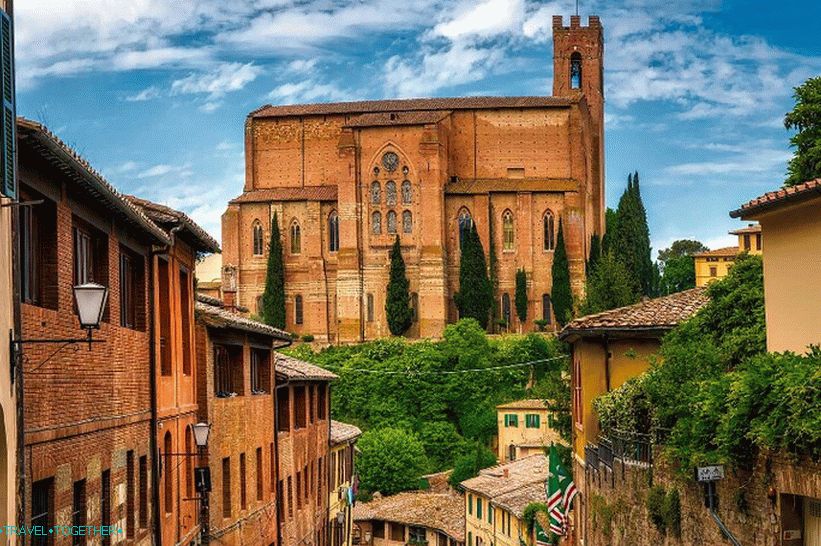 San Dominico is a strict brick building in the Cistercian Gothic style, built in the 13th century. In 1340 was built Venetian bell tower, which stands out in architecture of the church. 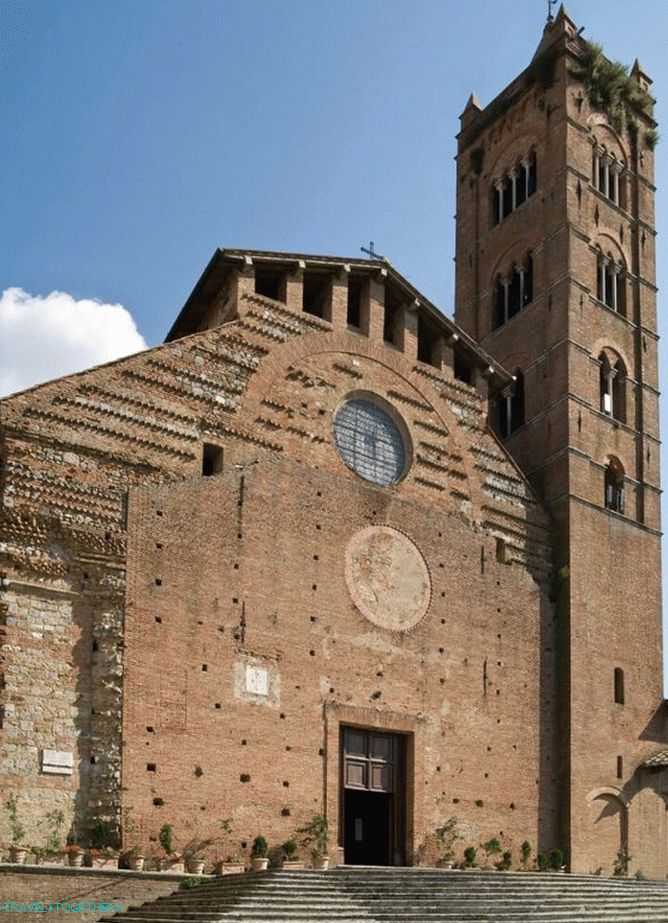 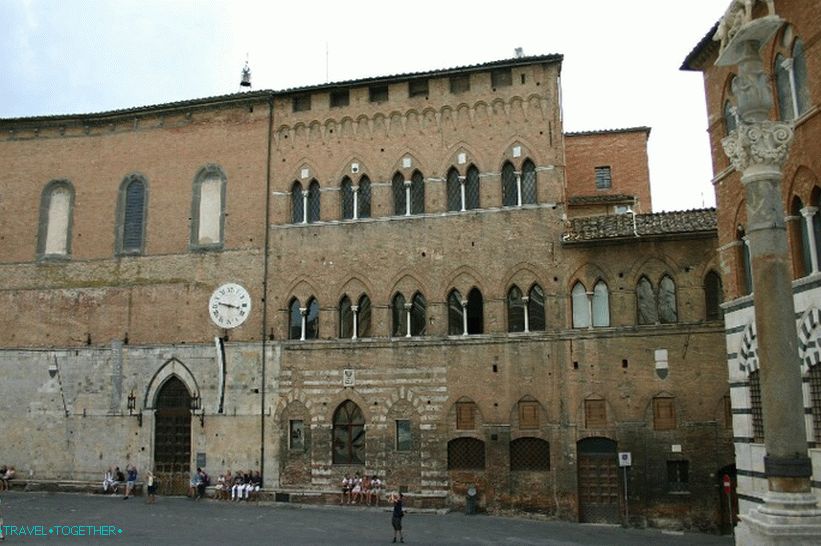 Santa Maria della Scala – the church and the ancient hospital, built in the 13th century and radically rebuilt in the 15th century. Considered one of the first hospitals in Europe and one of the oldest in a world that still works. Located on the main apse 18th century large fresco by Sebastian Conca. Pay attention to the altar Bronze Christ of Vecchietta. This is a Renaissance masterpiece sculptures that are compared to the works of ingenious Donatello. 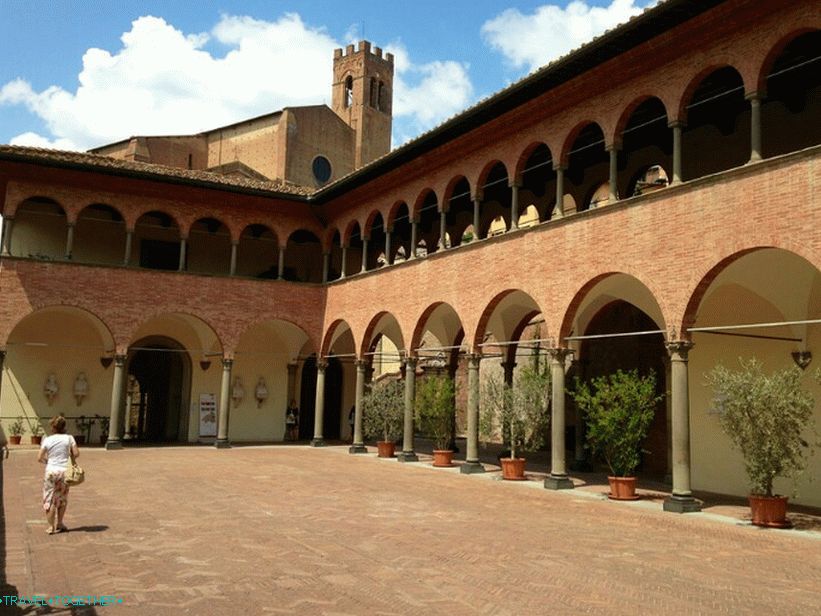 Monastery of St. Catherine built on the spot where the house stood alone of the most revered saints of the Roman Catholic Church. Catherine was born in Siena and was the daughter of a local dyer. 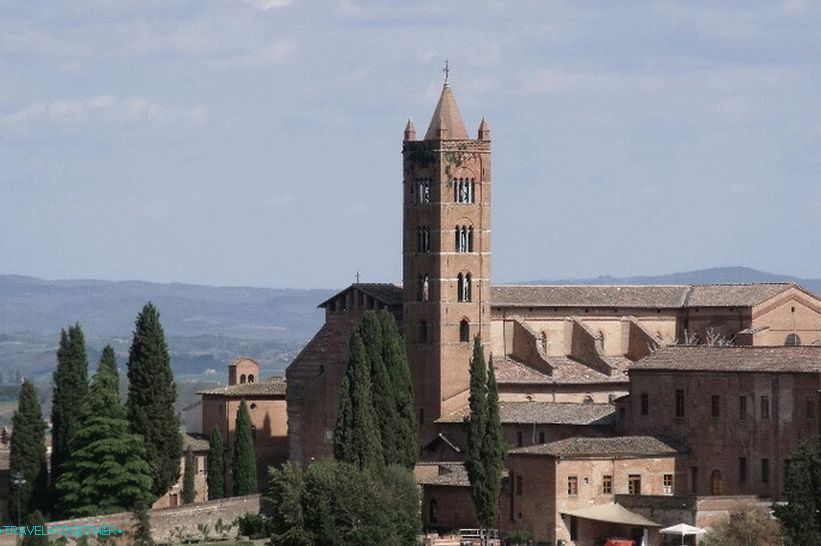 Santa Maria degli Servi – Romanesque-Gothic church, located in the southeastern part of the old city of Siena. Was built in the 13th century, and then rebuilt in the 15-16 centuries. The interior of the church is decorated with several interesting works. art. Nearby are the impressive Porta Romano – the ancient city ​​gate. 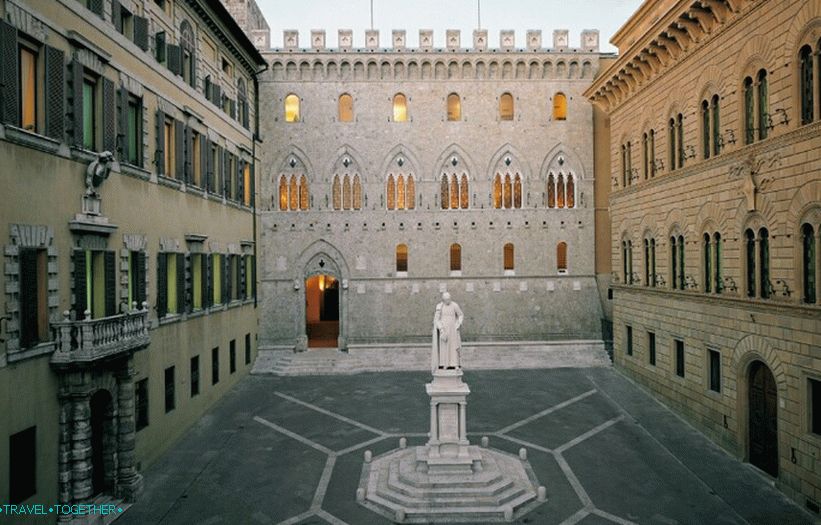 Salimbeni – Gothic palace on the same square, which form the facades of three historic buildings. Square itself until the 18th century was a palace garden. The buildings of the Palazzo Salimbeni is located the head office of Monte dei Pasha di Siena, one of the oldest banks in Italy, founded in 1472.

Siena on the map of Italy