Sibiu (Romania) – the most detailed information about the city with photos. Sibiu’s main attractions with a description, guidebooks and cards.

Sibiu is a city in the heart of Romania in the historical area Transylvania. Founded in the 12th century and is the largest medieval fortified settlement of Saxon migrants. The old city of Sibiu preserves the grandeur of its early days and has many impressive buildings, old churches and fragments powerful fortifications, including towers, bastions and wall sections. Like Sighisoara and Brasov, the historical center of this ancient Transylvanian city has a wonderful medieval atmosphere and architecture, as well as distinct German features.

Sibiu is located in central Romania (not far from geographical center of the country) on the Sibin River, 275 km to northwest of Bucharest is surrounded by low mountains. It has a moderate continental climate with warm, humid summers and quite cold, often snowy in winter. In antiquity on the site of Sibiu was a Dacian settlement under called Sedonia. The city is first mentioned in the 12th century as Hermannstadt. It was founded by Saxon (German) settlers. By the 14th century, Sibiu had become one of the most important shopping centers. Transylvania and also became the most significant of the Saxon cities of Romania.

At the end of the 17th century, Sibiu became the capital of Transylvania. B 18 – 19 For centuries, the city was one of the centers of the Romanian national movement. After World War I, Sibiu became part of Romania. 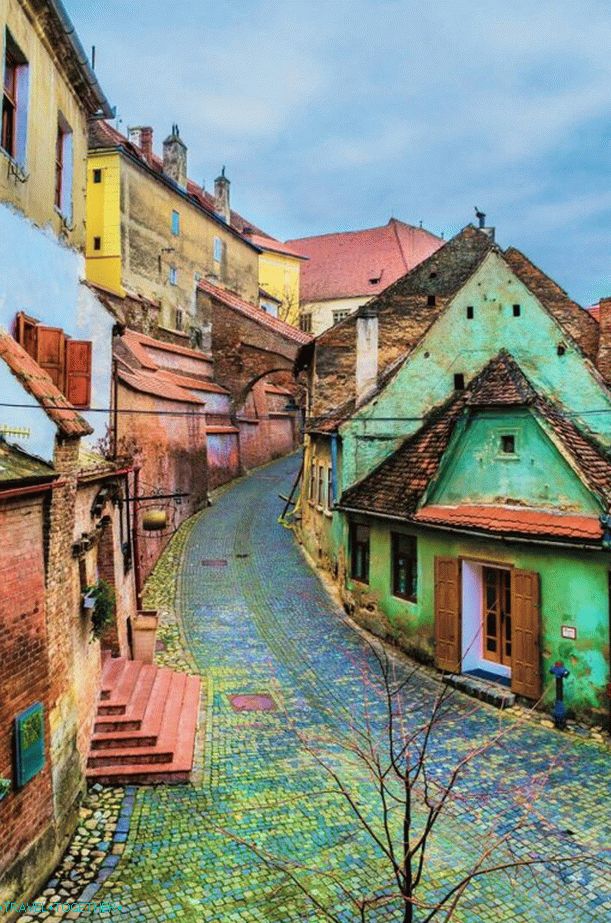 The historic center of Sibiu is divided into Upper Town, where most historical sites are located, and the Lower a city that was considered an artisan quarter and limited impressive city walls with defensive towers. 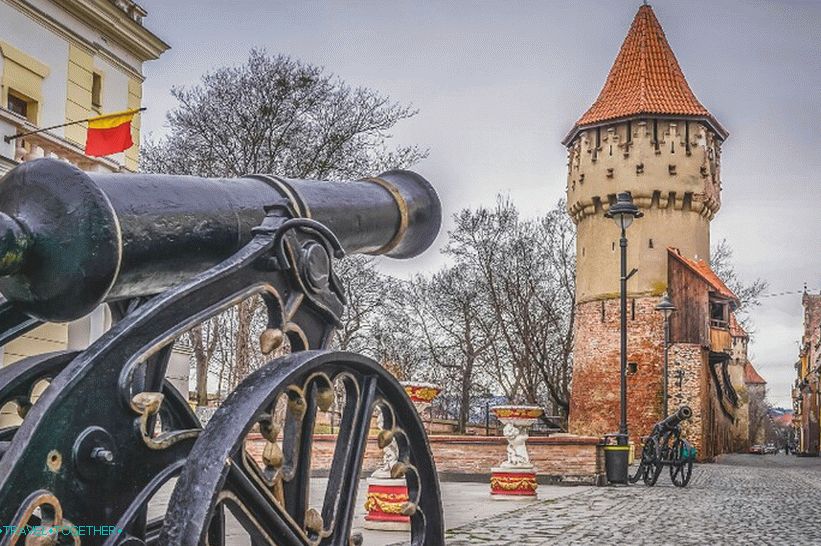 Towers and walls of old Sibiu

Sibiu was one of the most powerful and prosperous medieval fortified cities of South-Eastern Europe. This is actually a fortress built by German settlers and surrounded by mighty walls with towers. Original medieval the fortifications included several dozen towers (39 defensive towers and 5 bastions), four gates and five artillery batteries.

Until our time, the original condition has been preserved. large sections of the walls, especially in the southeastern part of the old cities. The following towers survived the test of time: Tower Arquebusier (Turnul Archebuzierilor), Carpenters Tower (Turnul Dulgherilor), the Potters Tower (Turnul Olarilor) and the Big Tower (Turnul Gros). The first three were built in the 15th century, and the last – in 16th century.

Sights of the Upper Town of Sibiu

The upper city was the richer part and the shopping center. medieval sibiu. 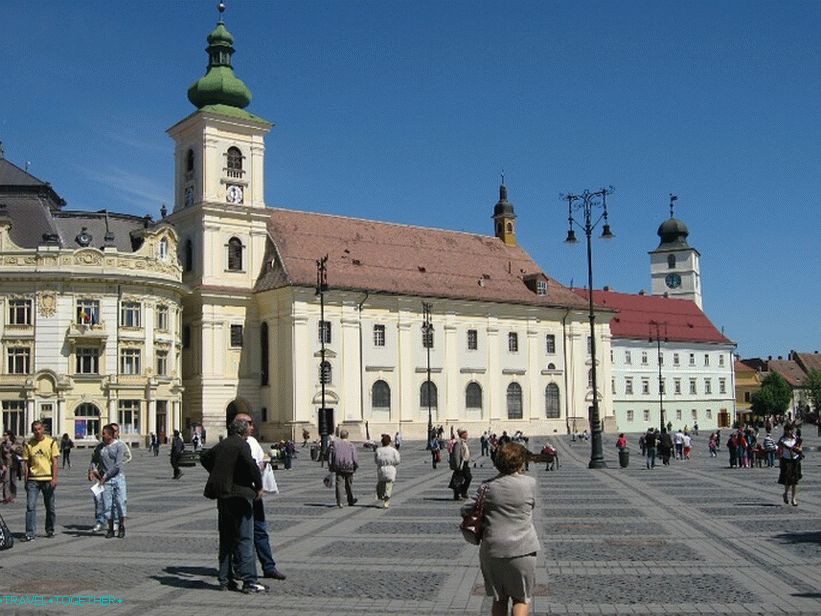 Big Square – the largest urban area of ​​Sibiu, first mentioned as a grain market in 1411. Area on throughout its history has been the center of urban life and trade. Located in the heart of the old walled city, it was declared a monument of architecture by UNESCO. Here are some of the most impressive buildings of sibiu.

The Roman Catholic Church is a beautiful baroque structure, built between 1726 and 1738. Has a gorgeous interior with intricate carvings and marble finishes. Brukenthal Palace – a magnificent building in an elegant style. Late Baroque of the 18th century, located in the western part of the Great square. Now here is one of the oldest art museums of the country with a collection of Romanian and western arts, religious sculptures and icons of 17-18 centuries.

Small Square – Another Important Urban Space the cities where the most famous masters of Sibiu lived (in arcade houses with north and east side). The Council Tower is an impressive building of the 13th century. Originally used as an entrance gate to the second row of fortified walls, built around a medieval city. Over the centuries the tower served as a grain store, a prison, a fire tower, and even a museum nerds On the top floor there is an observation deck with magnificent views of old Sibiu. 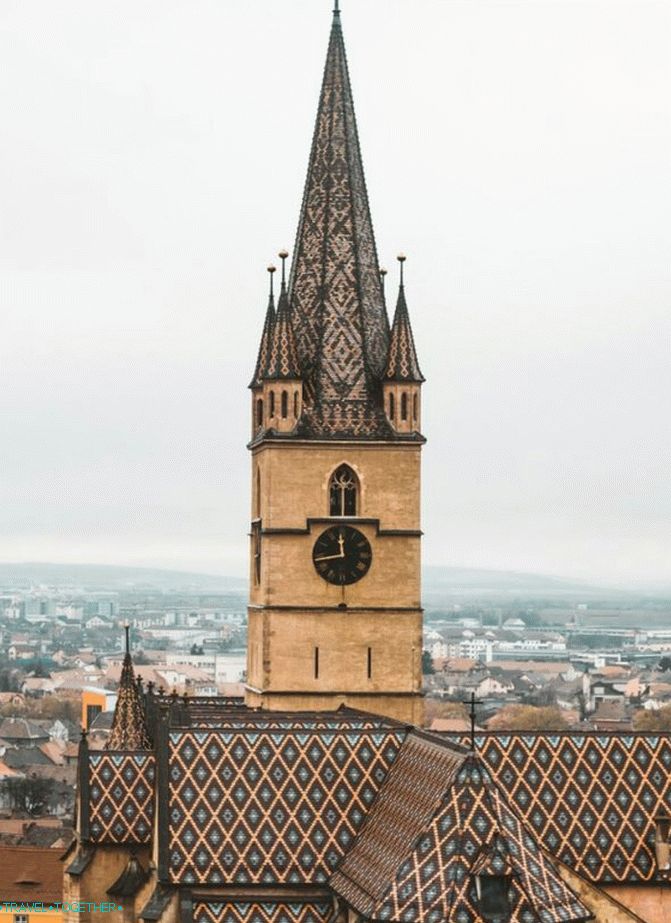 Square Hue is famous for its ancient buildings in the Gothic style. The architectural dominant here is the Gospel Cathedral of the 16th century. This is an impressive five-pointed religious building. towers, built in 1520 in place of the old Romanesque basilica The most interesting feature of the interior of the church is giant medieval fresco on the north wall. Also the cathedral It has the largest altar in Romania.

Sights of the Lower Town of Sibiu

The lower city includes the area between the river and the walls of the Upper. cities. It developed around the earliest fortifications of Sibiu. Lower the city has long and rather wide streets, simple architecture and usually two-story houses with high roofs. The Bridge of Lies or the Brunov Bridge is an iron bridge in the Lower City, built in 1859. Is the first forged bridge in Romania. Arched stairs – a medieval passage with two staircases and arches that connects the Upper and Lower Town. This is one of the most scenic spots in sibiu. 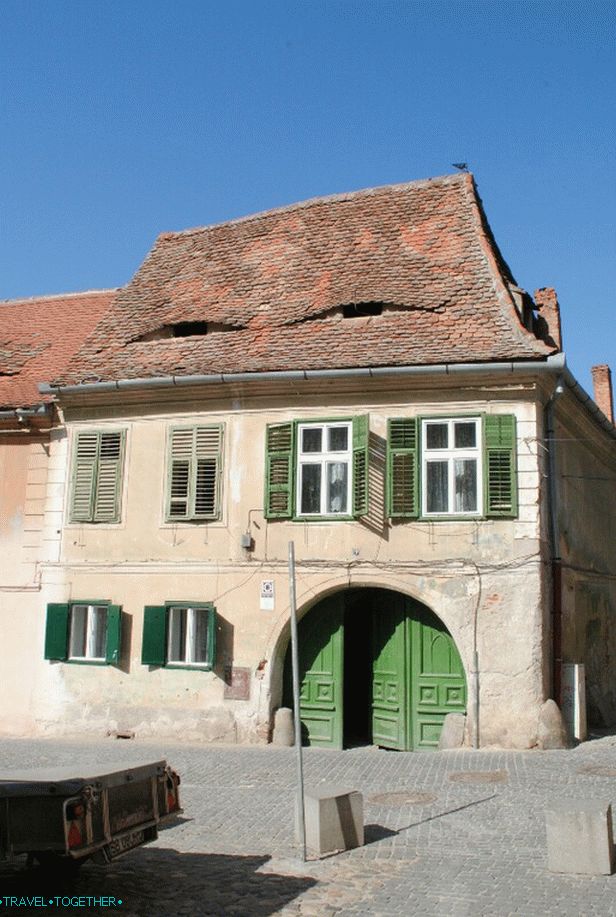 Jewelers Square – a small cozy area, surrounded by charming old houses. In the past this place was the main point of the passage connecting the Small Square with the Lower the city. 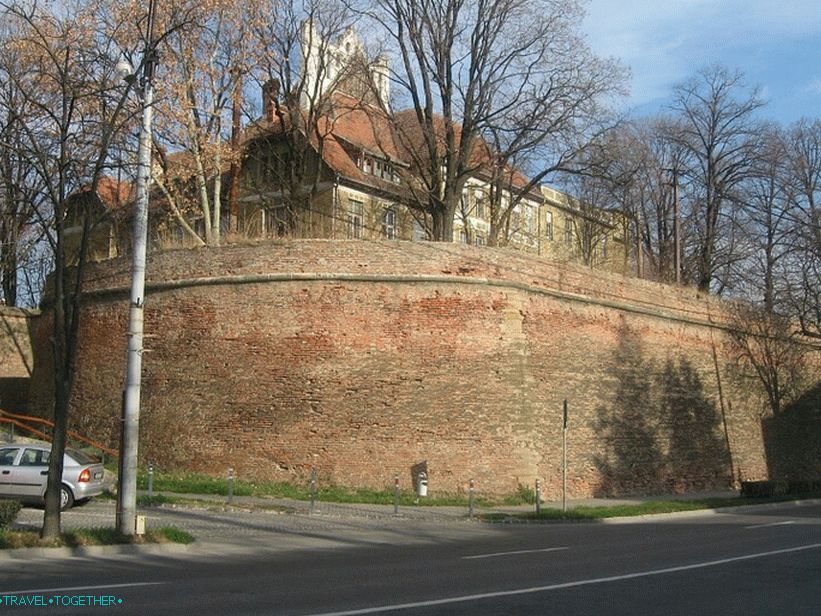 Another interesting attraction of the Lower Town is a brick bastion of Haller, built in the 16th century. 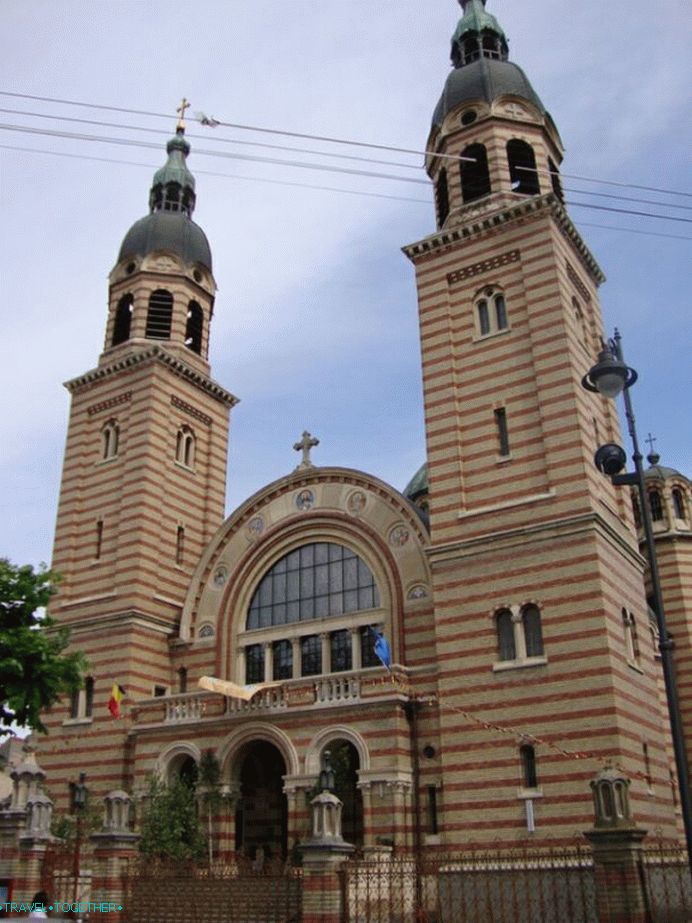 The Cathedral Orthodox Cathedral is a religious building in Neo-Byzantine style built in the years 1902-1906 former greek church. This is the second largest Orthodox church. Romania. 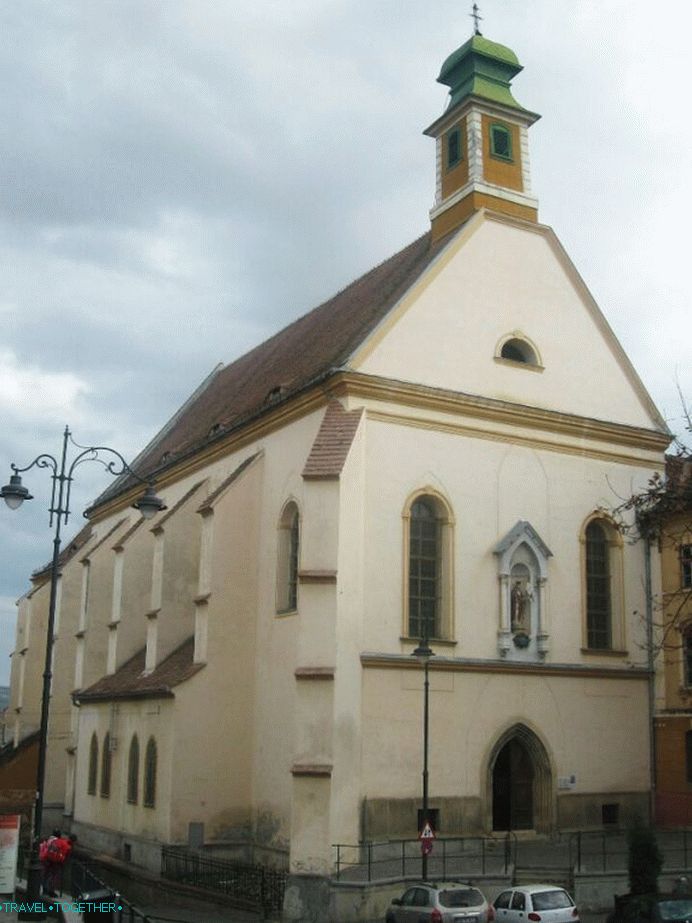 Ursula Monastery – originally Dominican Monastery 15 century, which became the monastery of the Ursulin Order in 1755. The monastery church has a Gothic structure and a baroque interior. 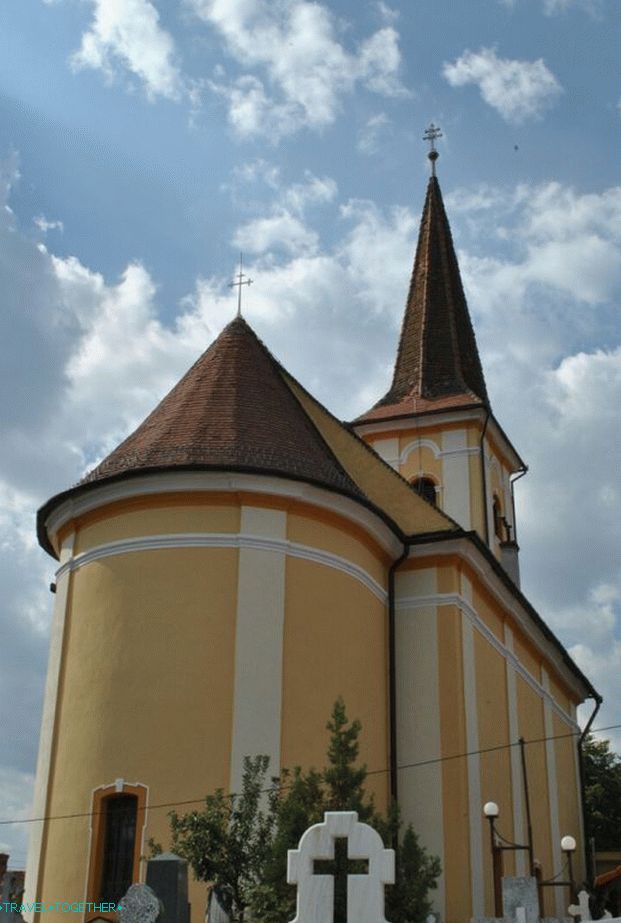 Sibiu on a map of Romania