Seville (Spain) – the most detailed information about the city with photos. The main attractions of Seville with a description, guides and cards.

Seville is a city in southern Spain, the capital of Andalusia. Situated on a plain on the river Guadalquivir, which divides the city into two parts – historical center (on the left bank) and Triana. Seville – one of Spain’s most charming cities that can boast amazing sights and relics of the past, elegant architecture and magical atmosphere. Here in the capital Andalusia, faces and fancifully blends the eastern and Western culture, Moorish and Spanish historical heritage. The city enchants at first sight, it’s a real cultural and historical heart of spain.

Seville is an elegant building and cobbled streets, old street lights and horse-drawn carriages, incendiary rhythms of flamenco and as many as three UNESCO World Heritage sites. Here you can see attractions that will make an impression! For example, the Seville Cathedral is one of the largest Gothic churches. in peace with the majestic tower that was once a minaret ancient mosque. Or the Moorish palace of the Alcazar with a luxurious Mudejar decor and beautiful gardens. But the main charm this city is hidden in small courtyards and winding alleys Medieval Barrio Santa Cruz.

Seville is located in the fertile valley of the Guadalquivir. The terrain is flat with an average height of 7 meters above sea level. The climate is subtropical Mediterranean with very hot summers and wet mild winter.

September – January is one of the best seasons to visit Seville. AT this time, tourists here are quite a few, low prices for hotels and tickets In winter, warm enough, but often rainy.

February – June is considered the high season. At this time, pass the most famous festivals, excellent comfortable weather prevails, and a long light day will make it all happen.

July – August is not the best time to visit the capital of Andalusia. At this time it is very hot here. But if you are not afraid of the heat, then you can enjoy Seville without a lot of tourists.

Legend attributes the founding of Seville to the mythical Hercules. A few thousand years BC, the Phoenicians had already lived here, and during second century BC, the Romans founded the city of Ispalis here. AT early 8th century, the settlement was conquered by the Arabs. At that time the city bore the name of Ishbilla, which was later transformed into modern Seville. In the 9th century, the future capital of Andalusia was destroyed Normans.

In the 11th century, the Berbers conquered Seville. In the 13th century, the city became part of Castilian kingdom. The greatest flourishing fell on 15-16 century. After the discovery of America, Seville became one of the main trading ports of Spain and one of the cultural and artistic centers of southern Europe. 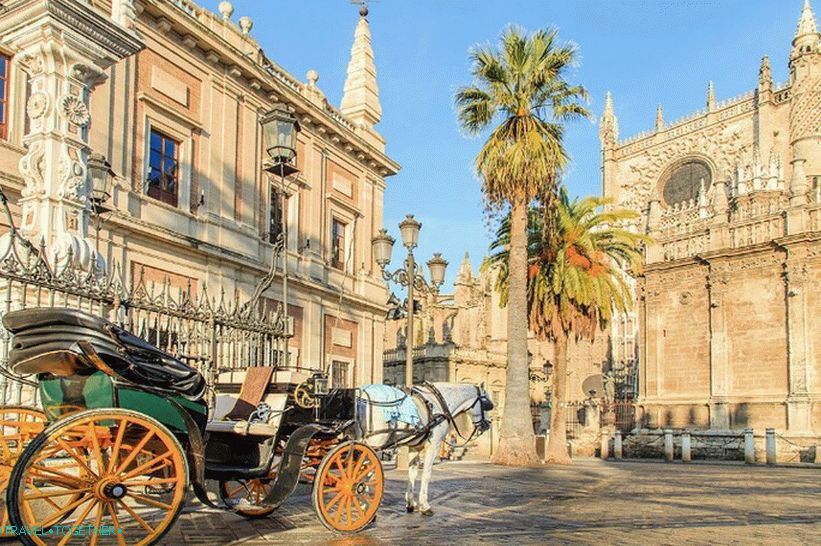 In the 17th century, the value of the city began to decline, and already at the beginning of 18 century, Seville has lost the status of the main shopping center Spain

Seville has an airport which is located half an hour from of the historical center and connects it with the largest cities of Spain and European capitals. From the airport to the center every 30 minutes bus goes. You can also get to the city by taxi in about 25 euros.

Seville is easily accessible by train and bus. From Barcelona and Madrid go high-speed trains. Santa railway station Justa is located in the northeastern part of the historic center.

Public transport is represented by buses, one line. Metro and short tram station. Metro crosses the city with west to east. Tram runs from the train station San Bernardo to Plaza Nueva. 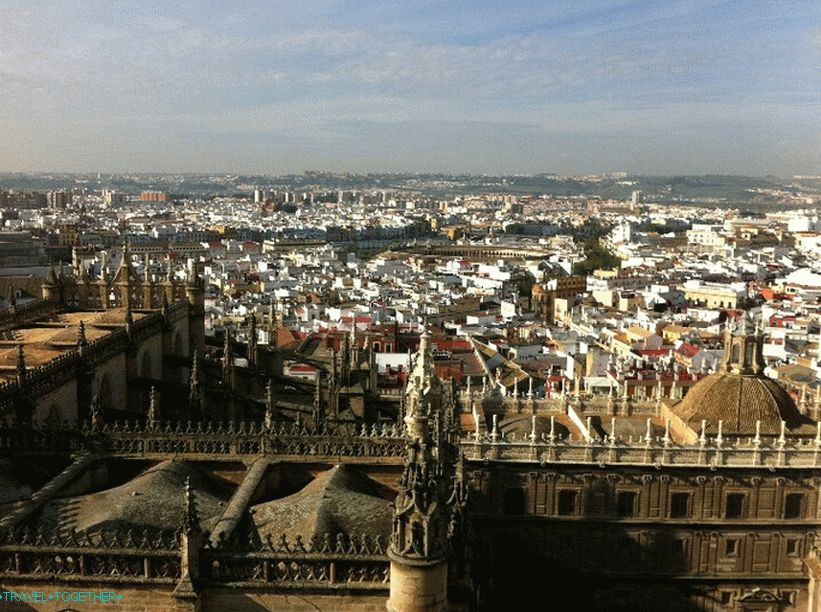 Seville is famous for its ceramics. Numerous shops (including including traditional goods and souvenirs) can be found on winding streets and alleys of the area of ​​Santa Cruz and all the old cities.

In general, in the capital of Andalusia, excellent delicious food and wine, a lot restaurants and cafes that will not leave hungry. It is important that the kitchen many restaurants in the evenings starting to work from 8 evenings

The most interesting sights and places Seville.

Seville Cathedral is the largest Gothic temple in World Heritage Site by UNESCO. This is a religious building. inferior in size only to the Cathedral of St. Peter in the Vatican and of sv. Paul’s in London. Interestingly, the cathedral was built on the site of the Moorish mosques of the 12th century. The construction of the temple began in 1401, after how the Spaniards recaptured the city, and ended only in 1506. Five years after construction, the dome collapsed. He was reinstated in 1519 As many as eight doors lead to the cathedral, and its interior amazes. The temple has the longest nave and the largest altar in Spain It is believed that there are the remains of Christopher Columbus, as well as the tomb of Fernando III of Castile. Seville the cathedral is surrounded by small columns, connected by huge chains. These chains were installed in 1565 to prevent entry merchants to the temple with their horses during the weather. In the north The facade has a collection of busts from sculptor Susillo, each of which is an important person for the city. 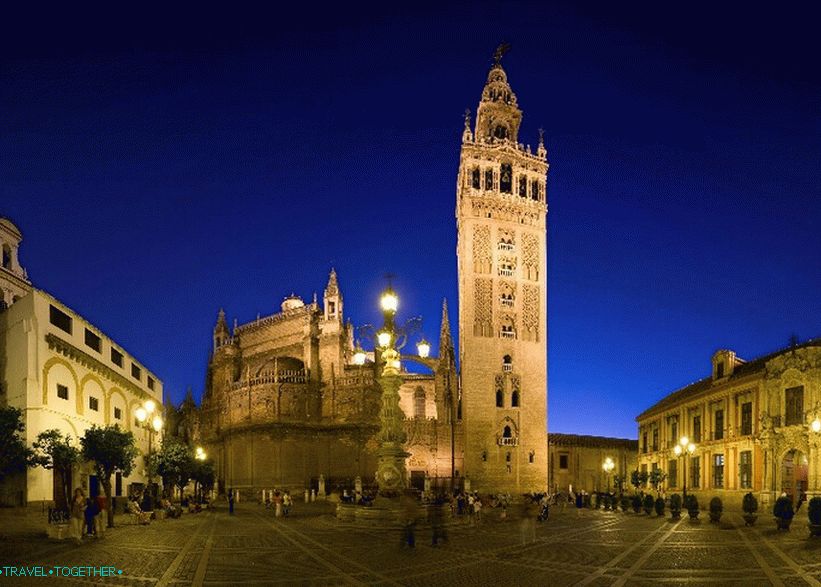 Giralda – one of the main symbols of Andalusia, tower-bell tower cathedral. This is probably one of the oldest structures. Seville, built in the 12th century as a minaret of a mosque. The tower has height of 97.5 meters, and at that time was one of the highest buildings of the world. The bell tower was rebuilt in the Renaissance style at 16 century, but it still retains the features of Moorish architecture. WITH June to September you can climb to the observation deck Giralda 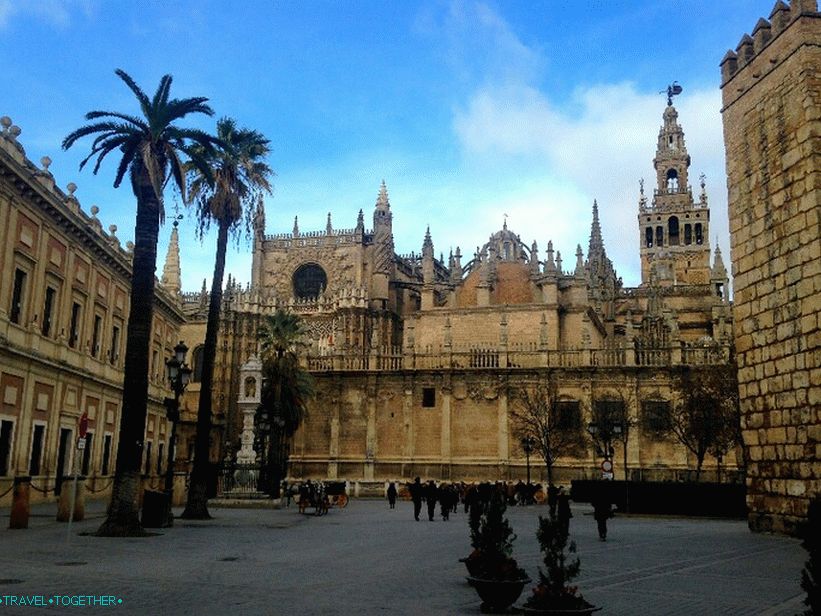 The Alcazar is another symbol of the capital of Andalusia, included in UNESCO World Heritage List. Royal Palace Seville was originally a Moorish fort, which in the 10th century erected the first caliph of Andalusia. Construction of the current The royal castle began in the 14th century. This is the best example. architectural style of Mudejar in Spain, although elements of Islamic architecture, gothic, renaissance and baroque are also distinctly noticeable. Alcazar is a Spanish word, synonymous with a fortified castle. In fact, the word comes from the Arabic word “al-Qasr”, which means a palace or fortress.

Originally, a Roman settlement was located on the site of the palace, later occupied by the Visigoths. In the 8th century, the city was conquered by the Arabs, who built a fortress here. In the 13th century, Fernando Castille transformed fortress in the royal palace. In the 14th century, Pedro I rebuilt Alcazar in the style of Mudejar. Mudehar is characterized by the fact that is a mix between muslim and christian architectural elements. This style can only be found on The Pyrenees.

At the entrance, be sure to pay attention to the Lion Gate. Left there is the room of Justice and part of the old Arab walls. On right the House of Commerce, in which they took Columbus after the second voyage. WITH the left side is the entrance to the courtyard and the gothic palace 13th century. If you go through the main entrance, you can see the palace in Mudejar style – the most beautiful building in Alcazar. Church of sv. Salvador – the second largest religious construction of Seville. Refers to the Roman Catholic Diocese. Building It was built on the foundations of Ibn Adabba – a mosque of the 9th century. Church stands out for its beautiful architecture and impressive interior. 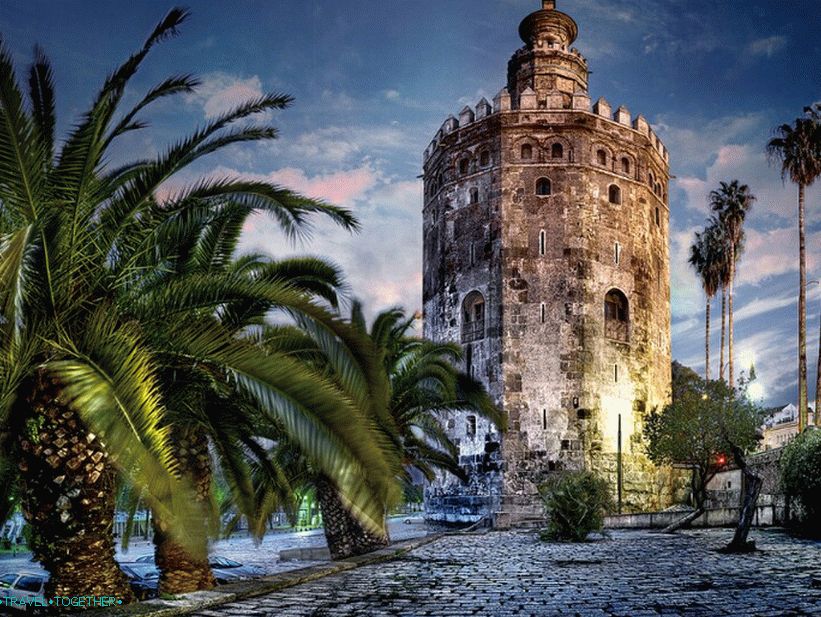 Torre del Oro (Golden Tower) – one of the most recognizable attractions of Seville, located by the Guadalquivir River. It was built in the 13th century during the reign of the kings of Taif, when Spain was conquered by the Moors. Currently in the walls Torre del Oro is located Naval Museum. Among the things which you can see – old nautical charts, ship models, navigation tools and historical documents. The museum demonstrates the history of the fleet of Seville and the Spanish maritime stories. Plaza of Spain is one of the most impressive plazas of Seville. It has the shape of an ellipse, a diameter of 200 m and an area of ​​about 50,000 square meters. In its architecture stands a huge semicircular Renaissance building with balustrades. Also on The square is a monumental fountain. Highlight square is the channel. Because of him, this place is often called Seville Venice Here is located Parc de Maria-Louise. 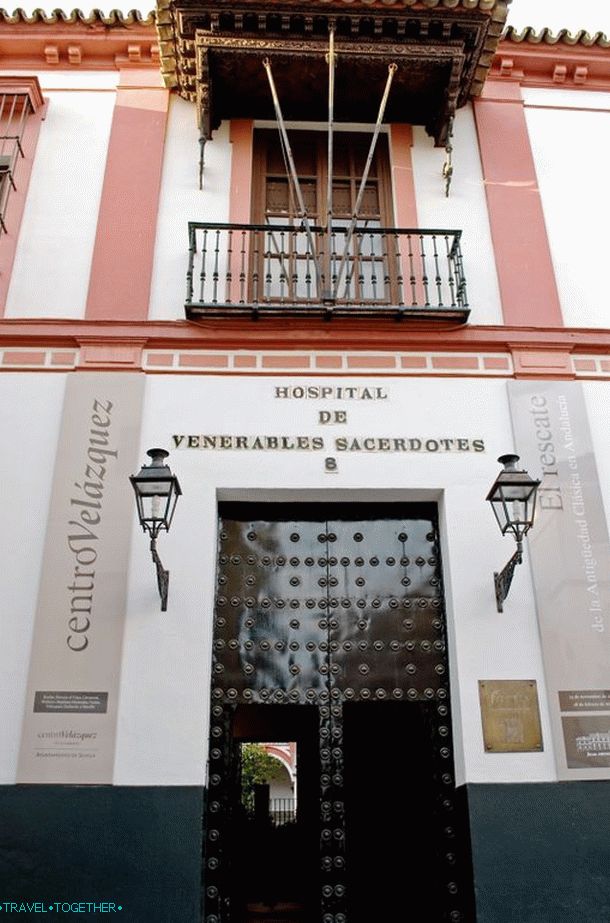 De Los Venerables – a historic former hospital building in the area Barrio de Santa Cruz. This two-story building of the 17th century is a classic example of the baroque style prevailing at that time Seville Inside is a small courtyard and pretty chapel. Barrio Santa Cruz – one of the most charming neighborhoods Seville with old-fashioned charm. In the Middle Ages here was Jewish quarter. Most of the local churches are former synagogues. This medieval area is characterized by a paved labyrinth cobblestone lanes (too narrow for cars) with orange trees, pretty houses with attractive courtyards, small cozy squares and open cafes. Arena for battle the bulls

The Mestranza Bull Ring is one of the largest arenas for bullfighting in Spain. Holds 14,000 spectators. Was built at 18 century. 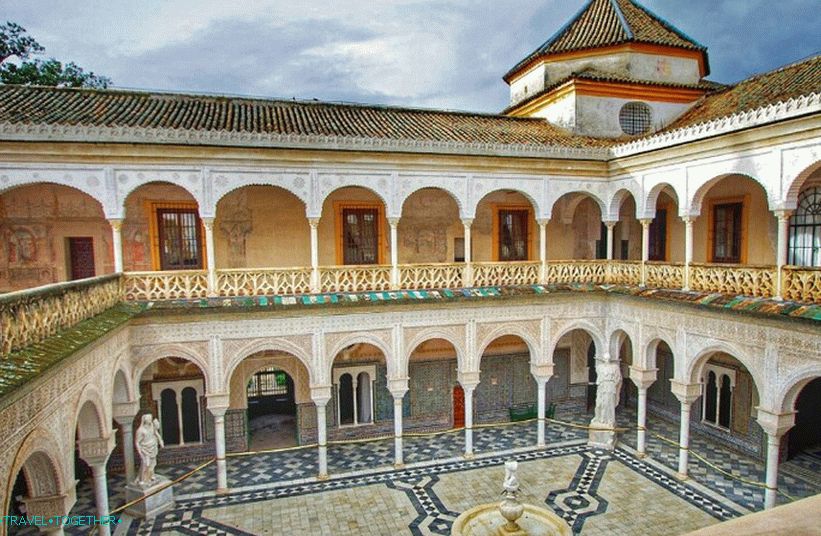 Pilate House is a historic building of the 16th century. It is considered a copy of the house Pilate in Jerusalem. Combines mudejar, gothic and Renaissance. The small patio has a fountain and is decorated. colorful tiles. Barrio de Triana – historic quarter of Seville with atmospheric streets and squares. This is a traditional artisan quarter. AT in the area of ​​Triana you can find colorful ceramics and cute cafes with river view.

Interesting places of the city

Interesting places of Seville that are worth seeing and to visit.

Seville on the map of Spain