Santiago de Compostela – a city in the west of Spain, the capital Autonomous Community of Galicia. Is a famous place Christian pilgrimage thanks to the relics of the Apostle James, which in Spain is known as Santiago. In the Middle Ages Santiago de Compostela in its significance for the Christian world was equal to Jerusalem and Rome. The historic center is an object World Heritage Site and is a weave of vintage streets and architectural styles, which are romance, Gothic and Baroque churches. In the center of Santiago de Compostela the magnificent cathedral is located which is one of the most outstanding masterpieces of sacred architecture in Spain.

Santiago de Compostela is located near the geographical the center of Galicia, the northernmost and western region of Spain. City located on the river Sar. The average height above sea level is 260 meters. The climate is oceanic. Summer is warm and rather dry. Winter – soft and rainy. Santiago de Compostela – one of the most rainy cities of spain. Average annual rainfall makes more than 1500 mm. Negative temperatures are seldom.

The best time to visit is May-September. The rest of the time it rains here very often.

It is believed that the first settlement on the site of Santiago de Compostela It was founded by the Suebi tribe around the 4th century BC. Later This territory belonged to the Romans. In the 6th century, after the collapse of the mighty Roman Empire, the city along with the rest of Galicia and Northern Portugal was included in the kingdom of the Visigoths. From 711 to 739 years the territory of Galicia belonged to the Moors. In 754 the city was included in Kingdom of Asturias.

According to legend, the relics of the Apostle James are buried in the cathedral. Santiago de Compostela was considered one of the main shrines Christian world and the center of pilgrimage. The city was the ultimate the point of “the way of St. James”, which covered most of Europe.

An interesting legend is the discovery of the relics of St. Jacob … the Apostle accepted martyrdom in 44 AD. His remains were placed in a boat and sent on a journey through the waters of the Mediterranean. By some miracle, the boat was washed ashore at the mouth of the river Ulya in Spain At the beginning of the 9th century, the hermit Pelayo discovered an ark with the relics that remained incorrupt. Later built here a small church. At the end of the 10th century, Al-Mansur invaded Galicia. Destroying everything in his path, he spared the relics of the saint. Al Mansour commanded to demolish the cathedral. Bells and doors were carried on shoulders. Christians to Cordoba. Of them were cast lamps for the mosque. Opponents of the legend believe that the remains belong to the philosopher and to the former Bishop Avila Priscillian. 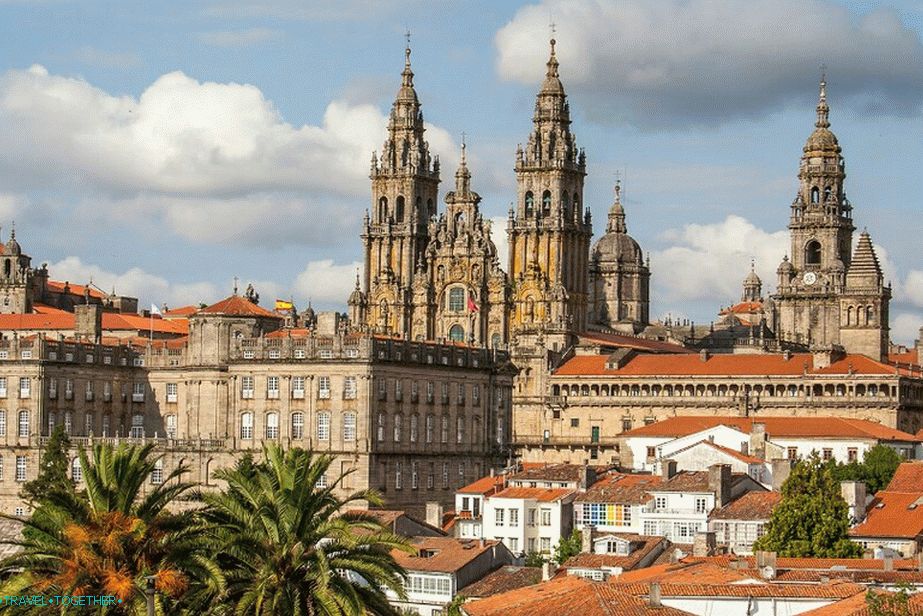 View of the cathedral

At the end of the 10th century, the city was taken by al-Mansur, who completely ruined. The first time Santiago de Compostela developed as a religious center. In the 19th century was captured by the French. AT currently Santiago de Compostela is one of the largest and most important cities of Galicia. More than 30 students study at the local university. thousands of students.

The airport is located about 10 km from the city. Main Directions: Rome, Milan, Amsterdam, Brussels, London, Paris, Munich, Frankfurt. The city center can be reached by bus or Taxi.

Regular train and bus service is available from most cities of Andalusia, Madrid, Barcelona, ​​some cities of Portugal and France. The city is a very important center for pilgrims. Here you can find all kinds of souvenirs related to religious themes. Typical stores are located in Zona Nova. In Santiago de Compostela There are two shopping centers: Área Central in the Fontiñas area and Hipercor at Rúa do Restollal. 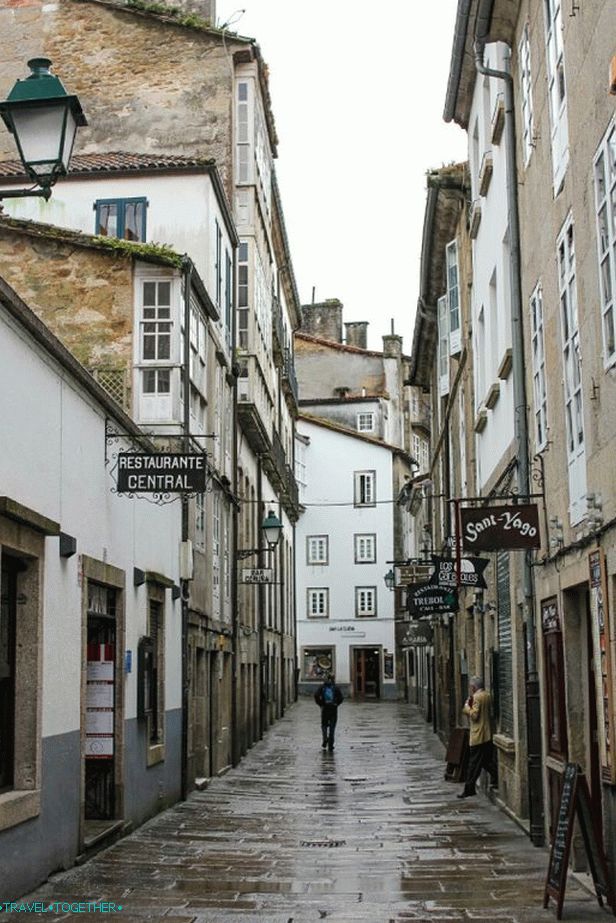 The main attractions of Santiago de Compostela are a grand cathedral and many ancient sacral structures. The Cathedral is the most prominent building in the Romanesque style. Spain and one of the most beautiful religious buildings in the world. Cathedral was built between 1075 and 1211 on the site of an earlier church the ninth century, which was destroyed by Al-Mansur. Building on Throughout its history, the restoration took place several times. acquiring architectural styles from gothic to renaissance. Sure to It is worth paying attention to the entrance portal. It was created in the 12th century and contains about 200 sculptures of religious subjects.

Inside the cathedral is a grand three-nave space with a striking area of ​​about 8,300 square meters. Interior contains valuable works of art. Right under the rich baroque the main altar is a crypt in which it is believed The relics of the apostle James rest. In the first chapel in the south aisle there are tombs of kings and queens of the XII-XV centuries. Over the south the transept, to the right of Puerta de las Platerias, is located magnificent cloister in the style of platèresco, which dates from 16 century and is one of the largest in Spain. Hostal de los Reyes Católicos is a great example of Gothic plateresque with a decorative facade and four courtyards. This building was built by Catholic monks to shelter the weary. pilgrims.

Plateresco is an architectural style in Spain that is kind of renaissance. 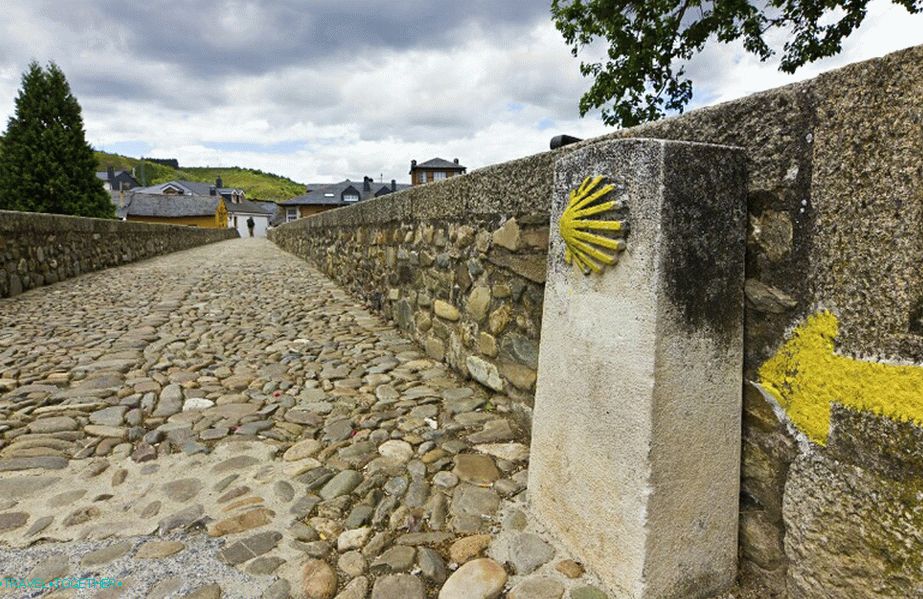 Way of sv. Jacob or Camino de Santiago – ancient trail pilgrims, which crosses most of Europe. The origins of this route go back to the 9th century, and at its key points built magnificent romance churches. The end point of the path is Santiago de Compostela. The symbol of this medieval route is a seashell. 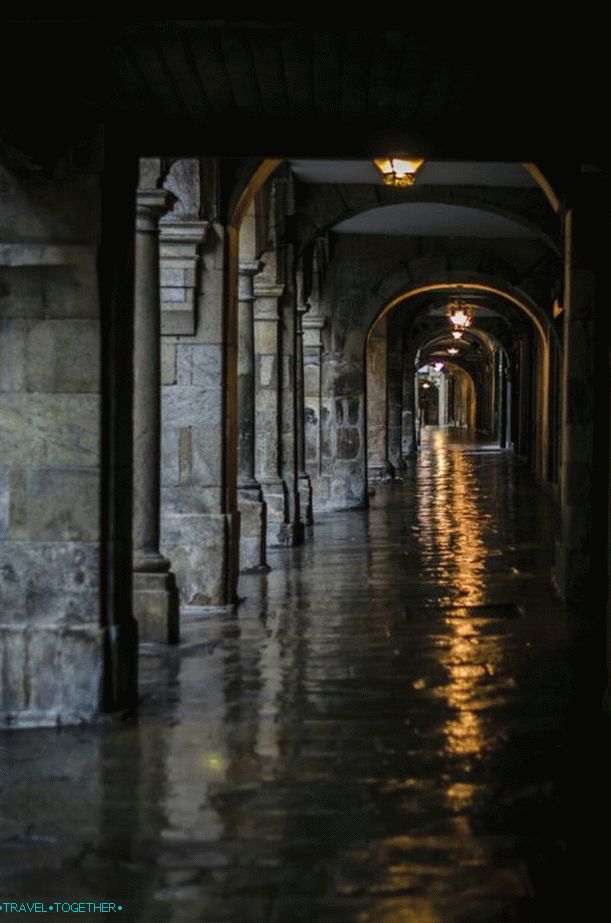 The whole old city of Santiago de Compostela is an object UNESCO World Heritage Site. This is an atmospheric maze of old narrow Streets, buildings and ancient churches, located south of cathedral. Santa Maria de Sar – an ancient monastic church in Romanesque style that dates back to the 12th century. She represents three-nave building, divided by arcade columns. Vaulted arch with ribbed arches creates a feeling of spaciousness. The church has small courtyard with garden.

The Cabildo Palace is one of the finest examples of baroque architecture in region of Galicia. The building was built in the 18th century. San Martinho Pinario is a monastery of the 15th century with the church of the same name. It was founded by Benedictine monks. Is a great example spanish baroque. The church is famous for its magnificent baroque altar Casas work. The House de Fonseca is a 16th century historical building that belonged to the family of Archbishop Alonso de Fonseca. This influential a man in the middle of the 16th century opened a school here, on the basis of which later the university began to function. The building has a renaissance facade and interesting gothic elements. Now here is located university library. 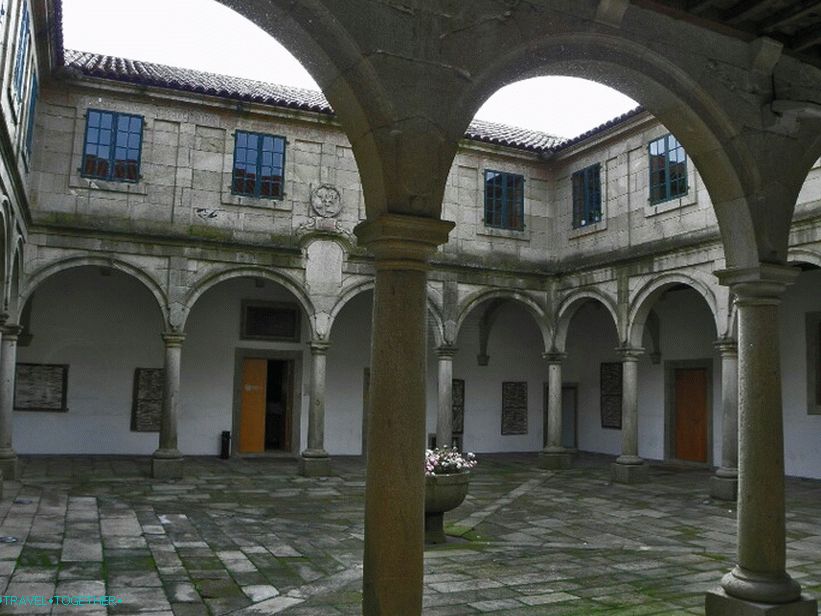 San Roque is a former hospital and church that dates from 16 century. The hospital was built for the treatment of patients with plague. The building has a rectangular layout and the original facade of the 16th century. in the Renaissance style. Next to the hospital is the baroque church San Roque. It houses one of the most important work altars. Simone Rodriguez. Carme – a strict baroque monastery of the 18th century. San Domingos de Bonaval – an ancient monastery complex, founded in 1220, the national monument of Spain. Modern The building of the monastery dates back to the 14th century. Currently here is the museum of Galicia. One of its most interesting features. – Triple Domingo de Andrade spiral staircase.

The church of San Domingos de Bonaval was built in the 14th century in Gothic style with a significant Romanesque influence. Three-nave building divided by semicircular arches. Inside is four gothic tombs on both sides of the altar and a stone gothic cross. The University Church is a 17th century baroque church founded Jesuits. After the expulsion of the order from Spain became a chapel university. There is a large baroque altar in it. San Francisco – Franciscan monastery, founded in the 13th century. All that remains of the original building is five gothic arches. The modern baroque church was built in 18 century. 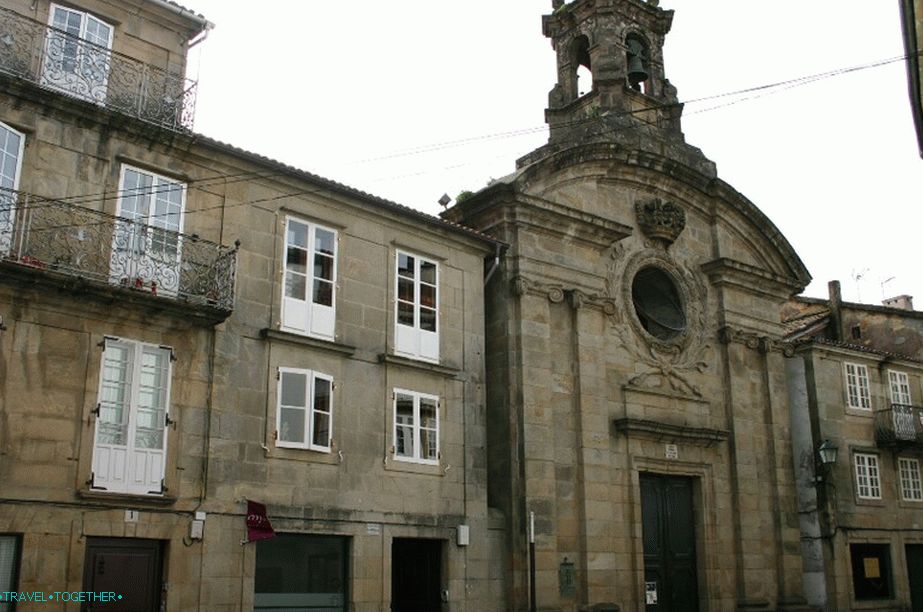 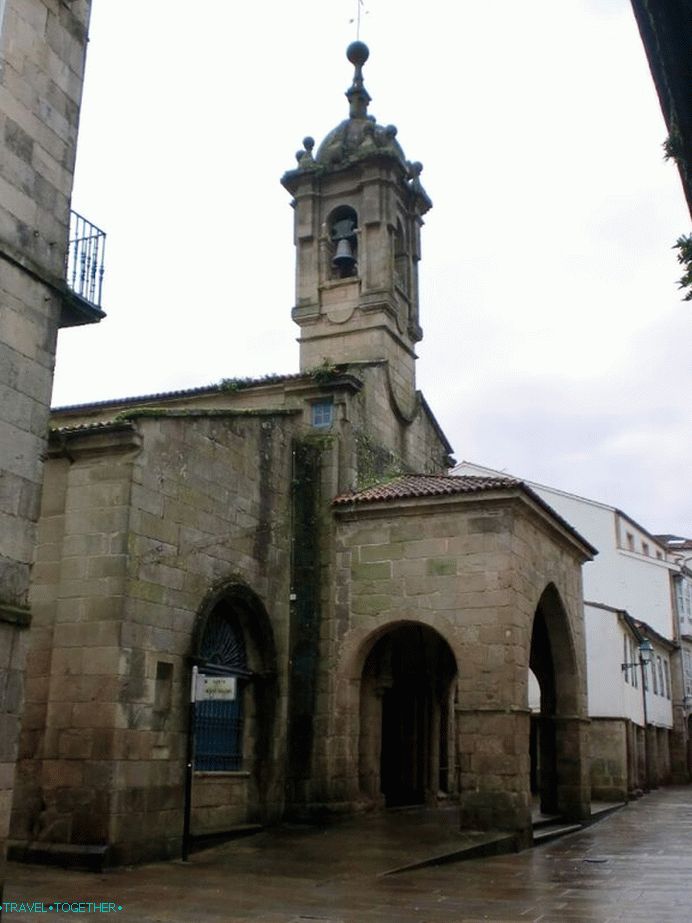 Santa Maria Salome is an ancient sacral structure founded in 12th century. All that remains of the original building is the facade and few details. Baroque tower built in the 18th century. San Fructuoso is a beautiful baroque church that belongs to 18th century. The facade is decorated with many interesting sculptures. The gothic house is a historic building of the 14th century, in which The administration of the pilgrimage museum is located. Map of the historic center with routes Map of the city

Santiago de Compostela on a map of Spain