Salamanca (Spain) – detailed information about the city with a photo. The main attractions of Salamanca with a description, guides and maps.

Salamanca – a city in the north-west of Spain in the autonomous The community of Castile and Leon. This is a place of exceptional beauty with almost magical atmosphere and, literally, an open-air museum, declared by UNESCO World Heritage Site. Salamanca is famous university city that has been famous since Middle Ages, when he attracted students from all over Europe. Follow in the footsteps of the greatest philosophers, scientists, writers and artists of Spain to discover the richest cultural and historical heritage: from the halls of the ancient university to old cathedrals and monasteries, charming medieval streets and quiet squares.

Salamanca is considered one of the most impressive cities of the era Renaissance in Europe. Many buildings are built of sandstone, which mined in a career near the town of Villamayor. At sunset they begin sparkle gold and pink. That is why Salamanca is sometimes called La Dorada, which means “golden city”. University was founded in 1218 and is one of the oldest in the world. Dad Roman Alexander IV once called him “one of the four leading the lights of the world. ”

Salamanca is located in the west of Spain on a plateau 212 km from Madrid The city is crossed by the river Tormes. Climate – transitional between Mediterranean and semiarid. Summer is dry and hot. Winter cool with little frosts. 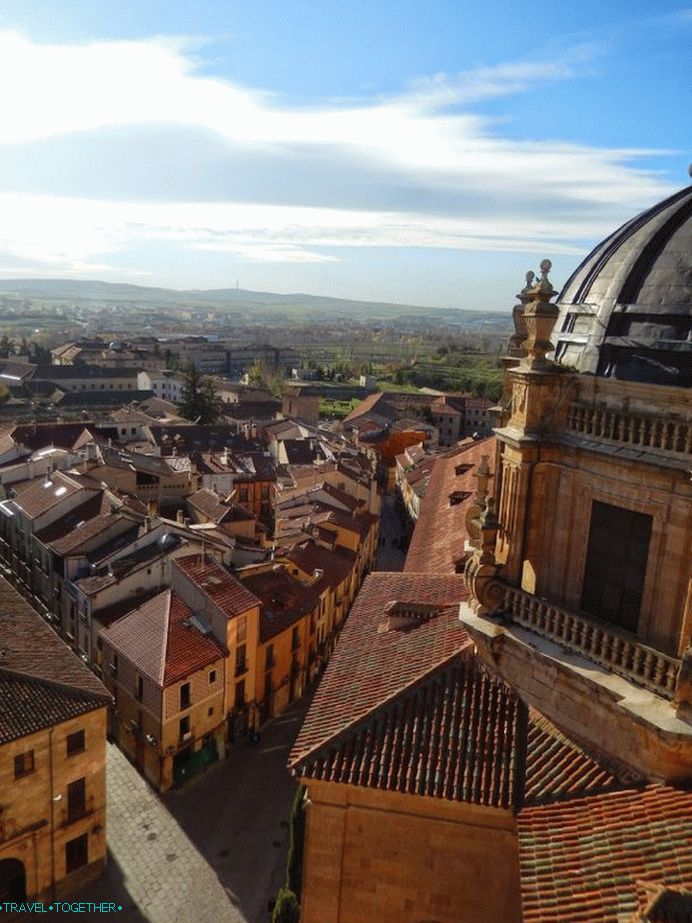 The best time to visit is from April to October.

Salamanca is a very ancient city. Even before joining the Iberian the peninsula of the Romans here existed a settlement of Iberians and Vaccais. At that time, the city was called Gelmantik. Under the Romans here there was a crossing over the river Tormes. After the collapse of the Roman Empire these territories belonged to the Visigoths. When the Visigoths in Salamanca was a bishopric.

From 7-11 century, the city belonged to the Arabs. Salamanca was conquered the Spaniards during the Reconquista in 1087-1102. By the end of the 12th century Salamanca was the second city of the kingdom of Leon and even had special privilege. At the beginning of the 13th century a university was founded here. Salamanca reached its heyday in the 16th century. In the 17th century the value of the city slowly began to fall. Now salamanca important cultural and educational center of Spain, which has retained its historical appearance and sights. 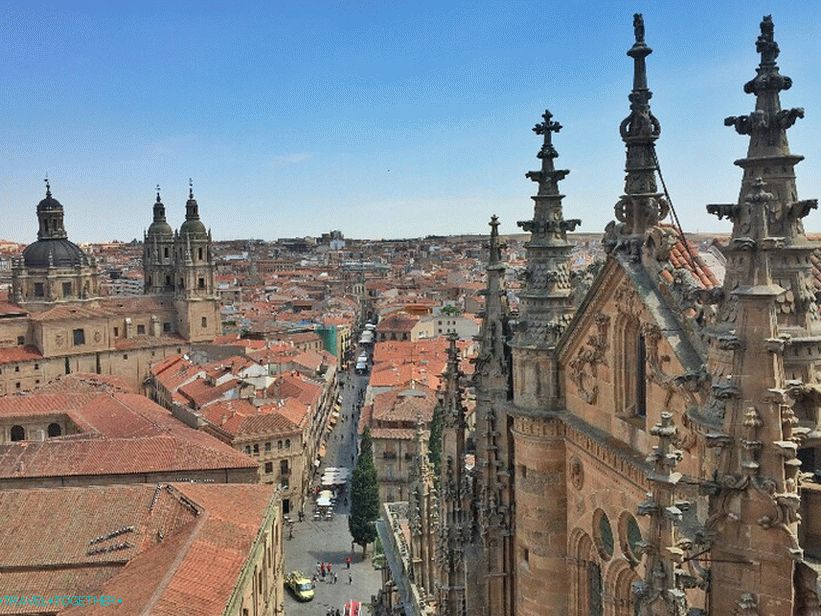 Despite the fact that Salamanca has its own small airport, it almost does not take regular flights. Best and The cheapest way to get here is Madrid Airport. The city has regular bus and train service to the capital Spain Every day, four speed trains to and from Salamanca trains and five regular ones. Also here the train stops at Route Madrid-Lisbon.

Salamanca can offer good shopping. Here you can find both traditional family stores and national and international brands. Calle Toro, northwest of Plaza Mayor, is one of the main shopping areas. In Salamanca there is several shopping centers, but you can reach them by car or bus ride. Most stores open at about 10am, close for two to three hours during lunch (siesta) and beyond remain open until 21:00. On Sunday many shops are not work. In Salamanca you can find tasty and inexpensive food. On almost every The street is a small restaurant with excellent tapas. Dinner usually served from one o’clock to three o’clock in the afternoon, dinner – from 8 to 11 evenings Locals mostly gather north of the center. cities. Popular tapas are any kind of pork: ribs (Costilla), sausage (chorizo), ham (jamon). From local products Iberian ham is famous. 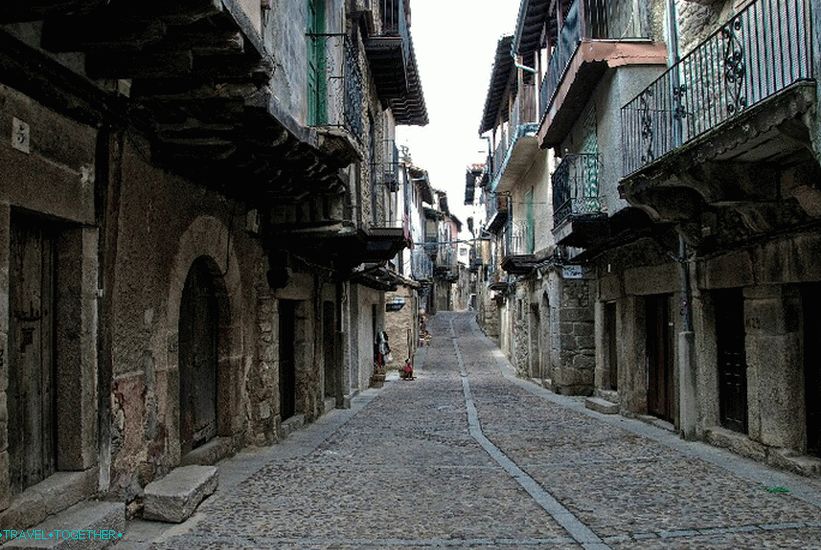 In the historic center of Salamanca you can find many attractions: from the oldest university in Spain to old cathedrals and monasteries. 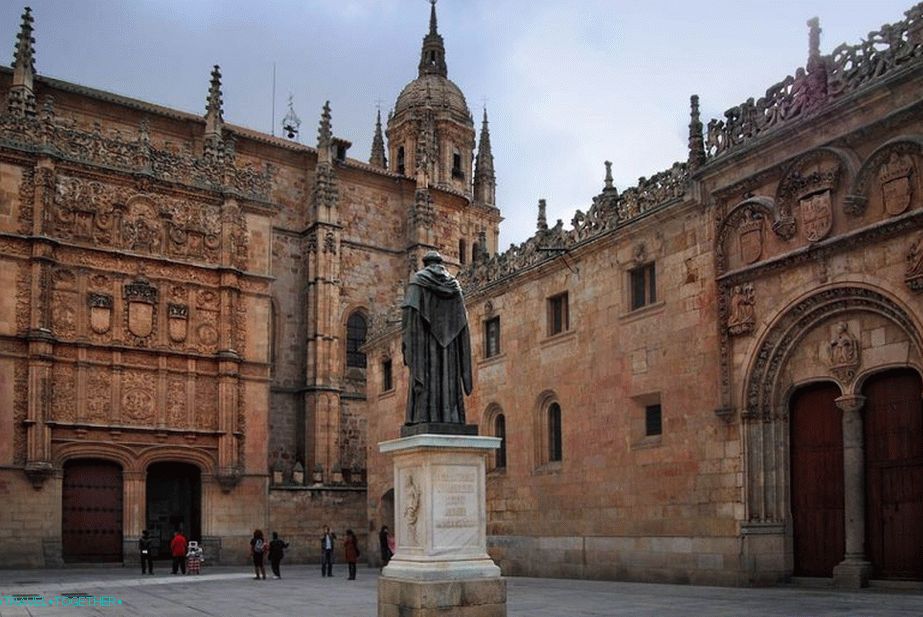 The University of Salamanca is the oldest university in Spain and one of most ancient educational institutions of Europe. It was founded in 1218 and The Middle Ages was considered one of the centers of European science on a par with Universities of Bologna, Paris and Oxford. Here he studied the famous Cervantes, and the heliocentric system of the world of Copernicus was recognized before official approval by the church. The existing building was built between 1415 and 1433 years. Most interesting of it The feature is a fancy platresque style facade, which refers to the year 1534. The frog figurine (if found) brings good luck

Hint: you need to look for a frog on the right pilaster (vertical overhang) above the skull. 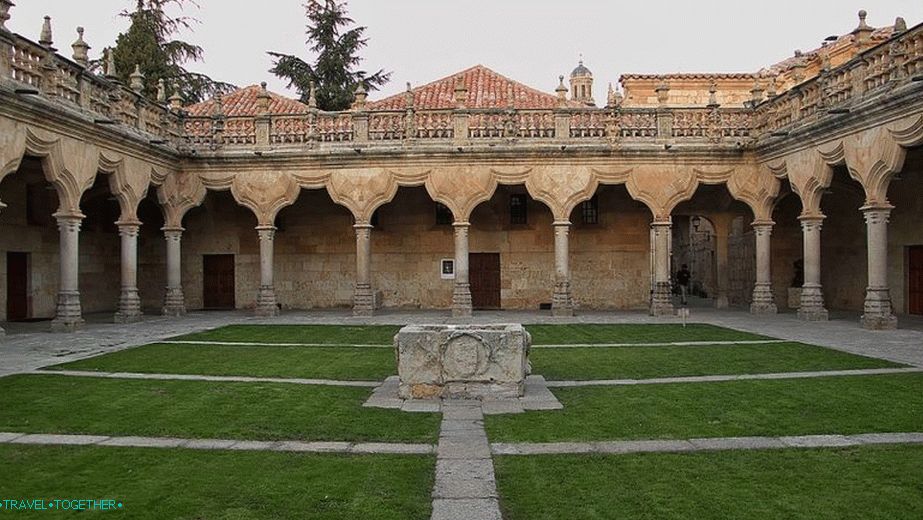 Patio de Esculazas – this magnificent courtyard, decorated with elegant Renaissance and Baroque buildings, has the characteristic atmosphere of Salamanca. It includes a university building, university preparatory buildings and former hostel for poor students. Also here is the city’s museum, which includes collections from religious altars, paintings, sculptures and Flemish tapestries to archaeological finds and products from precious metals. Old Cathedral or Catedral Vieja de Santa Maria de la Sede – the oldest Christian church of salamanca. The cathedral was built between 1100 and 1200. It is a masterpiece of the Romanesque style and one of the most impressive. buildings of this architectural period in Spain. Although the Old Cathedral is not as grandiose as New, it has its own special beauty and atmosphere antiquities and tranquility. Among the original romance elements are Chapel de Talavera in the style of Mudejar with Alonso sculptures Berrugate In the main apse are 53 scenes from the life of Christ and Virgin, written by different artists. In the arches is 15th century fresco by Nicolas Florentino’s Last Judgment. The cathedral also contains beautiful tombs of bishops and aristocrats. Other interesting architectural feature of the Old Cathedral – Torre Tower del Gallo, named after the figure of the cock that crowns her.

New Cathedral – a grand religious building, construction which was begun in the 16th century and completed only in the 18th century. Due to this, three architectural styles adjoin the building at once: Gothic, Baroque and Plateresco. This church towers on a hill and eclipses with its size the old cathedral. The building has impressive dimensions: 104 meters long and 48 meters wide. Tower The cathedral has a height of 110 meters and a beautiful dome. Domed the sanctuary rises to a height of 38 meters. In the baroque choir depicts the image of the Virgin de Loreto. Inside the cathedral are masterpieces religious art. 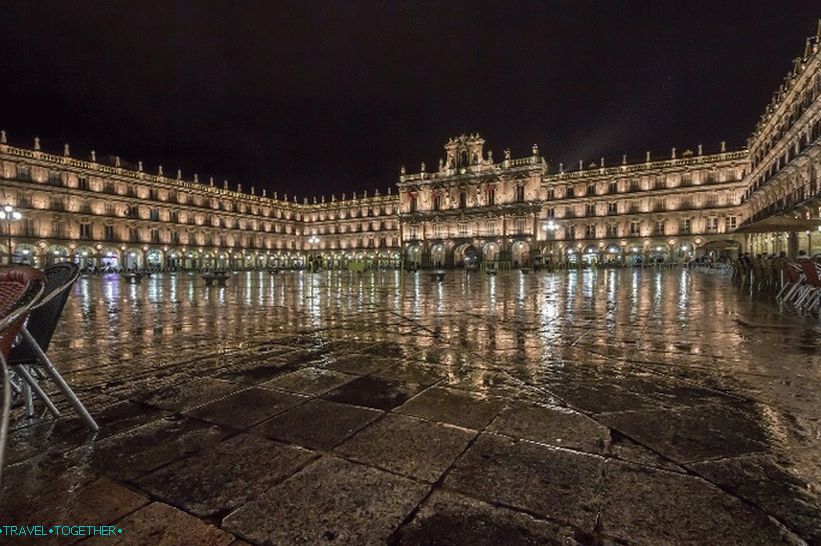 Mayor is a beautiful square in the historic center of Salamanca. Considered one of the largest urban areas in Spain. It is decorated with historical three-storey arcade buildings of the 17-18th century. in a single architectural style. Historically, the Plas The major served as the center of city life throughout its history, as well as a place for bullfighting up until the 19th century. Under arcades there are many cafes and restaurants that makes the area especially busy in the evening. In the southwest corner is beautiful Palace in the style of the Renaissance 16th century. Casa de las Conchas – a 15th century palace in Renaissance style, Maldonado – Knight of the Order of St. Santiago. Most a remarkable feature of the palace is the facade decorated hundreds of sea shells – a symbol of medieval pilgrims walking on the way of sv. Jacob in Santiago de Compostela. Depending on the time of day sunlight creates interesting effects on the facade. Also noteworthy is the Gothic coat of arms over the front door and intricate forged bars on the windows. Now in the building The library is located. 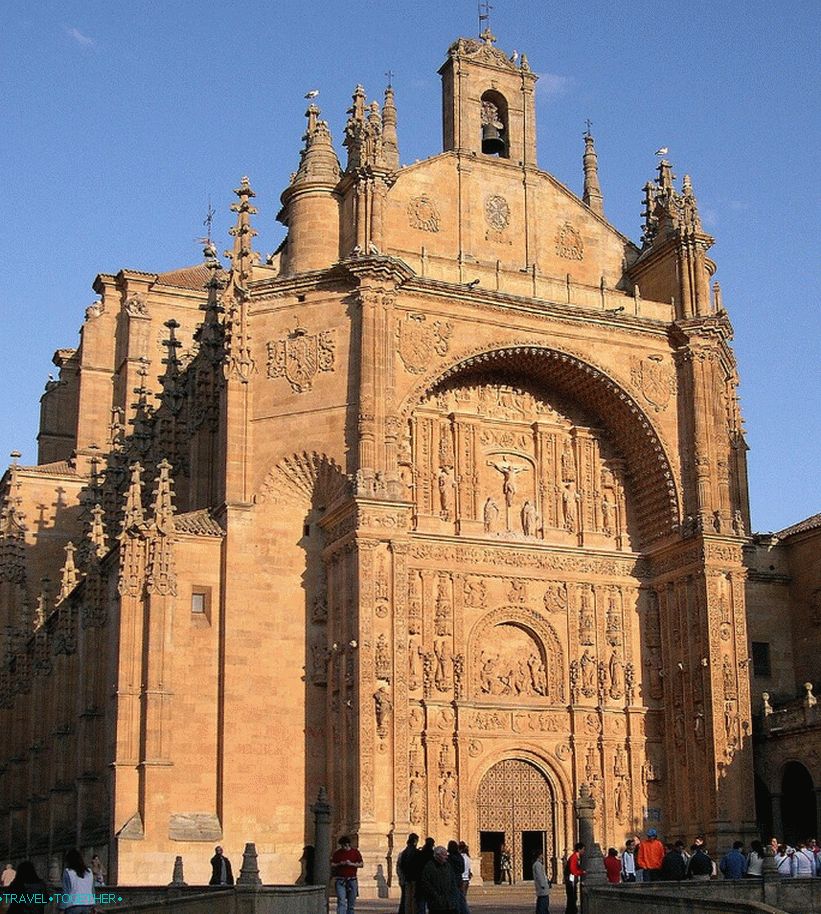 San Esteban – Dominican monastery with a magnificent church, built between 1524 and 1610 years. The main features of this Structures is a stunning facade in the style of Plateresque and the gilded main altar of 1693, José de Churriguera, who considered one of the greatest works of the sculptor. 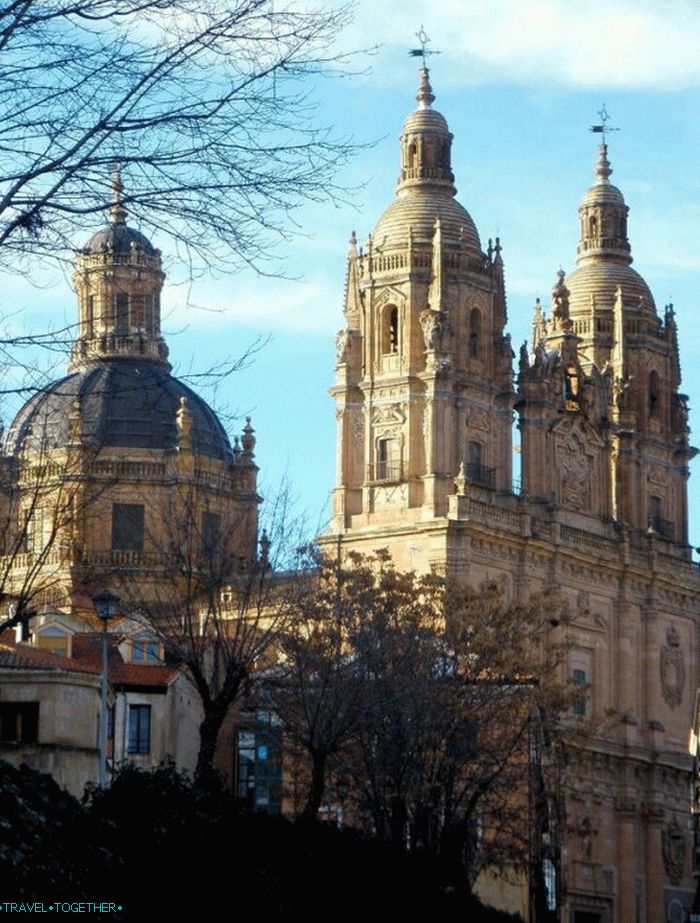 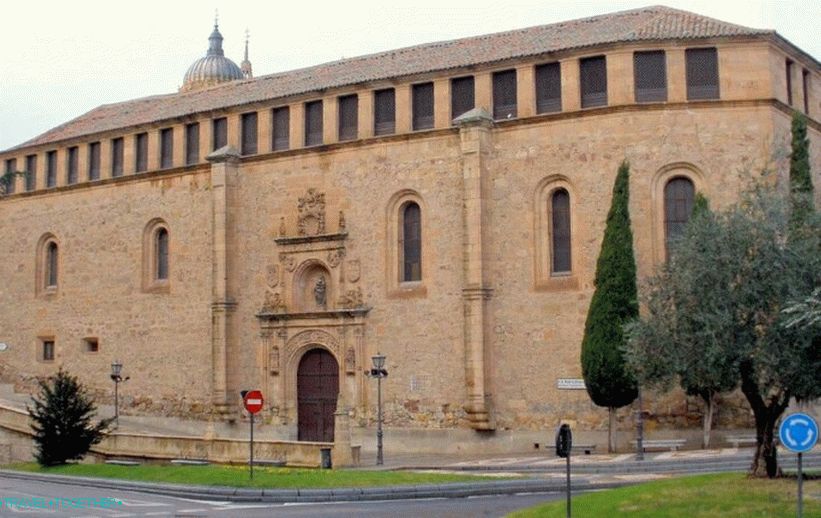 Las Dueñas – 15th century female Dominican monastery, interesting example of Mudejar architecture. One of his most interesting features is a two-story Renaissance building, which has capitals depicting terrible beasts and human figures that seem inspired by the “Divine Comedy” Dante. By the way, nuns still live in the monastery. Las Ursulas – a monastery built in the 16th century for the order Ursulines It is a Gothic building with vaulted ceiling. The monastery is a wonderful Archbishop Alonso Fonseca’s marble tomb, a sculptor’s masterpiece Diego de Siloe. The sarcophagus of Francis Rivas is located in the nave. was the archbishop’s butler. The interior is an interesting mix of Italian and Mudejar decorative styles. The choir has a magnificent caisson ceiling and altar of the XVI century.

Salamanca on a map of Spain