Rovinj (Croatia) – the most detailed information about the city with photos. The main attractions of Rovinj with a description, guides and cards.

Rovinj is a small seaside town in western Croatia. Located on the Adriatic coast of the Istrian peninsula. Rovinj – one of the most picturesque and charming cities of the Mediterranean, which enchants with Venetian architecture and the maze of narrow streets, red-tiled roofs and old buildings, great atmosphere and stunning sunsets. Its historical the center is located on an island that was connected to the mainland only in the 18th century.

Rovinj in an interesting way combines rich traditions and modernity, provincial charm and resort status. This town It is still a fishing port, so seafood is the most fresh and tasty. The core of the old city mainly refers to Venetian period. Most of the old buildings are built from pale limestone that looks amazing at dawn and sunset 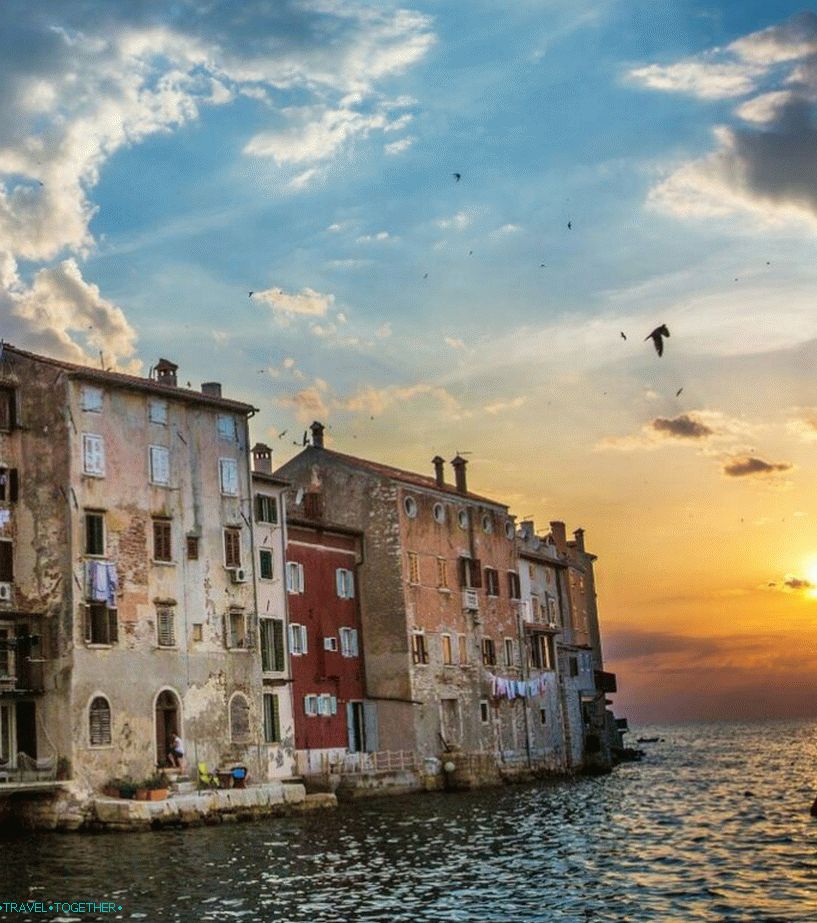 The city of Rovinj is located in the western part of Istria. Historical the center lies on a peninsula that literally crashes into the sea. Nearby are several dozen picturesque islands. Climate – Mediterranean (humid subtropical). Summer is very warm, winter wet and soft. Water temperature in the summer of 22-25 degrees. Tall Season – July and August. 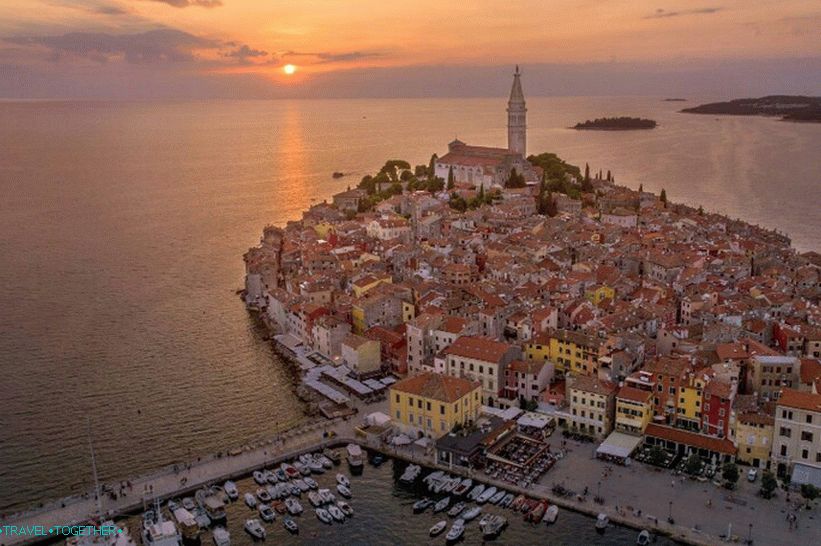 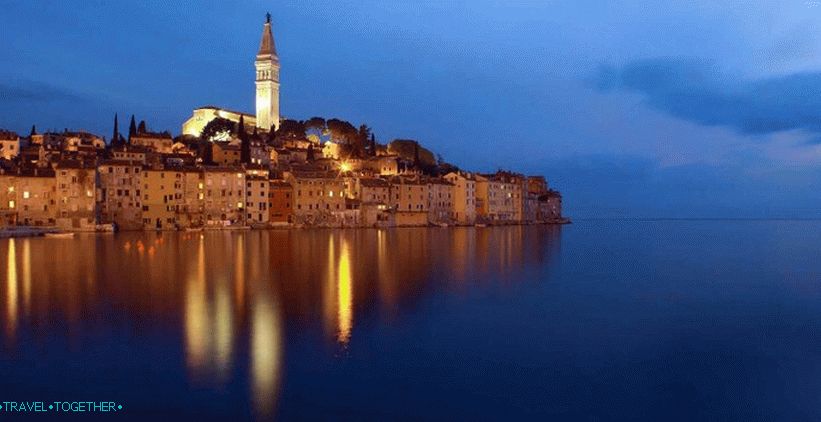 The emergence of a settlement on the site of present-day Rovinj dates from 3-5 century of our era. The first written mention of the city belong to the 7th century. At this time, Rovinj was part of Byzantium, and later exarchate of Ravenna. In the 8th century, the city became part of the empire. francs.

In 1238, Rovinj, Porec and Umag were part of the Venetian of the republic. Under the rule of Venice, the city turned into a major Istrian shopping center. In 1379, Rovinj was for some time conquered by Genoa. 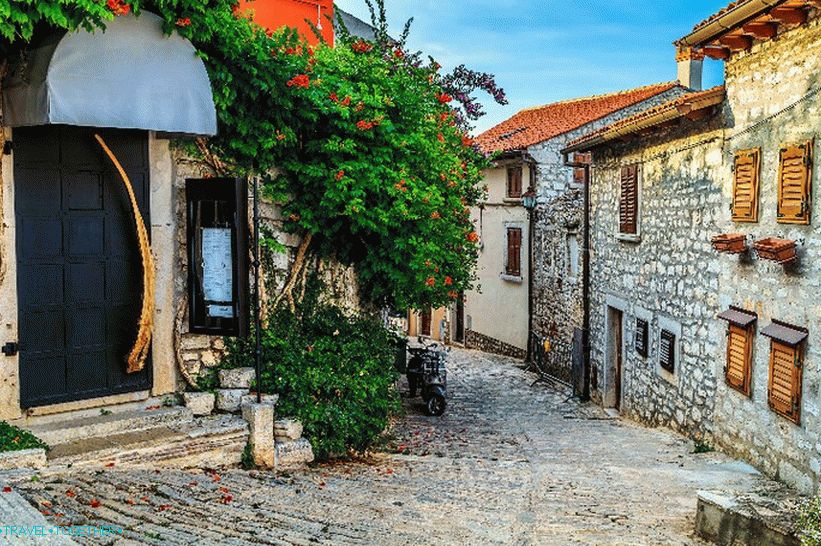 After the fall of the Venetian Republic at the end of the 18th century and invasion of Napoleon, Rovinj became part of the Austrian Empire. After the collapse of Austria-Hungary, the city falls under the Italian influence. After World War II, Istria comes first. Yugoslavia, and in 1991 becomes part of an independent Croatia

The nearest airport is in Pula, about 40 km away. More The largest airport is Venice. With Pula Rovinj connected regular bus service. To Venice regularly go ferries

How to get there by car: 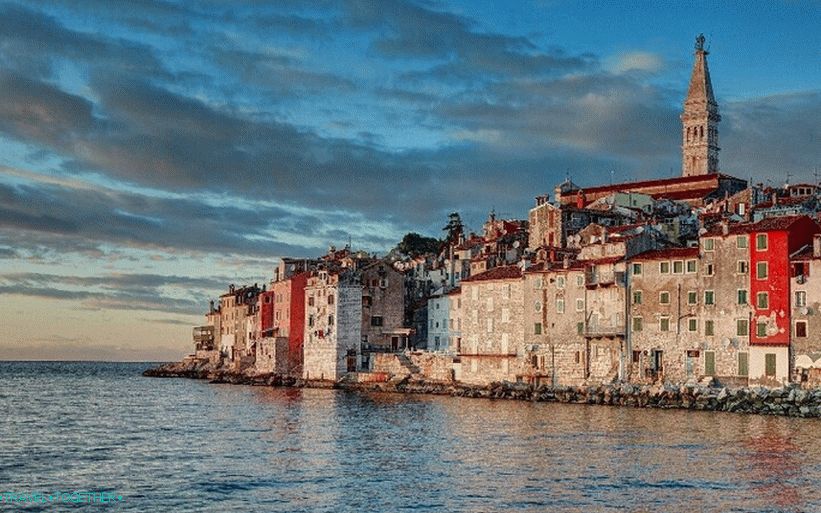 Istria – one of the best gastronomic regions The Mediterranean. Here you can taste delicious dishes. Mediterranean and Italian cuisine incl. from local seafood, truffles and asparagus. From traditional products worth buy wine, olive oil and the same truffles. 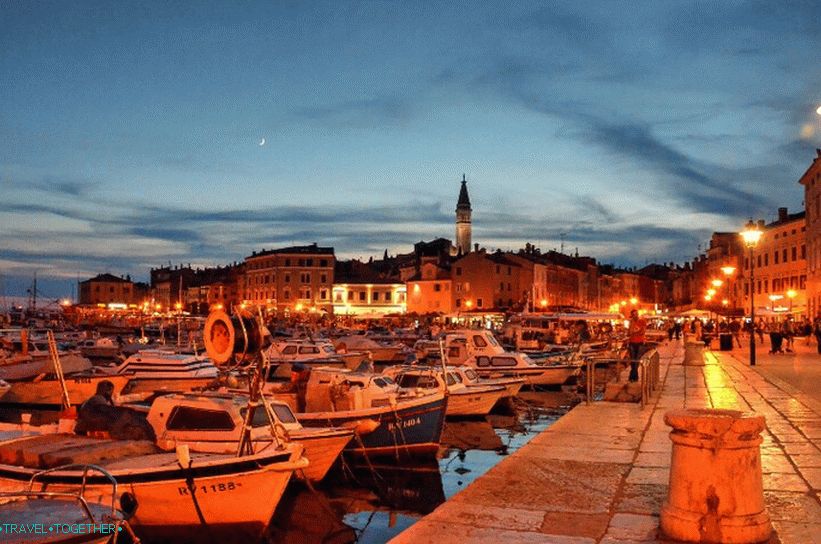 The old town is the main pearl of Rovinj. Historical Center is a medieval tangle of narrow streets and alleys with nice old buildings and small squares. Interesting, what used to be an old town located on an island that in the 18th century connected to the rest of the coast. Once Rovinj was surrounded by walls and had seven city gates. Currently, there are three gates and fragments of medieval fortifications. On the main city square there is a city clock. with a venetian lion and a small fountain. The clock is located on 12th century tower in the southern corner of the former walls. 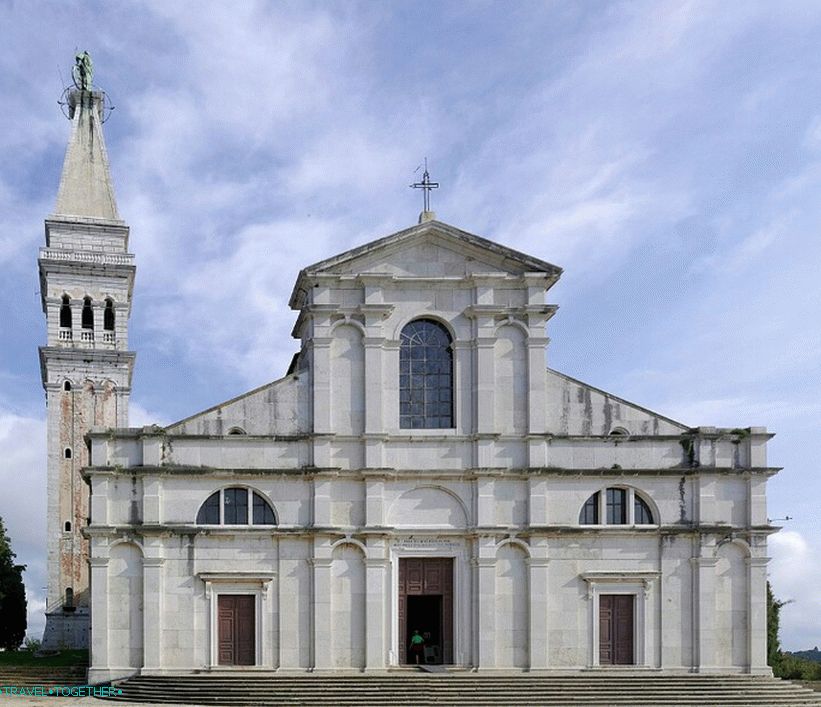 Monkodonja – a bronze age mound on a hill not far from Rovinj Dated back to two millennia BC. 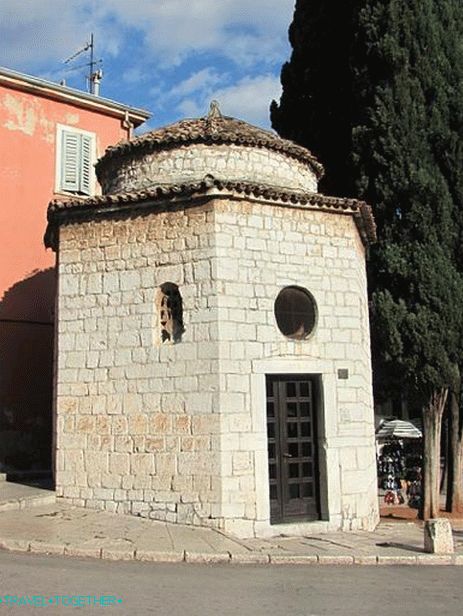 Church of sv. Of the spirit

Church of sv. Spirit – a small Romanesque chapel of the 13th century, located in a small square. Is the oldest structure Rovinj 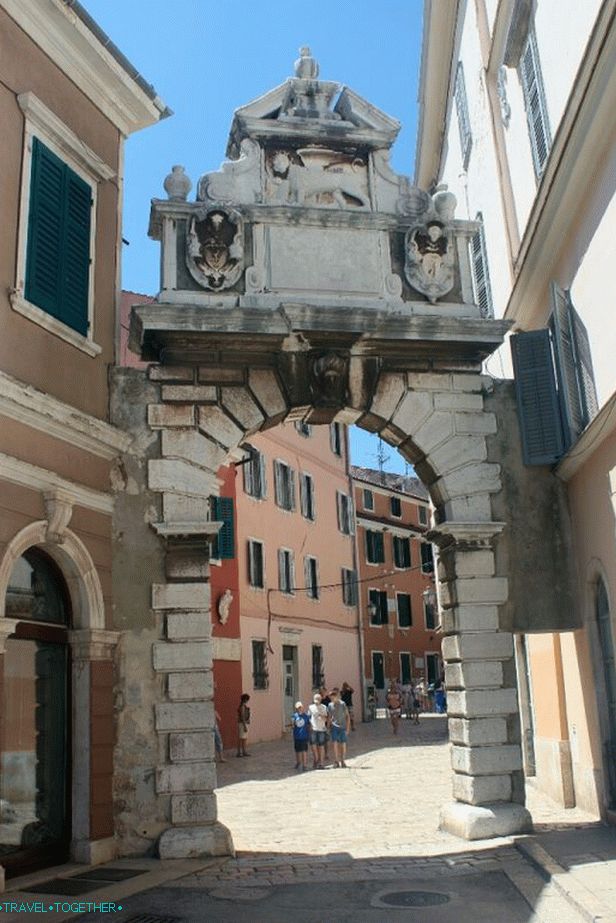 The Balbi Arch was built on the site of the old city gate at 17 century. 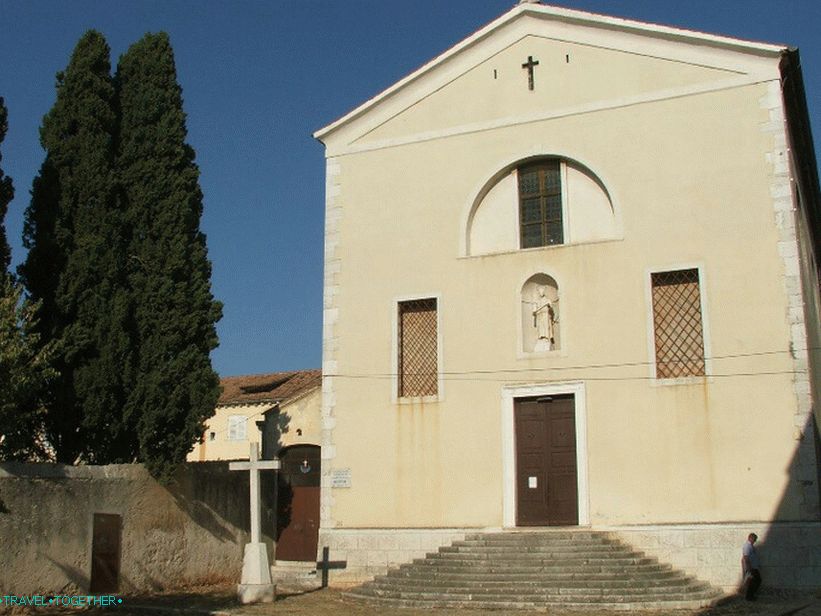 Franciscan Monastery – an ancient building of the 18th century in style baroque. 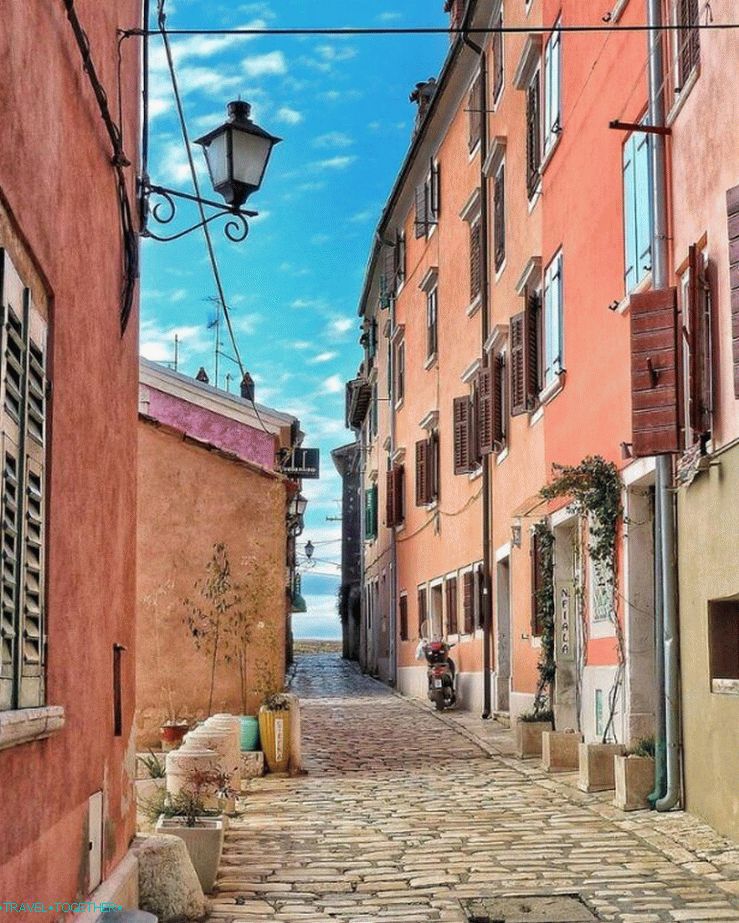 Places of interest near Rovinj that are worth visiting:

Rovinj on a map of Croatia