Roskilde (Denmark) – the most detailed information about the city with photos. The main attractions of Roskilde with a description, guides and cards.

Roskilde is a city in the east of Zeland Island in Denmark. It’s old the capital of the Danish kingdom, located between Copenhagen and Kalundborg. Roskilde is a beautiful ancient city founded the Vikings, which is known for the imposing cathedral, listed as a UNESCO World Heritage Site and being the burial place of the Danish kings, and the museum of ships the Vikings. Roskilde is currently one of the largest university cities of Denmark and ranked tenth population size.

Roskilde is located in northeastern Zealand in the southern part of the same fjord. The city lies on hilly slopes. Distance Copenhagen is about 40 km away. Climate – temperate sea with cool summer and mild winter. 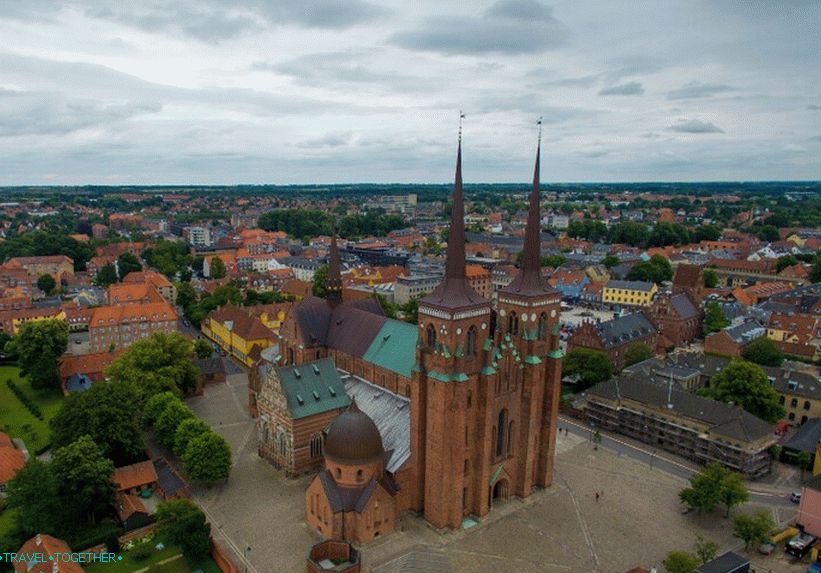 Roskilde is one of the oldest cities in Denmark. It was founded Vikings over a thousand years ago. According to legend, the settlement founded King Harald Bluetooth, who built a wooden church (now in its place is the cathedral) and the royal residence In this church he was buried. By the 12th century Roskilde received the status of a market town and became the residence of the bishop. In that period also began the construction of the cathedral. From the 11th century to 1443 Roskilde was the capital of Denmark.

The bishopric in Roskilde was founded by King Canute. Brick church on the site of the ancient wood was built by Bishop Absalon in 1170 The present cathedral was completed in 1275 year

Roskilde remained the most important city of the Danish kingdom until Reformation. After that, he lost his status, although the cathedral remained the burial place of kings. In the future, war and natural disasters contributed to the decline of the city. New stage of development Roskilde fell on the 19th century when the railway connected it to Copenhagen. At the end of the 19th century, tobacco was built here. factories, iron foundries and machine shops. In 1972 in Roskilde a university was formed. 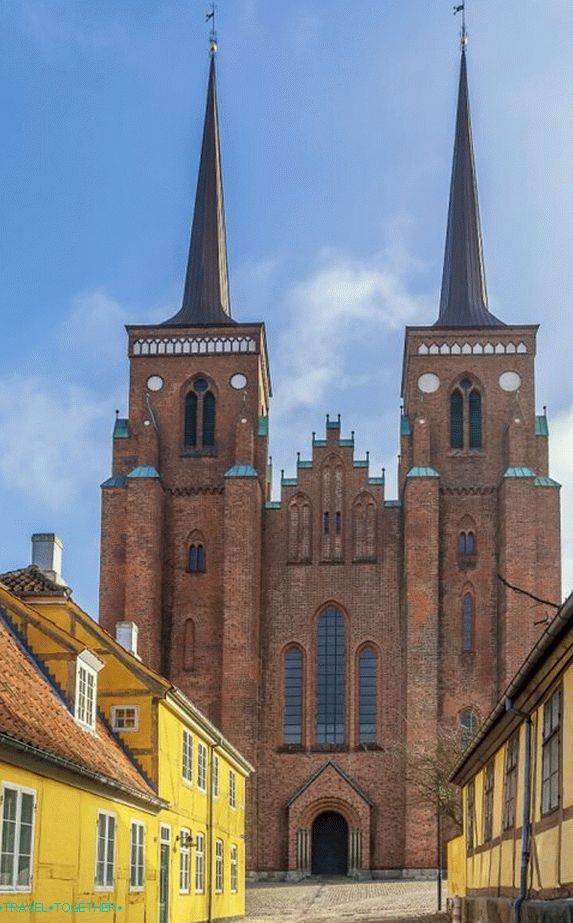 Cathedral of sv. Luke – the magnificent medieval cathedral red brick with impressive high gothic spiers which is included in the list of UNESCO World Heritage sites and considered one of the most important architectural monuments in Denmark. The cathedral was founded by Bishop Absalon in the 12th century and is one of first gothic structures in northern Europe. This building with The beginning of the 15th century is the burial place of the Danish kings. Here 39 monarchs and their families found their last rest. Inside the cathedral you can see magnificent royal tombs, as well as tombs nobles and knights of antiquity. 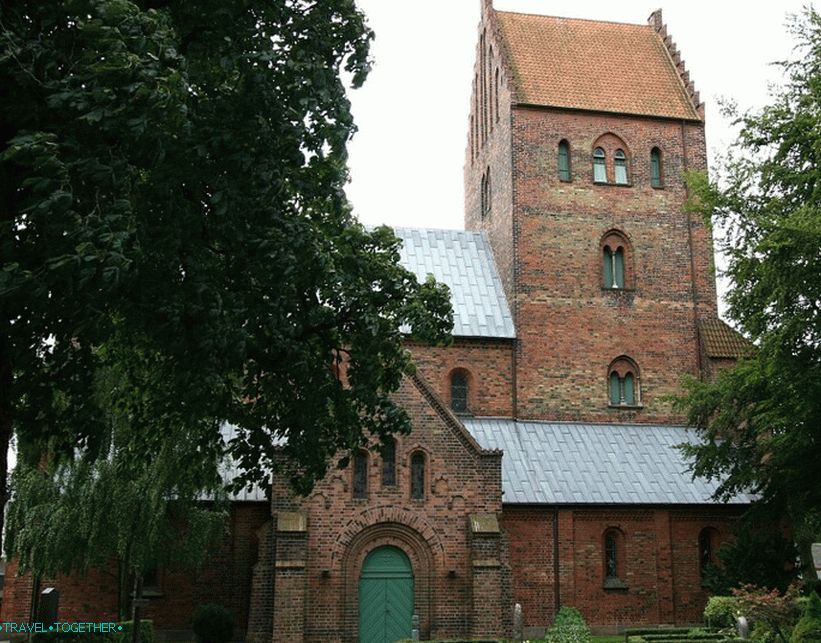 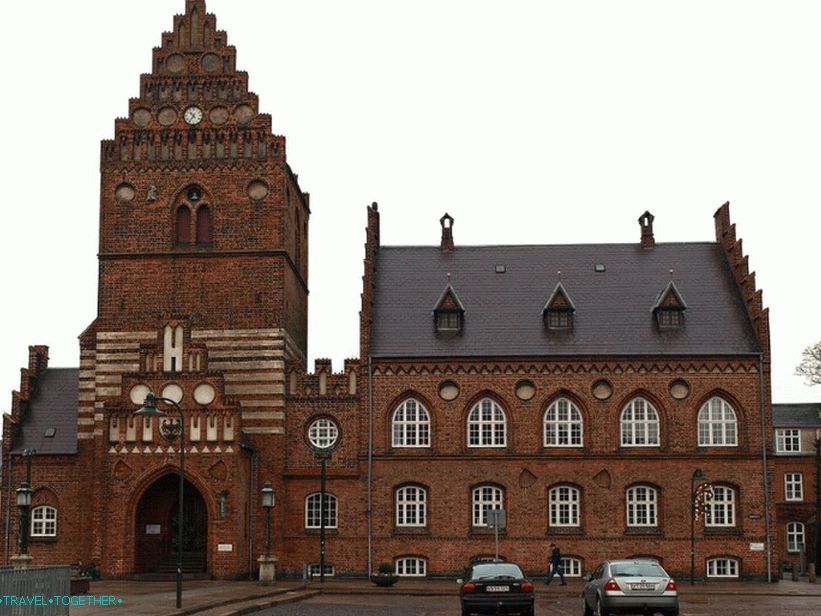 Town Hall – a public building in neo-gothic style in the Market Square (Stændertorvet), built in 1880. Impressive Gothic tower of the early 16th century – all that remains of the old Romanesque church of the 13th century, destroyed after the Reformation. The Viking Ship Museum is one of the most famous museums in Denmark, dedicated to the history of navigation and shipbuilding in ancient and medieval times. The highlight of the museum is the five original Viking ships that were built in the 11th century. Ragnarock is a music museum that tells the story of the development youth cultures and changes in musical styles down to today. The Yellow Palace is a Baroque building built between 1733 and 1736 years on the spot where the vicar’s house once stood. Palace connected by an arch with the cathedral and was the residence royal family. 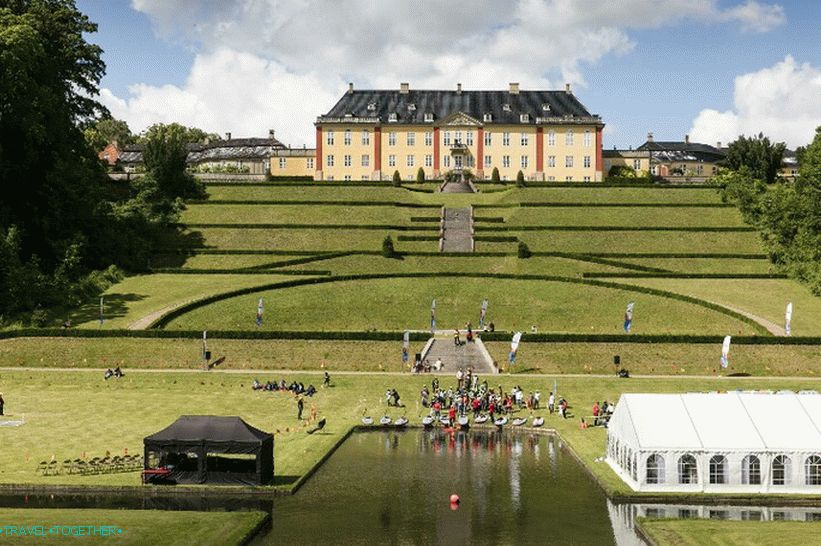 Ledreborg is a magical 18th century palace that is a great example of Scandinavian architecture. The palace has an impressive collection of paintings and furniture, as well as magnificent Baroque gardens.

Roskilde on a map of Denmark