Romania – the most detailed information about the country with a photo. Attractions, cities of Romania, climate, geography, population and culture.

Romania is a country in South-Eastern Europe, located on north of the Balkan Peninsula. Bordered in the south with Bulgaria, on southwest with Serbia, northwest with Hungary, on northeast with Moldova (Moldavia), in the north and east with Ukraine. Romania is unitary presidential-parliamentary Republic and washed by the Black Sea. It is industrial a state with a dynamic economy and a member of the European Union with 2007

Romania is one of the most picturesque countries in Europe with amazing natural diversity, charming province and magnificent ancient cities. She represents unique historical and cultural synthesis of the Balkans and the Western Europe, which gives it such a contrast and color. The most a popular tourist region (except Bucharest) is the mysterious Transylvania that is associated with the legends of Dracula, has many ancient Saxon villages and magnificent locks. 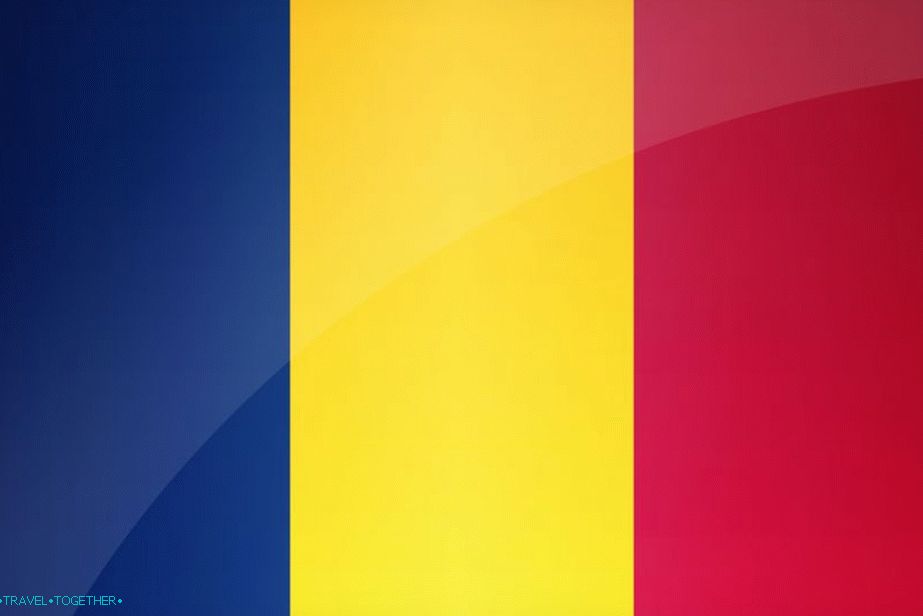 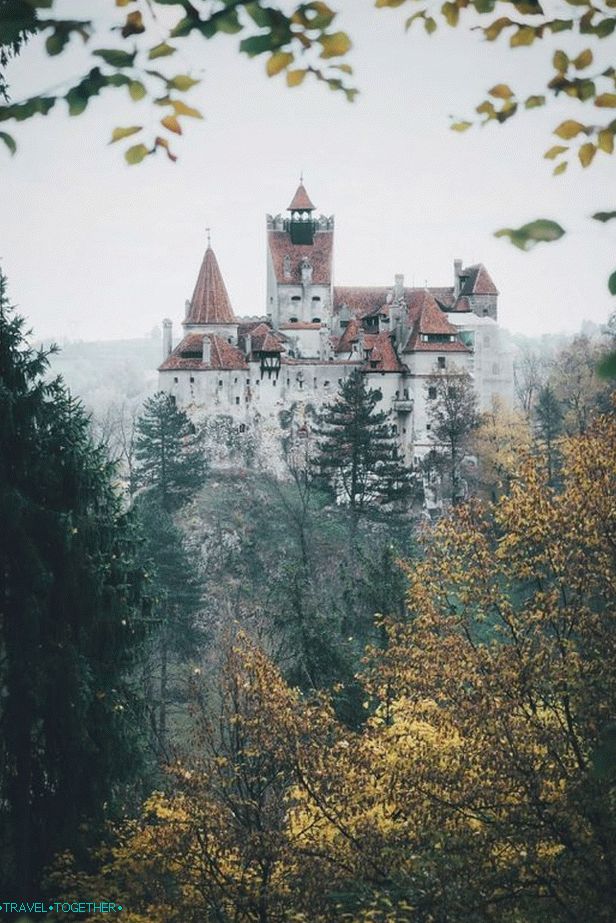 Romania is famous for its magnificent nature. Almost 50% of its territory are natural landscapes. About 5% of the area of ​​Romania is nature reserves and national parks. The country has one of the largest Europe’s areas of pristine forests, which occupy almost 30% of its territory. There are many wild animals in the forests, including 50% the entire European population of brown bears (not including Russia) and 20 % of the entire wolf population.

Romania has a temperate continental climate with a clear pronounced seasons. The climate is characterized by relatively cold in winter with frequent fogs and snowfalls, as well as warm and some rainy summer. On the Black Sea coast winters are milder with rare negative temperatures. 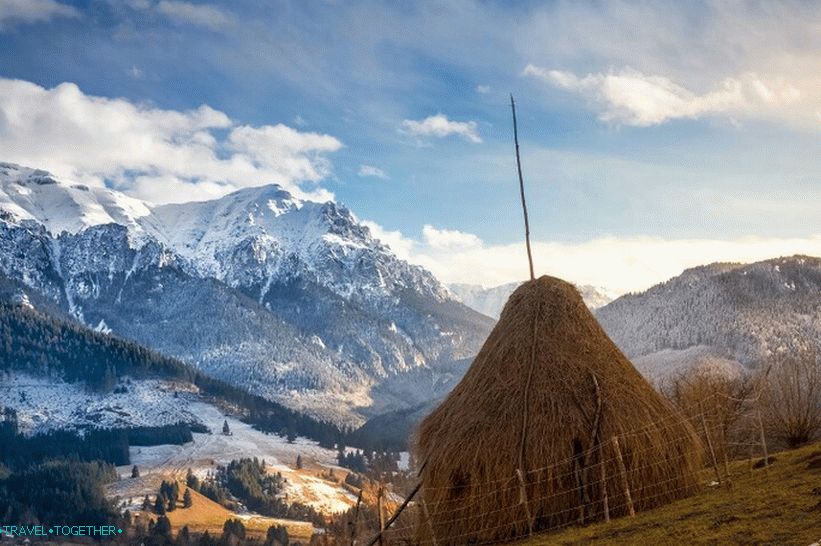 The best time to visit Romania is the warm season (the period from April to September). 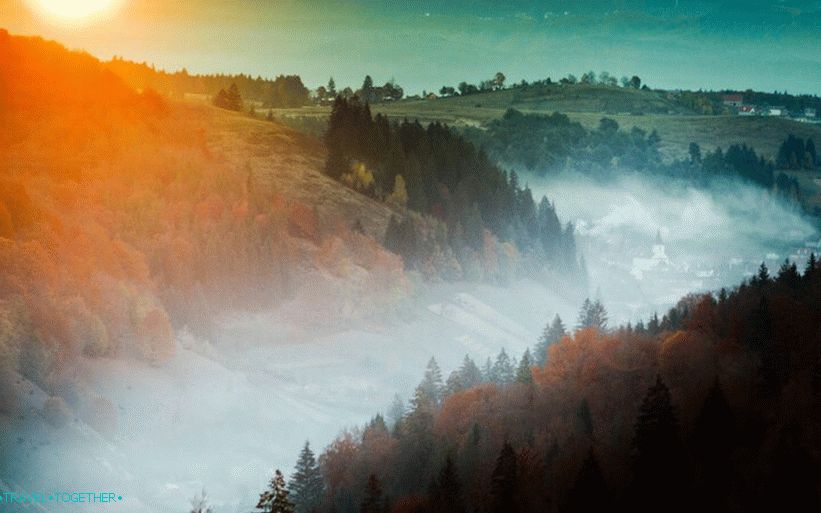 Romanian landscapes. Fog in the Carpathians

In the Middle Ages, on the territory of Romania, three Principality: Wallachia, Moldavia and Transylvania. In the early period in Transylvania began to settle the Hungarians. In the 11th century, this principality entered into the composition of the Hungarian kingdom, while maintaining a broad autonomy. In the 16th century, Transylvania gained independence and maintained its until 1711. In 1526, Hungarian troops were defeated. the Ottomans. From this period begins the period of the Ottoman vassalage Empire, which lasted until the 19th century. 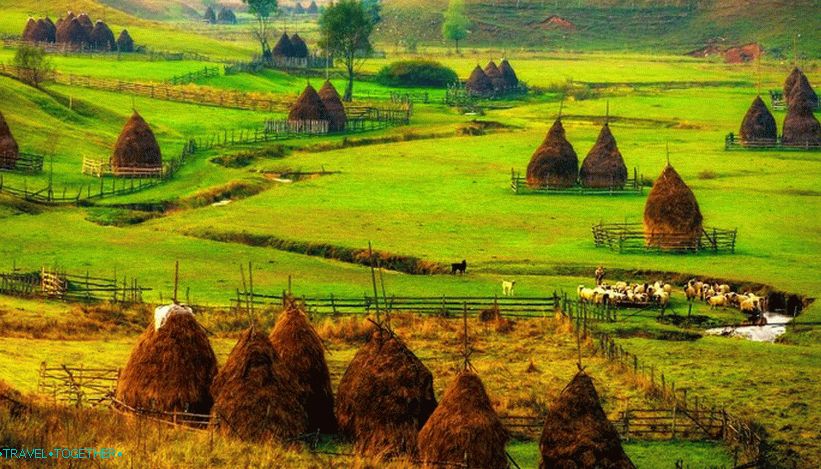 The 17th century in Romania is characterized by a series of strife. At the beginning 18th century Wallachia and Moldavia make an alliance with Russia with the aim of rid of Ottoman domination, but this war ended for them unsuccessfully. The Romanian National Revival Movement began at Transylvania at the end of the 18th century and embraced the entire Carpathian Mountains, inspiring unification of Moldavia and Wallachia in 1859 and thus creating modern Romania. 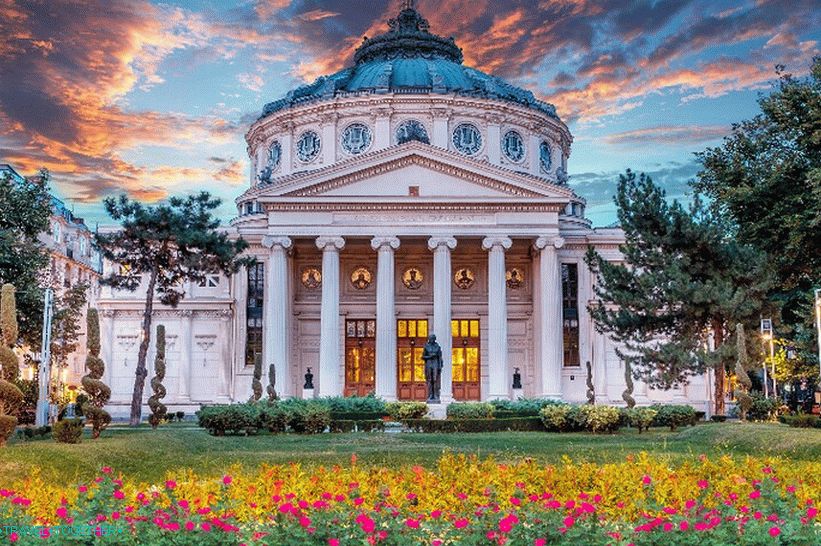 In 1881, based on the union of the Romanian principalities, The Kingdom of Romania is formed. At the beginning of the First World War Romanians were neutral. But in 1916 they performed on side of the Entente. As a result, the state included Transylvania and Bessarabia. During the Second World War, Romania was an ally of Germany. After her graduation was formed socialist republic. In 1965, came to power in Romania Nicholas Ceausescu, whose regime was overthrown in 1989 year

In the administrative-territorial plan, Romania is divided into 8 regions, which in turn are divided into 41 countries and 1 municipality (Bucharest). 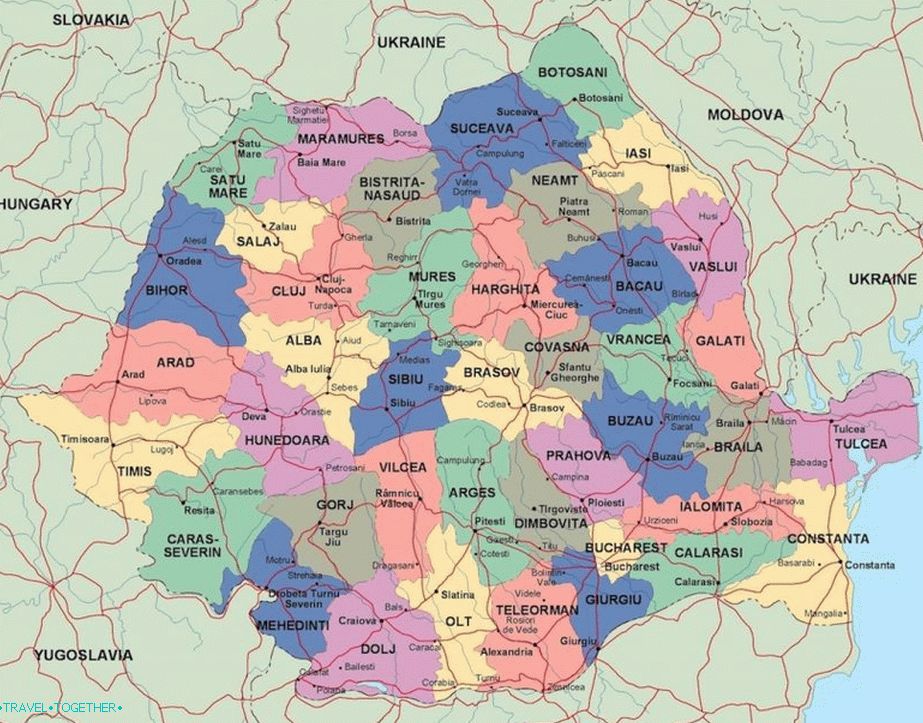 Ethnically, 90% of the population is Romanian. The second place is occupied by the Hungarians, who live in Romania more than 1 million people In the third place are the Roma, whose diaspora has number about 600 thousand people. Other large ethnic Groups: Ukrainians, Germans, Turks, Russians. Official language is romanian. Although about 7% of the population also speak Hungarian. 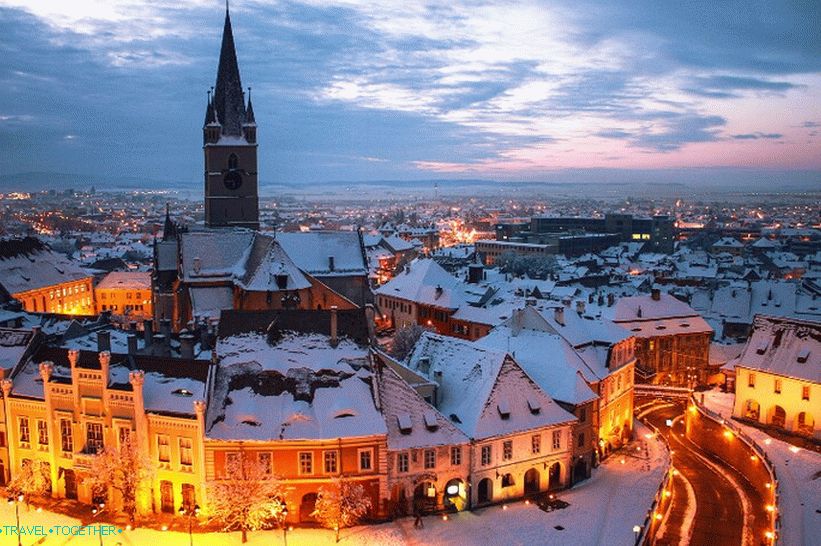 Romanians are hospitable, religious, peaceful and non-conflicting (especially for the province).

Romania has excellent transport accessibility thanks to location at the junction of the Balkans and Europe. Largest international airports are located in Bucharest, Timisoara, Cluj. Romania has regular air service with cities of Germany, Great Britain Spain, Italy, Greece, France, Russia, Ukraine, Belgium and other European countries. 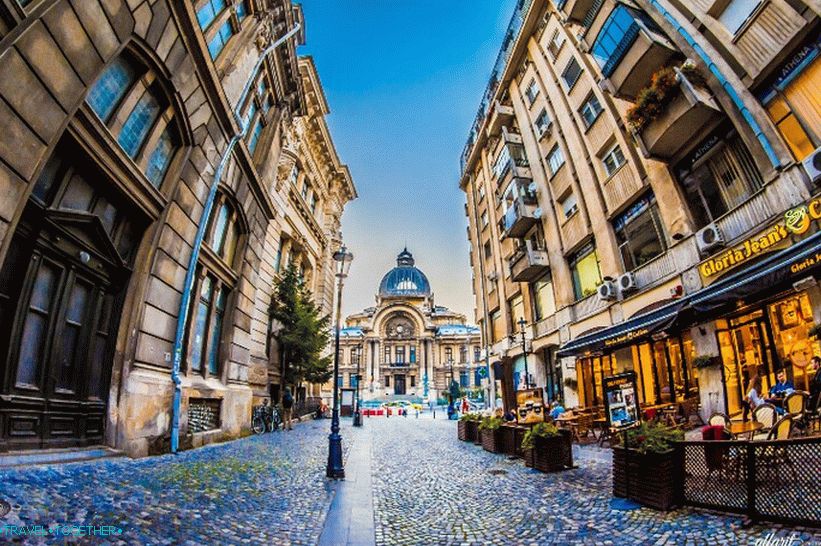 On the streets Bucharest

By train you can get to Romania from Vienna, Budapest, Istanbul, Chisinau, Moscow, Kiev. The country has a dense railway network, which connect almost all major cities. It should be noted that Romanian railways are not in very good condition and have a low speed of movement. At the same time the train is still most convenient means of transportation in the country. 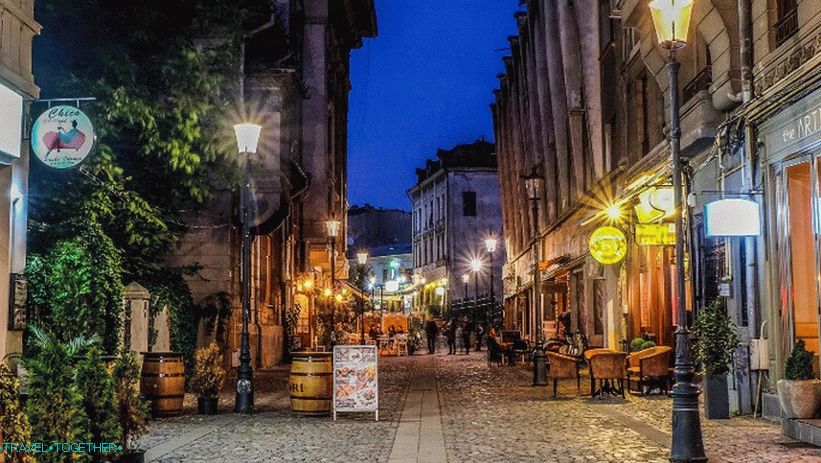 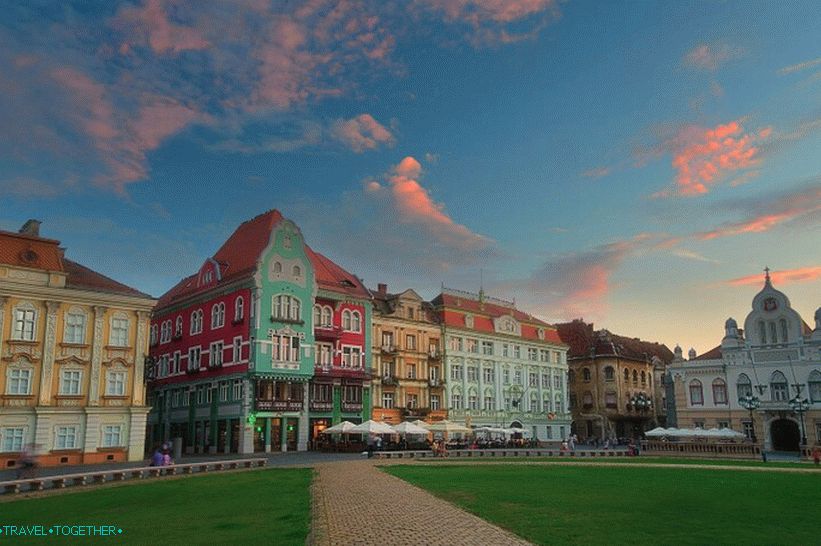 The sights of Romania are a great collection. monuments of history, culture and architecture, as well as remarkable natural objects. The country has a rich medieval heritage, including stunning castles, ancient churches, beautiful old ones cities and pretty villages. One of the most interesting regions Romania is Transylvania, located in the central part country. She claims to be a unique cultural and architectural heritage, being home to nearly 200 Saxon villages, churches and fortifications built between the 13th and 15th centuries. Seven of the fortified Saxon churches are unique monuments of the past and included in the UNESCO World Heritage List. 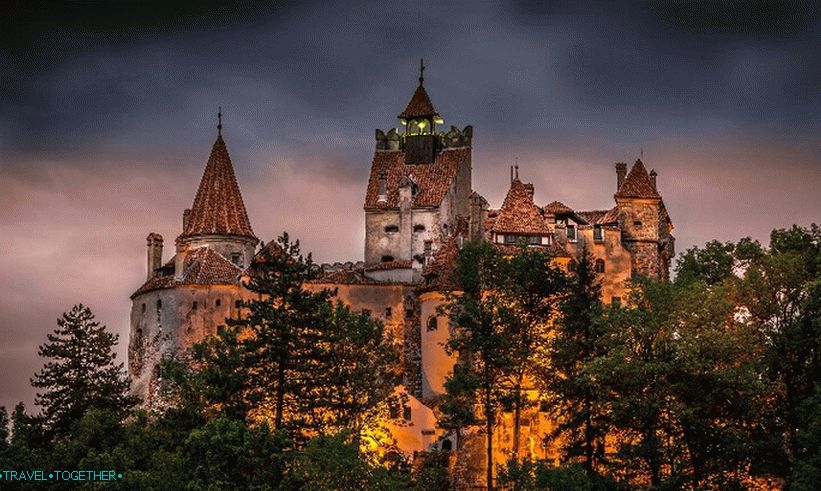 Bran Castle – one of the most famous sights Romania owes its fame to the myth of Dracula created by Bram Stocker based on a real historical figure (Prince Vlad Impaler). This magnificent structure is built on a high cliff and surrounded by a halo of secrets and legends. The castle was built in the 14th century on place of the medieval citadel of the Teutonic Knights of the early 13th century. Narrow winding stairs lead through many wooden rooms, many of which are connected by underground passages. They are stored wonderful collections of furniture, weapons and armor 14-19 century. 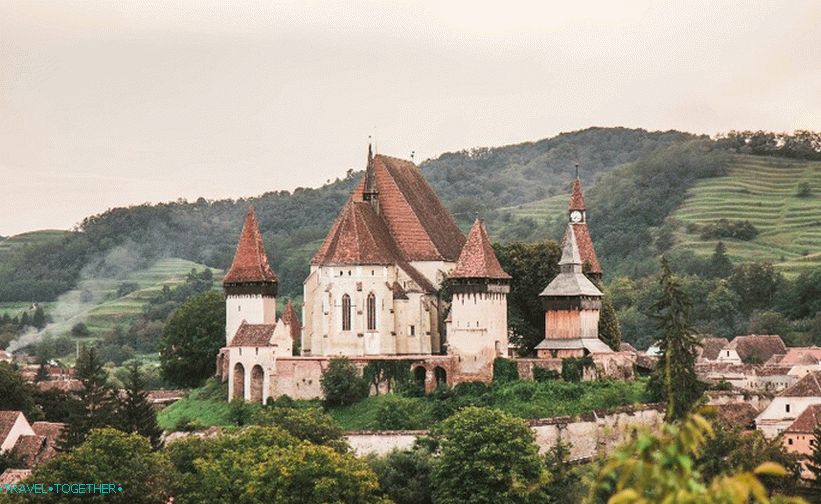 The fortified churches of Transylvania are magnificent monuments. Middle Ages included in the list of World Heritage sites. They were built between the 13th and 16th centuries by German colonists for protect valuable goods and food during long siege.

The most interesting fortified churches: 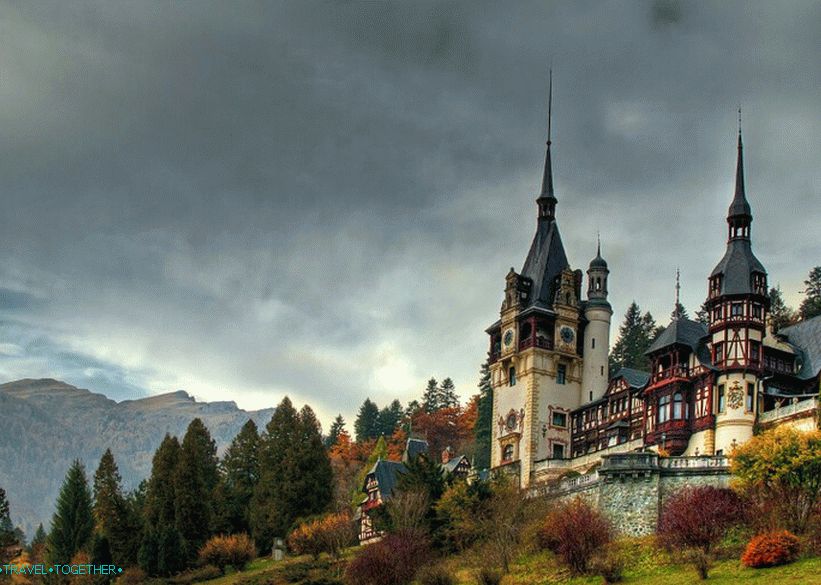 Peles is a masterpiece of German Renaissance architecture and one of The most beautiful castles in Europe. It was built in the 19th century in a picturesque terrain at the foot of the mountains Bucegi. 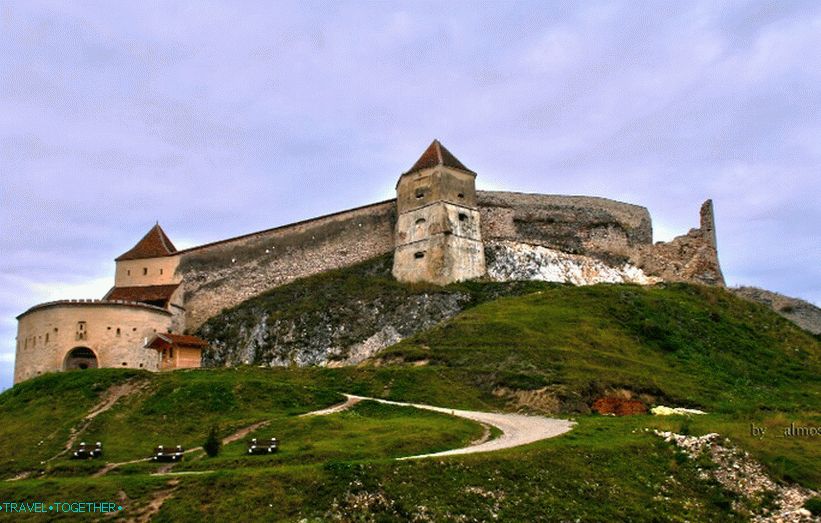 Fagaras – one of the largest fortifications Transylvania The fortress was built at the beginning of the 14th century. older wooden structure burned Tatars. 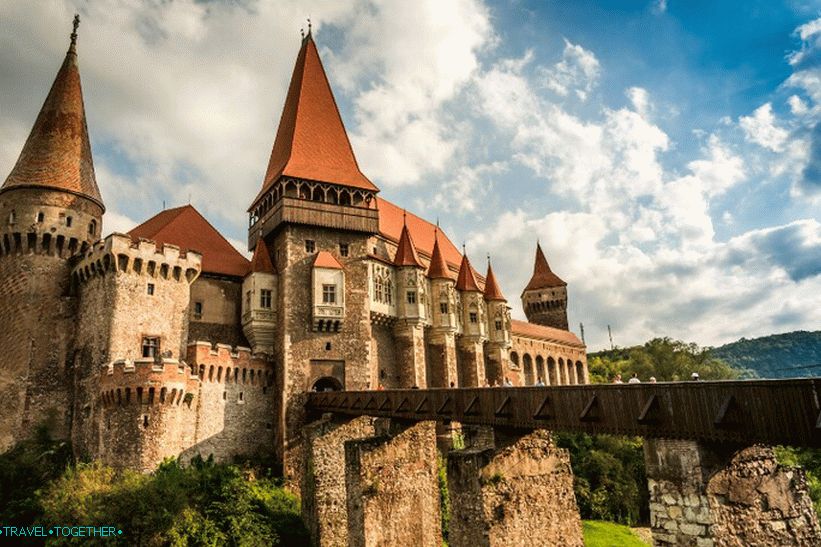 Corvin – the largest medieval Gothic castle of Romania, built in the 14th century on the site of the former Roman camp. This is one of the most stunning fortresses of Transylvania, which is preserved in excellent condition. 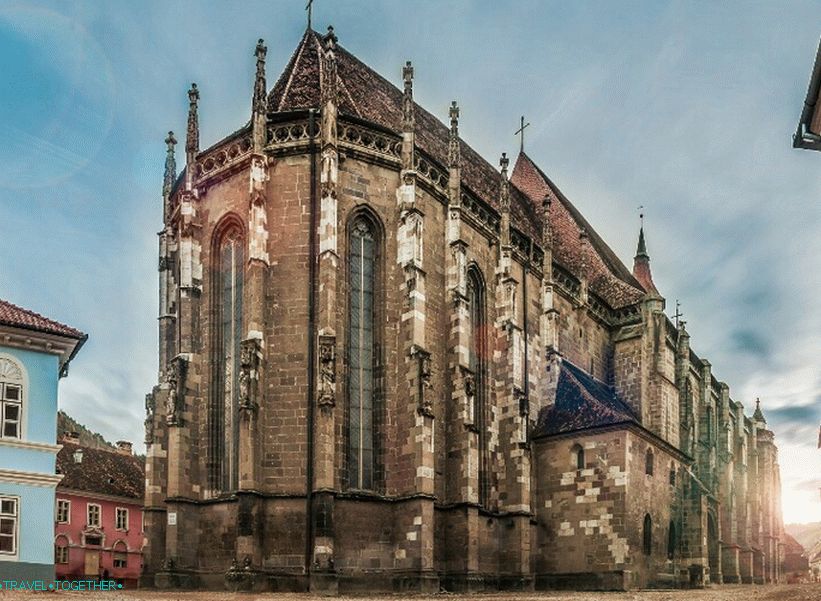 The Black Church in Brasov is the main Gothic monument of Romania and the largest church between Vienna and Istanbul. Built between 1385 and 1477 by the German community. The black church is named because of the fire, after which its walls are blackened. 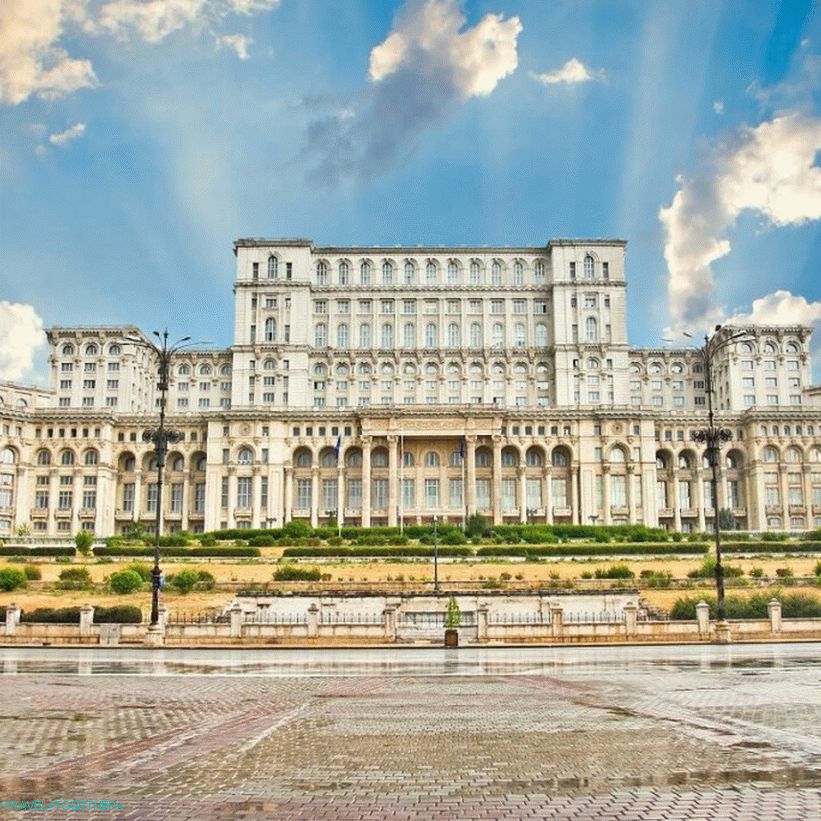 Parliament is a huge monumental building in Bucharest, built during the time of the Ceausescu regime. This is one of the biggest facilities in the world, which has more than 3,000 rooms. 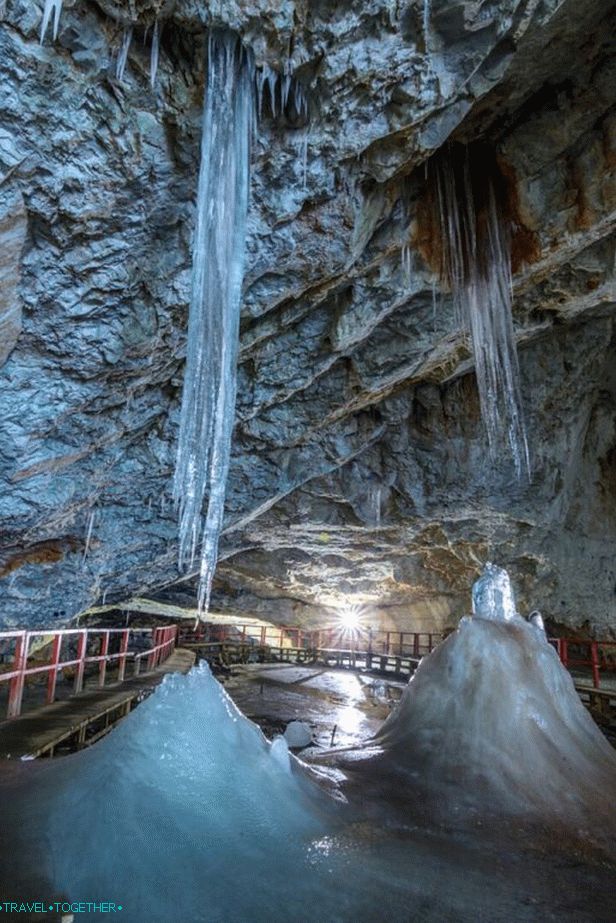 Skarisoara is one of the largest ice caves in Europe, located in the Apuseni mountains at an altitude of 1165 meters. 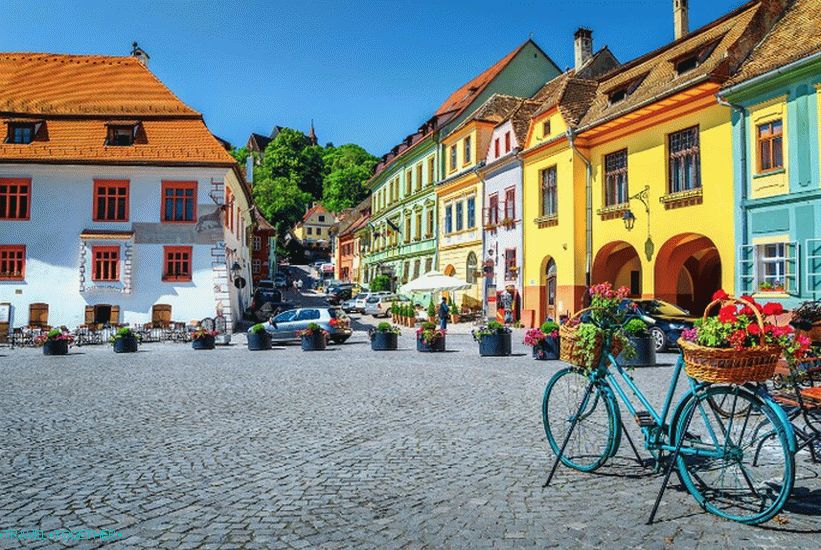 Sighisoara is a wonderful historical city that grew up around the medieval citadel. Is the subject of the World UNESCO heritage and is considered the birthplace of Vlad Tepes. 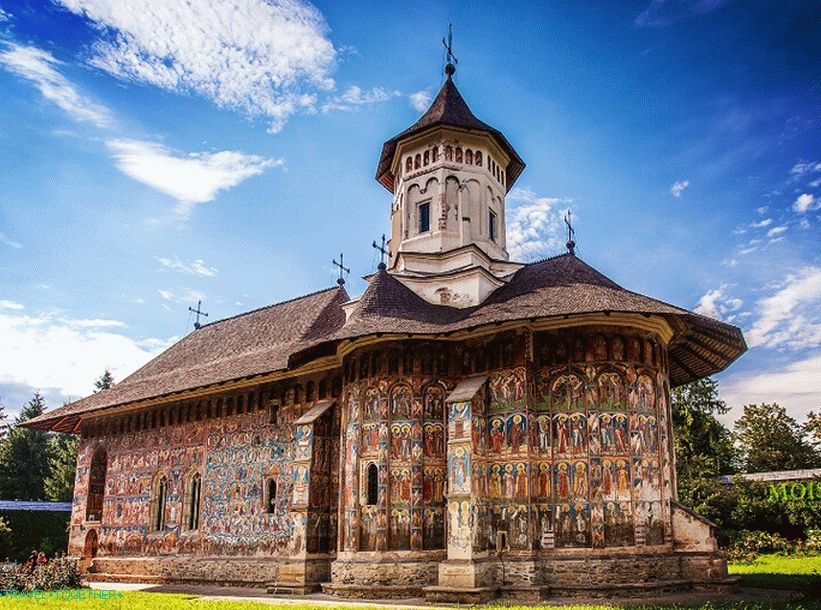 Painted Churches of Moldova – Orthodox churches and monasteries on Eastern Romania, built between the 15th and 16th centuries and painted magnificent frescoes. 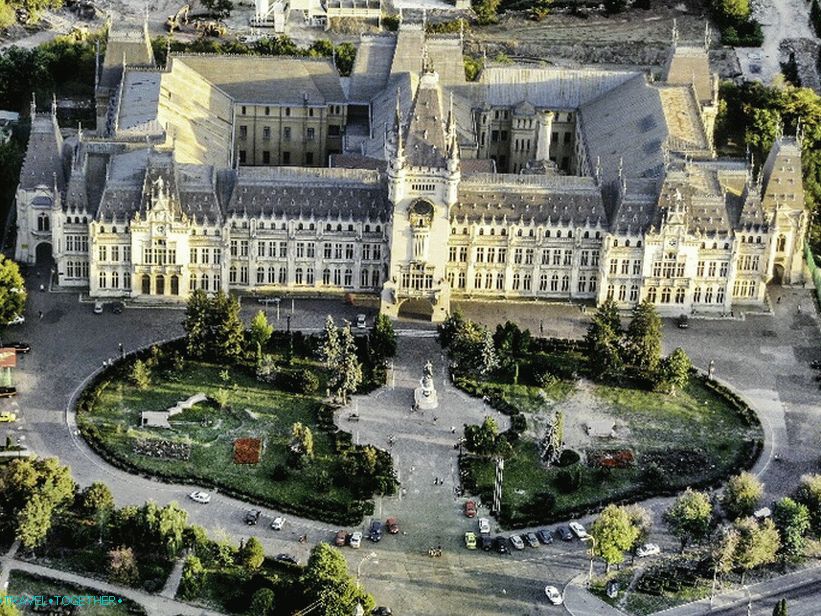 The Iasi Palace of Culture is one of the most iconic buildings in Romania with high clock tower. It was built in the 19th century in style. neogothic

Finding accommodation in Romania is very easy. With the growth of its tourist attractiveness is growing and the number of offers. The best way – book a suitable hotel through popular booking networks. Interestingly, in Romania, bed and breakfasts are priced at more expensive than two or three star hotels. At the same time they (hotels without rating) are often more modern and even more comfortable.

Most restaurants in Romania, especially in the provinces, serve Romanian food only.

Romania on the map