Riga, Latvia – the most detailed information about the city with photos. The main sights of Riga with a description, guides and cards.

Riga is the capital of Latvia and the largest city of the Baltic States, located on the Baltic Sea coast at the mouth of the Daugava River, which flows into the Gulf of Riga. Riga is known for its sights and old town that is listed UNESCO World Heritage sites. Historical Center is an amazing blend of the most diverse architecture from medieval to modern (art nouveau). Facades Many houses are covered with beautiful carvings, decorated with mythological and historical drawings, inscriptions and other decorative elements. 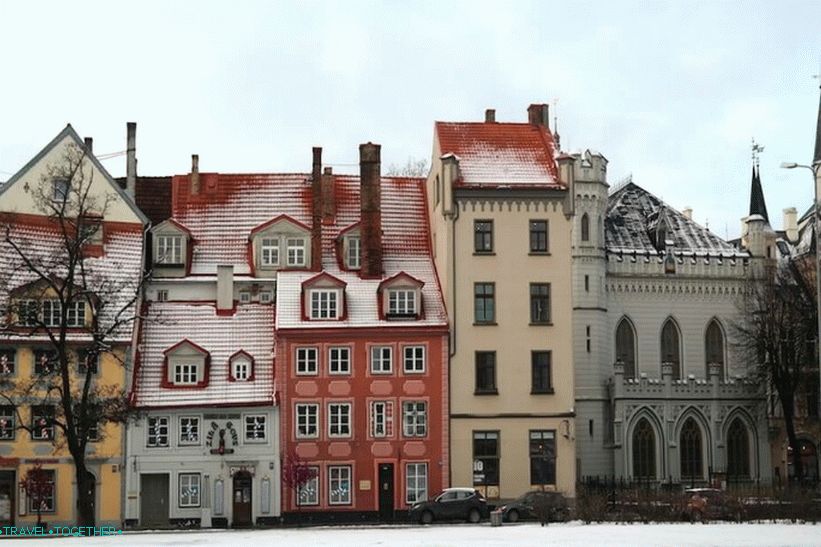 The Daugava River divides Riga into two parts. Old Town is located on east bank. Most of the city was destroyed by fires or suffered during the second world war. Therefore, most buildings are either well renovated or rebuilt from scratch in the 90s years of the 20th century, to return to Riga its historical appearance and, Of course, increase its tourist appeal. Old city surrounded by the architecture of the 19-20th century, followed by a multi-storey typical Soviet buildings.

Riga is located on the shores of the Gulf of Riga in the waters Baltic Sea on the banks of the river Daugava. Mostly populated the northern and eastern sides, since swamps are located in the west. The environs of Riga are the kingdom of small lakes and streams. 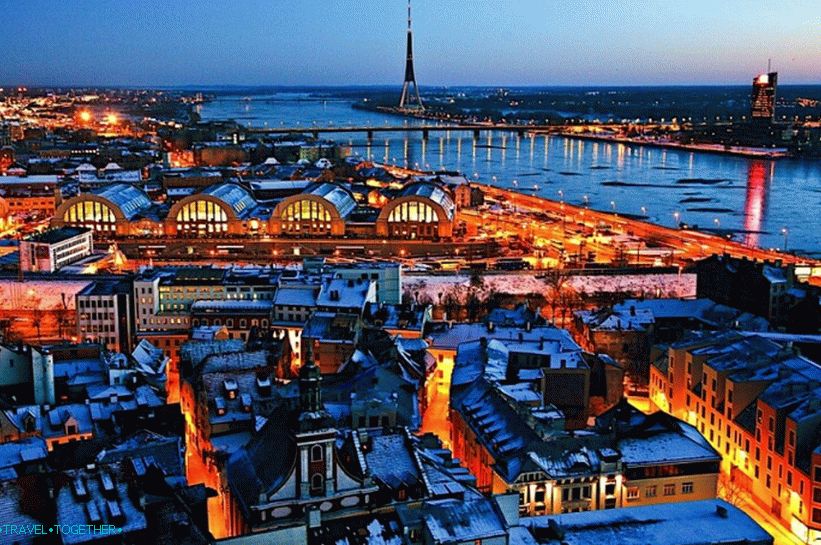 The climate is moderately continental with warm rainy summer and fairly mild, quite snowy in winter. Average summer temperature 15-20 degrees. In winter, small frosts are usually kept with frequent thaws.

Riga was founded in 1201 by Bishop Albert of Bremen, who built a small stone church here. Although already with mid-12th century, Swedish traders entered the mouth of the Western Dvina and climbed the river of the same name, from which the name originated cities. In the first years, the new town developed very dynamically. Riga quickly became the center of the historical region of Livonia. And already in the second half of the 13th century, the city is part of the Hanseatic League, becoming the most important shopping center of the entire Baltic. Composed Ganza Riga was until the 15th century.

With the expansion of the Teutonic Order to the east in 1492 the archbishop recognizes his protectorate. In 1522, as a result The reformation ends with the power of the Riga archbishops. After Livonian War Riga becomes free imperial the city.

In the first half of the 17th century, the city became part of the Swedish kingdoms with broad autonomous rights. After the Northern War Riga became part of the Russian Empire. The development of the city continued before the First World War. In 1918 the city was occupied by the Germans. and independence of Latvia was declared. In 1940, Latvia became part of the Soviet Union and remained a socialist republic until 1991 In May 2004, the country joined the European Union.

Riga is connected by air with most major cities Europe. The international airport is located ten kilometers away. southwest. From the bus station to the airport every 10-15 minutes Bus 22 departs. Ferry service is established with Stockholm, Copenhagen, Kiel.

You can get to Riga by train. Daily trains run from St. Petersburg, Pskov and Moscow. Convenient means of transportation is also a bus. Flights to the capital of Latvia ply from Moscow, Warsaw, St. Petersburg and other cities. Highways they connect Riga with Tallinn, St. Petersburg, Vilnius, Moscow Gastronomy of Riga and Latvia in particular is a combination traditional, European and Russian cuisine. Great attention in Riga food establishments are given to fresh seasonal vegetables and fruits. Traditional Latvian cuisine includes potato dishes, cabbage, turnip, beef, pork, game, fish and forest gifts. By the way, the capital of Latvia is distinguished by rather low prices. so you can always find a good and inexpensive place where you can have a tasty meal or just have a good time.

Find a cafe or restaurant on this site -www.liveriga.com

Riga is also famous for its vibrant nightlife. In the old The city can find a lot of clubs and bars that are deservedly appreciate the most avid party-goers. Riga is one of the main centers of Baltic shopping. On old streets you can find a lot of shops with souvenirs from amber, wood, ceramics, traditional products, footwear and clothing. To buy souvenirs in Riga cheaper, we recommend to walk on central market located a couple of minutes walk from Central Station or the streets of the old city. 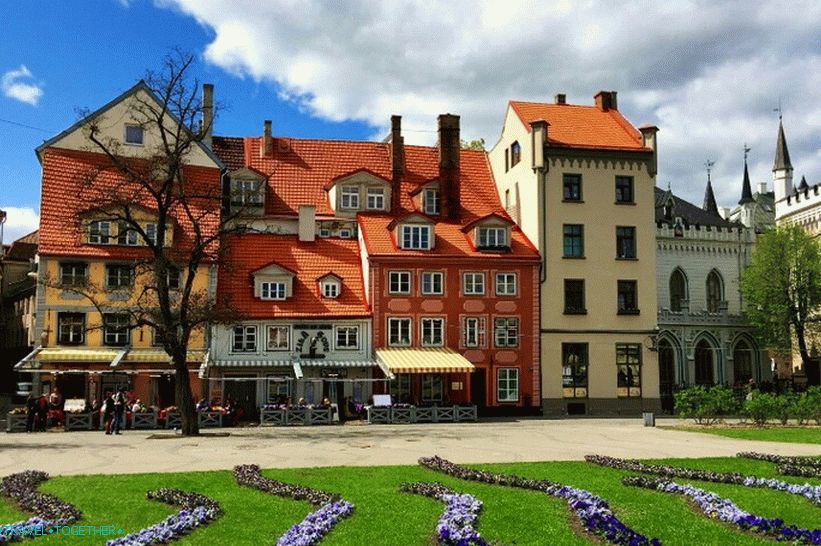 In December, on the eve of Christmas and New Year holidays in the old Christmas markets are opening in the city. And Riga itself acquires fabulous and romantic atmosphere. 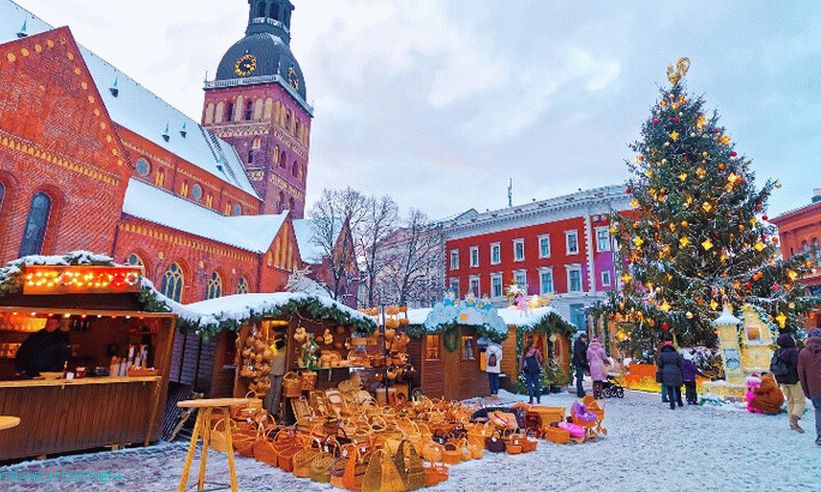 Riga’s public transport is represented by trams, buses, trolley buses. They all support the e-ticketing system. There are fares for a single trip, 24 hours, three, five days. Tickets can be bought at the box office at some stops, shopping vending machines, newsstands. 11 tram runs in Riga routes, 55 bus and 27 trolleybus routes. Trams are the most quick and convenient means of transportation in Riga. 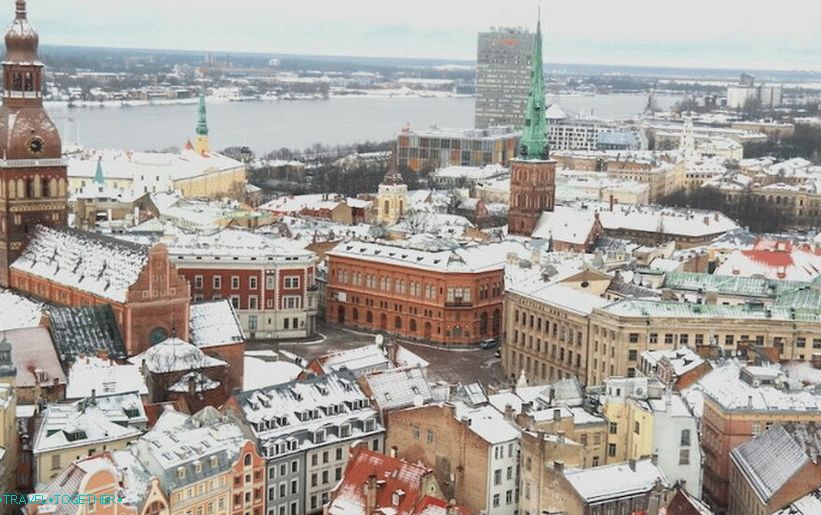 Riga is a city of interesting sights, a place where the centuries-old history is faced with modernity, dragging us in a whirl of unique architecture, ancient streets and squares, charming romantic atmosphere. The historic center of Riga listed as a UNESCO World Heritage Site.

The main attractions of Riga

The heart of the old Riga is the town hall square. This is one of The oldest squares of the city, which was virtually destroyed in World War II and recently rebuilt again. 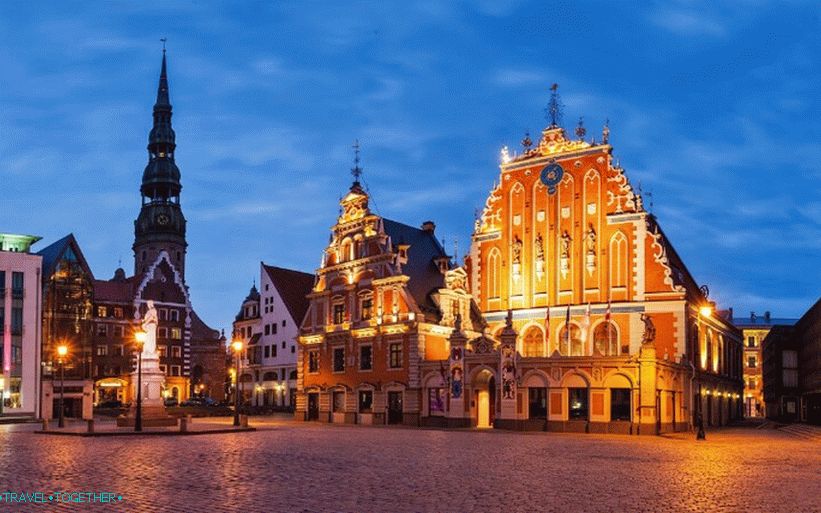 The highlight of the Town Hall Square architecture is the house of the Blackheads. and Town Hall. House of Blackheads – one of the oldest buildings in Riga, date construction of which the first half of the 14th century. Initially the house used for urban needs. In the 17th century the building became headquarters merchants. The house was almost completely destroyed in 1941 Restored only a couple of decades ago.

Opposite the House of Blackheads is a restored urban The town hall in which the Riga municipal authorities now sit. 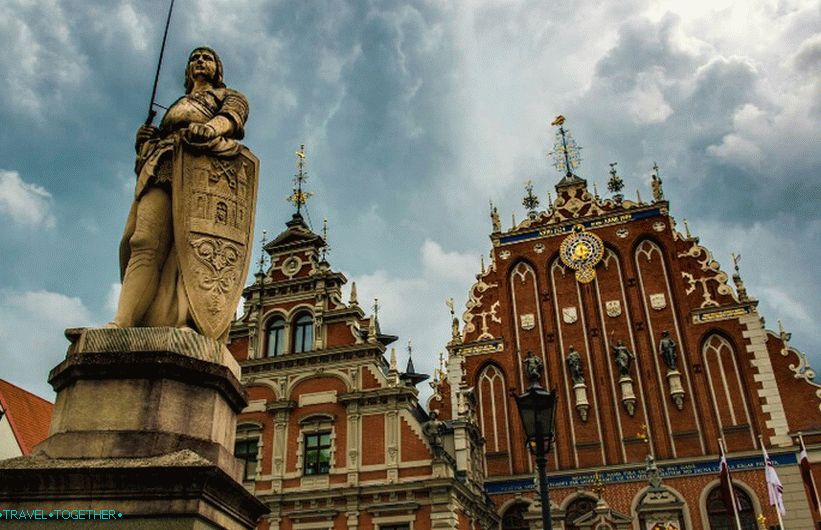 In the very center of the Town Hall Square is the old Roland. Roland was the nephew of Charlemagne and is a symbol justice and freedom. The first statue was installed here. more than 100 years ago. The original was destroyed during World War II. of war. The copy is restored in our days. Similar statues installed in many other European cities. Of course, the most significant a monument of this kind is the Bremen Roland. Not far from the Town Hall Square, the high spire of the church cuts the sky St. Petra. This is a true masterpiece of Gothic architecture and the most Riga’s high religious building. Church of sv. Petra was built in the 13th century and is one of the most valuable monuments sacral architecture in all Baltic. Inside the church you can familiarize yourself with the history of this ancient structure, see ancient tombstones. 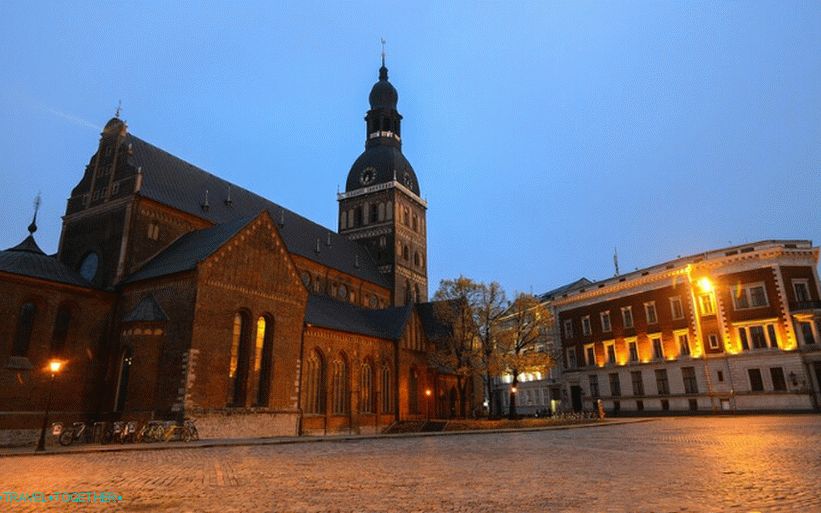 The next item to visit must be Domskaya square. This is the largest square of Old Riga. Area was formed in the 19th century as a result of the demolition of old buildings.

The pearl of architecture is the Dome Cathedral. This is the main temple Riga and one of the largest and oldest religious buildings Baltic States. The foundation of the cathedral belongs to the 13th century. It is majestic religious building combines Romanesque, Gothic and baroque. It was founded by Albert from Bremen – the founder of Riga. The modern look of the Dome Cathedral has found in the 19th century. 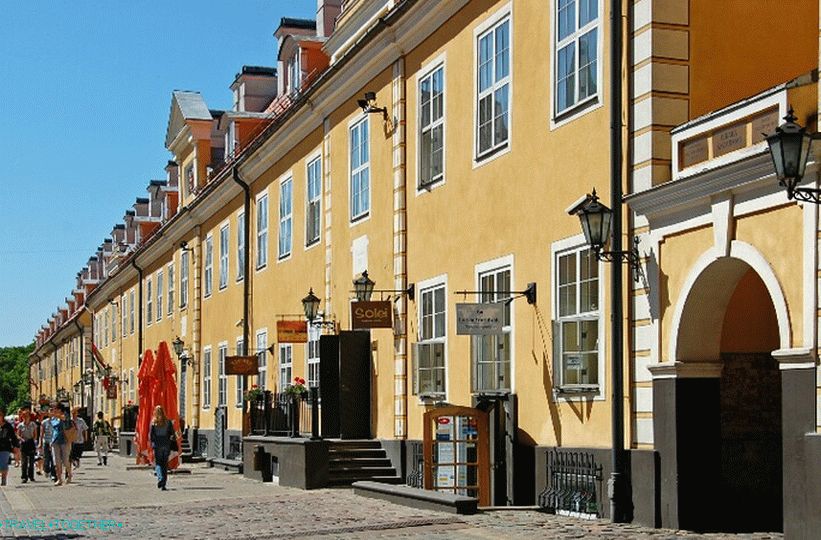 Ekaba barracks – a complex of buildings of the 18th century, built on the border old city building. In the opposite side is located The Powder Tower and the Swedish Gate. The Swedish Gate is the only surviving from 8 city gates of Riga. They were built at the end of the 17th century.

The Powder Tower is one of the city towers, which is referred to as 14th century. From the 17th century, gunpowder was stored in the tower.

We also recommend to take a look at Livov Square – one of the centers. youth life and Albert Square.

On Livy Square, be sure to pay attention to the famous Cat House – a 100-year-old building with wrought-iron copper cats on the roof, located opposite the guild building. There is a funny story that this house was built by a wealthy merchant who was not accepted in trading guild. He was so offended that he ordered on the roof of the house install copper cats facing the guild’s building backwards.

Of particular interest is the guild building, built in mid 19th century. 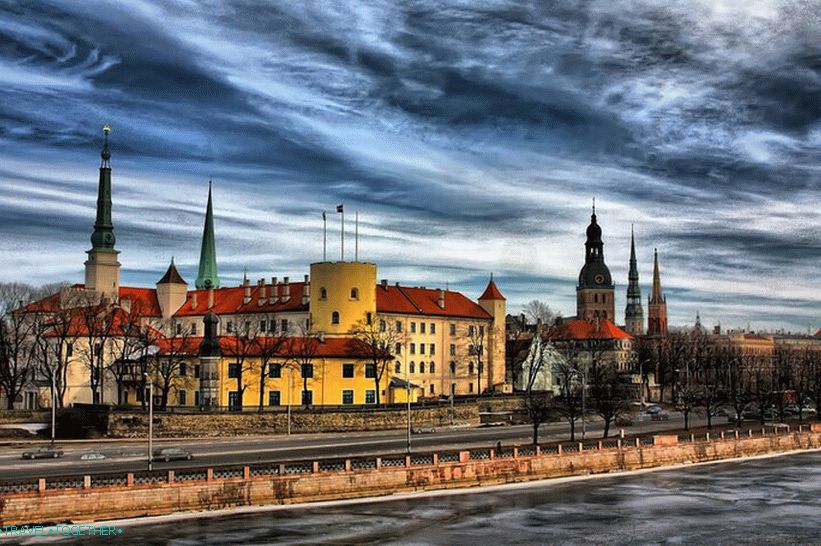 Riga Castle is practically the same age as Riga and its witness stories. Almost 7 centuries it stands on the banks of the Daugava. Building The first castle on this site dates back to the first half of the 14th century. Behind its long history the castle was destroyed more than once during wars and rebuilt. At the beginning of its history, he served only the defense destination Round defense towers were built in the 15th century. AT the present moment the castle is an example of classicism and the residence President of Latvia. As with any old castle, a lot is associated with it. stories and legends.

Other sights and interesting places of Riga

Building at Strēlnieku iela 4a, built at the beginning of 20 century, is a masterpiece of art nouveau. We also recommend to look at Alberta Street, where you can find many interesting buildings in Art Nouveau and Art Nouveau.

On the street. Mazā pils iela 17 is the oldest residential complex houses in Riga, which is called “Three brothers”. These houses were built in the 15th century by three brothers. The Riga TV Tower is the highest building in the Baltics and one of highest in Europe, built during the Soviet era from 1979 to 1986. It can be seen from almost all parts of the capital. Of Latvia. The height of the tower is 368.5 meters.

Not far from the church of sv. Peter located sculpture “Bremen musicians “according to the famous fairy tale of the Brothers Grimm, but with some political motive. 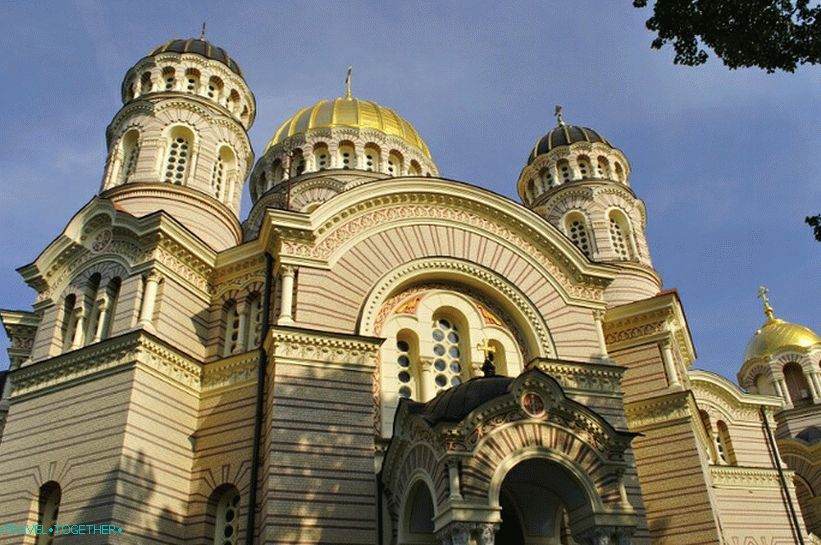 Church of the Nativity Of Christ

Church of the Nativity of Christ – the largest Orthodox church in Riga, laid at the end of the 19th century. This is a beautiful neo-Byzantine building. style. Church of sv. Jacob – Lutheran church of the 13th century with an elegant gothic tower. Although at the moment it is a catholic temple. Church of sv. John is considered the oldest religious building Riga. The church acquired a modern look at the beginning of the 16th century. In the middle of the 19th century on the site of the old bastion built Anglican Church.

We also recommend a look into the Convent courtyard – the complex medieval buildings of the Hanseatic Period. The current appearance of the building found in the 17th century.

Riga on the map of Latvia