Ronda (Spain) – the most detailed information about the city with photos. The main attractions of Ronda with descriptions, guidebooks and cards.

Ronda is a city in southern Spain in the province of Malaga. Located in on the rock around the deep gorge of El Tajo, through which is built impressive bridge. Rhonda – one of the most beautiful cities Andalusia, a colorful ancient tapestry, woven from sinuous threads streets, old white houses and picturesque landscapes. Landscape, the atmosphere, history and legends make this the bullfighter’s cradle and artists so unique.

The city is divided into three parts: the historic center or the old Arab Medina, San Francisco neighborhoods, separated by urban walled area Mercadillo, which is on the other side of the river Guadalevine. Rhonda encourages a leisurely walk on his ancient the streets, exploring every detail of this ancient Moorish city on the south bank of the Guadalevine, whose medieval walls are all stand by. It is worth crossing the Puente Nuevo (“new bridge”) and wander along Alamede del Tajo, stopping at every strange corner and historical monument and then set off to regain your strength in one of the local restaurants.

Ronda is located 50 km north of Marbella and 100 km west of malaga. The city stands in a mountainous area at an altitude of about 750 m above sea level. The Guadalevine River divides it in half and forms the steep canyon of El Tajo, above which is built town.

The climate of Ronda is Mediterranean. It is characterized by a rather regular seasonal regime, warm, dry summer and moderate in cool winters with occasional negative temperatures. Spring and Autumn is usually mild and moderately warm. Average annual temperature is about 16ºC. 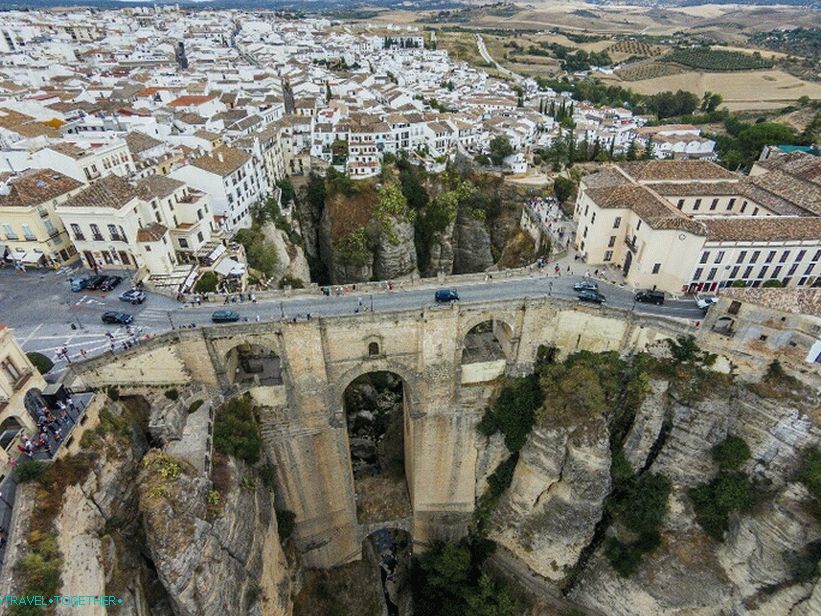 The best period to come to Ronda: April-June and September-October. Although the city is located at an altitude of approx. 750 m above sea level, therefore the climate here is much milder. It’s not as hot in summer as in other cities of Andalusia. In the cold period quite often go rains

Rhonda was settled in the 6th century BC by a tribe. Celts-bastovo. At that time, the city was known as Arunda. Later Phoenician settlers settled in Acinipo, also known as Old Ronda, located about 20 km to the east. Current the city is of Roman origin and was built as a fortification The Second Punic War (218-201 BC).

Rhonda was one of the cities of the Roman province of Betik, which had the right to use the ancient Latin law, and even could coin coins. Its inhabitants had the same rights as citizens. Of rome

After the collapse of the Roman Empire, Rhonda was first occupied Germanic tribes, and then the Visigoths, who ruled before the Arab the invasion in 713 year. The Moors have renamed the city Hisn Ar-Runda (“Castle of Rund”). They built the current historical center (La Ciudad), south of the gorge. 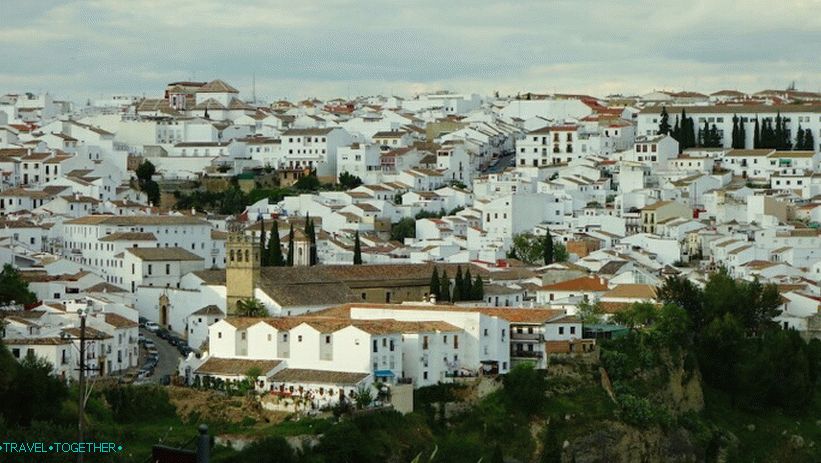 Rhonda has long remained one of the last outposts of the Moors in Andalusia. The city was conquered by the Spaniards only in 1485, who then gradually supplanted the remaining Muslim population. In the 17th and 18th centuries, Rhonda expanded northward through a gorge in the new city (El Mercadillo), and Puente Nuevo, completed in 1793 year, connected it with the historical core.

In the 19th century, Rhonda was home to numerous partisan detachments who fought with the troops of Napoleon, and then the bandits and adventurers. During the Spanish Civil War, the city became place of many fights. There are reports that about 500 supporters Phalangists were dropped into the gorge. Rhonda has rich traditions bullfighting and boasts one of the oldest arenas in Spain, built in 1785.

Rhonda has no access to a major highway, but to get here by car from Seville, Malaga and Cordoba is not difficult. AT The city is regularly run by buses from the above cities. Railway communication is not very frequent, but there are options to get there. to Ronda from Algeciras, Cordoba and even Madrid.

The main shopping street is Carretera Espinel, which runs from Arenas to the east. Many shops can be found on the streets on the way to to the bridge. 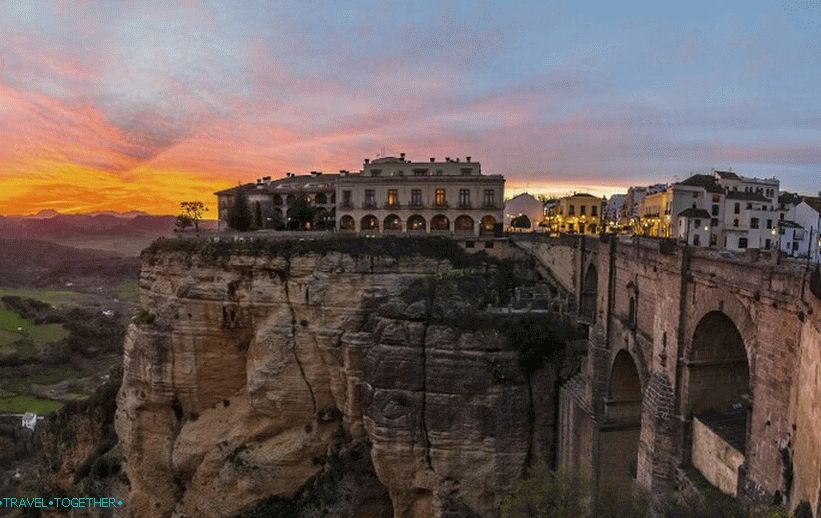 In the city you can find many restaurants and cafes with delicious Andalusian and Spanish cuisine. In the vicinity of Ronda on small wineries produce high-quality red and white the wine. 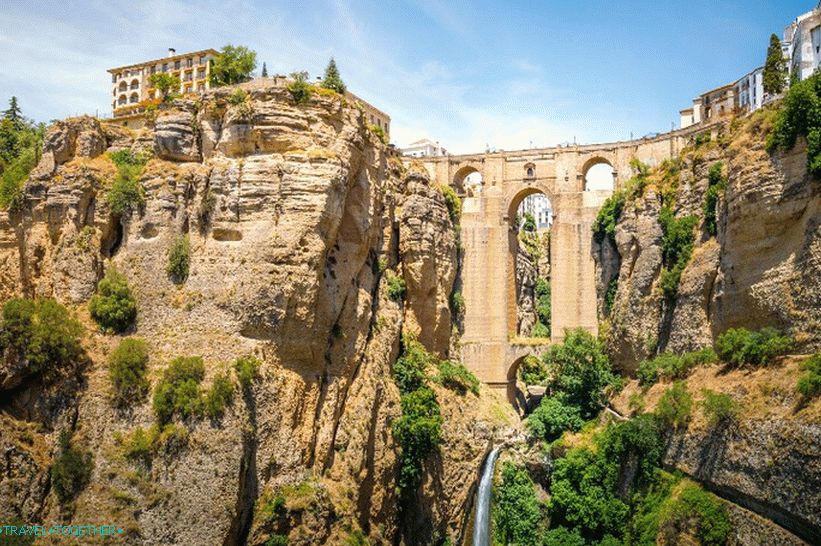 Puente Nuevo (New Bridge) – an impressive stone bridge, one of Ronda characters. It was built at the end of the 18th century and connected the area Mercadillo and the old town. From the bridge there is a beautiful view of gorge El Tajo. 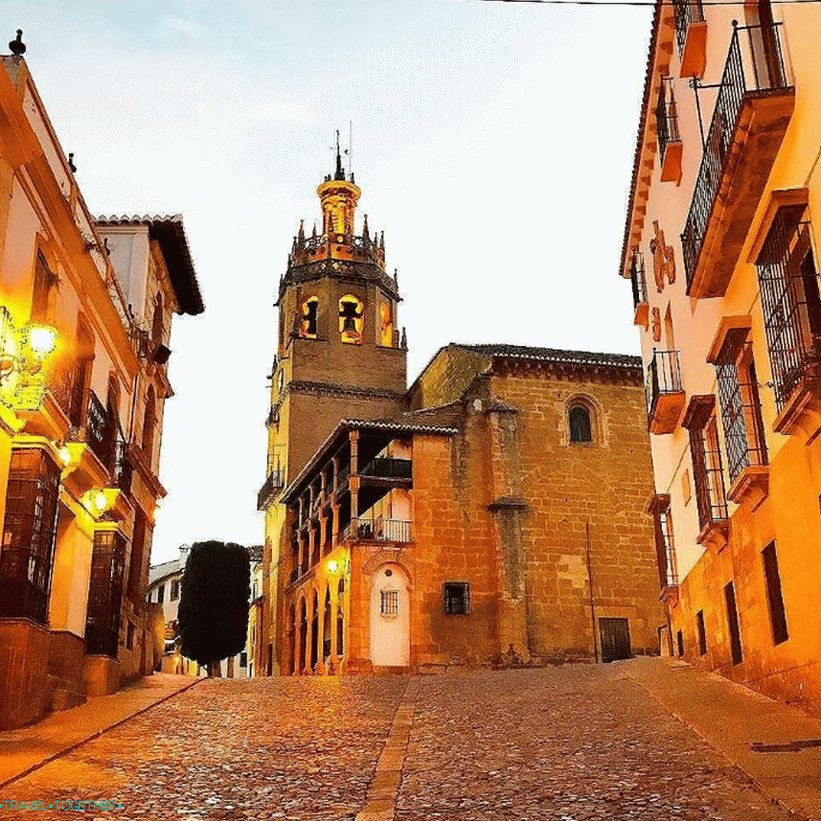 La Ciudad – the old Moorish city with historical squares, narrow streets and charming old houses. It is a heart and the soul of Ronda, which combines the atmosphere of an ancient Arab cities and medieval Spain.

In the picturesque square of Duquesa-de-Parcent is an old Church of Santa Maria la Mayor, which was built on the site of the former mosques. The church has kept four Moorish domes, however The interior is made in the style of Gothic. West of the cathedral, on the edge plateau, is the Palacio de Mondragon. This is a beautiful palace in Moorish style and Renaissance style. Armityan Street there is a museum of bandits, which illustrates their history from 19 century. The bandits lived in the mountains surrounding Ronda.

Plaza de Toros is one of the oldest bullfighting arenas in Spain. It was built in 1785. It is a monumental a structure with an arena of 66 square meters and two tiers arcade galleries for spectators. The galleries have elegant arches of tuscan columns, as well as royal cabinets. Rhonda was the birthplace of the romero dynasty – matadors who developed modern bullfight. 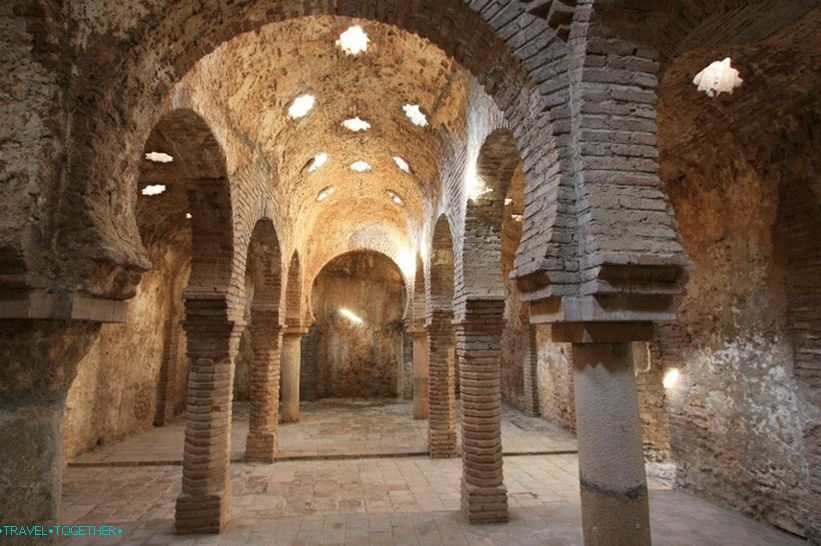 Arab baths – thermal baths of 13-15 centuries. Considered the most preserved Moorish baths in Spain. Baths were built along Arroyo de las Culebraz, a source of spring water, which has a well-preserved water wheel from the Moorish period Like the ancient Roman baths, the complex has cold, warm and hot baths (the heating system was completely hydraulic). However, the architecture embodies the Moorish design with a central hall and two rooms separated characteristic arches in the Arab style. 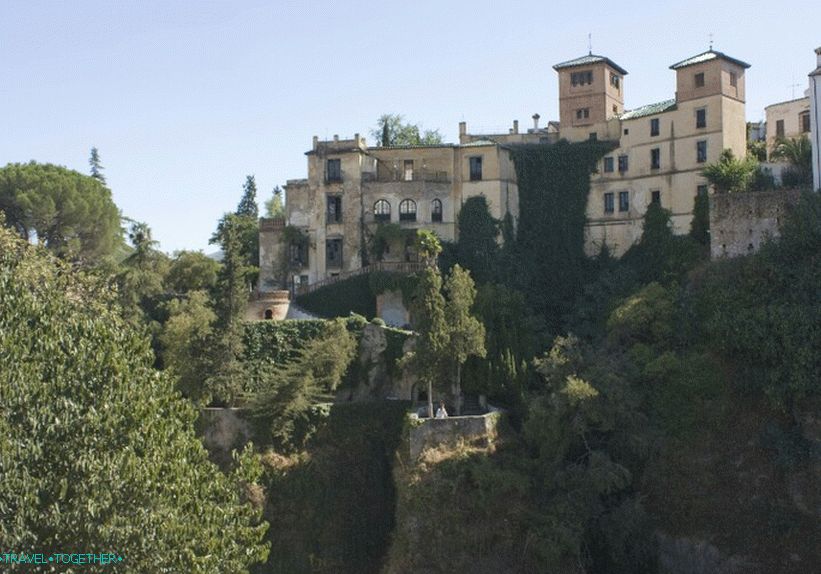 Casa del Rey Moro or the House of the Moorish Kings – Palace 18 century, built on the site of a medieval well. Here is arranged beautiful terraced garden. The palace has never been home to Moorish rulers. 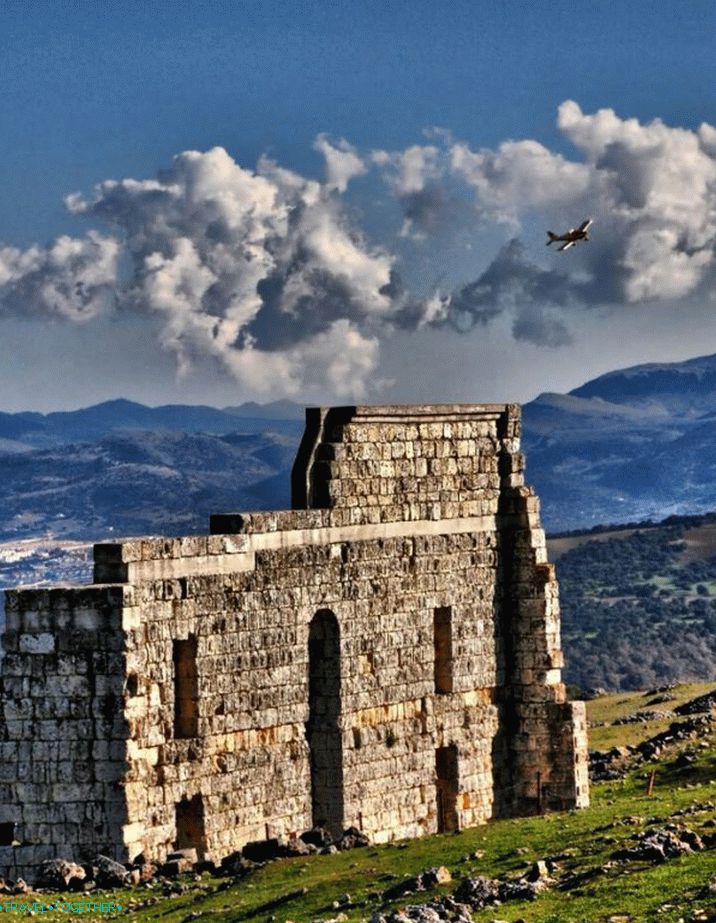 Achipino is one of the oldest places in the environs of Ronda with ancient roman ruins. Although the origins of the settlement go back to the Phoenicians. This The archaeological site is located on a high hill. Most The ruins date back to the 1st and 2nd centuries AD. Here you can see the typical Roman layout: in the center of the hill you can find fragments of the Forum or public square, nearby were built public buildings and terms. 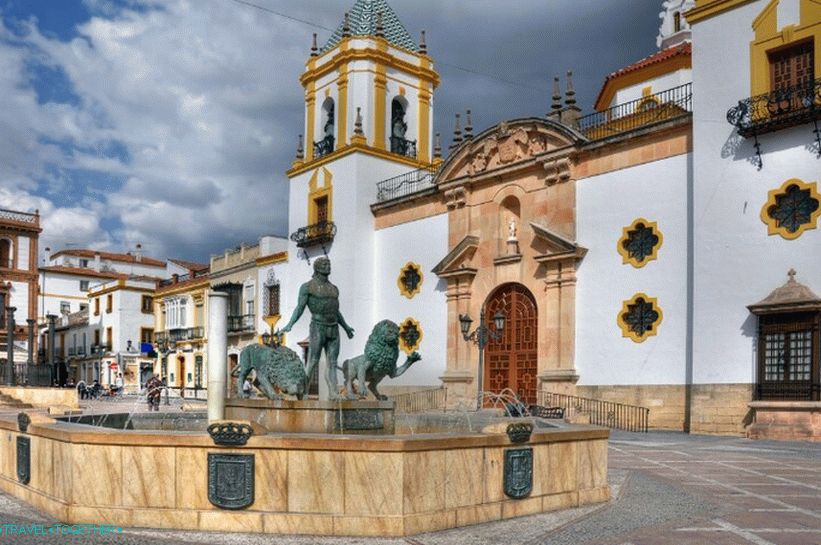 Socorro – church and square in Ronda. The church was built in 1956 Previously there was a Christian chapel and hospital. In the center of the square is a fountain. 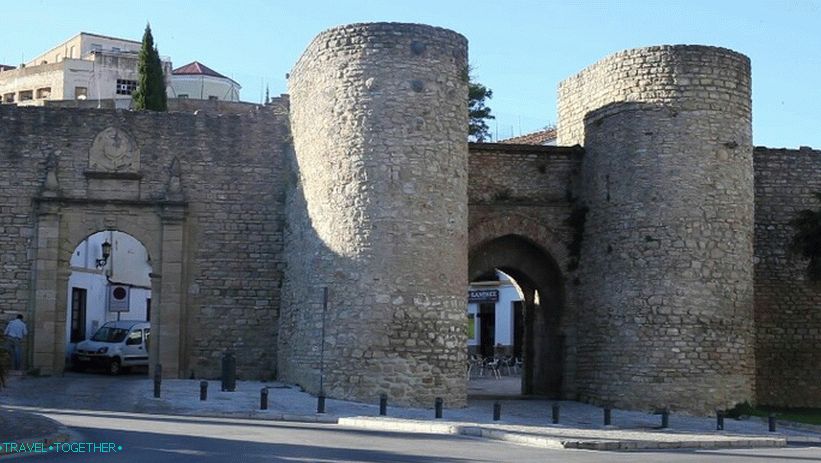 Ronda’s location on top of a rocky hill gave the city strong strategic as well as defensive value. Medina was built with clearly defined limits. One side the old town was bounded by a gorge, and on the other – powerful by walls.

The gate is well preserved from the old city fortifications. Almokabar, located in the southern part of the historic center. They were built in the 13th century and restored by Charles V. Nearby was added a new entrance with a square base and a tower with battlements made in the style of the Renaissance. Another wonderful piece urban fortifications located in the eastern part of the city. This the area consists of a double defensive line of walls where Arab neighborhoods, as well as Arab public baths.

Monastery of St. Domingo was built by Catholic monks in the 15th century. By the end of the 18th century, the complex was practically abandoned and in the 19th century went into private ownership. In its south-eastern part preserved original chapel. 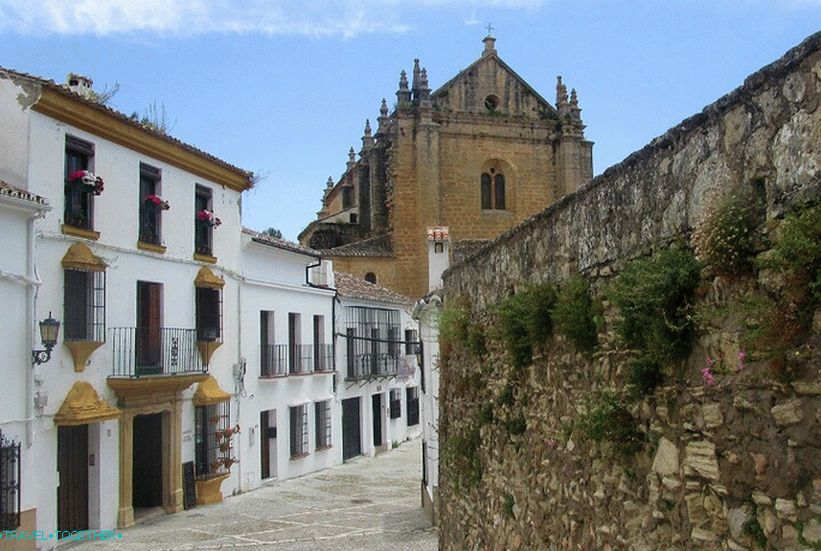 Church of sv. Of the spirit

Church of sv. Ghost – an old church whose construction began in the 15th century after the conquest of Rhonda. This is a simple one nave. Church in the style of the Spanish Gothic. 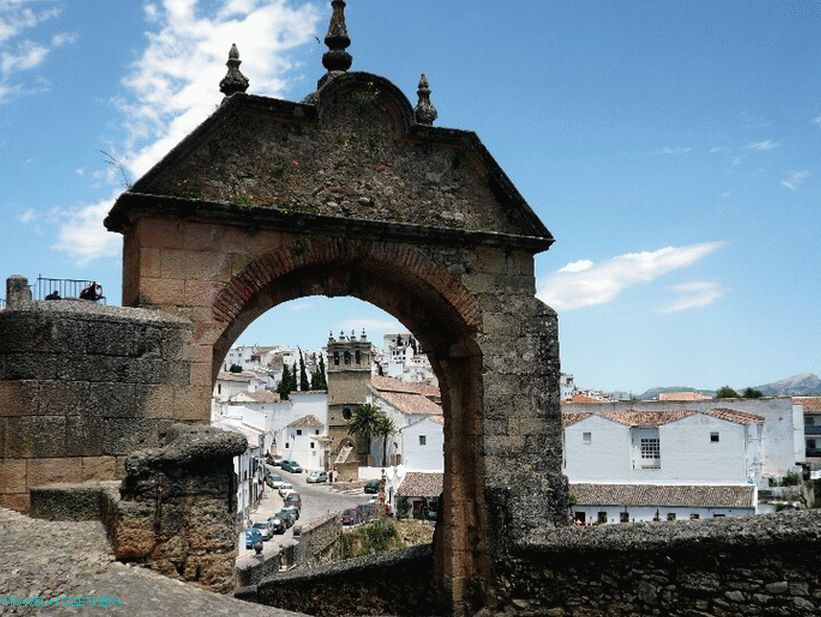 Arch of Philip V – consists of one arched stone arch masonry with three peaks on top and decorated with coats of arms of the kind Anjou. 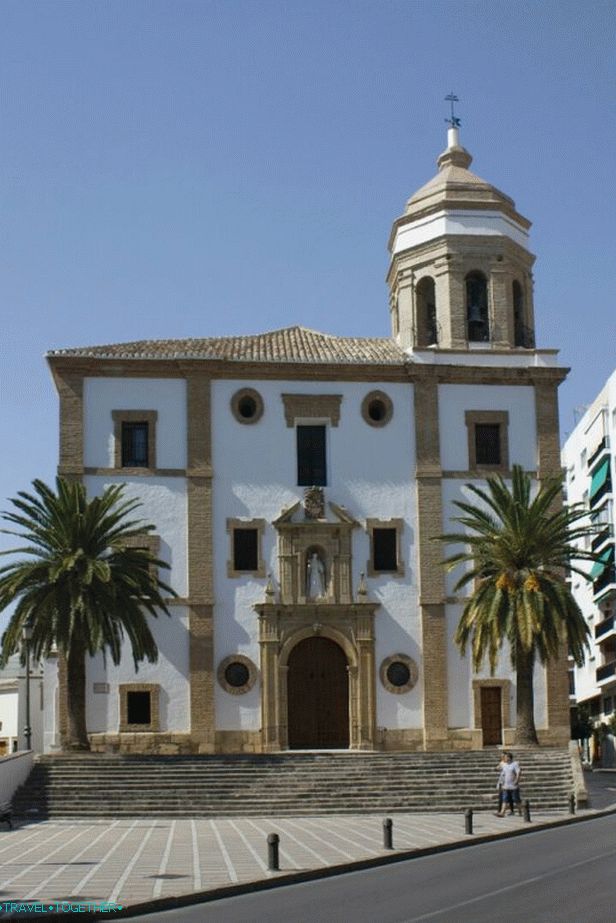 Church and monastery of merced

Merced is an ancient religious building of the 16th century, which contains valuable works of art. 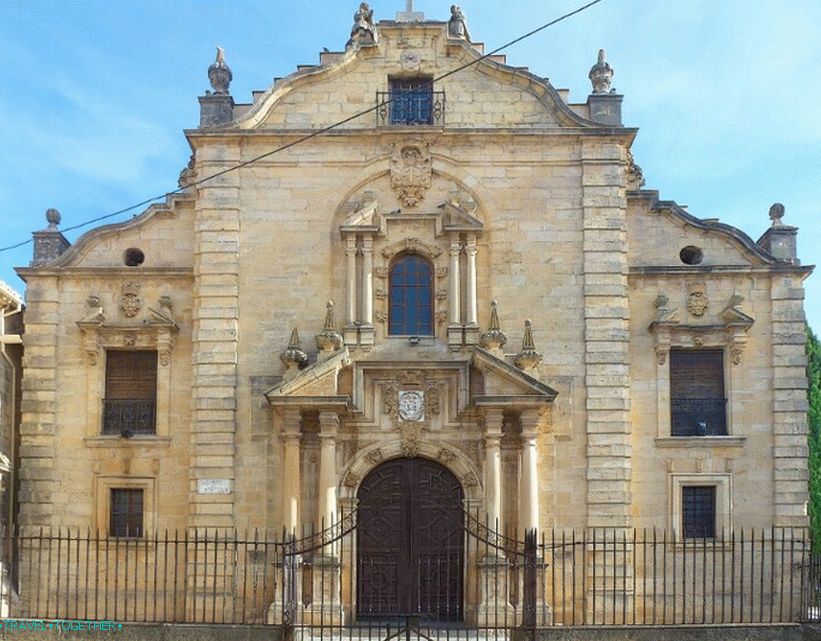 Church of sv. Cecilia is a stone baroque building. Earlier It was part of the monastery belonging to the Order of the Trinity. 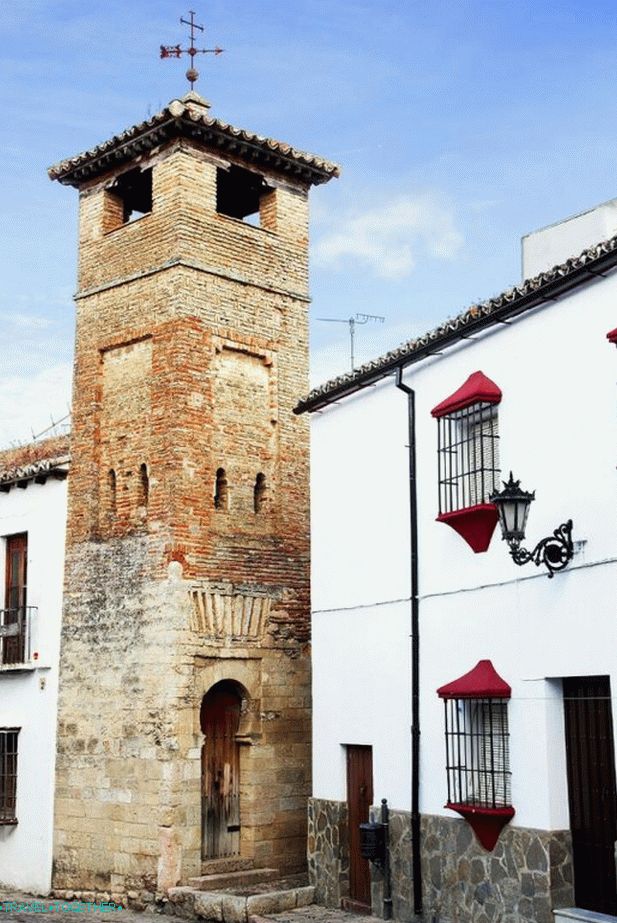 Minaret of sv. Sebastian – was previously a small tower, owned by one of the mosques of rhonda and then used as the bell tower of the now-vanished church. The tower has a square base. The lower part dates from the 14th century.

Ronda on the map of Spain