Regensburg (Germany) – detailed information about the city from a photo. The main attractions of Regensburg with a description, guides and maps.

Regensburg is a city in Bavaria with an interesting history and architecture, one of the most visited cities in Germany. Located at the confluence of the Danube and Regen rivers, which divide it into two parts. Regensburg is one of the oldest cities in the country with magnificent historical heritage, Altstadt which is brought into UNESCO World Heritage List.

Panorama of the Old Regensburg City

Regensburg is one of the largest cities of Bavaria, yielding only Munich, Nuremberg and Augsburg. He is amazing combination of ancient monuments and traditions, modern buildings and youth. Here everyone will find what to see and what regardless of age and preference – from walking through medieval historical centrudo night trips clubs and shops.

The nearest airports are located in Munich and Nuremberg. The distance from Regensburg to the capital of Bavaria is 105 km. Travel time – less than 2 hours. The most economical way to travel the bus Flixbus. Schedule and ticket prices can be found here. -https: //www.goeuro.com

Regensburg can be visited at any time and season. It all depends on Your preference. Since the city is located in southern Germany, the climate here is warm and comfortable enough. small frosts and unstable snow cover. Least number of tourists in March-April and October-November.

Regensburg in the winter

Table of temperatures and precipitation

Regensburg offers great shopping opportunities. Among the winding old streets are countless small and big stores, boutiques that offer wide the range of various goods from souvenirs to branded things. Almost every district has a large shopping center. The largest among them are Regensburg Arcaden and Donau Einkaufszentrum.

More than 500 restaurants and other restaurants operate here. similar projects of various price categories, which, in mainly concentrated in the historical center. 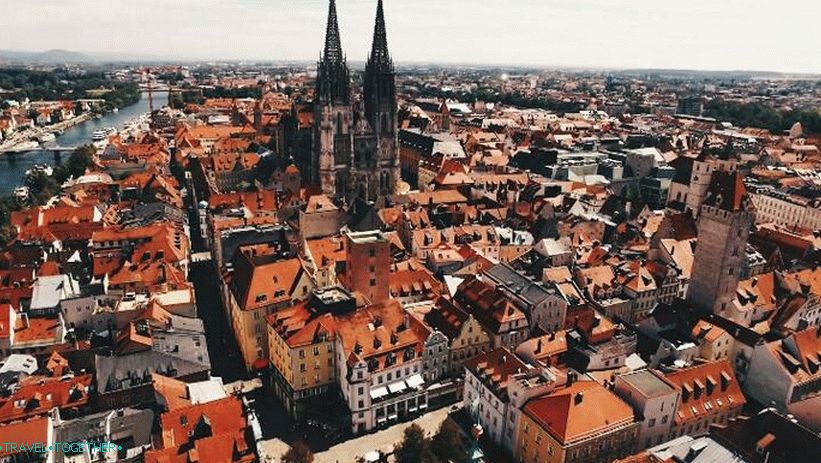 In terms of food, Regensburg has an excellent variety. places of traditional cuisine and beer snacks to European and international cuisine in high-end restaurants. Really a lot variety of pizzerias and Italian cuisine (almost more than traditional taverns). First of all, you should try famous Bavarian sausages with white mustard. The most famous place of this kind and the oldest (history of the institution more than 500 years old) is “Wurstkuchl”, located near the famous stone bridge.

Although Bavaria grows grapes and makes good wine, the main drink is beer. It is just here Excellent. Regensburg has old beer traditions and three functioning breweries that produce a variety of varieties of beer. I recommend to try a Weissbier beer (wheat beer), Bischofshof. Among the old beer taverns stand out -Alte Linde, Spital Garten (near the bridge), Kneitinger (on Arnulfsplatz).

Regensburg is one of the cultural centers of Bavaria. Among the events and activities can be identified: 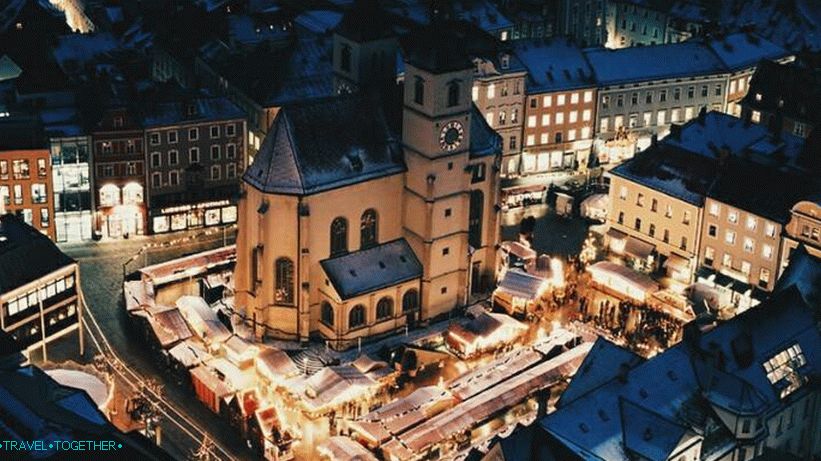 Regensburg is one of the most ancient cities in Germany, who has changed several names throughout history. Even before the Romans there was a Keltic settlement Radasbona. At the beginning Our ancient Roman fortress Castra Regina was founded, destroyed during the invasion of the Markoman in the 2nd century.

After Marcoman managed to drop the order Emperor Marcus Aurelius, here founded the Roman camp, which to 4 century turned into a fortified settlement.

After the fall of the Roman Empire Regensburg turned in the capital of the Bavarian Dukes Agilolfing (from 5 to 8 centuries). AT Regensburg became the largest religious center in the 9th century. only Bavaria, but the whole of Germany. In the 12th century Regensburg is turning into one of the richest cities. Germany, trading with Paris, Venice and Kievan Rus. In it time was a stone bridge, which was at that time masterpiece of engineering science. This bridge is a century older than Charles Bridge in Prague. 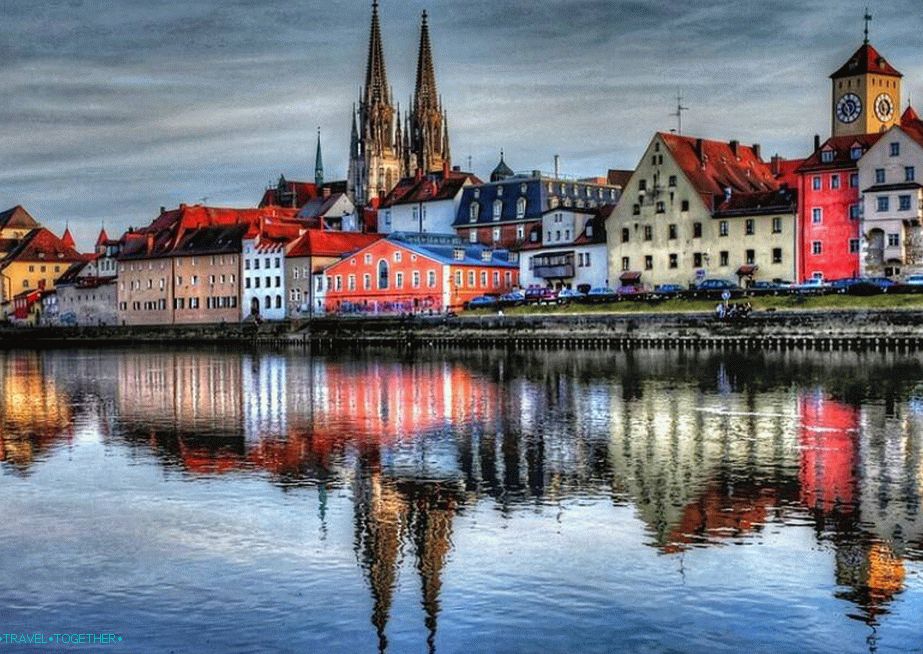 View of the Old city

At the beginning of the 13th cityRegensburg received a status imperial city. After almost a century of conflict in power Regensburg with church authority and the nearby duchy of Bavaria, the city has known economic decline. At the end of the 15th century, he was attached to Bavaria. However, he soon restored his independence, becoming with this a typical imperial city.

At the beginning of the 14th century, the city was surrounded by a stone wall with five gate and fortress towers. The remains of these walls are still visible pore, and the area bounded by these walls became call the old city. 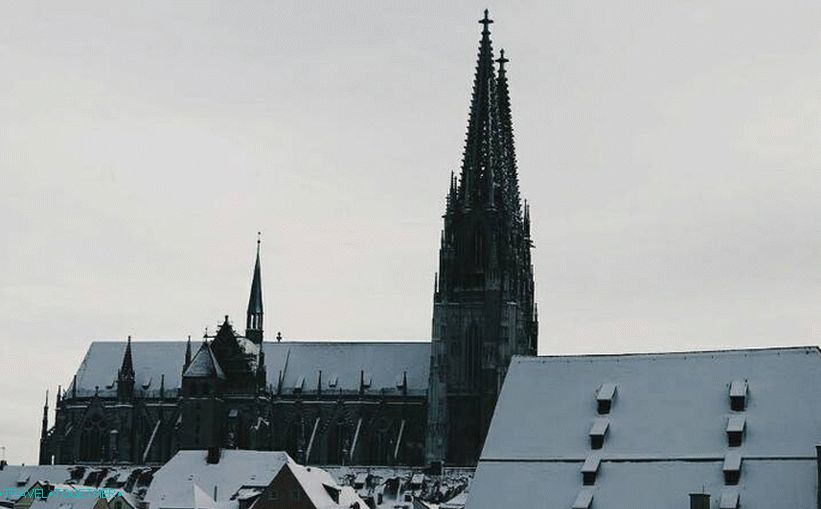 Regensburg in the winter

The 16th century became a turning point in the history of Regensburg. Emperor Rudolph II has a tradition to hold in it Reichstags, and since 1663 here is heldPermanent Reichstag Holy Roman Empire. However, economically it is not much reflected on his welfare.

In the 18th century, after the fall of the Holy Roman Empire, formed the principality of Regensburg. In 1809, Regensburg turned out to be almost in the center of Napoleonic wars, and in 1810 entered the the composition of the kingdom of Bavaria. From now to the present The city became a Bavarian province.

Regensburg was virtually unscathed during World War II. of war.

In the old city of Regensburg are about a half thousand buildings and structures that represent high historical value and span historical periods from the time of the Sacred The Roman Empire, the Middle Ages and to this day. Many architectural monuments are protected at the state level. On Old streets can meet almost all architectural styles, but dominates, of course, the German gothic and Italian motives. 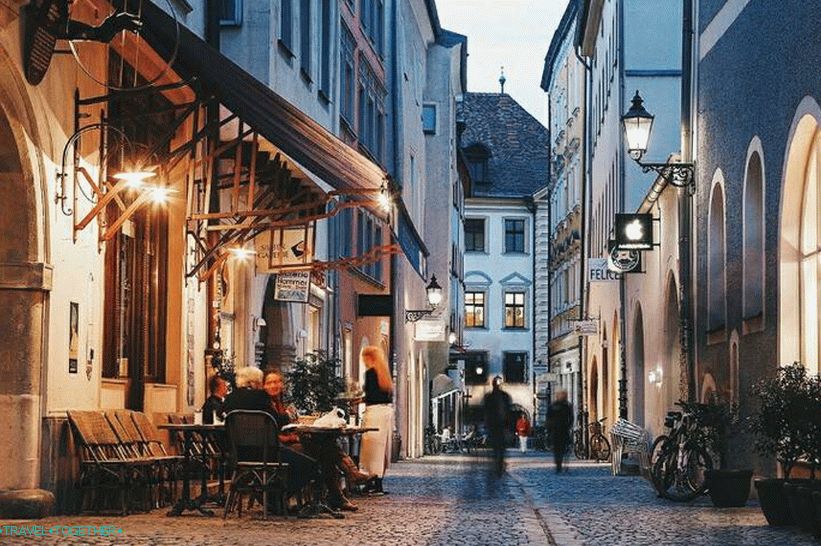 The main attraction of Regensburg is wonderful preserved center of a medieval city with an old cathedral cathedral and ancient stone bridge. The city has the largest preserved medieval historical center Germany. It is often called the “northernmost city of Italy” of – a large number of medieval merchant houses and Italian style towers, as well as cozy street cafes. 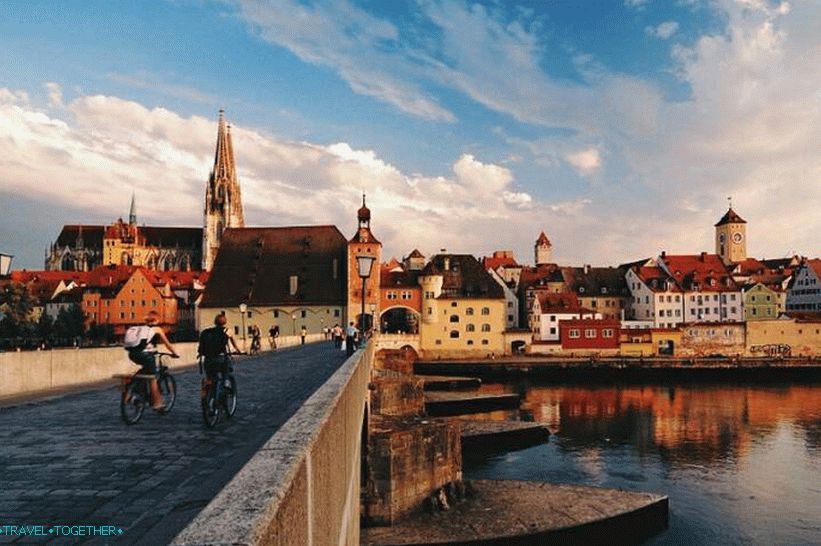 Stone Bridge – a masterpiece of medieval architecture in Germany. In addition to the cathedral is the most important the symbol of Regensburg and, of course, the basis for inclusion of the old city in the world heritage UNESCO.

The stone bridge was built in just 11 years between 1135 – 1146 years. In the Middle Ages, Regensburg for economic There was a constant crossing over the Danube. Almost 800 years, until 1935, it remained the only bridge that connected the two banks of the city.

The stone arches of the bridge are about 300 meters long. BUT the base of the bridge is sixteen feet (almost 5 meters). Initially, the bridge was guarded by three bridge towers. Today only one of them is preserved – Brückturm, on which there is an excellent viewing platform.

On stone to the bridge

A walk along the Stone Bridge is one of the must things that every tourist must do. This is an ancient The bridge served as a model for the famous Charles Bridge in Prague. AT currently traffic on the bridge is prohibited and he is only pedestrian. 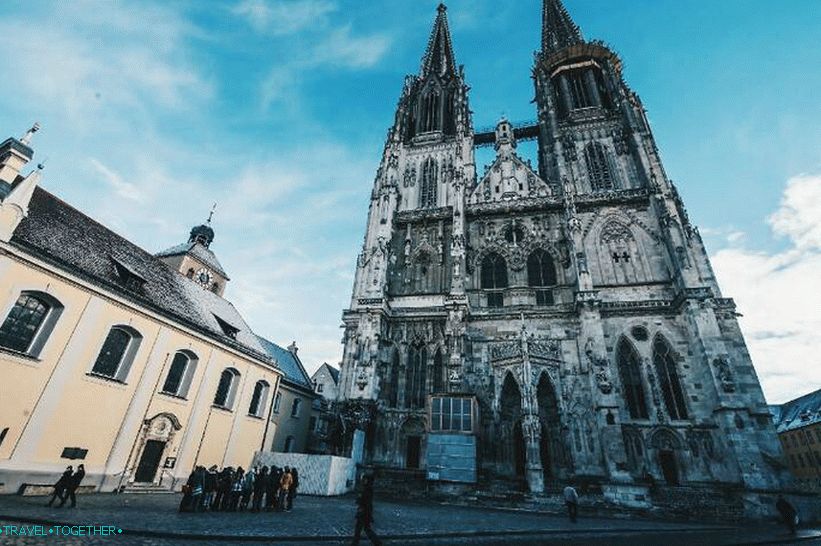 The main cathedral of Regensburg, named after St.. Petra, is one of the main masterpieces of the Gothic architecture in bavaria. In its architecture stand out high gothic towers that are visible from almost all points historical center. Colorful are also impressive. stained glass windows of 13-14 centuries, Gothic arches of the 15th century Chapel of All Saints, built in the middle of the 12th century by builders from northern Italy, evokes memories of Ravenna and can be visited with a guide. Cathedral St. Petra is the only pure Gothic cathedral in Bavaria 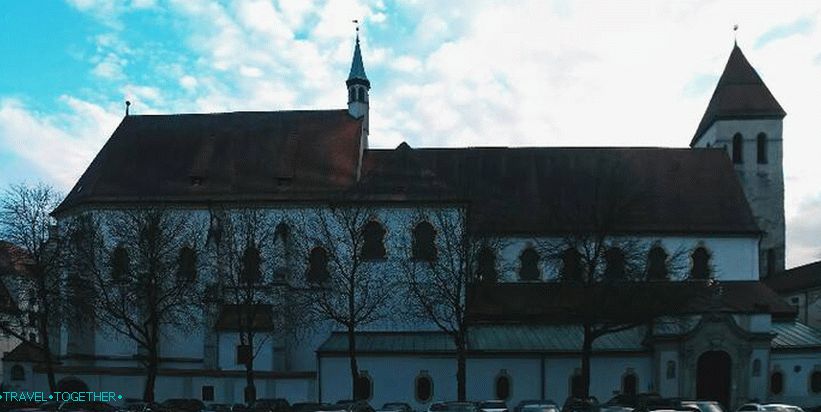 The old chapel is located on the square of the old market, where previously traded grain. Considered the oldest church in Bavaria. From 1747, the Annunciation and the Basilica its late gothic was rebuilt in style Bavarian rococo. The main rarity is the miraculous image Virgin Mary with Christ. It was a gift from Pope Benedict VIII Emperor Henry II in honor of his coronation in 1014.

On the western edge of the Old Town, not far from the city the park, there are towers of the Scottish church St. James. Former Benedictine Monastery in the 12th Century turned into water from the most important and big Roman Church buildings of Bavaria. Especially impressive is the entrance to church – “Schottenportal” with stunning ornaments, sculptures and bas-reliefs that depict doomsday, heaven and hell. 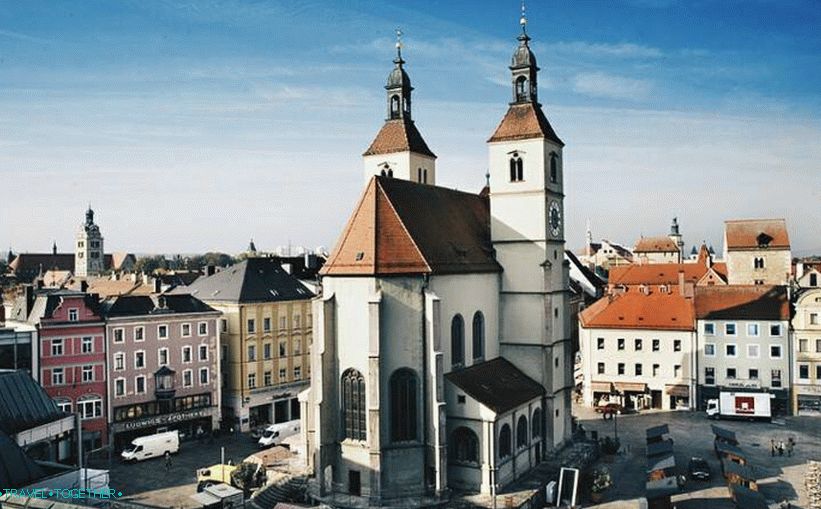 Evangelical church Neupfarrkirche is one of the most important Regensburg’s Protestant churches, located in the old Jewish quarter. The building of the church with a facade in the style of the era Renaissance and Late Gothic elements, as well as two High Gothic towers stand out in the architecture of the old cities.

Dominican church on Albertus-Magnus-Platz is one of The best examples are early Gothic in Germany. Built in the 13th century. It stands out for simplicity of form and interior. 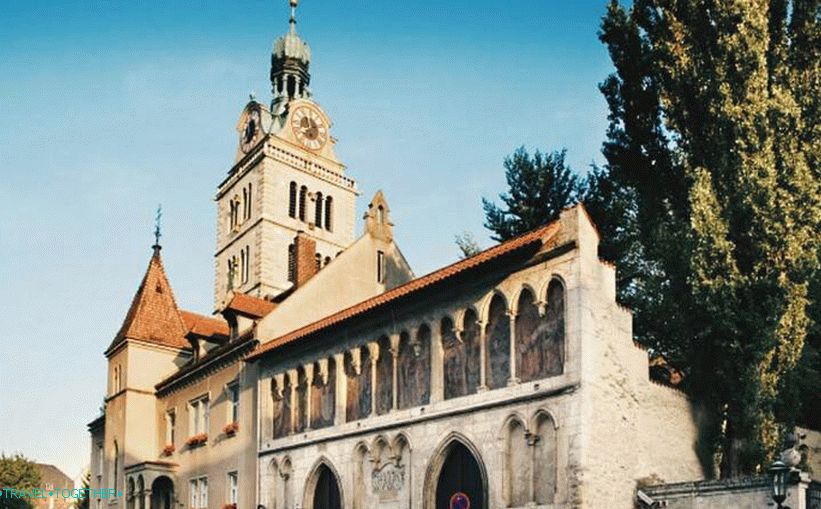 Basilica of sv. Emmerama was built in the eighth century, rebuilt in baroque style in the 18th century. Former benedictine the monastery was one of the most important monasteries in bavaria and today is one of the main churches of Regensburg. 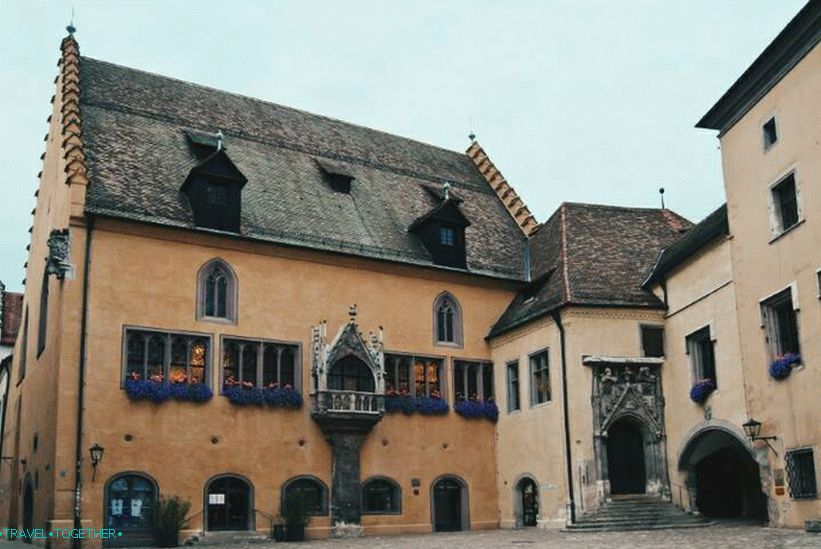 One of the most important buildings in the historic center of Regensburg – Old Town Hall with an impressive tower. It is also one of the oldest civil buildings built in the 13th century. Town Hall is located on the central market square. Combines the styles of gothic and baroque.

In the Old Town Hall building you can visit the historic hall, in which was held by the reichstag of the Holy Roman Empire, and there is a medieval torture chamber. This hall was one of the main centers of the Empire. 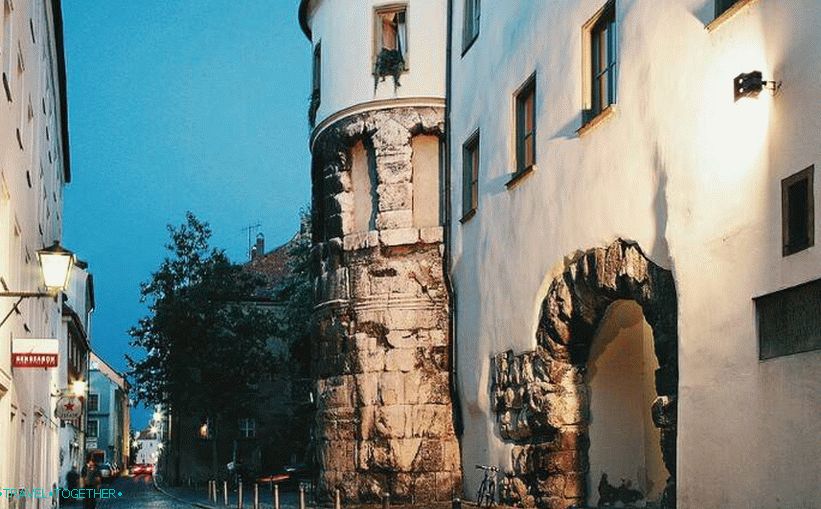 Port Praetoria is considered one of the oldest surviving buildings in Regensburg with an age of almost 2,000 years. In Roman times here was the northern entrance to the city. Parts of the roman wall built into a medieval building.

In the southern part of the old Regensburg, not far from the main railway station, is located the princely residence Schloss Thurn und Taxis. This is a magnificent complex of buildings of the former Benedictine monastery. The oldest buildings date back to the 8th century. Thus, the former monastery is one of The oldest and most important monasteries of Bavaria.

The golden tower in the old town in the second half 13th century. Rich families built such towers as a symbol status. The more important the family, the higher the tower was. Residential tall tower over 50 meters beautifully towers over the city roofs. The impressive courtyard is open to the public at any time.

From historical buildings should pay attention to the house Goliath (Goliathhaus), built in the 13th century. It is believed that the picture on the building was painted around 1573 and depicts a battle of David and Goliath. Dominated in the south parts of the old town on the foundations of the old roman fortress.

Near the bridge is also located interesting. historic building of the early 17th century – Salt House, which previously traded in salt.

These sights of Regensburg are not limited. AT The old city among the medieval streets can still be found interesting!

We offer a route on the most important and interesting sights of Regensburg. Please note that the historical center of the city is very compact and the route is sufficient simple for any tourist.