Ravenna (Italy) – the most detailed information about the city with photos. The main attractions of Ravenna with a description, guides and cards.

Ravenna – a city in the north-east. Italy in the region. Emilia-Romagna. Located on a lowland plain near the confluence Ronco and Monte are ten kilometers from the Adriatic Sea, with which is connected by a channel. Ravenna – a city with an interesting and rich history, a real treasure trove of art, history and culture. Eight late antiquity sights included in the list UNESCO World Heritage sites.

Ravenna is one of the largest cities in the region. Emilia-Romagna. It is conveniently located between Bologna and San Marino, as well as near Florence and the Adriatic resorts that makes it a very popular tourist destination. But unique Ravenna make the sights of the period ancient Byzantium, which are among the best preserved in Italy. In addition, the city is known as the place of death of the legendary Dante Alighieri is one of the most mysterious poets of the Middle Ages, founder of the modern Italian language.

The province of Ravenna is located in the east of the Emilia-Romagna region 10 km from the coast of the Adriatic Sea. The city connects with the sea cananyano channel. The province is located on the Padansky plain in its lowland part. 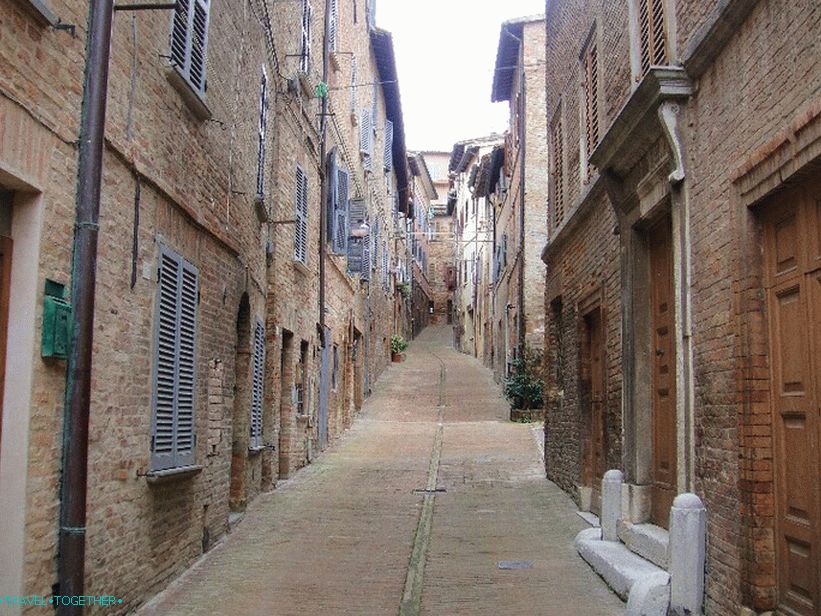 Ravenna is an ancient city with a rich and complex history. After the collapse of the Roman Empire from the beginning of the 5th century the city was the capital Western Roman Empire, later the state of the Ostrogoths and the kingdom Lombards.

Initially, the tribes of the Etruscans and umber Part of the Roman Empire Ravenna became in the 2nd century BC. Under Octavian Augusta, a port was built here, which later grew in town. In 402, after the siege by the Visigoths Mediolan (Milan), Ravenna became the capital of the Western Roman Empire. In 476, the empire ceased to exist. Also, this date is considered the end of the period. Antiquity. 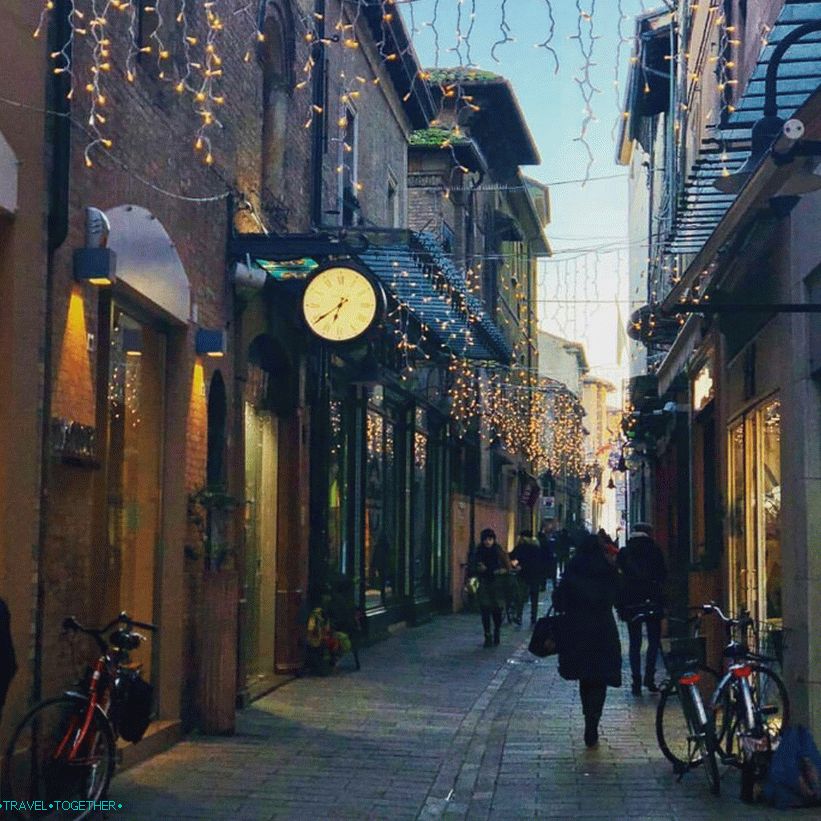 At the end of the 5th century, Ravenna was conquered by the Ostrogoth King Theodoric, who made the city the capital of his state. But the state Ostrogoths did not last long. Already in 540, Ravenna became province of Byzantium. In the middle of the 8th century the city was conquered Lombards. Although this kingdom also existed for long. AT mid-9th century Ravenna came under the control of the Pope.

There is a small airport in the town of Forli, 20 km from Ravenna, which serves several local destinations. Large The airports are located in Bologna, Venice and Florence. Easy Get to the city and by car on the A14 motorway. Also there is a railway station, the main directions of which Bologna and Rimini.

Ravenna is a magnificent late sight Antiquities, which are UNESCO World Heritage sites, ancient churches and basilicas, old streets and wide squares. But not only historical and cultural monuments are famous for this city. Beside Adriatic resorts are located that can offer great stay. 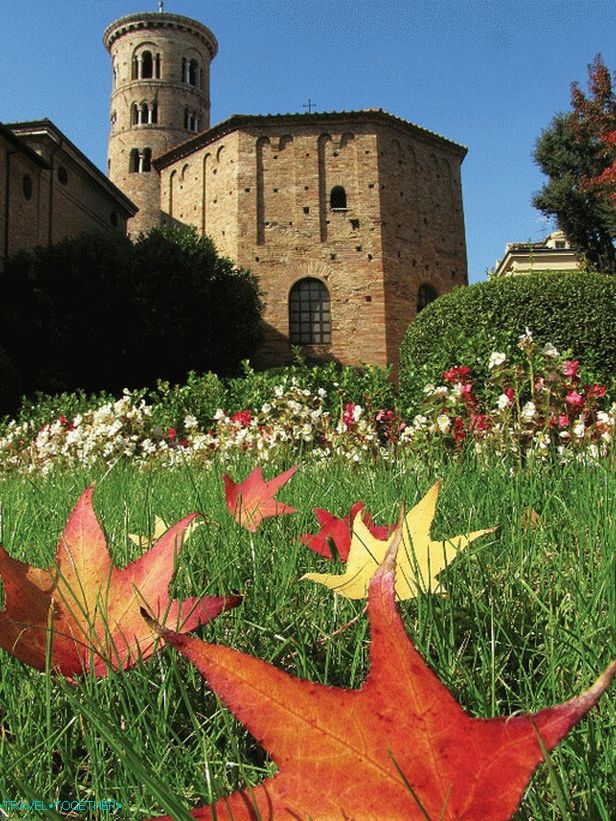 Neon Baptistery (it is also often called Orthodox) – the most ancient building, standing in Ravenna, and extremely important religious object. The baptistery was built in the 5th century on the territory complex of roman terms. The structure has an octagonal design and pretty simple look. 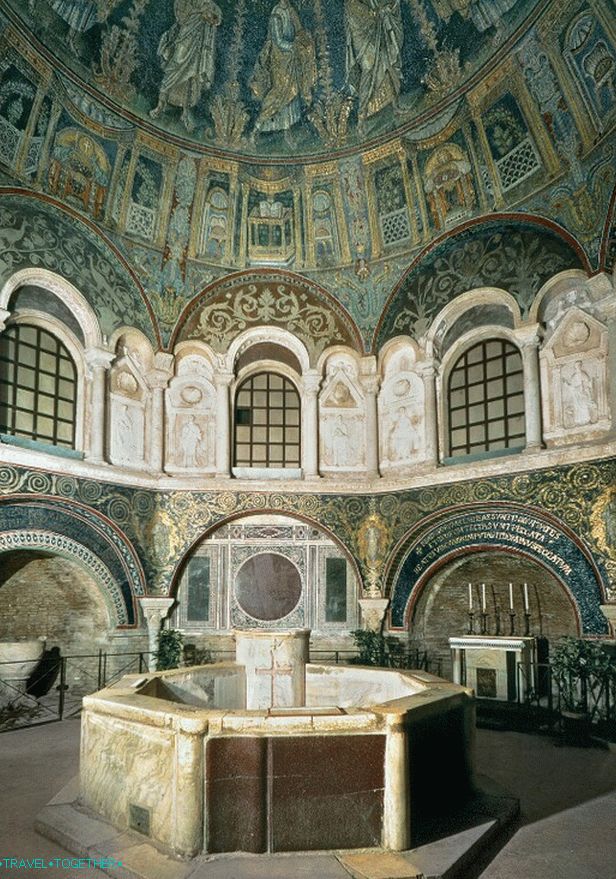 But the main treasure is hidden inside, where is an amazing a series of ancient Byzantine colored mosaics depicting religious scenes such as the baptism of Christ and the procession of the twelve apostles 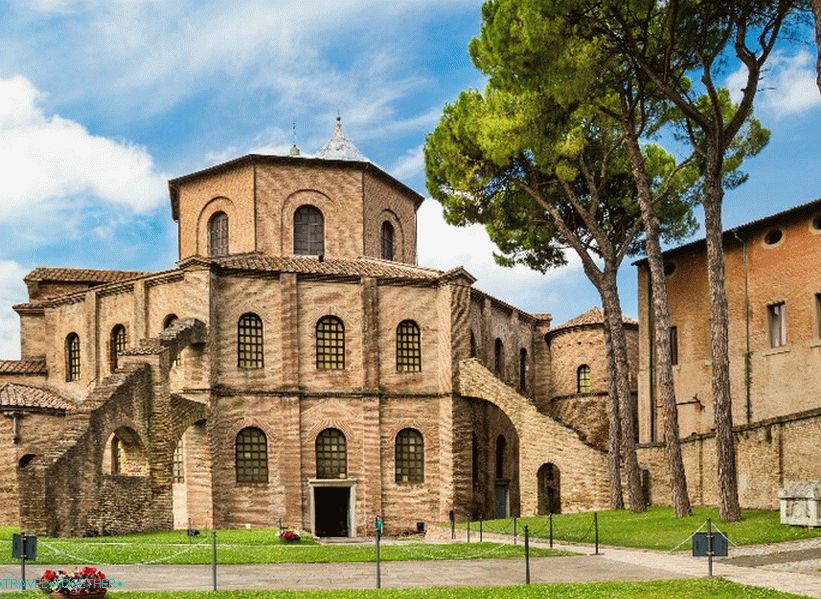 The Basilica of San Vitale is another ancient structure located near the baptistery of Neon. The construction of the church dates back to first half of the 6th century. The basilica has a similar external and architecture in which a large octagonal stands out central dome The interior of San Vitale has some amazing mosaics and decorations that are considered one of the best examples Byzantine art in Italy. 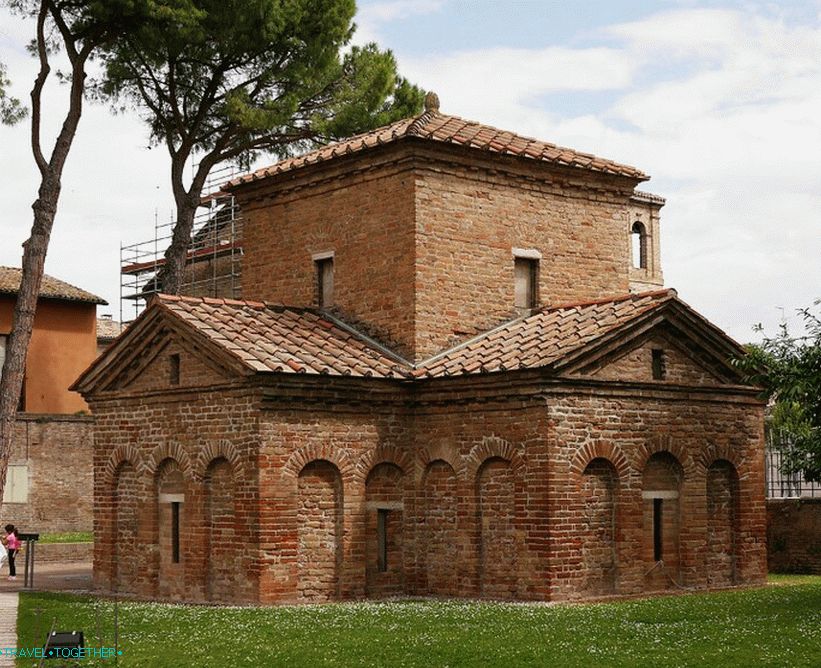 Galla Placidia’s Mausoleum is another World Heritage Site. UNESCO in Ravenna, built in the 40s of the 5th century. This is a structure simple on the outside, offering great interior pieces, which are considered one of the best preserved and artistically perfect examples of mosaics in Italy. The mausoleum was created for sisters of the emperor of the Western Roman Empire, Honorius, but in the end her buried in Rome. 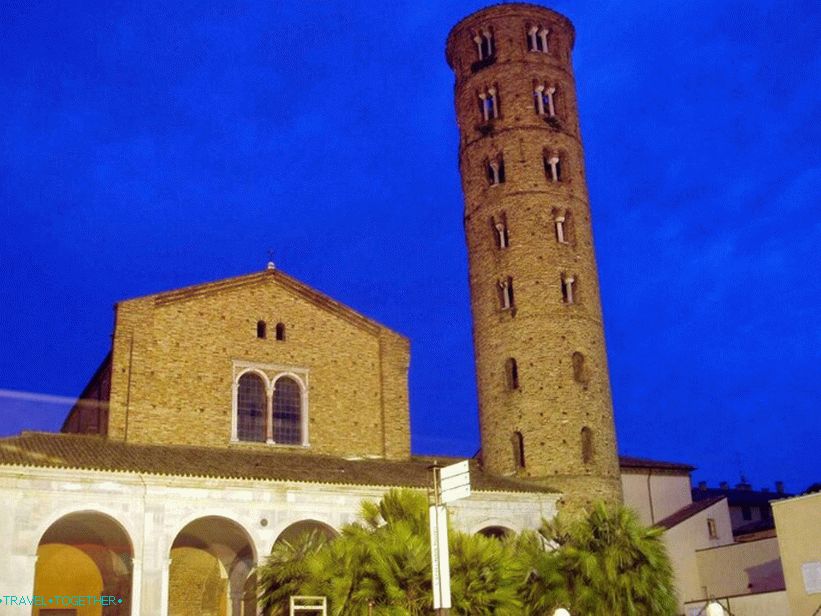 The Basilica of Sant’Apollinare-Nuovo was built by the king of the Ostrogoths Theodoric. The church is located in the eastern part of the old town, easily reached by foot. To the right of the building is a large the bell tower and the front entrance are decorated with stone arches. Inside The basilica boasts magnificent mosaic decoration documenting stylistic, iconographic and ideological the evolution of Byzantine wall mosaics from the age of Theodoric to Justiniana. The mosaics depict scenes from the New Testament. 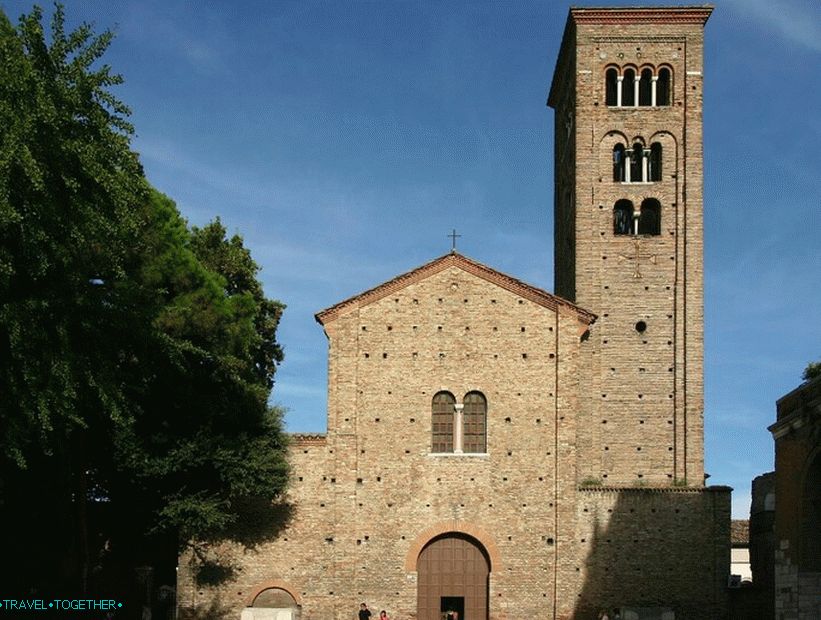 Basilica di San Francesco is located between Neon the Baptistery and the Basilica of San Apollinare. The church was built at 9 century, and the bell tower in the 10th century. Although the basilica interior quite simple, it attracts visitors to a mysterious crypt and tomb of the bishop. 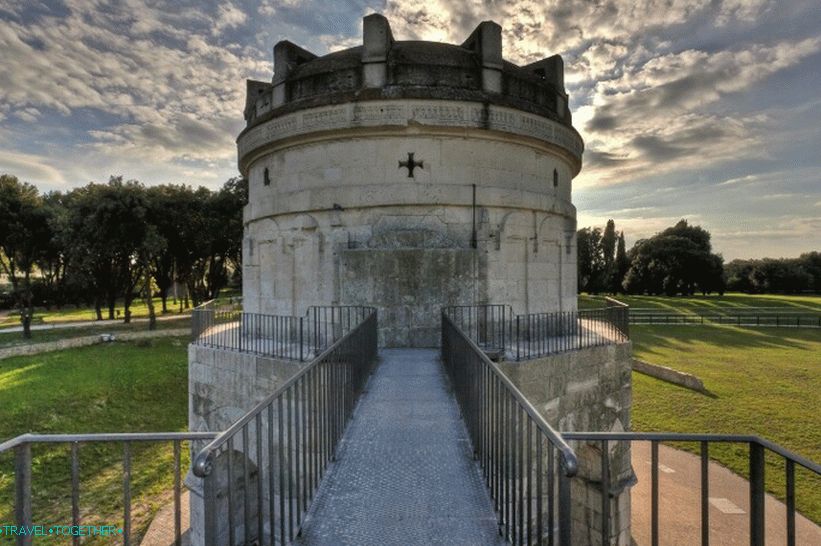 The Mausoleum of Theodoric – the burial place of the king of the Ostrogoths, who chose Ravenna stronghold of his kingdom. This building with 1500 years of history located in the eponymous park. The roof of this structures made of Istrian stone. Tomb interior pretty simple. 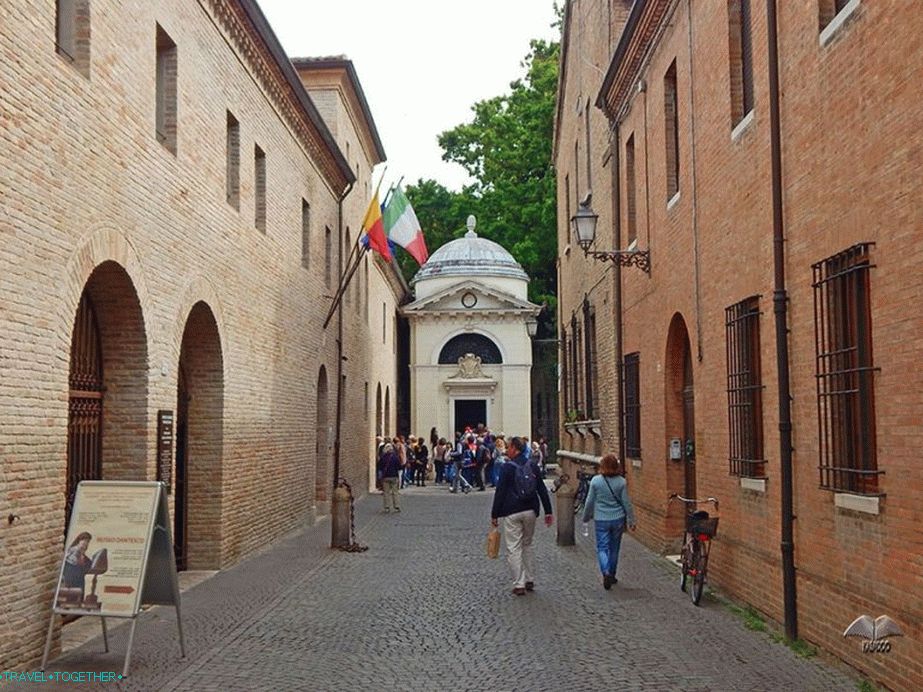 Dante’s Tomb is a simple marble structure in which kept the remains of one of the most legendary poets of Italy. The mausoleum was built much later than the death of Alighieri. 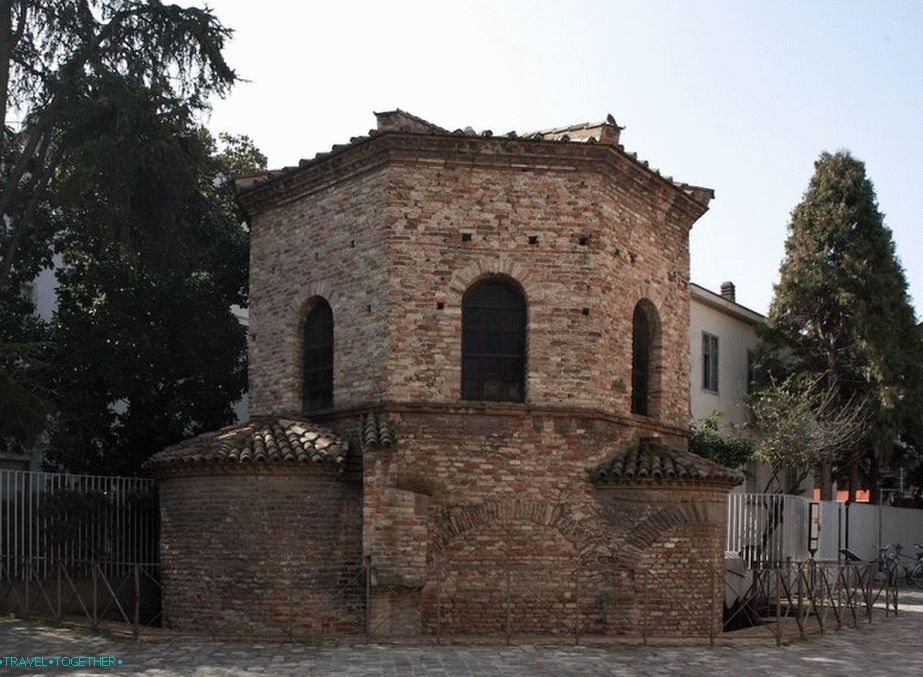 The Arian baptistery was built at the turn of the 5-6 centuries. Theodoric. This inconspicuous exterior building is located in close to Piazza del Popolo, next to Chiesa Dullo-Duto-Santo Church. Inside the baptistery is beautifully decorated mosaic. Particularly impressive is the very detailed ceiling mosaic, depicting the baptism of Jesus Christ. 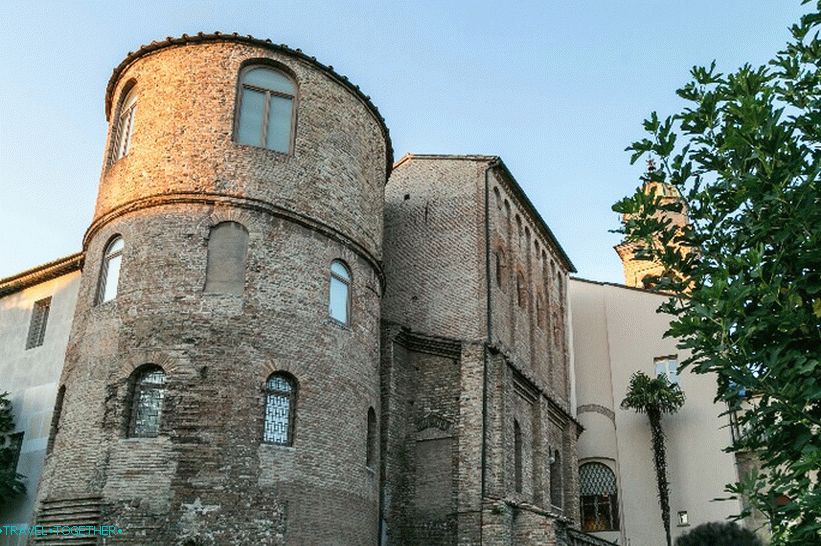 The Archbishop’s Chapel – the chapel of the Equal Bishops, built at the beginning of the 6th century under Theodoric. The interior is beautifully decorated mosaic. 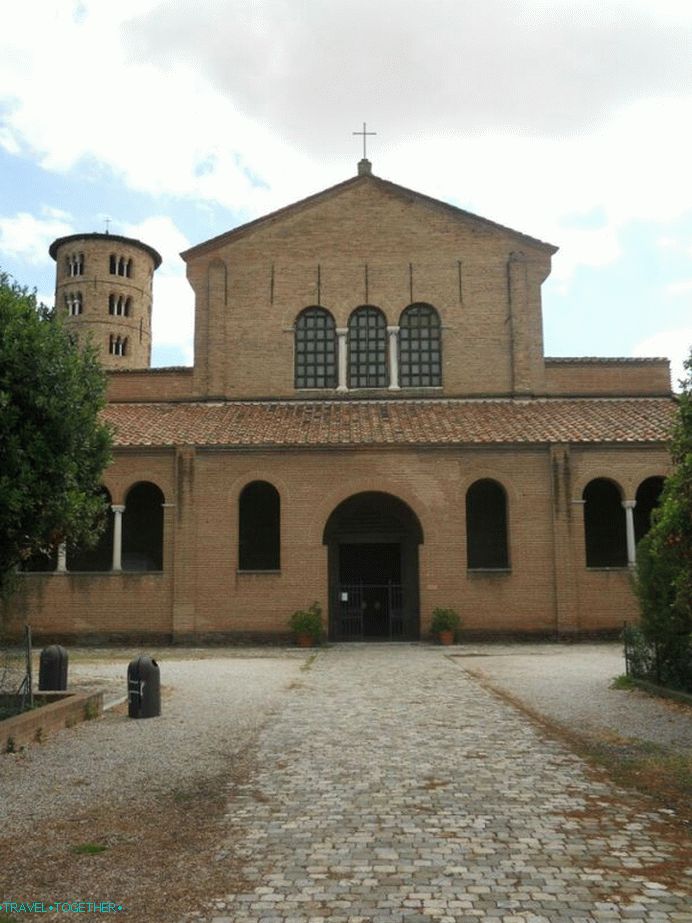 Sant’Apollinare in Classe – 6th century basilica, located behind outside the old city. Was built over the grave of the first Equal Bishop of St. Apollinaris. Is a masterpiece Byzantine art. The interior of the church is decorated with mosaics of the period. Justiniana.

What else can be found in Ravenna:

Ravenna on the map of Italy