Pula (Croatia) – the most detailed information about the city with photos. The main attractions of Pula are with descriptions, guides and cards.

Pula is a city in Croatia, the largest city in Istria. Unspoken the capital of this tourist region located on the western tip of the peninsula on the Adriatic coast. Pula is largest tourist, industrial and transport center Istrian coast, attracting many tourists clean sea and beaches, wonderful sights and history, gastronomic delicacies and other possibilities for Excellent recreation and tourism.

Pula is a city representing a unique combination of history and modernity, beautiful nature and developed infrastructure. it strip beaches, old streets and historical monuments, it is the smell of the sea and coves full of yachts and fishing boats, these are cozy restaurants with delicious food. Despite tourist popularity, Pula has kept the charm of a small provincial town, and historical monuments, which were built in Roman times, allow you to touch The rich historical and cultural heritage of this ancient cities. 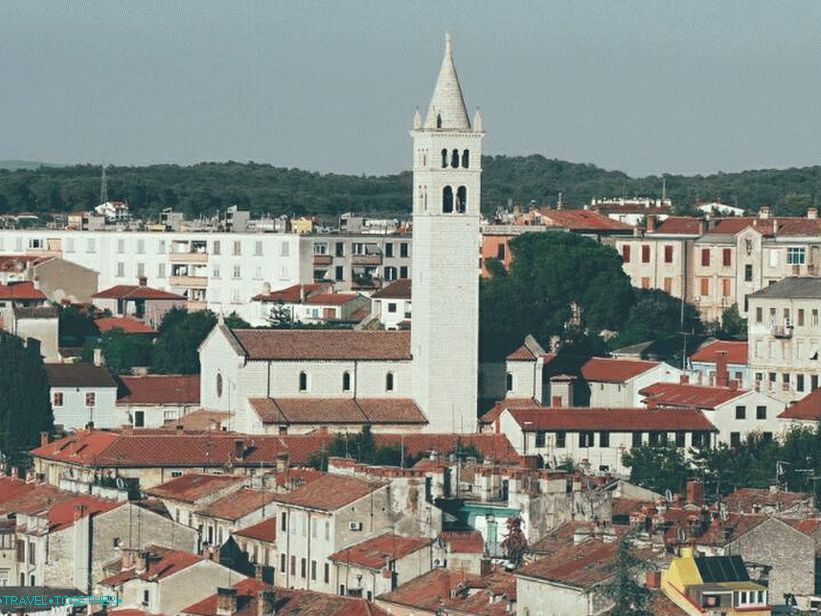 It is believed that Pula was founded by the ancient Greeks and was one of the first colonies of Hellas in the North Adriatic. Some find mentions of the city in the famous legend “of the golden rune and argonautah “. From this it turns out that the story of Pula is 3000 years old.

The heyday of the city was associated with the times of Roman rule. empire in 1-3 century AD. It was under the Romans that Pula becomes The largest and most important center of Istria. At this time there were built the most important monuments of antiquity, located on the territory of Croatia. Roman Pula had all the most important achievements of antiquity. Here functioned plumbing, forum, theaters and temples were built. Many houses were decorated with marble and beautiful mosaic. The city was surrounded by a wall, destroyed in the 19th century. 10 gates led to the city. Until our time, managed to save some of them.

After the fall of the Roman Empire from the 5th century to the mid-12th century, Pula, like the whole peninsula, was ruled by the Ostrogoths, the Franks, Byzantines and Slavs, Lombards. From 1150 until the end of the 18th century, Pula belonged to Venice. The Venetian Republic owned the city until its fall. During the Venetian rule the city was occupied several times. enemy troops because the city was on the front line in time of conflict for power over the Adriatic.

After the Napoleonic Wars, Pula becomes part of Austria-Hungary. After World War I, the city became part of Italy, and after World War II – Yugoslavia. With the breakup of Yugoslavia in 1991, Pula – part of Croatia.

The city of Pula has an international airport located just 5 kilometers from the city. Another nearest international The airport is located in the capital of Croatia – Zagreb. Pula bound bus service to the neighboring cities of Italy and Slovenia. Also can be reached by sea, for example, from Venice.

One of the most important tourist attractions is shopping. WITH this in Pula is all right. You can make purchases on Square Portarata, Forum and Street Sergijevaca. Here there are many shops from clothes and shoes to jewelry products and food. On the street Kandlerova can be found interesting souvenirs. Also trade shops can be found on the following streets: Giardinima, Laginjinoj, Cisccutijevoj, Flanatičkoj, Istarskoj. If you want to buy traditional Istrian products, then you direct road to the local market. Here are meat and fish shops, restaurants and bakeries.

Also in Pula there are several supermarkets and shopping centers:

From souvenirs magnets, bags and cups are in demand, the sights of Pula in miniature, olive oil and Istrian lavender, local wine and truffles, souvenir jugs.

Restaurants Pula offer a variety of delicious dishes. Rich the history and multiculturalism of the region has created a unique cuisine with influenced by the Italian, Mediterranean, Austrian and Slavic the kitchen.

First of all you need to try fish dishes and seafood – oysters, scallops, grilled fish, sardines, risotto from cuttlefish, etc. Very tasty local pasta and dishes from potatoes – fuzha, dumplings, ravioli, etc. From the delicacies should try dishes with truffles, prshut. From traditional dishes also thick soup with beans is popular. From alcoholic beverages should pay attention to Istrian wines. 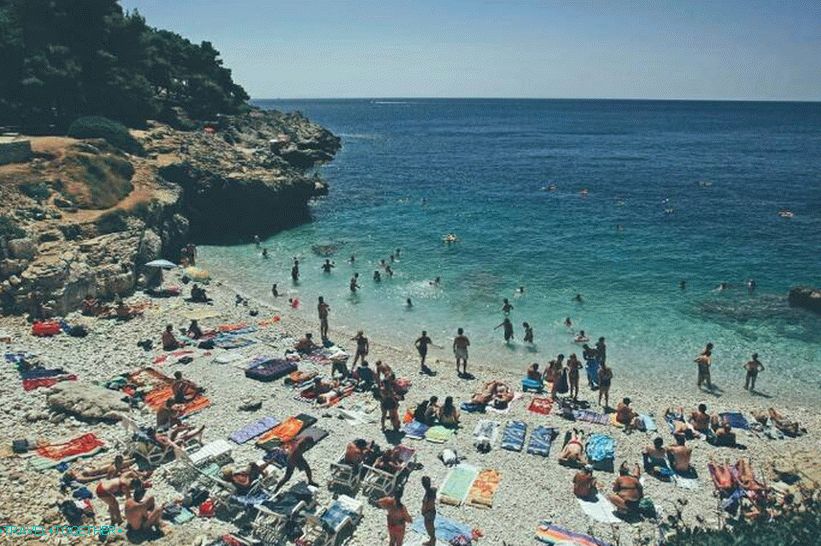 There are no beaches in Pula Bay. Most equipped beaches located in the southern part of the city. North of Cape Proštine can find some wild beaches. The largest beaches of Pyly are marked on maps below.

Pula has many interesting sights preserved. some of which date back to antiquity. Arena – the main attraction of Pula and the symbol of the city. it a large amphitheater built in the 1st century in the time of Vespasian for gladiator fights simultaneously with the Colosseum. Considered one of the 6 The largest amphitheater of Roman times. Pula Arena accommodates more 20 thousand spectators. This is a large oval building with a length of 130 meters. and 100 meters wide, built of limestone. Currently Arena is used for summer activities. 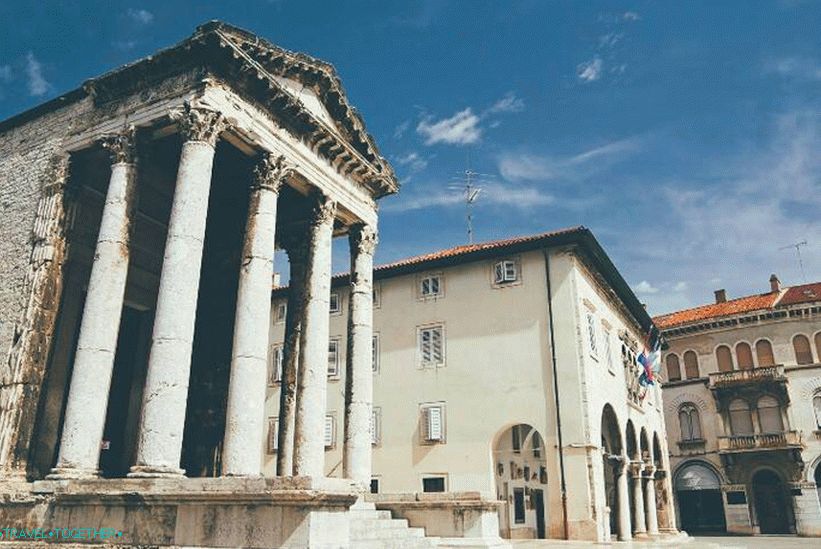 The Temple of Augustus is another landmark of Antiquity. An ancient temple with two thousand years of history, built in honor of Emperor Augustus and the Goddess Roma. After the collapse of the empire the temple was turned into a church, then was a warehouse of wheat. During the second The world was destroyed and rebuilt in 1947. Here now there is a small museum. The Sergievtsev Arch of Triumph – an antique arch in the Corinthian style, erected in the 30s BC in honor of the influential Pula families. Adjacent to the city gates. Double gates – antique gates with a section of the fortress wall, built in the 2-3rd century AD. Gates are two-arched entrances through which one could get into city. 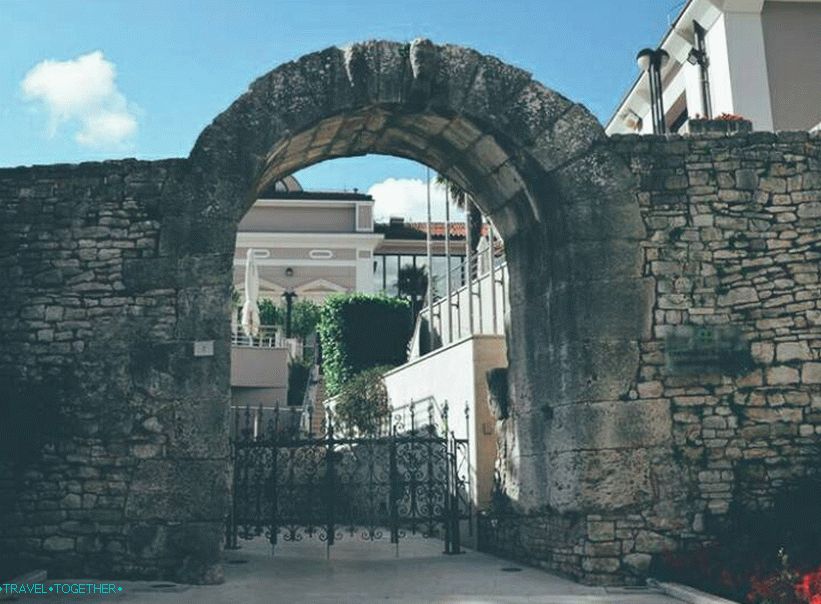 The gate of Hercules is another ancient gate located between two medieval towers. Built of hewn stone. At the top is carved the head of Hercules, which can hardly be make out.

In the western part of the city is the central square ancient and medieval Pula – Forum. The history of the square goes back to ad. Here were located the most important buildings of the ancient cities – temples, administrative and business buildings. Of Temples survived only the temple of Augustus. 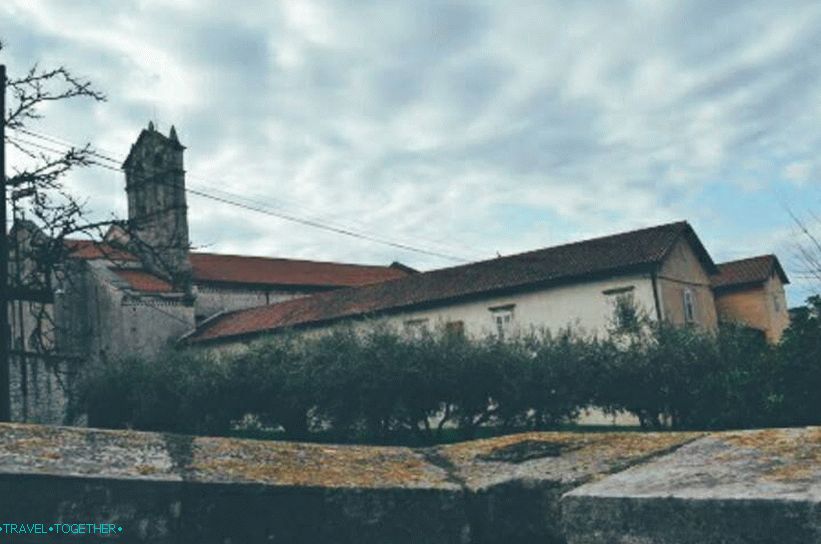 The Franciscan Monastery is located near the Forum. Based in the 14th century. The monastery church of the early 14th century contains Late creative and gothic elements.

The cathedral is the main temple of Pula, located next to the main pedestrian street of the city leading to the Forum. Temple erected in the place where the first Christians gathered. Church was built in the 5th century. Despite damage from fires and rebuilding retained structure and some ancient elements. Chapel of sv. Maria Formosa – a small chapel of the 6th century, once formerly part of the Benedictine abbey. Built in Byzantine style.

Church of sv. Nicholas – Serbian Orthodox Church. Building built in the second half of the 6th century in the Byzantine style. On a high hill is located the Venetian fortress. Fortress was restored in the 60s of the 20th century. Now located here Historical Museum of Istria. 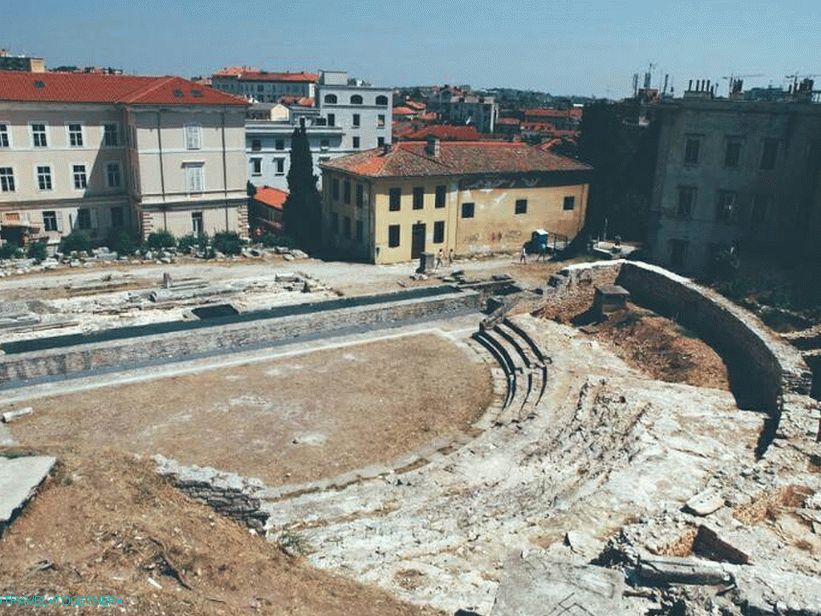 The Roman Theater is the ruins of an ancient theater located near the hill Kastel.

The main sights of Pula on the map

Pula on a map of Croatia