Poznan (Poland) – detailed information about the city with photos. The main attractions of Poznan are with descriptions, guides and cards.

Poznan – a city in Poland, located on the Warta River in the west countries, the administrative center of the Greater Poland Voivodeship. it a city with a rich history, numerous historical monuments and culture, ancient architecture, which will appeal to many travelers. The first mention of the settlement dates back to the 10th century. Already in the 13th century in Poznan, a fortress with a royal castle was built — the oldest the residence of the Polish kings. Most of the 19th century the city was capital of the Grand Duchy of Poznan, which was part of Prussia (Germany). In 1919, Poznan returned to Poland. In World War II, the city was badly damaged by bombing. Anglo-American aviation. Was liberated by Soviet troops in February 1945. 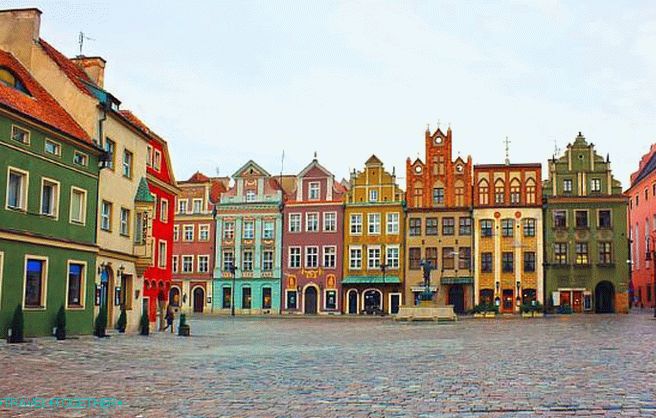 It includes the Old Town, as well as the area to the north of the street. Queen Jadwiga and st. Commodity, south of st. North, between railway line and the river Warta, as well as the southern part of the Tumsky Islands.

If you want to try the national Polish cuisine We recommend the following restaurants:

For lovers of museums and historical exhibitions in Poznan also have something to do. The city has more than a dozen different museums and exhibitions. Here are the most interesting ones:

In Poznan there are a large number of hotels of different price. categories, you can also rent an apartment. Therefore, problems with the choice there should be no place to stay. Prices for hotels in Poznan: Tumski Island in Poznan (Ostrów Tumski) – historical Part of city. The island on the one hand is separated r. Warta, and on the other – Tsybina. The island is connected to the left bank by the Boleslav the Brave bridge, with right – Mieszka bridge. The architectural ensemble of the island is included in list of monuments of Poland.

Cathedral of Saints Peter and Paul in Poznan (Bazylika archikatedralna Świętych Apostołów Piotra i Pawła) – cathedral The cathedral, founded in the 10th century, is the oldest in the country. Being the first Cathedral in Poland, he received as his patron saint apostle peter. Church of the Holy Cross (Kościół więtego Krzyża) – neo-gothic church of the evangelical church built at the end of the 19th century by project Bernarda Belowa. Old Market (Stary Rynek) – Old Square in the historical center of Poznan. Square was founded in the middle of 13 century. In the center of the market is the town hall. Used to be here cloth rows, benches, bread and meat shops. Is the third the largest market in Poland and one of the largest in Europe. Performs the function of the market today. Imperial Castle in Poznan (Zamek Cesarski) – residence for the last German emperor and king of Prussia Wilhelm II. Built in 1910. The castle was erected in shape irregular polygon in neo-romanes style. Located in the southern part of the city. The main building consisted of two wings – Western, which was the largest and was intended for housing, as well as eastern, in which there were rooms for meetings and receptions. The first floor was occupied by the apartments of the imperial couple. and a chapel. The Imperial Castle is a large structure, comprising 585 premises with a total area of ​​25,127 square meters. Royal Castle in Poznan (Zamek Królewski) – royal residence, the oldest surviving in Poland. Castle was erected by King Premysl II, then it was repeatedly rebuilt. The castle was partially destroyed during the Northern War. and fell into decline. Restored at the end of the XVIII century. Destroyed again in 1945. Rebuilt and restored in the years 1958-59 and 2010-2013 years

Map with the route through the oldest part of the city (heart Medieval City) – Royal Route, Old Town and Market Square, Tumsky Island. Here are the most interesting sights and places of poznan.

Map with the route through the oldest part of the city (heart Medieval City) – Royal Route, Old Town and Market Square, Tumsky Island. Here are the most interesting sights and places of poznan.

Poznan on a map of Poland