Potsdam, Germany: the most detailed and comprehensive guide to the city, the main attractions of Potsdam with photos and descriptions, location on the map.

Potsdam – a city in eastern Germany, located 25 km southwest of Berlin. The capital of the federal state of Brandenburg has passed amazing transformation from a small garrison town to royal capital and became one of the main architectural gems Europe. Potsdam is 17 magnificent palaces with beautiful parks, masterpieces of architecture and culture that are listed UNESCO World Heritage sites.

Potsdam is located on the river Havel on the moraine plain rich rivers and lakes. The highest point of the city – 114 m. Green plantings occupy about 3/4 of the city. Climate – temperate with maritime influence. The summer is warm, the winter is quite mild with small frosts. 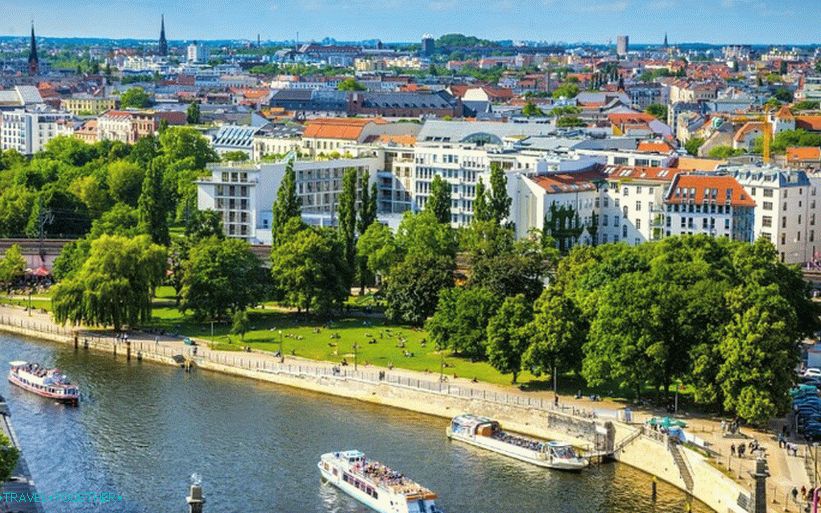 Potsdam is one of the most beautiful and visited cities. Germany, and the location near Berlin makes it very popular destination for day trips.

Potsdam was founded around the 10th century on the site of the Slavic settlements when Emperor Otto III bestowed these lands on the abbey. AT 1345 received the city law. In 1416 the city becomes part of the Hohenzollern possessions. But until the 16th century, Potsdam remained small trading settlement. During the Thirty Years War was significantly destroyed.

Everything changed in 1660, when the Duke of Prussia Frederick Wilhelm I chose the town as his hunting residence. Later, the city became the residence of the Prussian kings. Most magnificent palaces were built under Frederick the Great. 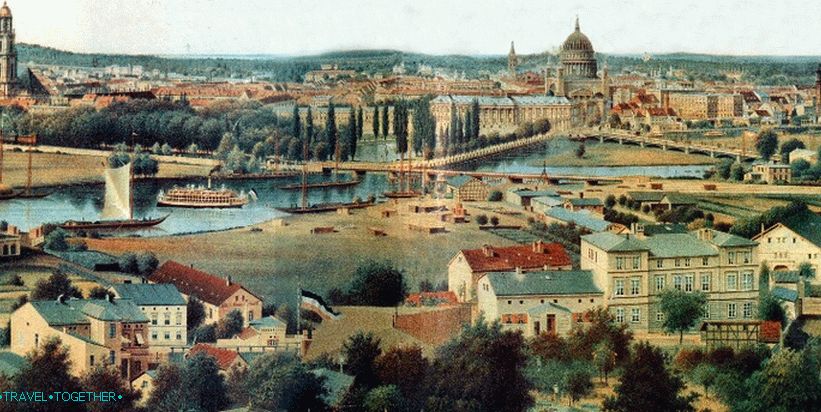 Potsdam in the 19th century

The city has become the second capital of Germany. Housed here Supreme Court and many government agencies.

During the Second World War, the historic center of Potsdam was significantly destroyed by the bombing of the British and the americans.

Potsdam is actually a suburb of Berlin. The city is located at 25 km west of the capital of Germany. From Berlin to Potsdam can be reached on the S-Bahn line S7. Tickets for the BC area of ​​Berlin will be valid in Potsdam 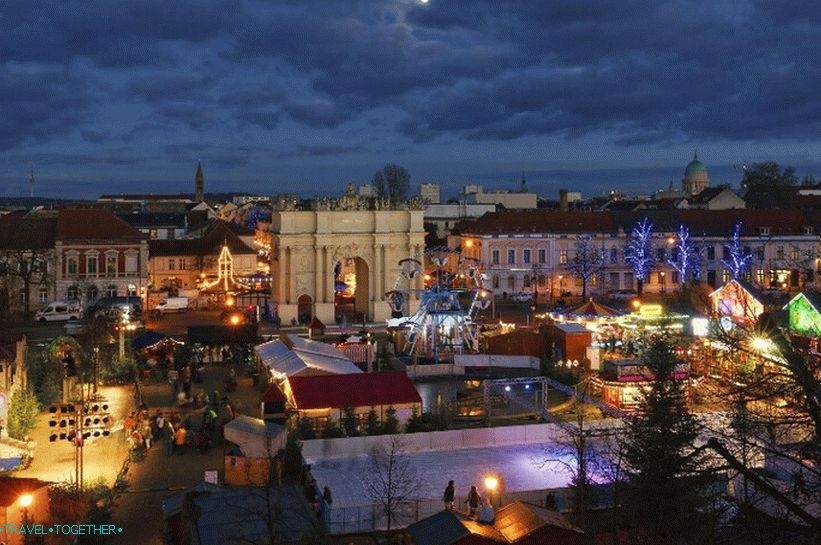 Two Berlin airports are located near Potsdam. TO The city is adjacent to the A10 motorway. Public system transport is a bit confusing and is represented by trams and by buses. Public transport is zonal and enters Berlin’s transport system. Tickets can be bought on every tram. and bus. Many new ticket machines accept cards, coins. and bills.

The most important monuments of culture and architecture of Potsdam made to the list of UNESCO World Heritage Sites. Currently This status has more than 100 attractions that located on an area of ​​500 hectares. Cultural landscape of Potsdam is one of the largest in Germany and all of Europe.

17 impressive palaces with gardens are top the sights of Potsdam. Sanssouci – the palace complex, the pearl of Potsdam and the beloved the residence of Frederick the Great. The castle was built in the middle of the 18th century. and is considered the most significant architectural structure of the German rococo. Adjacent to the castle are beautiful terraced gardens with fountains, greenhouse and roman baths. Entrance to the palace is paid.

The new palace is an architectural masterpiece built in the western parts of Sanssouci. It is the largest building of the complex and one of the largest palaces of Potsdam, whose interiors are striking luxury. New Palace – one of the most significant monuments of architecture German baroque. 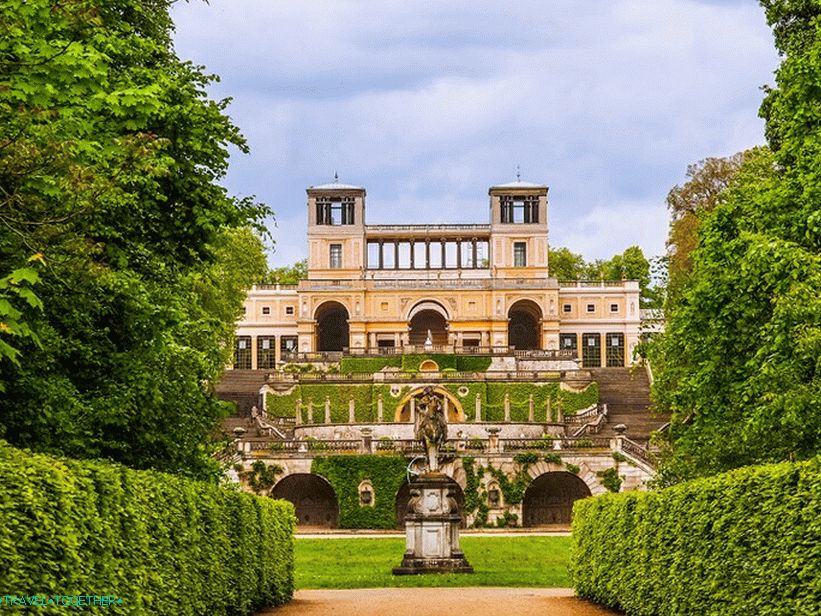 Palace-greenhouse – a huge palace in the style of the late Renaissance, located in the park Sanssouci. It is interesting that its length is 300 meters and in this parameter it exceeds the length of the New Palace. This palace was completed in 1860 by Friedrich Wilhelm IV. Your the appearance of the palace-greenhouse copied from many famous buildings Florence: Villa Medici, Uffizi and others. The wings of the building are full in summer subtropical plants, therefore, the palace itself received its own title. New garden – a park of 102 hectares, located near the Saint lakes It was founded by order of Frederick Wilhelm II in 1787. In the palace Cecilienhof in 1945 was held Potsdam the conference.

The Botanical Garden of Potsdam University contains over 10,000 plants. It even grows sequoia. 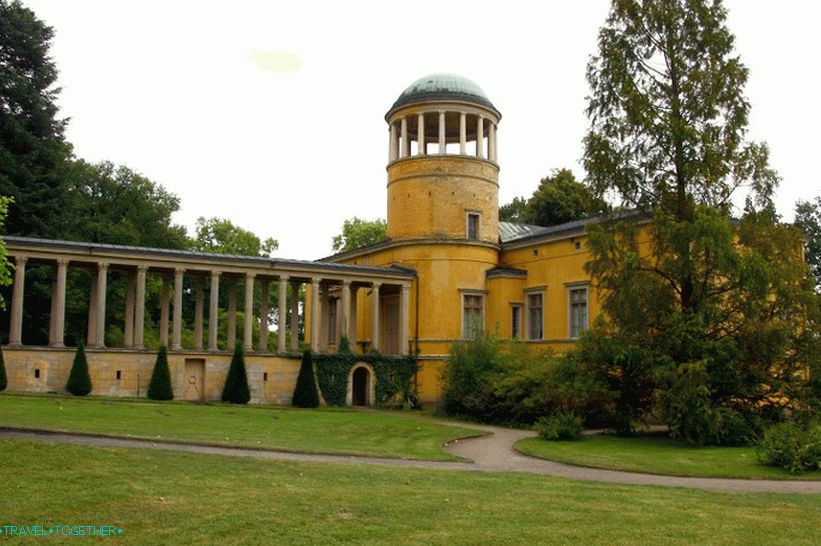 Lindstedt Palace – located close to the park Sanssouci slightly away from the hiking trails. Was built in the middle of 19 century in the style of romantic classicism. Palace and Park Glienike – located on the banks of the river Havel. Was built in the 1930s by Prussian Prince Charles after the trip to Italy. 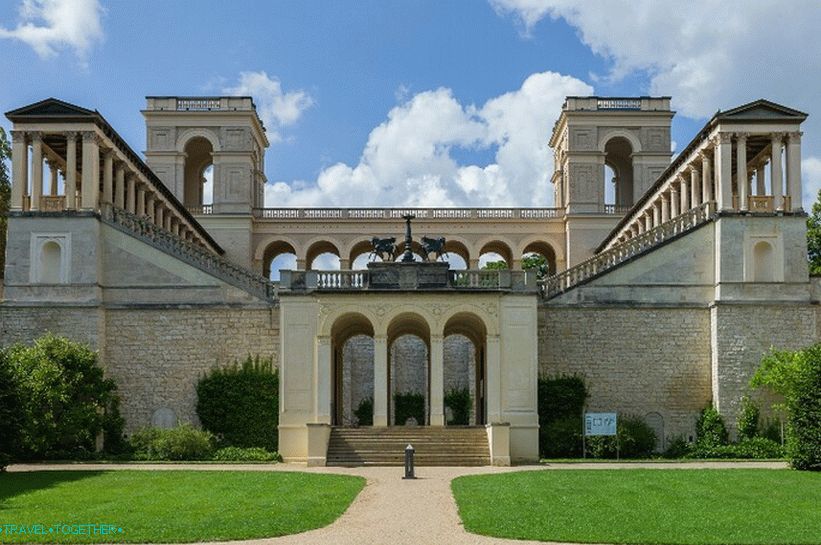 Belvedere Castle is a romantic palace of the mid-19th century, built by Friedrich Wilhelm IV. The palace is located on 76 meter hill and offers one of the most beautiful views of Potsdam.

Castle and Park Babelsberg – the residence of the Kaiser Wilhelm, built in the 19th century. Located in the eastern part of Potsdam. The palace was built in the Neo-Gothic style, and from the park a beautiful view. 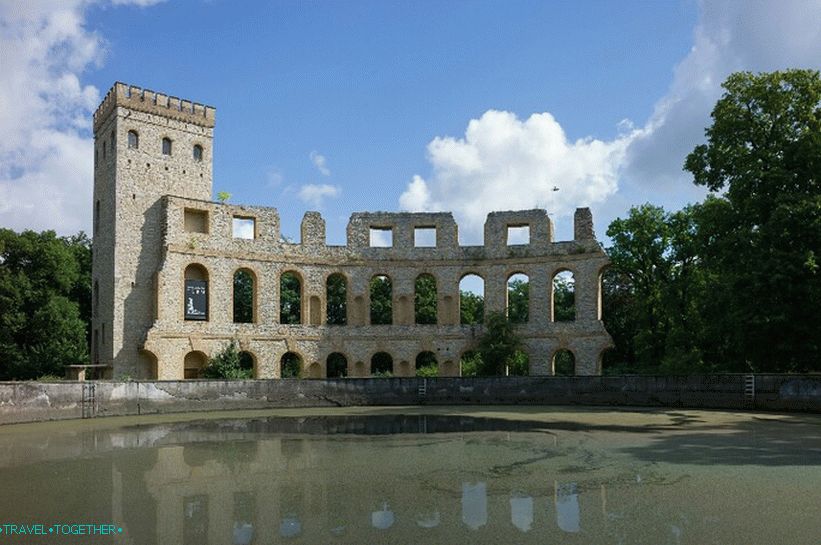 Norman Tower – artificially created ruins on a hill with viewing platform. From here there is a beautiful view of Sans Souci. 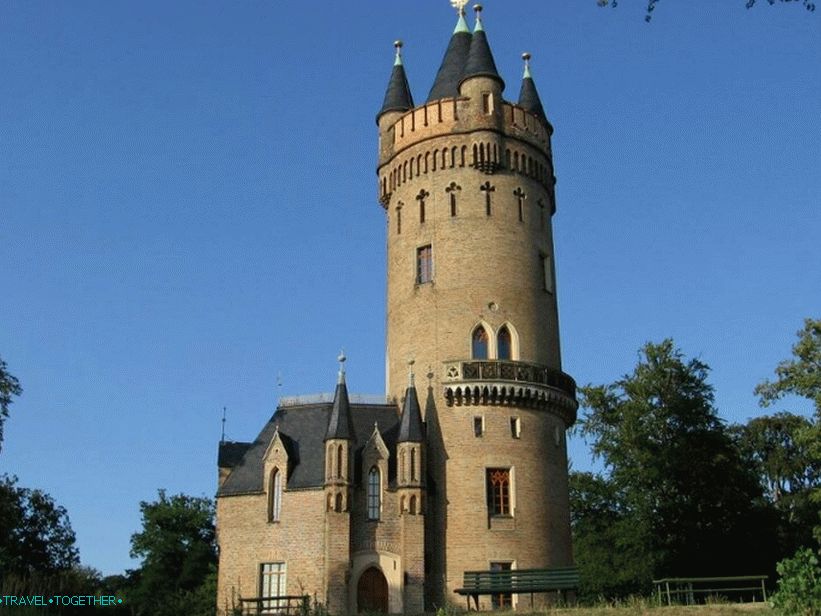 Tower in the park Babelsberg

The tower in Babelsberg Park is a beautiful non-iconic structure, built in the middle of the 19th century. It has a height of 46 meters. 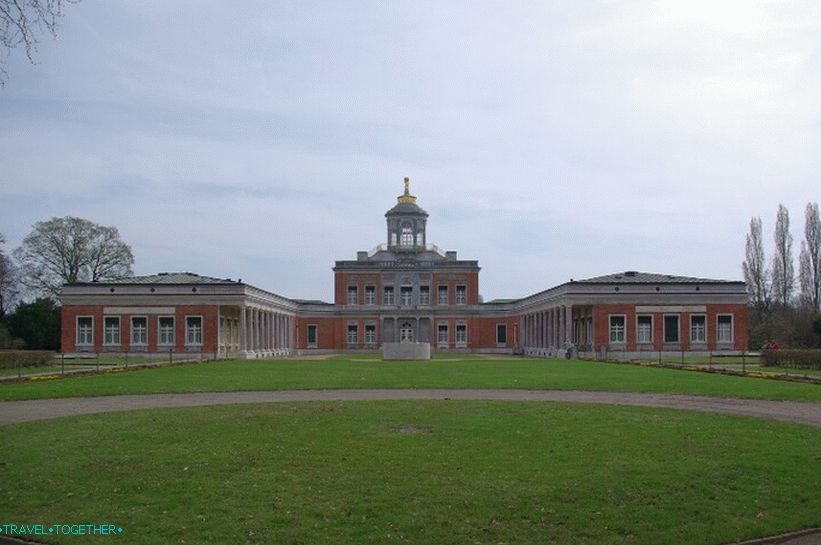 Marble Palace – a highlight of classicism, built at the end of 18 century of brick and marble.

Other sights of Potsdam 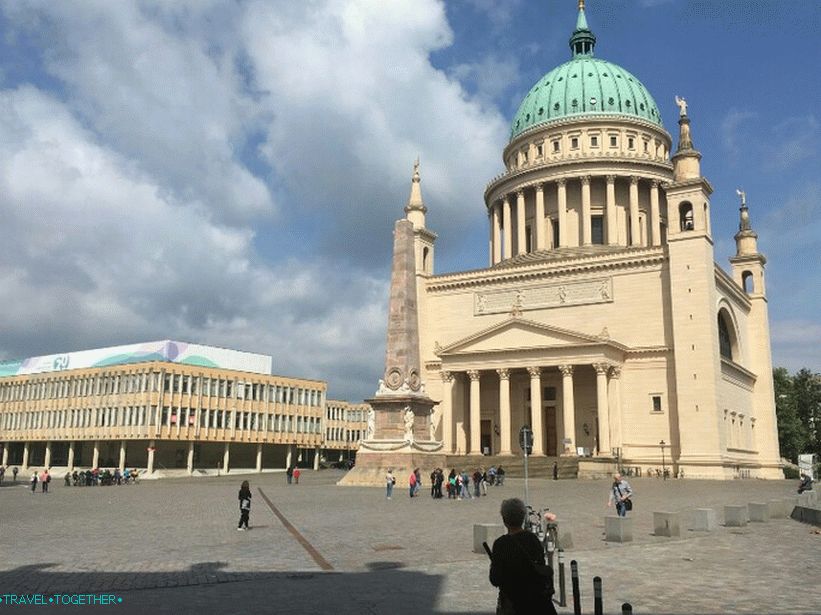 The old market is the heart of Potsdam. This is one of the oldest squares. cities. The main architectural highlight of the square is the baroque church of sv. Nicholas 19th century. 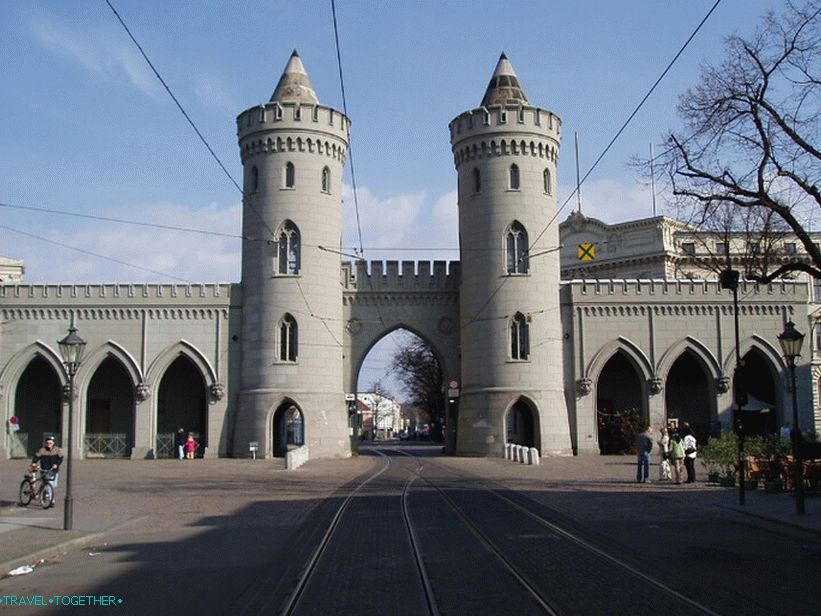 Nauen Gate – one of the three city gates of Potsdam, built in the middle of the 18th century by order of Frederick II. They considered one of the first neo-gothic structures in Europe. 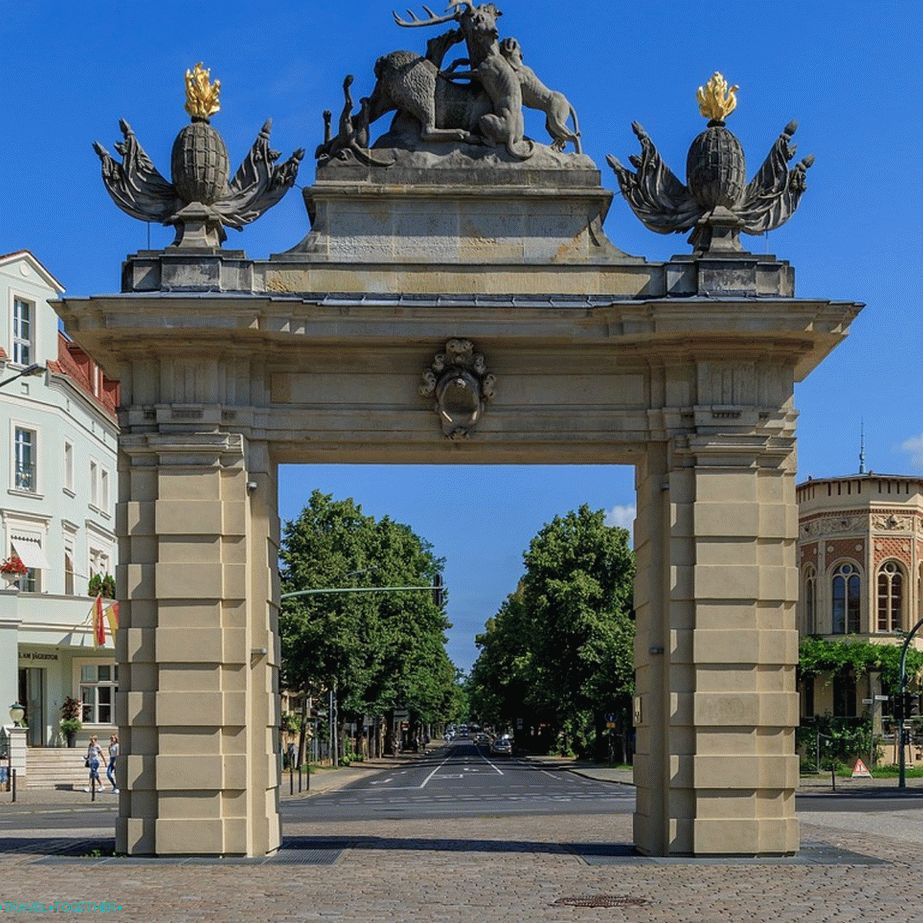 The Brandenburg Gate is a triumphal gate certified in 1770 year They were built in honor of the end of the Seven Years War. 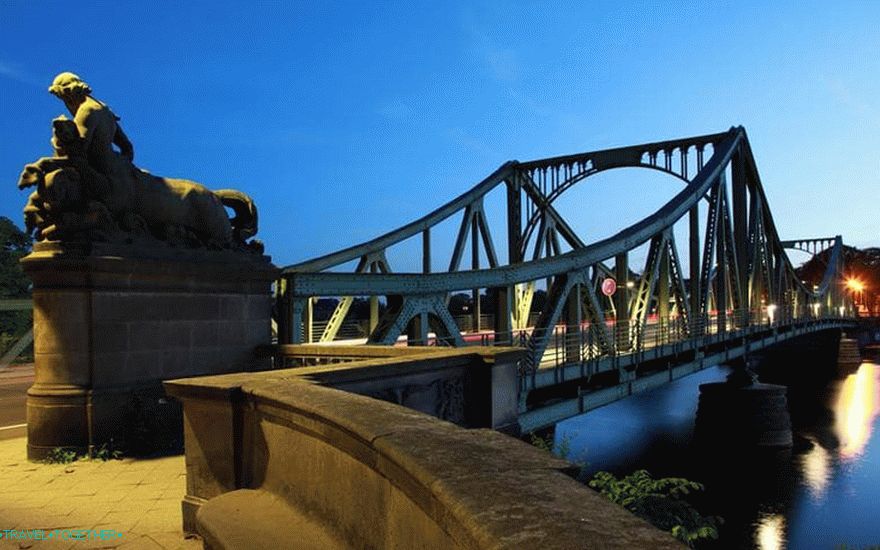 Bridge Glienike connects Potsdam and Berlin. This is one of symbols of the Cold War and the division of Germany. Performed Border functions between the GDR and West Germany.

Potsdam on the map of Germany