Portugal – the most detailed information about the country with a photo. Attractions, cities of Portugal, climate, geography, population and culture.

Portugal – a state in the far west of Europe, located in the southwestern part of the Iberian Peninsula. Country has land borders with Spain (in the north and east) and washed the waters of the Atlantic Ocean. Portugal has a rich history unique culture, beautiful cities and charming province. This parliamentary republic is developing dynamically in past decades and is one of the most popular tourist destinations on the European continent. Although once, most recently, it was one of the poorest countries in Western Europe.

Portugal has exceptional landscape diversity from green hills in the north, covered with forests and vineyards, to rocky mountains with impressive landscapes in the central part and semi-desert in the south. Also, the country is famous for its stunning coast, warm climate and gorgeous beaches. Portugal is a place soaked in the sun and sea, which has an excellent southern the atmosphere. 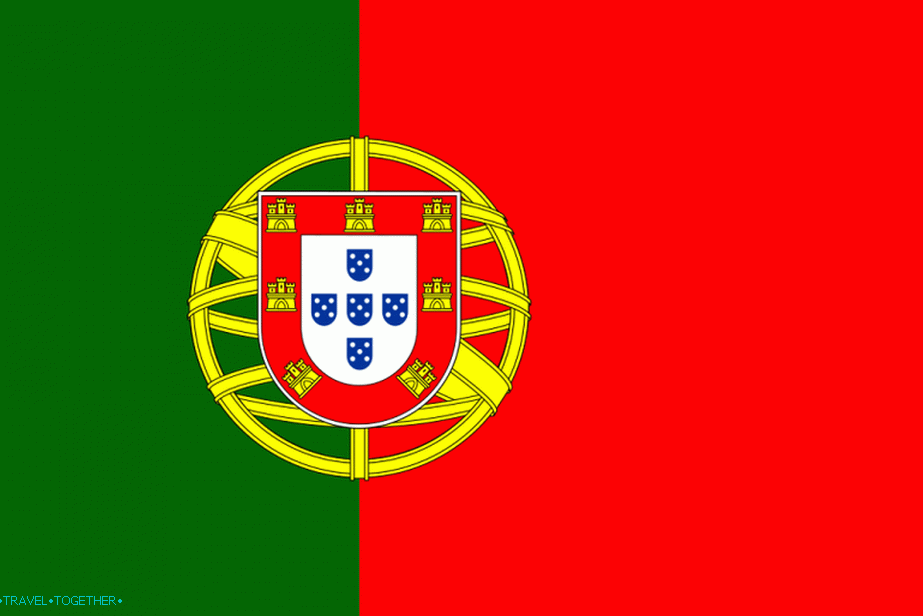 Portugal is Europe’s most western country (and Eurasia in particular). The country occupies the southwest of the Iberian Peninsula and washed by the waters of the Atlantic. Also part of Portugal The island of Madeira and the Azores. The country has a pretty varied terrain. The north and east are low mountains. Nearer to the center they move to a hilly plain, and to the south a plain replaced by lowlands. Portugal’s largest rivers: the Tagus (Tagus), Douro, Guadiana. The coastline is quite long and rugged with many beautiful beaches. 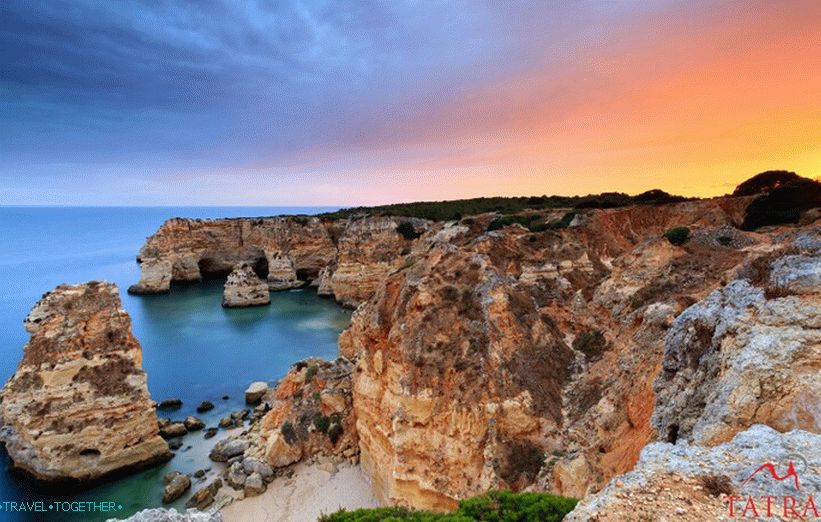 Flora and fauna have typical Mediterranean nature, although there are in the nature of Portugal and its own characteristics. More the northern and central parts of the country are covered with forests. At all forests cover about 20% of the territory. In them prevails Portuguese oak, pine, pine. Portugal is also famous many vineyards, plantations of cork oak and eucalyptus. The fauna is typical for Southern Europe: lynxes, boars, bears, wolves, foxes. Also in Portugal you can find typical representatives of the fauna of Africa, such as the chameleon.

Portugal is one of the warmest European countries. Here subtropical Mediterranean climate prevails with warm summer and mild winter, which is greatly influenced by proximity Atlantic and high altitude zoning. Rainfall ranges from 400 – 800 mm in the plains to 1000 – 2000 mm in the mountains. 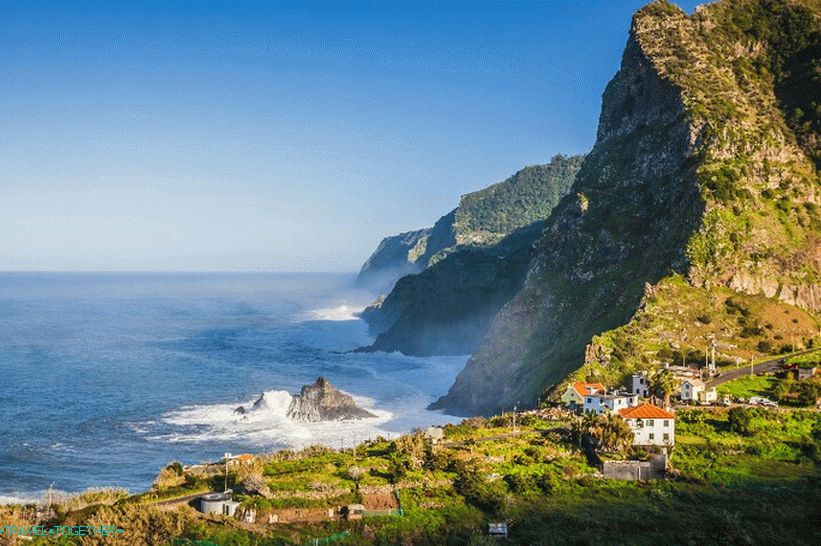 The northern part of Portugal is best visited from May to September. AT The center of the country and its south is best to go from April to October. On madeira recommend heading in summer and early autumn. For a beach holiday better to go to the southern beaches, where the water warms up to 23 ° C

Portugal has a 900-year history. This is the oldest state Europe, whose borders have not changed since the Middle Ages. AT prehistoric era (1 thousand BC) the north of Portugal settled tribes of Celts, south – lusitanians. All of them were later subordinated to the Roman Empire. In the 3rd century BC. Iberia was conquered Carthage. Although even earlier on the coast were founded by the Phoenician the colony.

In 159 – 135 years BC. er local tribes tried confront the Roman legions. This war is known as the Lusitanian. In 15 BC. er The Roman province of Lusitania was formed. After the collapse of the Roman Empire at the beginning of the 5th century, Iberia was invaded Germanic tribes. In 414, the Iberian Peninsula began settled sveva who occupied most of modern Portugal and formed their own state. The Svev State was subordinated to 585 by the Visigoths. 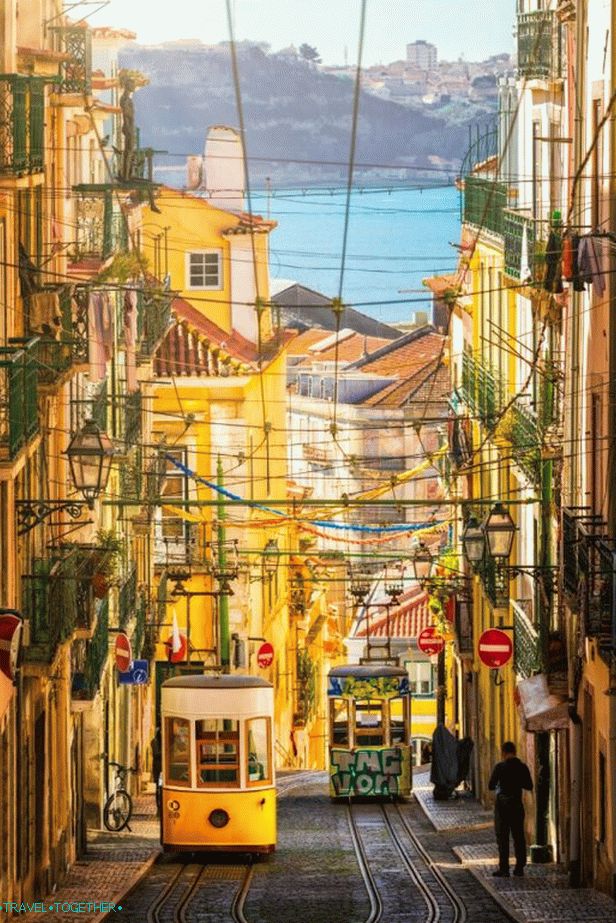 Lisbon – the capital of Portugal

At the beginning of the 8th century, most of the territory of the Iberian Peninsula was conquered by the Moors (Arabs). In 868 it was formed the county of Portugal, which was subordinate to the kingdom Leon (vassalage). De facto portuguese The state was founded by Afonso I of the Burgundian dynasty. After a series of military conflicts with Castile in 1267 was signed peace agreement that defined the borders of Portugal over the river Guadiana. The end of the 13th century – the first half of the 14th century – the heyday Portuguese state. At this time, the country was one of cultural centers of Europe, had significant economic and military power.

In 1383 the Burgundian dynasty was interrupted and came to power Avisi dynasty. In 1386 Portugal made an alliance with England, which actually lasted until the first half of the 20th century. At 15 century this small country becomes one of the most powerful marine powers. Her navigators make many geographic discoveries. In the 16th century, the Portuguese create a huge colonial an empire that flourished until 1580, when the Avisi interrupted dynasty. During this period, Portugal becomes dependent on Spain until 1640. 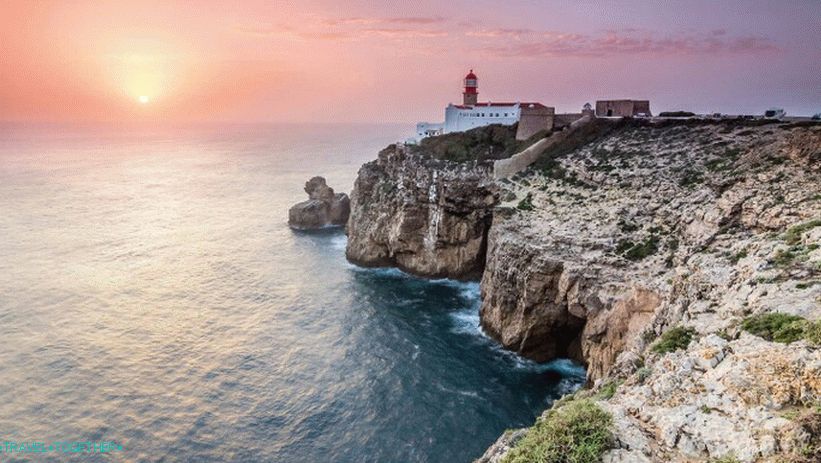 Portugal became independent in 1640 with the introduction of the throne of João IV from the Bragances dynasty. By the 18th century war with Spain significantly undermined the welfare of Portugal. In this period the country is in decline. In 1792, João VI took the throne. (as regent). He made an alliance with Britain against France, which ended the war of the United Kingdom with Spain and the world unprofitable for Portugal. In 1807, Napoleon Bonaparte agreed with the Spanish king on the division of the Portuguese of the state. Under the threat of war, João VI flees to Brazil. is he returns in 1820 after the uprising in Porto, while agreeing to establish a constitutional monarchy. Ruler Brazil becomes his eldest son Pedro. In 1822 Brazil declares its independence. Portugal is losing its home colony, which leads to its financial crisis.

In the 19th century, Portugal extended its influence over African territories (Mozambique, Angola). In 1910 there was an overthrow monarchy and the formation of the First Republic. During the First World War war Portugal declared its neutrality, although then entered into war on the side of the Entente. In 1926, Antonio de Salazar, who established the dictatorship. During the Second World War war country remained neutral. In September 1968, Salazar resigns, and Marcelo Caetana becomes head of state. In 1974 Caetano’s regime was overthrown, and Portugal became parliamentary republic. On January 1, 1986, the country joined The EU.

The territory of Portugal is divided into 18 districts (“Dishtrit”), which are divided into 308 “console”. Azores and Madeira are autonomous regions. 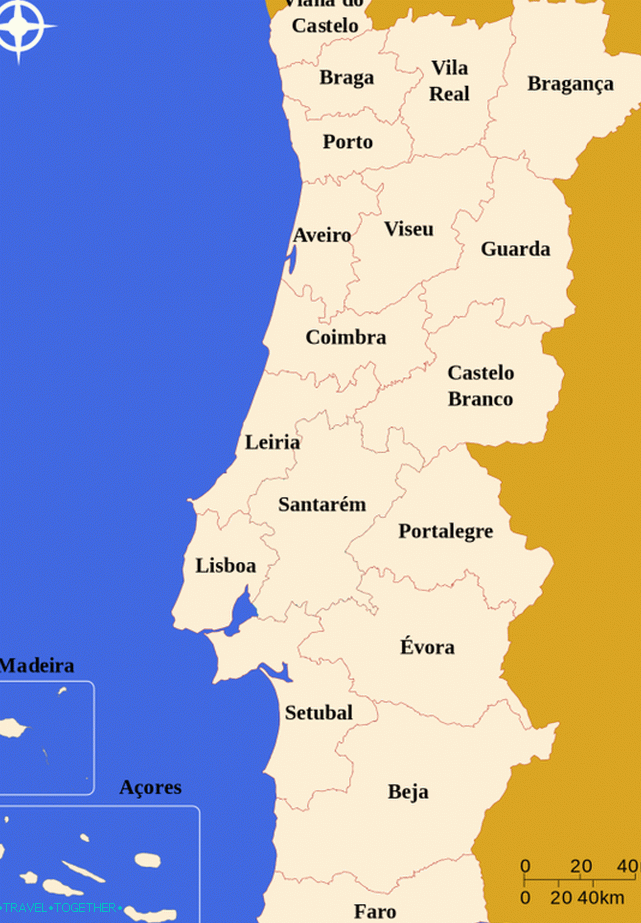 The population of Portugal is about 10 million people. Of these, 87% – Portuguese and 12% – immigrants from Africa and Asia. The predominant religion is Catholicism, which adheres to 90% of the total population. The official language is Portuguese.

Portuguese belongs to the Romance group and has significant similarity to Spanish (approximately 89% lexical similarities). Although many words can be written almost just like in spanish or italian, pronunciation is sometimes differs significantly. This is because in Portuguese there is several sounds that are not in these languages. Interesting that European Portuguese is different from Brazilian. Brazilians it is often difficult to understand the Portuguese. With this, the Portuguese are easy commemorate the Brazilians.

The Portuguese themselves are distinguished by sincerity, calm, some relaxation. They are always ready to help, adore to rest, in business is somewhat unhurried and not punctual. Wherein communication with them is distinguished by warmth and politeness. With When addressing a man you need to say “senor”, and a woman “senor”. The Portuguese are anxious about their language, history, culture and not very fond of comparisons with Spain. Portugal has excellent air links with most major cities of Europe, as well as with the largest cities of the Northern America and Asia. You can easily get to the country by train and bus. from Spain.

The most common transport to travel on Portugal are trains and buses. With this move rail usually happens a little faster though The country’s railway network is rather limited. Also by Portugal is convenient to travel by car. Dear here pretty good The largest cities are served by modern highways, which are mostly paid. Volcano Peak in the Azores – the highest point of Portugal Monastery of Hieronymus or Zerominus – a masterpiece of Manueline style late gothic. Located in a suburb of Lisbon (Belem) and turned on to the list of UNESCO World Heritage Sites. Also belen is a symbol of great geographical discoveries, from where to sail Fearless Portuguese mariners came out. The tower in Belem is a symbol of the era of geographical discoveries and travel as well as one of the most famous historical monuments of Portugal and the icon of Lisbon. Built in 1521 as a fortress to protect the approaches to the river Tagus, the tower is considered a masterpiece of military architecture and included in the list of objects UNESCO World Heritage Site. 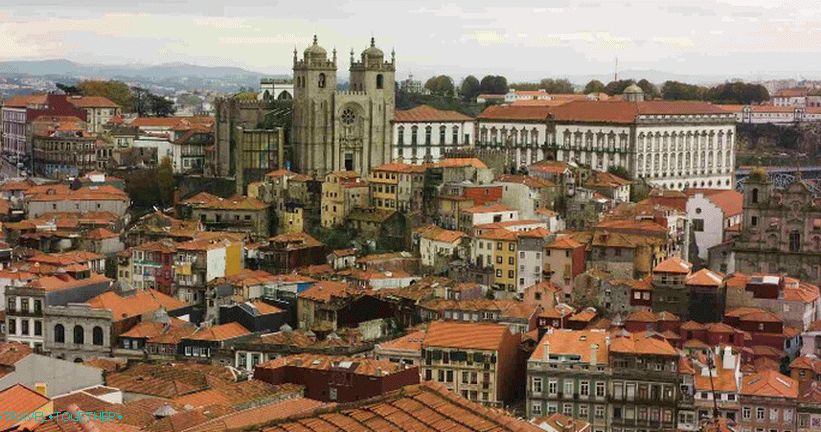 Porto Cathedral is one of the most important Romanesque buildings of Portugal. This church began to be built in 1110 and completed only through 627 years. Convention to Cristo – one of the most outstanding historical the sights of Portugal. This is a magnificent medieval monastery which is a masterpiece of manueline architecture and the headquarters of the Knights Templar. 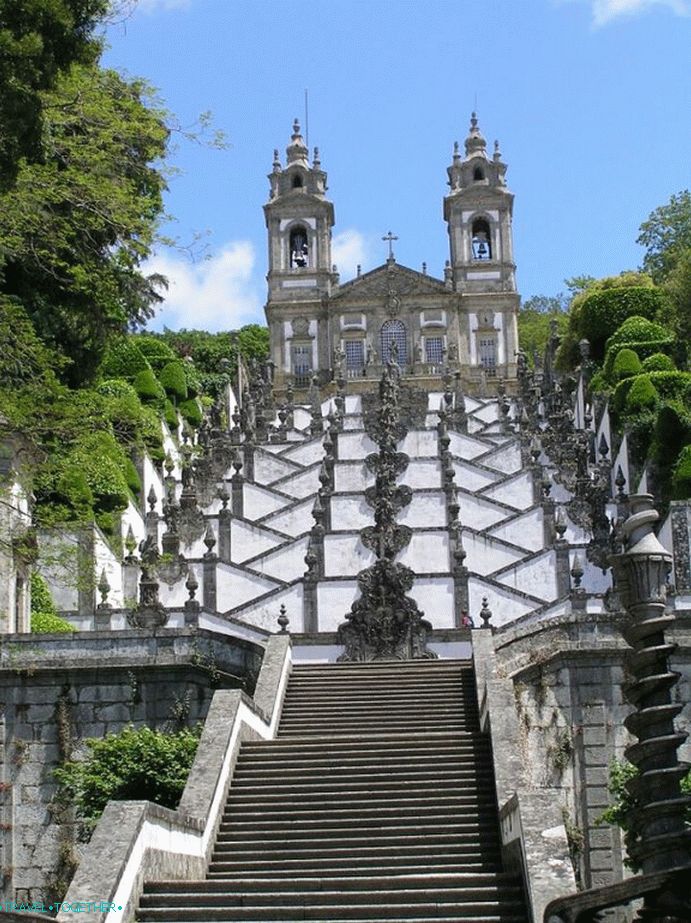 The University of Coimbra is Portugal’s oldest educational institution, founded in the 13th century and included in the list of World UNESCO heritage. 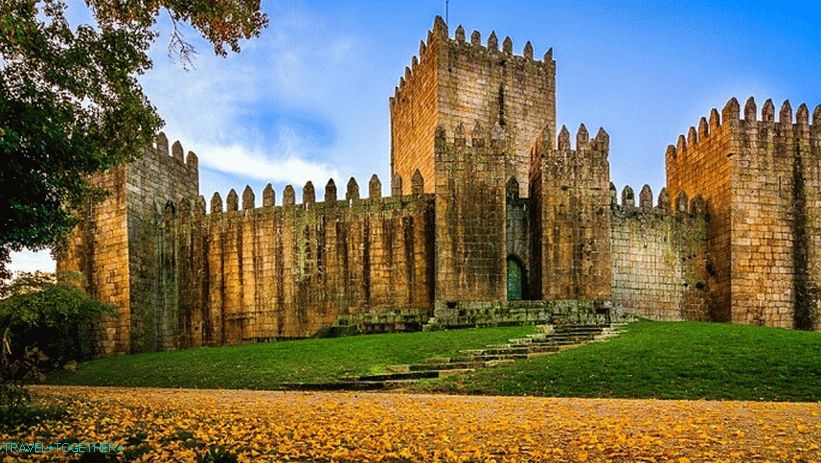 Castelo de Guimaraes – a mighty medieval citadel, located on a granite elevation and surrounded by massive walls with fortified towers. Considered the birthplace Portuguese nation, being the birthplace of the first king Portugal Torre dos Clerigos – a slender tower of the 18th century, towering over 75 meters above the old Porto. It is a symbol of the city and a masterpiece. Portuguese Baroque.

Castelo de San Jorge – the most famous historical monument Of lisbon This is an impressive castle, which was the residence Portuguese kings. The castle was founded at the end of the 12th century, and in 1511 year expanded and strengthened with powerful walls. The Roman temple in Évora is the most impressive antique building in Portugal, built in the 2nd or 3rd century of our era.

Nearby is a magnificent ancient cathedral, which combines imagine romance style with gothic and baroque. The National Palace in Mafra – a huge palace of the 18th century Baroque style, richly decorated with exotic furniture and numerous works of art.

Silves – the impressive medieval Moorish castle of red sandstone captured by the crusaders in the period Reconquista.

Portugal has a wide selection of hotels from affordable hostels to luxury hotels and apartments of premium class. Also in the country there are many campgrounds.

In the province we recommend staying in inexpensive, picturesque and comfortable bed and breakfasts Portugal is famous for its excellent gastronomy. Portuguese the kitchen is a synthesis of simple and nourishing peasant food with the inclusion high quality seafood. Portugal is famous for its excellent red wine and port wine. (fortified wine). In the Porto region, the popular vinho verde, the so-called. “green wine”.

Portugal on the map