Plovdiv (Bulgaria) – the most detailed information about the city with photos. The main attractions of Plovdiv with a description, guides and cards.

Plovdiv is one of the largest and oldest cities in Bulgaria, which is known for its magnificent ancient monuments and historical center in the style of the Bulgarian Revival. It is located in the south parts of the country between the Rhodope and Balkan mountain ranges. Plovdiv is one of the oldest permanently populated cities in Europe. It is believed that it was founded 8000 years ago. Modern Plovdiv – one of the main tourist and cultural centers of Bulgaria, which offers the tourist an impressive selection attractions from Antiquity to the Middle Ages and New of time.

Plovdiv is located in the center of the Upper Thracian lowland between Rodopi and Balkan Mountains. The city is 150 km southeast of Sofia on the Maritsa River. Plovdiv sprawls on six the hills. Previously, there were seven hills, but Markov was razed to land in the process of mining for the construction of fast-growing cities.

Plovdiv has a moderate continental climate with warm summers and in the cool winter. The greatest amount of precipitation falls in spring and late autumn. In winter, there can be both noticeable frosts, and long thaws. 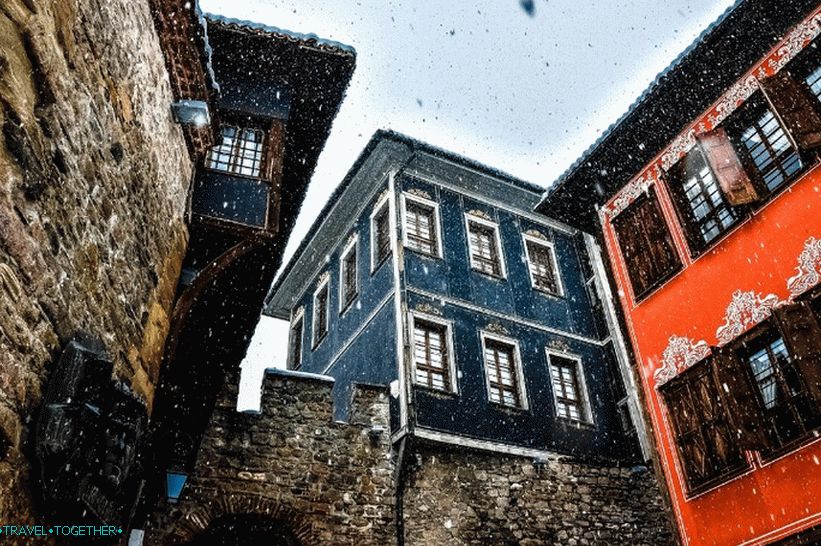 Plovdiv is one of the oldest settlements in Europe, founded about 8 thousand years ago. Already in 1200 BC. er here there was a Thracian city, which in the 4th century BC. was conquered Macedonian king Philip II and named Philipopolis. In the 1st century AD Plovdiv became part of the Roman Empire and received a new name – Trimontium.

In the Roman period, the city was one of the most important cities in Balkan Peninsula. The Romans built a hippodrome here, an aqueduct, terms and amphitheater. In the 3rd century the city was ravaged by the Goths. At the end of 4 century Plovdiv became part of Byzantium, and after half a century was almost destroyed by the Huns. 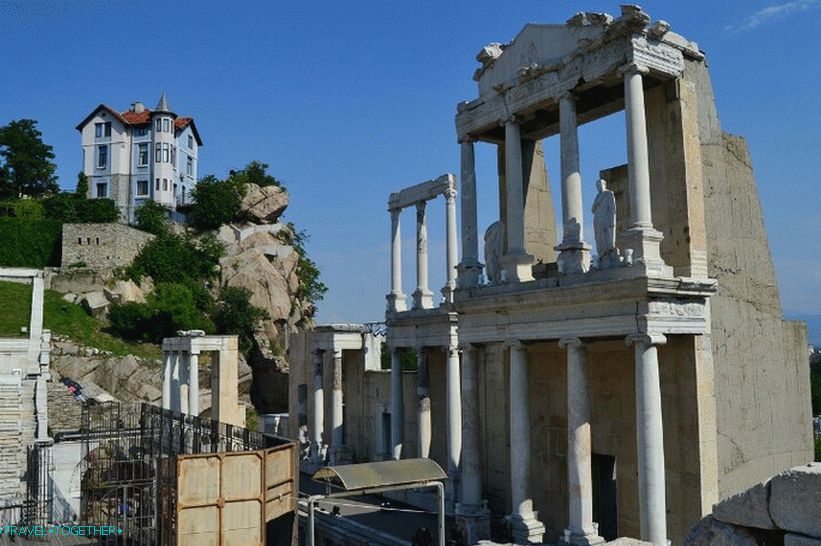 In 1364, the city was captured by the Ottomans, who demolished all its fortifications. Since then, Plovdiv has developed as a trading Centre. In the 19th century, Plovdiv became the center of the Bulgarian Revival. (the struggle of the Bulgarians for independence). In 1878, Plovdiv was busy Russian troops and declared the capital of Eastern Rumelia, which, in eventually joined the principality of Bulgaria. City was severely destroyed by an earthquake in 1928. At the beginning of the second World War II Plovdiv was the center of a movement in support of an alliance with THE USSR.

Plovdiv has an international airport which is connected by regular communication with London, Frankfurt and Moscow (Domodedovo). On the train to Plovdiv can be reached from Sofia and Istanbul. Bus the message is available with almost all cities of Bulgaria, as well some major cities of Turkey and Greece. 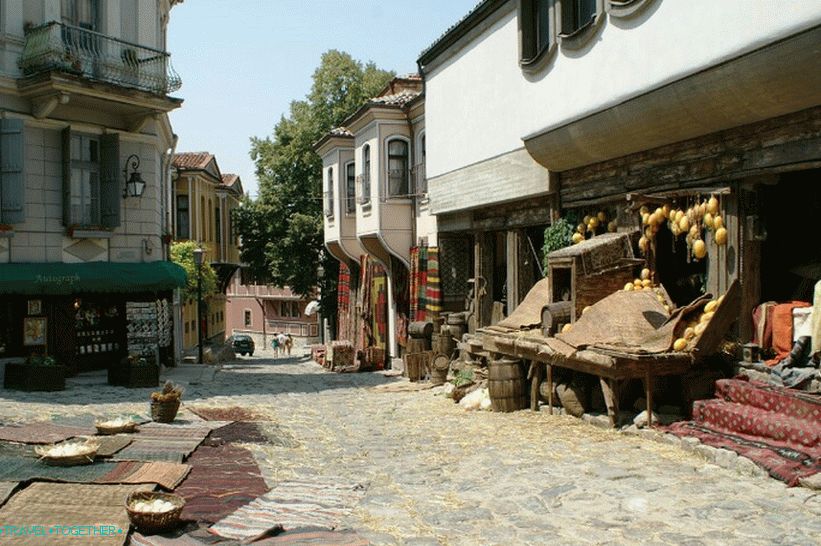 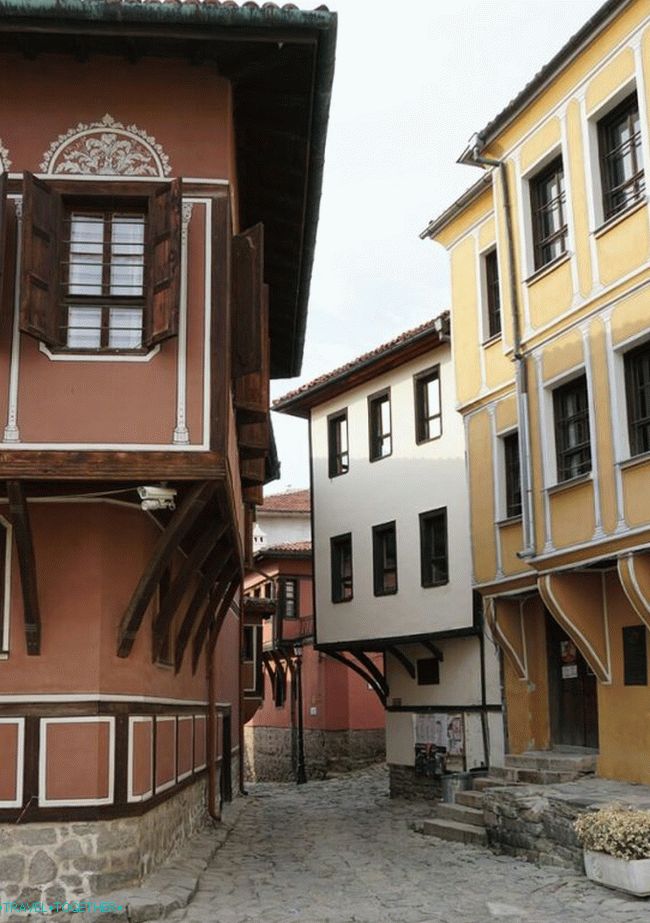 The old town of Plovdiv is located on three hills. He is famous charming cobblestone streets and beautiful houses in style Bulgarian national revival with charming wooden balconies, as well as ancient monuments of history and culture. Most of the buildings of the historic center date back to the 19th century, then how some of the sights of Plovdiv were built over one and a half thousand years ago.

In the summer, we recommend visiting the park of Tsar Simeon with a beautiful singing fountain. 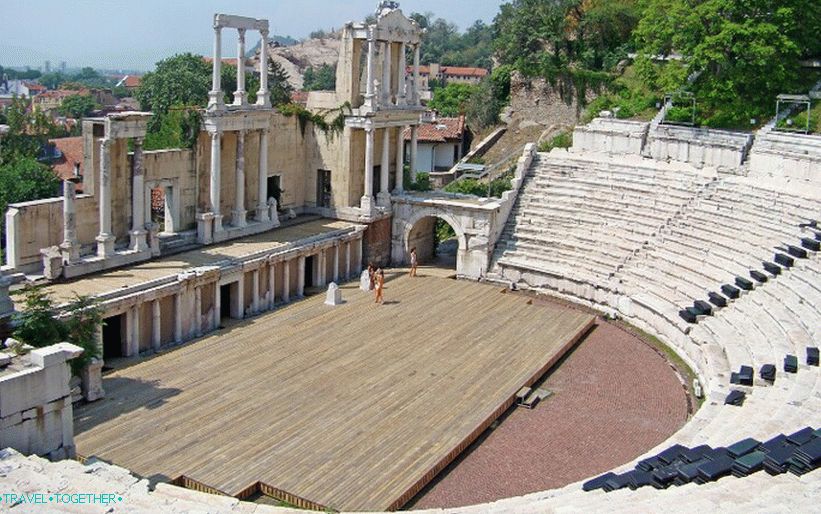 The Roman Theater is one of the main attractions of Plovdiv. and one of the best antique buildings in the Balkans. It is believed that it is also one of the best-preserved ancient theaters period of the Roman Empire. This magnificent structure was built in the 1st century AD during the reign of Domitian. It is believed that theatrical performances and famous gladiator fights. The theater itself is still used for opera and music performances and holds about 7,000 viewers.

Interestingly, the theater was discovered only in the 80s of the 20th century, when a landslide occurred on a hill. 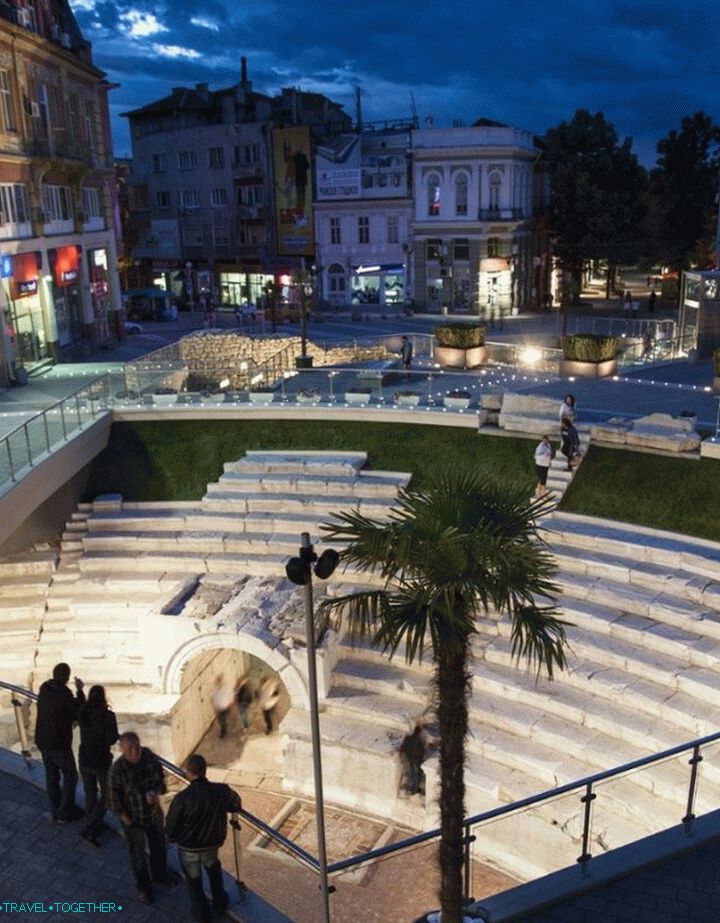 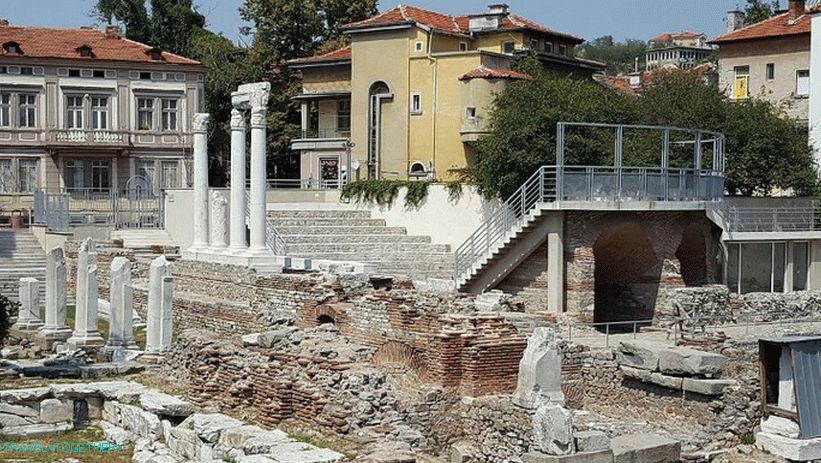 Near the Plovdiv post office are the Roman ruins Forum – a public and political center of ancient Trimonty. Now you can see fragments of Doric columns and ruins Odeon (facilities for musical performances, which also going to the city council).

To get acquainted with the ancient history of Plovdiv we recommend to visit Nebet-tepe archaeological complex – the place where once stood ancient city with fragments of old walls, towers and other buildings. 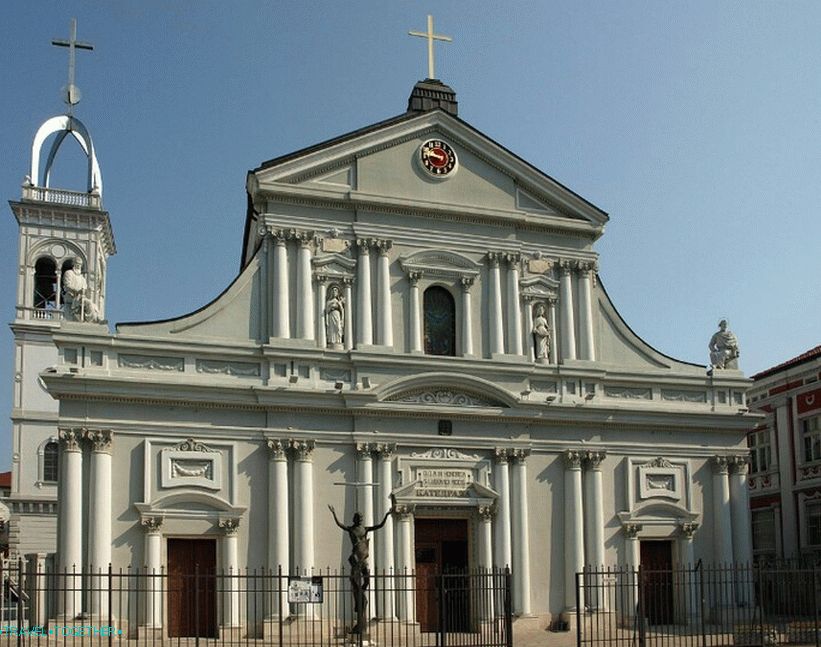 The Cathedral of St. Louis (Louis) – one of the largest Catholic churches of Bulgaria, built in the 19th century. Church combines neoclassical architecture with baroque elements and decorated beautiful frescoes. 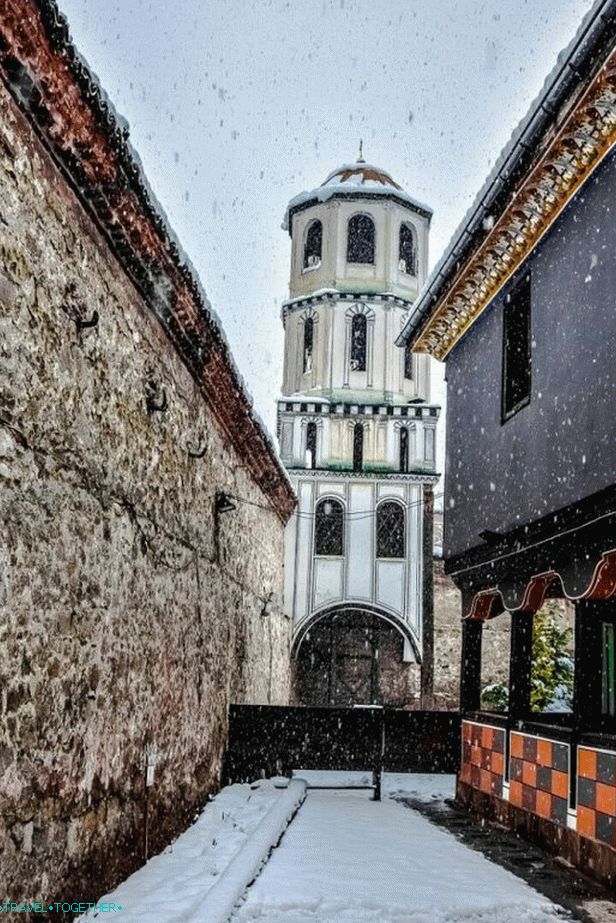 Temple of Saints Constantine and Helena

The Church of Saints Constantine and Helena is one of the main sacral monuments and symbol of Plovdiv. The church here was founded back in 4 century and is dedicated to the emperor Constantine, who is not only actually founded the Eastern Roman Empire, but also issued a decree on freedom of religion. This allowed Christianity to become official religion of Byzantium. The interior of the church is made in the style Bulgarian national revival of the 19th century and decorated in luxurious neo-baroque style. 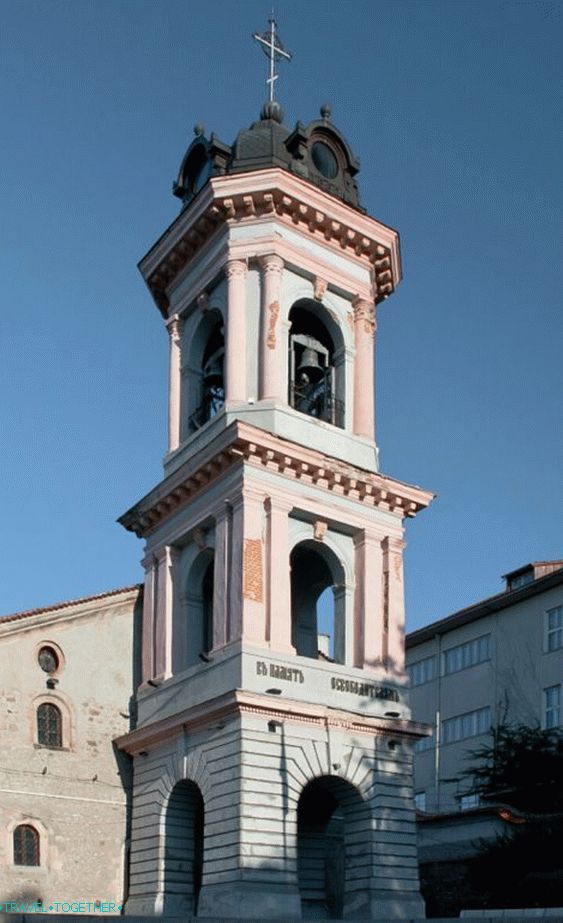 The Church of the Blessed Virgin Mary – the Orthodox Church in one of The six hills of Plovdiv (Nebet-Tepe). The first religious building It was built on this site in the 9th century. In the 12th century, the church was renovated and became part of the monastery. The monastery and the church were destroyed in the 14th century by the Ottomans. The current building (large three-oil pseudo-basilica) was built in 1844. Church of the Most Holy The Virgin Mary is considered the main religious building of Plovdiv. 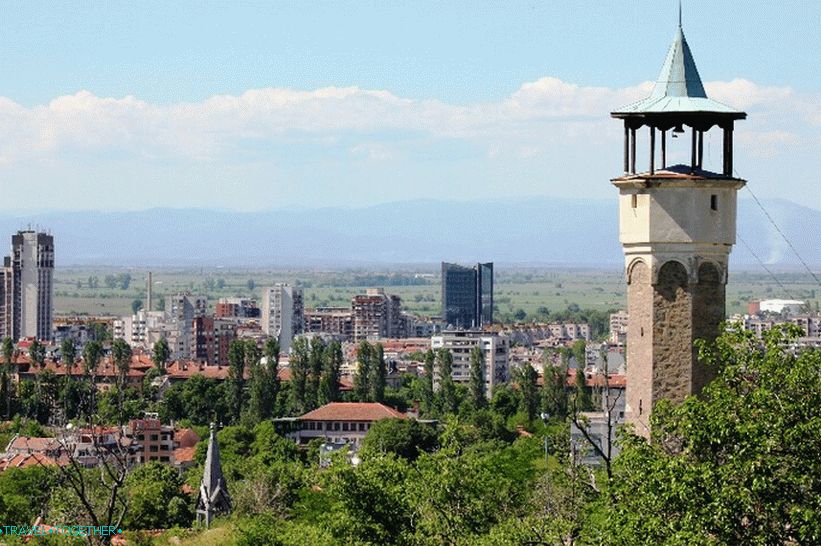 The Clock Tower is a fortified tower crowning the Sahat Tepe Hill. It was built in the first half of the 17th century. 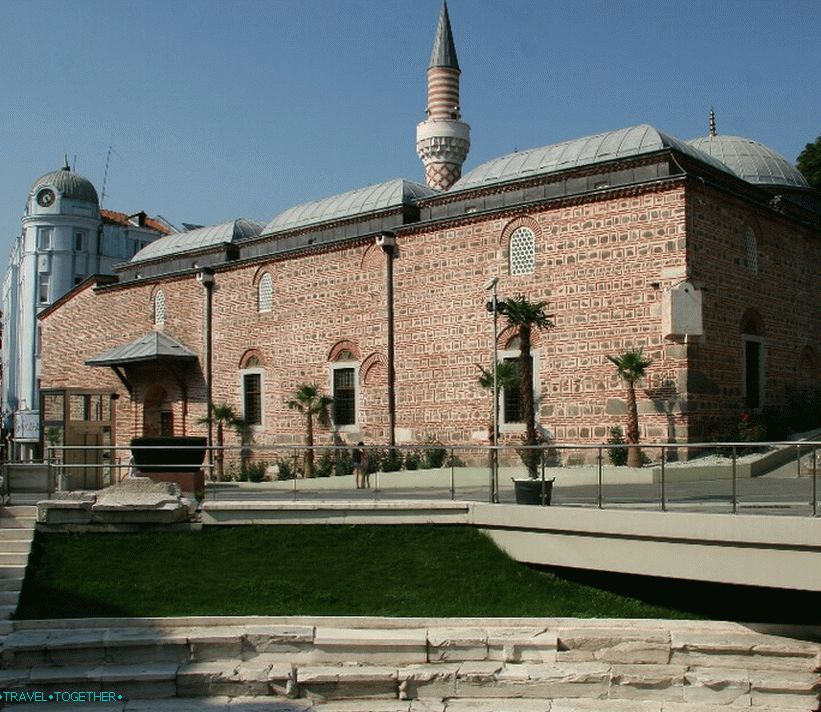 The Juma Mosque is the main mosque of the city during the Ottoman period. Was built by the Ottomans immediately after the capture of Plovdiv on the spot Christian Cathedral. A few centuries later (during the reign of Murada II) the building was rebuilt.

Sights in the vicinity of Plovdiv 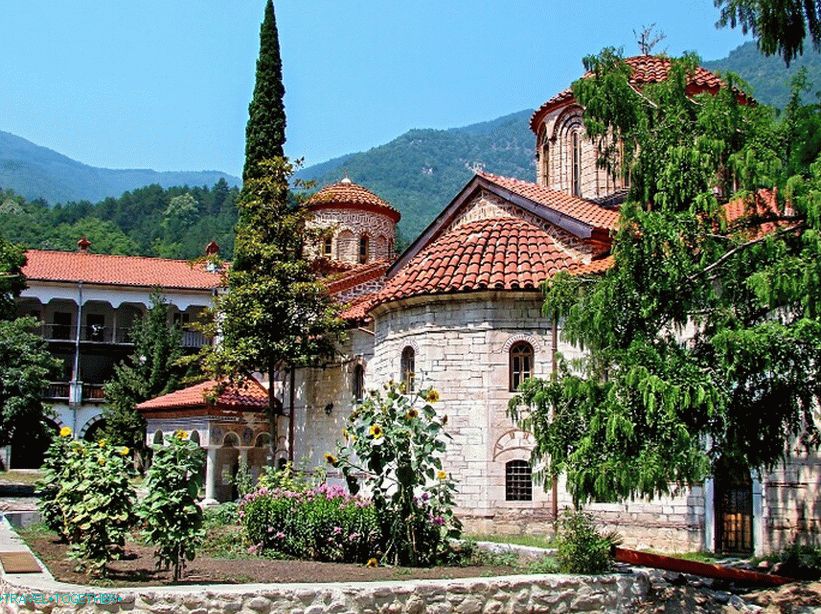 Bachkovsky monastery – the second largest and oldest Orthodox monastery in Bulgaria, which unites the Bulgarian, Georgian and Byzantine religious traditions. Monastery was founded in the 11th century and is considered a national shrine. He is famous medieval frescoes of the 14th century and ancient icons. Bachkovsky the monastery is located southeast of Plovdiv near the city Asenovgrad. 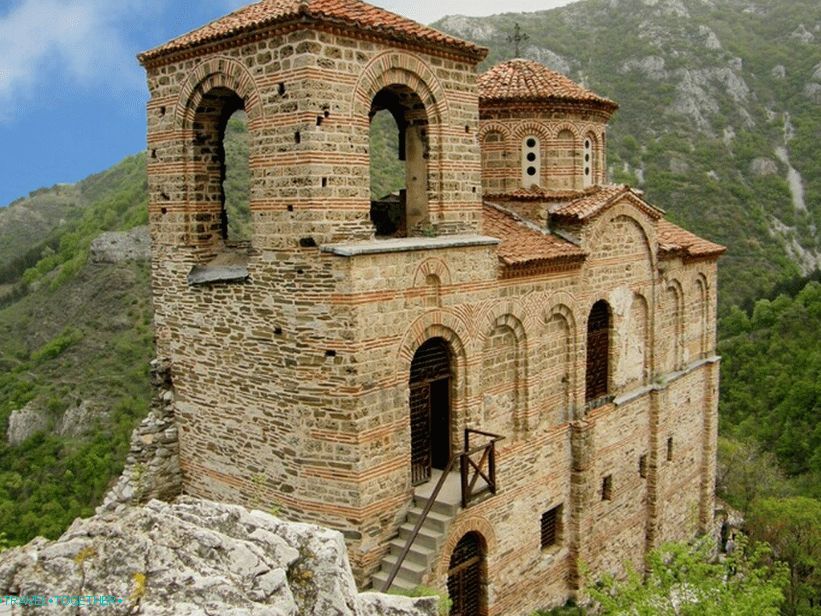 Asen’s Fortress – the impressive ruins of a medieval castle above river Asenitsa, built on limestone rocks. Walls of the fortress zigzag down the steep mountain slopes, protecting the valley. This place was a stronghold of defense in times Thracians. What can be seen today dates from the 12th to 13th centuries. The best preserved medieval church with frescoes of the 14th century.

Plovdiv on a map of Bulgaria