Pisa (Italy) – the most detailed information about the city with photos. The main sights of Pisa with a description, guides and cards.

Pisa is a city in Central Italy in the Tuscany region. Situated in the valley of the river Arno, 10 km from the Ligurian Sea (Mediterranean). First of all, Pisa is known for its “falling” tower, which is one of the symbols of Italy. Many believe that this ancient city, besides the tower and the cathedral, and watch that more there is nothing. And they are wrong! Pisa offers a whole placer the most interesting sights that are included in the list UNESCO World Heritage Sites: the cathedral, Baptistery, Campo Santo, Field of Miracles, Santa Maria della Spina.

Pisa is a quiet provincial university city that famous for its artistic and architectural treasures. City retained much of the contour of the ancient walls and the unique historical atmosphere. Pisa is distinguished above all by its remarkable a group of buildings in Piazza del Duomo, which is also called Square of Miracles. 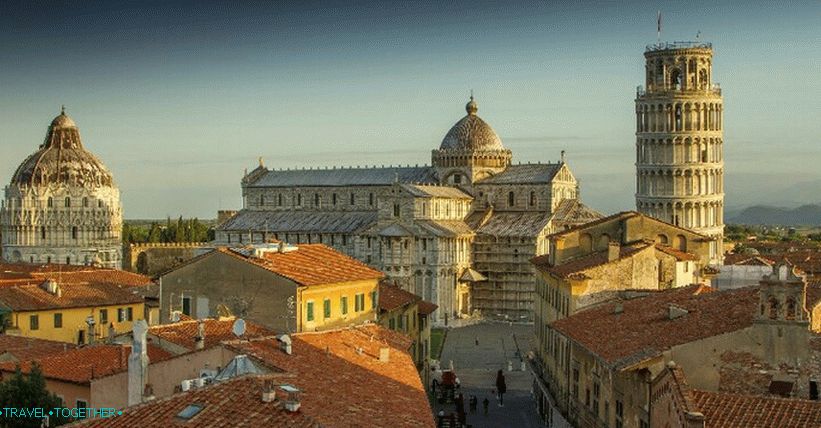 View of the main sights of pisa

Pisa is located on the plains of Tuscany on the Arno River near coast of the Mediterranean. The climate is Mediterranean. Summer is dry and hot, winters are cool and wet. The best time to visit is spring. and autumn. In the summer (except for neighboring resorts) and tourists in winter significantly less. 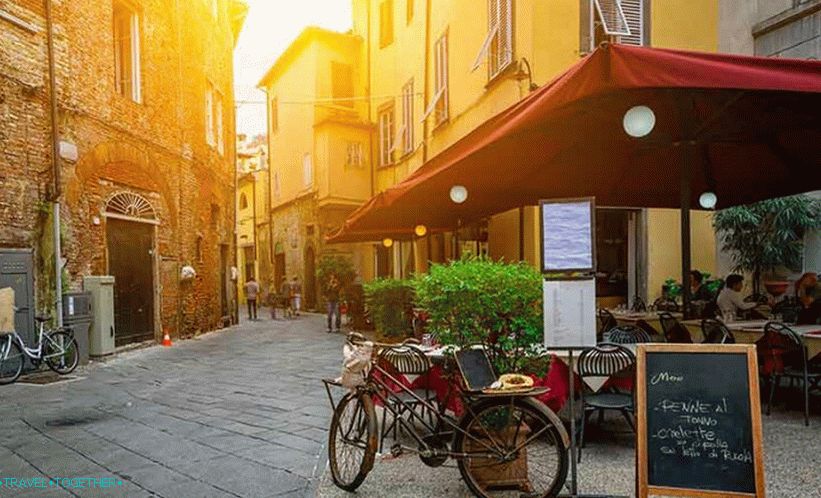 In the pre-Roman period, the environs of Pisa were inhabited by Ligurians. AT 180 BC there was already a colony of the Roman Empire and one from its ports. At the beginning of the 4th century a bishopric was formed here. The collapse of the empire of Pisa met in the status of the main city Tuscany.

In the Middle Ages, Pisa was the center of the republic of the same name, which constantly competed with Genoa. Thanks to the trade, fertile land and favorable position the city was one of most prosperous on the territory of the Apennine Peninsula. Up to 13 Century Pisa was the most important city of Tuscany. End of her prosperity put defeat from the Genoese and the siltation of the mouth of the river Arno, which cut off Pisa from the sea. In the 15th century the city lost independence and fell under the authority of Florence.

In 1564, the great Galileo was born here, who taught at local university which is one of the oldest educational institutions of the world. Until the 18th century, Pisa was a provincial Tuscan city ​​without much political influence. Push to further growth and development was the drainage of nearby marshes, the elimination of foci of malaria and the development of light industry. In 1944, during battles heavily affected areas south of the Arno River.

Near Pisa is the international airport Galileo Galilei, which fly about 18 airlines. Easy and easy to get to cities by train / bus from Florence, Rome, Livorno, Genoa

The main attractions of Pisa (some of them included to the list of UNESCO World Heritage sites).

Campo dei Miracoli or the Field of Miracles – the area north of the central part of Pisa, where the most famous the city’s attractions. 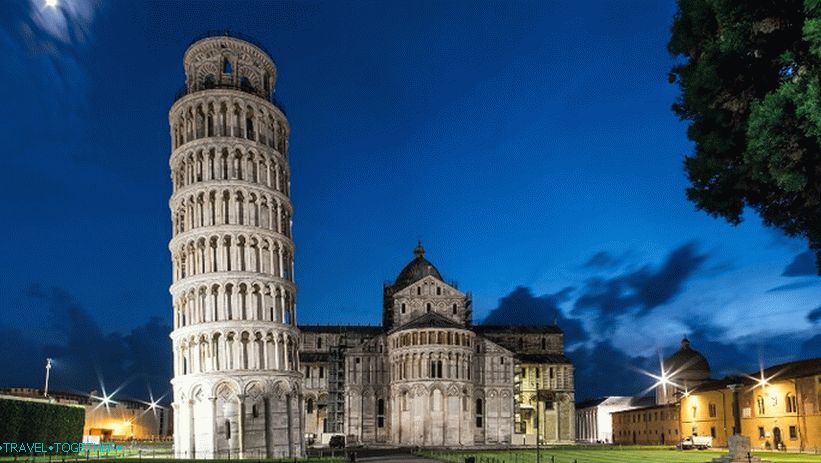 Leaning Tower of Pisa – the famous leaning tower, the main symbol Pisa It was conceived as a bell tower of the cathedral. Was built throughout almost two centuries from the 12th century. The height of the tower is over 50 meters, and the deviation from the axis is at least 4% (this value was changed in 2001 during the fall prevention works towers, when the deviation reached 5.5%). The slope of this structure appeared even during construction. After that, its construction was stopped. Almost 100 years later, construction was again resumed, but the “fall” failed to fix. Open the bell tower was added to the white marble tower in 1350-72 Tommaso Pisano. Entrance to the observation deck is paid.

Cathedral of Santa Maria Assunta – the grand cathedral in Romanesque style, made of white marble. Building began in the 11th century after the victory over the Saracens. Decorated Arcades on the magnificent facade continue around the side walls and its the transepts end in small apses that go far beyond the aisles. The cathedral is crowned with a dome. the main landmark interior – Department of Giovanni Pisano. 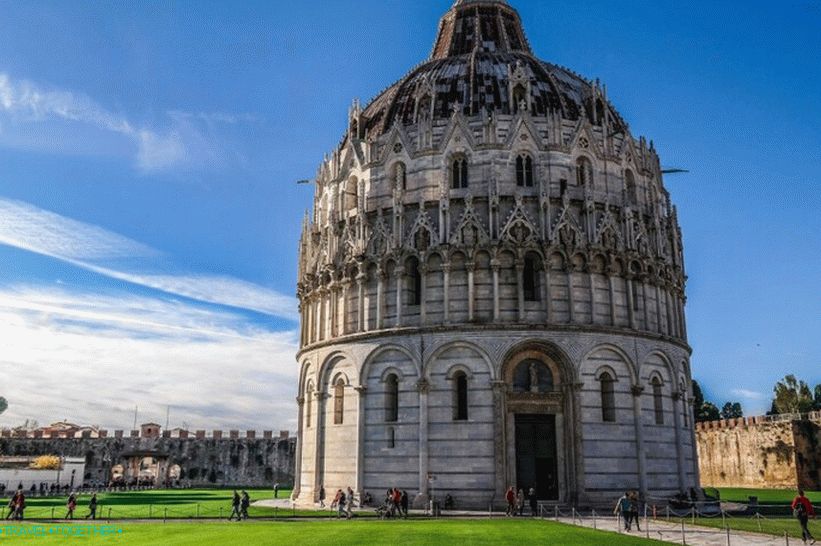 The baptistery is located west of the cathedral. The construction of this facility lasted for two centuries since 1153. That is why the Baptistery combines the features Romanesque and Gothic. This is a beautiful marble building. crowned with a dome. The main treasure of the interior is the magnificent Pisano work chair and astounding acoustics. 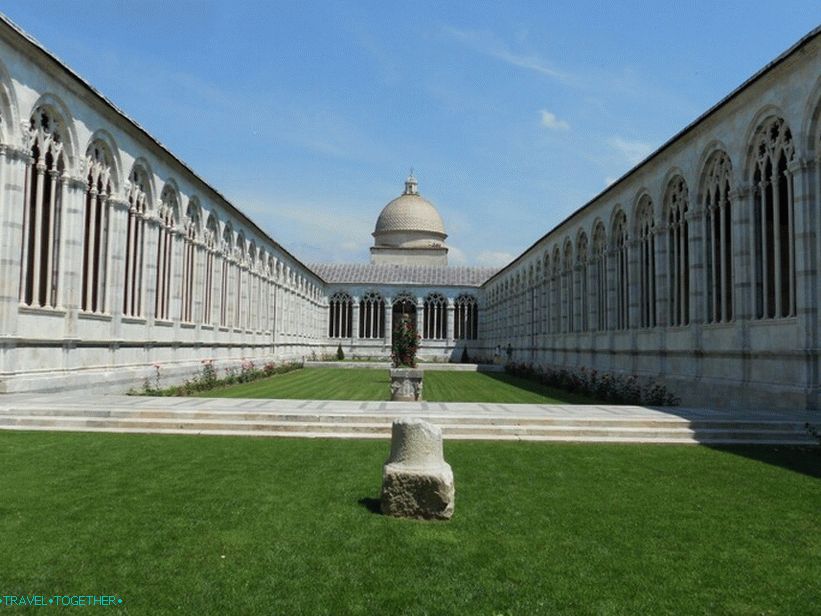 Campo Santo (Sacred Field) – a monastery and an ancient cemetery, formed in the 13th century after Archbishop Ubaldo dei Lanfranche brought back the land of Calvary from the fourth crusade. Here are the tombs of noble residents of Pisa and Roman sarcophagi. The walls were decorated with frescoes of the 14-15th century, which were significantly damaged in 1944. 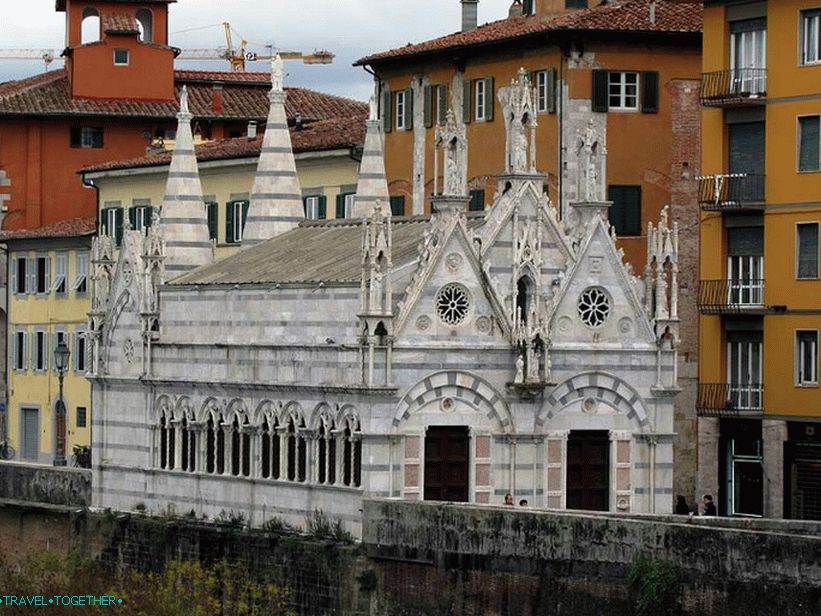 Santa Maria della Spina is a church on the left bank of the Arno River, one of the most beautiful religious buildings of Pisa. Was built of marble in the Gothic style in 1871. 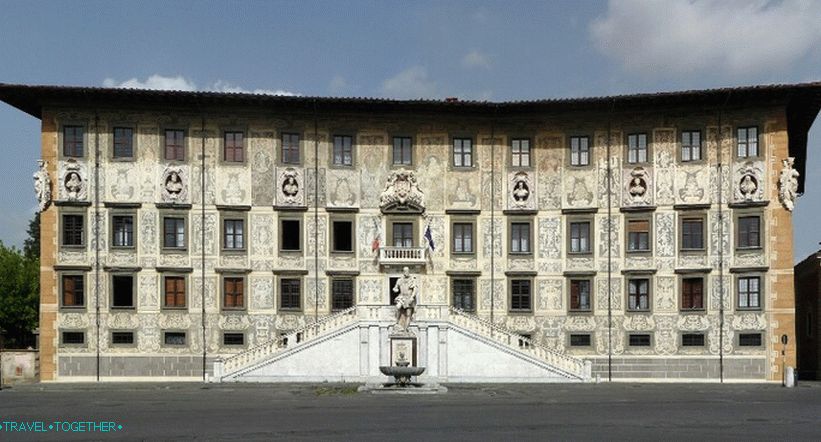 Palace dei Cavalieri or Palace of the Elders – a historic building on the eponymous square. The building was built in the 16th century by the project Giorgio Vasari. The facade is decorated with busts of six Medici princes. Before The building is a statue of Cosimo I by Piero Francavilla. On the north side of the Plaza dei Cavalieri is the palace dell’Orológio, built in 1607 for the Order of St. Stephen and comprising the remains of two early medieval tower houses. 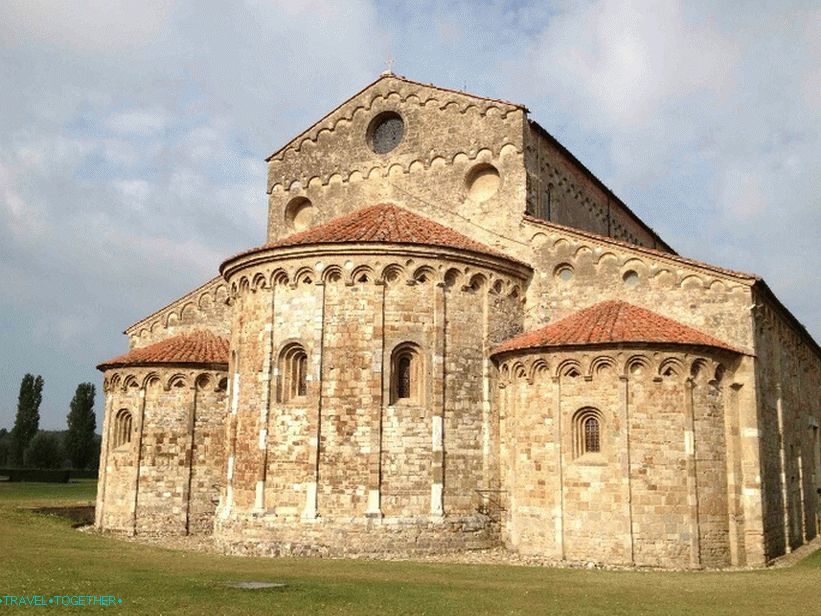 San Piero a Grado is a 10th century Romanesque basilica located near the old port. The interior of the church is decorated with frescoes, and excavations confirm the finding of an earlier Christian churches and even ancient roman buildings.

The Blue Palace is a historic building in which are located art collection from the 16th to the 20th century. 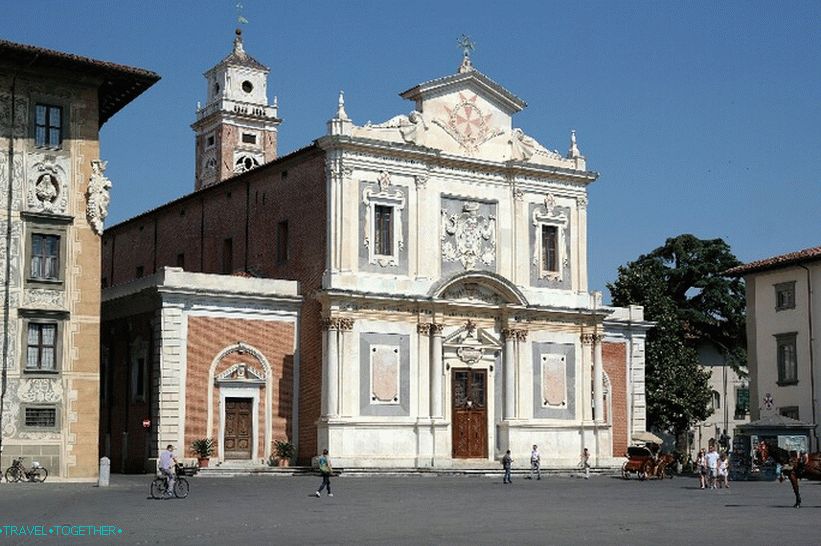 Santo Stefano dei Cavalieri – was designed by Vasari at 16 century. This is a church with a beautiful marble facade and order rarities. St. Stephen.

What else to see in Pisa:

Pisa on the map of Italy