Perugia (Italy) – the most detailed information about the city with photos. The main attractions of Perugia with a description, guides and cards.

Perugia is a city in the center of Italy, the capital of the Umbria region. Located among the hills of the Tiber Valley and is known as a place the emergence of the Umbrian school of painting. Perugia is ancient a city with a magnificent medieval historic center, which, essentially, it has not changed since the 14th century and is one of most beautiful in Italy. Bright and lively, cultural and University, Perugia is a city full of “secrets”, which worth to visit.

Perugia is located almost in the geographical center of Italy between Florence and Rome. The city lies on the hills of the river valley Tiber. In the west, Lake Trasimenes is located (one of the largest in the country).

The climate is subtropical. Average annual temperature of about 13 degrees The coldest month in Perugia is January (average temperature about 4 degrees). Rainfall ranges from 800 up to 900 mm. 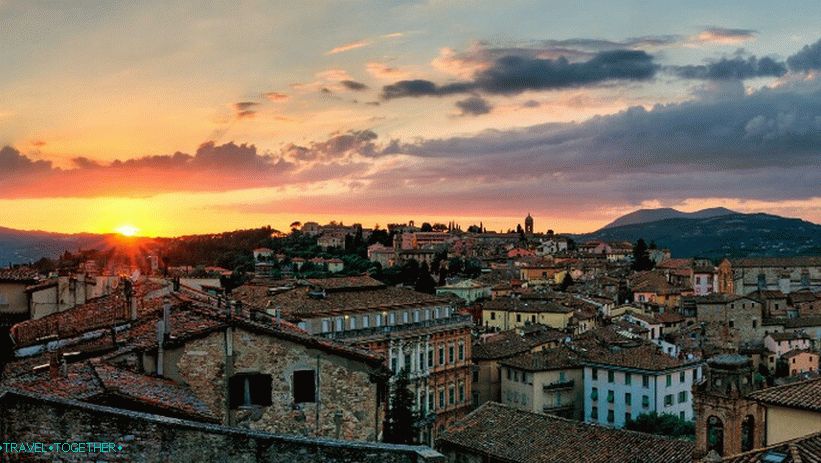 Many scholars believe that Perugia was founded by Umber. First written evidence dates from the period of Etruria. Perugia was one of the 12 Etruscan city-states. In the year 310 before AD the city was captured by the Romans and became a Roman colony Perusia. In the first century BC, Perugia was burned during military conflict between Octavian and Mark Antony. 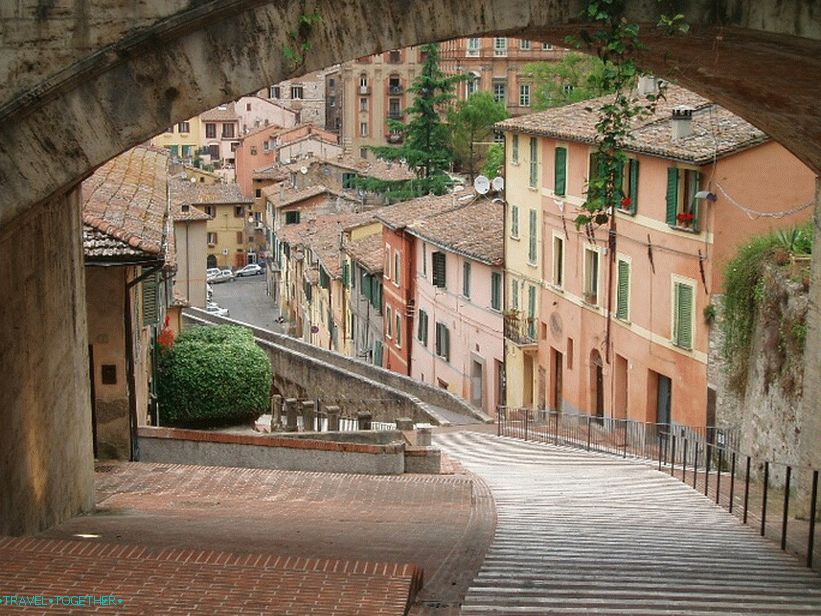 After the collapse of the Roman Empire in the 6th century, the city became the center princedoms of the Lombards. Later in the Middle Ages, Perugia was pretty independent. The struggle for power in the city was between the clans Oddi and Baloni, which led to numerous clashes. AT the struggle between the Guelphs and the gilllings Perugia supported the former. During various conflicts and wars, the Pope often found salvation and help in its walls.

In the Renaissance, Perugia became the center of the development of the Umbrian painting schools. The city gave the world such giants of art as Perugino and Raphael. In 1540, Farnese defeated the last of Ballion, and Perugia was incorporated into the Papal States. During Napoleonic Wars the city became the capital of the Tiberin Republic. AT Perugia was hit by several earthquakes in the 19th century.

There is an international airport in Perugia that takes flights from London, Barcelona, ​​Munich, Bucharest and other cities. Rome Airport is 3 hours away. There is a regular bus and train communication with the capital of Italy and large cities.

There are many clothing and shoe stores in Perugia, including famous brands. Since this is a university city, no wonder that you can find good bookstores here.

Corso Vannucci is the main shopping street of Perugia. Many shops found in Piazza Matteotti, Via C. Fani, Via Baglioni and Via Oberdan. In the Coin mall, located near Piazza della Repubblica, there is a good selection of clothes and accessories. 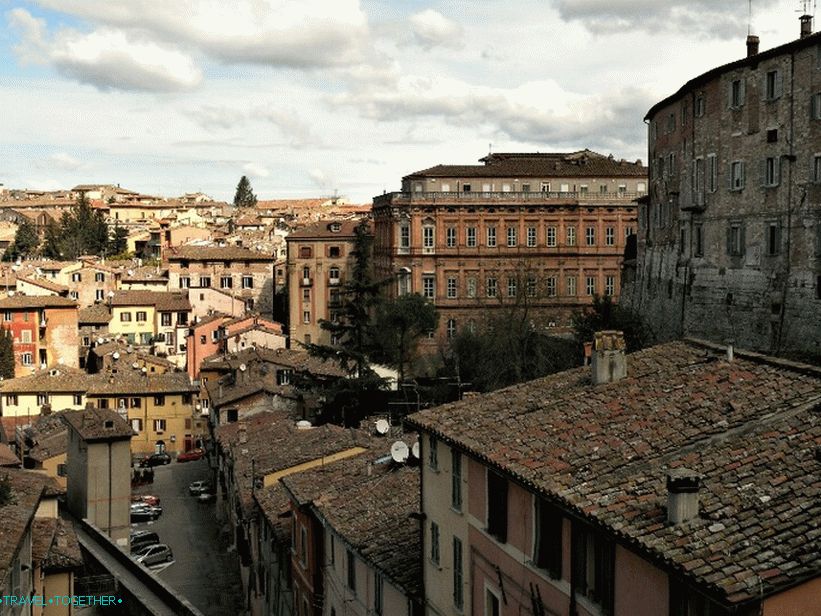 The kitchen of Umbria is quite simple, but it is of high quality. ingredients. The undisputed star of Umbrian cuisine is the truffle. Traditional dishes: spaghetti or strangozzi with black truffle, umbrichelli (perch fillet with sauce), spaghetti rancetto with bacon and cheese, pappardelle of hare with cloves, torello alla perugina, grilled meat, chicken in wine, lamb in the oven. 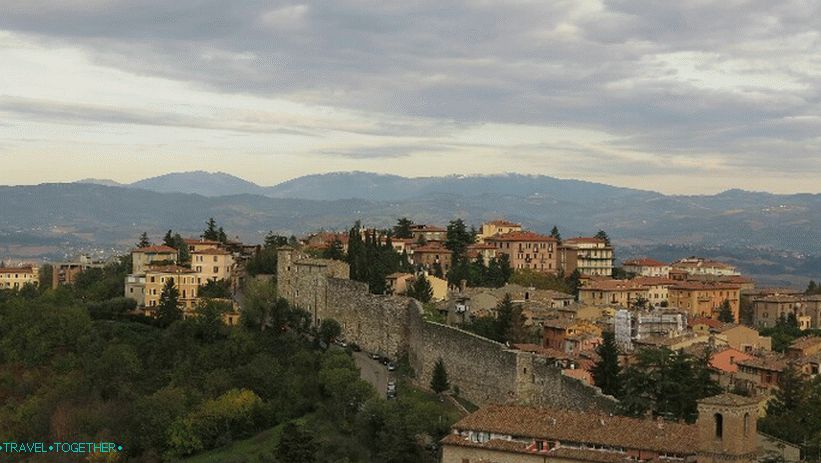 The main attractions of Perugia are concentrated in old town. The historic core of the city has two perimeter walls. The outer wall refers to the period of the Middle Ages. In Perugia sufficiently large sections of the medieval urban fortifications and gates. The inner wall repeats the perimeter of the ancient Etruscan city. Antique Perugia had seven city gates. Before of our time, fragments of Etruscan and Roman fortifications. 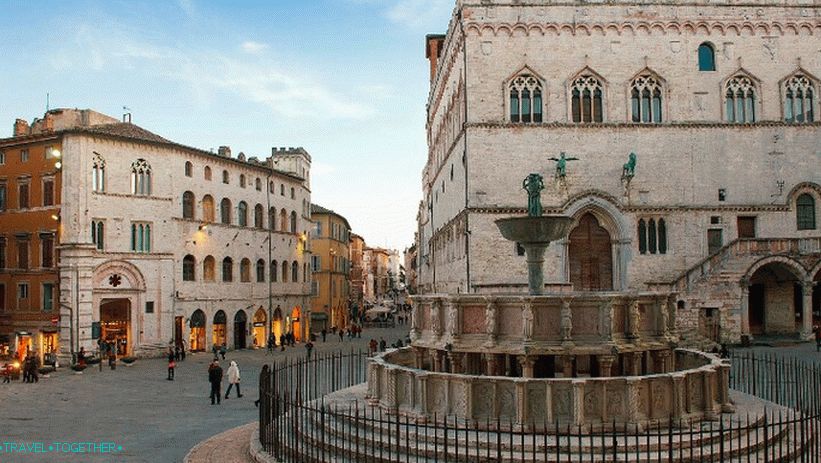 Square November IV – the central square of Perugia and the heart urban life from ancient times. In the era of the Romans was here forum. In the Middle Ages, was formed the area on which go five streets Piazza is surrounded by wonderful old buildings. The highlight of the square is the fountain Maggiore, built in the 13th century and considered one of the most beautiful medieval fountains in Italy. Beautiful stone sculptures made by famous Tuscan. Pisano masters. On the west side of the square is the archbishop’s palace, in whose walls it is now located natural history museum. Medieval street Via delle Volte will lead to the square Fortebraccio. 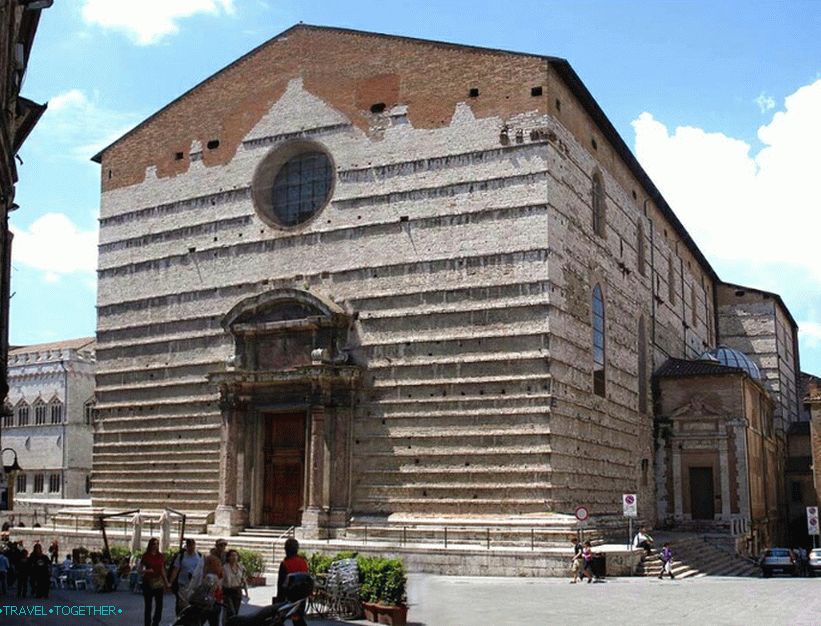 San Lorenzo – the cathedral dedicated to one of the saints patrons of the city. It was built between 1345 and 1490 in gothic style. It is interesting that both the side and the main facade still not finished. The interior is designed in late gothic style, It has a beautiful choir, an ancient stone pulpit from the 14th century and divided by large pillars. In the sacristy, to the right of the main altar, are the frescoes of the 16th century by di Pesaro. East of the cathedral is the church of San Severo with frescoes by Raphael. 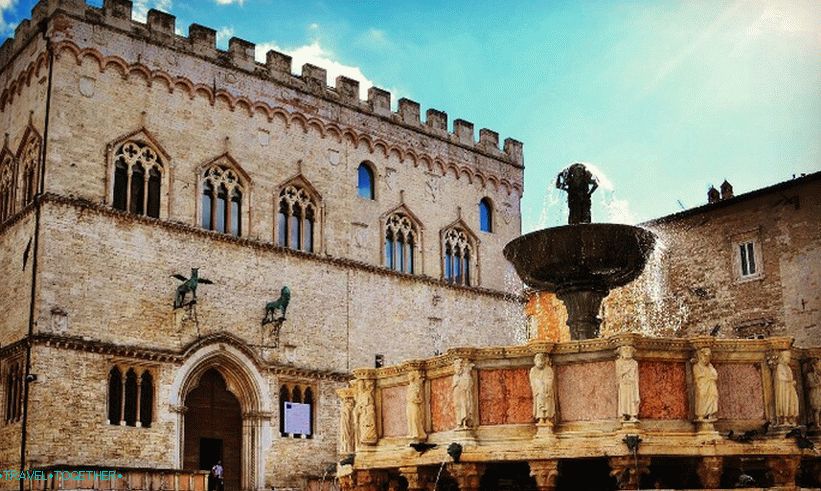 Palazzo dei Priori – the most beautiful building on the main square Perugia. This is a big palace in the Italian Gothic style of the end. XIII and early XIV centuries. Griffin (symbol of Perugia), bronze lion The 14th century and the chains on the facade signify victory over Siena. On the first floor is a beautiful room with ancient frescoes. Very near located the building of the Collegio del Cambio with frescoes Perugino.

On the third floor of the Palazzo is the National Gallery of Umbria. Here are the works of outstanding masters of the Umbrian School. paintings – Perugino, Pinturicchio, including Benedetto frescoes Bonfigli, as well as sculptures of di Cambio and di Duccio. Gallery demonstrates the development of painting in Umbria from the Middle Ages to the 20th century. 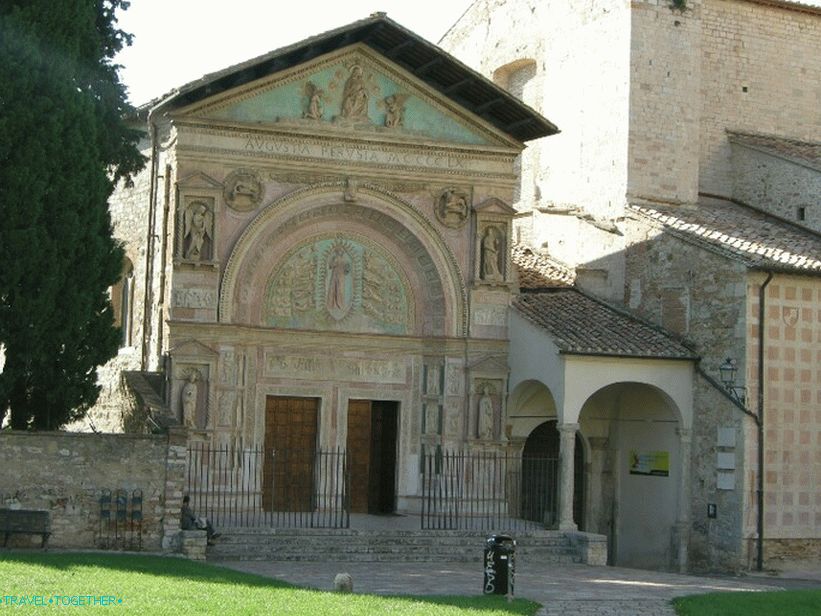 San Bernardino – medieval oratorio with a magnificent facade from colored marble, limestone and glazed ceramics. By author The facade is Agostino di Duccio, who also participated in Construction Tempio Malatesta in Rimini. Semicircular bas-relief in The central arch is the most important work of the Renaissance in Perugia. Saint Bernardino of Siena, who preached here, was canonized in 1450, and local Franciscan monks built a shrine to honor him. 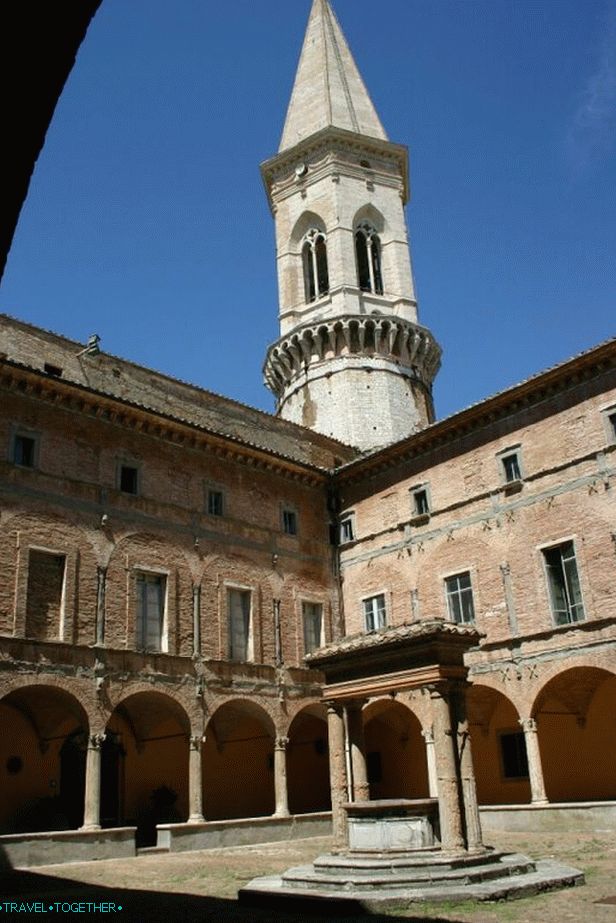 San Pietro is an early Christian church rebuilt in the 12th century. The church has Gothic wooden choirs, performed between 1535 and 1591 years, and ancient columns. Choirs are considered among the best in kind of in Italy. Gold-plated wooden ceiling dates from 16 century. The interior is decorated with frescoes and paintings by Perugino, Vasari, Reni and other artists. The sacristy presents paintings by Raphael, Perugino and Parmigianino. Near the church are the same name 14th century gate.

San Arcangelo is an early Christian temple built between fifth and sixth centuries. Located near the ancient northern homonyms gateway Includes 16 columns with Corinthian capitals that previously were used in the pagan temple. Church architecture early Romanian with some Byzantine influences. Here you can see interesting early christian symbols including pentagram at the entrance and crosses in the style used later the Templars. 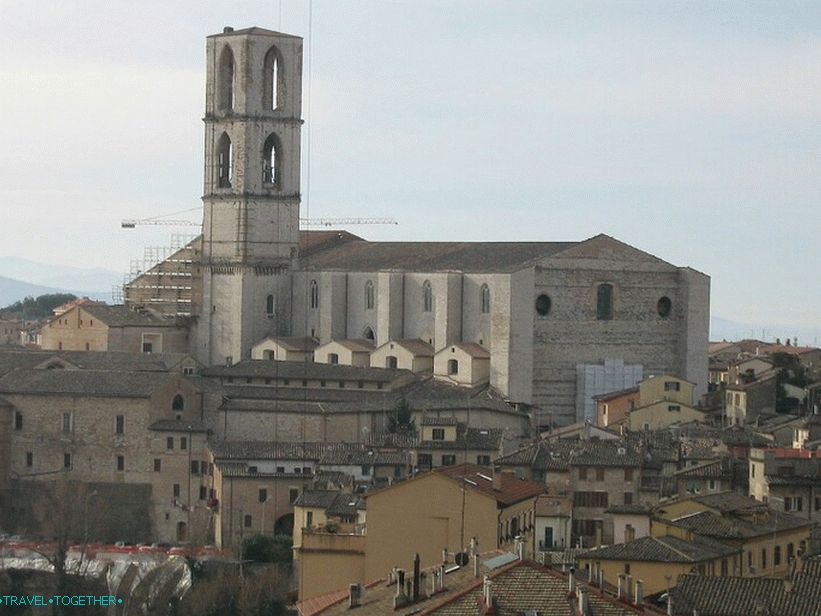 San Domenico is a gothic brick church. First building It was built in 1305, but in 1614 the nave and vaults collapsed. Reconstruction of the church continued from 1621 to 1634 years. Style San Domenico was an example and inspiration for later San Lorenzo. The temple contains valuable works of art (choir, remains of ancient frescoes, beautiful altar). Here is the tomb Pope Benedict XI of the 14th century, who is considered one of the most beautiful gothic tombstones.

In the former Dominican monastery that adjoins San Domenico, is an archaeological museum with valuable and rare Roman and Etruscan antiquities. Some of its exhibits date back to the 2nd millennium BC.

The Arch d’Agusto – an ancient Etruscan arch, built in the 3rd century before AD and restored under Emperor Augustus in the 1st century before AD (in whose honor, in fact, was named). Inscription “Augustus Perussia” on the gate dates from this period. August managed to take Perugia only after a 7-month siege. Gate arch connect two trapezoid towers. Loggia at the top was added to the Renaissance, and the fountain was completed in 1621 year 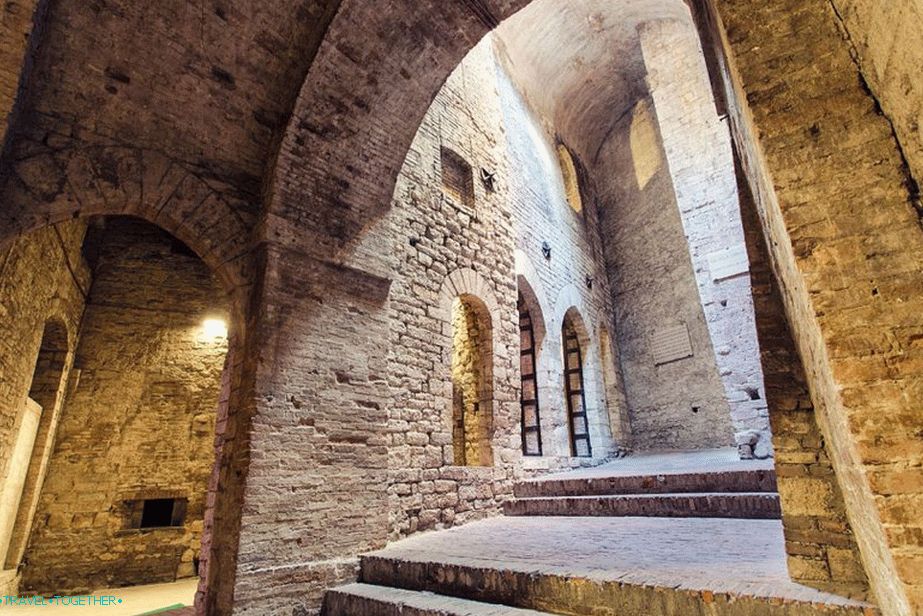 The fortress of Paul III – an ancient fortress and a symbol of papal authority until 1860. It was built on the instructions of the Pope to make in Perugia a safe haven like the castle of saint angel in Rome For the construction of this fortification was more than 100 family-owned buildings were destroyed Ballion, who hated Paul III. After the unification of Italy The fortress was demolished. Until our time, only a portion has survived. bastion. 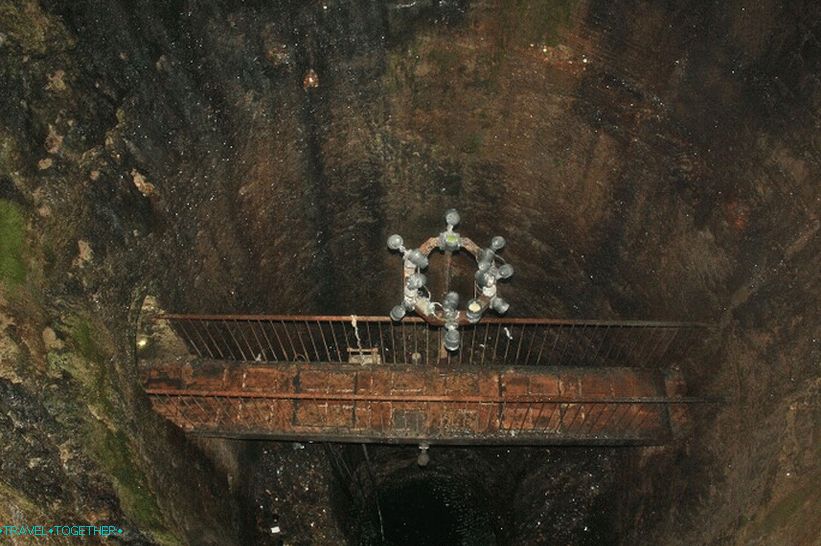 Etruscan Well – a well of 37 meters deep and 5 meters in diameter, dated to the 3rd or 4th century BC. Huge construction was used as a water tank. The well is open for visiting. Its bottom is covered with travertine, the same material used for walls. The facility is located on the square. Dante

Perugia on the map of Italy