Patras (Greece) – the most detailed information about the city with photos. The main attractions of Patras with a description, guides and cards.

Patras is the third largest city of Greece, located on northwest of the Peloponnese peninsula. Thanks to geographic The state and large port is considered the “western gate” of the country. Patras is the largest city in the Peloponessa with a vibrant nightlife, a large university and several interesting historical sights. The symbol of the city is the medieval a castle located on a hill above the historic center and a church St. Andrew. Not far from Patras are the ruins of ancient Olympia and the picturesque coastal town of Nafpaktos.

Patras are located in the south-western part of Greece Peloponnese peninsula on the shores of Patraikos Bay. Distance to Athens about 180 km. The climate is Mediterranean. Summer is warm but not roast. Winters are mild with an average temperature of 5-10 ° C.

Patras were founded in the 6th century BC. immigrants from Sparta. Although modern research suggests the first settlements, dating back to the third millennium BC In the year 62 AD was here the apostle Andrew the First Called was martyred. In the Roman period of Patras turned into one of the most important trading cities in the Mediterranean. Under the Romans, an odeon, an amphitheater, engineering system. 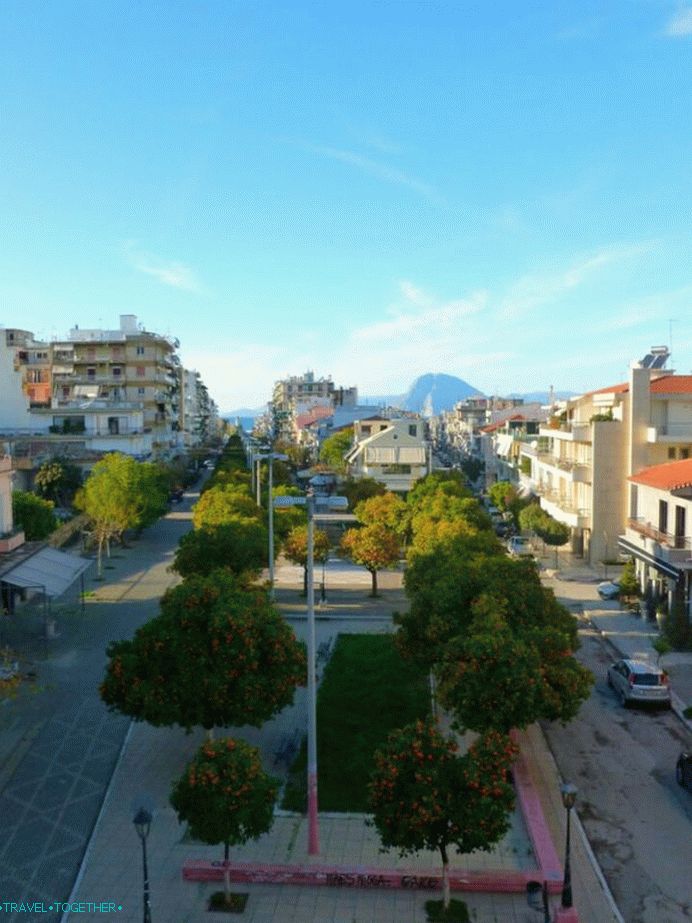 In the 3rd century BC the city is in decline. New flowering patr started in the 9th century. In 1205, the city became owned by the Achaean the principality. From 1408 to 1430, the Venetians ruled the Patras. AT 1458, the city was captured by the Turks, and in 1687 again came under the rule of Venice. In 1715, Patras became again part of the Ottoman Empire. Greek city became in progress the war of liberation in 1821-1829. Castro Castle – a medieval castle on the site of the ancient acropolis, founded in the 6th century during the reign of Justinian. Situated on a hill 800 meters from the sea and is the symbols of Patras. Castle served administrative center and defensive outpost in the period reign of Byzantines, Franks, Venetians and Turks. All of them rebuilt and strengthened this building, so you can see fragments of various historical periods. Castle has area of ​​more than 20 000 km2. Represents triangular structure reinforced by towers and ramparts. Church of sv. Andrew – one of the largest religious buildings in the Balkans. It was built in 1974 and is dedicated to the holy Apostle Andrew the First-Called, who was crucified in Patras. The central dome rises to a height of 46 meters and on it A 5-meter gilded cross was erected. Odeon – Roman theater, built in 160 AD By According to eyewitnesses, the beauty of jewelry was second only similar to the construction of Athens. Odeon was a continuation of the ancient Agora. It was destroyed during wars and earthquakes. Odeon was open in 1889 during the excavation works and restored in 1965. Lighthouse (Faros) was built in 1999 in the style of historical authenticity near the church of sv. Andrew. The Rion-Andirion Bridge is the longest multi-span cable-stayed bridge in Europe, opened in 2004. Its length is over 2 km George I Square is the central square in Patras with two fountains on the north and south side. Was designed in mid 19th century.

Patras on the map of Greece