Pamukkale (Turkey) – detailed information with photos. Main sights of Pamukkale with a description.

Pamukkale – natural and cultural object in southwestern Turkey, listed as a UNESCO World Heritage Site. From Turkish translated as “cotton castle” and known for stunning white travertines and terraced reservoirs (baths). Interestingly, Pamukkale is one of the oldest in the world. resorts. Here you can see the ruins of ancient baths, which include to the Attalid era, the rulers of the kingdom of Pergamon. In addition, according to next to the travertines are the ruins of ancient Hierapolis with impressive theater.

Pamukkale was formed by carbonate-rich thermal waters. calcium. Their sources come to the surface of a high hill and flowing down, form lime deposits on travertines and terraced baths.

Pamukkale is located in southwestern Turkey between Izmir and Antalya near the city of Denizli. The terrain represents hilly plain. In the relief stands a high hill on which, in fact, are travertines and baths. Lime deposits formed geothermal waters with a temperature of about 36 ° C. Climate – subtropical continental with very hot summers and cool in the winter. 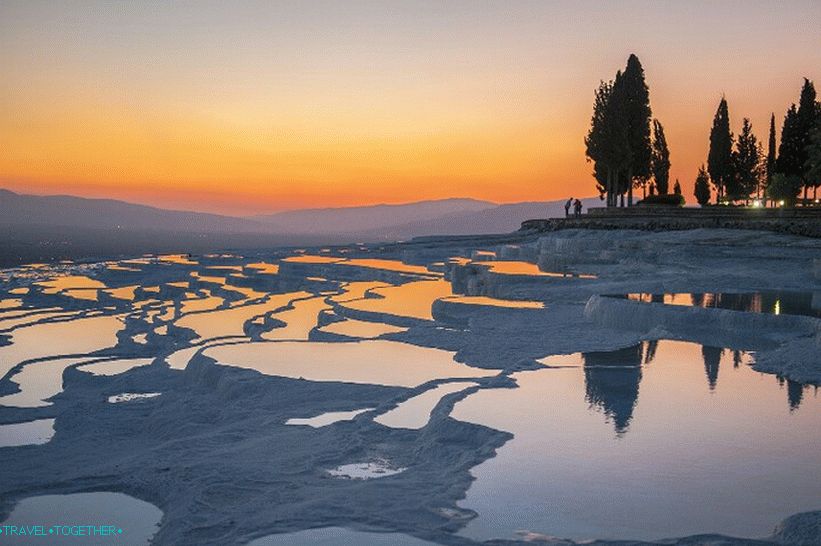 The best time to come to Pamukkale is April-May and September October. In summer it is very hot.

The antique resort of Hierapolis was founded at the end of the 2nd century BC. the dynasty of Attalides, who ruled Pergamum. In 133 BC the city comes under the power of Rome. In Antiquity, Hierapolis is somewhat once was destroyed by earthquakes, but rebuilt. In roman period this resort was also very popular with aristocrats. 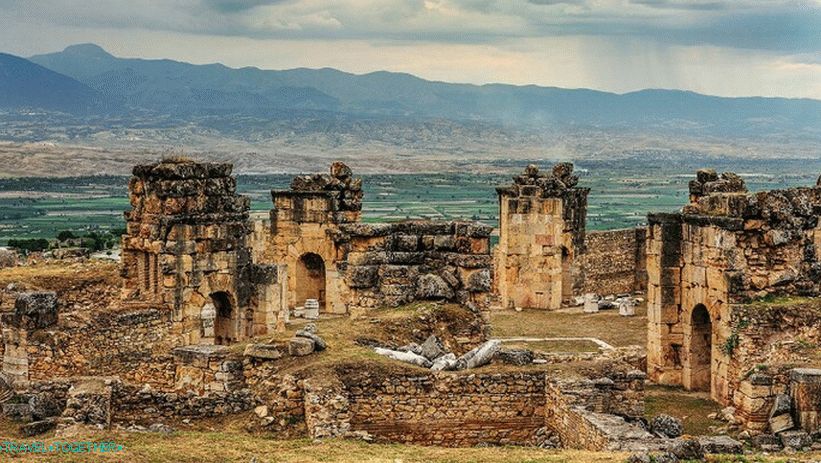 In the year 80 AD here was crucified by sv. Philip, one of 12 apostles Constantine the Great made Hierapolis the capital of Phrygia. AT Byzantine period, the city played an important role in the region. In 1210 Hierapolis became owned by the Turks. In 1354 it was destroyed strong earthquake and abandoned.

The nearest airport is in Denizli, 65 km from Pamukkale. It has regular air service to the airport. Istanbul An alternative option may be Izmir Airport, located 250 km. Denizli and Pamukkale has an excellent bus service with almost all major cities Turkey

The main attraction of Pamukkale is the snow-white travertines and terraced turquoise water baths. Also here you can look at the imposing ruins of ancient hierapolis, which is one of the oldest resorts in the world. 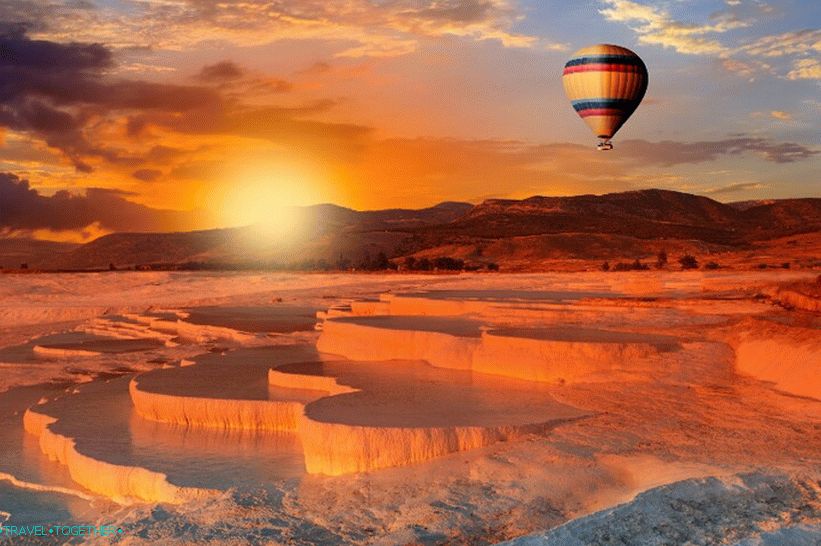 Travertine limestone deposits are very fragile, therefore walking here you can only barefoot.

Interestingly, the name Pamukkale originally referred only to medieval castle of 11-12 centuries, which is located between the ruins of Hierapolis and travertines. Currently from the castle only ruins remained. If you come here at sunset, you can admire the superb views of the travertines and baths Pamukkale. 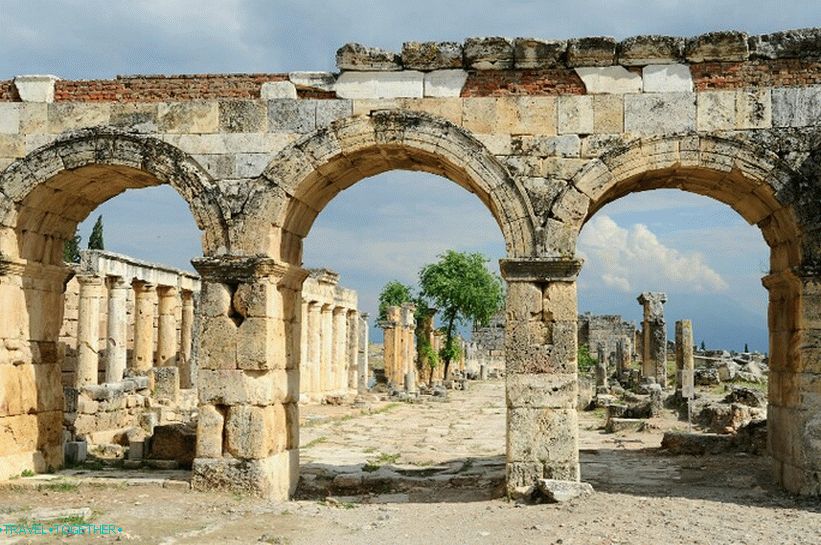 Another famous attraction of Pamukkale are Antique Hierapolis, founded by the rulers of the kingdom of Pergamon in 2 century BC The city has been destroyed several times in its history. earthquakes. After the last earthquake in 1354, he was will leave. Now Hierapolis is an impressive antique ruin. Here are preserved fragments of the gate, colonnaded streets, necropolis, the temple of Apollo, the Byzantine church, the agora. 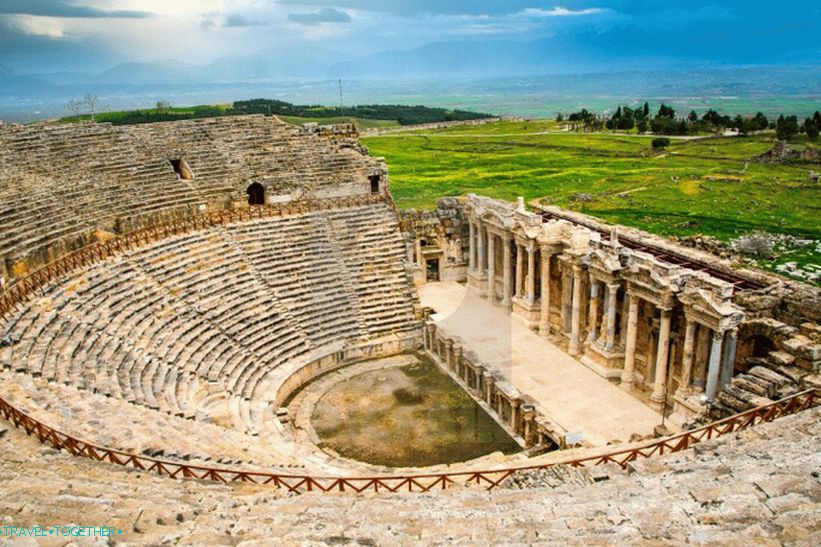 The most significant (and one of the best preserved) the construction of Hierapolis is the ancient theater. He towers to the hill above the ruins of the ancient city. The theater was built by the Romans in period of rule of Adrian and Septimius Sever. This is a monumental the structure has 26 rows of seats. From the top tiers fantastic view.

All archaeological remains are kept in the museum, which is located on the territory of the ruins in the building of the ancient Roman term. 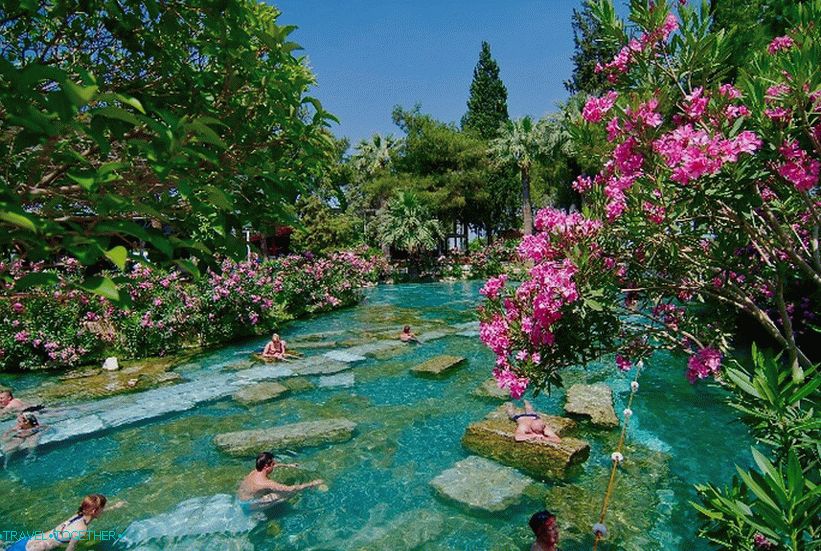 Cleopatra’s pool – antique pool with warm mineral water (36 ° C) and marble columns that are scattered along its bottom.

Swimming in the pool charge – 50 lire.

Ancient cities in the vicinity of Pamukkale 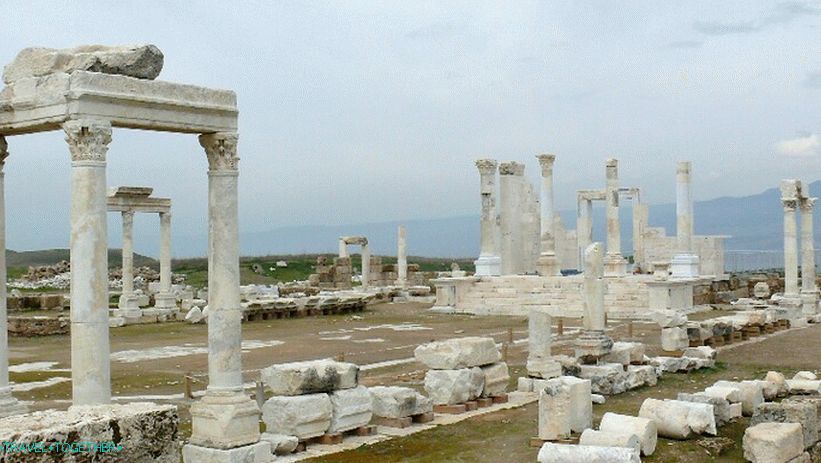 Laodicea – the ruins of an ancient Roman trading city that was home to Cicero. Here are preserved fragments of the early Roman settlement and the period of Byzantium. 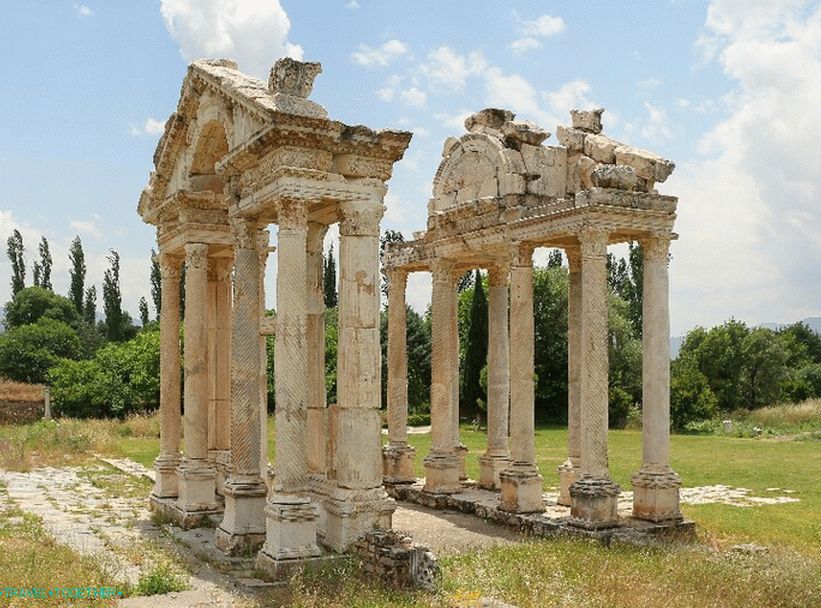 Aphrodisias (Aphrodisia) – one of the most famous archaeological objects in Turkey. Already in the early bronze age here located Assyrian trading colony, which in Hellenistic and Roman period turned into a major city. Aphrodisias became the center of the cult of Aphrodite. This greek goddess here was built a large temple, which in the 5th century was transformed Byzantines in the Christian Basilica. To the north is the ancient a stadium that could seat 30,000 spectators.

Pamukkale on the map of Turkey