Palermo (Italy) – the most detailed information about the city with photos. The main attractions of Palermo with a description, guides and cards.

The city of Palermo (Italy)

Palermo – a city in southern Italy, the capital of the island of Sicily. It is a place steeped in ancient history and smells of the sea. cultural traditions and great gastronomy. Palermo combines beautiful architecture with breathtaking seascapes, famous for its charming squares and atmospheric streets, impressive churches and magnificent palaces, pretty street markets and cozy restaurants. Palermo is called “the most common conquered city in the world. “For several thousand years it was owned by the Phoenicians, Greeks, Romans, Arabs, Normans, Spaniards. Each of these peoples considered Palermo their own and left some mark on its streets, turning the city into a melting pot of different cultures, traditions and religions.

Interestingly, Palermo is considered one of the poorest cities among the “regional capitals” of Italy. Also the capital of Sicily deserved the fame of one of the most criminal places in the Apennine the peninsula. But, meanwhile, it is a spiritual and authentic city, which is famous for the hospitality and openness of the locals.

Palermo is located in southern Italy on the shores of the Tyrrhenian Sea in northern part of the island of Sicily. The city is surrounded by the mountain of the same name. ridge and lies in the valley of the rivers Papireto, Chemonia and Oreto. Palermo – one of the warmest cities in Europe. The capital of Sicily has Mediterranean climate with a humid, slightly stuffy summer and very warm winter. The temperature even in the coldest period is rare drops below 10 ° C.

Mondello area is popular among tourists (and local ones), located near the center of palermo. He boasts one of the best beaches in the whole city and also has a noisy atmosphere and hospitable character. On the streets leading to the beach, scattered numerous eateries.

The ideal time to visit Sicily, and in particular, Palermo – This is May, June, September and October. If the main goal is not beach holiday, you can safely go in the winter, late autumn and early in the spring.

Palermo is one of the oldest cities in the world. Settlement in place The modern city was founded in the 8th century BC. Phoenicians. Then the Greeks settled here, and in the first Punic war here located the main military fleet of Carthage. In the year 254 before AD The ancient city was conquered by the Romans. Palermo was part of their states until the 6th century AD In 515, the city was captured Goths, but after twenty years became part of the possessions Byzantium. 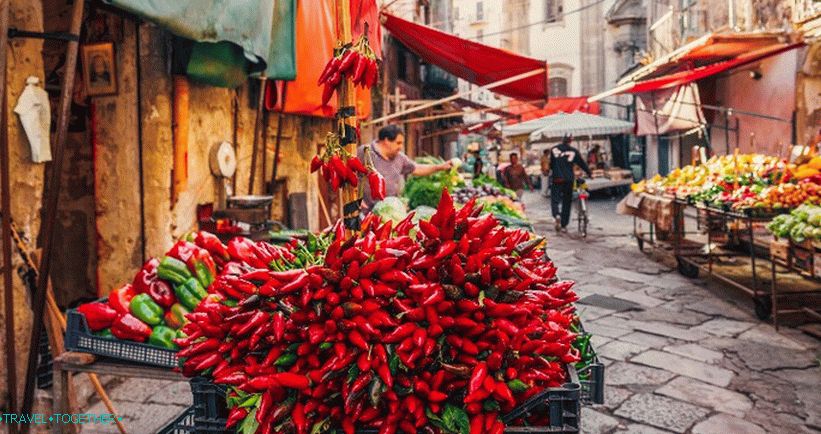 In 831, Palermo was captured by the Saracens. In moorish the period of its history the city flourished thanks to trade with the North By africa In 1072, Palermo was conquered by the Normans, who made it the capital of a powerful enough Sicilian kingdom. This period is considered the heyday of Palermo. In the second half 13th century Sicily was captured by the French for some time. Then Palermo (like the whole island) became part of the kingdom’s possessions Aragon. The Spaniards ruled Sicily until the end of the 18th century. 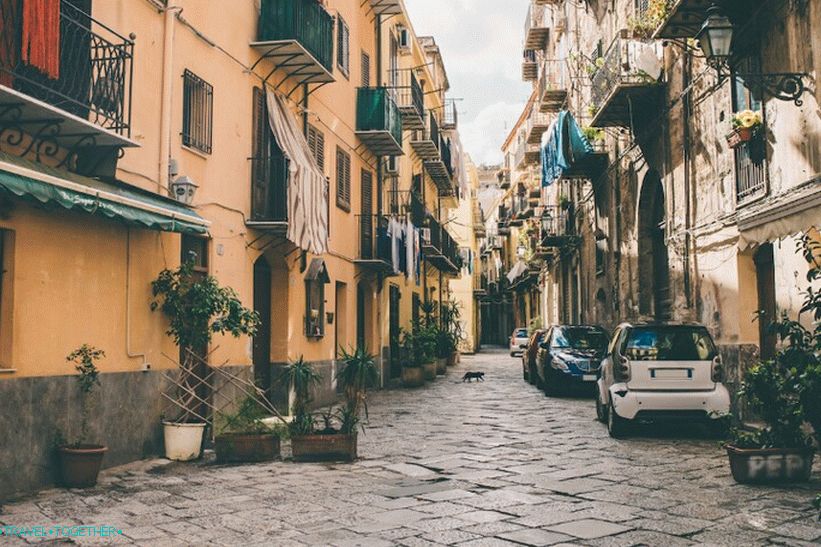 The streets of Palermo

Palermo became part of Italy in 1860. World War II much of the city was badly damaged.

The international airport is located 30 km west of Palermo. is he accepts flights from most major cities of Italy and some cities of Europe. From the airport to Palermo the easiest way to get to bus (Prestia e Commande).

The capital of Sicily has a ferry service with Genoa, Naples, Malta and Cagliari. There are also trains from Rome and Naples to Palermo, who use the ferry in Messina. 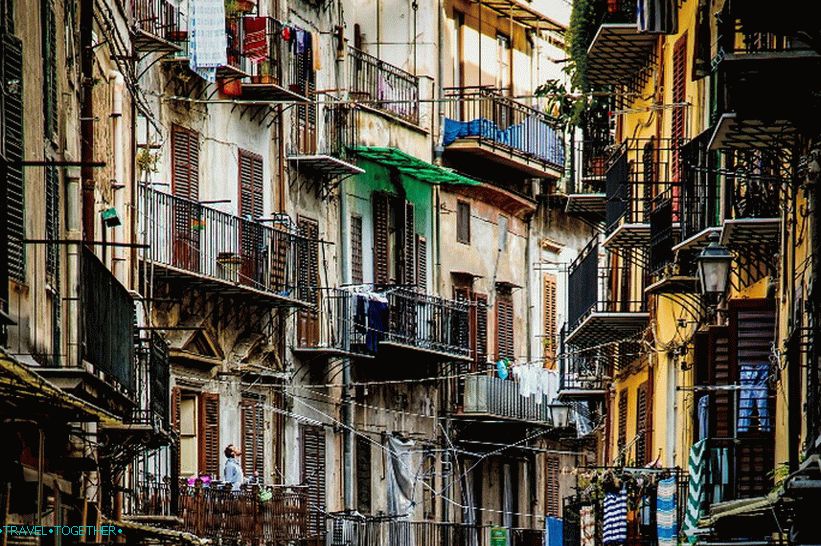 Palermo, unlike Rome, Florence, Venice, Milan, is not ranked among the most popular Italian cities. Although by atmospheric, the number and variety of attractions, monuments of history and culture, the capital of Sicily is not inferior them. Palermo is also known for a huge number of churches (there are more than 250). Some of them are sacral masterpieces. architecture. 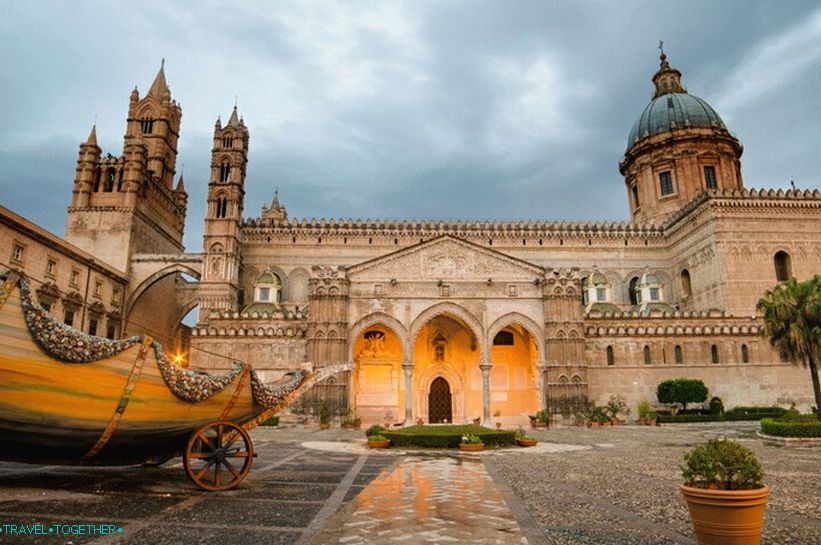 The Cathedral is the main sacred monument of Palermo, listed as a UNESCO World Heritage Site. it a magnificent ancient church, founded in the 12th century and preserving original norman character. The building has an impressive facade, which is an interweaving of gothic elements, Moorish and Spanish architecture.

One of the columns of the cathedral has an early Arabic inscription, Affirming that the church is built on the foundation of the Moorish mosques. The bell tower dates from the 12th century, but was rebuilt in 1840. year The royal box with which the Sicilian kings welcomed the people after the coronation were also built in the 12th century and changed in three centuries. Among the numerous artifacts of the cathedral especially stand out the tombs of the Norman Hohenstaufen. 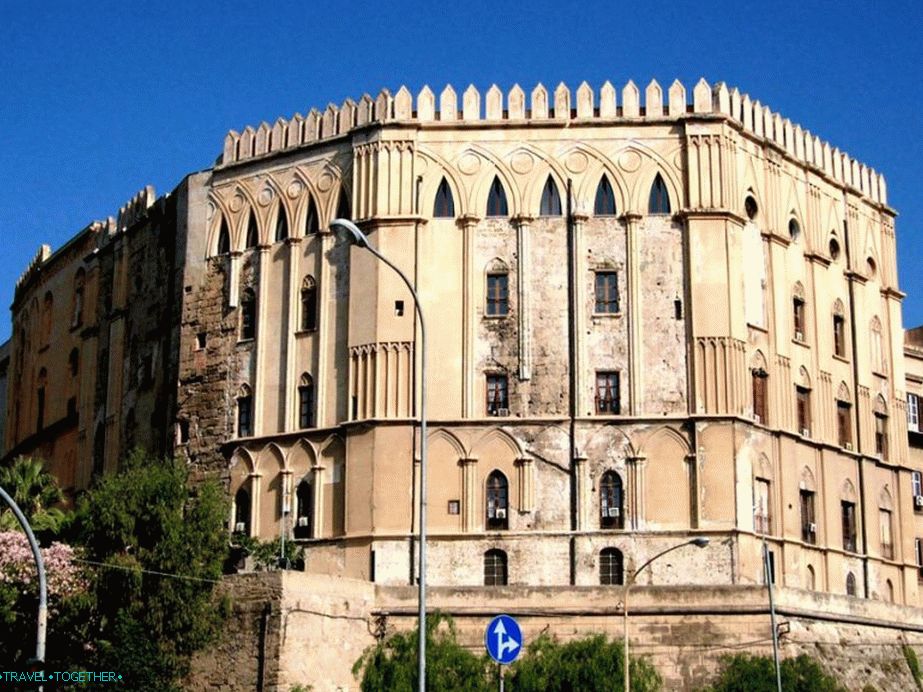 Palace of the Normans

Palace of the Normans, also known as the Royal Palace – one of the most famous landmarks of palermo. it monumental building was built by Frederick II on the foundation The ancient Saracen construction. In the period of existence Sicilian kingdom here was the residence of his rulers. The palace was significantly expanded and rebuilt by the Spaniards, representing a synthesis of medieval and later architecture.

Outstanding in the northeastern part of the palace Norman building – a tall tower with neat square stone blocks and blind arcades. Square yard built at the beginning of the 17th century, surrounded by three floors of arcades. 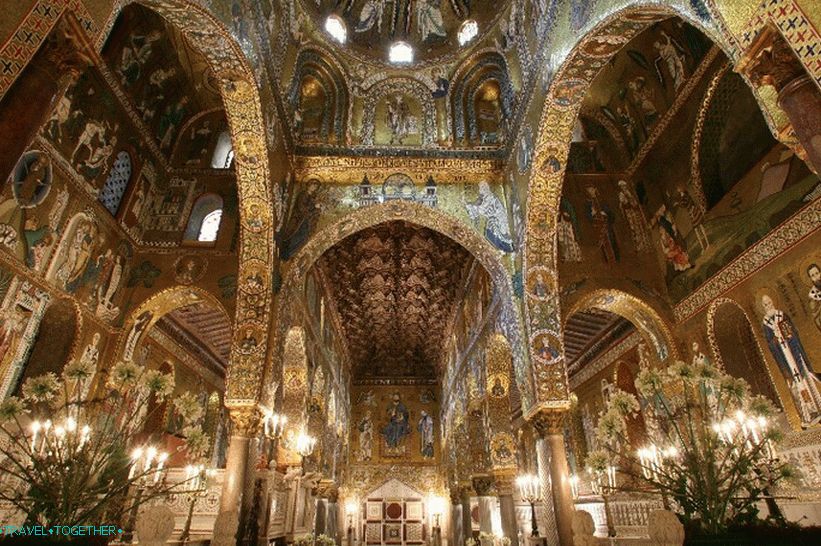 The Palatine Chapel – a masterpiece of medieval architecture, which is a unique fusion of Norman, Arabic, Byzantine and Romanesque styles. This is the court church Sicilian kings, consecrated in the 12th century. Despite all the changes that took place over the centuries, its interior is not lost overall harmony. This small three nave basilica, before of all, known for its magnificent interiors, in which medieval mosaics stand out. 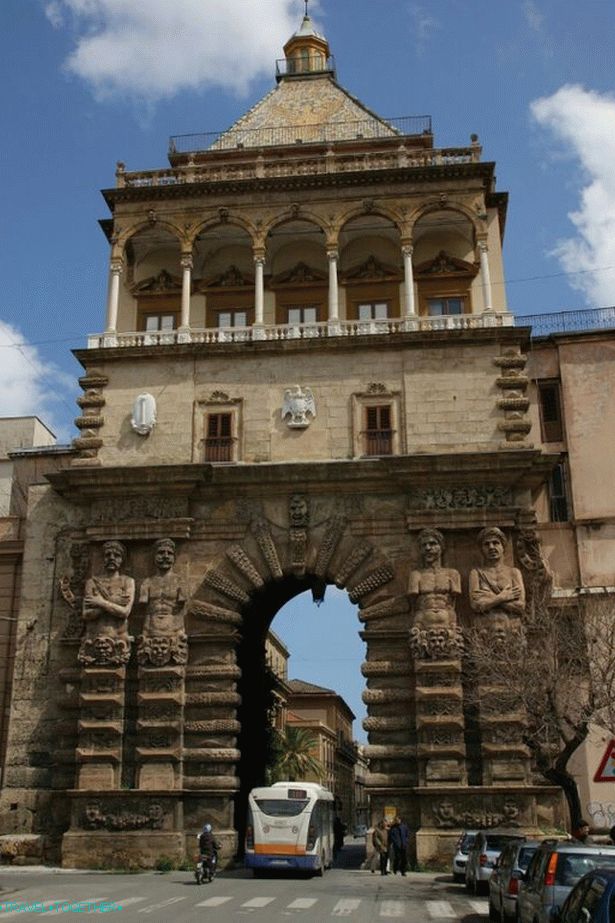 New Gate – a magnificent ancient structure with an impressive façade located west of the palace. 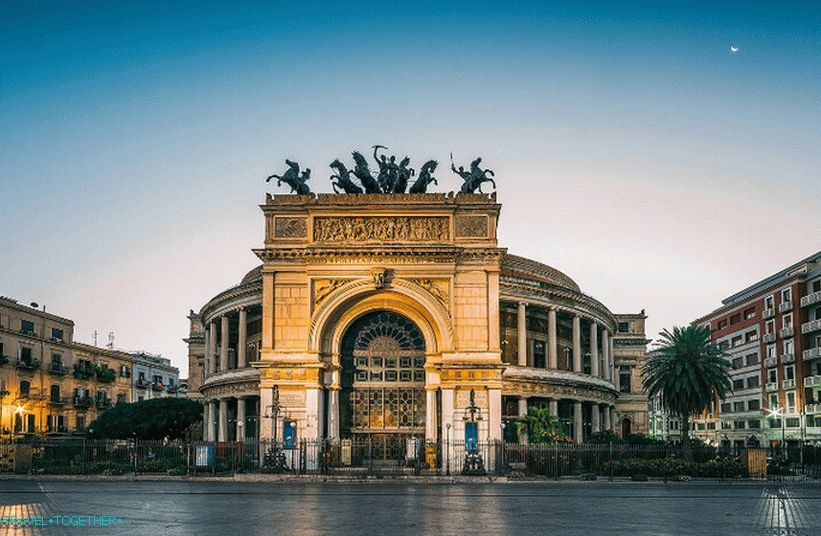 The Polytheama Theater is a wonderful example of neoclassical architecture, built in the second half of the 19th century. 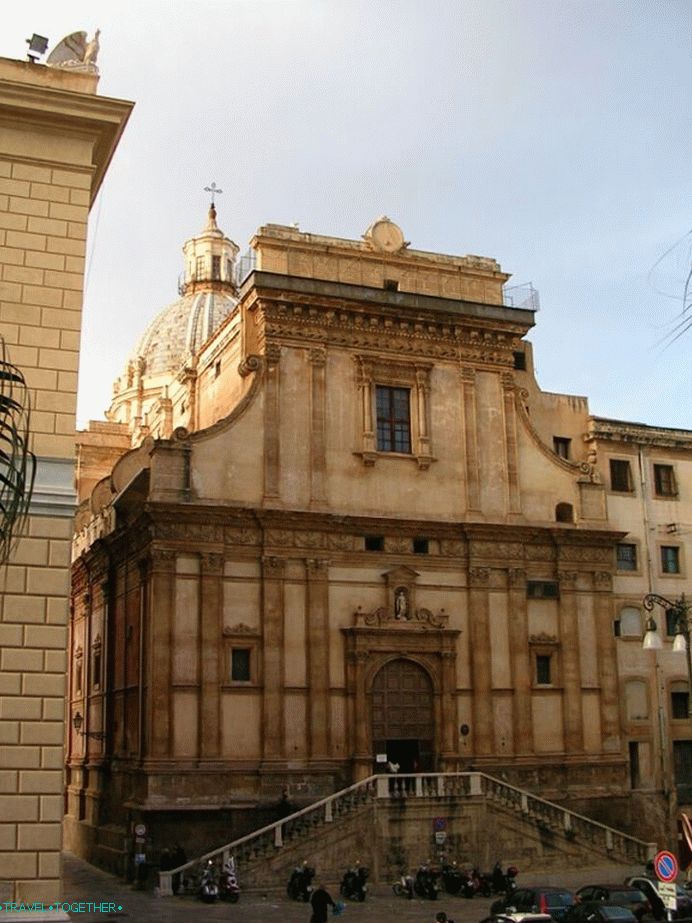 Church of sv. Catherine – sacred building in the heart Palermo, built in the 16th century. It is a synthesis of styles. Sicilian Baroque, Rococo and Renaissance. 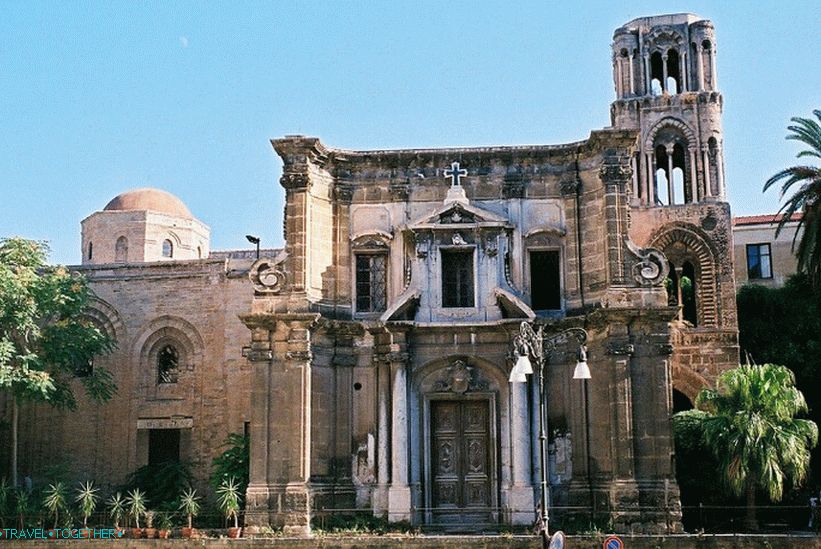 Martorana is a medieval religious building founded in 1143 This sacred monument is a building in Arabian-Norman style. Baroque facade added together with a bell tower after an earthquake in the 1720s, a bit out from this concept. The church has a Byzantine structure and 12th century magnificent mosaics that are among the most ancient in Sicily. 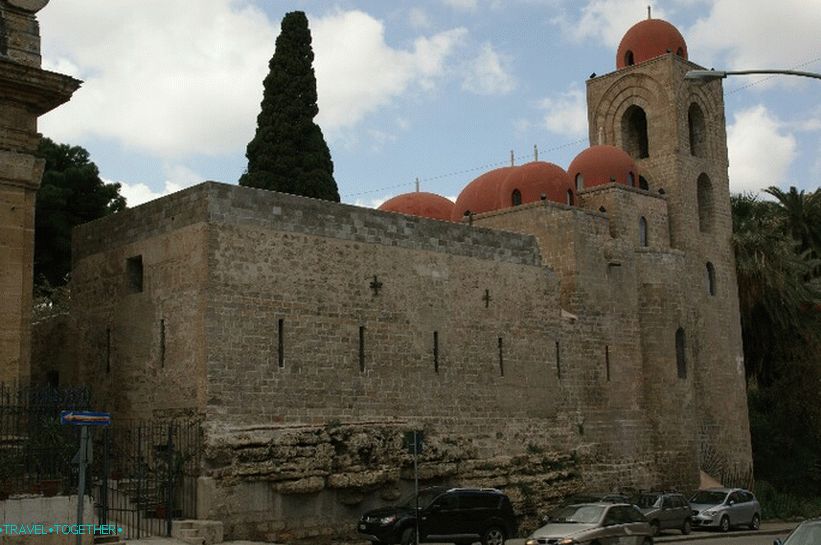 San Giovanni is an ancient monastery founded in the 6th century. AT Moorish period a mosque was built here. Then normans re-consecrated this place and in 1132 erected a square church with a strict interior, topped with five domes. 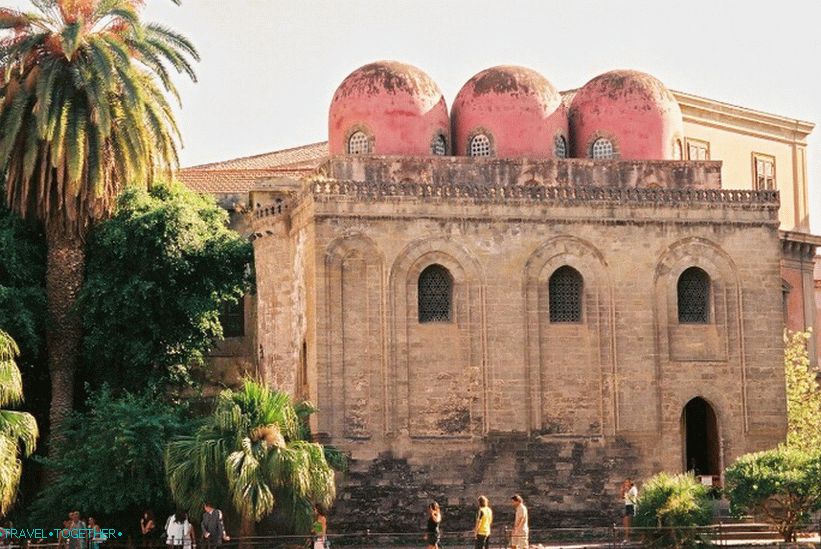 San Cataldo – a monument of medieval religious architecture in Arabian-Norman style. The church dates back to the 12th century and is different. bright red domes above the sublime central nave. Building has a strict interior, inlaid floor and Corinthian capitals on four ancient columns. 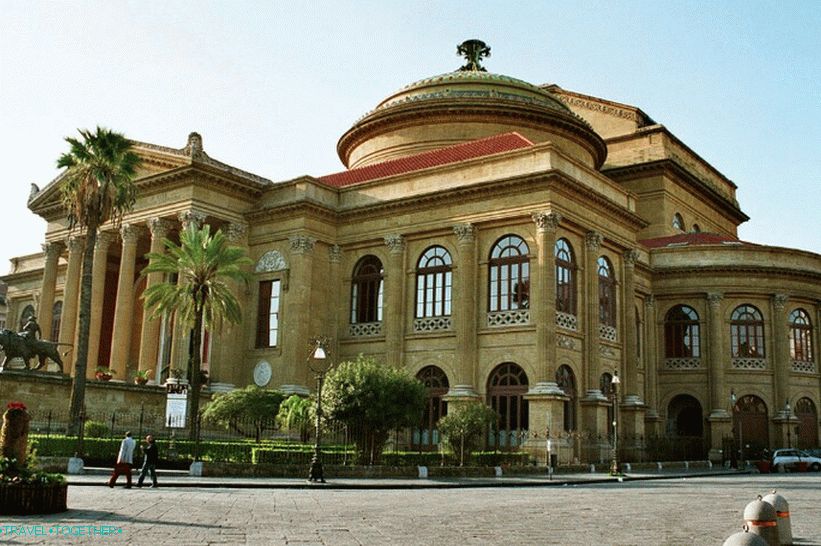 The Massimo Theater is the main opera house of Sicily and one of the most bright neoclassical buildings in Italy. The theater opened its doors to 1897

Palermo has an impressive archaeological museum, located behind a small 17th century monastery. His collections are incredible. ancient artifacts, among which are Arab and Phoenician items. 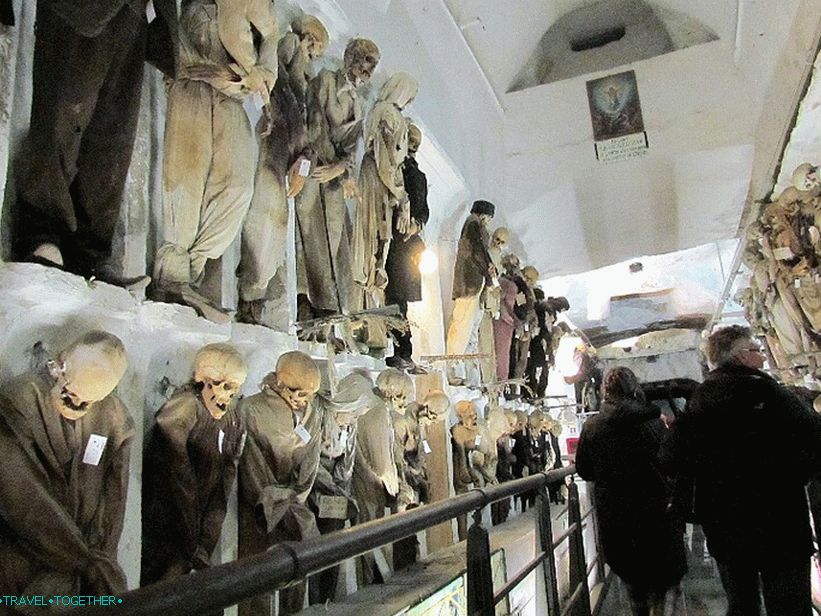 Capuchin catacombs – one of the most unusual and a bit creepy the sights of palermo. These underground passages are located under abbey and were carved into volcanic rock in the 17th century. The catacombs were used for burial until 1881. Inside is a dark scene of 8,000 mummified corpses, ordered by gender and status, lying in aisles or hanging in niche walls. 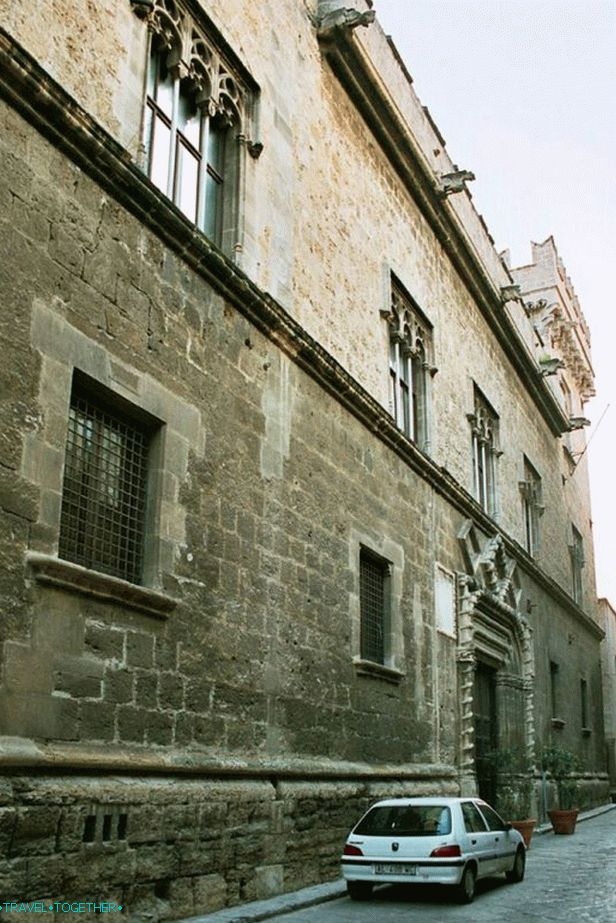 Abatellis Palace (Patella) – a building in the style of the Catalan Gothic, built by Matteo Carnelievari in 1490. From early 16 to mid 19 centuries here was a monastery. Now within the walls of the palace there is an art gallery that includes works of outstanding Sicilian craftsmen. 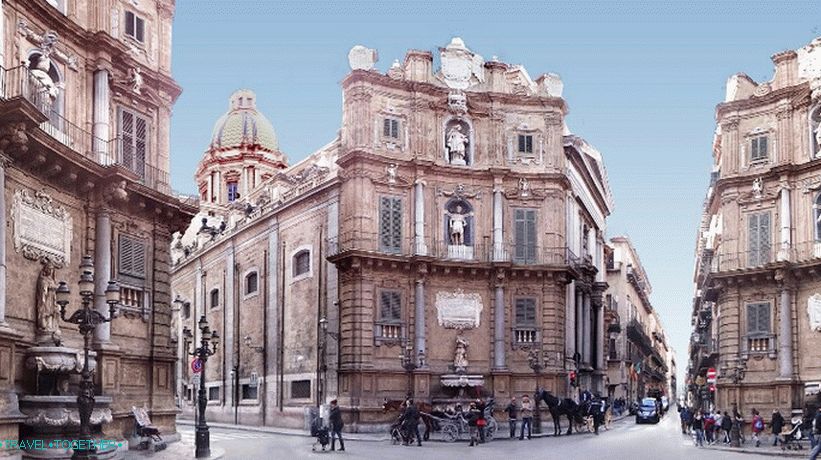 Quattro Canti – one of the central squares Palermo, which is an outstanding example of Sicilian baroque. This urban space was built in the first half of the 17th century according to the design of the roman architect Lasso. Square has an unusual octagonal shape. Facades of the buildings forming it decorated with sculptures.

Behind one of the palaces is hidden the baroque church of San Giuseppe dei Theatini is a large basilica built between 1612 and 1645 for years. 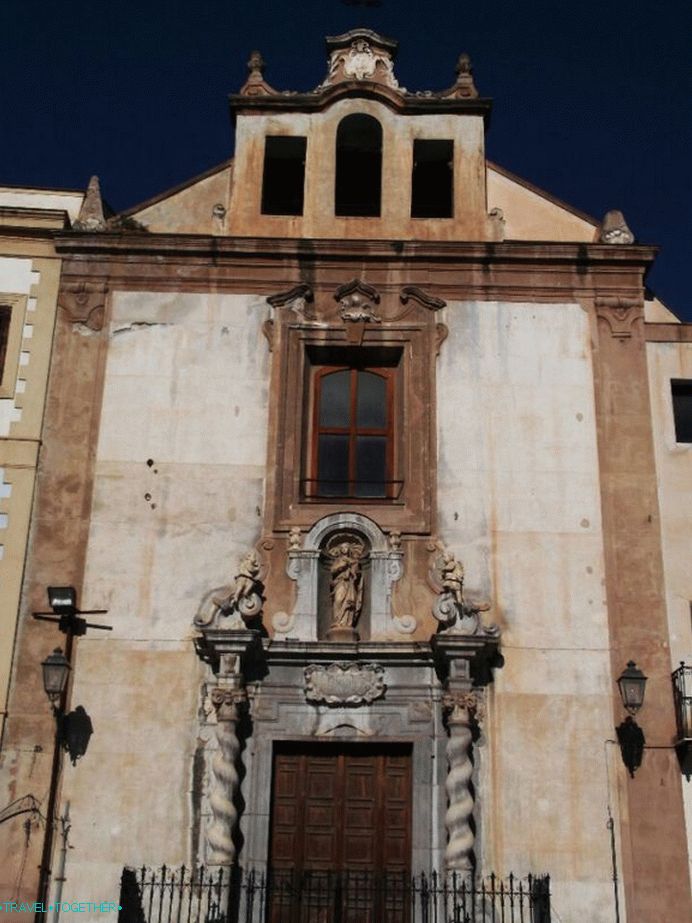 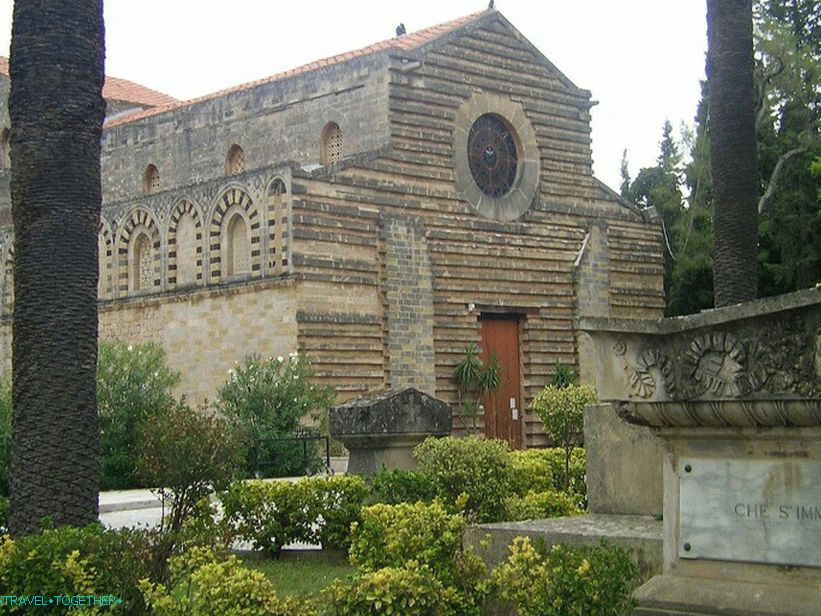 The church of Santo Spirito was built in 1173-78 as the oratorio of the Cistercian abbey outside the medieval walls. In 1282, the Sicilian Supper began in front of the building, which ended with the expulsion of the French. 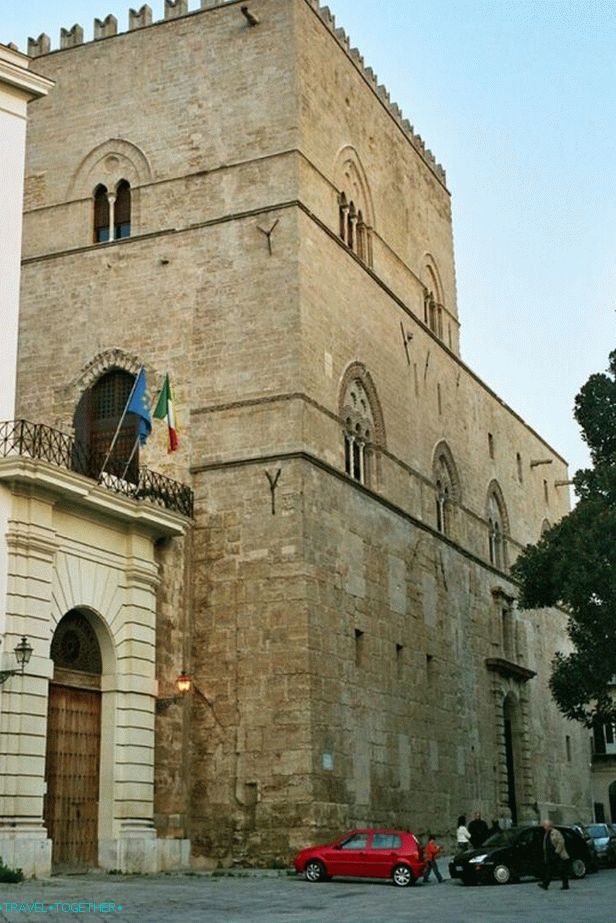 Chiaramonte Palace – a medieval building built in the 14th century for a powerful noble dynasty. Palace served as residence the governor was between 1468 and 1517, then courts were held here inquisition, and since 1799 – ordinary courts. This is a massive stone the building with the square courtyard is now a museum.

Palermo on a map of Italy