Padua, Italy – detailed information about the city. Guide to Padua: popular attractions with photos and descriptions.

Padua – a city in the Italian province of Veneto, located in the valley of the river Po, 20 km from the Venice lagoon. It is a beautiful The old city, where you will find many attractions original and interesting places and delicious cuisine. It is very convenient here stop when traveling in northeastern Italy so how Padova is favorably located near the tourist mecca – Venice and Verona, and prices for hotels and food here are significantly lower. The founding of Padua dates back to the gap between the thirteenth and eleventh centuries BC and is associated with the civilization of the ancient the Greeks.

There is a legend that after the mythical Trojan War one of the leaders of Troy, Antenor, fleeing from the Greeks, sailed down the Po and founded the Padus village in the marshland (from the Greek. – swamp).

During the time of the Roman Empire, Padus, later called Patavium, became an ally of the Romans and became rich thanks to the successful location at the crossroads of trade routes. Padua turned into one of the largest cities of the Empire.

In 601, Padua was destroyed to the ground by the king. Agilulf, and then again in 800 by the Huns. After that the city was almost abandoned – residents scattered around the neighborhood, many went to Venice. After the fall of the Roman Empire, the territory fell under the rule Lombards. They completely changed the social structure and introduced feudalism.

At the same time, Catholicism begins to gain momentum. In the city of steel to build temples, Padua began to revive and grow rich. At the beginning of the 11th century in defensive structures are being built in the city, public and religious buildings.

At the beginning of the 13th century, a university was formed in Padua. In the 14th century Padua has become one of the cultural capitals of all of Europe – here worked Giotto, taught Averroes and Avicenna.

At the beginning of the 15th century, Padua came under the rule of the Venetian of the republic. For almost two centuries, the city has become one cultural centers throughout the region.

After the Napoleonic Wars, the city and region fell under the influence of Habsburg and remained under him until the unification of Italy.

How to get to Padua

Padua is located almost in the center of the Veneto region between the cities Treviso and Venice. If you get to Padua by plane, i.e. three options – airports in Venice, Rimini and Milan. The closest – Marco Polo Airport in Venice. If you go by train, then all trains go to Padua routes Milan – Venice and Bologna. Schedule and cost tickets can be viewed on this site -www.trenitalia.it.

If you go by car, then from Milan and Venice is highway A4, from the south of Italy – A13 (Bologna).

As in many cities in Padua there is a tourist tax, which can be included in the price, and not (need specify when booking). In 2016, the following is installed tourist tax:

Padua city transport is represented by buses, trams and Taxi. Tickets can be purchased at numerous kiosks. Bus in the streets Padua

In Padova, you can find hotels, hotels and guest houses on any taste and wallet. In the city and the surrounding area there is a large number of colorful hotels. We recommend booking accommodation in historic center or in the surrounding villages of Padova. Padua cuisine is represented by old culinary traditions. In addition to pizza, which is traditionally associated with Italy and occurs everywhere we recommend to try – horse meat dishes, cheeses, bigoli, paduan chicken, focaccio, false parsuto, sweetspazientini and zaleti. From alcohol – local the wine. 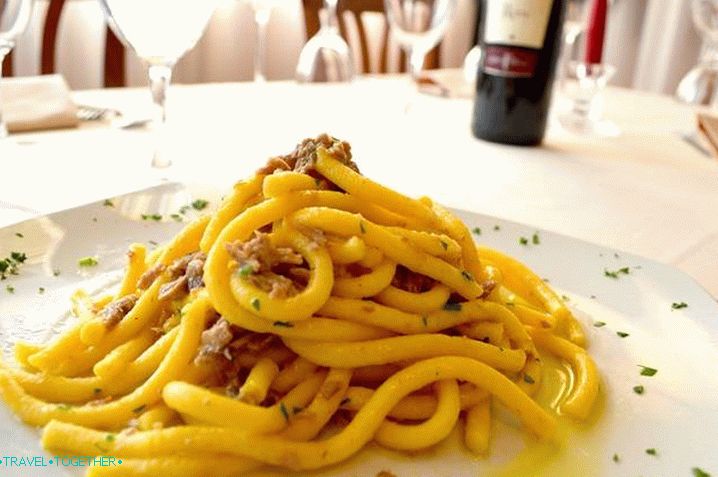 As in most ancient cities, the main Padua’s attractions are located in the historic center. Especially for most Italian cities because they often developed around the ancient Roman or medieval defensive walls.

Despite the fairly decent size, all major Padua’s sights are within walking distance. Although if necessary, you can use the buses that ride you around the sights. But we recommend to walk, as it is pleasant to walk around the city. Here there is no abundance of tourists in Rome, Venice, Verona, Milan, you can quietly enjoy the city and its interesting places. Also here quite a lot of pedestrian areas.

Eremitani Square is an old square in Padua. Here is located a large regional museum, which contains interesting collections Roman, pre-Roman, Etruscan and early Christian periods. Also here are valuable art objects. Among them stands out a masterpiece of Giotto – Crucifixion. Another attraction of the square is the chapel. Skroveni, built at the beginning of the 14th century and painted with brilliant Giotto. Many original frescoes are perfectly preserved.

The frescoes of the chapel Skroveni

Also on the square is an old church of the 14th century, the Palazzo. Zuckerman and the Museum of Applied Arts.

San Antonio Square and the Basilica of St. Anthony

Square in the historic center of Padua, adjacent to the main Cathedral of the city – the Basilica of St. Anthony. Basilica – Home architectural dominant of the historic center and the largest cathedral Padua, the main center of worship of St. Anthony of Padua. Basilica built in the 13th century in baroque style. In her painting took part Altiquiero da Zevio, Jacopo d’Avanzo, Stefano da Ferrara (Stefano da Ferrara), Girolamo Tessari. To the left of the basilica is Donatello’s masterpiece. – bronze equestrian monument dedicated Venetian commander. Prato della Valle is the largest square in Italy and one of Europe’s largest, almost 90,000 square meters. meters This is the main square Padua, located in the southern part of the historic center. 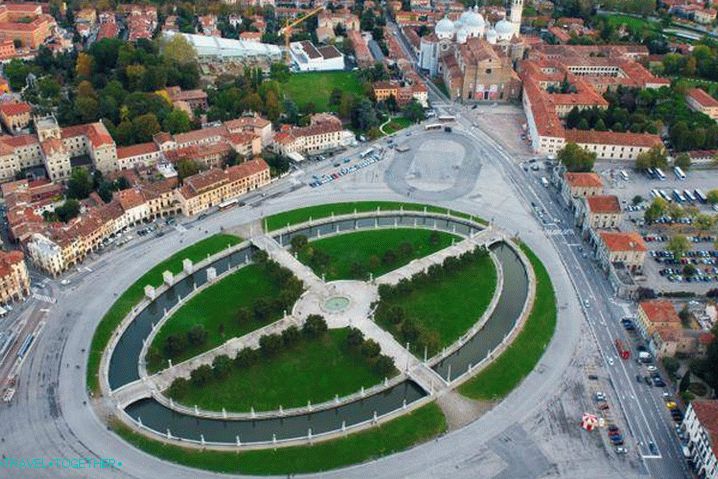 The area received its unique shape at the end of the 18th century thanks to Venetian governor Memmo. This is a huge green island, surrounded by a channel that crosses 4 bridges, and in the center located fountain. Sculptures of famous people – scientists, artists, doctors, politicians who lived, worked and working in Padua. At the very edge of the square stands the abbey of Santa Justina – a magnificent example of the Renaissance, built at the beginning of the 16th century. An impressive architectural structure with a 82 meter high bell tower The foundation of the 12th century is dominated by the architecture of the square. With it’s equally impressive inside! Not far from the square there is an old botanical garden, which collected more than 6,000 plants. South east The square is an old basilica of the 16th century.

Specola is an old astronomical observatory, one of the symbols Padua Here is the astronomical museum, and from the top a wonderful view of the city. When you spent here research itself is great Galileo. Nearby is also locatedHotel di di Michele, closely associated with the last years of the life of the famous Petrarch, and also the castle of the 13th century Carraresi.

From spekolylegko to get to the city center, in passing looking at the church of San Tommaso, the piazza Duomo and the magnificent Baptistery, painted with beautiful frescoes.

Square del Ragione – second largest square Padua. Here is the most beautiful palazzodella Ragione or Salon (large hall), one of the symbols of the city. At the southwest corner of the square there is a 15th century tower with astronomical clock. Plaza de la Ragione, della Erbei della Frutti – this is the heart of a medieval city, as well as a place of daily of the market.

The University of Padua is one of the oldest universities in Europe. founded in the first half of the 13th century. Here they taught and conducted research Galileo, Copernicus, Harvey and many others. A few steps away is the historic Caffe Pedrocchi, which has been operating since 1830.

What else to see in Padua

Bridge of sv. Lorenzo is a stone bridge 53 meters long.

Obelisk of Antenor – the legendary founder of Padua. The church of San Nicolo is one of the most romantic places in Padua. The church of the 16th century located on the old medieval square. Interesting tourist routes on the map