Nesebar (Bulgaria) – detailed information about the city with photos. The main attractions of Nessebar with a description, guides and cards.

Nessebar is an ancient town in south-eastern Bulgaria on Black Sea coast. Located north of Bourgas considered a cultural treasury of the country. Nessebar is one of the most beautiful Bulgarian cities, which has a long history and preserved architectural monuments of all periods of its millennial of existence. There are remains of Roman and medieval walls, many ancient Byzantine and Bulgarian churches, as well as old houses in the style of the Bulgarian national revival.

The most charming feature of Nessebar is its old city ​​included in the list of UNESCO World Heritage sites and located on a rocky peninsula connected with the mainland narrow a dam. The peninsula has a length of 850 meters and a width of 300 meters. New city includes the famous resort Sunny Beach, modern apartment buildings and numerous hotels.

Nessebar is located in the South-Eastern part of Bulgaria in Burgas area. The city has a subtropical climate with warm summer and in the cool winter. 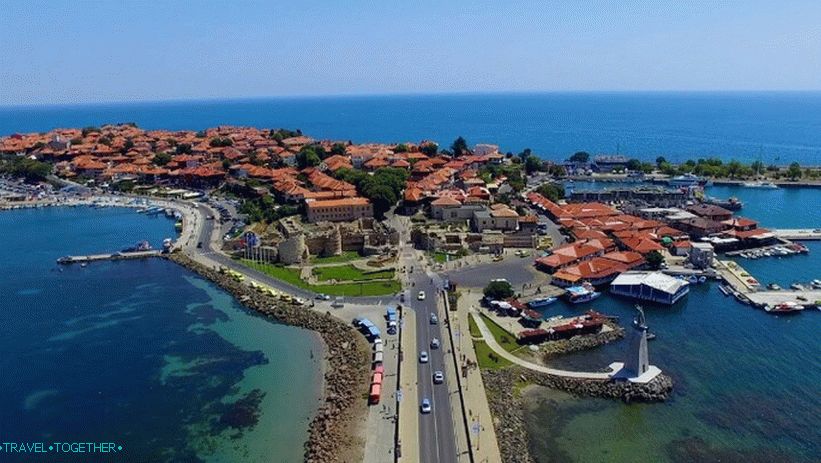 Nessebar is one of the oldest cities in Europe. Already in first millennium BC here there was an ancient Thracian settlement Mesembria. In 510 BC it became Greek a colony. The Greeks built fortifications here, Agora, Acropolis and other facilities. Most of the ancient city was destroyed an earthquake and was under water. Preserved to our time only the ruins of fortress walls and towers built of hewn limestone, as well as fragments of an agora and several buildings.

In the 1st century BC. The city was captured by the Roman Empire. Then Nessebar became a part of Byzantium. In the 9th century the city was occupied by Bulgarians and got a modern name. The greatest heyday of Nessebar reached in 13-14 centuries in the period of the Second Bulgarian Kingdom. In this period about 40 churches were built here. 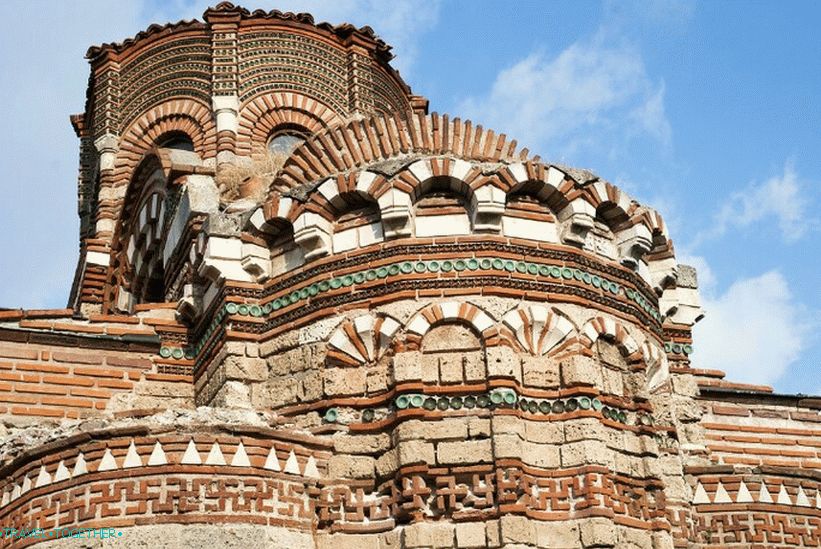 In the 15th century, Nessebar fell under the onslaught of the Ottomans. Turks destroyed it walls, as well as numerous architectural monuments. B 18 – 19 century in the historic center were built numerous buildings in style of the Bulgarian national revival.

Nessebar has a charming old town located on small picturesque peninsula. He is magnificent architectural ensemble, reflecting the archaeological and artistic influence of the Greek, Roman and Byzantine eras. The historic center of Nessebar is the intertwining of narrow paved The streets where you can meet the early Byzantine churches, fragments of ancient walls and traditional Bulgarian houses. 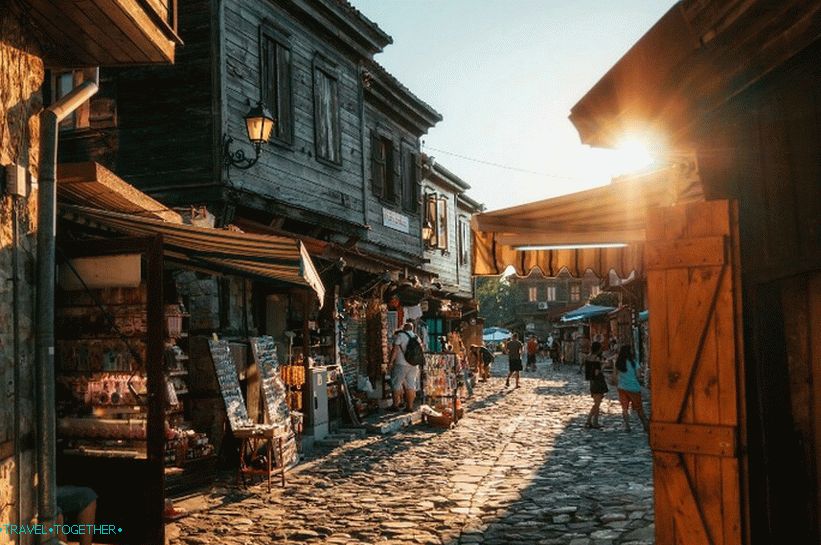 The ancients fortifications of Nessebar

Since its foundation, Nessebar has always been surrounded by serfs. walls, fragments of which are preserved to this day. First Fortifications were built by the Thracians in the 8th century BC. Later, at 5 century bc e., Greek colonists built new fortifications structures. Then the walls were reinforced by the Romans and Byzantines. Fortifications of Nessebar were destroyed by the Ottomans. Antique ruins dating mainly from the Hellenistic period include Acropolis itself, the temple of Apollo, Agora, and fragments of Thracian and more late Byzantine fortifications. 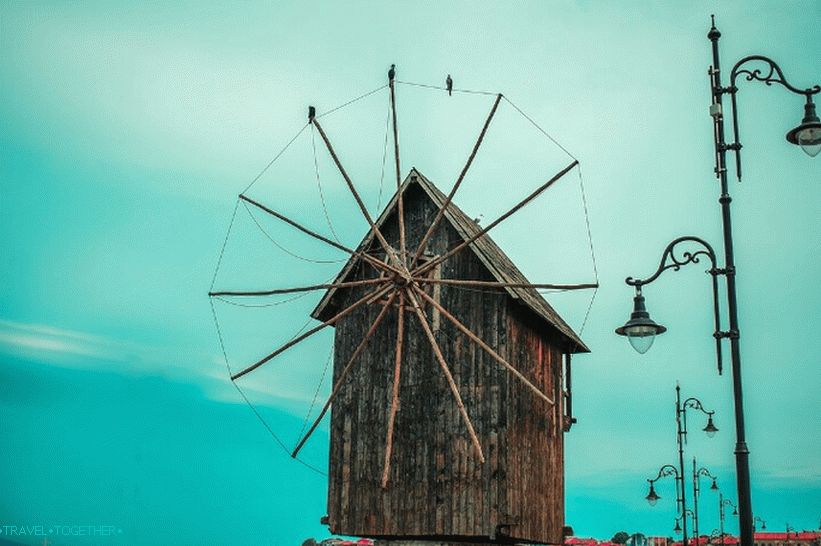 The old windmill is one of the symbols of Nessebar. Can assume that this wooden construction belongs to the era the national revival of Bulgaria and was built between 17 through the 19th century. 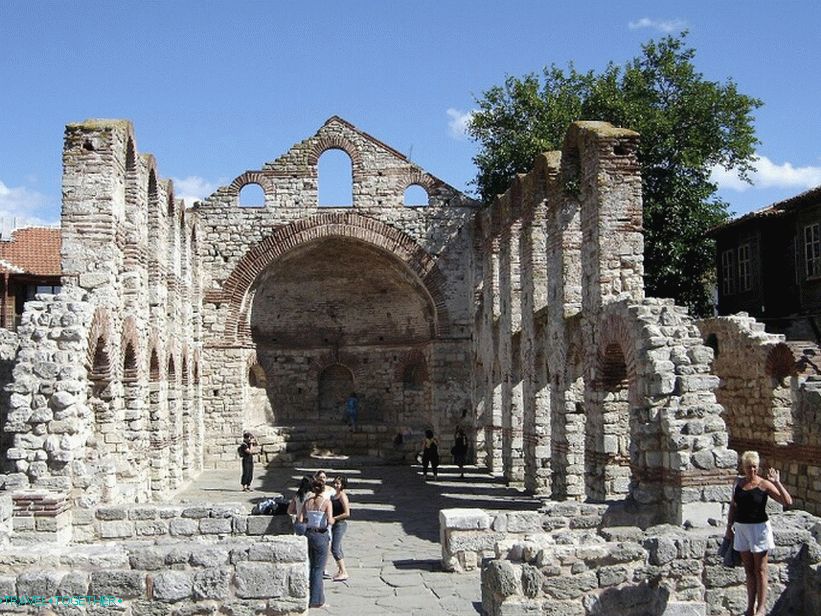 Hagia Sophia – an ancient Byzantine church, completed in the 6th century. It is a three-nave basilica with a semicircular apse, narthex and atrium. The existing structure dates from 9 century – the period of the last reconstruction. In the 13th century, the church was plundered by the Venetians and abandoned in the 18th century. Her religious Relics are now stored in the church of San Salvatore in Venice.

Church of St. Theodore (Theodore) – a small one-nave building built in the 13th century. Its facade is decorated with blind arches. from the processed stone and a brick. The space under the arches is decorated chess zigzag patterns of stone blocks. 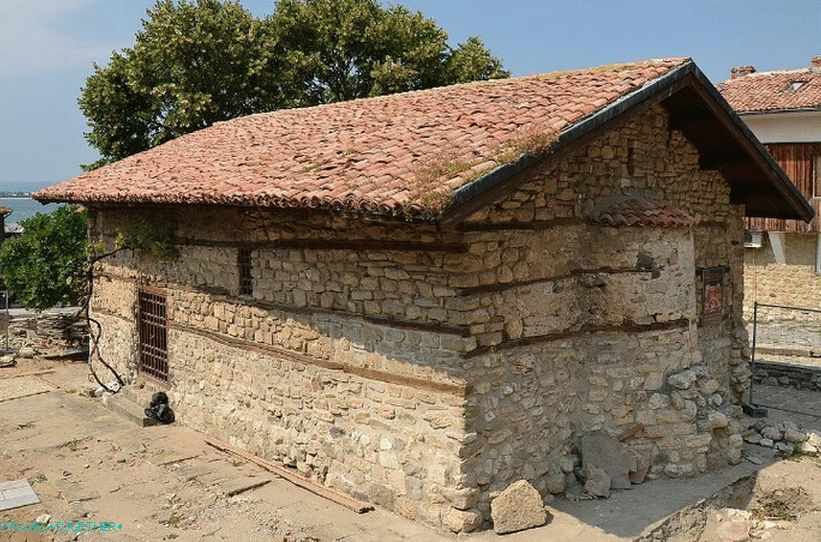 The Church of the Holy Savior – a small religious building 17th century, famous for its wall paintings. 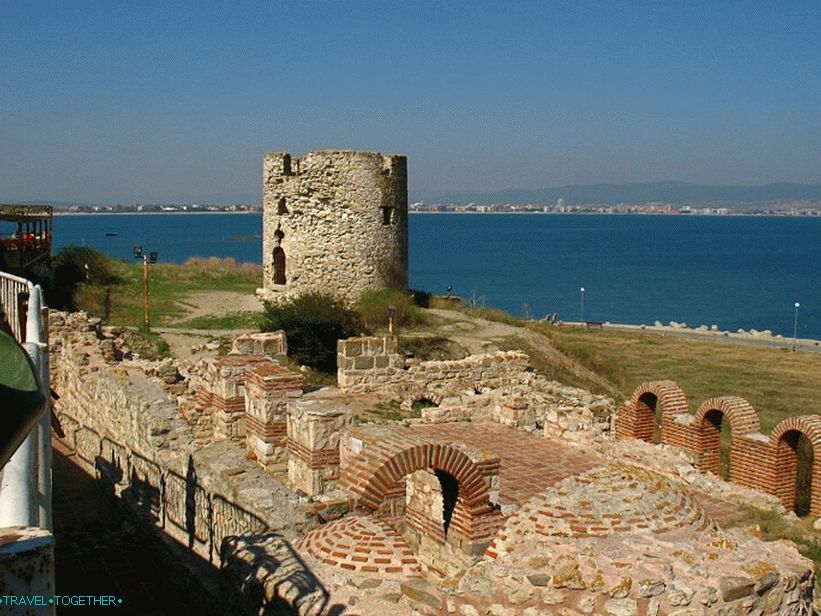 Basilica of the Blessed Virgin Mary Eleusa – church on the north side of the peninsula, built in the 6th century. Until the 14th century, it was part of the monastery that was supposedly destroyed an earthquake. 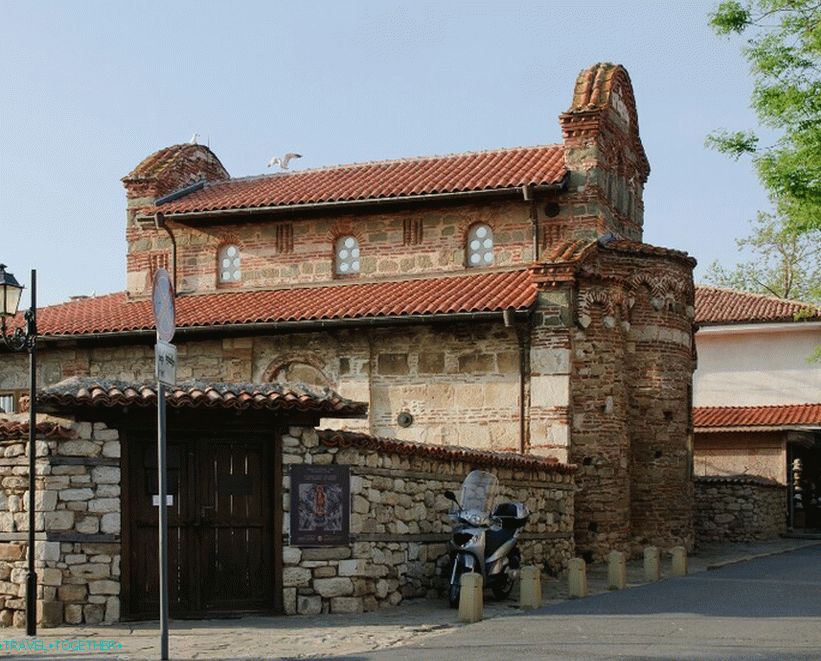 Church of St. Stephen – medieval three-nave basilica with magnificent frescoes, which is now converted into a museum. The eastern part of the building is the oldest and probably dates back to the 11th century. A few centuries later the church was expanded by adding a new structure in the west. 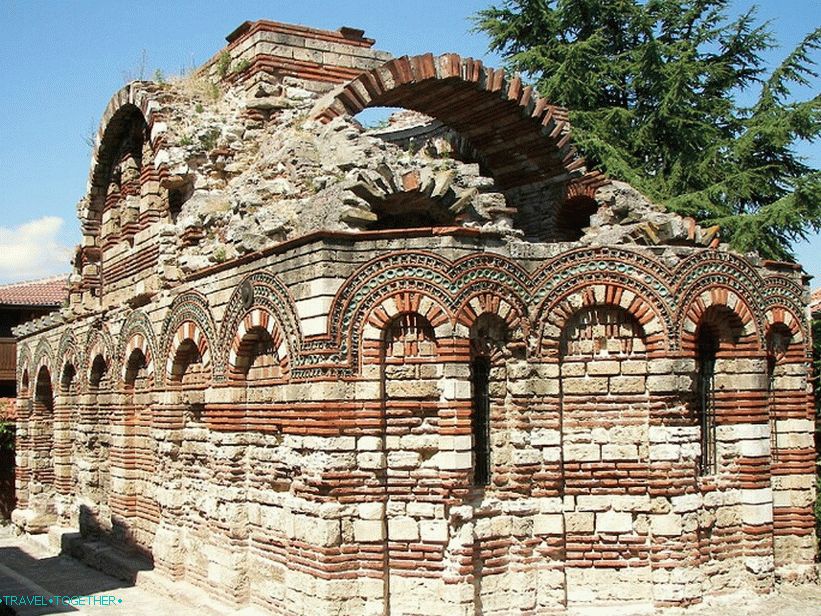 Church of the Saints Archangels Michael and Gabriel

Church of the Holy Archangels Michael and Gabriel – Medieval a church in Byzantine architecture built in 13 or 14 century. This single-nave building with three apses in the past has been surmounted by a dome and a bell tower. 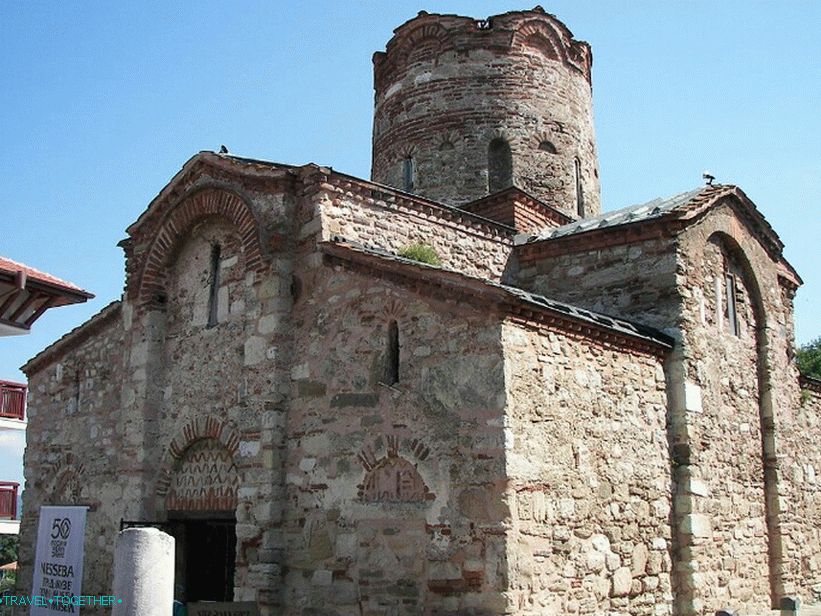 Church of St. John the Baptist – a simple building from raw stone with a dilapidated dome. This is one of The best preserved churches of Nessebar built in 11 century. 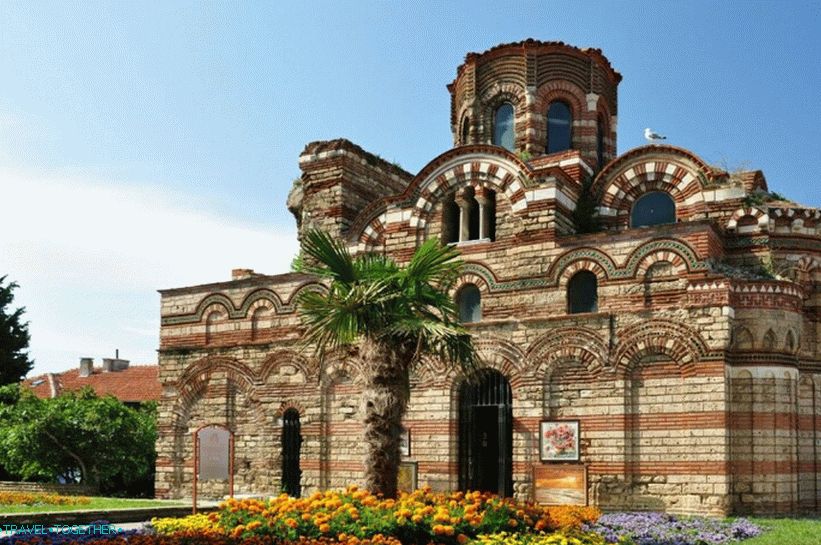 Christ Pantocrator Church – magnificent medieval church in the style of the late Byzantine cross, built in 13 – 14 century of stone and brick. The most famous feature of the temple is the rich and colorful decoration of its exterior walls.

Nesebar on the map of Bulgaria