Nantes (France) – the most detailed information about the city with photos. The main attractions of Nantes with a description, guides and cards.

Nantes is a city in western France in the Loire Land region. Is an the capital of the western part of the country and the historical region of Brittany. Nantes is a bustling modern city that is one of The largest industrial and innovation centers of France. This place rich in history and cultural heritage, many magnificent attractions and museums, castles and art galleries.

Nantes is located at the mouth of the Loire on the Armorican Rise in 50 km from the Atlantic Ocean. In the north of the city the plain passes in the hills, in the south are swamps. Nantes has a moderate marine climate with warm summers and cool winters. 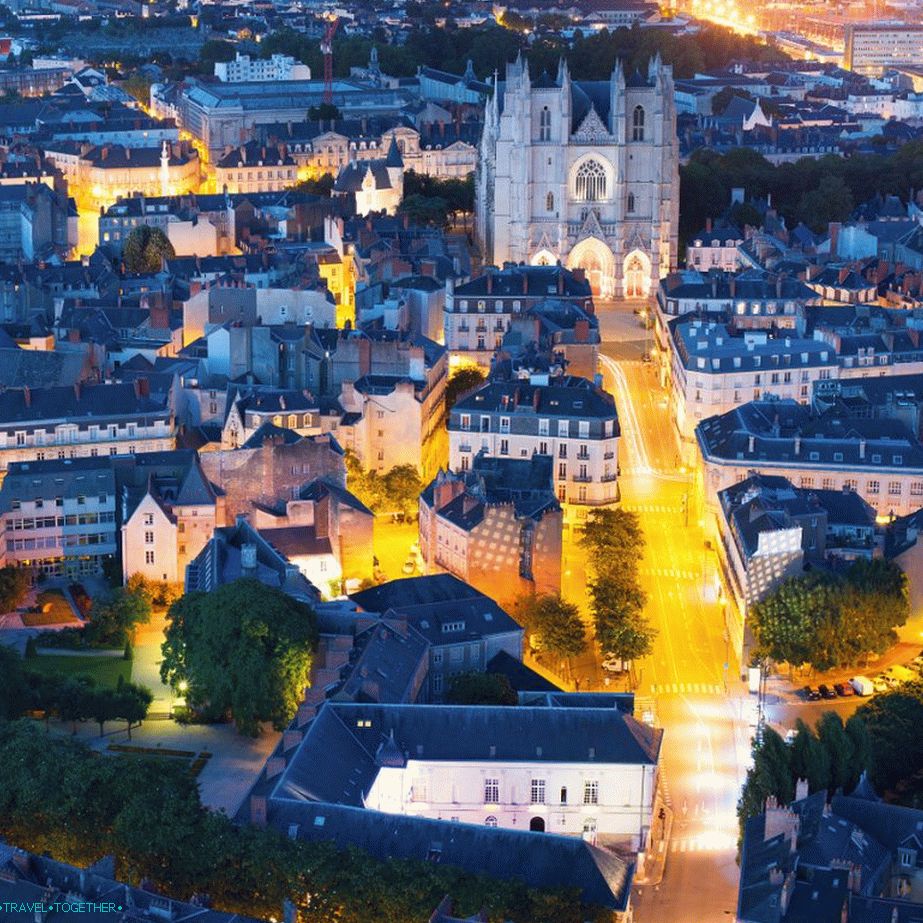 The origins of Nantes go back to the Gallo-Roman era. The city was founded between the end of the second century and the beginning of the first century BC. This settlement soon became an important port and their capital. After the capture of Gaul by the Romans, the city lost its leading position in region, which moved to the neighboring Ratiatum. In the 3rd century AD after the attacks of the German tribes of Nantes built the city fortifications that were among the largest in Gaul. Nantes remained an ally of Rome in fact until the collapse of the empire. 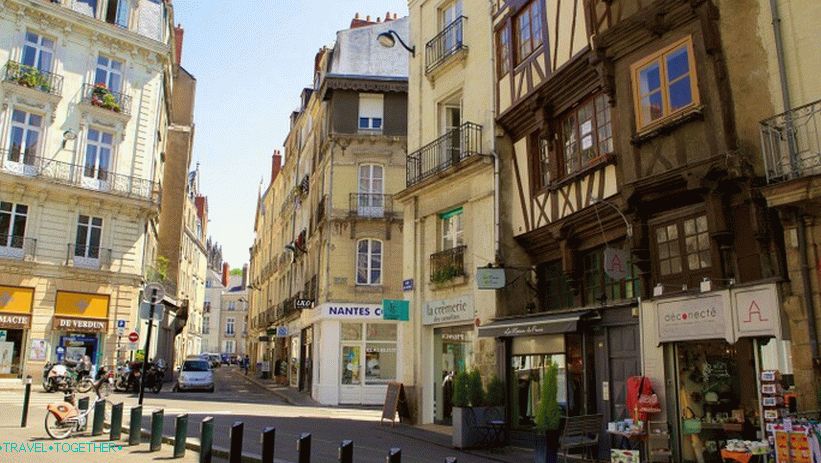 In the 5th century, the city was captured by the Visigoths, and at the end of the same century – francs. A bishopric was formed in the city. also in this period was inhabited by the legendary margrave of Roland. The city was on the border of the Frankish state and served as a defense against Bretons After the weakening of the Carolingian empire (in the 9th century), Nantes was captured by the Bretons and became their capital. He was the main city Duchy of Breton until the 16th century. 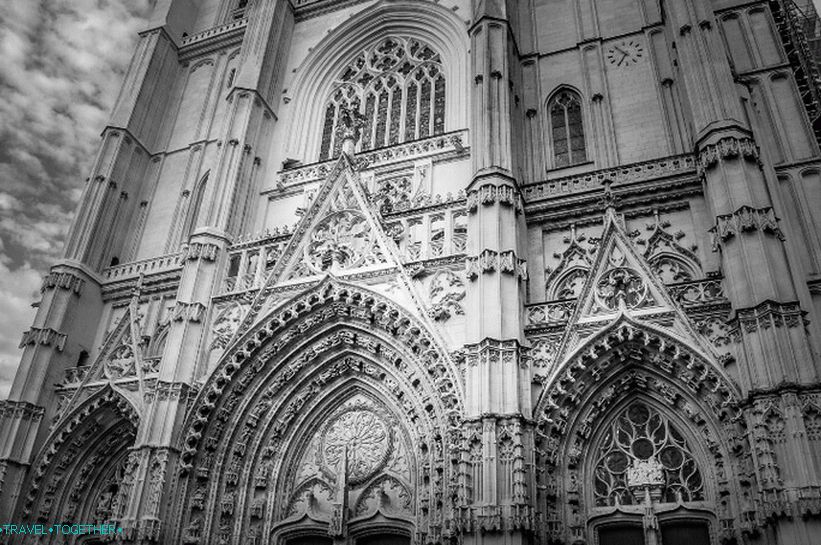 From the 16th to the 18th century, Nantes flourished through trade. In this period there were built many monumental buildings and monuments of architecture. At the end of the 18th century, the city became the center. Vandeyskogo rebellion, after which lost its former meaning, developing more as an industrial center and port.

The historic center of Nantes has predominantly architecture 17-19 century and filled with many modern buildings. 122 buildings Old Town are historical monuments. At the same time, Nantes retained structures of the Roman past and the early Middle Ages: remnants Roman city wall of the 3rd century AD, the chapel of Saint-Etienne behind outside the historic center, located on the site of the ancient Roman necropolis. Roman walls were rebuilt in the 13th – 15th centuries. In the area of ​​Le Bouffet, which is the medieval core of the city, You can see several half-timbered houses of the 15th and 16th centuries.

The castle of the Dukes of Breton – the majestic medieval construction in the heart of Nantes. The castle was built at the beginning of the 13th century and For three centuries it was the residence of the dukes of Brittany. At 17 century Nantes edict was signed here, which “reconciled” Catholics and Huguenots. Now the castle houses a museum history, which contains more than 800 different exhibits. 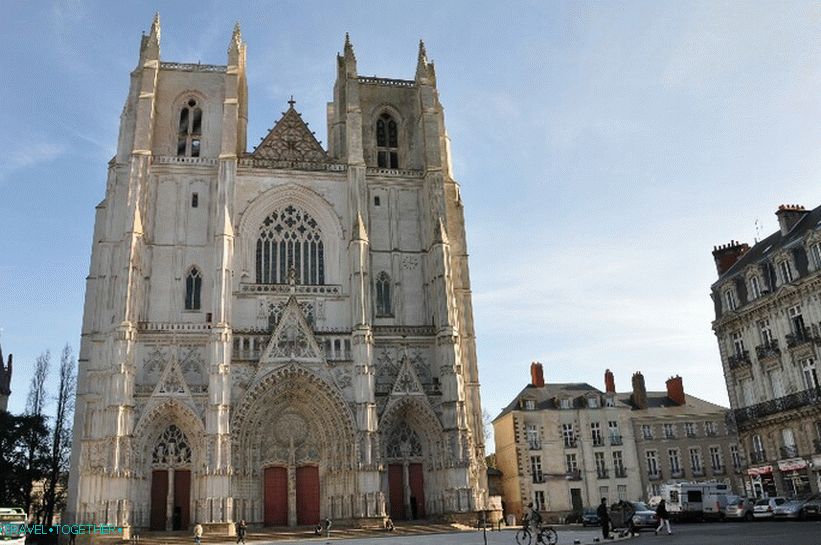 Cathedral of sv. Peter and Paul’s

Cathedral of sv. Peter and Paul – a magnificent gothic building from light stone that was built on the site of an ancient Romanesque churches. Construction of the cathedral lasted for 357 years. The church was started in 1434 and finished only in 1891. The cathedral has a beautiful facade and excellent stained glass windows. Inside are the tombs of Francis II, Duke of Brittany, and his wife Margaret, who considered one of the most beautiful in France. 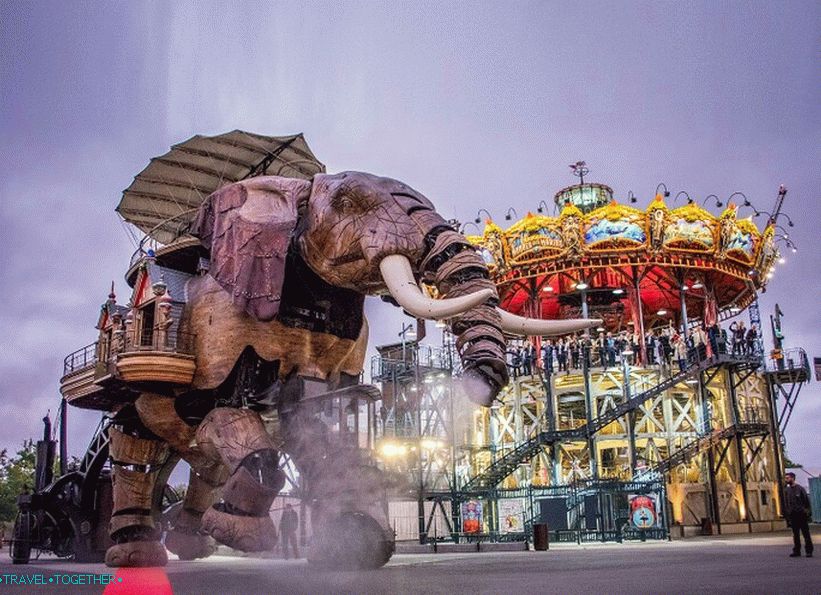 Les Machines de l’Ile (“Machines of the Isle of Nantes”) – magnificent a collection of machines and mechanisms that are inspired by the literature of Jules Verna and the inventions of Leonardo da Vinci: a huge 12-meter wooden elephant, “carousel of the sea worlds” and a strange gallery machines. 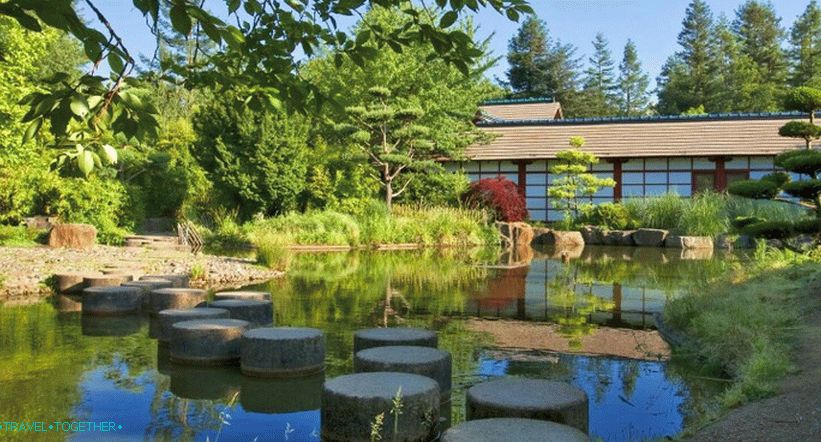 The Japanese Garden is a charming Japanese-style park in which there are waterfalls, picturesque ponds and exotic plants (bamboo, rhododendrons, camellias and cypresses). 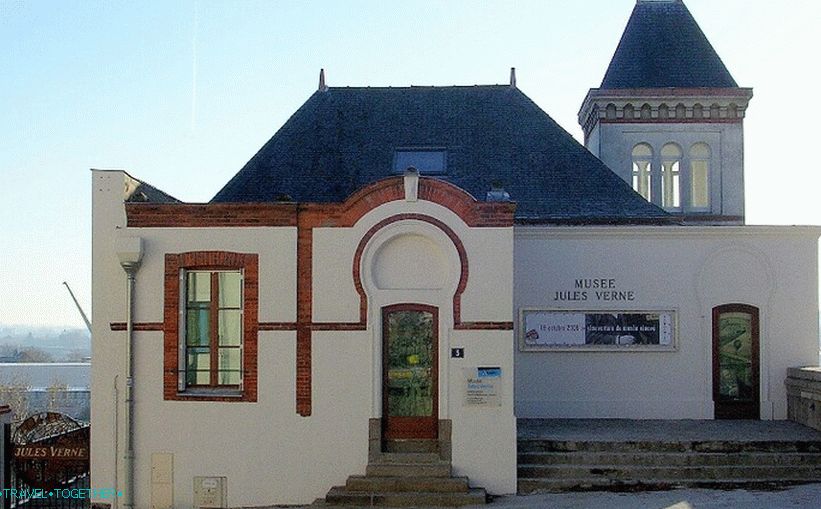 The Jules Verne Museum is dedicated to the famous native of Nantes, who is one of the founders of modern fiction. Here There are many interesting books, manuscripts, documents, illustrations and items related to the famous writer. 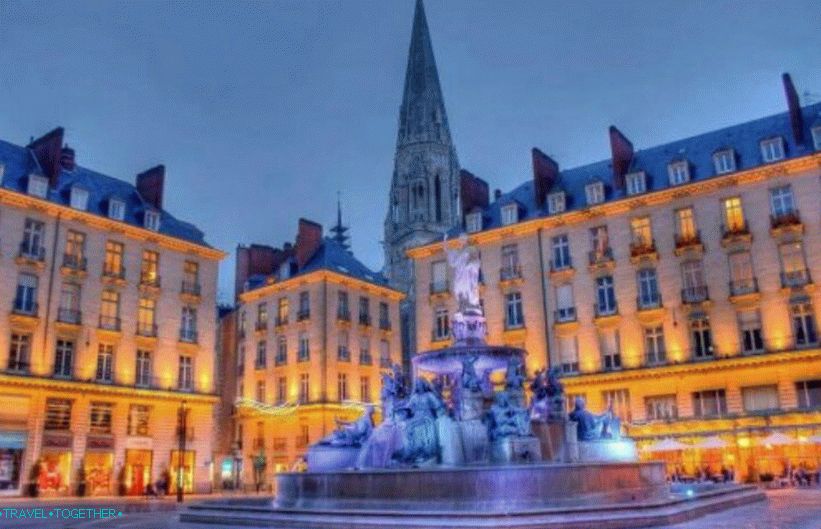 Royal Square – a grand city square built at the end of the 18th century in the heyday of Nantes. 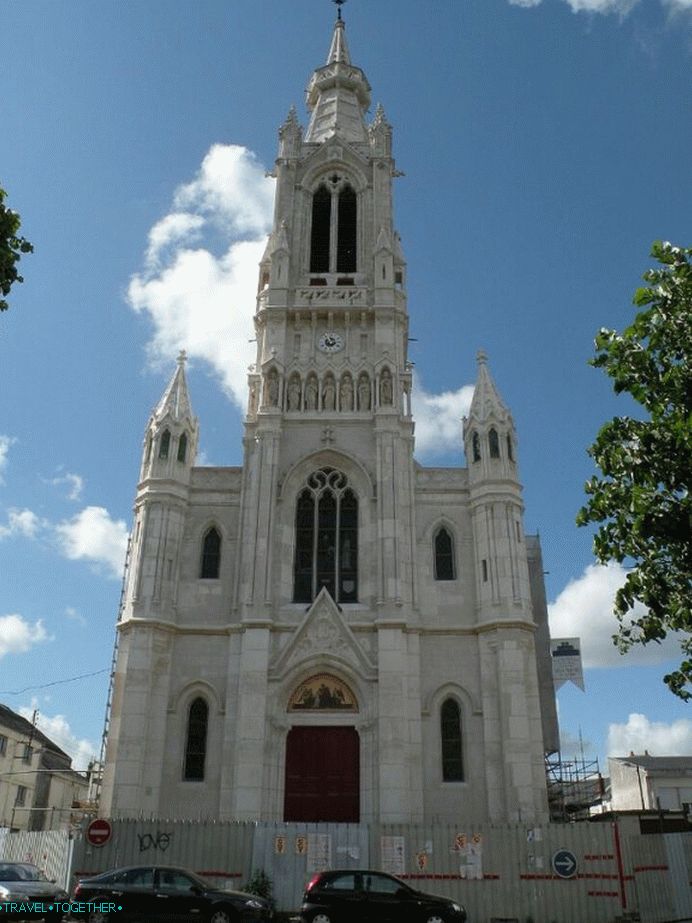 Church of sv. Anne is a neo-gothic church that dates from mid 19th century. 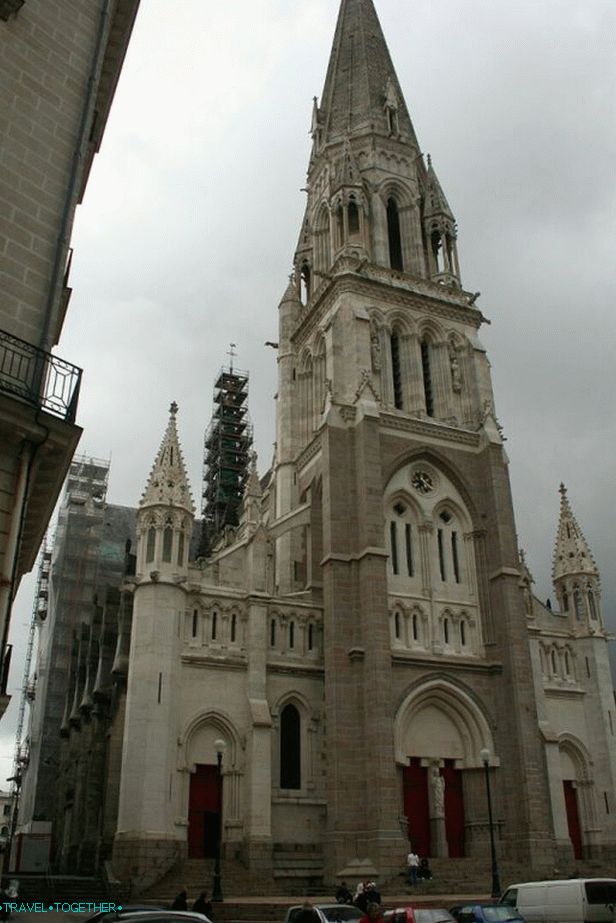 Church of sv. Nicholas is a neo-gothic basilica built in 1869 on the site of a medieval chapel. 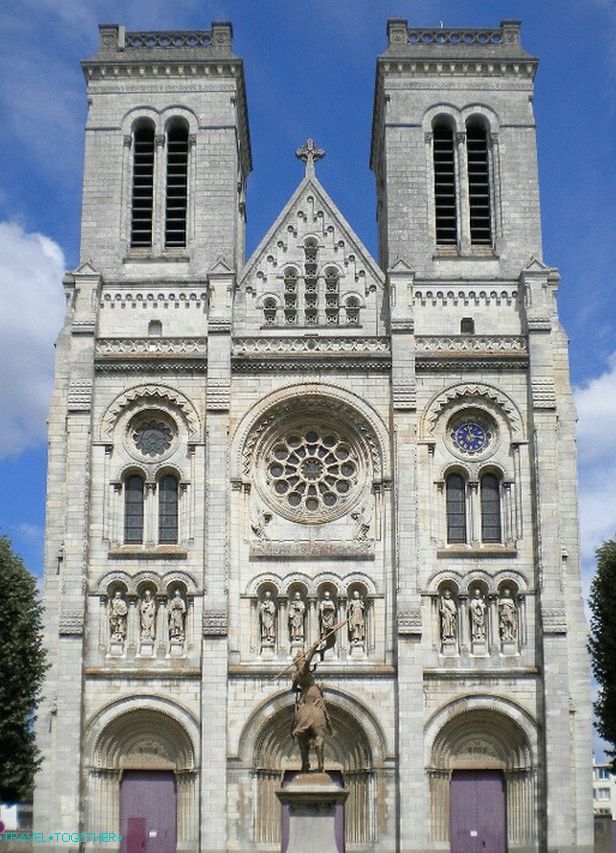 Basilica of sv. Donatiena and Rogatiena – beautiful neo-romanesque Basilica, completed at the end of the 19th century. The church stands still old gallo-roman villas. The statue in front of the building is dedicated to Joan d’Arc. 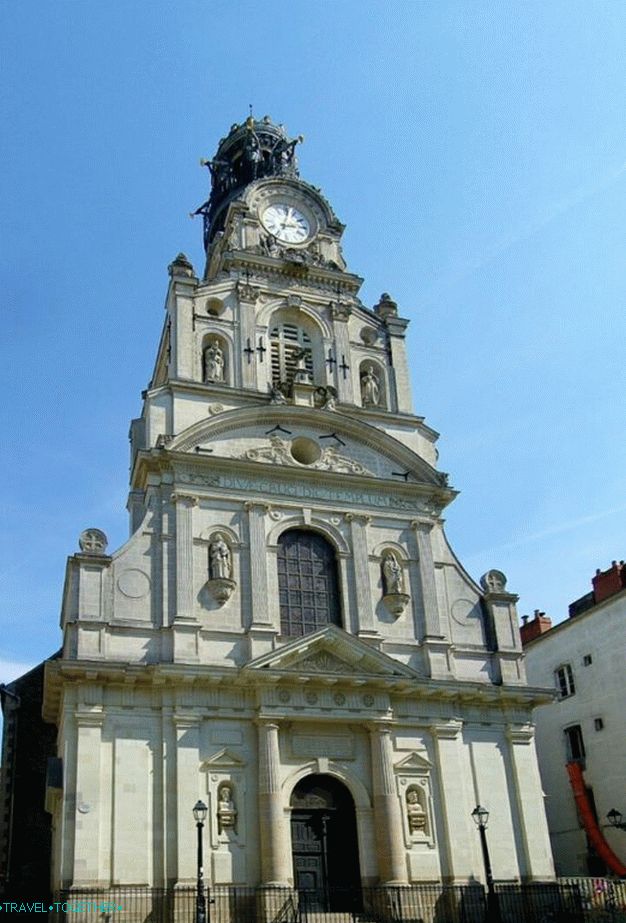 Church of sv. Croix is ​​a beautiful baroque church which It was launched in 1669 and completed at the end of the 19th century. 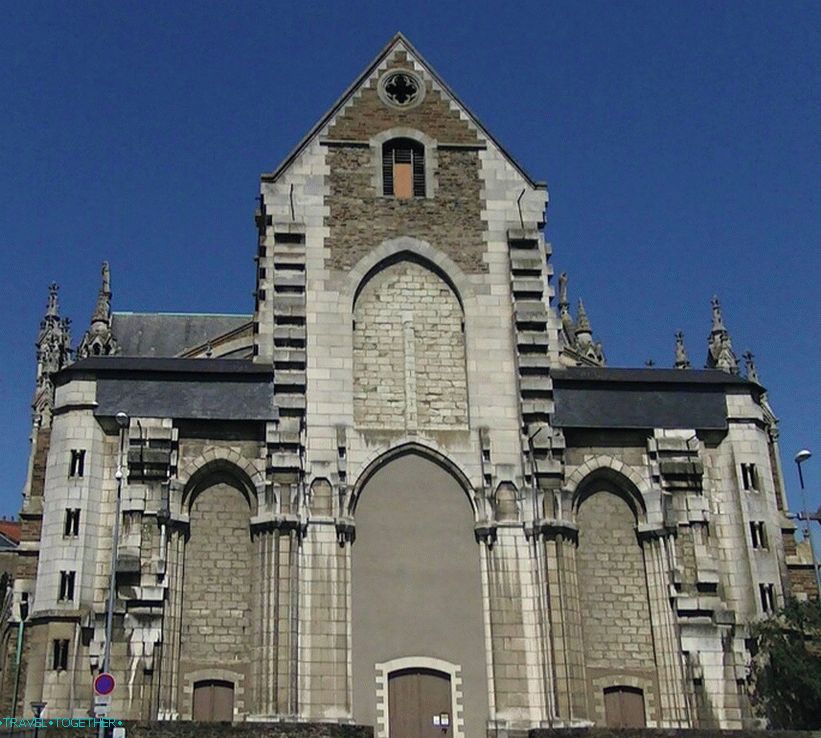 Church of sv. Similiena – Catholic Church, founded in 4 century. The current building was built in the 19th century. 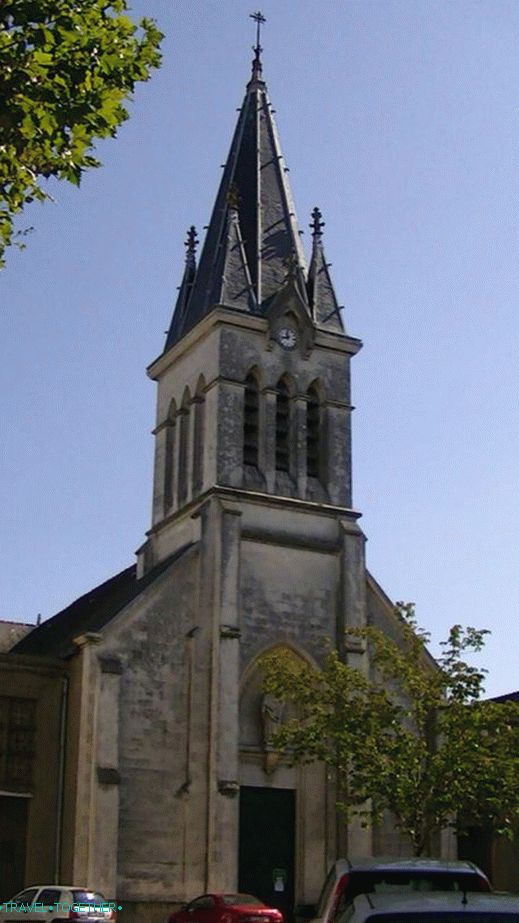 Interesting sights in the vicinity Nantes 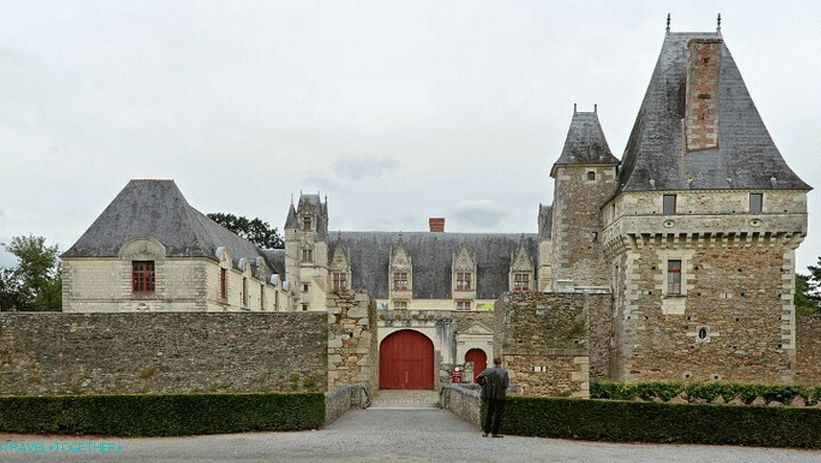 Château de Goulaine – a pretty little castle with the vineyard which is one of the oldest family wineries of Europe. 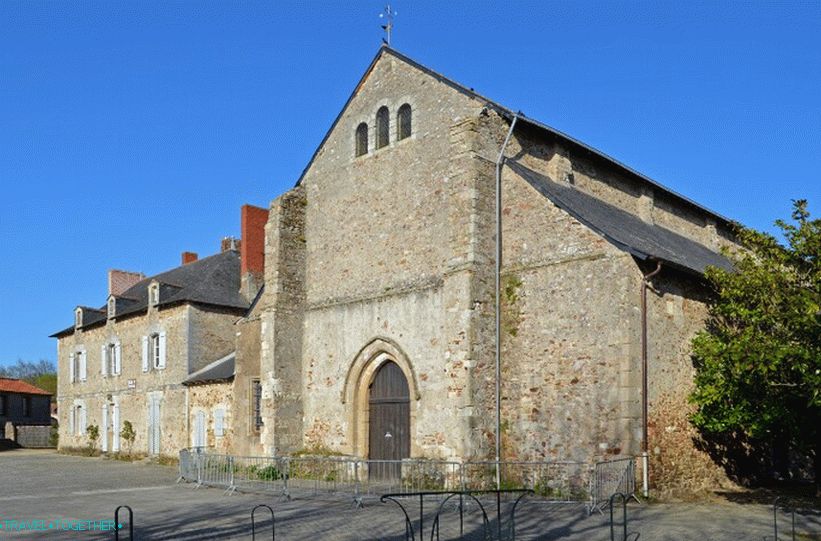 Abbey of sv. Philibert in Grandllo

Abbey of sv. Philibert in Grandliaux is an ancient monastery, founded in the 9th century by Charlemagne. Located 30 km south of Nantes

Guérande – a small medieval town that is famous salt industry and still surrounded by ancient walls.

Nantes on the map of France