Münster (Germany) – detailed information about the city, the main Muenster sights with photos and descriptions, location on map.

Münster is a city in West Germany located in the federal North Rhine – Westphalia. This is one of the most attractive. for tourists cities in Germany, combining historical atmosphere and sights, rhythm and entertainment of the modern large center. Muenster is also a city of cyclists and youth Almost a fifth of the city’s inhabitants are students, and There are almost half a million bikes here. Interesting that Munster is not spoiled by the attention of foreign tourists. Although this The many-sided ancient city has a glorious history, a beautiful architecture and is one of the centers of Westphalia.

Münster is located in the northwestern part of Germany not far from border with the Netherlands.

The climate is temperate. The average annual temperature of about 9 degrees with a plus sign. The summer is warm, the winter is mild. Interesting that münster considered a rainy and overcast city. Although the average rainfall is 700 mm. 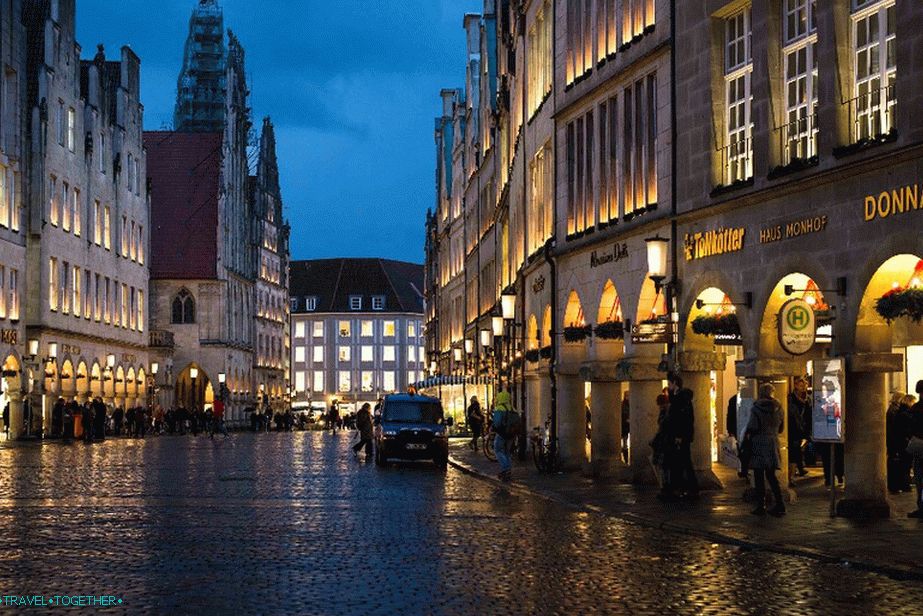 Münster is an ancient city whose history is more than 1200 years. The first settlement was founded in the early Middle Ages. Charlemagne, who ordered to build a monastery here. The name of the city, by the way, comes from the Latin word “monasterium”. The status of the city of Münster was obtained at the beginning of the 9th century.

By the 12th century, Münster became the largest city in Westphalia. Around this time, the construction of urban fortifications began. Their total length was about 4 km. In the 14th century Münster becomes a member of the Hanseatic League.

In 1648, the city hosts a landmark historical the event – the signing of the Peace of Westphalia, which marked end of the Thirty Years War. 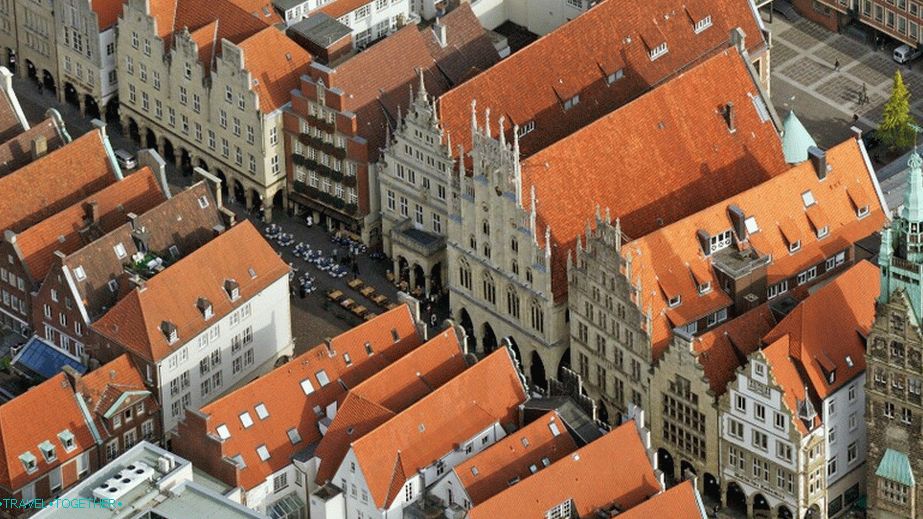 At the beginning of the 19th century, Münster briefly became part of France. Although after four years, the city again becomes part of Germany and the capital of Westphalia.

During the Second World War, the historic center of the city was strongly ruined.

Münster is a major transportation hub of Westphalia with a large station. There is no problem to get to this city by train or bus. The most regular communication with Dortmund, Cologne, Hamburg.

The main shopping street of Münster is Prinzipalmarkt. Here among beautiful arcades located many shops. Many shops located on Salzstraße. Among the malls and neighborhoods worth highlight “Münster Arkaden”, “Hansecarré” and “Stubengasse”.

Christmas market starts in November. Every third Saturday May, July, August and September on the embankment passes large flea market.

In Münster, there are several hundred catering establishments from inexpensive cafes and fast foods to good restaurants. About 80 of them offer regional cuisine.

In the quarter Kuhviertel you can find many pubs, and in the area Hafen many bars and pubs. If your goal is to find a good and inexpensive fast food, then walk around the old town in search of traditional sausages.

Münster can offer tourists interesting sights, monuments of ancient sacral and modern architecture. Although the old town was badly damaged during World War II, many historical attractions were carefully restored. One of the “chips” Munster is a large number of sculptures that established in the city after various cultural events.

All of Munster’s main attractions are located in Alshtadte The old town is surrounded by a “green belt” – pedestrian alley with greenery. 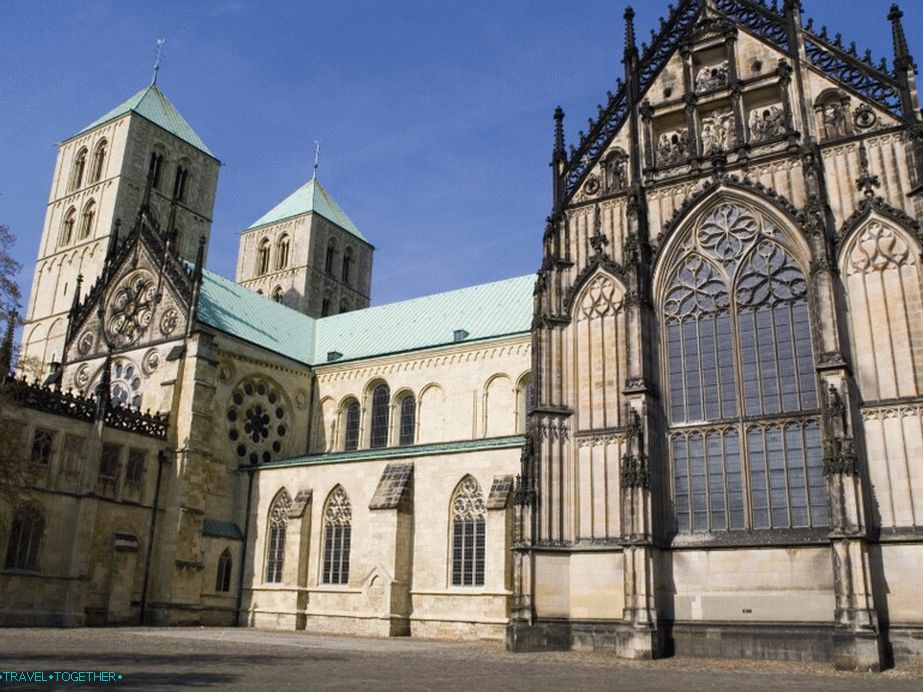 The main masterpiece of sacred architecture is the Cathedral of Sts. Paul, built in the 13th century. The facade has astronomical watches made in the late Middle Ages. Every day at noon (Sunday and holidays at 12.30) the clock shows a small show. The cathedral was badly damaged during the bombings in 1944 and restored in the 50s of the 20th century. 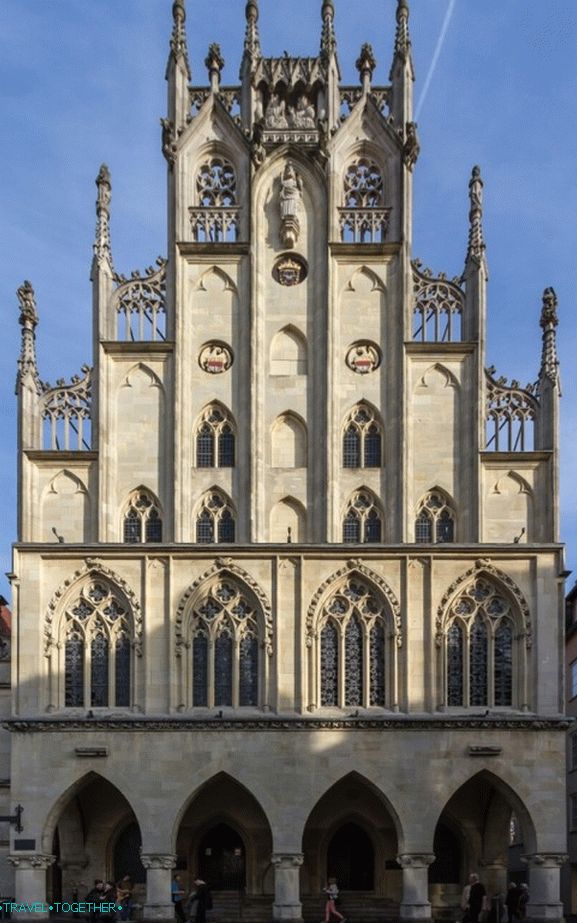 The Town Hall is a historic building of the 14th century in the old town of Münster. Here in 1648 the Peace of Westphalia was signed. 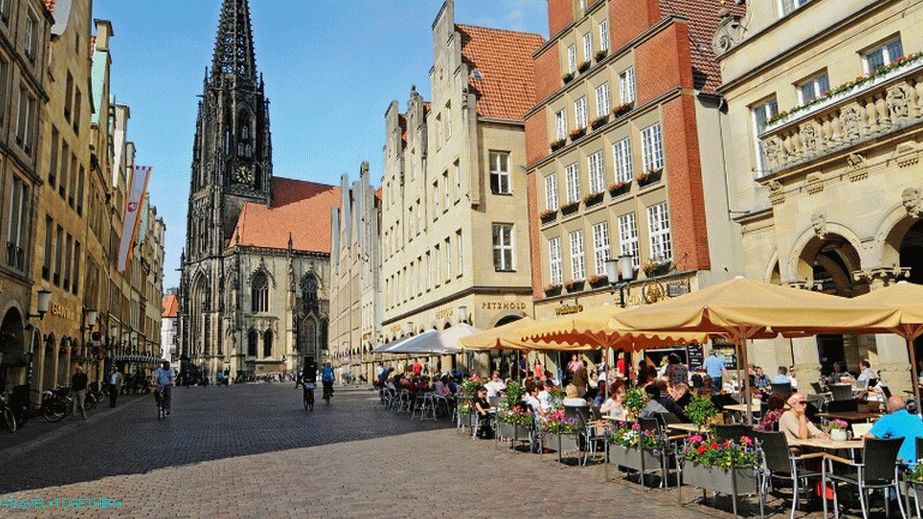 At the end of the street Principalmarkt is a beautiful Late Gothic church of the 14th century – Cathedral of Sts. Lambert On the church The tower has three ancient cells, inside of which in the 16th century the bodies of the three executed Anabaptist leaders were exposed. 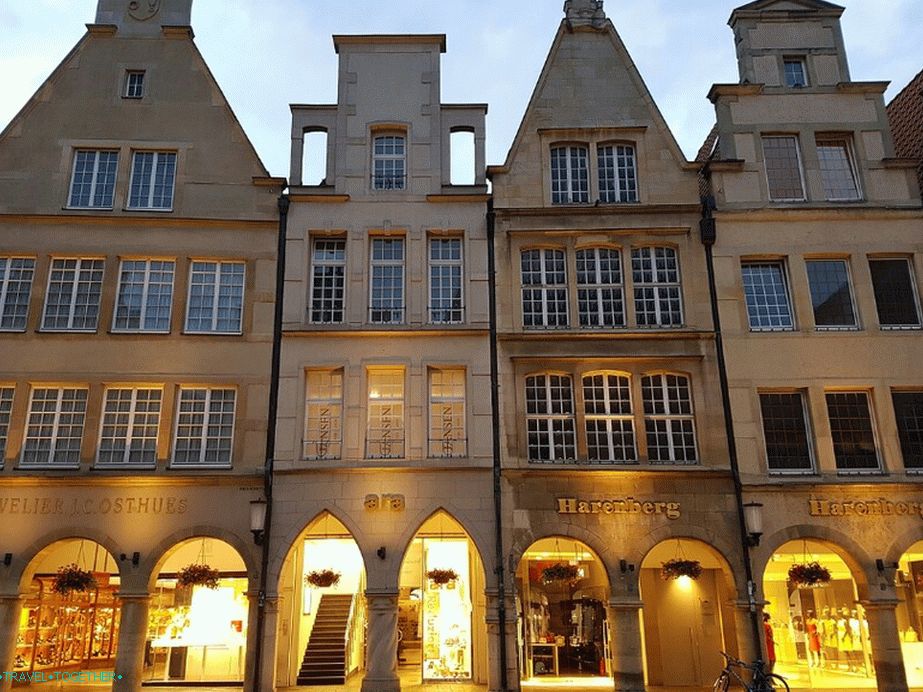 The main building of the University of Westphalia – the former palace Bishops, built in the 18th century. Now located here the university. 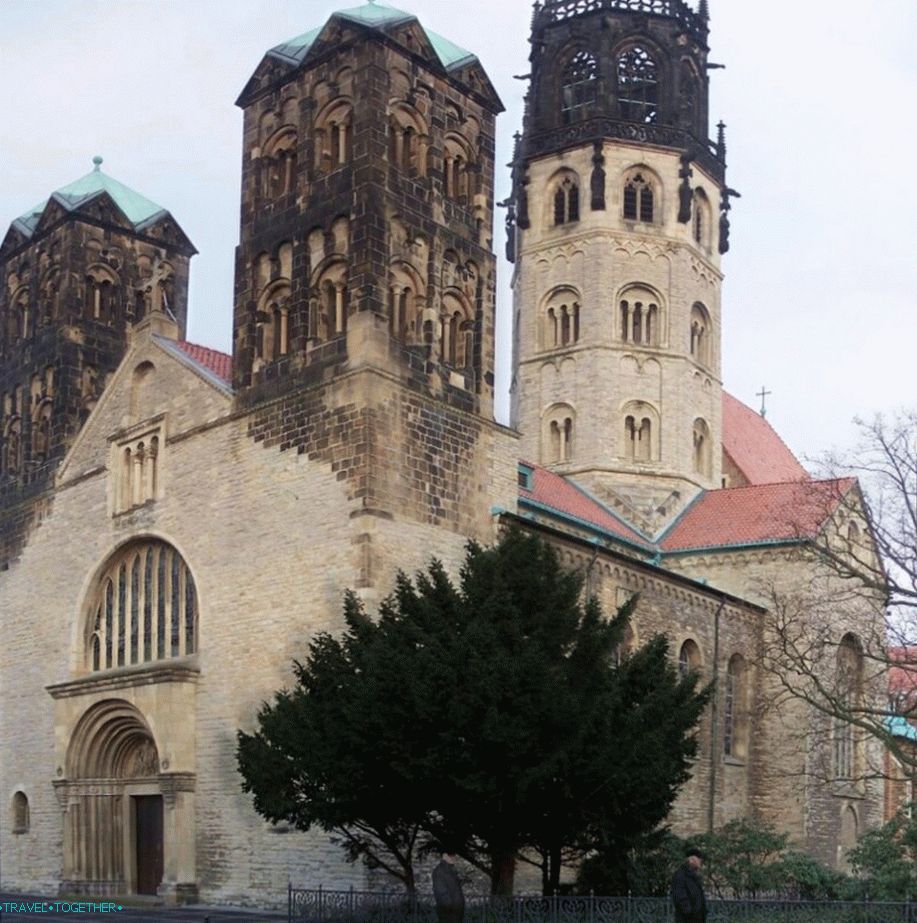 Church of sv. Ludgera – one of the oldest religious buildings Munster This gothic church, a story that goes back to 12 century. 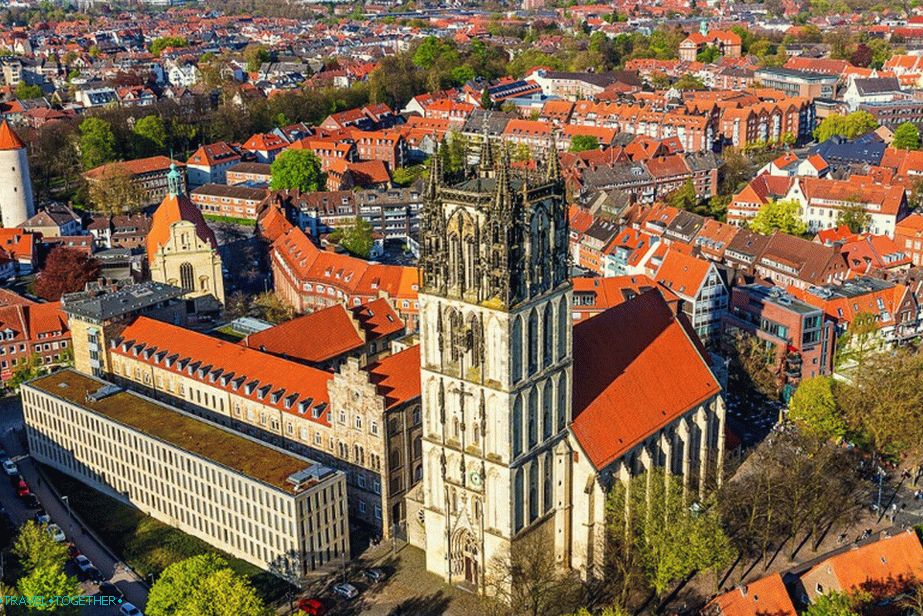 Liebfrauenkirche – 14th century gothic church in the old town Munster The church is located on the opposite side of the cathedral. St. Paul’s It is often called Überwasserkirche, which translates from German “church on the other side of the water.” 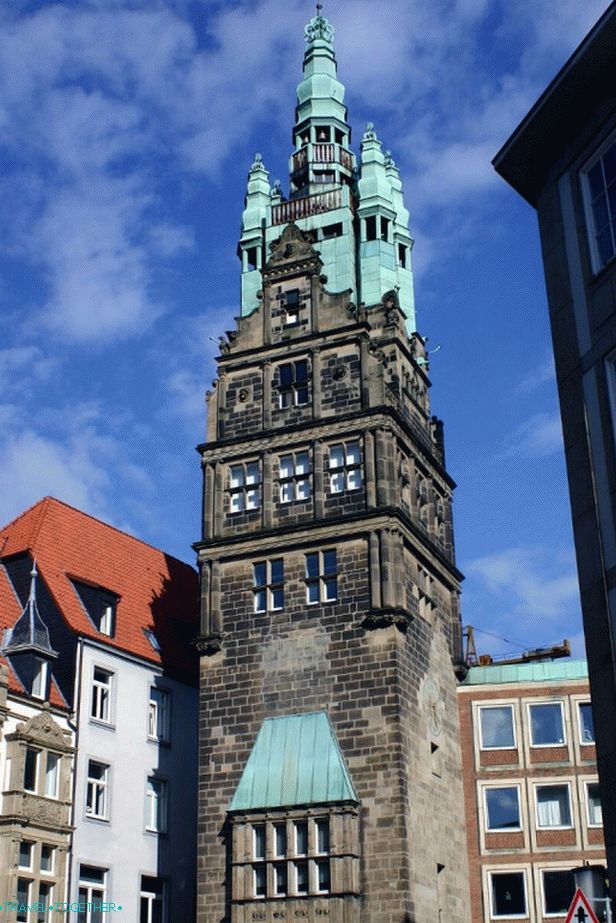 Town Hall Tower – a city tower located on the street Principalmarkt. Interestingly, the tower is relative a workshop and was built in the early 20th century. Also the town hall tower practically not hit during the bombing.

An interesting feature of Münster is about 60 sculptural compositions scattered throughout the old city. Hyde on sculptures can download below in the section “Maps and Guides”.

Munster’s location on the map of Germany