Motovun (Croatia): the most detailed information about the city Motovun, the main attractions with photos and descriptions, location on the map

Motovun is a city in the northern part of the Istrian peninsula in Croatia, located on top of a high hill. This is one of the most picturesque medieval cities and symbols of the region. Besides, Motovun is the truffle capital of Istria. Here in the nearby forest collect these expensive mushrooms, which, according to gourmets, are not inferior to French truffles. 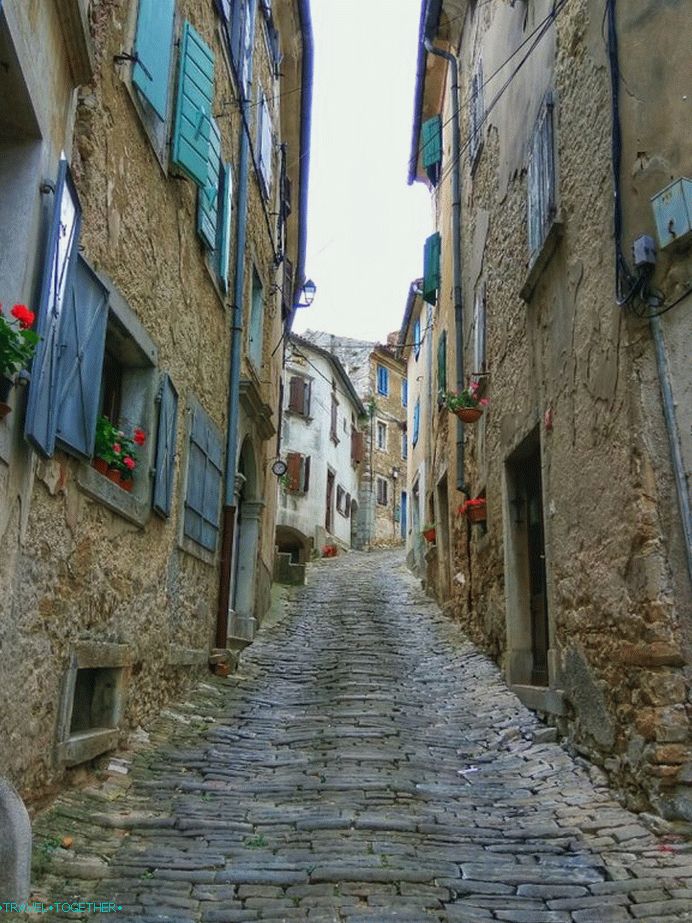 The founding of Motovun was largely due to the constant raids Barbarians in the Middle Ages (Although it is certain that there were settlement of the Celts in the pre-Roman era. And the very name of the city comes from Celtic Monton – a city on a mountain). Istrians were forced to leave the coast deep into the peninsula and build on The hills are powerful fortresses. So in the 12-13th century from a fortress on a hill grew modern Motovun. 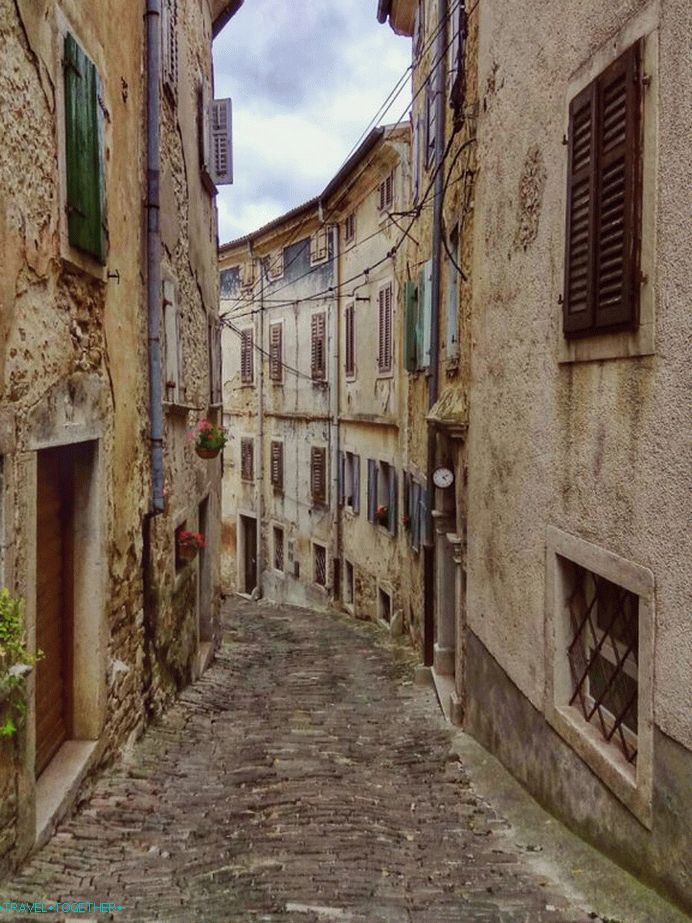 The historic center of the city is a complex of old buildings from the Middle Ages. You can only get to the Old Town on foot. The car must be left at the foot of the hill. Historical core the city was previously surrounded by walls. From the old walls there were only fragments and city gates.

The earliest preserved walls date from the 11th to 12th centuries, i.e. to time of foundation of the fortress. In the 12-13 centuries, the walls were significantly reinforced. In the 15th century a new Gothic castle was built. city ​​gate. In the 16th century, fortifications were added a monastery and a new bastion. In the 17th century, part of the walls were demolished in accordance with the provisions of the peace agreement between Austria and Venice. 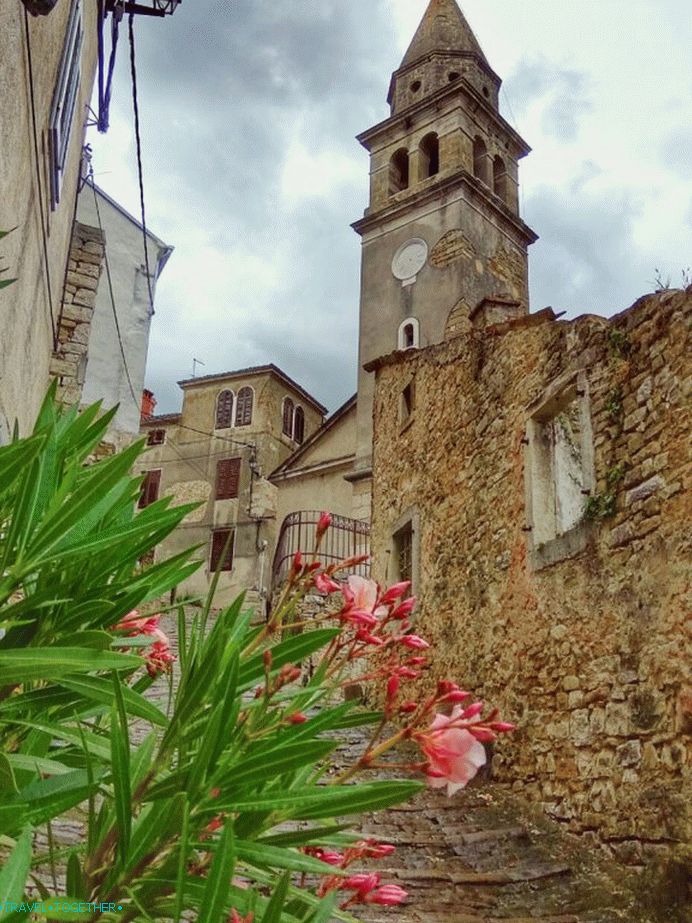 Church of sv. John the Baptist and the Blessed Virgin Mary

Church of sv. John the Baptist and the Blessed Virgin Mary was built in the early 16th century outside the city walls. At the end of 19 century to the church was completed 15-meter high bell tower. 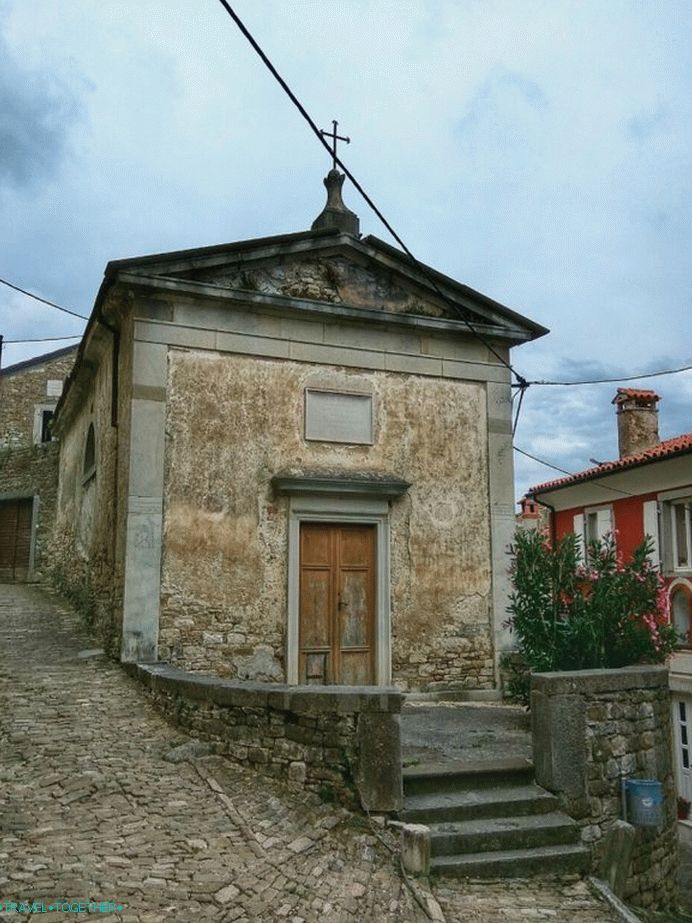 Church of sv. Anthony of Padua and of sv. Cyprian

Church of sv. Anthony of Padua and of sv. Cyprian was founded in mid 15th century. It was built next to the city walls in front city ​​gate. In the middle of the 19th century, the church was carefully restored in honor of getting rid of the plague and named after protector from the plague – of sv. Cyprian. 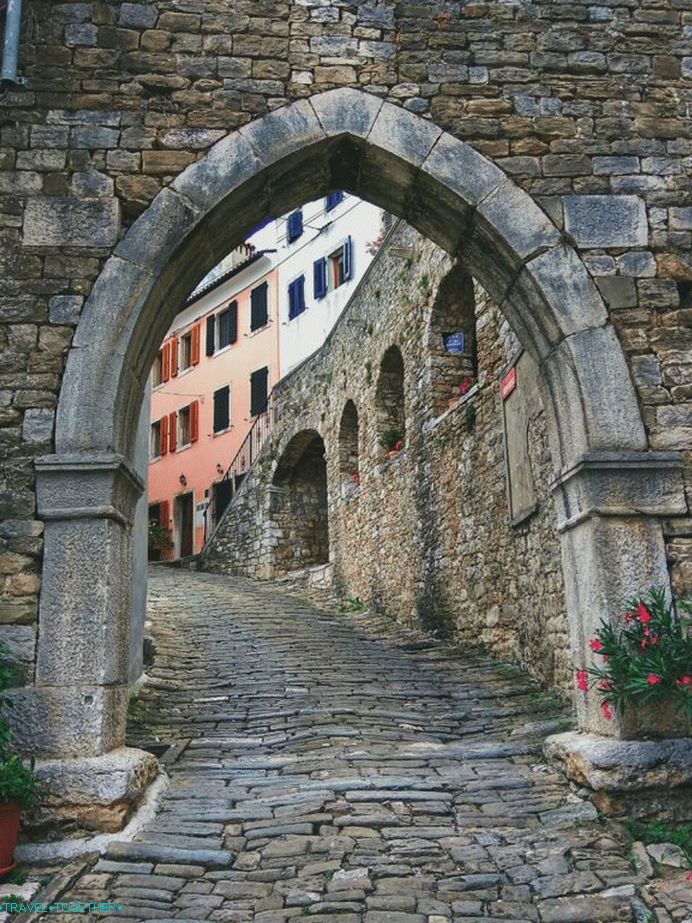 The main gate was built in the 16th century and leads into the oldest Part of city. Previously, they were protected by wooden doors and powerful the tower. 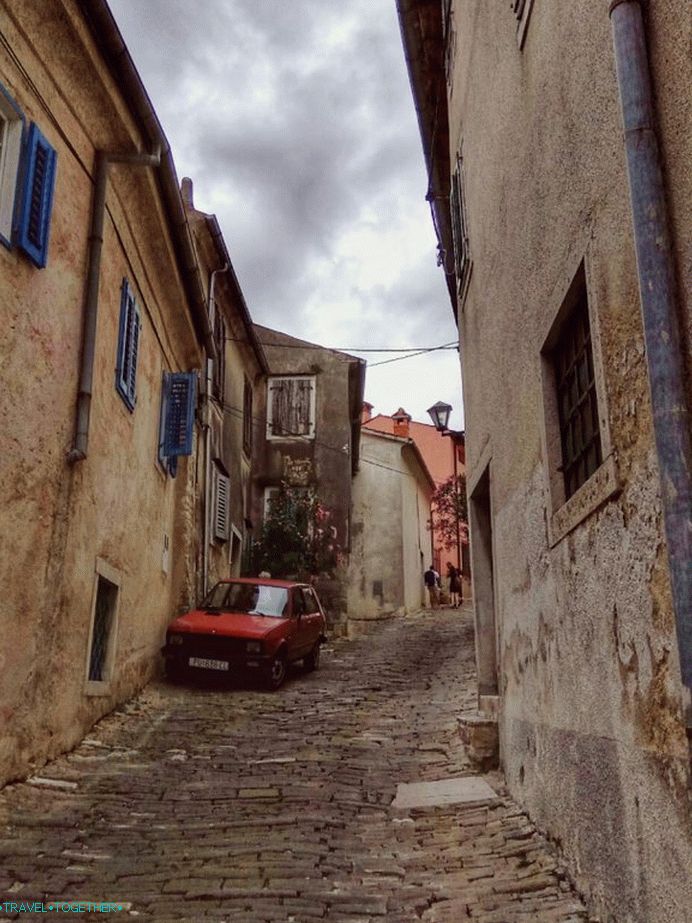 At the entrance to the historical part of the city there is an old cemetery with church of sv. Margaret.

Motovunskaya bell tower height of 27 meters, which dominates the the whole landscape of the middle part of the river Mirna, was built in 13 century, as the main tower and observation post. Was later transformed into a bell tower. 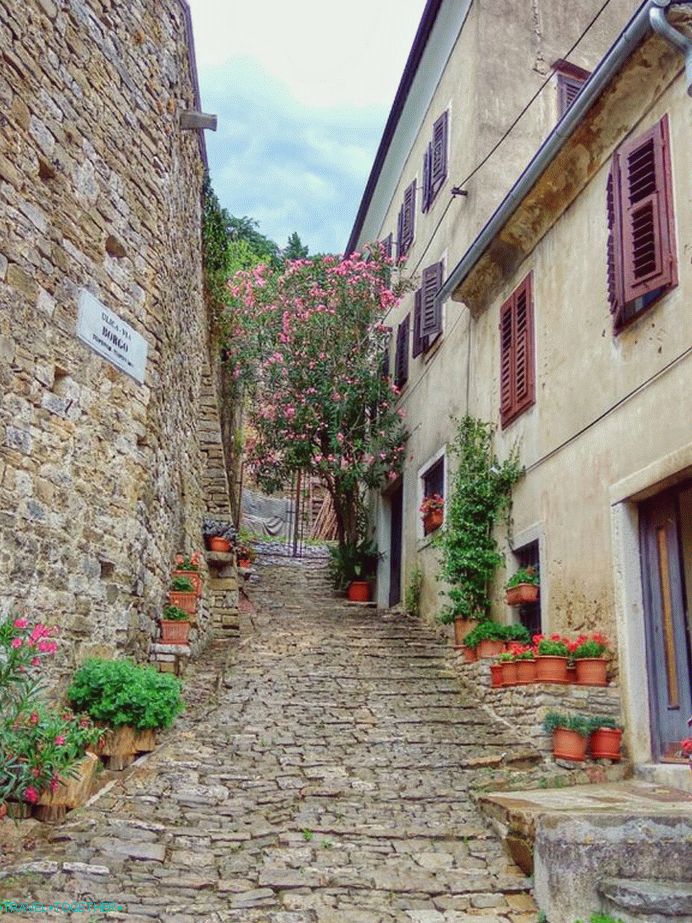 Adjacent to the bell tower is the parish church of St.. Stefan. The cathedral was erected in place of the old church on the foundation of the ancient basilica 11 century. The existing church of sv. Stefan was built in 1580. The modern look of the temple received in the 19th century.

In addition to the main gate, there are also new gates, protected tower.The tower was connected with the palace, and through it with walls fortress. Above the entrance and exit portals were built special holes through which the defenders threw at enemies heavy objects, poured hot oil and water. 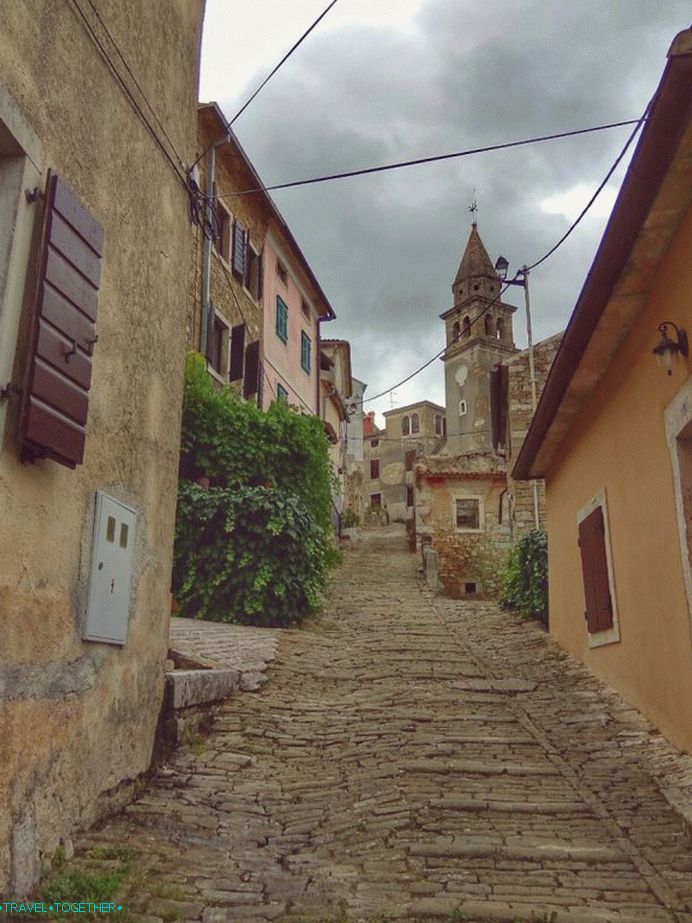 The Joseph Resseler Square was formed by an inter-worker and high wall of the second circle of the city fortifications. Today it is magnificent viewing platform and a unique terrace. 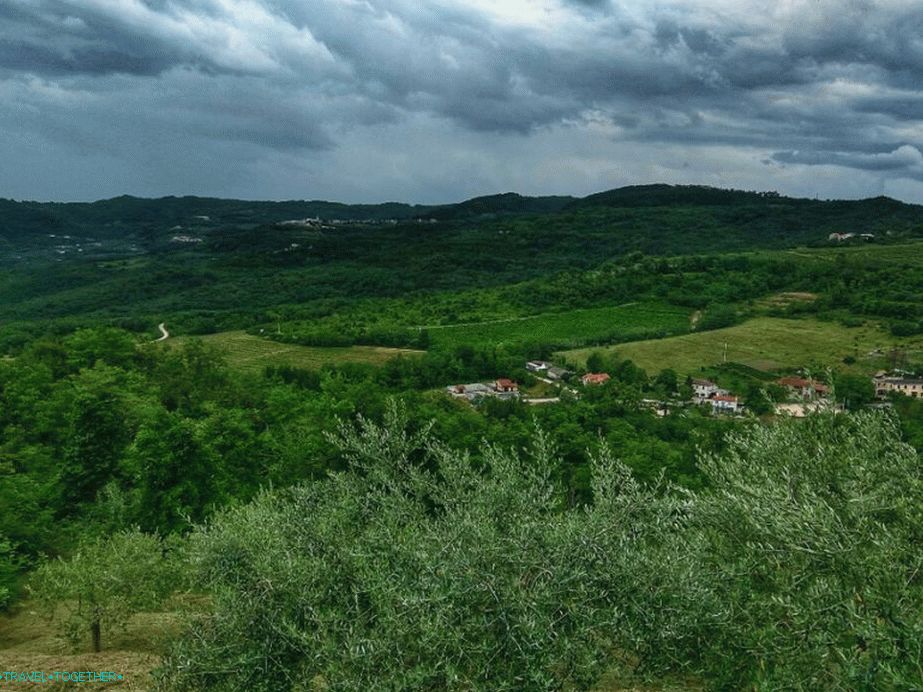 Not far from the square is the 18th century palace in which they lived. Motovunian nobles who control the neighboring lands.

Adjacent to the square is a communal palace, built in 13 century. He performed not only public functions (town hall), but also served as an important part of the defense of the city. Interest also represents the ancient loggia (lodge) of the 14th century, in which often City Council meetings were held. 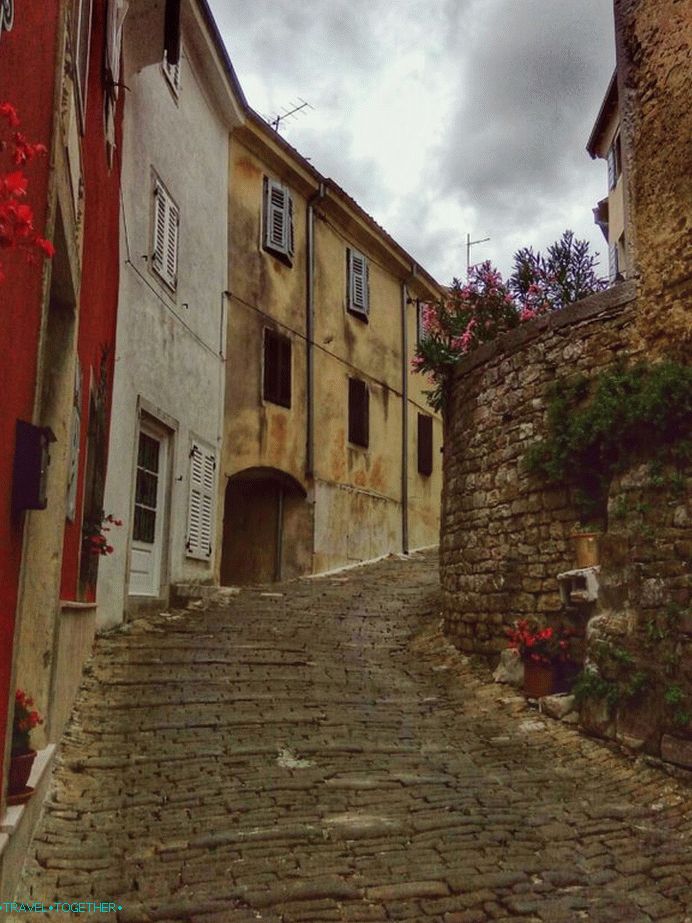 What to buy and try in Motovun?

The gastronomy of the region is a mixture of Croatian, Mediterranean, Italian and Austrian cuisine. In Motovun should try dishes with whipped and black truffles mined in Motovun Forest, Istrian Pršut, Istrian Manestra, various types of pasta, sauces and dishes from seasonal plants, goulash from game 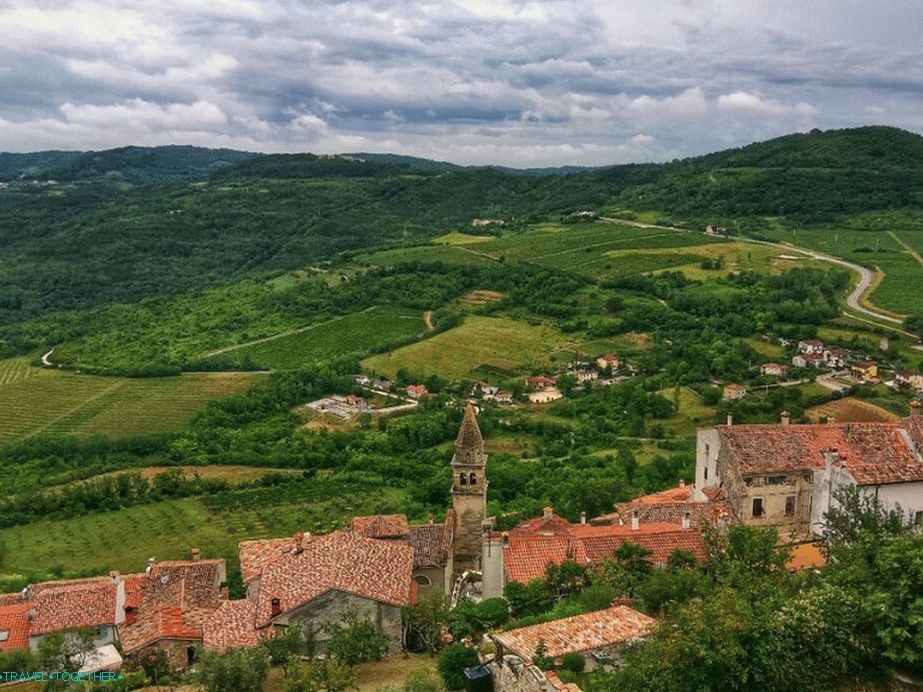 View of neighborhood of Motovun

What to buy in Motovun? I recommend to buy as souvenirs local products:

Motovun on a map of Croatia