Modena (Italy) – the most detailed information about the city with photos. The main sights of Modena with descriptions, guides and cards.

Modena is a city in northern Italy in the heart of the Emilia-Romagna region. Located along the valley of the river Po between the Sekkiya and Panaro rivers and northern Apennines. Modena is the capital of Romanesque art and the perfect point between northern and southern italy. City center is a wide arcade streets and large areas, and also beautiful palaces and gardens that have kept the seal of the Este family. Grande Square and the Tower of Girlandina are included in the list of objects. UNESCO World Heritage Site. Modena is also home to Enzo. Ferrari (the founder of the legendary car brand) and the place where they make the best balsamic vinegar.

Modena is located in the center of the province of the same name on the plains Val Padany. The city is crossed by the rivers Sekkiya and Panaro. Foothills the northern Apennines are located 15-20 km. Distances to large Italian cities: Bologna – 40 km, Florence – 130 km, Milan – 170 km, Venice – 200 km. The climate is subcontinental. Winters are pretty cool with frequent small negative temperatures. During the cold period may drop to 35 cm of snow. Summer is warm and dry.

The first mentions of Modena date back to the 2nd century BC. AT this period the Romans founded the city of Mutina on the Emilia Road. After the fall of the Roman Empire and the invasion of the barbarians, it was destroyed, until in the 8th century is not completely abandoned. The new settlement was based nearby. 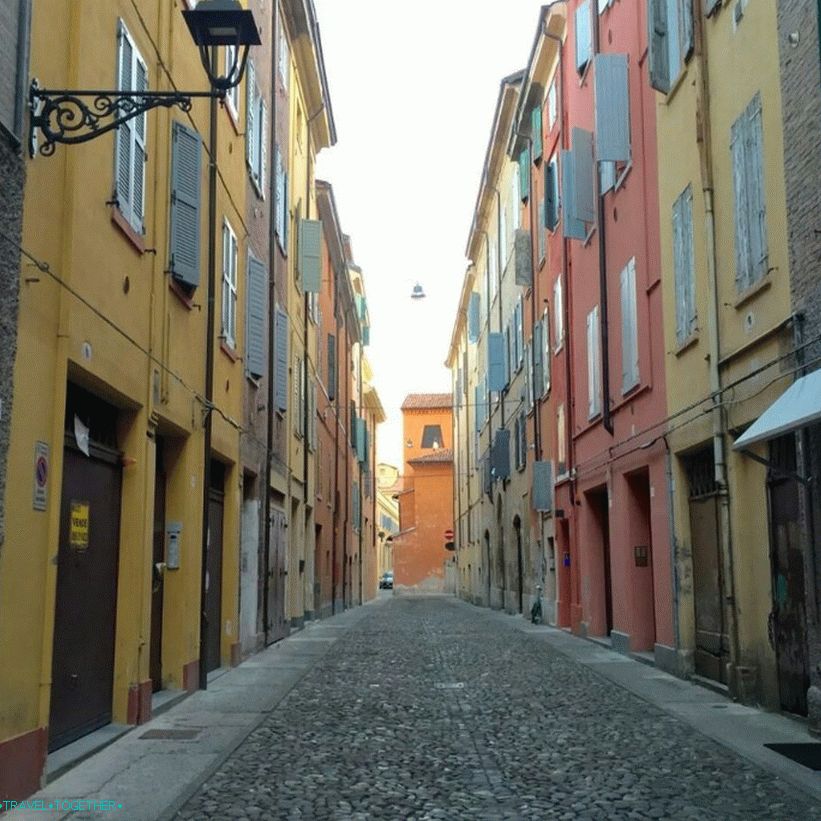 During the wars of Guelphs and Ghibellines, Modena supported the former. AT In 1288, the Este family seized power in the city. In 1452 they received the title of Duke of Modena. In 1796, the city became part of Tsizalpinsky republic. In 1859, Modena became part of united of Italy.

The nearest airport is in Bologna about 40 km away. AT the airport can be reached via the A1 motorway or by train to Bologna Modena is located at the intersection of railways: Milan – Parma – Bologna and Verona – Mantua. Train Station located in the city center within walking distance of the main attractions. Bus station located on Via Bacchini.

Modena is a wonderful cuisine with simple but exquisite dishes: ricotta tortellini, fried dumplings, tigella (tortilla with cheese and ham), tortellino (dough with minced meat and Parmesan cheese in beef broth), tagliatelle with spinach, lasagna, risotto with balsamic vinegar, pasta with minced meat. All this accompanied by a glass of beautiful lambrusco. 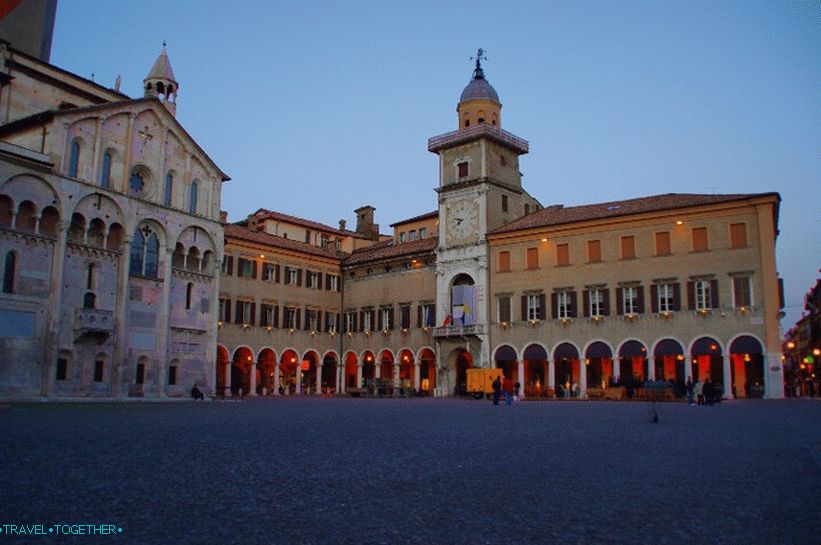 Piazza Grande or the Great Square is the heart of Modena. This area cobblestone, together in the tower of Girlandina included in the list UNESCO World Heritage sites. The Duomo is an impressive Romanesque cathedral whose construction lasted from the end of the 11th to the 13th century. Located near the ancient Roman Emilieva road on the site of the early Christian church, where there used to be a tomb of sv. Geminiano. White marble facade the cathedral was designed by architect Lanfranco, and beautiful Sculptures are the work of Wiligelmo. Duomo of Modena is rightfully one of the best masterpieces of the Romanesque style in Europe. Great The rose window dates from the 13th century and highlights the beautiful facade churches. Marble lions and reliefs at the entrance are among the most Early Romanesque Sculptures in Italy. In the interior you can admire sculptures of master krions belonging to the 12th and 13th centuries, in chorus The 15th century and the crypt, which is supported by 30 thin columns and adorn the work of Guido Mazzoni. Ghirlandina is one of the most impressive Italian campaigns. This is a high 88-meter tower on the north side of the Duomo. Initially the tower was built for defensive purposes and decorated bas-reliefs. Top levels were added in the 13-14 century. On the tower can be climbed and admire the panorama of Modena. 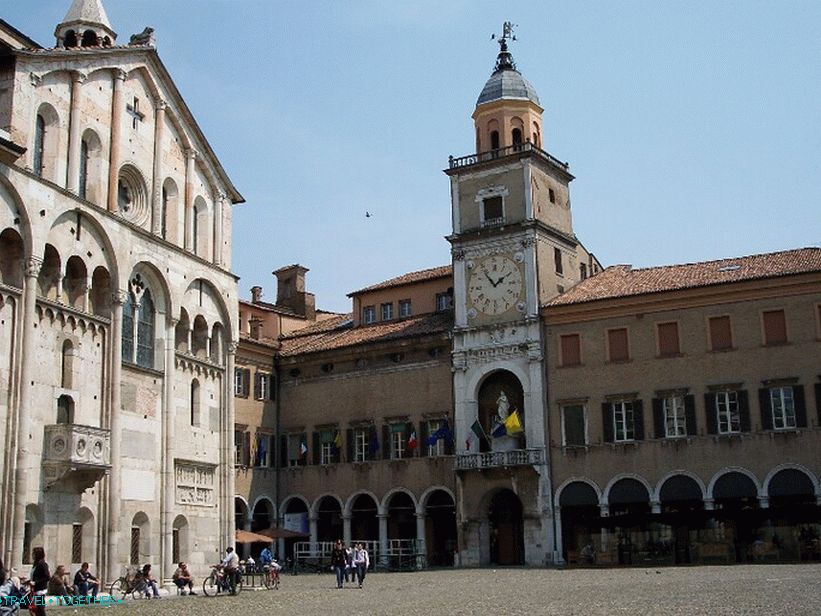 The Town Hall or Palazzo Comunale is a historic building that occupies the northern and eastern part of piazza grande. Is an the result of the restructuring of six medieval buildings. Contains beautiful rooms. Note the rectangular stone construction – Predu. She probably originally belonged ancient roman building. In the Middle Ages it was used as a scene. for speakers. 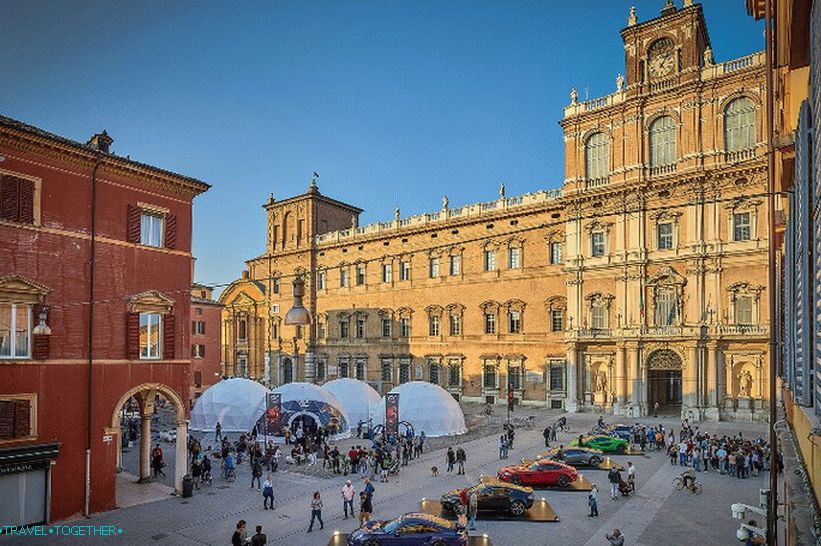 Doge’s Palace – one of the best baroque palaces in Italy built in the 17th century. The elegant facade is decorated with statues and balustrades. Now within its walls is a military academy, historical museum which contains weapons and military exhibits. The Palace of Museums is a historic building, within whose walls several large museums are located at once, where the best collections of Roman lapidary finds, including sarcophagi, musical instruments, leather, glass, paintings, sculptures. Pictures and sculptures in the Estense gallery include works by Velázquez, El Greco, Correggio, Bassano, Tintoretto and Bernini, as well as the Flemish and German artists. 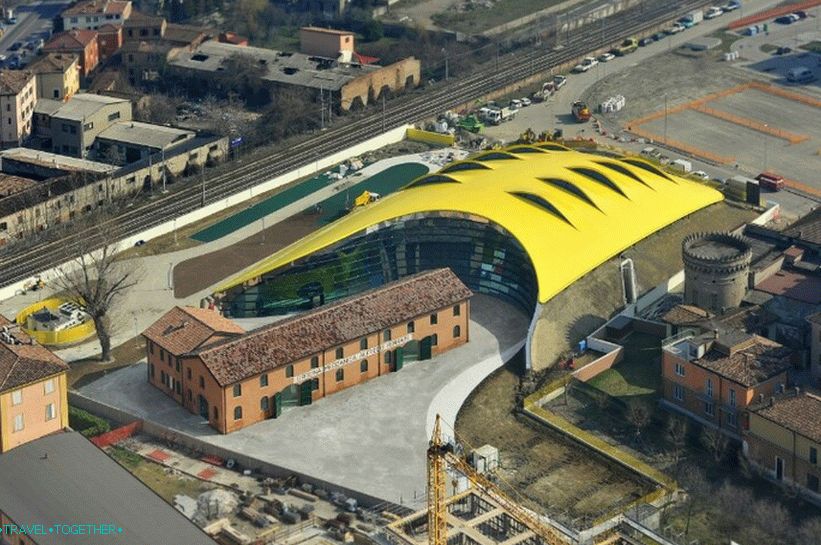 Ferrari Museum – the house where Enzo Ferrari was born, and the adjacent modern exhibition hall, talk about his life and work through multimedia exhibits, an art gallery and an extensive collection of legendary cars. 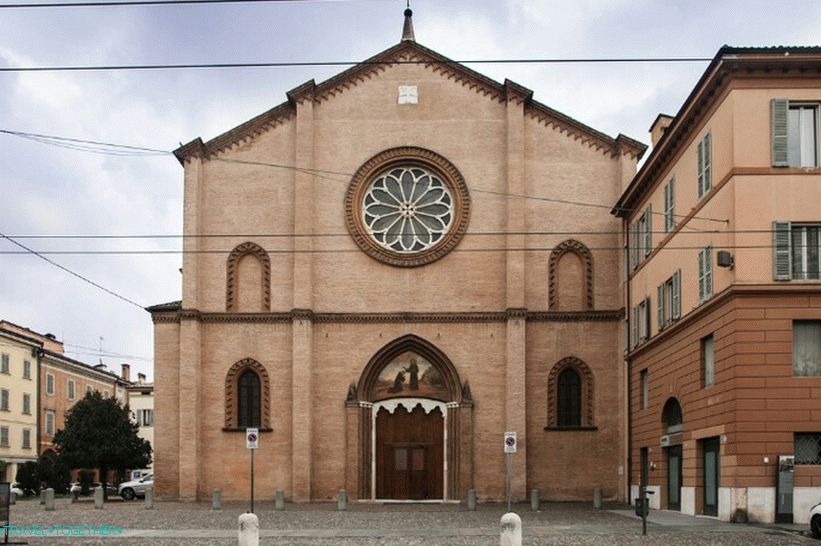 Church of San Francesco – was started by Franciscan friars in 1244 and was built over more than two centuries. In the 16th century the church and the adjacent monastery were rebuilt. Highlight The interior decoration is a group of 13 terracotta statues, created around 1523 by Begarelli. San Bartolomeo Church – Former Jesuit Church, the construction of which was begun in the early 17th century. 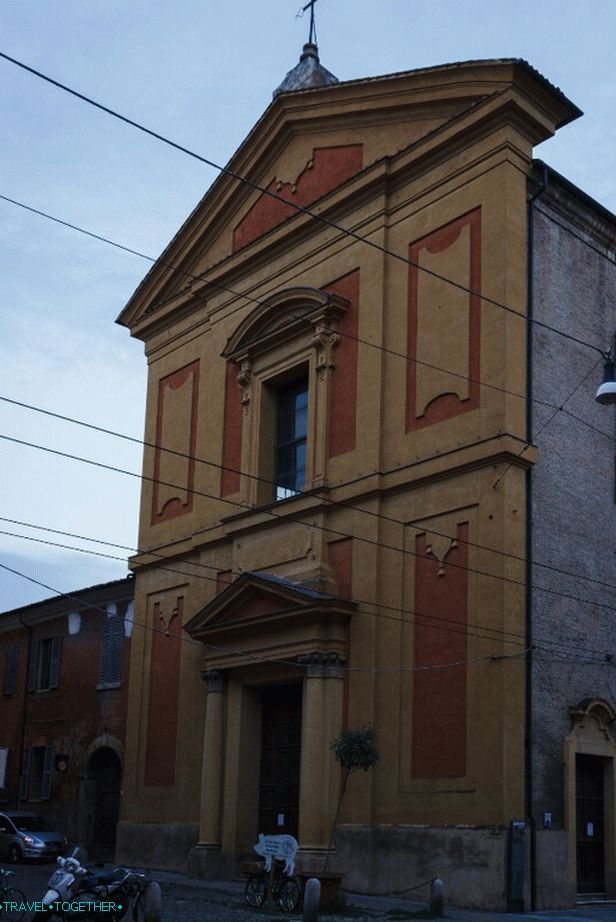 San Biagio – 14th century church, originally dedicated to Holy Mother of God Carmine. The building has kept the original structure by the project of Cristoforo Malagola. Old church San Biagio, located on the Emilia Road in the area where today is located the Palazzo Montekuccoli, was destroyed in 1768. After this parish has moved here. The church contains 18th century frescoes. Agostino Miteli and Angelo Columns. Church of sv. Peter was attached to the ancient Benedictine the abbey of the 10th century and reconstructed between 1476 and 1518. The interior, divided into five naves, is rich in works. art made between 1400 and 1500 and in fact is an exhibition of local artists of the time. Six large terracotta statues leaning against the columns of the central nave, Begarelli was fashioned. Of particular importance is the ninth chapel, in which found Apogee Begarelli – the last work of the master, depicting Madonna. The sacristy is decorated by Gianfrancesco da Cremona in 1548

Modena on the map of Italy