Maribor, Slovenia: the most detailed information about the city of Maribor, main attractions with photo and description, location on map.

Maribor is a city in Slovenia located in northeastern part of the country on the banks of the river Drava. it administrative center of the Podravska region and the historical region Lower Styria. Maribor – the second most important city Slovenia, after the capital Ljubljany. But despite this, he has old provincial charm. Here you will not find amazing attractions and not see many beautiful places, but Maribor can offer the charm of old streets, cozy cafes and noisy student life.

The city is located at the foot of Mount Piedmont in a hilly area surrounded by picturesque vineyards and forests. Maribor – This is a city of rich wine culture, excellent cuisine, which different abundance of green areas. Thanks to its compact size Attractions are located within walking distance. This city as if created for unhurried walks.

The history of Maribor begins around the 12th century. At that time The town was first mentioned as a small market near the old castle. In 1254 Maribor received urban privileges. The city has become to grow rapidly after the victory of Rudolph from the Habsburg dynasty over King of the Czech Republic Otakar ll.

From the 13th century until the First World War, the city was ruled by Habsburg and was called Marburg. During the Austrian domination Maribor survived several Turkish attacks. Until the 19th century, it remained a small provincial town. After World War I, Slovenia became part of Yugoslavia. In during World War II, Slovenia was occupied by the Germans. After the war, the city became part of Yugoslavia again, until in 1991 Slovenia has not declared its independence. Currently Maribor is a major industrial, economic and cultural center country. It is also the largest educational center in Slovenia.

Maribor is located in a temperate continental climate zone. In winter the temperature is usually around zero. Small frost, snowfall. Summer is usually warm with an average temperature of about 20 degrees. Sometimes in summer hot weather can reign. The warmest The months are July and August. The greatest amount of precipitation falls in summer months. The coldest month is January. Pretty warm here spring and autumn. Maribor is also one of the sunniest cities. Slovenia.

Maribor has an international airport whose flights connect the city with major European cities. Others coming airports are located in Ljubljana, Graz (Austria) and Zagreb (Croatia). The closest airport is Graz. Graz and Maribor binds a stable rail connection. Trains run 6 times per day. Travel time is 1.5 hours. Buses connect the city with other cities in Slovenia, as well as Belgrade, Sarajevo. Railway station and bus station located in the eastern part of the historic center.

Maribor is easily accessible by car not only from Ljubljana, but and from Austria, Budapest, Zagreb. In order to use highways and highways in Slovenia, vignette required. You can buy a vignette at the border, at gas stations, in some kiosks, etc. Monthly vignette costs € 30, weekly – € 15. Near Maribor is located one of the largest shopping centers. Europe – Europark. Many shops are located in the Old Center and on ul.Vetrinjska.

What to bring from Maribor? First of all, these are local products. – wine and pumpkin oil.

The main attractions of Maribor are located in historical city center. Among the most interesting monuments history and culture should be noted remnants of the old city walls, ancient towers: the Tower of Justice, Water and Jewish towers, cathedral, synagogue, castle ruins, town hall and plague pillar. In the old town many ancient building. Ribbon is the oldest and most magical part of Maribor, located on the left bank of the Drava from the old vine to the tower of Justice and Market Square. If you go to the right bank of the river you can admire the wonderful panorama of the Old Year. 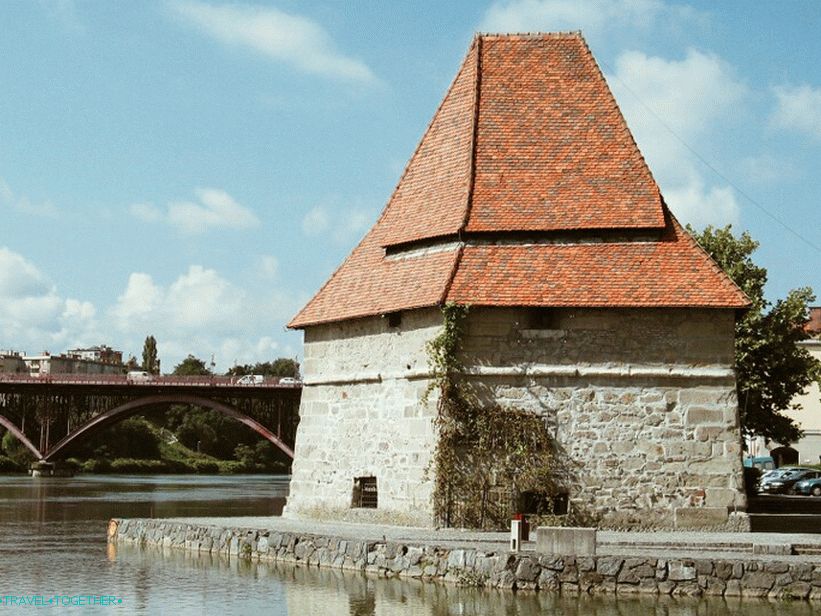 One of of old defense towers – Water Pressure

In the oldest part of the city, you can look at fragments of old city ​​walls. Also in Maribor, there are three old defense towers – Justice, Water and Jewish. Old Vine and House at the Old Vine

One of the main attractions of Maribor is old vine located in the middle of the old cities. It is the oldest vine in the world, which is inscribed in Guinness Book of Records and personifies the rich history of winemaking in Styria. It was planted 450 years ago and experienced several Turkish invasions. Interestingly, the vine still bears fruit. House, near which it is called the House at the Old Vine. Here You can feel the wine culture of the region, buy souvenirs and taste the wines. The main (market) square is the heart of the Old Town, the most important and a large area of ​​Maribor. Near the square is old bridge over the Drava. On the square itself you can see the Town Hall 16 century, the baroque plague pillar of the 17th century, the old brewery and others historical Buildings. Also here you can have a good time in cozy cafes. Mariborg Castle is a baroque mansion in the historic center, in which now houses the regional museum. From the old castle to Maribor left only fragments. The old synagogue is one of the main attractions. historical center, an important monument of Jewish culture. Origins This structure dates back to the 14th century. This is one of the oldest Jewish religious buildings in Europe. The Cathedral or the Capital is a Catholic church in Maribor, dedicated to John the Baptist. Also known as a burial site. the first Slovene saint. Already in the 13th century, this place was built an old Romanesque temple. The cathedral in the 14-15th century was rebuilt in Gothic style, and later added baroque features. 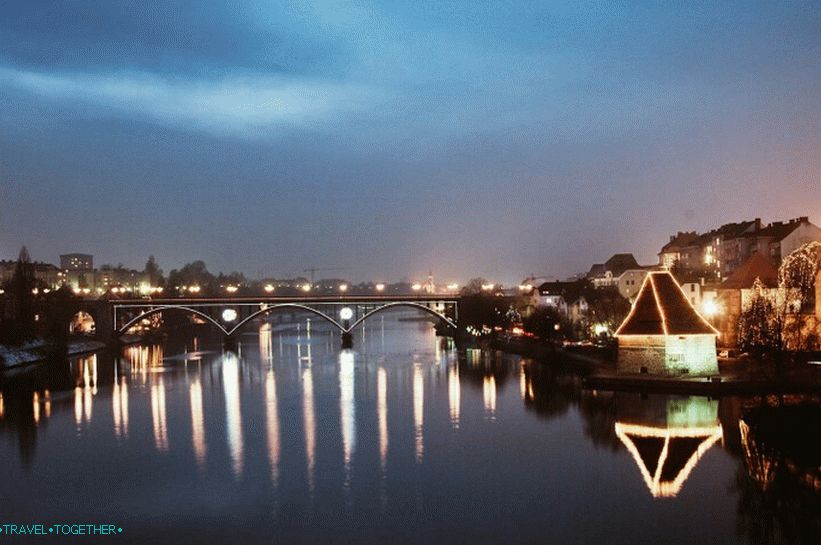 Tired of the city, you can visit the city park. This picturesque green massif is located near the old town near the shore Drava. Here, besides greenery, there are three ponds and aquarium terrarium.

Maribor on the map of Slovenia