Marbella (Spain) – the most detailed information about the city with photos. Marbella’s main attractions with a description, guides and cards.

Marbella is a city in the south of Spain in the autonomy of Andalusia. Once upon a time the small village of fishermen is now considered the resort capital the province of Malaga and the entire Costa del Sol. Marbella is Cozy and trendy city offering the highest-class vacation: chic clubs, restaurants and golf courses, beautiful beaches and numerous shops. In addition, the historic center has typical Andalusian charm: whitewashed houses with metal balconies and flowers, cobbled streets with orange trees.

Marbella occupies a narrow stretch of the Mediterranean coast Southern Spain with a length of about 40 km. Terrain formed by the foothills of the Sierra Blanca. North Marbella protect mountains Cordillera Penibetika. The climate is Mediterranean subtropical. Summer is hot and dry, winter is mild. The average annual temperature is about 18 degrees. 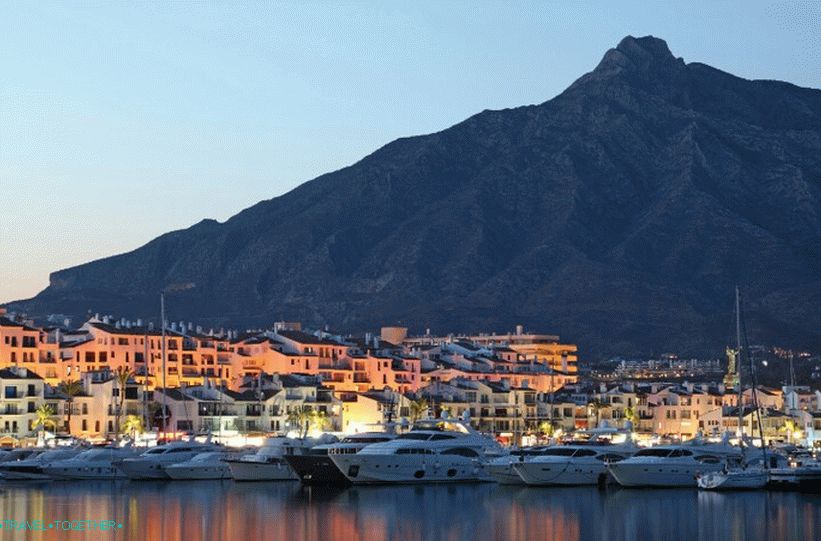 Marbella is one of the best destinations for a beach holiday in Spain The province offers almost 30 km of sandy beaches, many of which are marked with a blue flag. Fontanilla Beach is located in walking distance to the historic center. He has about 1 km in length and a beautiful promenade with restaurants and shopping. Other popular beaches are Real de Zaragoza and de Alicante. Beaches Guadalmina, Linda Vista and San Pedro Alcántara are located nearby. from Puerto Banus. They stretched for several kilometers, marked blue flag and great for family holidays. Lot excellent beaches can be found in the coastal cities of the province. Most the best of them are marked on the map below.

The best time to visit Marbella is April-June and September October. If you are not afraid of the heat, then July and August are also would be a good option. Some researchers associate the Marbella base with Phoenicians. But it is precisely proved that here in the period of Antiquity there was an ancient Roman settlement. In the Middle Ages, after the raids Normans, Muslims built a small castle and several towers for protection. The old town was surrounded by gardens that were most of the mulberry and figs.

In 1485, Marbella without bloodshed goes under the authority Castilian kingdom. From 1644 they start growing here. sugar cane. At the beginning of the 19th century, one of the first was built here. Spanish blast furnaces. Heavy industry produced more half cast iron country. By the middle of the 20th century, Marbella becomes one of the most popular resorts in Spain. The nearest airport is in Malaga. He is served most European carriers. Alternative option – Gibraltar airport, but it is located about two hours away. From Malaga Airport to Marbella can be reached by bus, which sent every hour. Travel time is about 40 minutes. Recommend sit on the left side of the bus on the way to Marbella to enjoy a great view of the coast. Or on the right, if you move to opposite direction. The central bus station is right at the exit of the A-7 motorway. Regular runs along the coast buses. Evening on the streets of the historic center

In Marbella you can find a huge number of cafes and restaurants as from traditional as well as eastern, european and even Latin American cuisine. Be sure to try the dishes from fish and seafood, local gazpacho, paella, tapas and much another. The province is also famous for its dessert. wines.

The city is known for its luxurious nightlife. Most exclusive and stylish locations are located in Puerto Banus and on the Golden Mile

The old town is located at the foot of the hills and foothills Sierra Blanca on the shores of a pretty bay. Historical Center Marbella is a typical Andalusian charm with a touch the moorish past that is passed through neatly whitewashed facades of houses decorated with flowers and orange trees that can be found on every corner. In the old the city

The heart of the old city is the square of Los Naranjos. In the center the square is a small orange garden and plenty restaurants under his crowns. On the square there are several interesting sights. The first one is the town hall. Was built in the 16th century and is an excellent example of Spanish style. Another attraction of Los Naranjos Square is the church Hermite de Santiago. This small church is the oldest in Marbella and remarkable modern sculpture of St. James The apostle

Another interesting area is the Plaza de Altamirano. Located in a quiet corner of the old town and fully conveys its atmosphere. This beautiful cobblestone square filled with old-fashioned palm trees street lamps and fancy old buildings. Church Encarnacion – the most important religious building Marbella The church was built in the 16th century by Catholic monks. on the site of a Muslim mosque. Distinctive feature of the facade – the main door, which is delicately carved from ocher stone in style rococo. Nearby is the charming chapel of Capilla de San Juan in Mudejar style. Nearby stands one of the two towers that were part of the old Arab fortress of the 9th century. Roman testimony The city’s origins are numerous archaeological monuments that can be found in the area, including: paleo-christian basilica vega del mar, roman baths in guadalmina or Villa Rio Verde. Santo Cristo – a historic church built by monks Franciscans in the 16th century. The facade of the church has stone details and octagonal roof of beautiful ceramic tiles. Puerto Banus is the most famous and fashionable marina in Marbella, located about 10 kilometers from the old town. Pier considered the best in Spain. Stylish restaurants and expensive boutiques go directly to the embankment. The restaurants have open terraces for perfect seaside atmosphere.

Marbella on the map of Spain