Malaga (Spain) – the most detailed information about the city with photos. The main attractions of Malaga with a description, guidebooks and cards.

Malaga is a city in the south of Spain in the autonomy of Andalusia. Was founded in the 8th century BC and is one of the oldest Mediterranean ports. Malaga is the heart tourist region of the Costa del Sol. City captivates the atmosphere of the old city, beautiful scenery, beaches and the sea. Malaga is also known as the birthplace of Picasso.

Malaga is located in the southern part of the Iberian Peninsula on west coast of the Mediterranean. Rivers flow through the city Guadalmedina and Guadalorce. The bay is surrounded by low mountains. The climate is Mediterranean. Summer is dry and hot, winter is mild and wet. 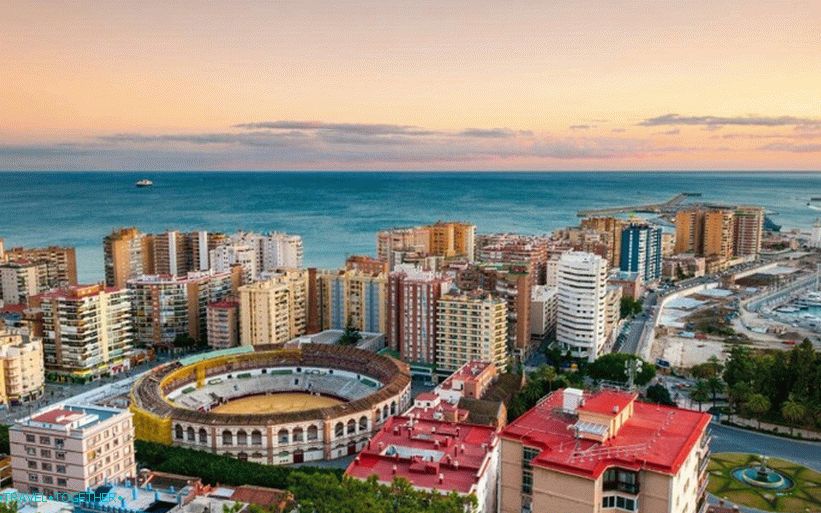 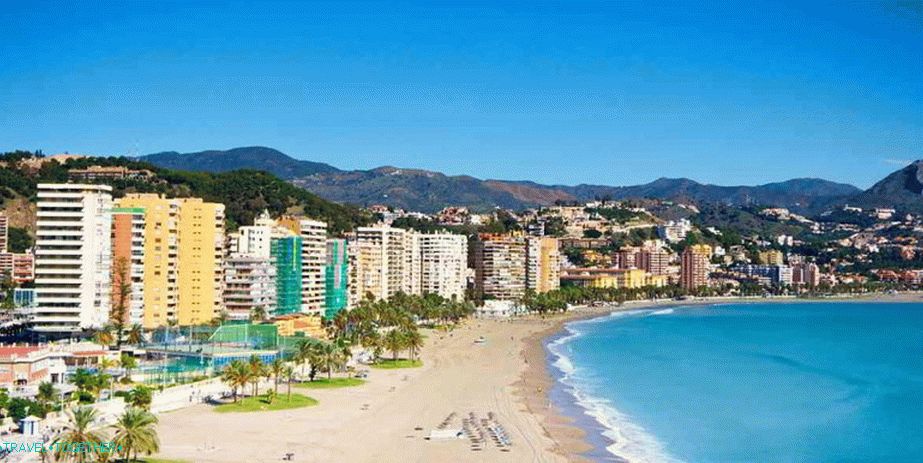 Malaga is famous for its beaches, the total length of which has about 14 km.

Malaga is one of the oldest cities in Europe. It was founded phoenicians in the first millennium BC. From the 3rd century to ours Malaga was one of the colonies of the Roman Empire. In the 5th century the city was conquered by the Visigoths, and in 6 by Byzantium. In the 7th century, Malaga was conquered by the Arabs, when it turned into one of prosperous cities of the Iberian Peninsula. In the 9th century, Malaga became the capital of the Muslim kingdom. At the end of the 15th century, the city was annexed to the Castilian Crown. At 19 century, Malaga is experiencing an industrial boom that turned it into one of the largest industrial centers of Spain. Another round development of the city occurred in the 60s – 70s of the 20th century, when steel the popular beaches of the Costa del Sol.

Malaga is one of the main transport centers of all Andalusia. The airport is located about 10 km from the historic city center. and is the fourth largest in Spain. Air terminal serves about 13 million passengers a year and connects Malaga with other major cities in Europe and the world. From the airport to the center can be reached by bus “A” and train (departure from the terminal arrival “3”).

The railway station Maria Zambrano in Malaga is one of the most important railway junctions of the south of Spain. Railway station located west of the old town. High-speed railway There is a message with Madrid, Barcelona, ​​Seville. Main the bus station is right across from the train station. Malaga has a regular bus service to most cities of Andalusia and the country.

Malaga is a great city for shopping. Main shopping street – Calle Marqués de Larios. Many shops can be found in the historic center. The market is located north of Alamada.Tax Free can be returned with the purchase of more than 90.90 euros.

Málaga offers a kitchen that mixes what gives spanish land and sea. Main ingredients of local dishes are fish and seafood, vegetables, meat and fruits. Most the traditional thing to eat in Malaga is espetos (fried sardines). In general, there are a lot of dishes, where the main ingredient is fried fish. Worth trying coquinas (clams in wine), local tapas, jamon and sweet wine. Tasty and inexpensive to eat in the port area and the eastern part the waterfront.

The most interesting sights of Malaga with photos. Cathedral or Nuestra Señora de la Encarnación – one of the best examples of Spanish religious art. Building located on the site of an ancient Muslim mosque. Cathedral started build in the year 1530. Construction continued until the 17th century. The north tower has a height of 86 meters and a viewing platform. The interior of this religious building is also impressive and contains several valuable works of art.

Be sure to take a stroll around the cathedral, where charming medieval streets.

Alcazaba – one of the main attractions of Malaga, ancient moorish fortress built on the ruins of ancient roman bastion. This fortified castle at the foot of Mount Gibralfaro designed with three contours of protective walls and 110 towers. The construction of the fortress dates back to the 11th century. Visitors can see some of the remaining mighty towers and walls as well visit a beautiful garden. Today it houses the archaeological Museum and Museum of Fine Arts.

On the top of Mount Gibralfaro over the Alcazaba stands the eponymous Moorish castle built on the site of an ancient Phoenician lighthouse. This fortified structure was built to house. troops and protection. Now Castillo de Gibralfaro is, for the most part, the mighty ruins with fantastic views of the port and coast. The most visible remains of the fortress are huge old trees. Inside the walls are fragments of buildings and courtyards, typical of Islamic architecture. 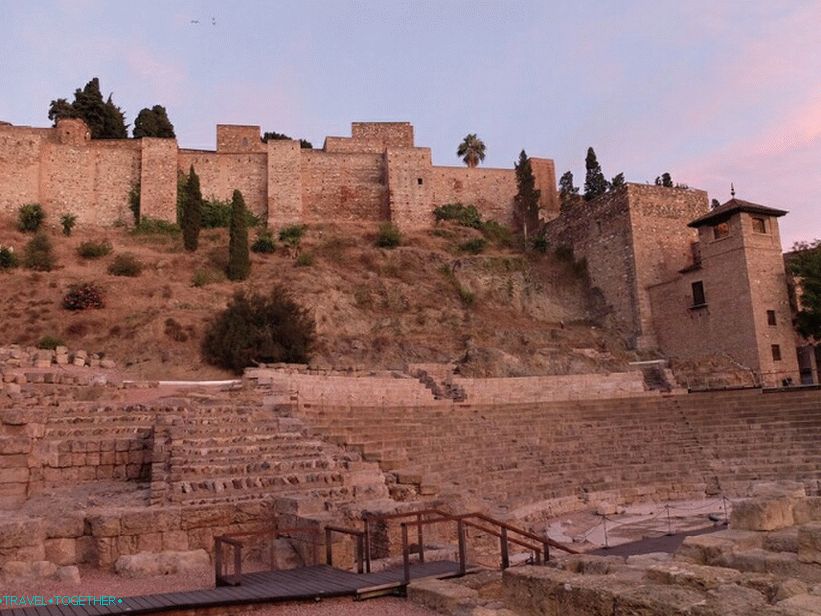 The Roman theater is the legacy of Malaga’s Roman past. Was built during the reign of Emperor Augustus in the 1st century AD. Operated until the 3rd century. The stands have a 31-meter radius and reach a height of 16 meters (13 rows). The theater was discovered in mid 20th century. The Picasso Museum is the home of the famous painter and at the same time a museum, where 233 of his paintings are exhibited. Like everyone lovers of modern art. The basilica Nuestra Señora de la Victoria is one of the most important Churches of Malaga, built in the 17th century in the Baroque style. Religious the building stands at the place where the Catholics besieged Malaga during the period Reconquista (the process of winning the Pyrenees from the Moors). Among the paintings and the sculptures adorning the basilica are distinguished by two sculptures by Pedro de Mena and the patron figure of the city of the 15th century. Sagrario – an old church of the 15th century with an impressive Gothic portal and beautiful altar. 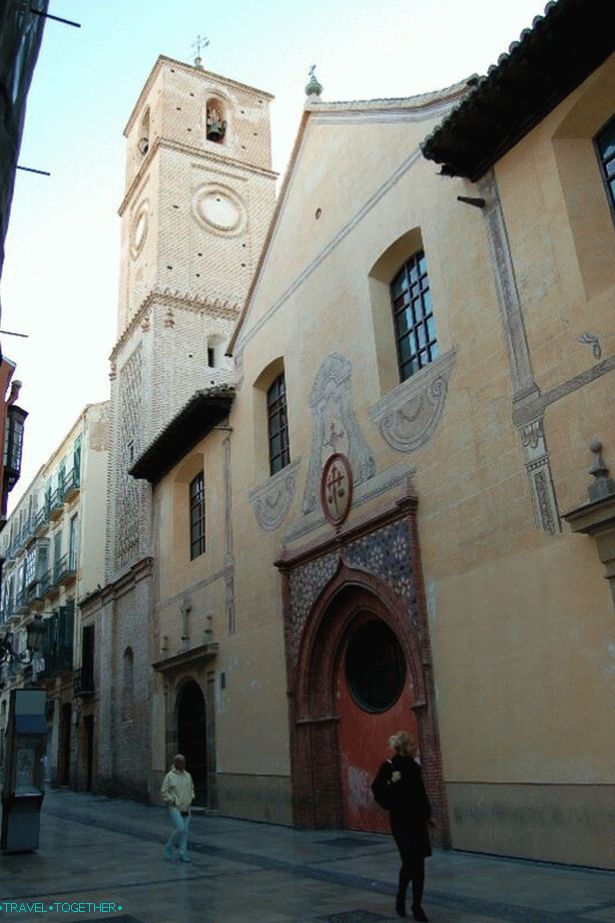 The church of Santiago is considered the oldest in Malaga. Its construction began in 1490 at the site of the mosque. The central entrance is made to Mudejar style. The square tower was completed in the 16th century. (initially it was conceived as a minaret). Inside there are three naves with valuable works of Alonso Cano and Nino de Guevara. Church of sv. John the Baptist – one of the oldest Christian Parishes of Malaga, founded in the late 15th century. Church was significantly rebuilt after the earthquake in 1680. Interesting, that the tower provides access to the side nave of the church. Street of sv. Augustine – one of the oldest streets of Malaga. After Christian conquests here were built palaces and houses of knights on the foundation of old Muslim buildings. Also here you can find Moorish quarter. Initially, the street was called Knight, but after the construction of the Augustinian monastery the name was changed. Episcopal Square is one of the main city squares. Here the palace of the 18th century bishops and a stone fountain of the same period 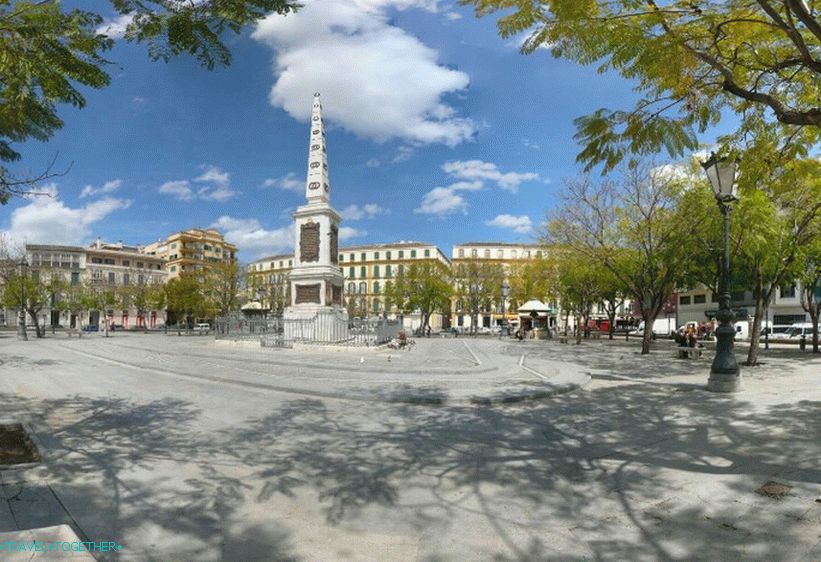 The Square of Mercy is one of the most beautiful squares of Malaga. AT the center is set obelisk. From the 15th century the market was located here. Also here did the first steps in the art of Pablo Picasso. 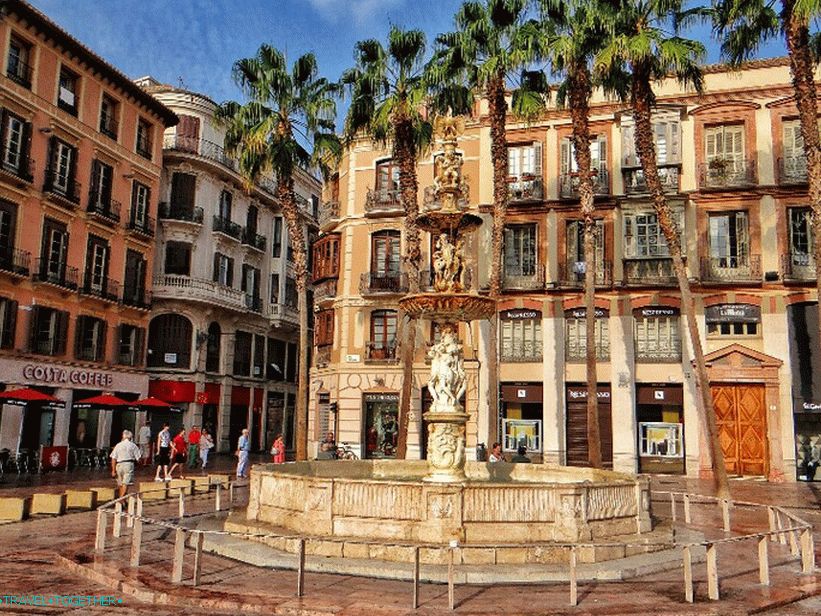 Constitution Square – was one of the centers of urban life with the moment of conquest of Malaga by Christians. Then she bore the name Four streets square. Here ends the main street of the city and City Hall, Augustinian monastery and a few more attractions.

Malaga on the map of Spain